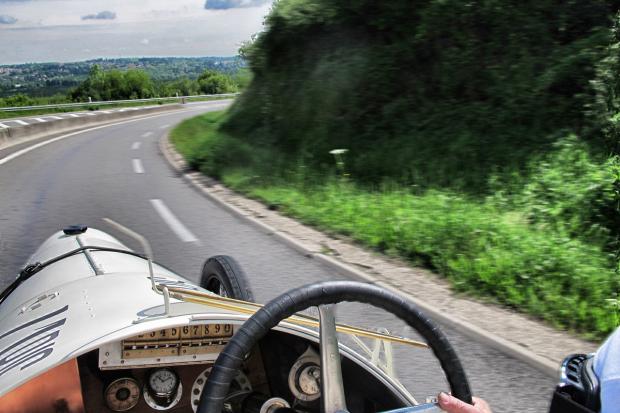 Once again these unsilenced, open-wheel leviathans roared down part of the circuit including the legendary Death Corner near Brignais.

Jochen Mass was enlisted to drive the factory museum's car, which was uprated in 1922 for the Targa Florio. “I love this car,” enthused the F1 and sports car legend. “It’s much nicer than an SSK to drive. The gearchange is fantastic, and the 4 1/2-litre 'four' really wants to rev.”

Wingard leads the historic rerun in the 1914 winner

French authorities made it impossible for the three cars to run the complete 37km road circuit but, after an early morning reunion outside the Place de la Poste in Brignais where pre-race scrutineering was held in 1914, the historic trio gamely battled with busy traffic to run along part of the fast home straight, plus the challenging downhill section to the famous hairpin and original start/finish at Les Sept Chemins.

The three cars will return to Stuttgart for a special exhibition in the Mercedes-Benz museum before a one-off public outing at the Goodwood Festival of Speed from 26-29 June.

Team Schnurrbart! Victorious Lautenschlager  (middle) with riding mechanic. They drove the Winning car to Lyon and home to Stuttgart

Lyon circuit featured 100 bends , most on the scenic stretch from Givors to Chateauneuf along the Gier river