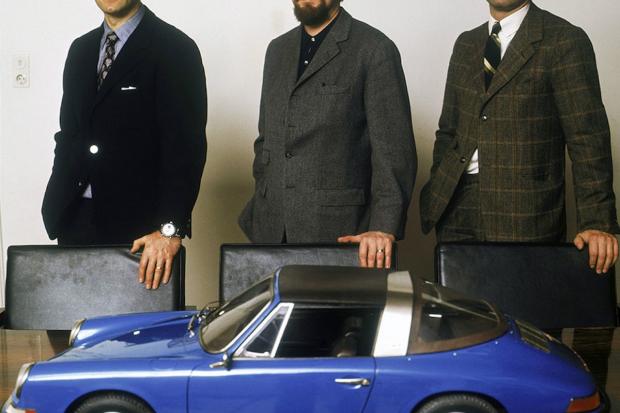 Ferdinand Alexander Porsche (in the middle in the main image), known as FA after his initials, died today in Stuttgart aged 76.

The third generation of the immensely talented engineering family to help revolutionise the world of motoring, Butzi's landmark design was the 911, though he also came up with the gorgeous 'sugar scoop' 904 (below).

Son of Ferry and grandson of Ferdinand, he took on his father's brief to add space and comfort to the 356 in helping to shape the benchmark 911 while still aged under 30.

Though his precise role and influence on the 911 is sometimes questioned, there is little doubting his role in the 904 which he stated was less interfered with than the previous model.

After Porsche, Butzi founded his own design company – he had studied industrial design at college but dropped out – dabbling in all manner of household items, but most famously making watches and sunglasses.

We have now received a touching memorial from Porsche and a couple of lovely photos to remember him by. We reproduce it here, unedited, in tribute:

Ferdinand Alexander Porsche was born on 11 December 1935 in Stuttgart and was the eldest son of Dorothea and Ferry Porsche. Even his childhood was dominated by automobiles, he spent much time in the construction areas and development workshops of his grandfather Ferdinand Porsche. In 1943 the family moved, along with the Porsche brand, to Austria, where he attended the school in Zell am See. After returning to Stuttgart in 1950, he attended the Free Waldorf School. After leaving school, he enrolled at the prestigious College of Design in Ulm.

In 1958, F.A. Porsche, as he was called by his colleagues, started in the design office of the former Dr. Ing hc F. Porsche KG. His great artistic talent was soon demonstrated, as he modelled the first plasticine model of a successor to the 356 series. In 1962 he became head of the Porsche Design Studio and a year later made a worldwide sensation with the Porsche 901 (or 911). F.A. Porsche created a sports car icon, as the timeless and classic design continues to live on the seventh generation 911 model today. F.A. Porsche also designed other iconic models -  among his most famous designs include the Formula 1 race car type 804 and the Porsche 904 Carrera GTS, which today is considered one of the most beautiful racing cars ever.

When Porsche KG was made into a limited company in 1971/72, Ferdinand Alexander Porsche, along with all other family members retired from the business operations of the company. In 1972 he founded the "Porsche Design Studio" in Stuttgart, the headquarters relocated in 1974 to Zell am See in Austria. In the following decades, he designed a number of classic men's accessories such as watches, eyewear and writing instruments under the brand name "Porsche Design" gaining worldwide notoriety. In parallel, he designed with his team under the brand "Design by FA Porsche" a variety of industrial products, household appliances and consumer goods for internationally known clients. F.A. Porsche enjoyed a reputation as a designer, to be a functionalist. A strong and clear line is typical of all product designs that have emerged from his design studio. "Design must be functional, and functionality must be translated into visual aesthetics, without gimmicks that have to be explained," was the credo for his design work. F.A. Porsche: "A formally coherent product needs no embellishment, it should be increased by a mere formality." The form should be presented to understand and not distract from the product and its function. "Good design should be honest," was his conviction.

Ferdinand Alexander Porsche received numerous honours and awards both for his work as a car designer as well as for individual designs.  The "Comité International de Promotion et de Prestige" was honoured  to him in 1968 for outstanding aesthetic design of the Porsche 911, while he was chosen as the Industrie Forum Design Hannover (iF) 1992 "award winners". He earned the title of professor from the Austrian Federal President in 1999.

Ferdinand Alexander Porsche was a Porsche AG shareholder and board member. From 1990 to 1993, F.A. Porsche held the role of supervisory board chairman and thus had large share of the economic turnaround of Porsche AG. In 2005 he handed over his mandate to his son Ferdinand Oliver and took the position of honorary chairman of the supervisory board.

An official memorial service will be held in Stuttgart at a later date.