Paying for patina is one thing, but shelling out for rust is another 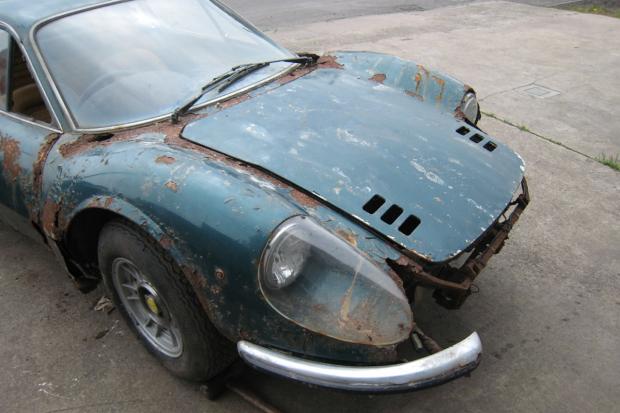 Yesterday, one of the contributors on our Facebook page (check it out here, it's fun) came up with a phrase that perfectly encapsulated what has become for me the most troubling and illogical aspect of the current classic car boom.

Responding to a post about the "rotten as a pear" (copyright Silverstone Auctions) Dino 246GT that somehow romped to £130,000 on the crest of a paddle wave of hysteria, Simon Powell wrote simply: "Rust is increasingly being considered as patina. Bonkers."

And in that simple sentence, Simon summed up an anomaly that I just can't get my head round.

Yes, we all know there is a certain romance to barnfinds and we all go a little weak at the knees over them, by when exactly did an outright scrapper become as desirable as a lovely, original car or even a freshly restored minter?

We are not talking historically important classics here, just cars that are rotten and their only value is in their log-book. We all accept the arguments for unmolested, low-mileage originals being more desirable, but even if these cars do fit that description, they won't be for long because they will have to have a nut and bolt resto and rebuild – and have probably another £100,000 spent on them – before you could get within 10ft of them without fear of catching something unpleasant. To make these cars driveable and legal, every last trace of that originality will have to be wiped out.

And if you are thinking that the Dino can't have been that bad, check out the comprehensive catalogue pictures here.

Oh, but then it might have been a one-off. Not at all, it is far from the only example of this epidemic.

It first started to worry me when a 1965 Ferrari 330GT 2+2 soared to £68,700 at Bonhams' Harrogate sale in 2012. At the time, that was the price you would expect to pay for a nice running and road-legal example. If you don't believe me, read the comments from marque guru Paul Baber on ferrarichat.com

The only possible reason I can imagine for paying that kind of money was so that someone didn't have the guilt of cutting up a usable example to make their short wheelbase or GTO rep.

For the sake of balance, there is another side to this coin, like when a trio of Mercedes-Benz 300SL Roadsters came up at the RM and Gooding Amelia Island sales earlier this year. A fully restored 1957 example sold for $946k (above), a similarly well-restored 2012 concours winner boasting Natalie Wood as a former owner – and one of only 25 Rudge wheel Roadsters – came in at $1.842million and yet, topping $2million to put the others in the shade was a 1964 example which, as well as having disc brakes and alloy block, was an exceptionally original car. It wasn't shiny and perfect, but it was gorgeously unrestored.

See, that kind of makes sense, unlike the Scottsdale madness a month earlier.

This time both the cars were at Gooding. Now, admittedly the single-family ownership for 50 years made the 1956 'Gullwing' appeal as did its originality, but that was tempered somewhat by the pictures that showed its distressed interior and the information that it had been off the road since 1983 and therefore would more than likely need a complete rebuild. Although that would have put me off, it didn't have the same effect on everyone and someone shelled out a whopping $1.897m for it.

In isolation that might not have seemed so barmy, but a few lots later another 1956 Gullwing came up for sale. This one also boasted a 50-year stretch of single-family ownership, had the fitted luggage and belly pans and had been fully restored to concours condition. The price? $500,000 less.

And now that Dino, it just doesn't make sense.

So, yes, it's true, out and out investors piling into our market is currently having a significant effect and pushing prices beyond control, but I can't believe they are behind this phenomenon. Investors don't want to get their hands dirty, they tend to go for cars that someone else has already spent the money on and won't cost them anymore in their brief ownership that the electricity to power a Carcoon. Also, some of these purchases are so downright inexplicable, that you can't imagine someone who makes their living from making money would go anywhere near them.

No, as far as I can see, there are only two possible explanations: someone who so dearly wants a particular classic as a forever car that the money is irrelevant and, panicking that the state of the market means they will never have one, grabs the only one they can still afford with the intention of painstakingly rebuilding it if and when they can and loving it till their dying day. Or the world is full of idiots. I'm not a betting man, but...