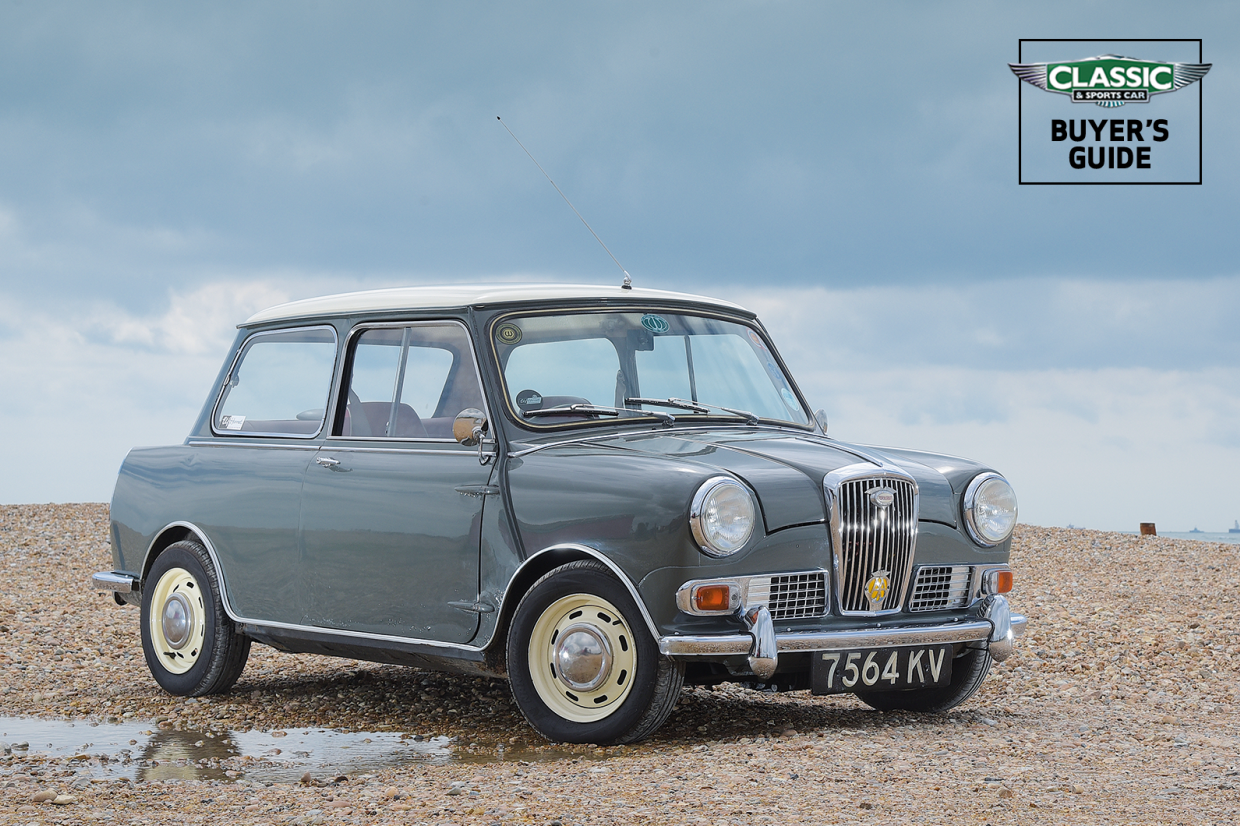 Why you’d want a Riley Elf or Wolseley Hornet

Brand loyalty was a significant factor in the 1950s car market – but mass production was essential to keep costs down.

Struggling to hold on to faithful customers of its once-proud independent brands, the unwieldy British Motor Corporation resorted to ‘badge engineering’ its volume models as multiple car ownership per household increased, hoping to attract wives, sons and daughters to buy a Riley or Wolseley ‘like Dad had’.

With the Mini variants, the cars had the advantage of extra boot space over the base Austin and Morris – though Mini designer Alec Issigonis was less than impressed with the 8.5in extra length added to his packaging miracle. 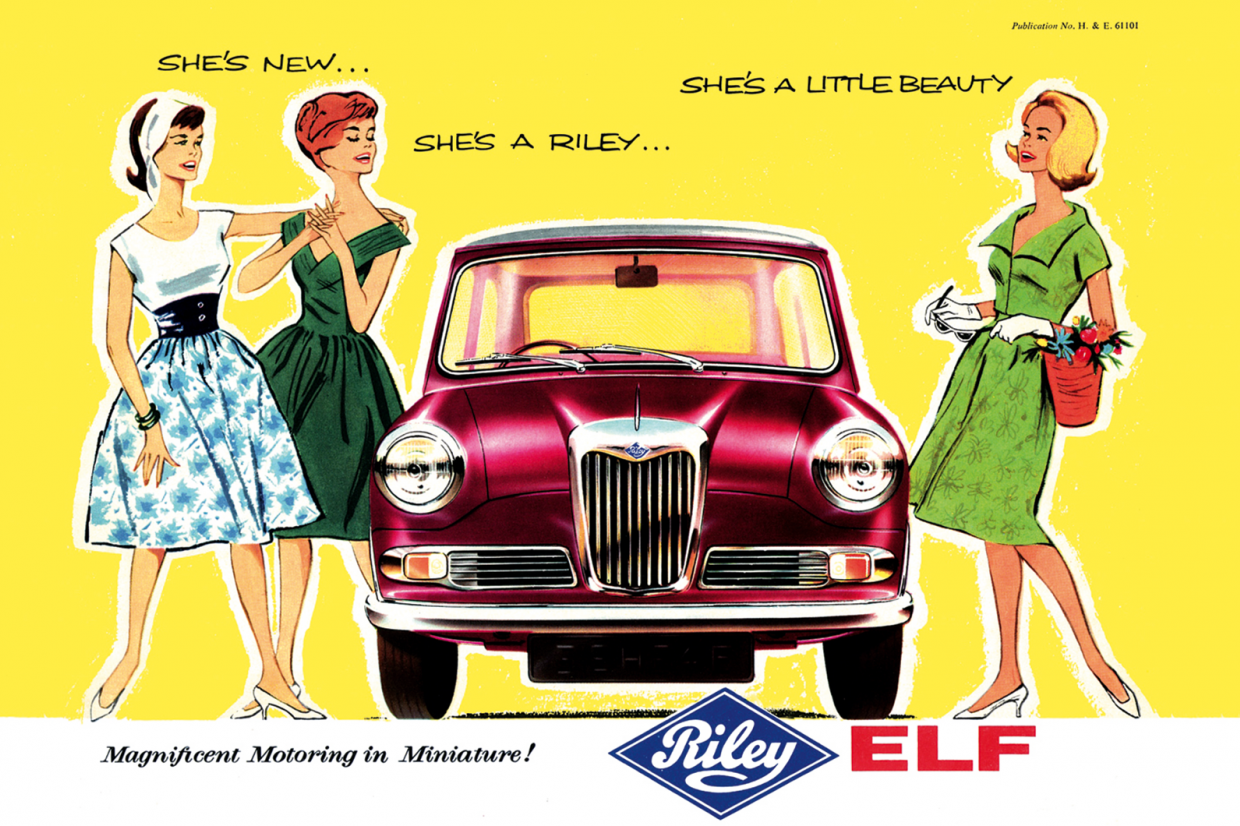 Period catalogue for the Elf has dated slightly

The two cars sold in very similar numbers, with the slightly more expensive Riley marginally more popular than the Wolseley. Unlike the ADO16 series, in which the Riley Kestrel had twin carbs and significantly higher performance than the Wolseley version, the Riley Elf and Wolseley Hornet shared the same single-carb power units.

The differences between them were instead purely cosmetic – trim, grilles and badging, with a bit more wood and leather in the Riley than its cheaper sister. Performance differences come between the 848cc Mk1 and the 998cc Mk2/3, with significantly increased torque making the later cars more flexible to drive.

However, you’re more than likely to find the car you’re viewing has a different power unit to factory specification by now anyway. The Wolseley here has a 1275cc engine, along with other modifications carried out when it belonged to Peter Mitchell OBE, founder and MD of the British Motor Industry Heritage Trust.

Personalising is hugely popular when it comes to all models of Mini, and the booted cars are certainly no exception. There are more differences from the standard Mini than you might expect: the rear window is smaller, so its chrome surround trim is hard to find; the rear pillar external seams are eliminated; and the opening rear quarterlights with piano hinges are extremely rare.

The front slam panel, the rear valance panel, the chrome grilles, bumpers and overriders, the bonnet spears, the chrome side and front trim strips, and even the exhaust system, are all unique to these cars and are difficult or expensive to find.

Rot, and owners’ personal taste changes, are likely to be your biggest obstacles.

Riley Elf / Wolseley Hornet: what to look for 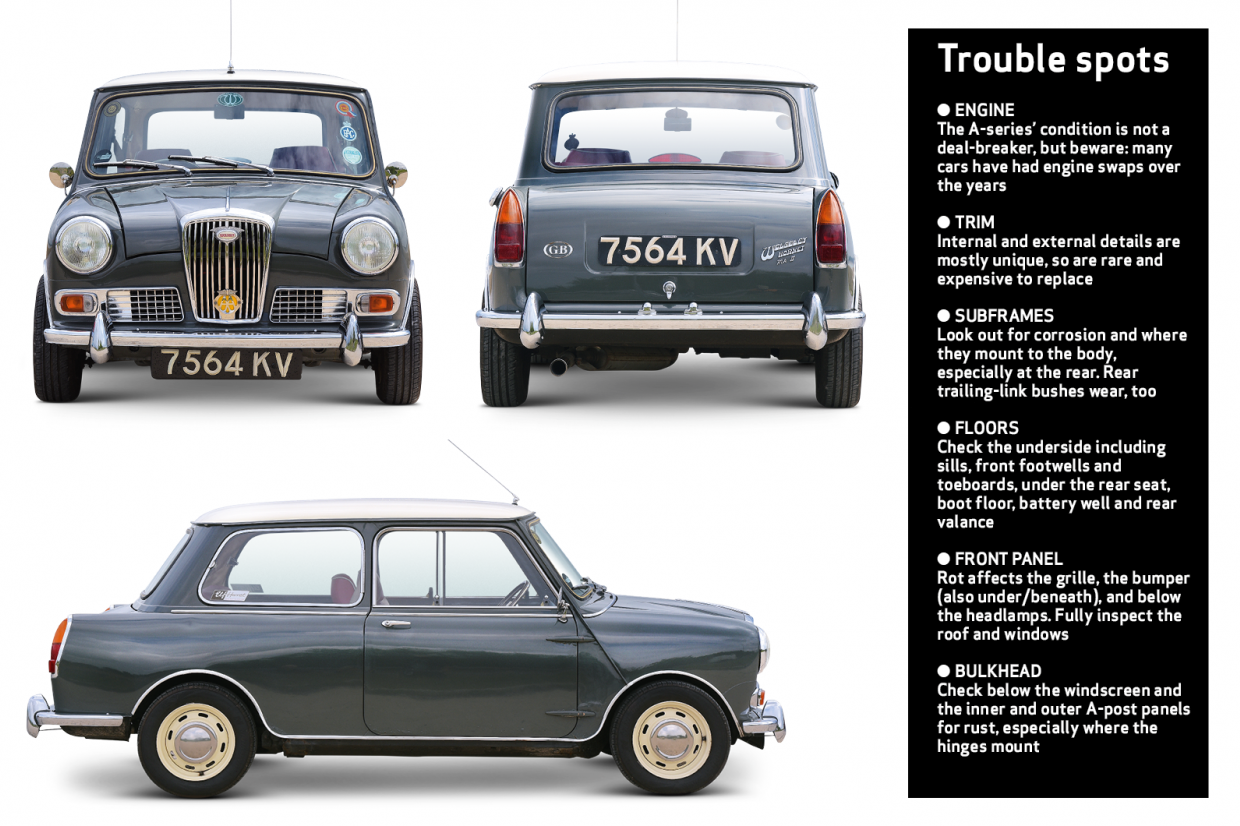 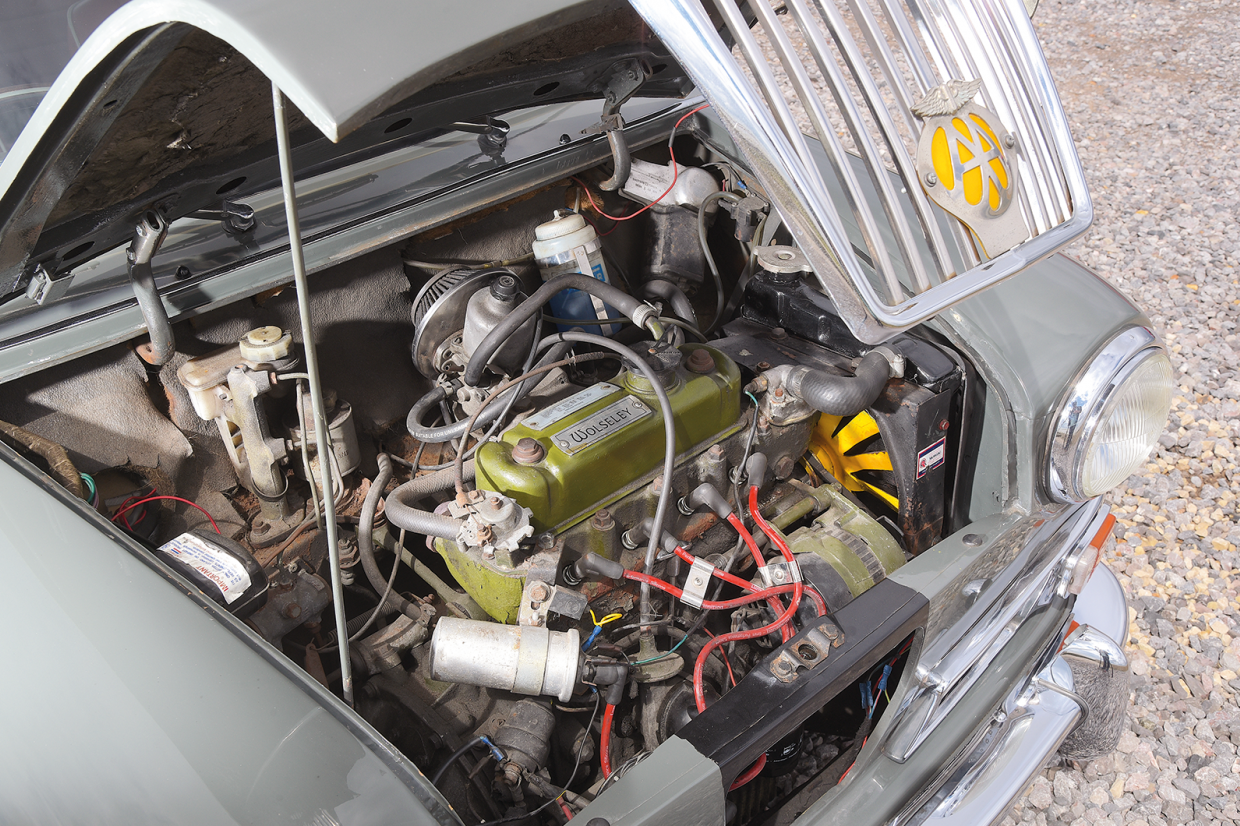 The alternator and carburettor are indications that this is a later engine, but otherwise the A-series changed little between 848cc and 1275cc. Cast-iron head means valve seats recede on unleaded fuel above 3000rpm, but most now have an exchange head with harder seats: an inexpensive and easy swap. 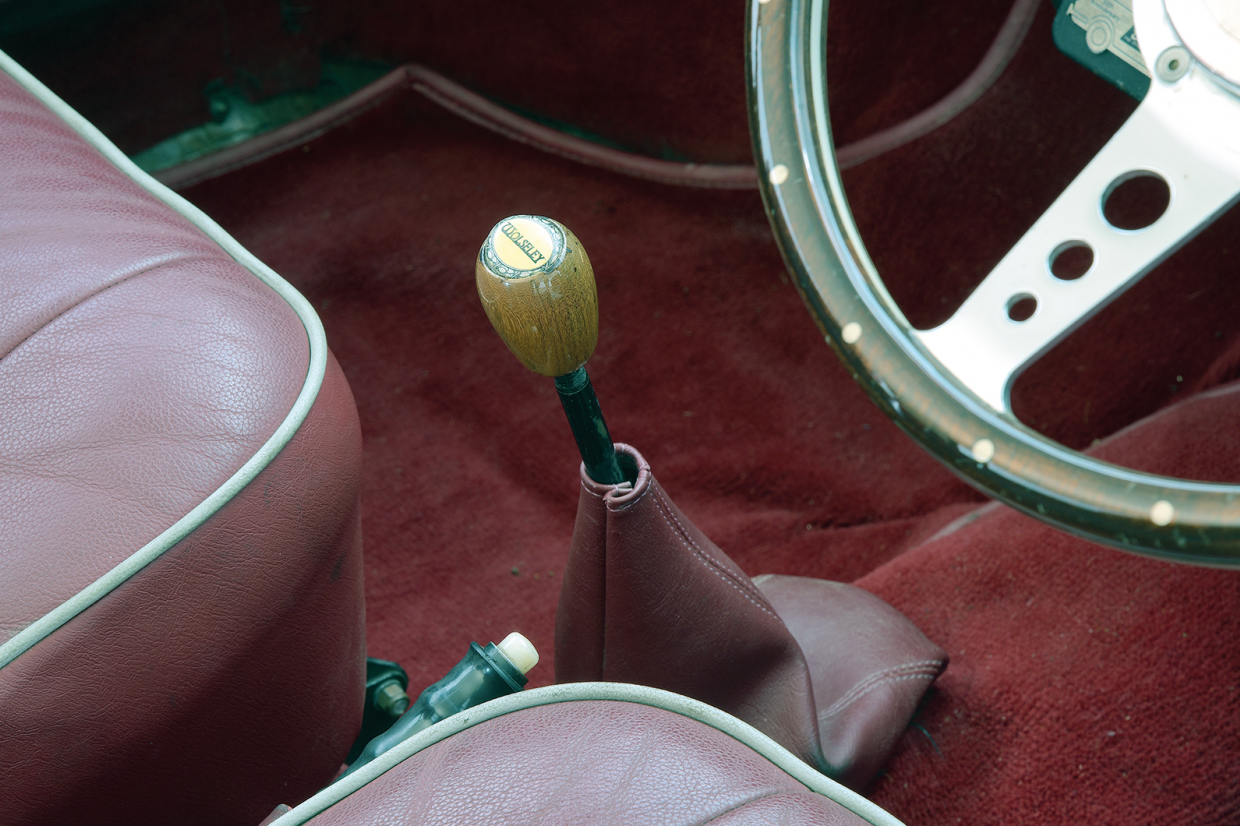 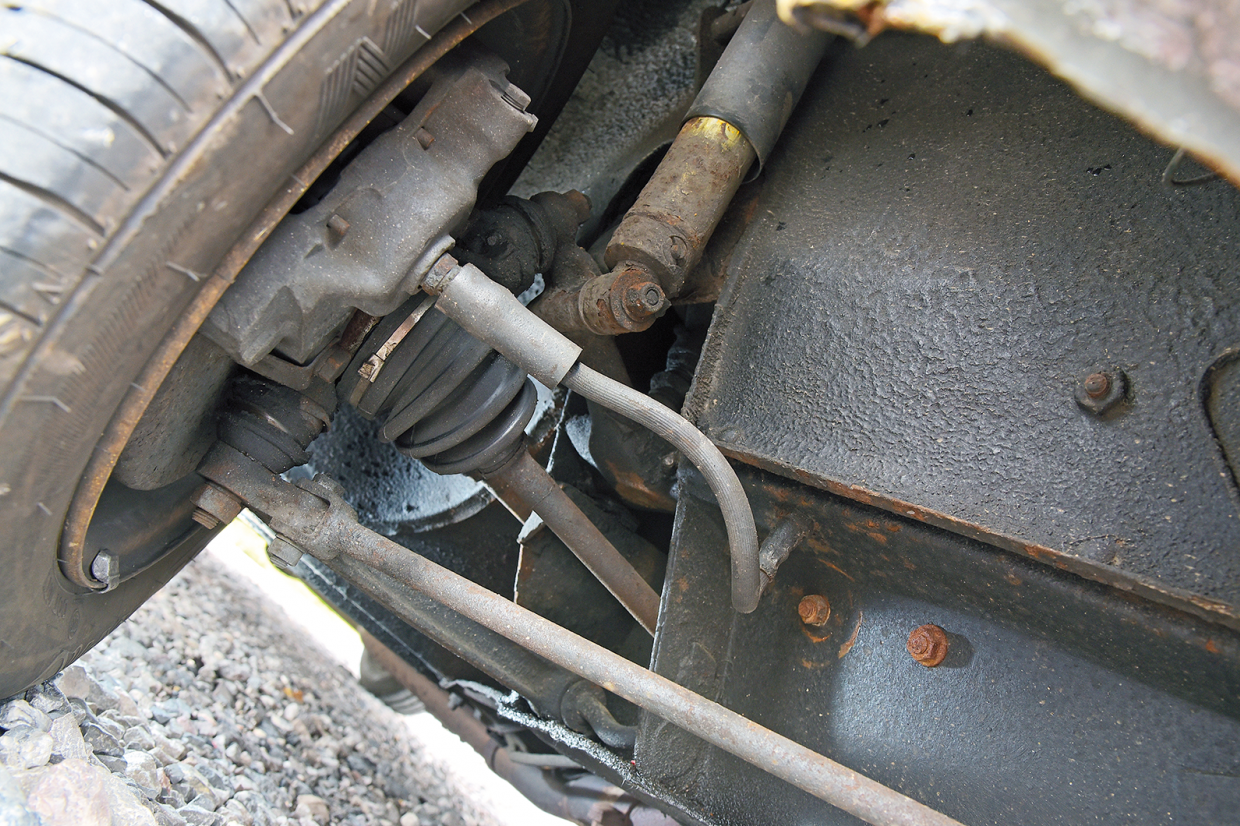 The in-the-sump transmission benefits from frequent oil changes: check for jumping out of second gear and rumbling in the lower ratios.

12in wheels give better clearance and higher gearing; disc brakes are preferable. Standard drums are fine for 10in wheels, if well maintained. 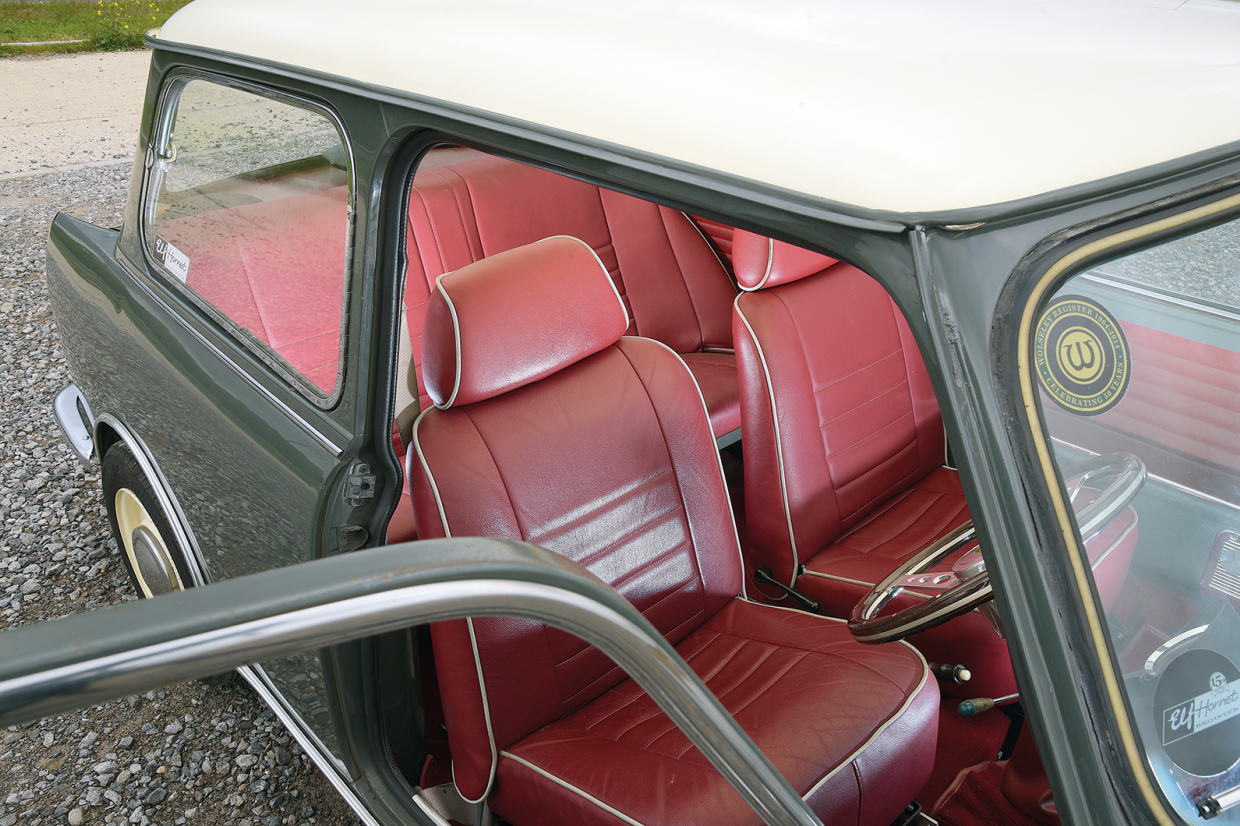 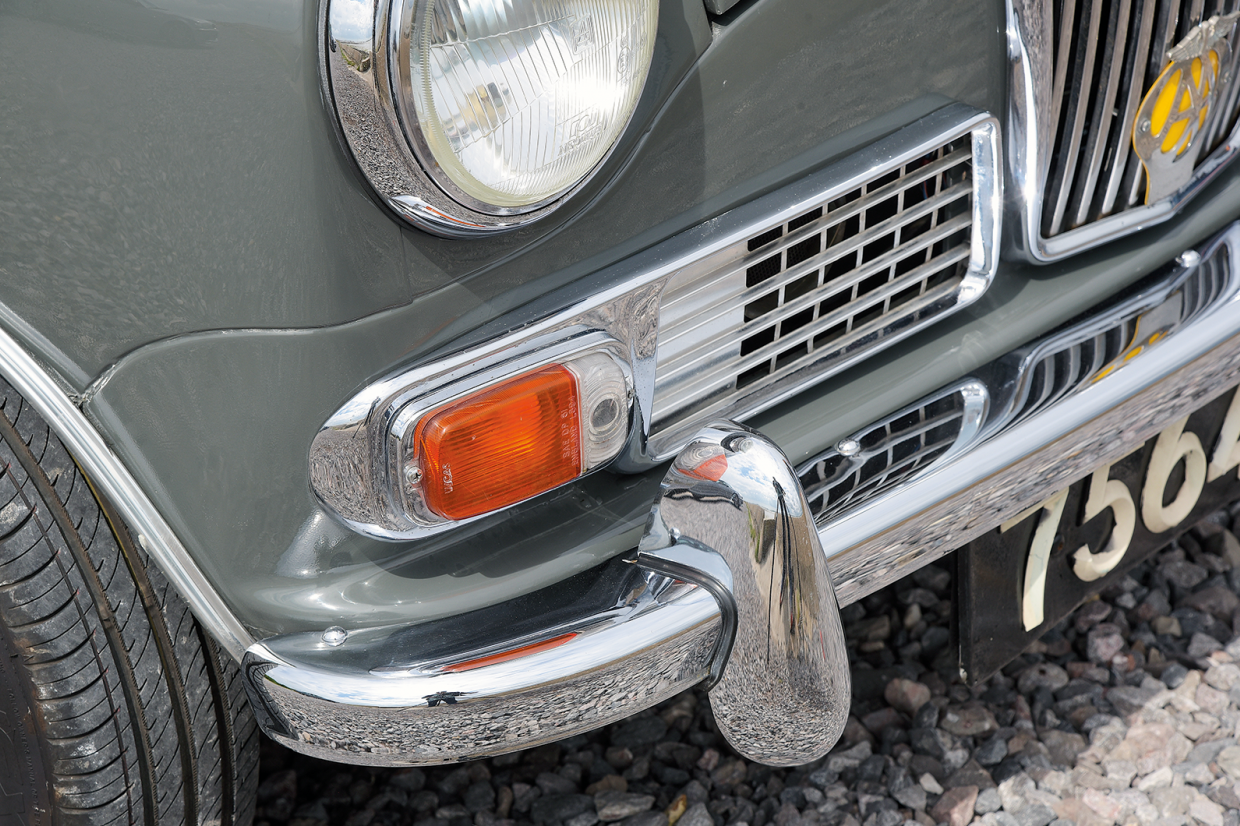 Although fitted with later, more supportive front seats, this interior is more original than many, with Cardinal Red trim and carpets.

Unique parts, such as chrome grilles and bumpers, are extremely hard to find now so beware of incomplete projects or cars with missing trim. 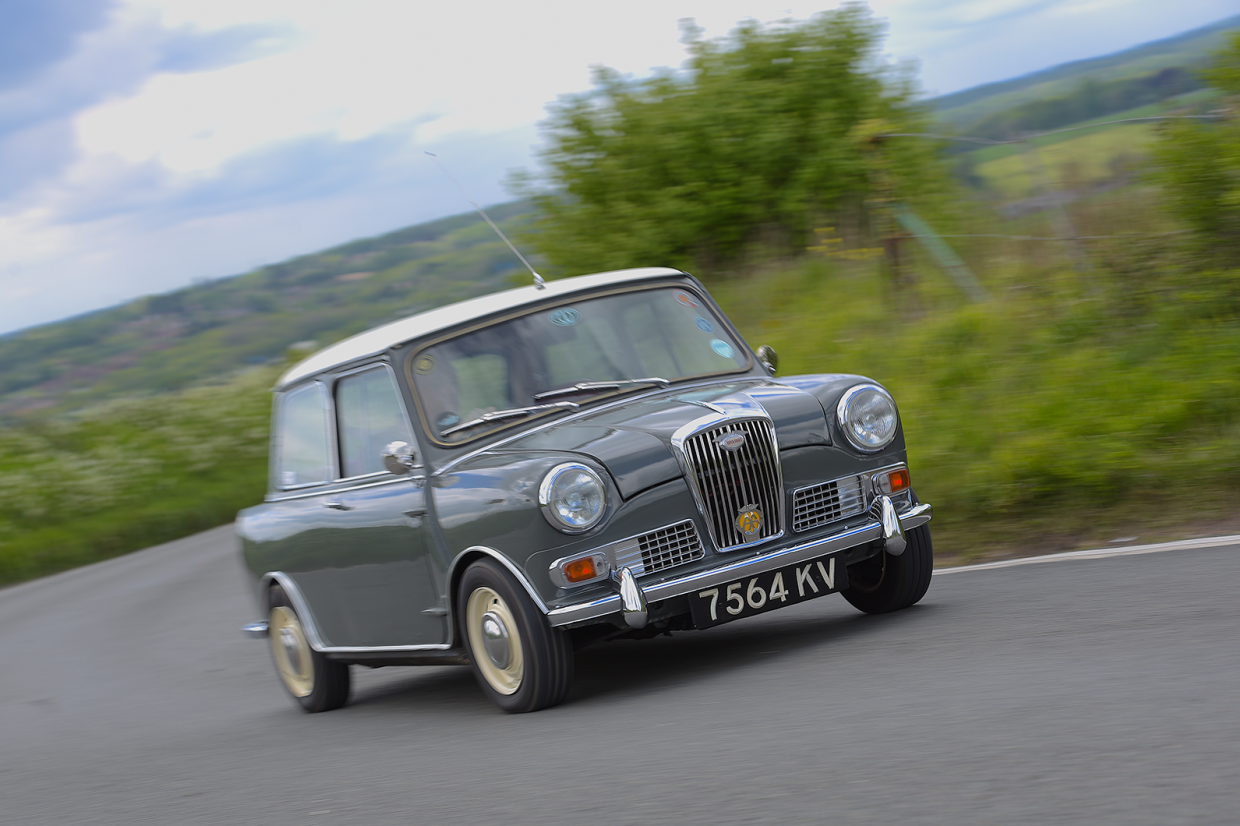 The Elf and Hornet combine the famous Mini handling characteristics with that little bit more comfort, and offer the opportunity for tweaking

Engines get rattly, oily and smoky when worn, and it’s worth budgeting for an unleaded conversion if it’s not been done. Cooling gets marginal as the side-mounted radiator silts up over time, and the water pump can leak. Check for oil in the water and emulsion under the oil filler cap: a new radiator and head gasket is not a big job.

Clonking and shuddering when taking up drive is probably just stabiliser bushes and engine mountings, which is an easy fix. Dirty oil is bad news for the gearbox as well as the engine – some chatter from the gearbox at tickover is acceptable, but loud rattling when driving means a worn bearing that could wreck the casing.

Automatics are an acquired taste but usually durable and certainly a boon in traffic. Check the manual override selects promptly and be wary of rough changes.

Rubber suspension gives a firm and bumpy ride; Hydrolastic is more compliant and can still be pumped up by many garages if required, due to its use on MGFs. Check for leaks and rusty pipework, though.

Extra soundproofing and improved trim made the cars more comfortable than the standard Mini. There’s heaps of potential for tuning/uprating and most cars have been modified to an extent, but make sure it’s been done well and comprehensively – including better brakes to cope. 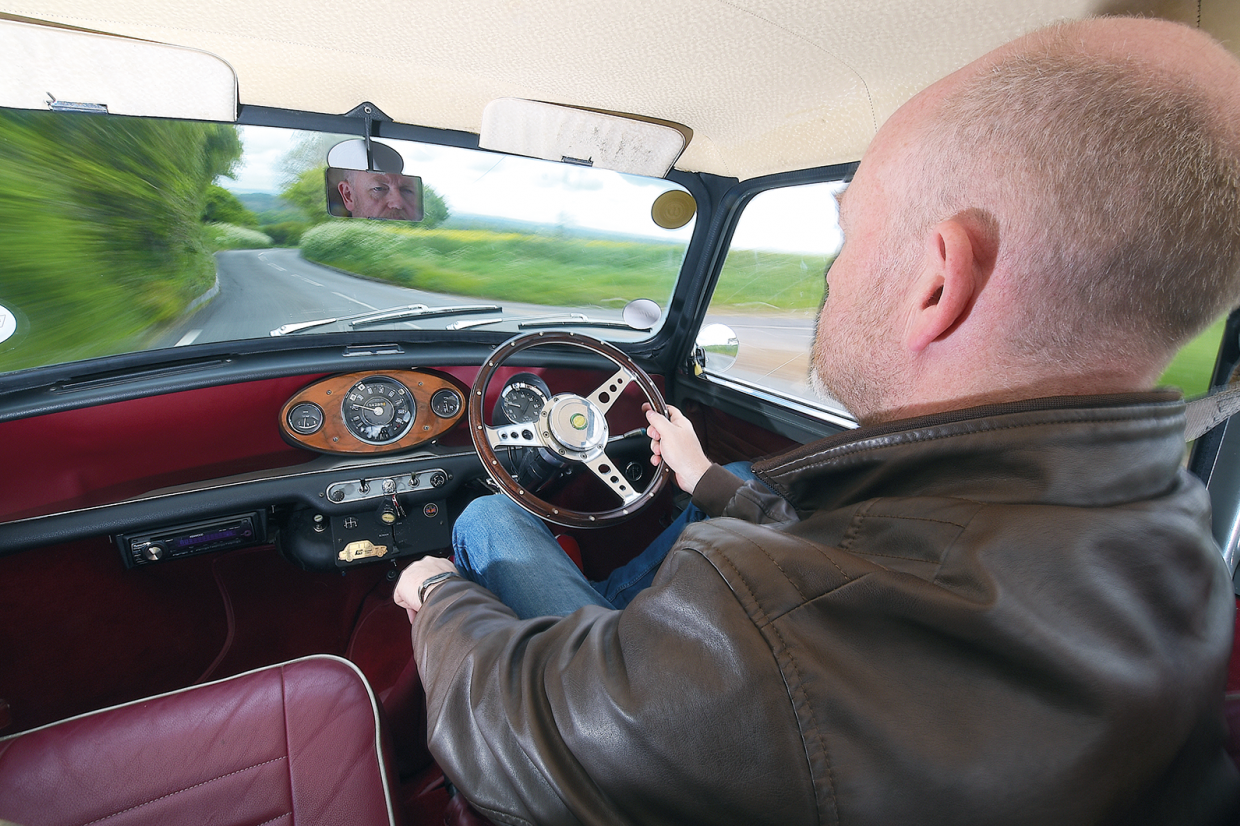 “I’ve had lots of classics,” admits artist and actor Jason Christopher. “I only have this one now, it’s my everyday car and lives outside. It has character – you can take it to Mini shows and have something a bit different. “I met my wife because she had an Elf; she popped up on the Elf-Hornet forum and I thought, ‘OK, this is more like it!’ We had a Heinz 57 Hornet as our wedding car.

“I used to have a concours Elf the same colour as this, but I kept this one because the Mk2s are now so rare. Peter Mitchell made it very usable with the 1275cc engine, disc brakes and 12in wheels. It has Mk2 Mini seats, Cardinal Red to match the interior, because I need the support following a back injury. I’ll be getting the A-post panel replaced later in the year.” 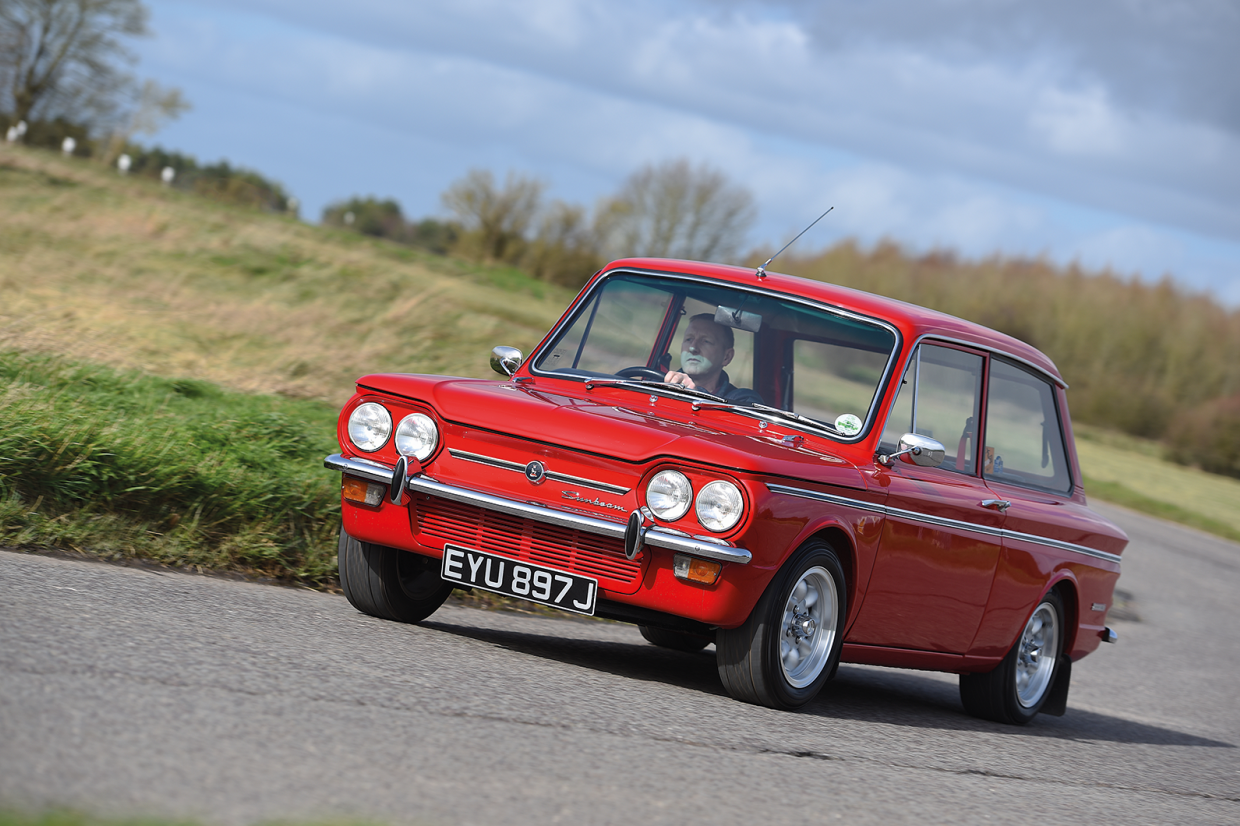 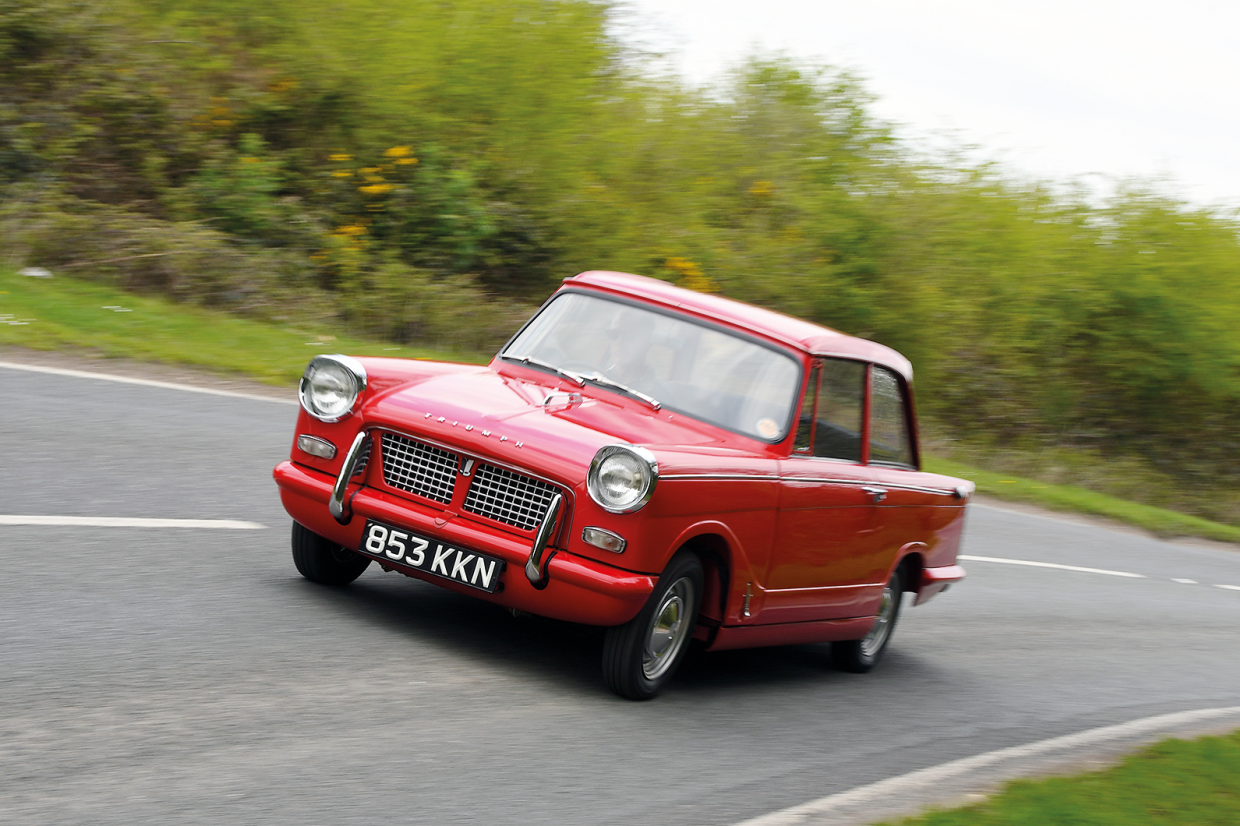 Rear drive, separate chassis, a bigger boot – and similar performance. Rot is easier to fix, and parts are available. 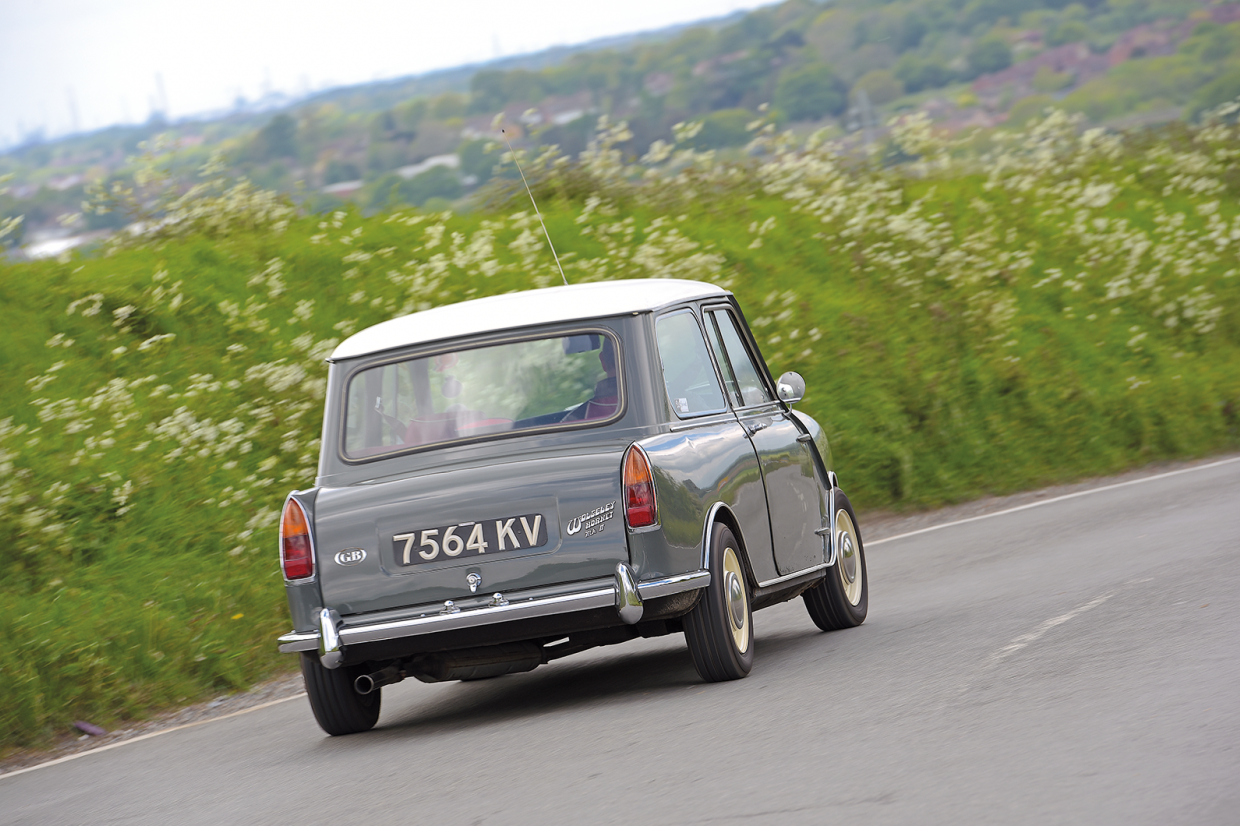 Offering all of the Mini’s great attributes but with additional quirkiness and individuality, the Elf and Hornet have much to offer. They are easily boosted with more performance, too. Choose carefully, though, because there are lots of rusty and poorly repaired or restored examples out there, and plenty where personalisation has resulted in the loss of many rare original parts. This can be difficult and costly to put right.

Characterful, practical and extremely cheap to run, with all service parts (except exhausts) shared with standard Minis

Rust can be extensive and very expensive to eradicate properly. Some panels are unique and pricey, so too is most of the bright trim