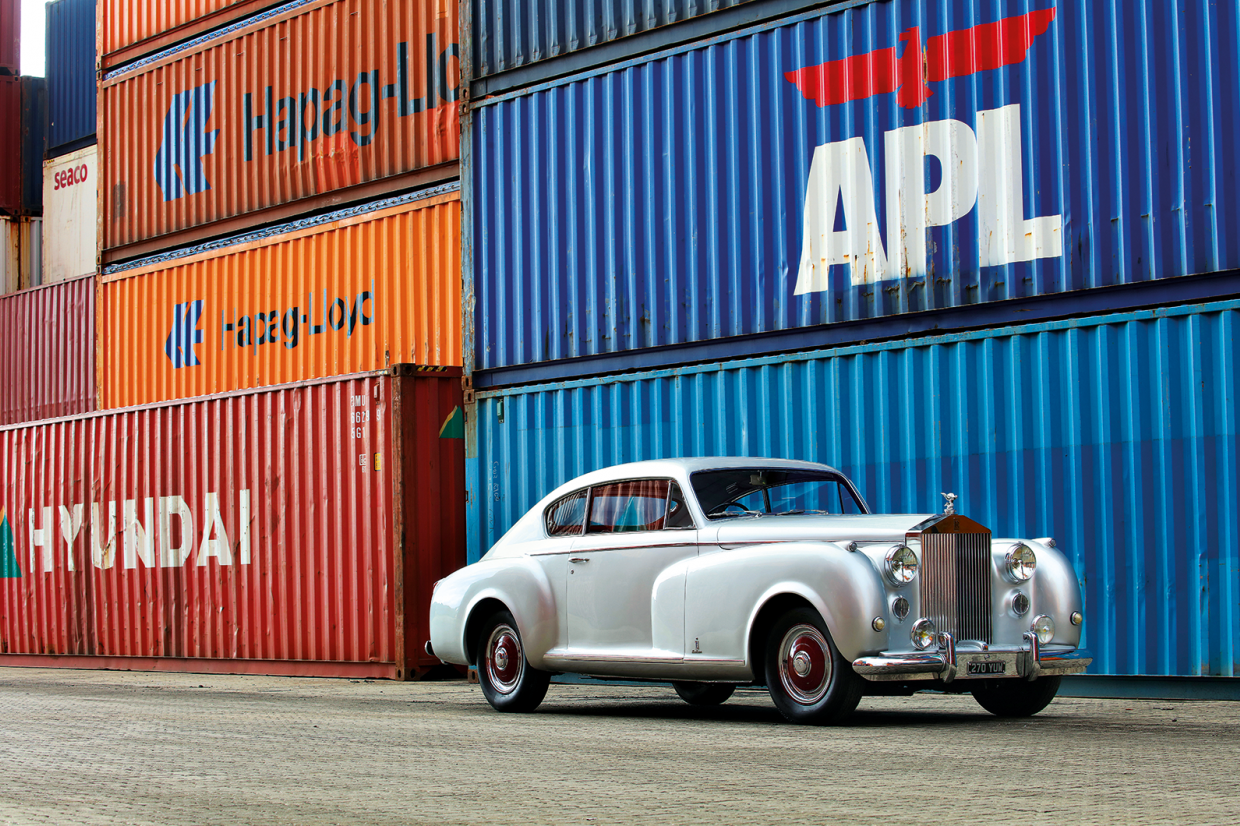 Not much is known about Commendatore Luigi Bressani, other than that he lived in Milan and was very rich; wealthy enough to spend the equivalent of £10,000 (£316,000 in today’s money) on a single automobile for his personal use.

The car in question was not merely transportation but a Rolls-Royce Silver Dawn with a one-off two-door coupé body by Pinin Farina of Turin.

It was, reputedly, the most expensive car in the world in 1951, twice the price of the HJ Mulliner R-type Continental fastback of the following year. 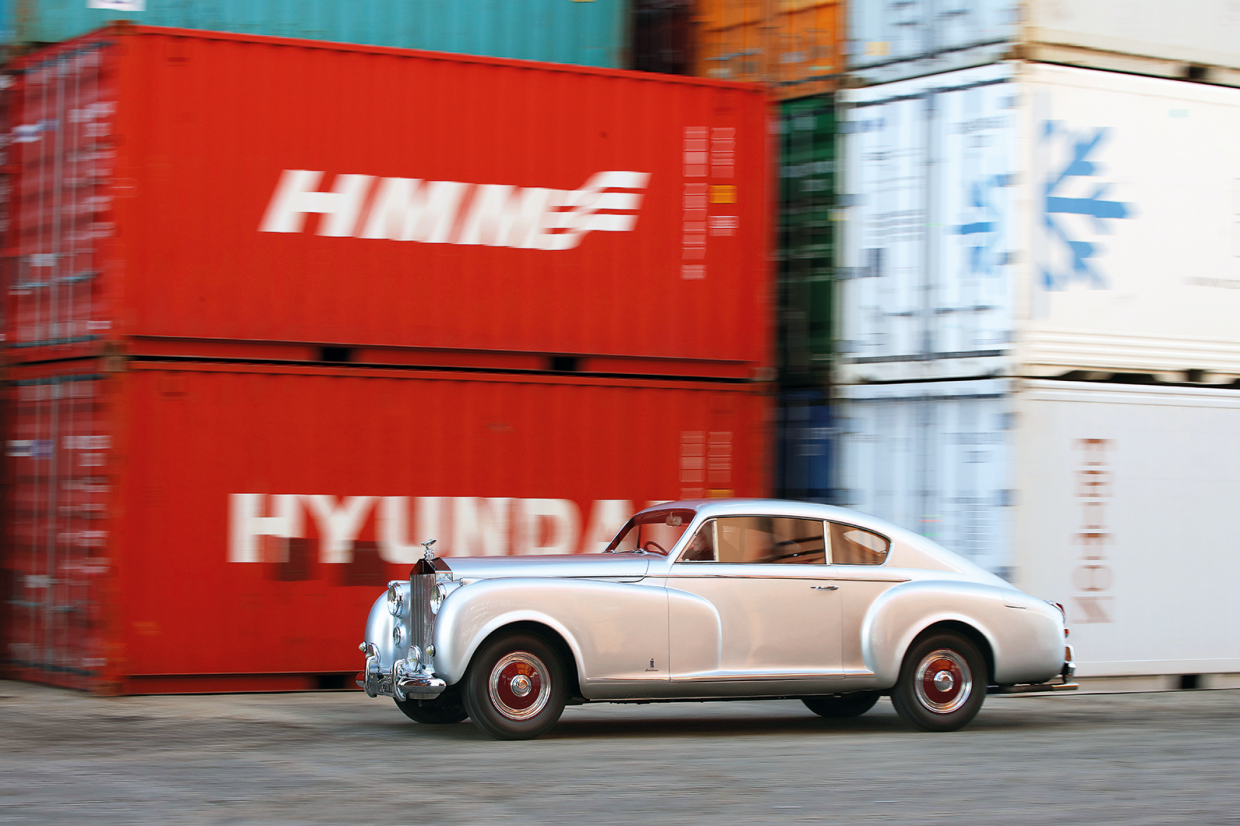 The idea of a Bentley sports saloon was already well established by then.

Five Pinin Farina MkVIs were built, the round-shouldered grille lending itself more readily to the sleeker, full-bodied forms the Italians were evolving throughout the 1950s.

The results were mixed, a telling commentary on how even Farina struggled to reinterpret this very English idiom.

For instance, his slab-sided 1949 effort on the MkVI (later produced under licence in a short series by Facel Métallon in France as the Cresta) has travelled much less well than the beautiful, one-off 1954 R-type Continental built by Farina for Charles Attwood (C&SC, May 1988).

In between came a less happy 1952 R-type Coupé with lines closely mirroring ‘our’ Pinin Farina Dawn, but with its headlights placed awkwardly on the outer extremities of the wings and a wraparound rear ’screen. 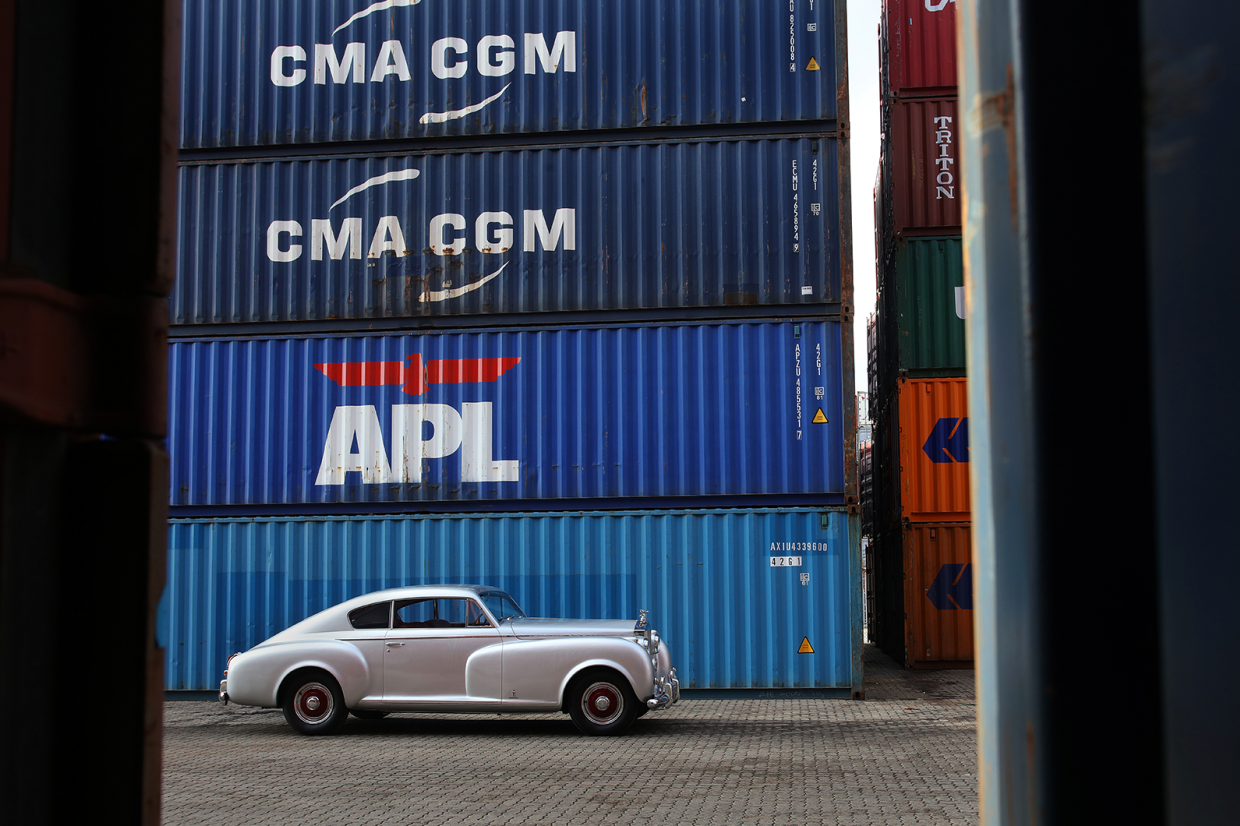 The standard production Silver Dawn, introduced at the Toronto World’s Fair in 1949, was the first Rolls-Royce to be offered with left-hand drive from the factory since the Phantom II; it was also the first to have fixed shutters on its radiator.

To date, it is still the firm’s most compact production model and was promoted as an ‘owner-driver’ Rolls-Royce, which in Standard Steel saloon form would be an exclusively export model until 1953.

Of the 761 Dawns built through to 1955, just 64 were coachbuilt; of those, only the Farina car and one each by Chapron and Ghia – neither a pretty sight – were bodied outside the UK.

Chassis SCA43, fitted with engine S90A, was ordered through the Italian Rolls-Royce agent Mastorelli of Rome, invoiced at £2020 (a mere £200,000 accounting for 70 years of inflation).

It was laid down at Crewe in the summer of 1950. Delivery to the shipper was promised in June, although it wasn’t actually handed over to Farina until the end of August, travelling via Dover and Dunkirk en route to Turin. 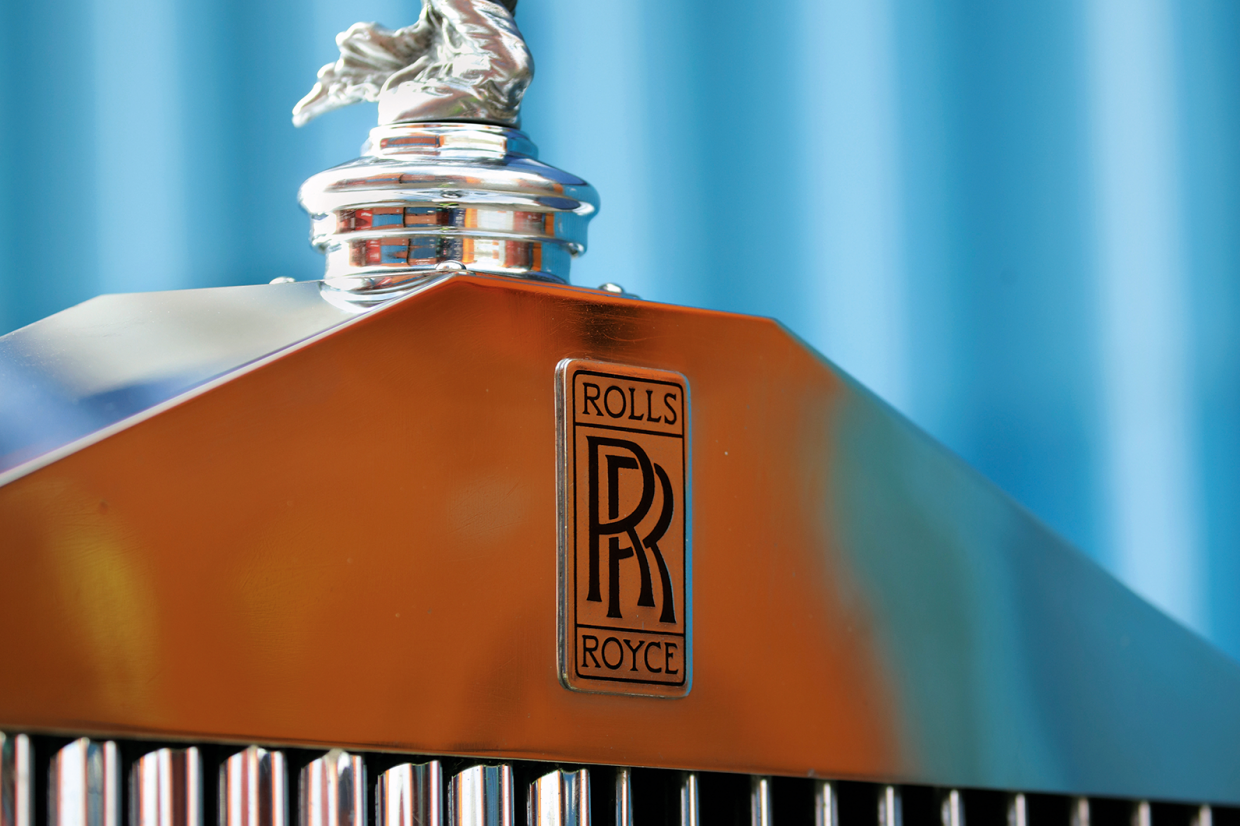 It was specified with right-hand drive – still common in Italy, even though they drove on the left – a radio, kph speedometer, double-filament headlamps and split-skirt pistons.

The chassis was supplied complete with bulkhead, radiator, hubcaps, tools, instruments and floors.

Chassis cards for the car even specify the type of battery fitted (Exide) and the serial numbers on the leaf springs.

It being of the SCA series, the coachbuilders at Corso Trapani would have been presented with a chassis of the earlier riveted construction type with a right-hand floor gearchange.

Left-hand-drive Dawns had a rather superior form of column shift; automatic transmission was still a couple of years away at this stage. 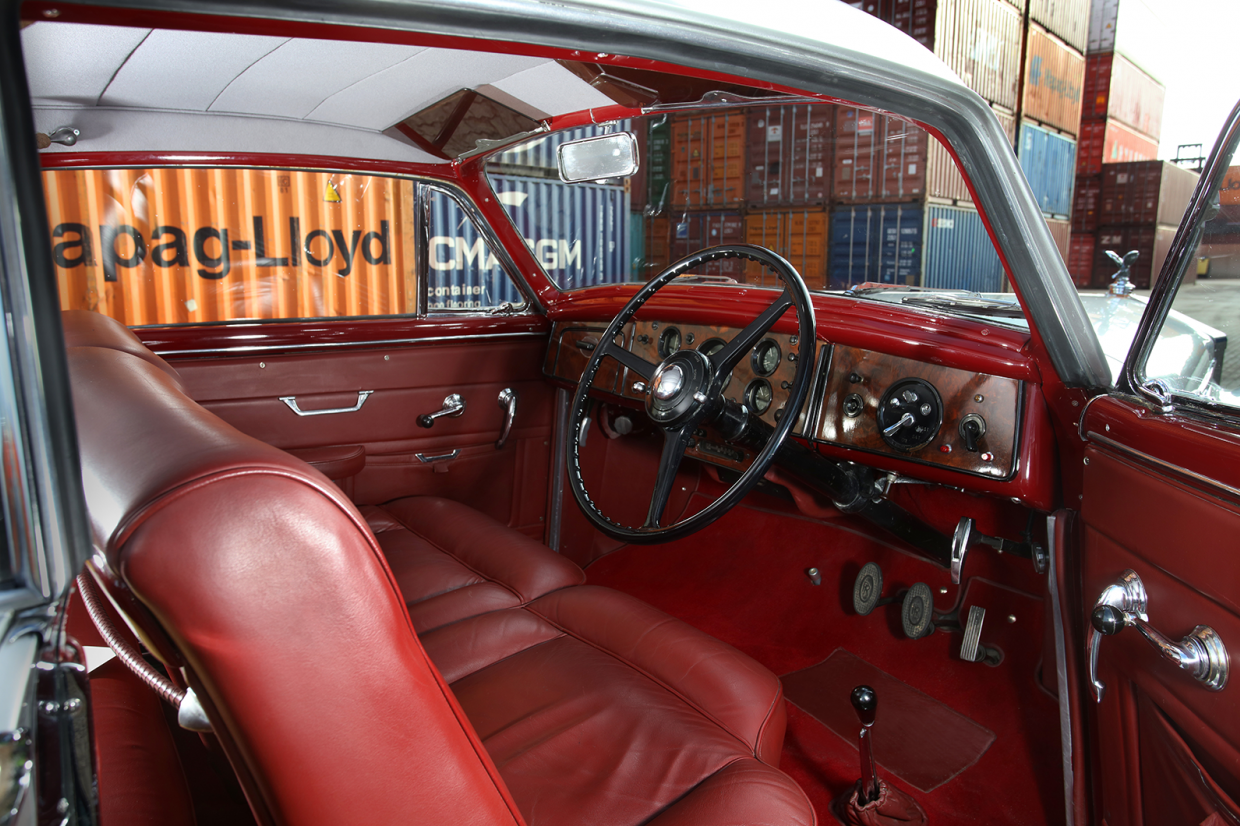 Breathing through a single carburettor for smoothness, ease of maintenance, and the luxury of an automatic choke not yet being available on the twin-carburettor Bentley, this 4¼-litre inlet-over-exhaust straight-six was the centrepiece of Crewe’s rationalised post-war range.

The road tax alone on an engine this size would have been unthinkable for most Italians in a country where anything over 2.8 litres was for tycoons only due to punitive horsepower tax, never mind 14mpg where fuel prices were among Europe’s highest.

Not that any of this would have worried Brassani.

In fact, with a waiting list of three years for a Standard Steel factory saloon, it is just possible that the 54-year-old Commendatore (knight commander, an Italian military order of chivalry) saw the commissioning of a special body as a way of jumping the queue.

Albeit an expensive one. 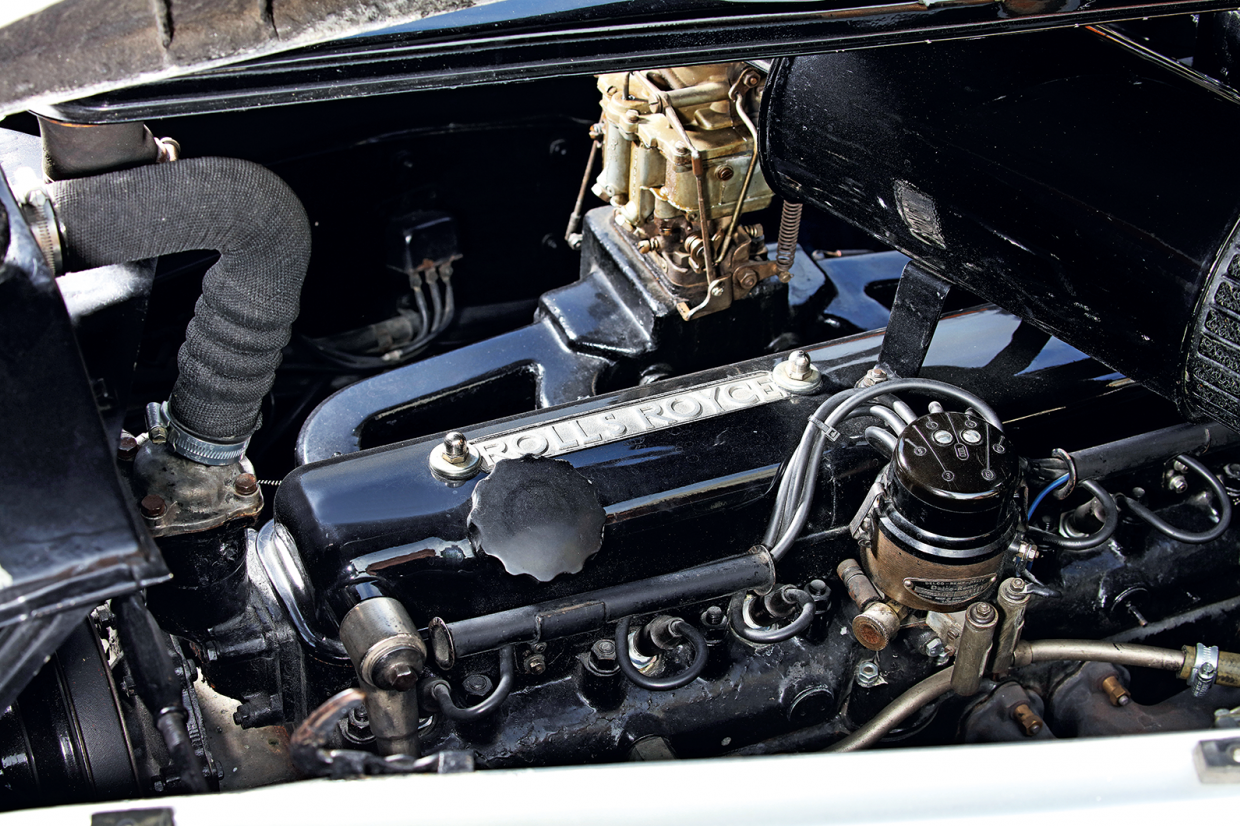 As with the one-off creations of the British coachbuilders on Rolls-Royce and Bentley chassis, the design of the car would have required approval from Crewe if the owner wanted to maintain their three-year warranty.

Under the skin there were differences in construction methods: the fast-working Italian panel-beaters dealt in steel; the likes of Park Ward, HJ Mulliner and James Young remained wedded to aluminium over wooden frames.

Farina (it wouldn’t become Pininfarina until 1961, by special legal decree) was the natural choice for the project.

Founder Battista ‘Pinin’ Farina had been in the coachbuilding business for 20 years and was emerging as the leading figure in selling the idea of Italian car styling – and the general notion of Latin style in industrial design – to the world. 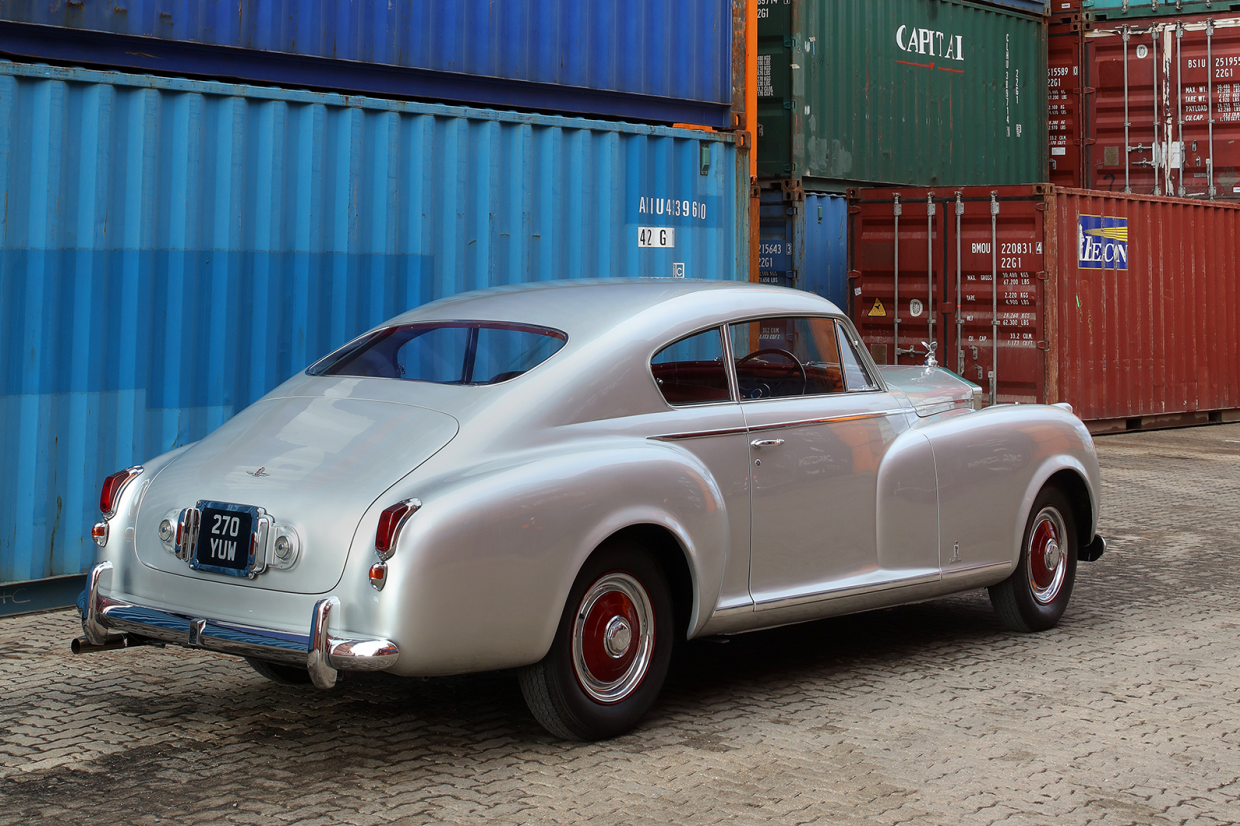 In Italy the man was a celebrity, regularly pictured rubbing shoulders with film stars, politicians and royalty as he moved his firm from a craftsmanship-based entity building short runs and one-offs by hand to the true industrialised concern it became in the late ’50s.

By then it was producing sports car and coupé bodies by the thousand for Fiat, Lancia and Alfa Romeo.

This short, pugnacious individual created his bodywork by feel and eye, with artists and draughtsmen to commit his ideas to paper.

He had developed a sure touch for shapes that were clean and modern but also honest, at the same time respecting the values of the marque he had been commissioned to clothe. 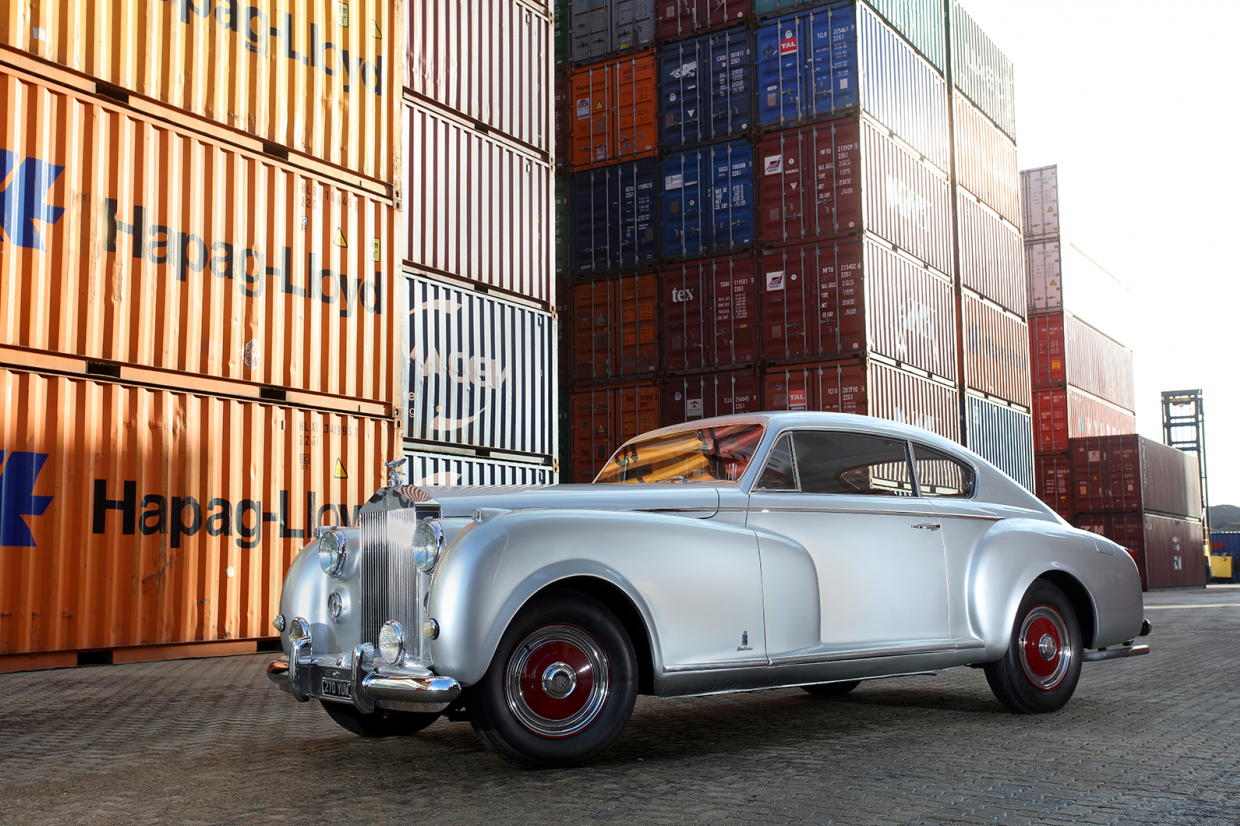 While Bertone, Ghia and Touring were hot on his heels, Farina was the undisputed leader of his industry.

His rival carrozzerie sometimes went to flashy extremes; Battista, increasingly counselled by his son Sergio, generally favoured a kind of progressive restraint that had solid foundations in function and practicality.

His 1947 Cisitalia was fêted as a turning point in the development of body design and in 1951 earned itself a permanent place in the Museum of Modern Art in New York.

That was also the year of his new Lancia Aurelia B20. It was displayed for the first time at Turin alongside the Bressani Silver Dawn, which, according to the monochrome images, was finished in a darker (but hard to identify) colour than its current Georgian Silver.

The Farina Dawn dropped off the radar after the new owner took delivery in 1951. It became a car familiar only from its appearances in various Rolls-Royce and Pininfarina history books, little more than an interesting footnote. 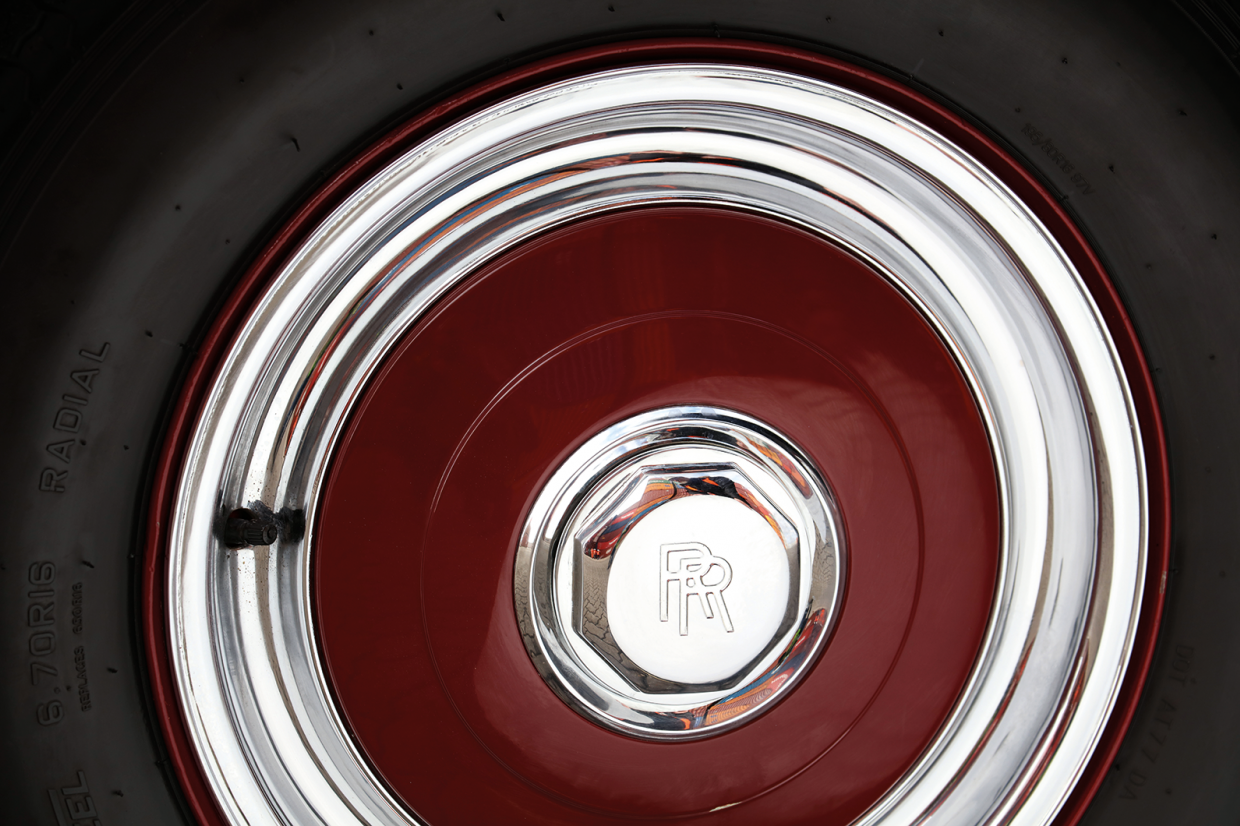 What we do know is that it acquired the Italian registration number 82075 PV in the early ’60s and had been through two more owners by the time it was rediscovered in 2013.

Total kilometres stood at just more than 5000 when Stuart Wilkie of Dunfermline captured the car in 2013.

Naturally, some recommissioning was required and, after mechanical refreshment by specialist Clark and Carter, it hit the UK roads in 2014, registered 270 YUW.

I first spotted the Farina at the 2019 Rolls-Royce Enthusiasts’ Club Burghley House AGM, looking a bit lost among all the giant Ghosts and Phantoms on the Vintage & Prestige pitch, yet with a compact dignity that was attractive. 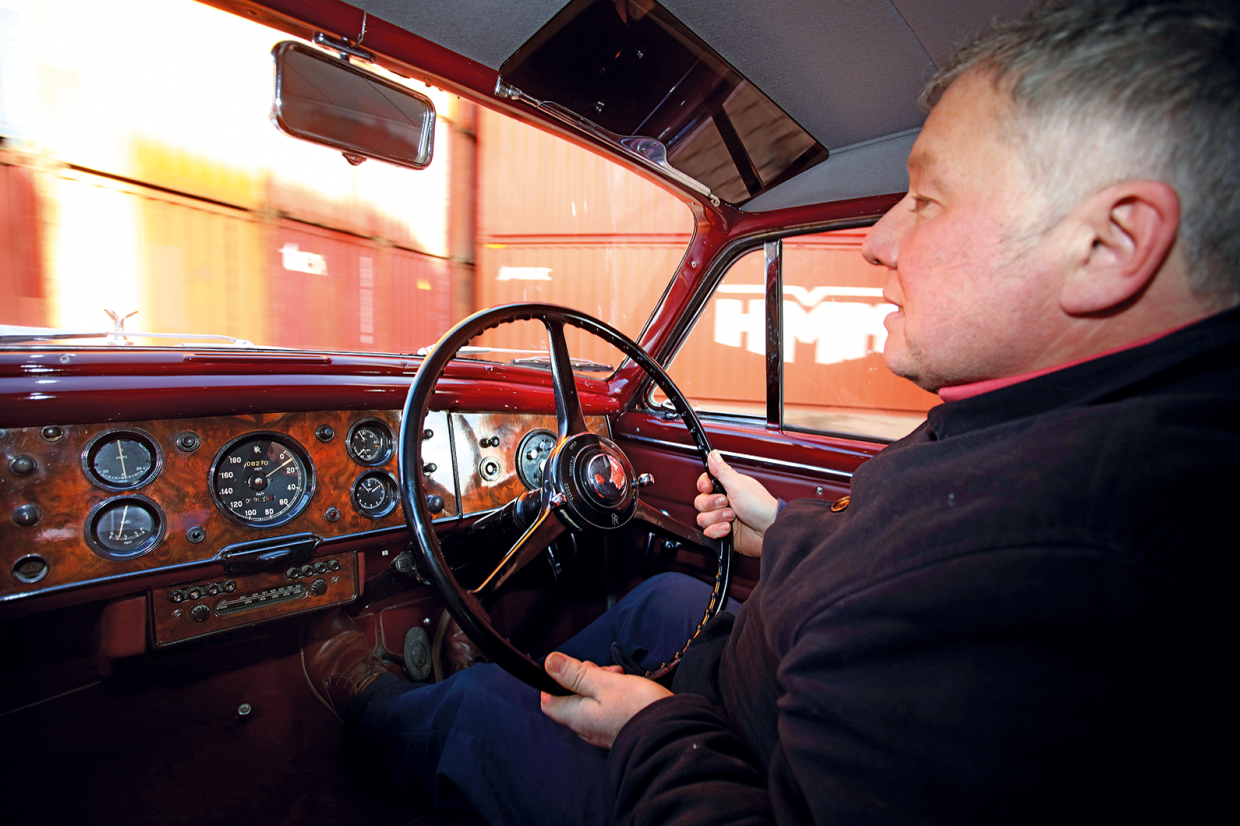 While it is not as effortlessly graceful as the Continental, it has an appeal of its own.

It is as squat and voluptuous as the standard Dawn saloon is upright and formal. As urbane as Cary Grant in a cravat and blazer.

From the rear it has a touch of the Aurelia B20 about its falling roofline, or maybe an American ‘business coupe’ of the ’40s, if one was being less kind.

The bumpers appear bespoke but could be modified standard pieces. The grille, with the Spirit of Ecstasy kneeling, seems unmodified and you gain access to the engine bay through the usual split bonnet arrangement.

The various feature lines and ‘jewellery’ are either bespoke to the car or items from the Farina catalogue.

The main door windows are frameless and apparently have the same low-geared winder mechanism as the Aurelia, likely worked by the Italians’ favoured system of wire and pulleys. 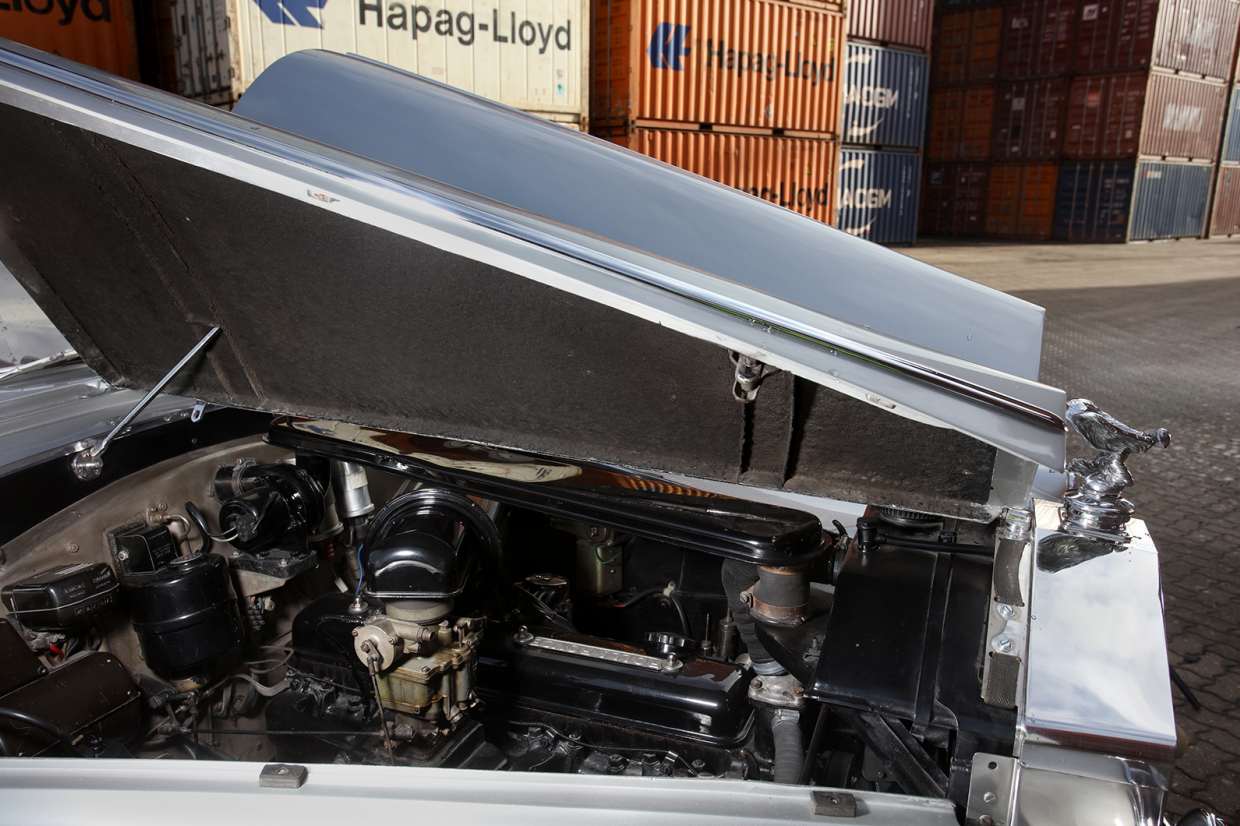 Once inside you can see how the Italian styling has necessitated a redistribution of space in favour of front occupants, those in the rear losing out in head and knee room. The parcel shelf, in contrast, is huge.

There are no picnic tables or wooden cant rails but the veneered dash looks standard Dawn/Wraith, so does the steering wheel with its ride and throttle control levers on the centre hub.

The view forward is commanding, but to the rear compromised by the hefty blind rear quarters; if ever a car needed wing mirrors this is it, but they would spoil the lines. 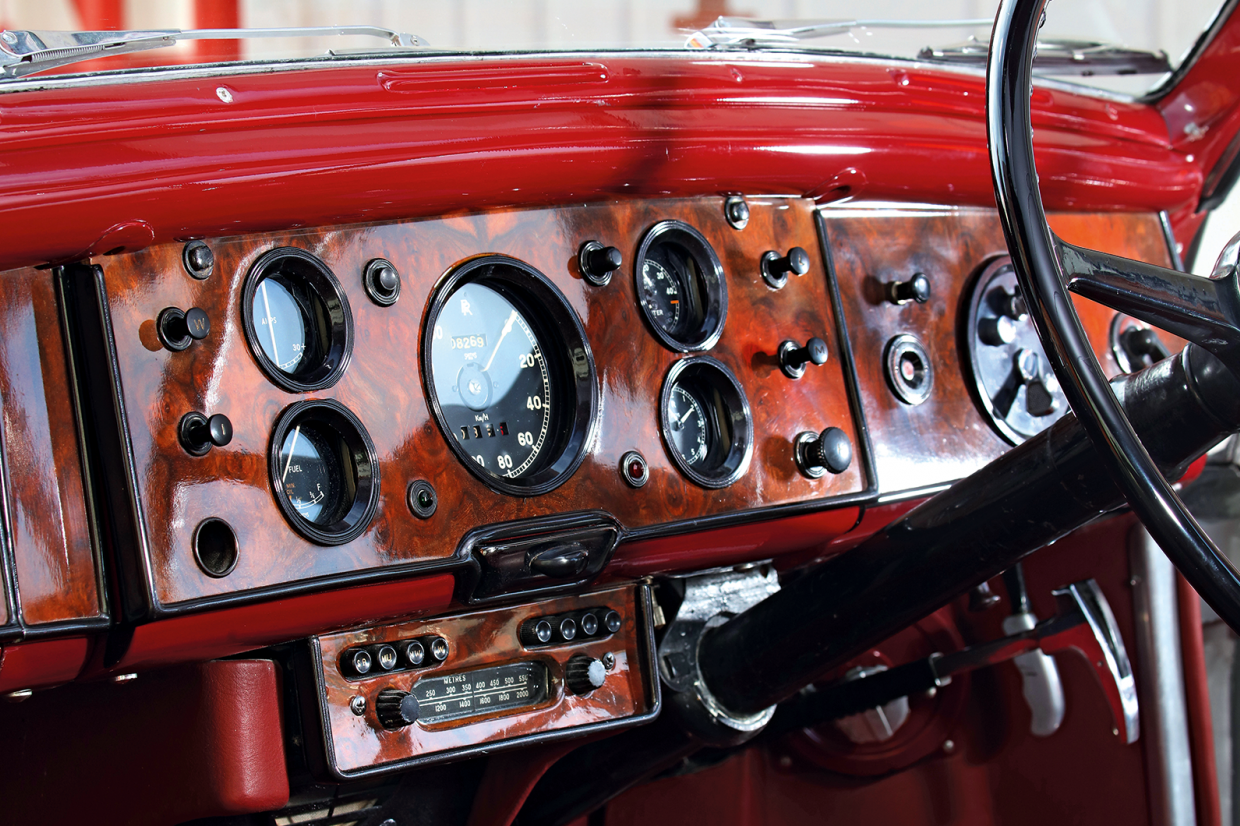 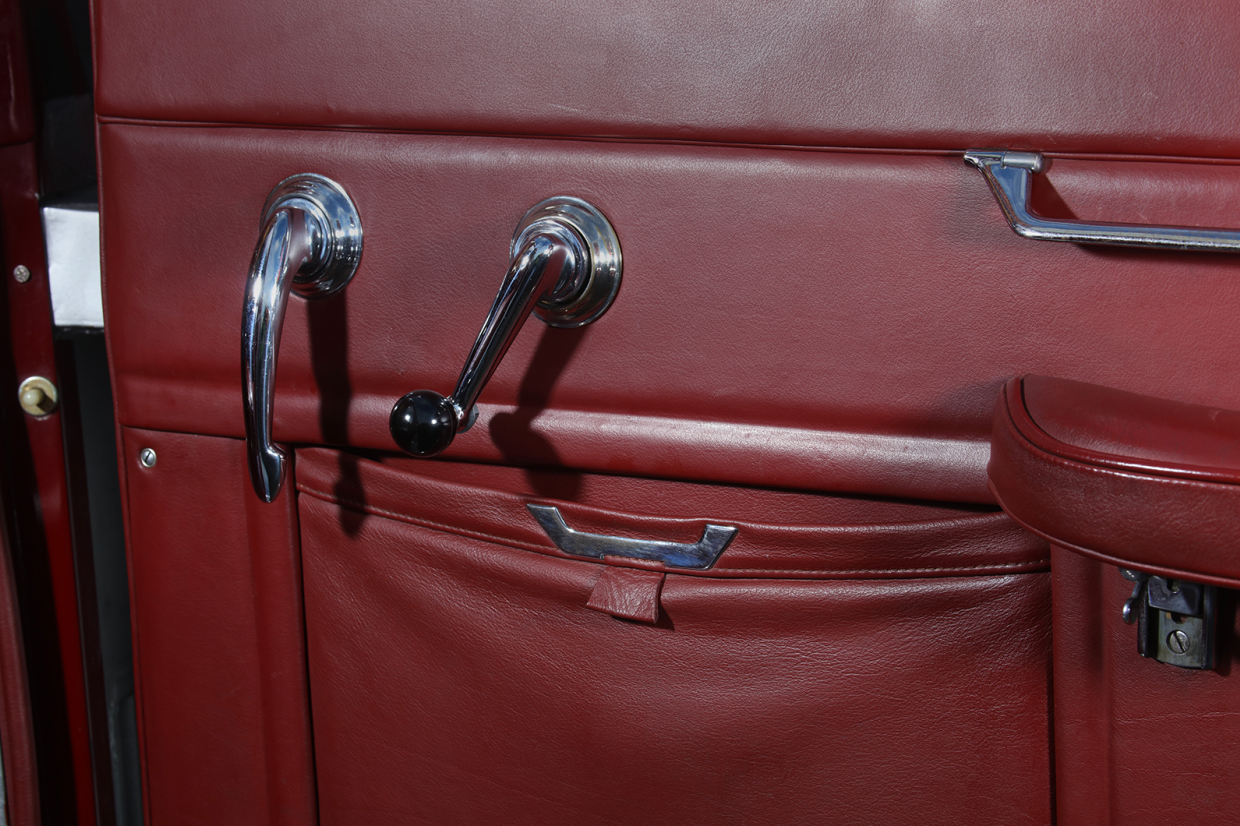 With the ignition in the ‘on’ position you can start without keys.

There’s no sense of a straining starter motor, just an understanding that the straight-six is all at once humming somewhere up front, immaculate in black enamel.

The gearchange, rather like the steering and throttle action, is silky yet mechanical and there is an elegant sufficiency of urge that keeps the Dawn up with modern traffic.

You tend to pull away in second and there is every incentive to go straight to top, where it will pull smoothly from as little as 5mph without abusing the clutch.

It wasn’t designed to be tossed around like a sports car but the Dawn maintains dignity at all times and remains stable, with strongly progressive brakes.

Roundabouts can be taken with a well-groomed top-gear purr of muted aspiration, and a gentle flutter from the exhaust, the big steering wheel castoring back smoothly in the hands. 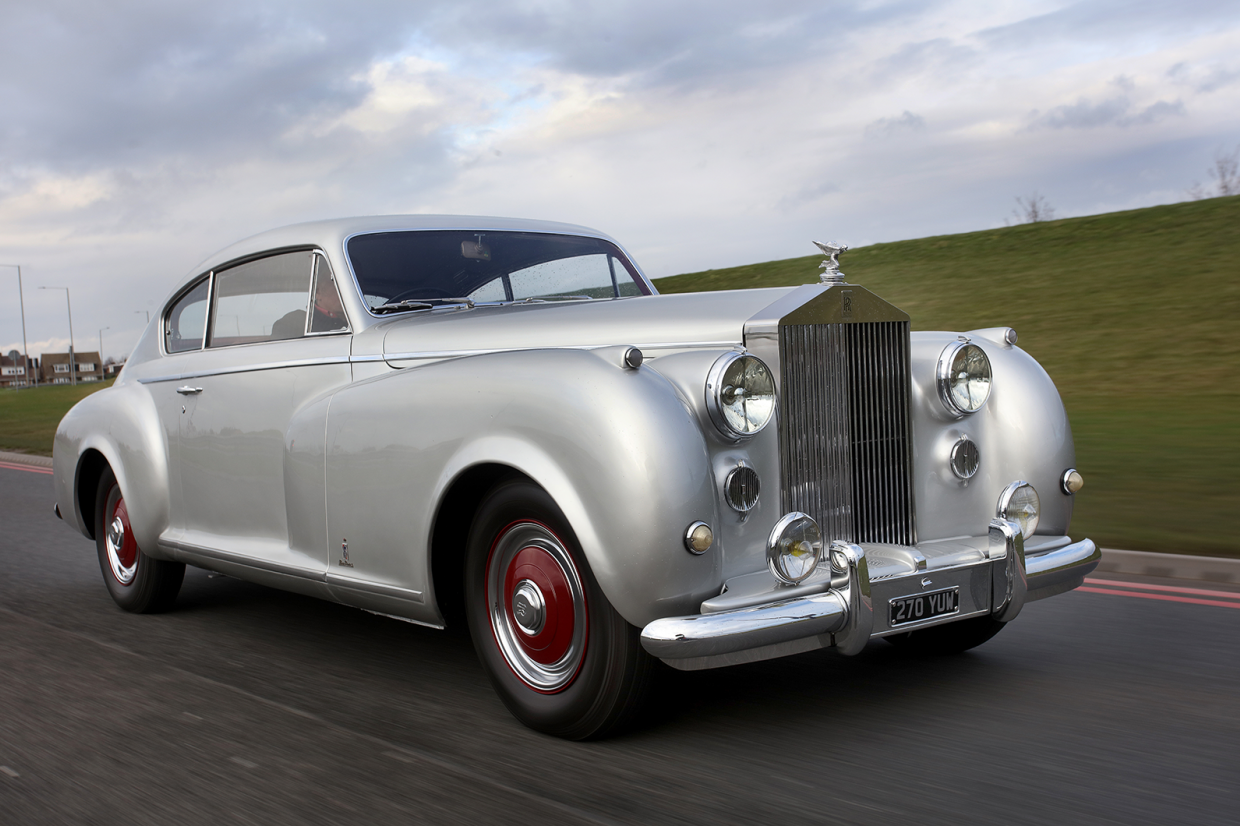 Even showing the current 7000km this car must be one of the lowest-mileage Silver Dawns in existence.

It does not feel its 69 years and has a discreetly impressive turn of speed that its fluent drivetrain, quiet gears and generally silent engine tend to disguise.

This was by no means the first Farina-penned Rolls-Royce. The firm had bodied Phantom IIs for Marquis Demetrio Imperiali in 1935 and in 1937 for Signor Wax of Milan, the latter with a memorably raked grille.

However, the Bressani Silver Dawn seems to be its last rendition before the introduction of the Camargue in 1975. 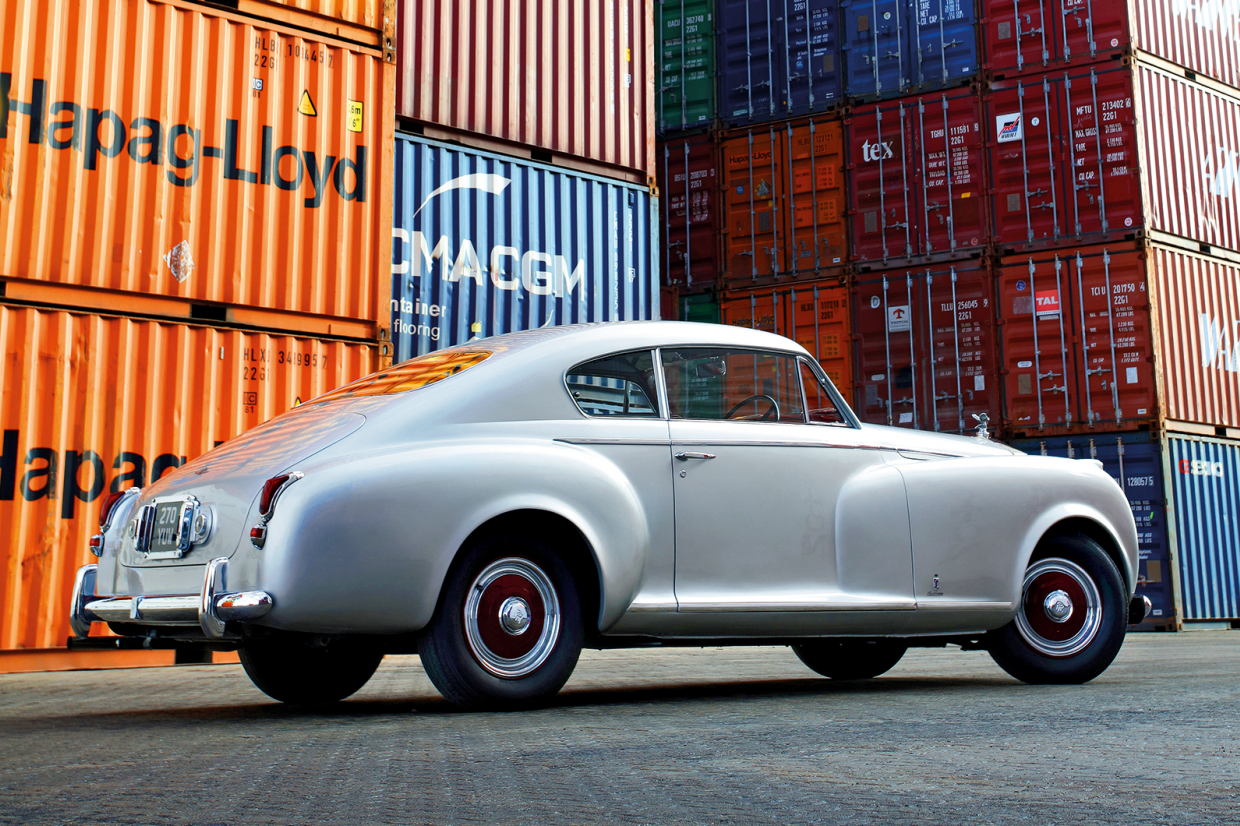 Its significance lies not in its shape, but in the fact that it began the process of establishing a principle: that the public would accept a Rolls-Royce with an Italian body.

To be asked to re-dress a Rolls-Royce was a flattering but daunting assignment, particularly for a foreign coachbuilder.

After recommissioning in 2014, 270 YUW achieved a first-in-class award at the Warren Concours but was soon sold by Silverstone Auctions for a handsome £425,000.

That it appeared in the Bonhams sale at the Goodwood Revival three years later is an illustration of the eternal dilemma in which one-off oddities such as this can find themselves.

Most of the buyers who appreciate its rarity and historical importance can’t afford it; those who can would probably rather spend their money on something ‘sexier’, such as an S1 Continental. That would only be human nature.

Still, on the basis of the old motor-trade saying ‘there’s an arse for every seat’, I’m confident this car will find a loving home where it is appreciated for what it is rather than what it is not. By the time you read this, it might already have.

Thanks to Chris Kishtoo at Vintage & Prestige; Dan Smith at Solent Stevedores 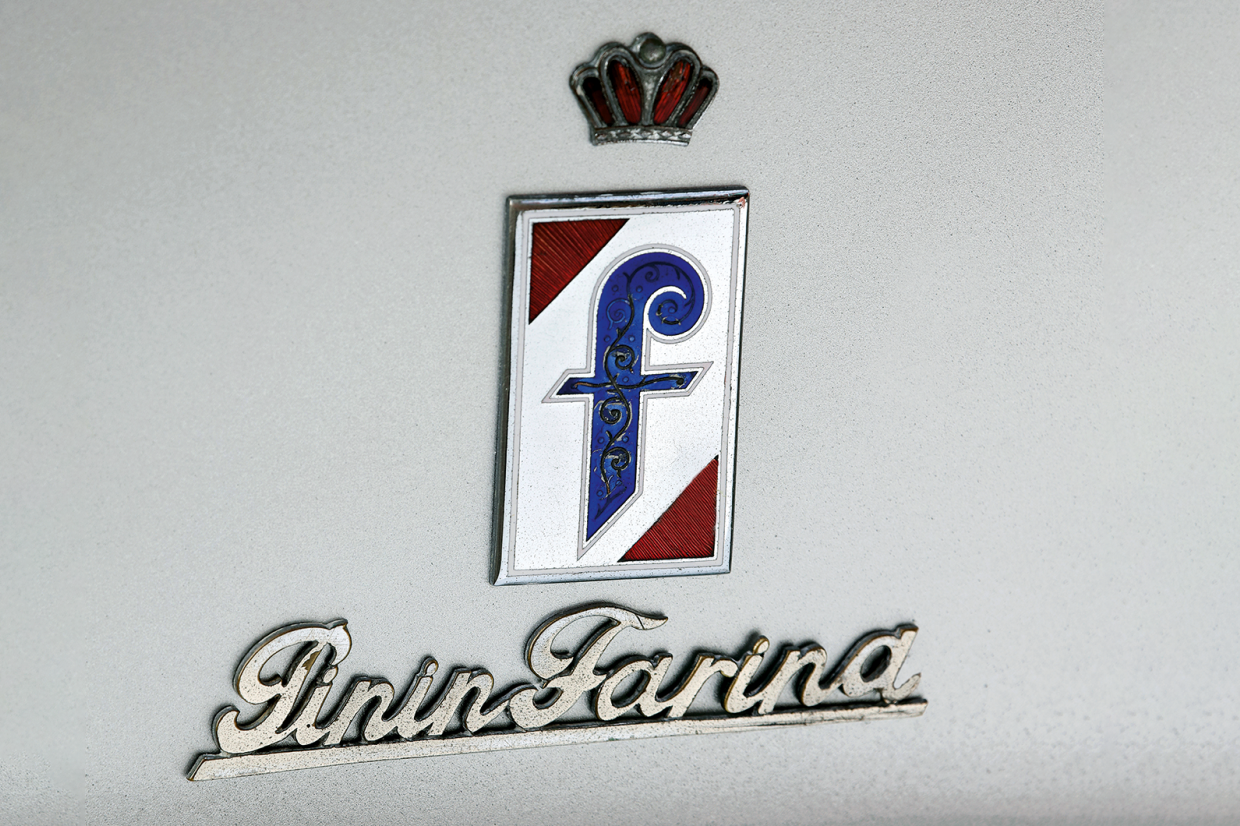 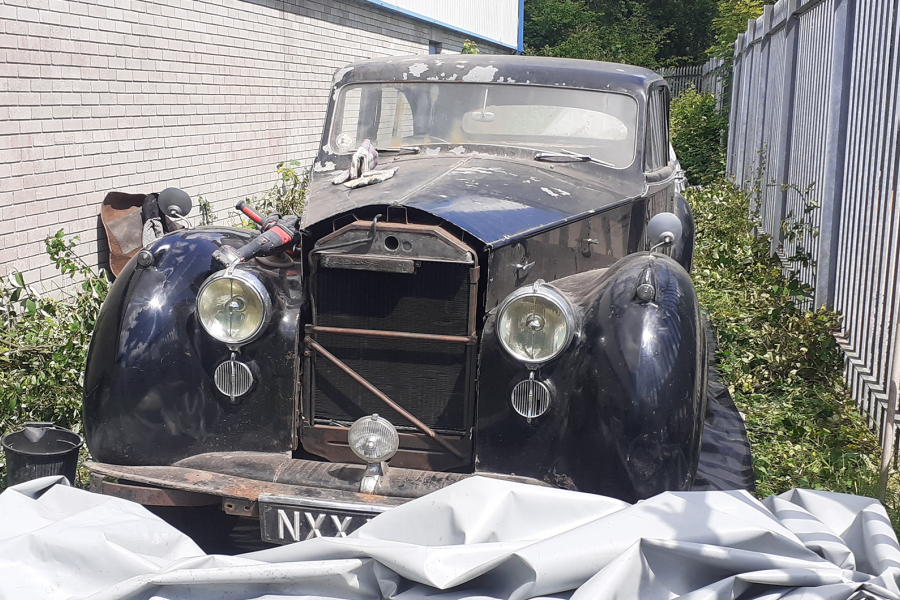 Rolls-Royce Silver Wraith: please talk me out of this 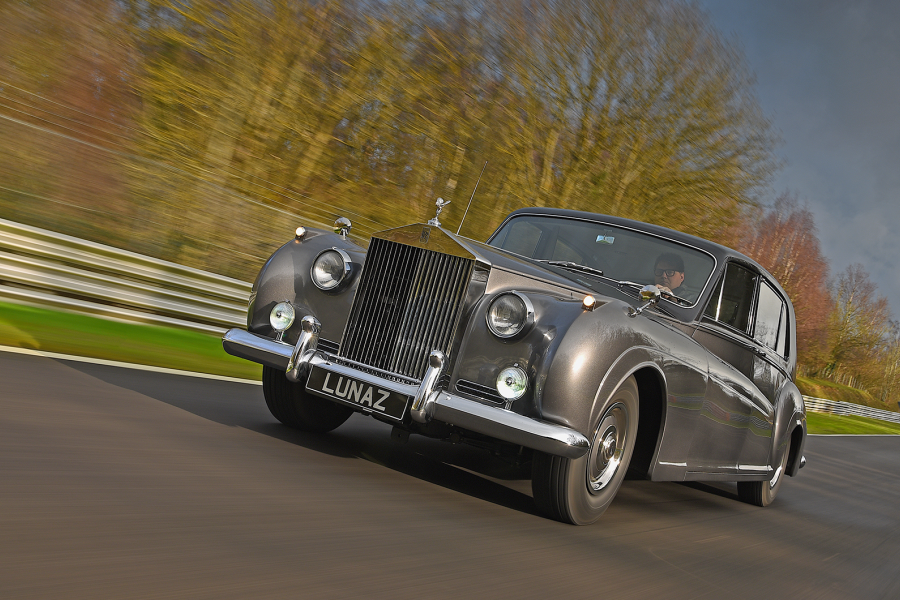 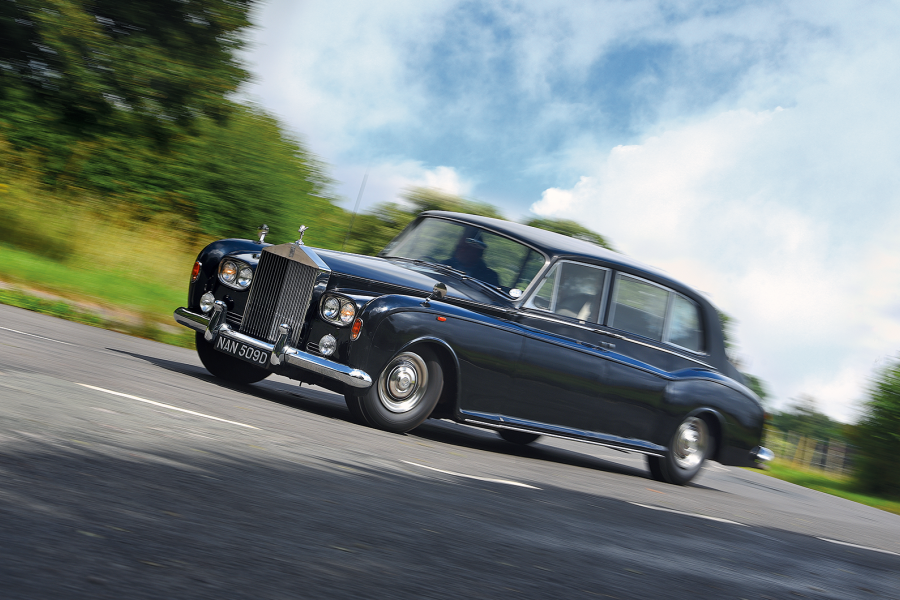 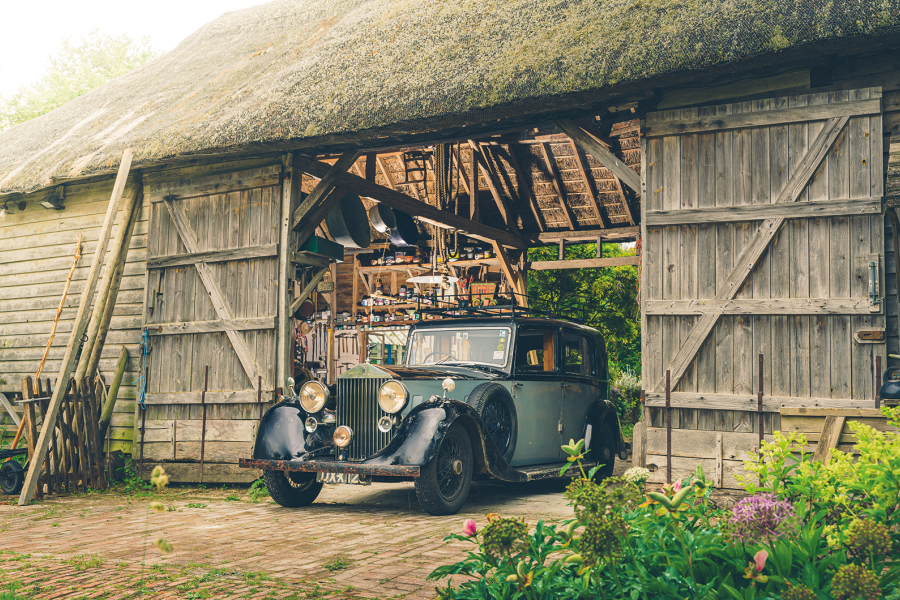