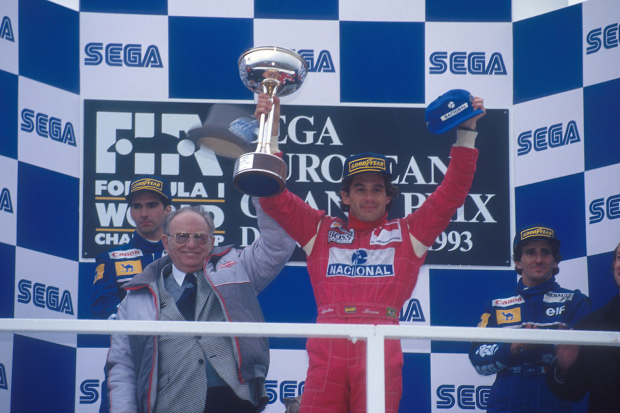 It’s a moment that encapsulates everything about the 1993 European Grand Prix.

After the national anthems have been played, Ayrton Senna – looking as if he’d barely lifted a finger all afternoon – is handed the winner’s trophy. Perhaps if it had been the usual dignitary or politician doing the presentation, he’d have stayed where he was, politely acknowledging the brief pleasantries before raising the prize in celebration.

Instead, Senna comes down from the top step and warmly shakes hands with Tom Wheatcroft – the man who’d finally succeeded in bringing Grand Prix racing back to his beloved circuit.

Wheatcroft shouldn’t have been there. He should have been recovering from an operation following a heart attack, but on the Saturday he informed his specialist that he was going to Donington. Then, to the horror of said doctor, he decided that – on a grey and miserable Sunday morning – he was going to do some demonstration laps in a Mercedes W154.

Despite the fact that it was raining heavily, and that he’d never driven the pre-war titan, and that he was wearing a silk scarf over his mouth to prevent cold air getting to his chest, out went Wheatcroft. And then off went Wheatcroft – after struggling to catch his breath, he’d made the mistake of pulling down the scarf. The pain was such that he lost control and ended up in a gravel trap. But he wasn’t done. A tractor hooked him out, he completed his four laps and then he was taken straight to the medical centre, where he passed out.

Somehow, he later made it to the podium and said that he felt “as strong as a bulldozer” as he stood there with Senna. With the ceremony complete, he went home to bed. 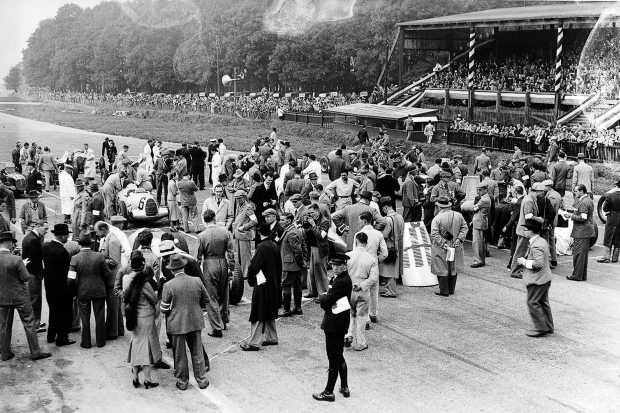 Wheatcroft had first visited Donington Park as a boy, cycling 13 miles from home to crawl though the hedge and catch a glimpse of the action. He was there when Mercedes and Auto Union swept all before them in 1937 and ’38, and not surprisingly the spectacle left a lasting impression.

After WW2, Wheatcroft took his £50 demob gratuity and set himself up in the construction business. It would make him a wealthy man, and he was able to indulge in his passion for motor racing by building a sublime collection of Grand Prix cars. Then, in 1971, he heard from a local planner that the long-abandoned and derelict Donington Park could be up for sale.

Emphatically nobody’s fool, Wheatcroft drove a hard bargain and the deal was done within days, but not until 1977 would the circuit reopen after expensive battles with everyone from Rolls-Royce and East Midlands Airport to the local villagers and various councils.

Although he had the circuit homologated to host a Grand Prix, it wasn’t that simple. At that time, the British race alternated between Silverstone and Brands Hatch, and it appeared that there wasn’t room for Donington. Five times he was apparently promised a Grand Prix, and on each occasion it failed to come off.

Along the way, however, he’d made a vital ally. When Bernie Ecclestone needed a replacement for the planned Asian Grand Prix, which had fallen through, he called Wheatcroft and a European Grand Prix was quickly scheduled for 11 April 1993. 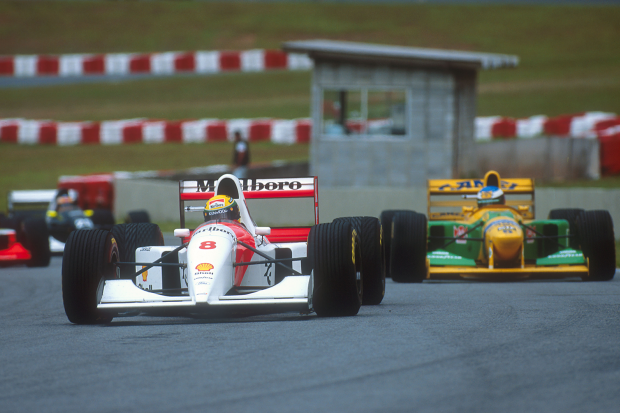 Despite the McLaren's lack of power, Senna had already won in Brazil that season

It would be the third race of the season, and against all expectations Ayrton Senna arrived in Leicestershire leading the World Championship.

A potential move to Williams had been vetoed by Alain Prost, and a disenchanted Senna had refused to commit to McLaren, which was running customer-spec Ford V8 engines and appeared to offer little chance of competing against the high-tech Williams FW15C. Instead, he was driving for the team on a race-by-race basis, but he’d nonetheless finished second in South Africa and won a wet-dry Brazilian Grand Prix.

“If conditions are stable and nice and predictable,” he said on the morning of the Donington race, “Williams is well ahead. There is no hope. So in order to have some hope, you’ve got to have some question marks… You need uncertainty and you hope you make better decisions than the competition.”

He got exactly what he hoped for – conditions that changed almost by the lap and allowed his genius to shine. 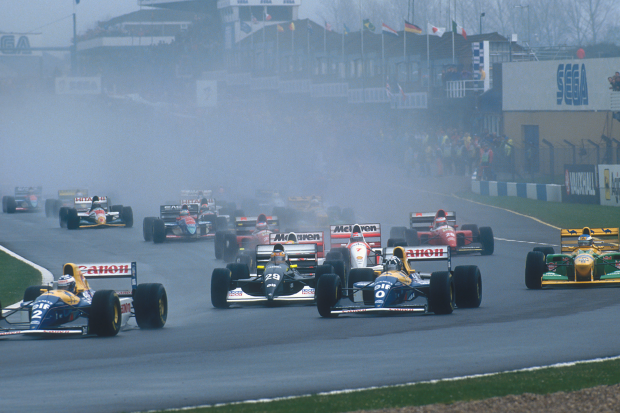 Senna had qualified fourth behind Prost, the other Williams of Damon Hill and the Benetton of Michael Schumacher, and as they went to the grid the wet surface was starting to dry out.

When the lights turned green, Prost and Hill made good starts but Senna was forced wide on to the painted pit-lane exit by Schumacher, who’d moved left and allowed the Sauber of Karl Wendlinger to slip past both of them. Senna immediately jinked back to the inside and passed the Benetton.

It was his next move that best defines his opening lap. As the field plunged down the Craner Curves, Senna – utterly committed and in no mood to waste any time – swept around the outside of Wendlinger, who wisely gave him room.

“And after being crowded out at the start,” said BBC commentator James Hunt, “a quite brilliant couple of corners by Ayrton Senna.”

No sooner had Hunt finished his sentence than the Brazilian dived inside Damon Hill at McLeans to claim second. As the leaders exited Coppice, Senna’s team-mate Michael Andretti continued his unfortunate start to the season by ploughing into Wendlinger and removing them both from the race. In the excitement, Murray Walker was momentarily transported back 15 years: “Mario Andretti is out!” 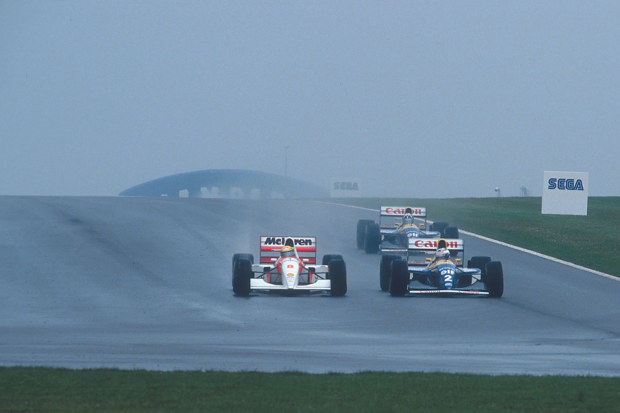 Senna passed Prost before the end of the first lap

Back at the sharp end, Senna outbraked Prost into the Melbourne hairpin to assume the lead. Prost motioned as if to fight back going into the final left-hander at Goddards before thinking better of it.

As they crossed the line, Senna, Prost and Hill were running in close company, but at Redgate it was clear that the McLaren was travelling at a complete different rate of knots. At the exit of the right-hander, Senna’s car stepped out of line but he gathered it up in an instant and disappeared into the distance.

If his first lap receives all the plaudits, the second was no less impressive. He completed it in 1 minute 27.882 seconds. Prost covered it in 1 minute 31.429 seconds, Hill in 1 minute 32.003 seconds. There was a long way to go, but already Senna had delivered the killer punch.

When the chequered flag was finally waved, only Hill was on the same lap – and even that was by the skin of his teeth. 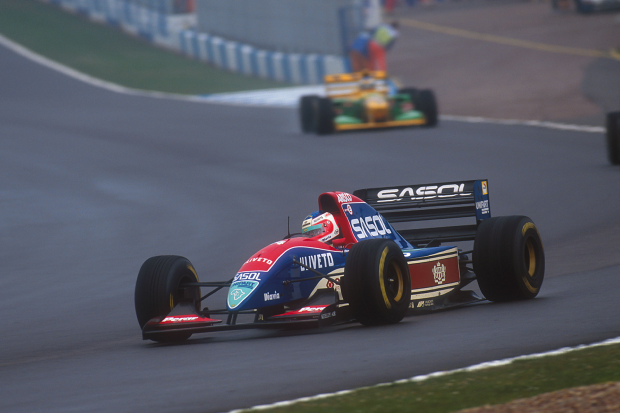 Rubens Barrichello excelled in only his third Grand Prix

His victory may have passed into legend, but Senna himself didn’t rate it as highly as the 1985 Portuguese Grand Prix. That race had taken place in dreadful conditions and crucially – as far as Senna was concerned – his turbocharged Lotus didn’t have traction control. Unlike in 1993, the only form of traction control had been his right foot.

And nor was his the only memorable drive at Donington. Watch the television footage and towards the end of lap two the Jordan of Rubens Barrichello appears behind the Williams pair. The young Brazilian was in only his third Grand Prix and had climbed to fourth place after starting 12th on the grid. As Williams lost all semblance of strategy in the ever-changing conditions – Prost made a total of seven pit-stops – Barrichello ran as high as second, and was fourth when he was forced to retire on the 71st lap.

For surely the first and last time, Eddie Jordan was lost for words at the cruel result. The beneficiary was Johnny Herbert, who was promoted to fourth after a superb drive during which – like Senna and Barrichello – he’d gambled by staying out on slick tyres when other were panicked into stopping for wets. Afterwards, his boss at Lotus, Peter Collins, called his efforts “simply stunning”.

In the post-race press conference, third-placed Prost mumbled about various problems he’d had with his Williams and how difficult the afternoon had been. Senna suggested that perhaps he’d like to swap cars… 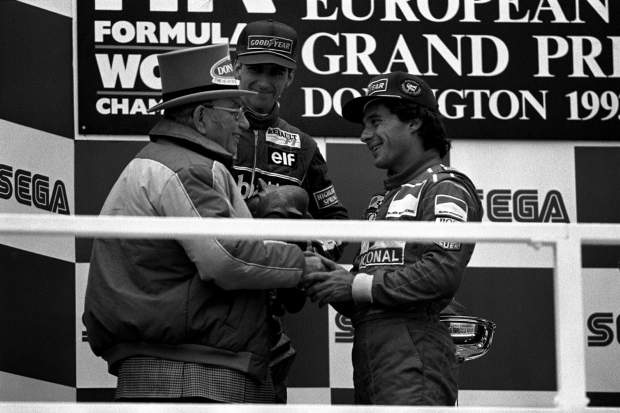 Senna was quick to thank Wheatcroft at the race's end

It seems barely credible that 25 years have passed since that historic afternoon. The April date and the poor weather meant that attendance was lower than expected and Wheatcroft lost a fortune. He didn’t care. He’d achieved his ambition and at the end of the season was awarded with a prize by the FIA for that year’s best-organised race.

In the immediate aftermath, Ecclestone had wanted to go back to Donington but Wheatcroft said no. As it stands, the last three winners of a Grand Prix there are Bernd Rosemeyer, Tazio Nuvolari and Ayrton Senna. Perhaps it’s best left at that.

“He has lived for the time that there’d be a Grand Prix at Donington,” said Murray Walker as Wheatcroft took to the podium. “He’s fought tremendously hard for it.”

Amongst all of the latest celebrations of Senna’s famous drive, take a moment to remember the man who gave him the stage on which to perform.

The 1993 European Grand Prix will be remembered at this year's Donington Historic Festival, from 4-6 May. For more information and to buy tickets, head to the official website