Graham Hill and the season that changed Formula One 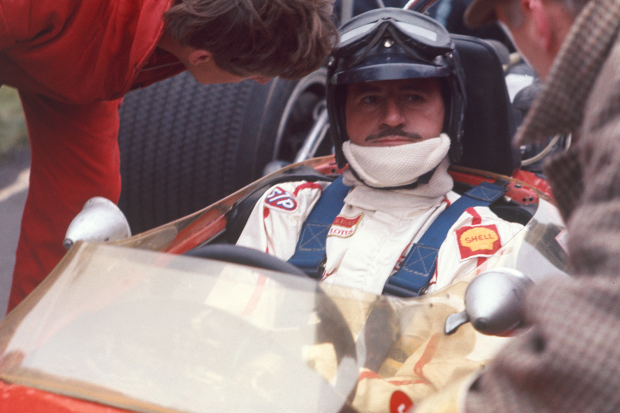 So many things about the 1968 Grand Prix season are unfathomable to an audience raised on modern Formula One, and yet the seeds of three very familiar aspects – safety, aerodynamics and sponsorship – were sown that year.

The legendary Englishman had a towering career, but his talent and character were never shown off to better effect than during 1968. Considering the turbulent few months that he and Lotus had endured, it was a fitting result, and the foundations for his success were laid 50 years ago this weekend with a crucial victory in the Spanish Grand Prix. 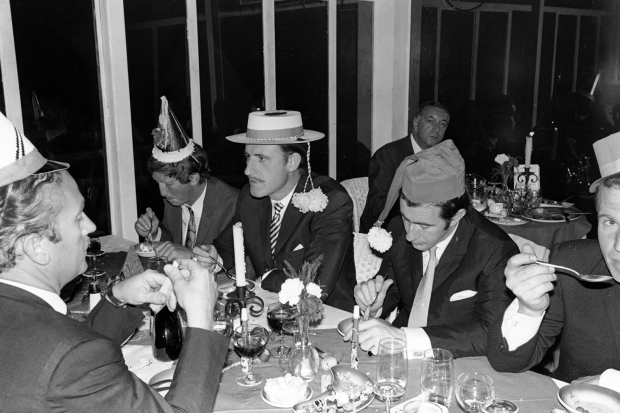 The season-opening South African Grand Prix was held on New Year’s Day, and seemed to indicate that all was business as usual.

After a relaxed build-up to the race during which Hill would sit at the Kyalami Ranch while timing cars that were testing up at the circuit – visible from his spot next to the swimming pool – his Lotus teammate Jim Clark claimed victory.

It was the 25th of his career, a total that moved him one clear of Juan Manuel Fangio and set a new benchmark, but it would also be his last. 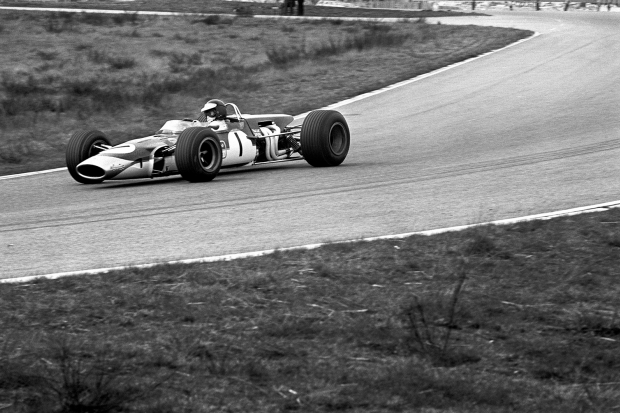 The final photo of Jim Clark, taken at Hockenheim shortly before his death

By the time the Spanish Grand Prix finally rolled around in May, the motorsport landscape had fundamentally changed, and not only due to the arrival of tobacco sponsorship; the traditional Lotus green had been replaced on Hill’s 49 by the red and gold livery of Gold Leaf.

The previous month, Hill and Clark had been at Hockenheim for a Formula Two race. On a damp, horrible day, both of them struggled – their Firestone tyres weren’t suited to the conditions and the engine in Clark’s car had been misfiring all weekend.

"I can remember soldiering on in about eighth place or thereabouts," wrote Hill in his autobiography Life At The Limit, "and every time I came into the infield I could see Jimmy in front of me on one of the twisty bits of track; then he disappeared…"

Clark’s Lotus had plunged into the trees on the fastest part of the circuit. He was killed instantly, and the news was broken to Hill at the end of the race. It was Graham who phoned Lotus boss Colin Chapman to tell him that his close friend had died, who helped to retrieve the wreckage from amongst the trees, and who provided vital leadership in the immediate aftermath.

His fortitude is worth bearing in mind the next time one of today’s multi-millionaires petulantly throws their toys out of the pram. 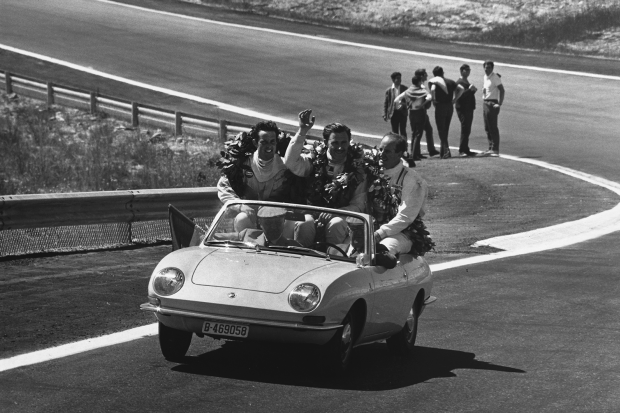 Hill picked Lotus up again by winning the Spanish GP

Lotus turned up for the Spanish Grand Prix shell-shocked not only by the loss of Clark but also of Mike Spence, who’d been killed during practice for the Indianapolis 500. Chapman stayed away from Jarama but, despite his absence, Hill knuckled down to score one of his most significant victories.

After getting the better of Denny Hulme, he was on hand to benefit when Chris Amon’s leading Ferrari retired. It was his first win since the 1965 US Grand Prix, and couldn’t have come at a better time. 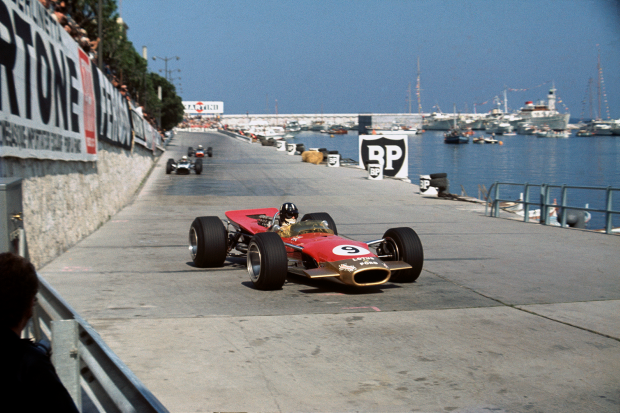 A triumph on the streets of Monaco, where he ultimately won five times

Two weeks later, he did it again at Monaco. It was the first outing for new teammate Jackie Oliver, as well as for the revised 49B, which – among other updates – featured a pair of front wings plus rear bodywork that was shaped into a spoiler.

This period marked F1’s first tentative steps into the world of downforce. At Spa the following month, Ferrari and Brabham ran with proper rear wings, although Hill – who retired with driveshaft failure – preferred to run with the Lotus shorn of appendages.

In the two weeks before Zandvoort, Lotus went testing and began to get on top of the 49B’s aerodynamics. Hill was running second to Jackie Stewart when he went straight on at the first corner. Sand often blew across the seaside circuit – it was getting stuck in the throttle linkage and preventing it from fully closing.

He recovered, only to later do it again while running fourth. This time, he knocked off a wheel and returned to the pits on foot. "Colin", he later noted, "didn’t even say goodbye." 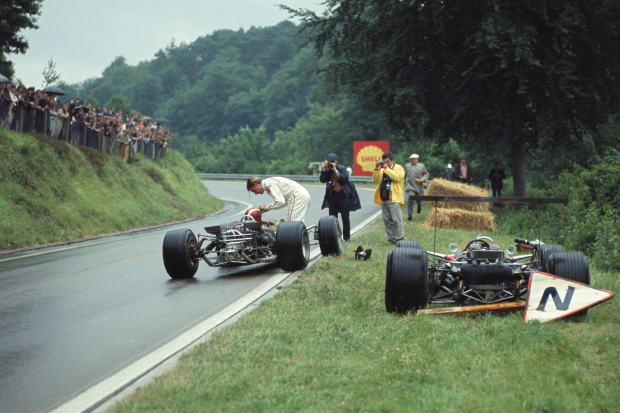 When Hill retired from the French GP he gave his visor to fellow Lotus driver Jo Siffert, who didn’t have one

It marked the mid-point of a trying series of races.

For the French Grand Prix at Rouen, Lotus turned up with spindly high-mounted rear wings, and Oliver was the first to experience the inherent danger of such a set-up. As he accelerated downhill towards the pits during practice, the long struts collapsed and the wing tipped backwards, picking the rear wheels off the ground and triggering a huge accident.

When the car finally stopped and the dust settled, Oliver found himself looking at the gates to a beautiful chateau. He wondered for a moment if he was in heaven, only to realise that he was still alive when Chapman – who’d sprinted across the track – arrived at his side and asked if he was OK.

Hill again retired, but during the early laps Jo Schlesser had perished in a fiery accident. Clark and Spence had died in April and May. In June, Ludovico Scarfiotti was killed during a hill-climb in Germany. And now Schlesser – four drivers in four months. 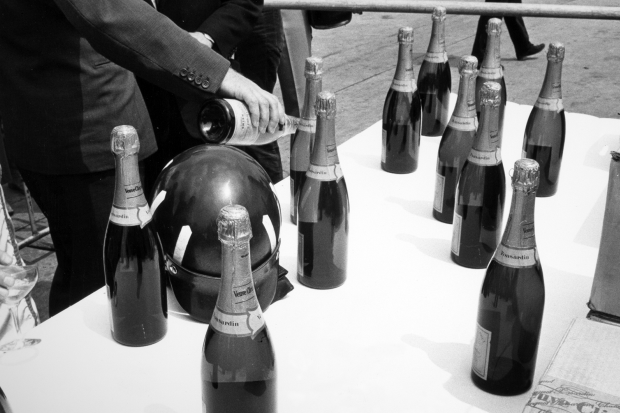 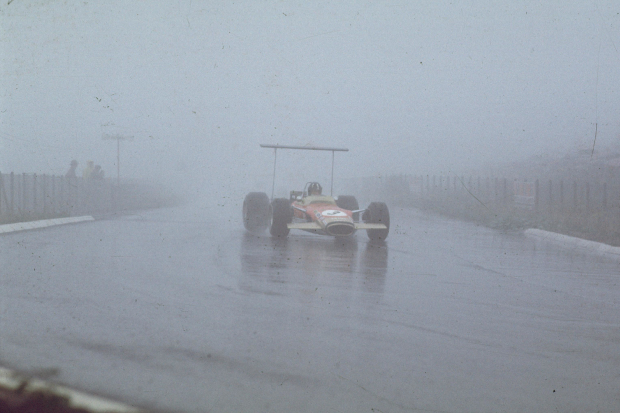 From left: 100 bottles of Champagne were some consolation for Hill’s British GP failure; Hill managed to tame the weather at the Nürburgring and finish second

Hill failed to finish the British GP, too, but it wasn’t an entirely wasted weekend. He won 100 bottles of Champagne for posting the fastest practice time and was due to host a party after the race so, as he put it, it "all tied in very nicely".

His season sparked back into life at the Nürburgring in August. No one was a match for Jackie Stewart in the foul conditions, but Hill finished second. He’d even survived a spin that left him in the middle of the track – he pushed the Lotus to the side before anyone else arrived on the scene, then managed to get it fired up again in time to hold off Jochen Rindt. 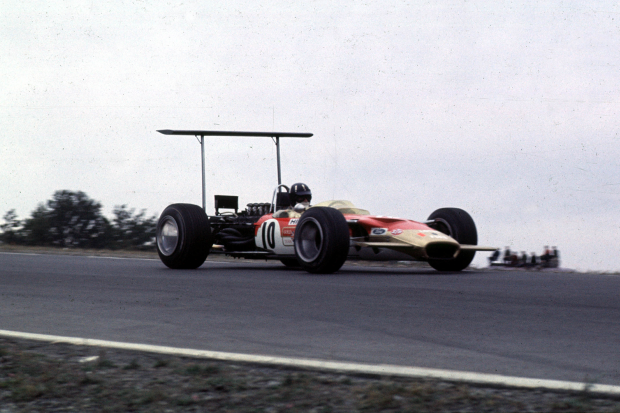 After a stumble at the Italian Grand Prix, when a wheel broke and he crashed out – he carried it back to the pits as evidence – Hill scored an unlikely but crucial fourth place at the Canadian Grand Prix.

With the Lotus’ handling becoming ever more wayward, he stopped at the pits. The mechanics could find nothing wrong, and neither could Hill when he hopped out to inspect it for himself. But then he got back in and, with the car up on jacks, blipped the throttle. The car buckled like a hinge – the top two bolts holding the engine to the monocoque had sheared.

Hill bravely decided to go back out. He braked and accelerated as gently as he could, changed gear as little as possible, and even adapted to the handling, which he described as "a bit queer because the front half of the car would be trying to go one way and the rear half the other way".

Incredibly, he nursed it home to finish fourth and gather more vital points. A lesser man would likely have called it quits, as they would have done at the penultimate round at Watkins Glen. When he hit the brakes at the end of the straight on the opening lap, the steering wheel plunged forward and trapped his hands against the dashboard. Not only that, they switched off the engine in the process.

Hill, surrounded by other cars, got it restarted and carried on to finish second – despite the fact that the wheel continued to move fore and aft throughout the race. 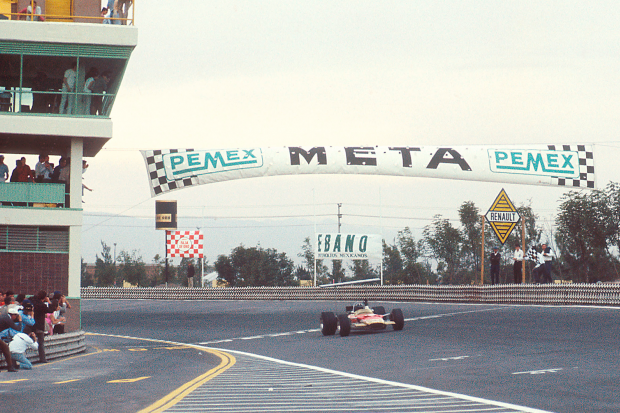 Hill clinched the Championship at Mexico, the final race of the ’68 season

The Lotus had a new arrangement whereby its rear wing defaulted to an angle that gave maximum downforce but, by pressing an extra pedal above the clutch, Hill could manually ‘flatten’ it on the straights to reduce drag. This was done via a cable, but it was found that, once the car was moving, airflow forced the wing into its ‘lie flat’ state.

In order to hold it down until Hill pressed the pedal, ever-increasing thicknesses of bungee were tried until eventually Lotus found ones that did the trick. It wasn’t sophisticated, but it worked. Or at least, it did until one of them came adrift shortly after the start. Fortunately, the second bungee held…

Hill, Stewart and Siffert engaged in a three-way battle for the lead, while Hulme’s title hopes ended following an accident. Then Siffert retired with a broken throttle linkage and Hill noticed that Stewart had dropped away: "'That’s a bit of luck', I thought, 'and I hope he keeps it up.'" He did – the Scot’s Matra had fuel-feed trouble.

Hill was in the clear, and eased through the final few laps to win the race and claim his second title in style. A year that had been so traumatic for so long ended with him being presented with an OBE at Buckingham Palace. 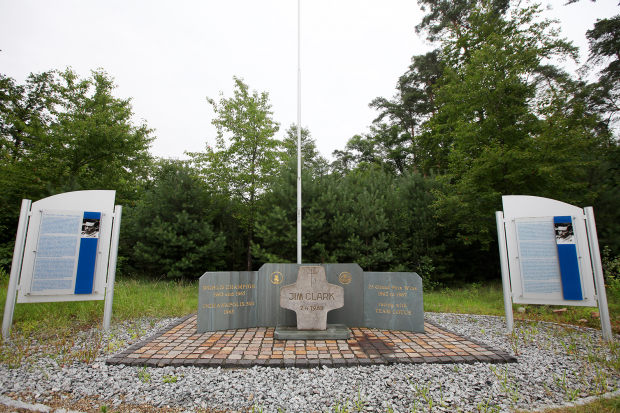 The trackside tribute to Jim Clark at Hockenheim

High-mounted wings were banned early in 1969, but the lower and more refined versions were here to stay.

Jackie Stewart claimed his first title that year and – angered by the deaths of so many friends and colleagues – became increasingly critical of the era’s farcical safety arrangements, bravely taking an often-unpopular stand against the apathy of circuit owners.

Of the 24 drivers who had scored points in 1968, 10 died in racing cars. Say what you will about the current dominance of ‘aero’ and the transformation of Grand Prix racing into the television-friendly F1, but even the most rose-tinted of purists would have to agree that’s a statistic they don’t wish to see repeated.

5 genuine F1 cars you can buy at the Monaco auctions