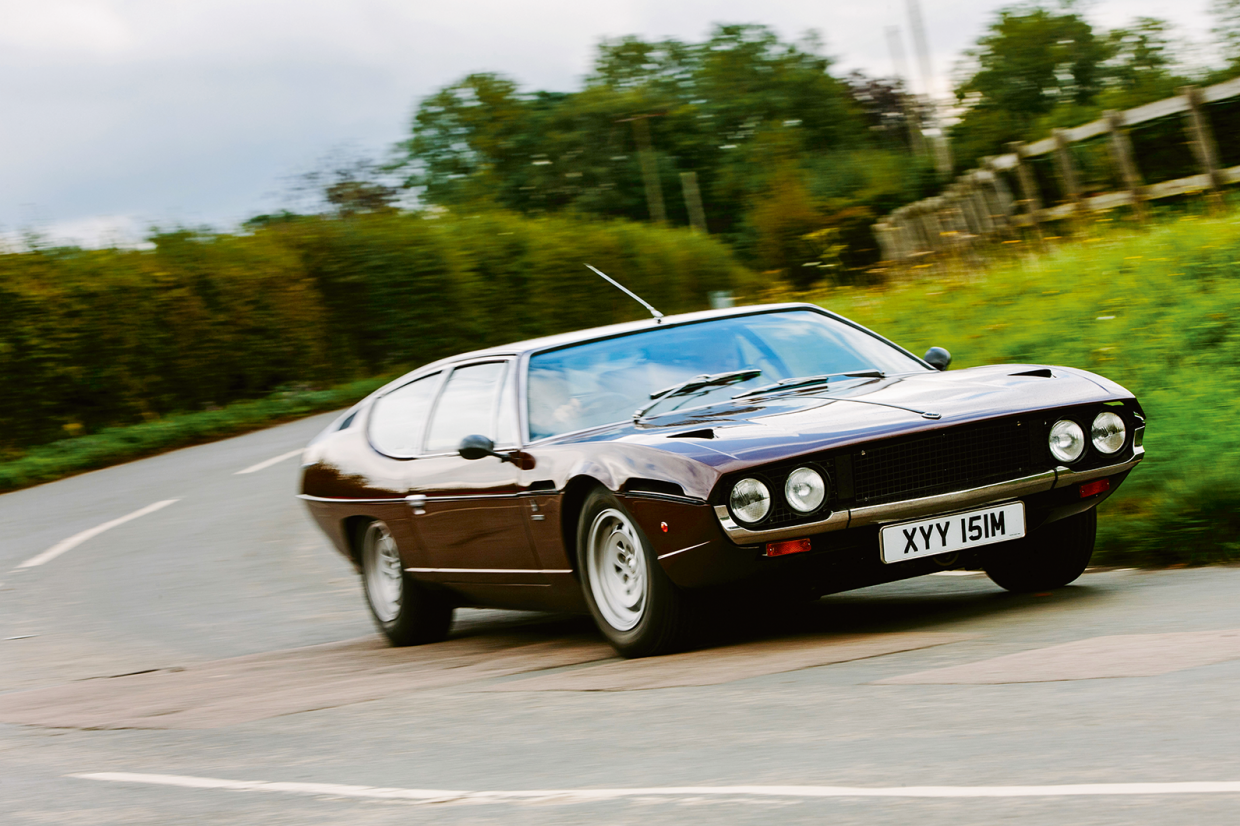 Disillusioned with the products of Maranello that he’d sampled, in 1963 he founded Automobili Lamborghini SpA and aimed the new company’s sights firmly at Ferrari and Maserati.

Just four years after the introduction of the 350GT, this automotive upstart would have three models in its line-up: the revolutionary Miura, the elegant Islero and extravagant Espada.

The bullish industrialist would no doubt have expected such progress and for his products to be competing for the adoration of the glitterati, yet it’s unlikely that he could ever have envisaged one as a family hatchback in a small Kent village. 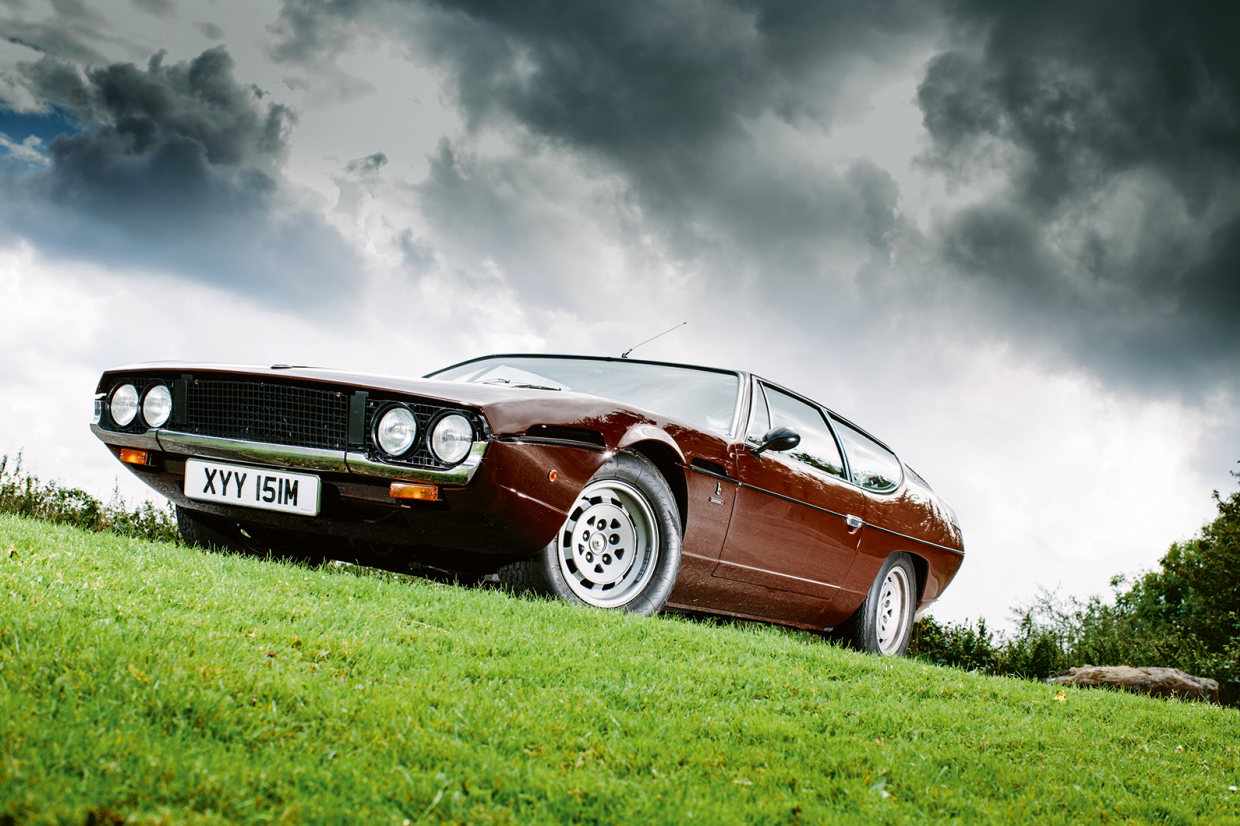 The Series III sports a longer nose and chequered grille

“My husband Richard had always wanted an E-type,” recalls Lynne Bull. “Until 1977, when he saw a black Espada in St Katharine Docks.”

By chance, shortly after, he caught sight of the car he would buy, parked in the New Eltham area: “A few weeks later he saw it again, in the Crown Woods Way Service Station showroom – there were three secondhand Espadas for sale – and when he came home, he said he had to have it.”

A “decent contract” with the gas board meant business was good for heating engineer Richard, so they set about planning the funds.

“Because it was a hatchback, technically he could use it for work,” says Lynne, smiling. “The finance people didn’t know that a Lamborghini was anything special and we spread the payments over 36 months.

“It was always the car, our everyday transport. We had no garage, so it sat outside. I used it to take the kids to school, visit the supermarket – the barriers were only a bit wider than the car – and drive to work on Fridays at the pub.

“There was a big skip at the side of the car park, and I’d tuck it in beside that. Regulars used to come in and say: ‘There’s a Lamborghini out there!’ They couldn’t believe it belonged to the barmaid.” 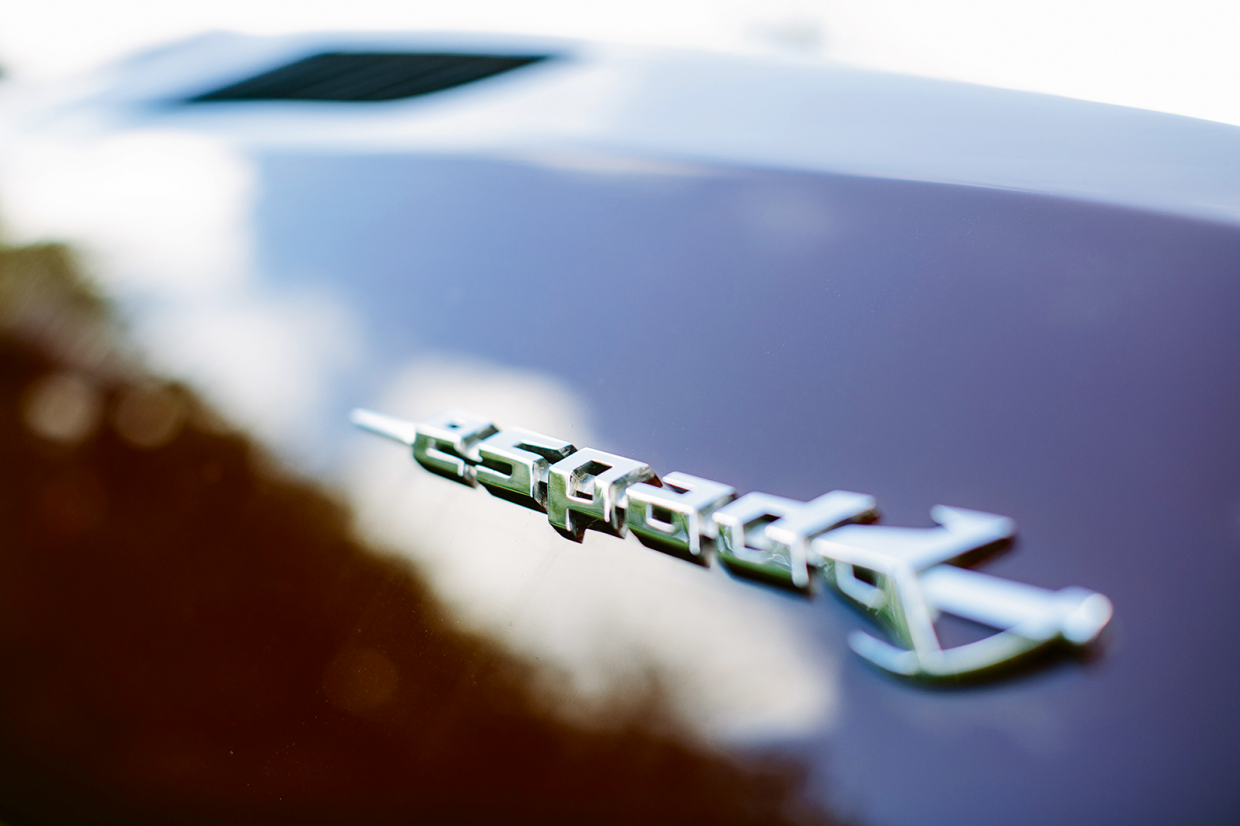 What a sight this Espada must have been as it competed with Allegros et al on the shopping run – there’d be no danger of the frozen food melting on the way home.

Lynne also has fond memories of popping her two boys in the back for the long blast down to Devon for family holidays, and of being there “in spectacular time”.

After her son had an accident in a work lorry, a traffic officer visited the house and spotted a photograph of the Espada.

“That’s a brown one, isn’t it?” he asked, remembers Lynne. “Richard informed him that it was one of only two in the country. ‘I’ll get the b*****d one day,’ the policeman replied.

“It turned out that he used to sit on the A2 and, by the time he radioed through to his partner, it had gone and couldn’t be caught – of course, it must have been the other brown one.”

In 1983, the silencers rusted through and, because nobody knew where to get replacement Ansa units, it was left outside – where it would stay – and they bought an Austin 1300.

Surely that must have been a comedown? “Actually, it was quite pleasant in many ways, because I could park it easily and it had four doors.” 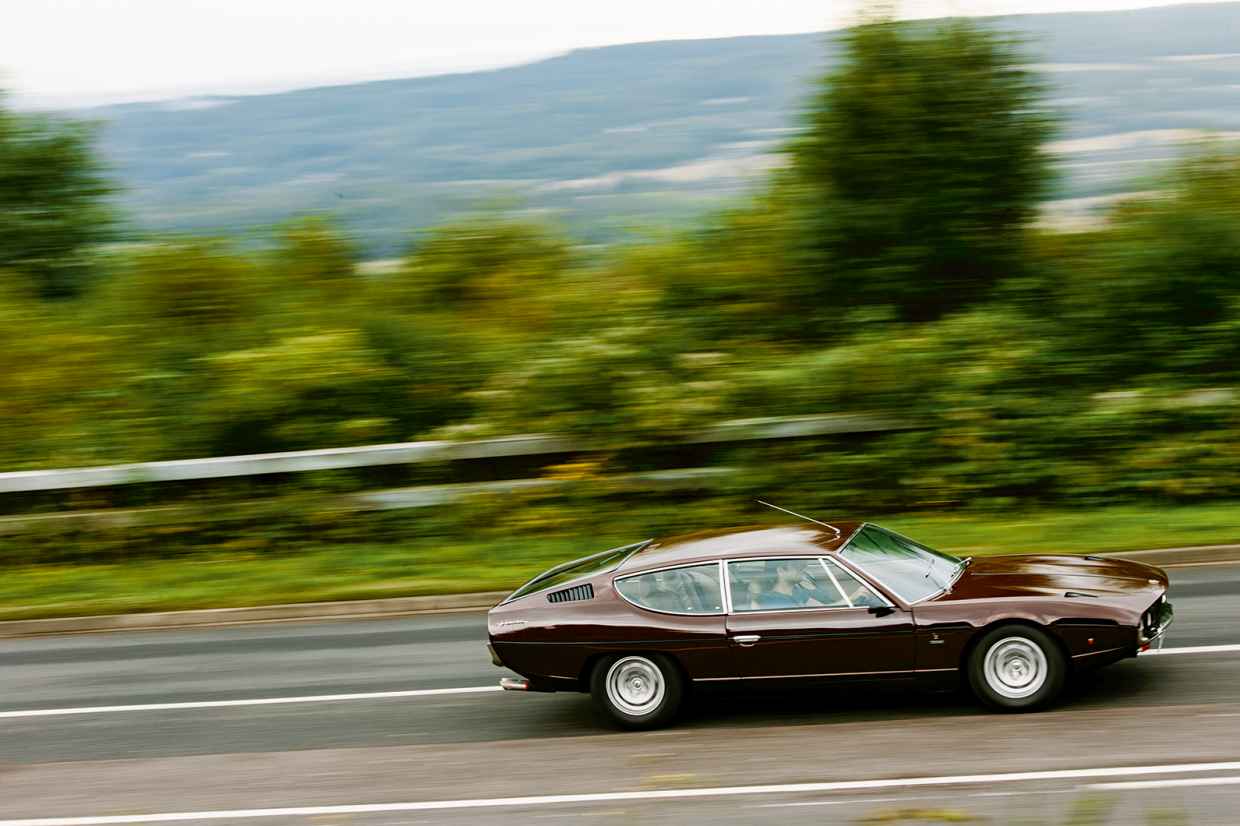 The Espada’s dramatic shape was inspired in part by the Marzal prototype – it, too, is a full four-seater

Five years later, the Bulls moved and had the Espada transported, where it took up residence in the garage and slowly became buried.

“Quite sad, when you think about it,” says Lynne, and a far cry from the glitz of the model’s launch.

Its unveiling at the ’68 Geneva Salon certainly had the wow factor. A master of publicity, the previous year Ferruccio had used the striking Bertone-styled Marzal prototype to whet the world’s appetite.

As the first true four-seater gran turismo, the Espada demonstrated the growing versatility of engineers Gian Paolo Dallara and Giampaolo Stanzani, while meeting their master’s demand for an innovative new model.

Its punt-style chassis – similar to the Citroën DS – of sheet steel pressings, foldings and large square-tube sections, was built by Marchesi and C of Modena. 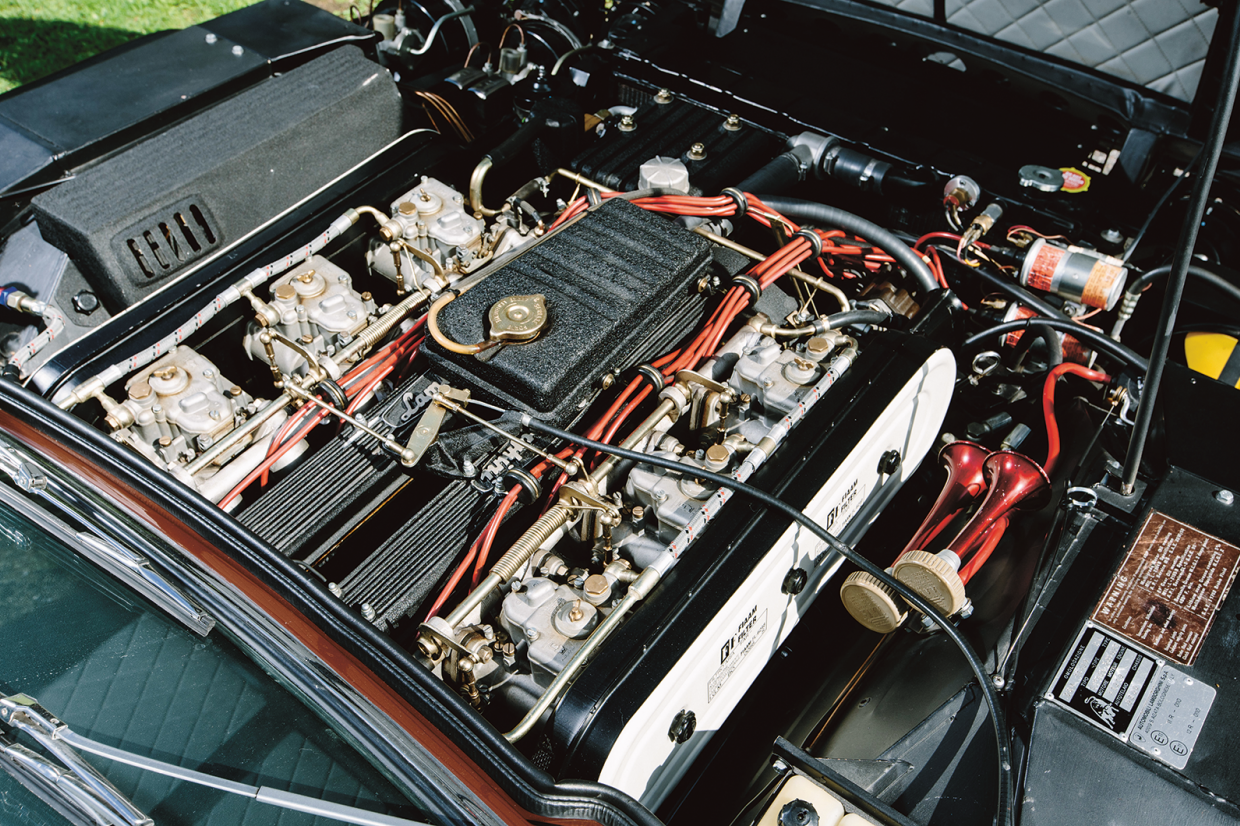 Power came from the exquisite Giotto Bizzarrini-designed quad-cam, four-litre V12, but mounted conventionally up front instead of the Marzal’s transverse rear set-up.

The adoption of six horizontal twin-choke Webers – instead of the Miura’s four triple-choke downdraught items – meant that at 325bhp it was 25bhp down, but this had a civilising effect… to an extent.

This luxurious express was endowed with supercar power, yet was capable of transporting four adults comfortably and returning 18mpg.

But it was the aesthetics that had everyone talking. Marcello Gandini’s design took styling cues from the Marzal and the Bertone Weekend Telegraph Pirana.

The former’s gullwing doors were deleted after complexity, and cost, nixed the idea. Stealthily low and outrageously wide, the Espada had a brooding and malevolent presence.

‘It deserved a prize for the ugliest car in the show,’ remarked Motor Sport’s Denis Jenkinson, after Earls Court in 1968.

Yet C&SC’s Simon Taylor, writing in Autosport on 15 April 1971, described it as ‘one of the most dramatic looking cars of all time’.

The buying public turned it into Lamborghini’s best seller over the next decade, as it shifted an impressive 1227 examples – numbers that wouldn’t be achieved again until the last Countach iterations, and Diablo 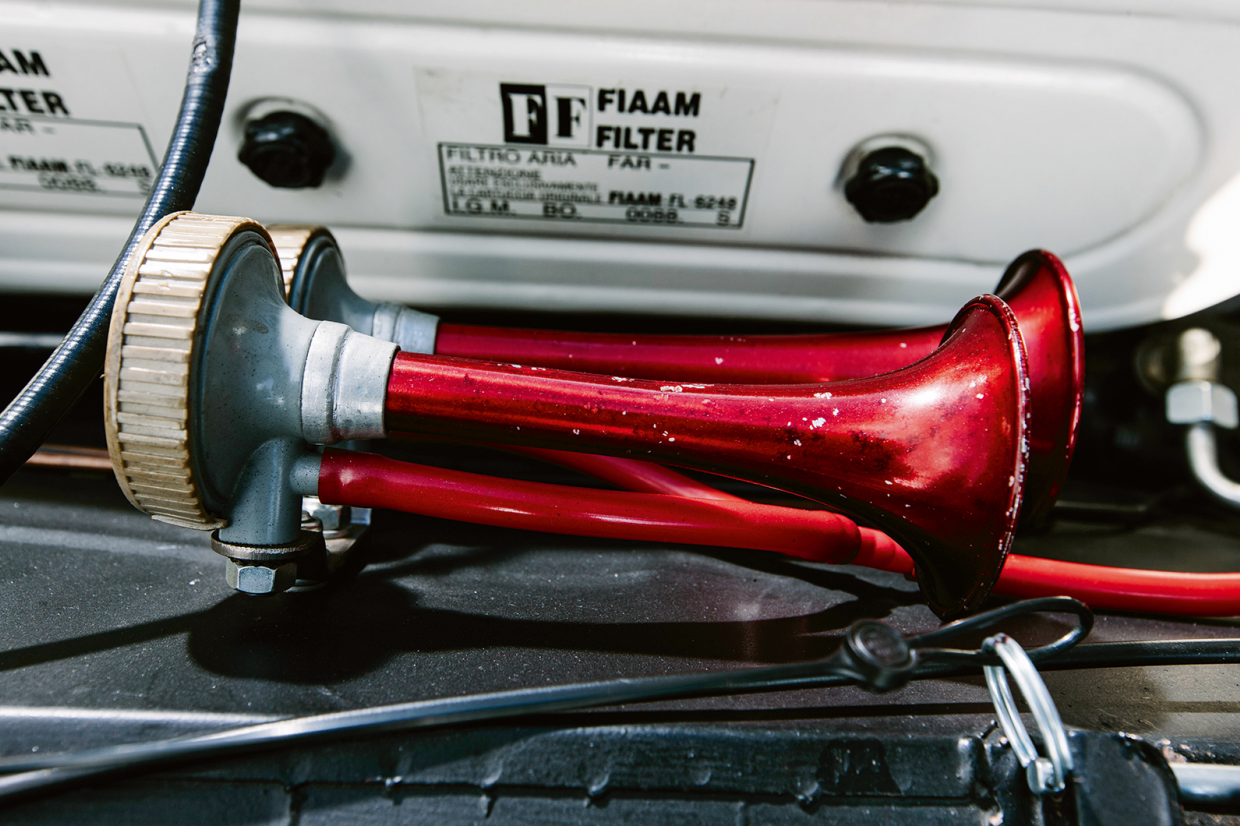 Twin horns and a Fiaam airbox

The Bulls began thinking about a restoration in 2001: “Richard had joined the club and we kept saying ‘one day, one day’, but life just drifted on.

“Eventually we spoke to Valentino Balboni at the factory and sent him photos. ‘About $60,000, worst case,’ he said. When the car got there, he phoned, in tears, saying ‘it is so bad’. The cost would be double, so we couldn’t afford to do it.”

Audi had bought the company, so a shift to working with the Euro – strong against Sterling – exacerbated the situation. Eventually, they decided that the factory would rebuild the engine and drivetrain; the cost in ’04 was €26,000.

They were also introduced to Bruno Paratelli, whose Ferrara-based firm made the original interior. He took everything out and remade it to the exact spec, including the unique leather perforations.

Once everything had been shipped home, the Bulls took a breather. In 2006, on recommendation, the Espada went to Jennings Engineering, in Essex: “Michael and Colin were great. We told them that it was a hospital job, and to take as long as they liked. They stripped it and sent us more than 1000 pictures of their progress.” 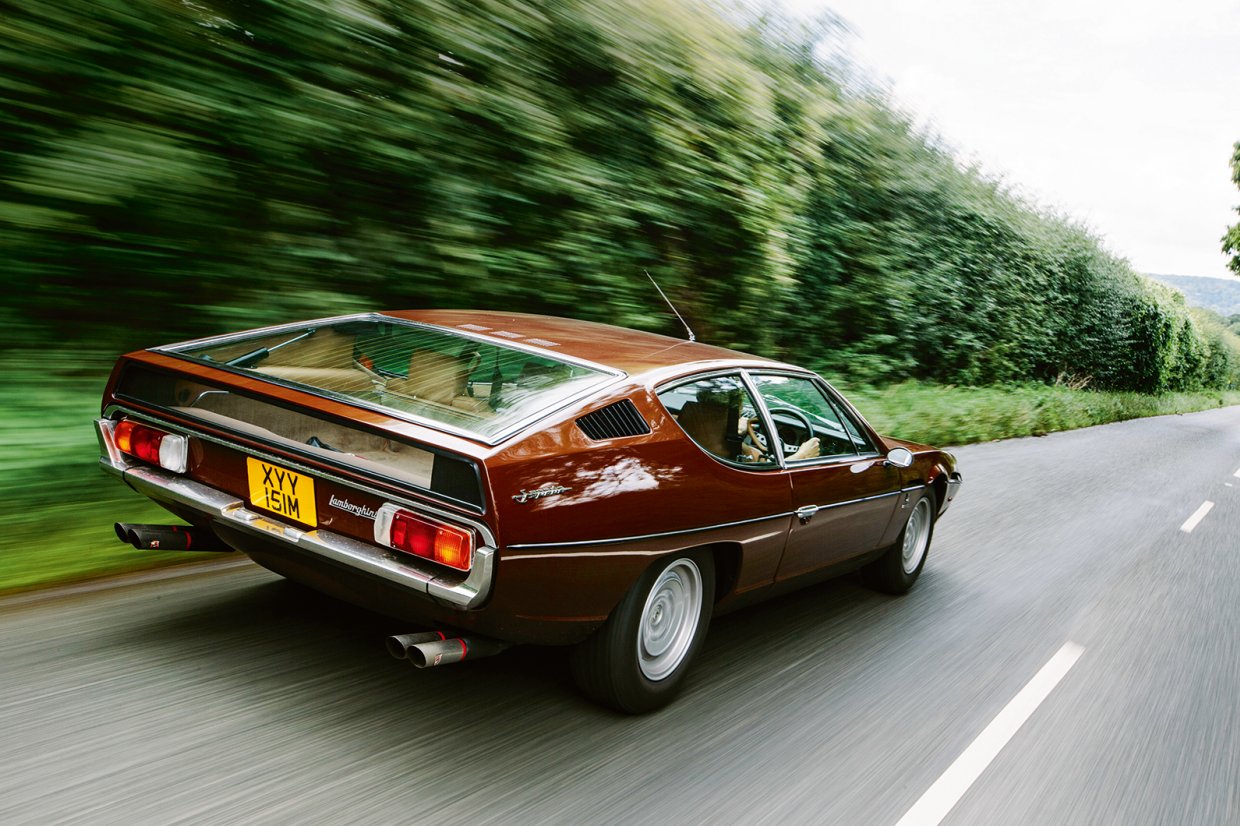 The Espada has well-weighted steering

In the meantime, Lynne set to sourcing parts: “Driver’s door glass cost £600 from the factory, and I looked everywhere for a windscreen until I spoke to Peter Swan at Pilkington, in Sheerness, who said: ‘Ah yes, I’ve made 17 Espada ’screens.”

The Carello lamps proved the most difficult: “I spent two years searching; there were plenty of left-hand-drive items, but no RHD ones.

“Then Richard was called out on Christmas Eve to a boiler breakdown, got chatting and mentioned ‘Lynne’s headlight obsession’. The chap had just been headhunted for a leading Ferrari agent, and in the New Year turned up at my house with two brand new 1971 lamps, still boxed and with £12 written on it.”

New Michelin XWXs came from a fresh Classic Tyres batch and the magnesium Cromodora alloys went to Lepsons, in Gillingham, for refurbishment.

After an epic rebuild, the Espada finally hit the road in September 2011. Richard promptly won the Lamborghini Club UK’s Car of the Year award.

Then disaster struck en route to the 2012 Classic Motor Show at the NEC. The Espada was rear-ended at a junction by a tow truck, as Lynne recalls: “The impact pushed us sideways, the nearside rear wheel broke and we ended up across two lanes and up a kerb.

“Richard had to climb out of the passenger door, because his had been pushed in by 4in. Luckily, we were okay save for some lumps.”

“The insurance firm wanted to write off the car, but specialist Bob Forstner made us a wonderful offer. He’d take it to his facilities in Germany, jig it, geometry test to check the damage wasn’t too severe, prepare a quote, and return it free of charge if we didn’t want him to repair it.”

It was collected on 24 February 2013, and returned on 4 September, just in time to earn third in Salon Privé’s 50th Anniversary Lamborghini class. 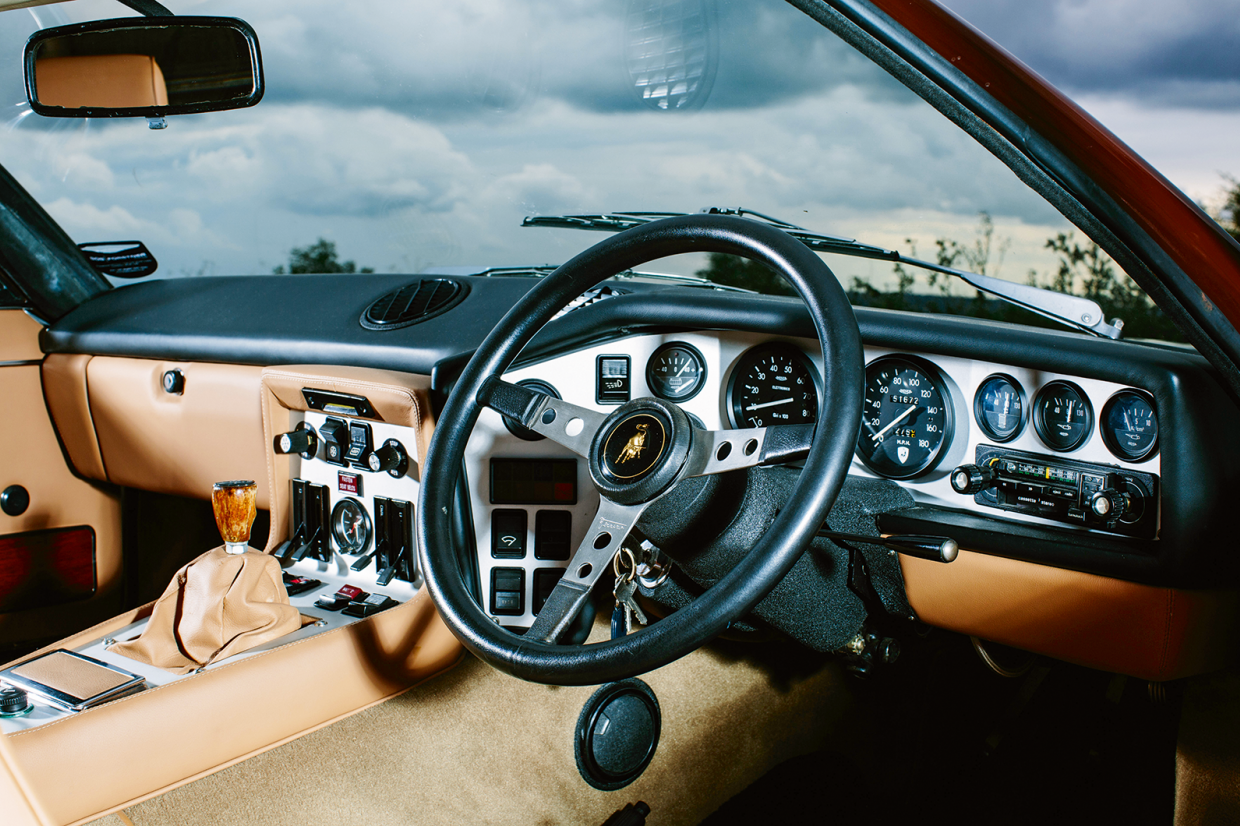 The Series III features an L-shaped dash panel full of Jaeger dials – this car’s cabin was exactingly retrimmed by Bruno Paratelli, who did the originals

As a Series III, this Espada benefits from the previous version’s 350bhp high-compression engine plus power-assisted steering, which ensures that this behemoth is very simple to manoeuvre.

Inside, it feels quite like a Maserati Ghibli SS, even with a similar handbrake – you can’t engage it when belted in. Lynne “used to avoid hills like the plague”.

Yet here you have four full seats, and ride a stunning V12. It’s so under-stressed that you can trickle through villages and towns barely ticking over.

Hit the throttle, though, and the rear squats instantly, releasing a vicious surge of torque, and a glorious noise.

The induction roar from the carburettor sextet competes with a quad Ansa tailpipe wail for your attention – show me another hatchback that sounds like this.

The longer you drive this car, the more that large body seems to shrink. With a wide track, low centre of gravity and chunky rubber, it’s so planted, with little body roll.

The gearshift is the only weighty control, yet you always return to that addictive throttle. That thunderous school run must have been something else: “Both of the boys love the car, but it wasn’t until much later they told me they did feel a bit conspicuous.” 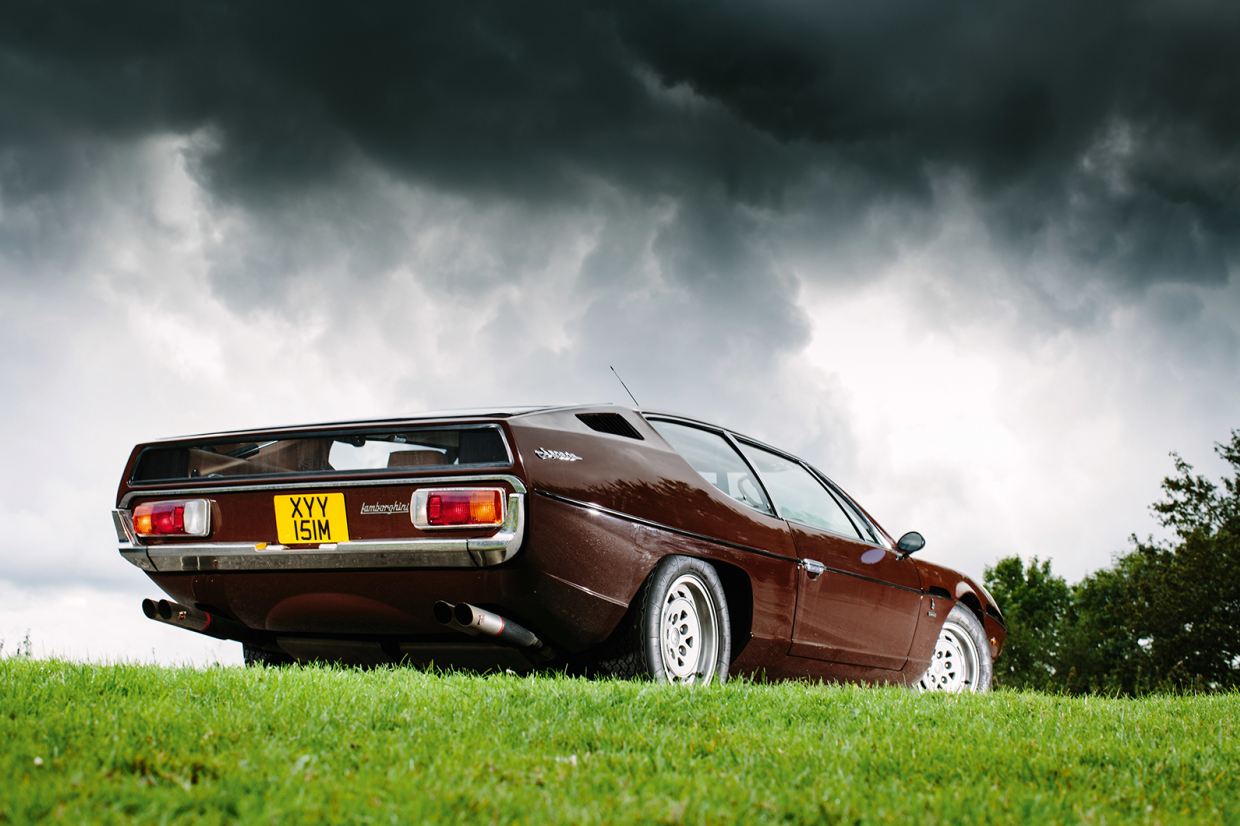 For the Bulls, restoring the Espada was inevitable. “I decided that it would be my grandson’s inheritance,” explains Lynne. “When he was 10, he was diagnosed with a brain tumour. Kings removed it, and the Royal Marsden has been treating him for the past eight years. Thankfully, he recently got the all-clear – we’re eternally grateful. Trouble is, I have three grandsons, so now he’s fully fit they’ll have to fight for it.”

All that the Bulls have been through shouldn’t have been a complete surprise, though. In its July 1969 test, Road & Track concluded: ‘The striking thing about the Espada is that, for all its purposeful looks and legendary V12 performance, it’s a reasonably practical family car.’

But there’s one last thing that I need to know… did they buy a Lamborghini because of that surname? “No,” smiles Lynne. “We just loved the shape.”

Thanks to Lynne and Richard Bull, Lamborghini Club UK

This article was originally published in our November 2015 issue

A beauty and a beast: driving the Lamborghini Diablo SE30

The unholy trinity: Bugatti Chiron vs Veyron vs EB110 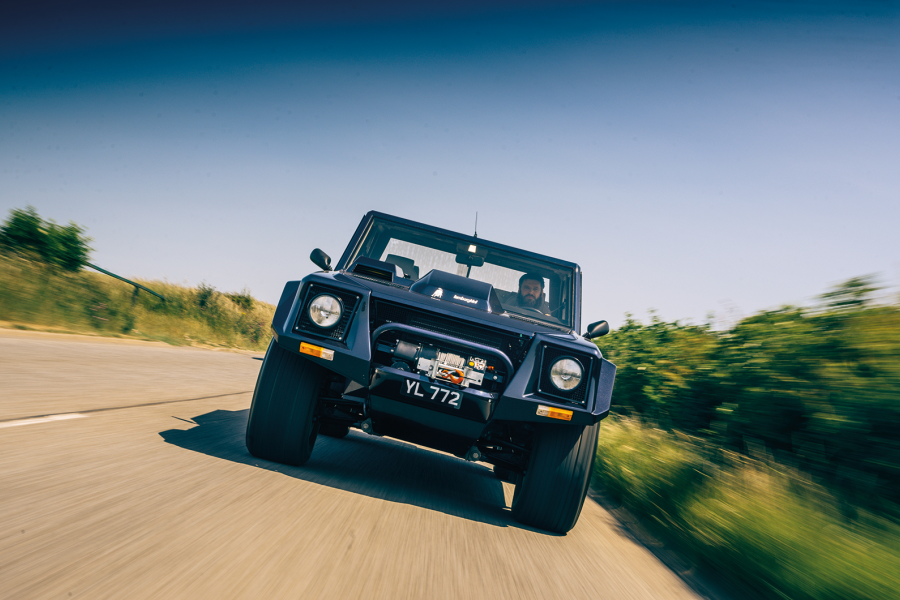 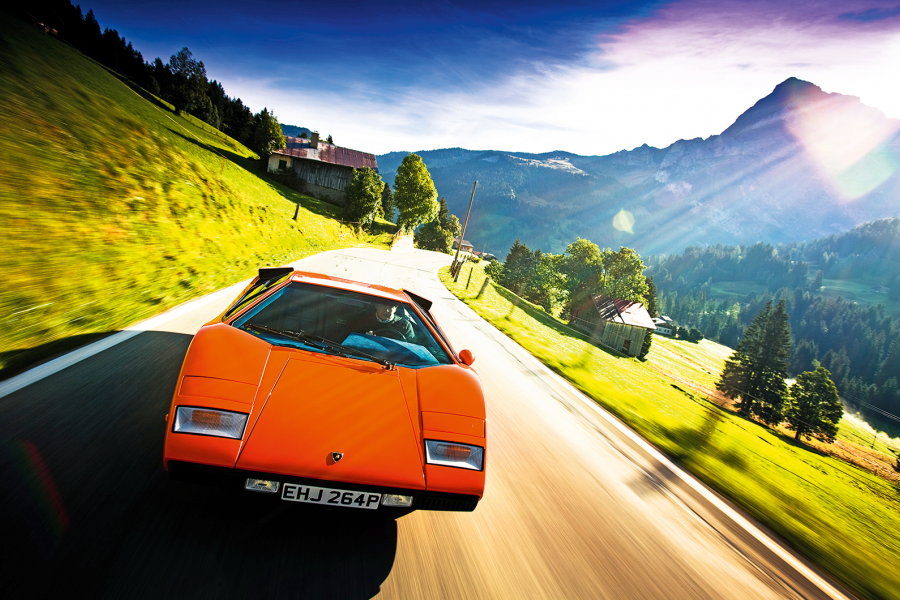 Why the allure of the Countach is more than skin deep 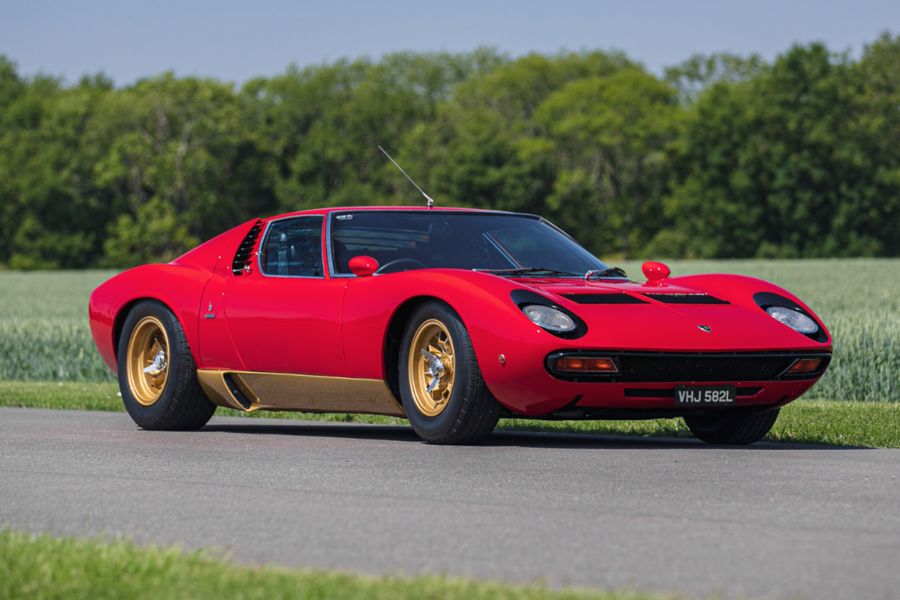 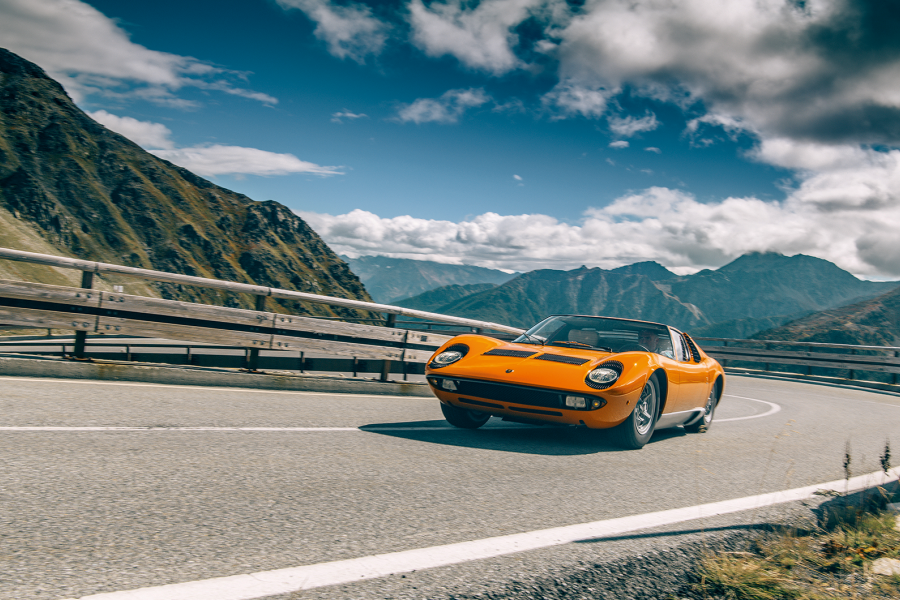