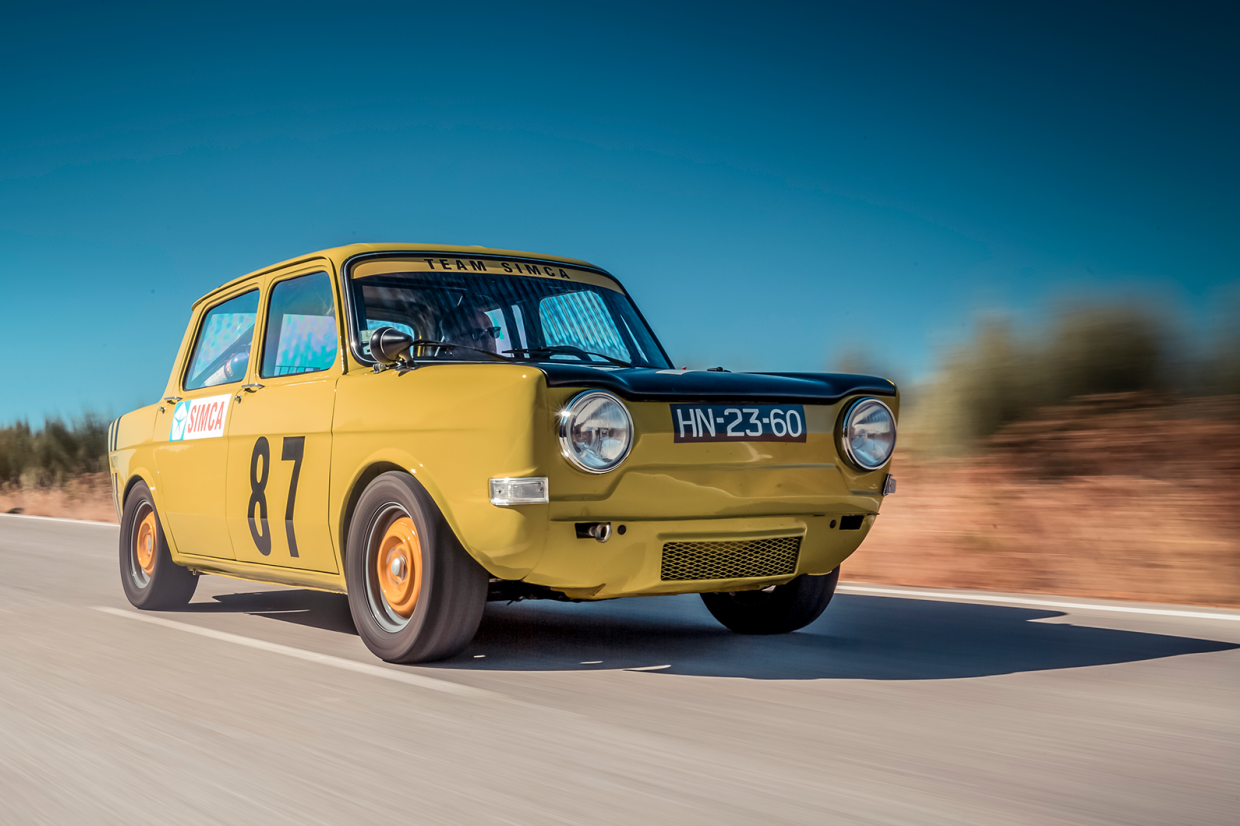 The road stretches from here to who knows where.

The backdrop, a mountain range, isn’t just big, it defines bigness, your main points of focus being the battered Armco and the steepest of drop-offs.

This isn’t the ideal place to be analysing a racing car that is precious rather than merely valuable. All eyes are on you. 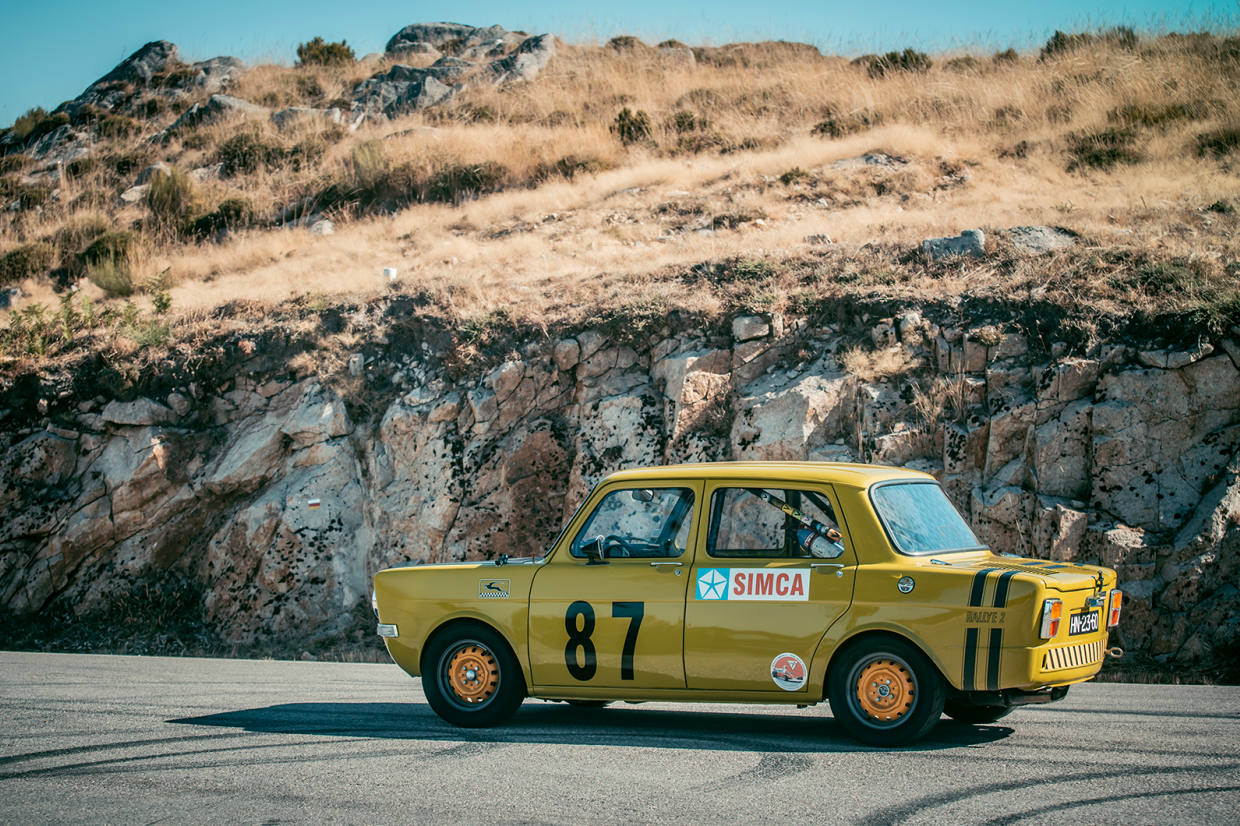 The Team Simca badging is a tribute to works fettling

The unruly cacophony from out back crowds all other thoughts; the 1.3-litre four-banger sounds implausibly potent despite its mere 86bhp.

There is nothing so sissy as sound-deadening here. Throw in super-sticky tyres and unyielding dampers, and all sense of normality evaporates.

The car’s owner, João Lacerda, likens his Simca 1000 Rallye 2 to a go-kart, and the analogy is apposite. 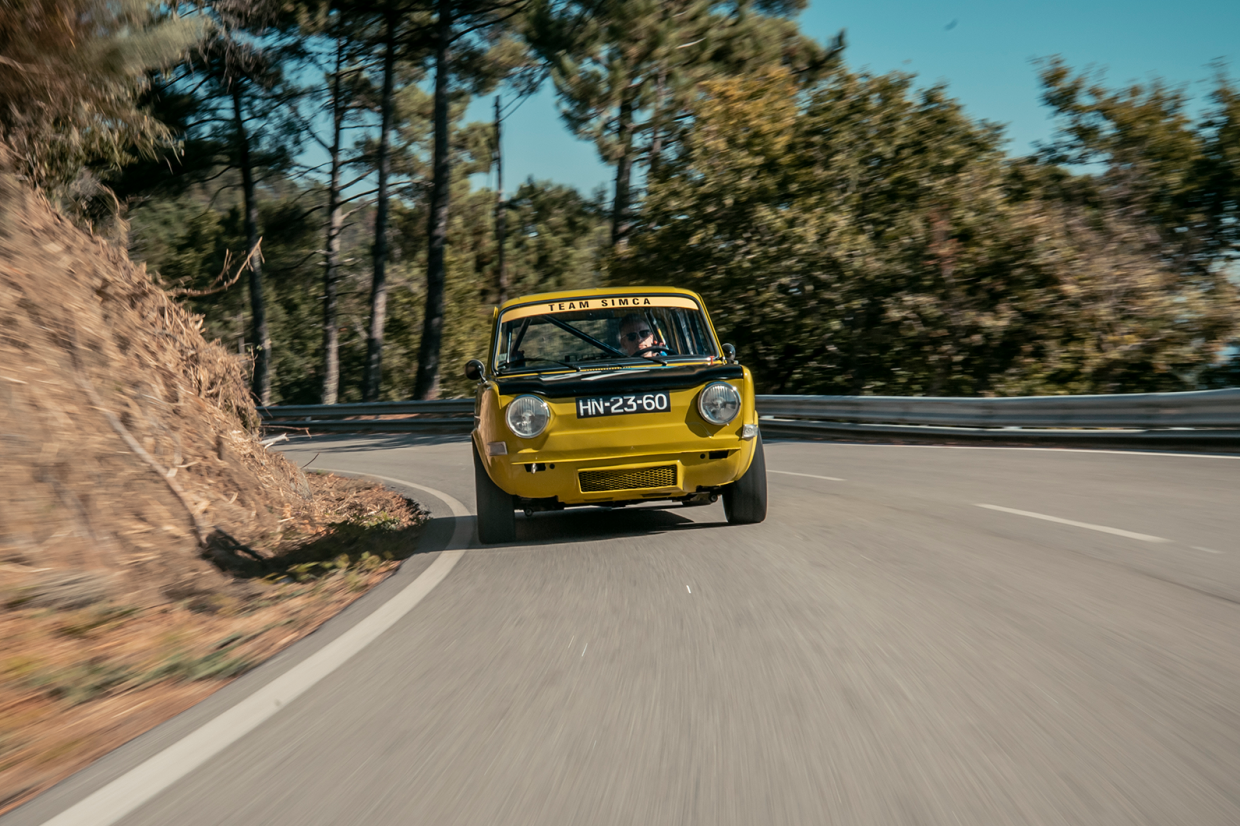 It really is a hoot to drive

It sounds busy, the twin Webers gurgling and spitting, the blare from the exhaust being commotion itself.

The shift movement of the four-speed ’box is short across the plane and a little vague with it. As such, it’s easy to grandma your gearshifts, should you try and rush it.

The pedals are spaced in such a manner that you contort your ankles to an unnatural cant to double-declutch effectively.

With little weight over the front, the Simca darts back and forth, the steering ultra-direct if not overly communicative. And then you relax, loosen up and begin to understand its foibles. 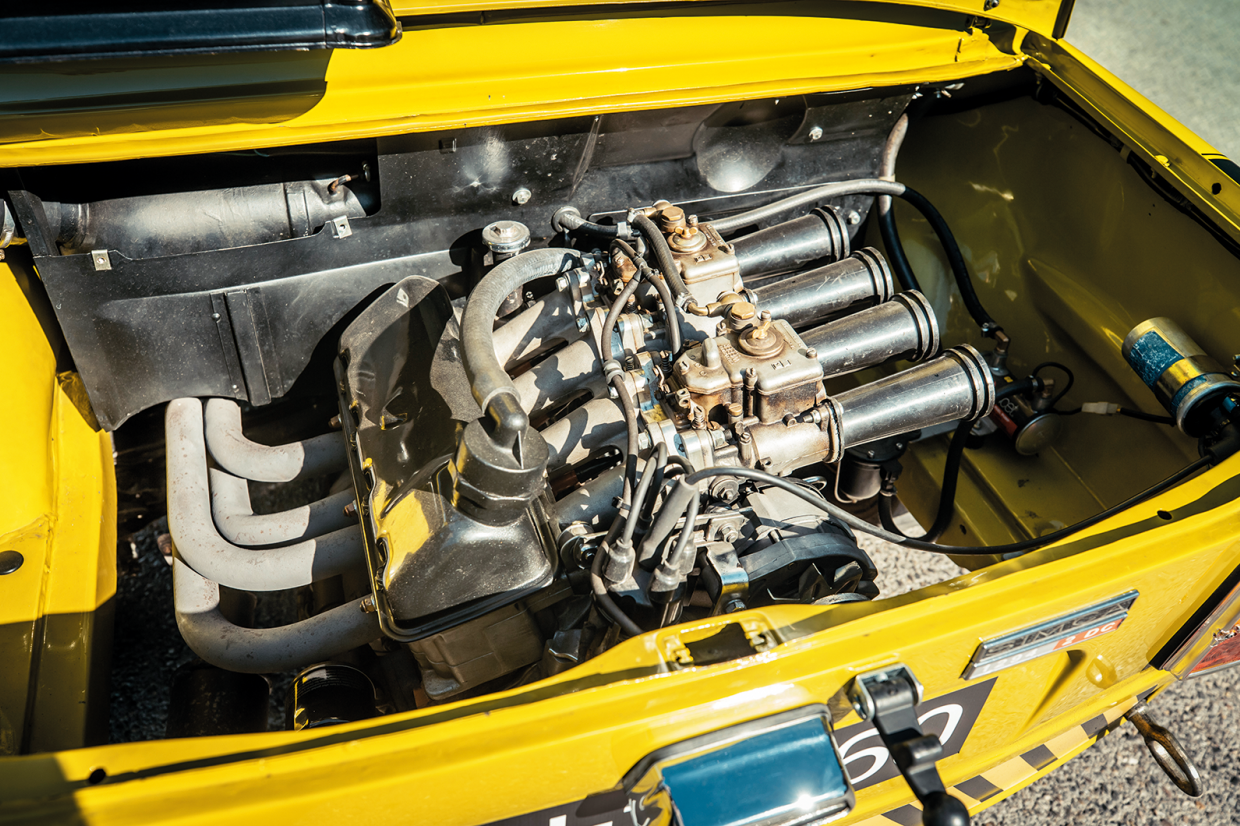 Lacerda is nothing if not generous; many among our party have had a go in this car and they all rave about it.

After half an hour spent blatting the Simca up and down a hillclimb course, your appreciation of this little buzzbomb soars.

It feels agile and free from heft, but it does weigh only 860kg or thereabouts.

It is huge fun, even if you struggle to outrun most locals in their well-driven hatchbacks – the course is a main thoroughfare through Caramulo during weekdays. Local knowledge – and talent – is everything. 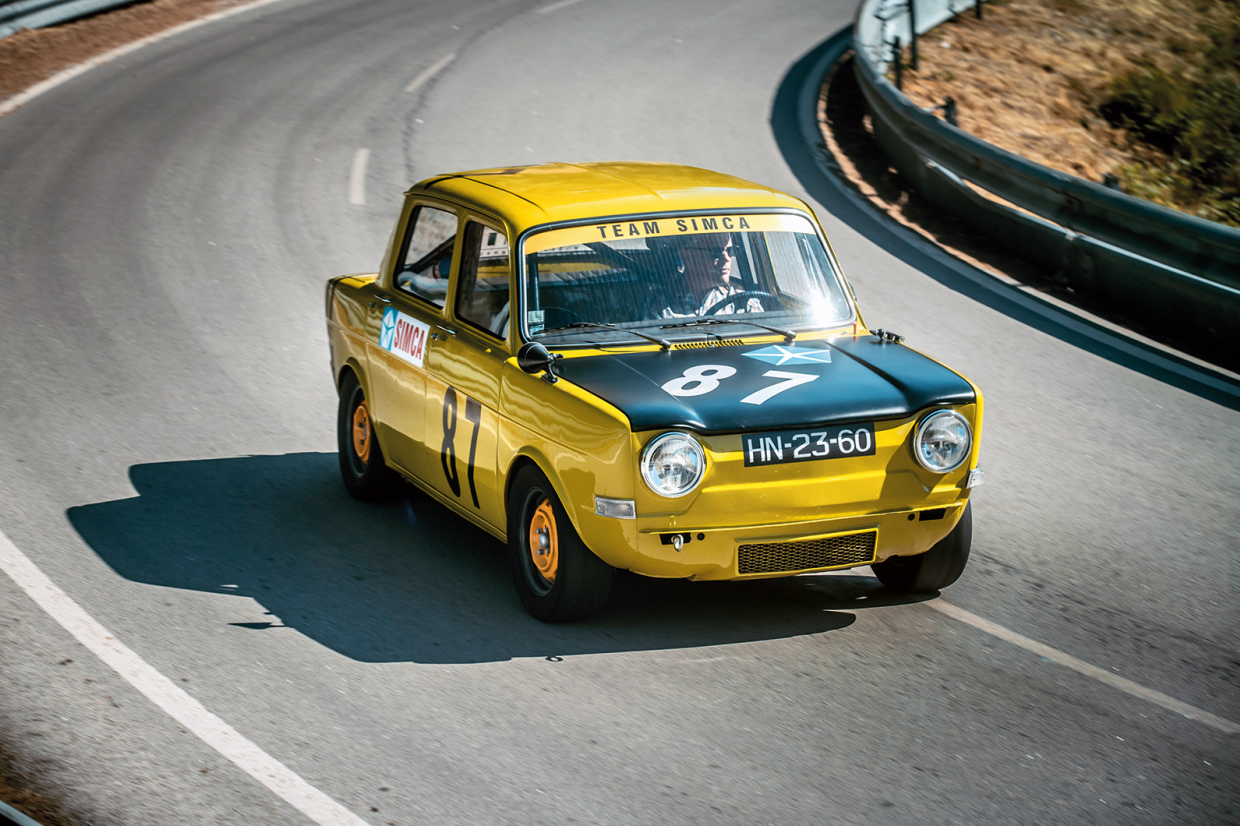 For Lacerda, this beautiful area of northern Portugal is home, and his route to and from work.

The Simca has seen plenty of action at this historic venue since its restoration was completed in 2011, too. It isn’t pampered, that’s for sure, but Lacerda has invested far more in its renaissance than money alone.

This car is a familial touchstone. It was raced in period by his father, Jerónimo, who sadly lost his battle with cancer at a tragically young age.

Buying the car and returning it to era-correct perfection became an almost Ahab-like obsession. 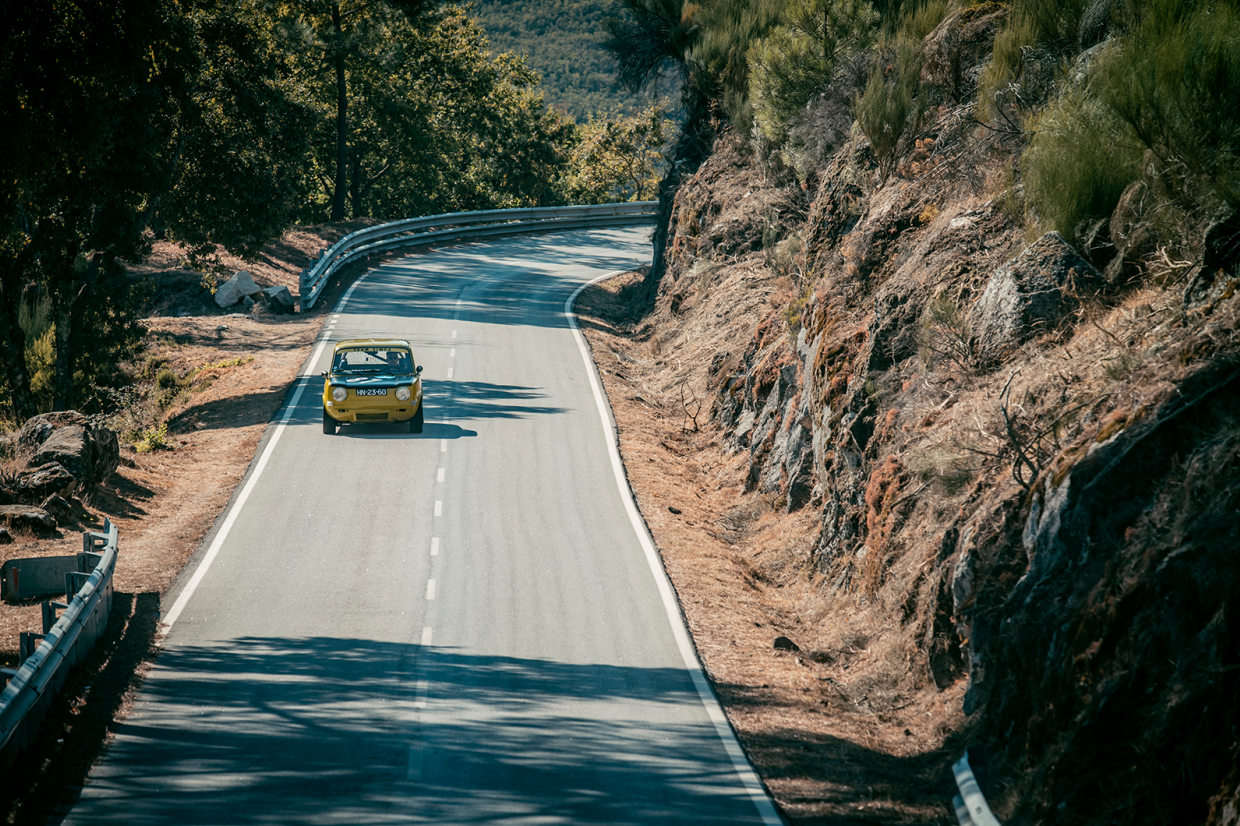 “My father lived in a world of classic cars and motor racing,” says Lacerda.

“His father, João, was the founder of the Museu do Caramulo and participated in several events at Vila Real and other Portuguese circuits.

“He also went to internationals at places such as Brands Hatch, Silverstone and Monaco as a spectator, and often took my father with him. He then began racing in 1971 when he was 21, in the Datsun 1200 Trophy.

“The series was very popular at the time, and Portuguese stars such as Francisco Fino, Manuel Gião, Quico Ribeiro da Silva and Joaquim Moutinho started out in the championship. It proved competitive because the cars were run in near-standard Group 1 spec.

“My father’s racing was interrupted at the end of 1972 when he went to fight in the Overseas War [also known as the Portuguese Colonial War] in Mozambique. He tested sporadically whenever he was in Portugal, but didn’t race.” 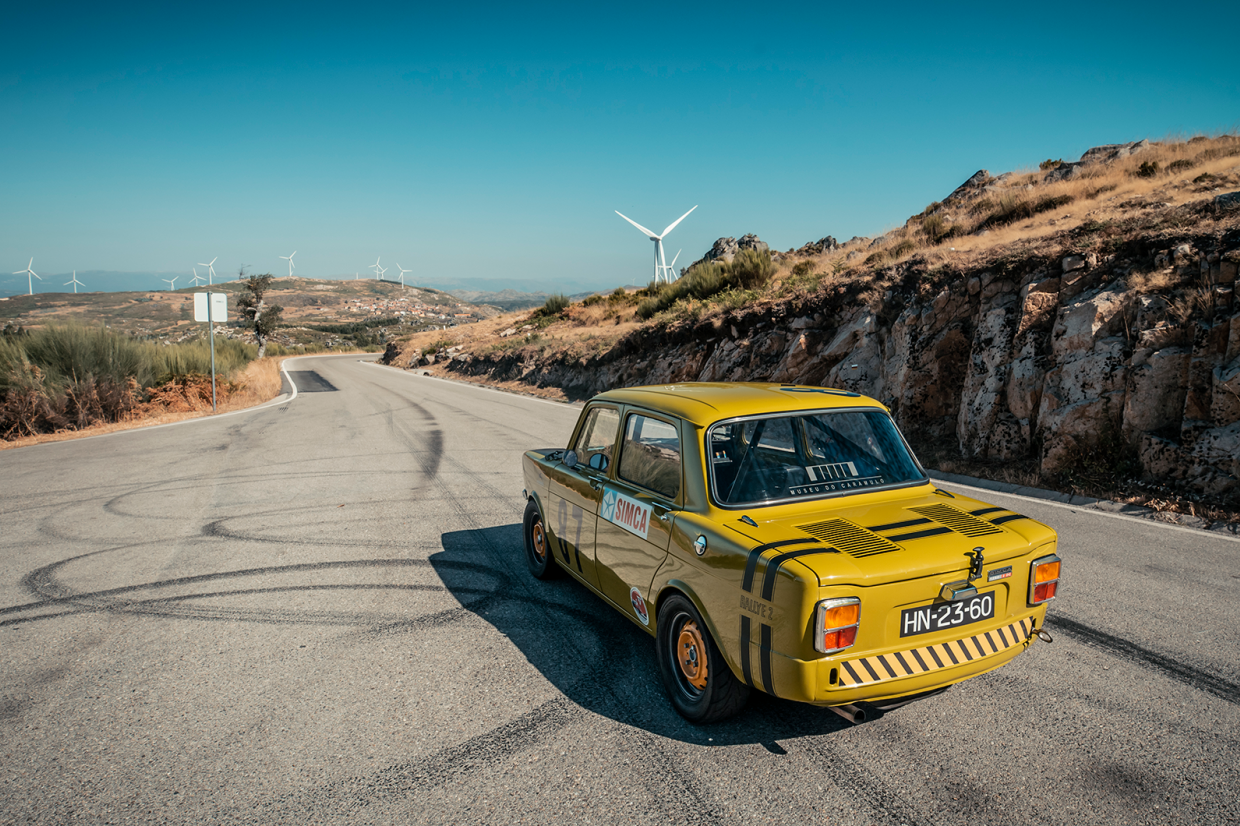 The work paid off – it wears its race trim very well

He returned to the track in anger for 1975 in the national touring car series aboard his daily driver, the Rallye 2 that had previously been campaigned by Santinho Mendes.

“My father would change to slick tyres when he was at the circuits,” Lacerda says.

“Otherwise it was a Group 1-spec car so, again, largely unmodified apart from safety things such as the rollcage.

“He raced in the 1300cc category, and made his debut at Estoril in July but was forced out by a puncture. A month later he ran it at the Vila do Conde street track on the Algarve, known by some as our Monaco circuit, and won his class.

“He then decided to invest a little bit of money and sent the car to the Simca Racing Team in Lille. At that time, the Simcas were very competitive against larger-engined cars and my father’s Rallye 2 received some upgrades. Unfortunately, he didn’t get a chance to race it.” 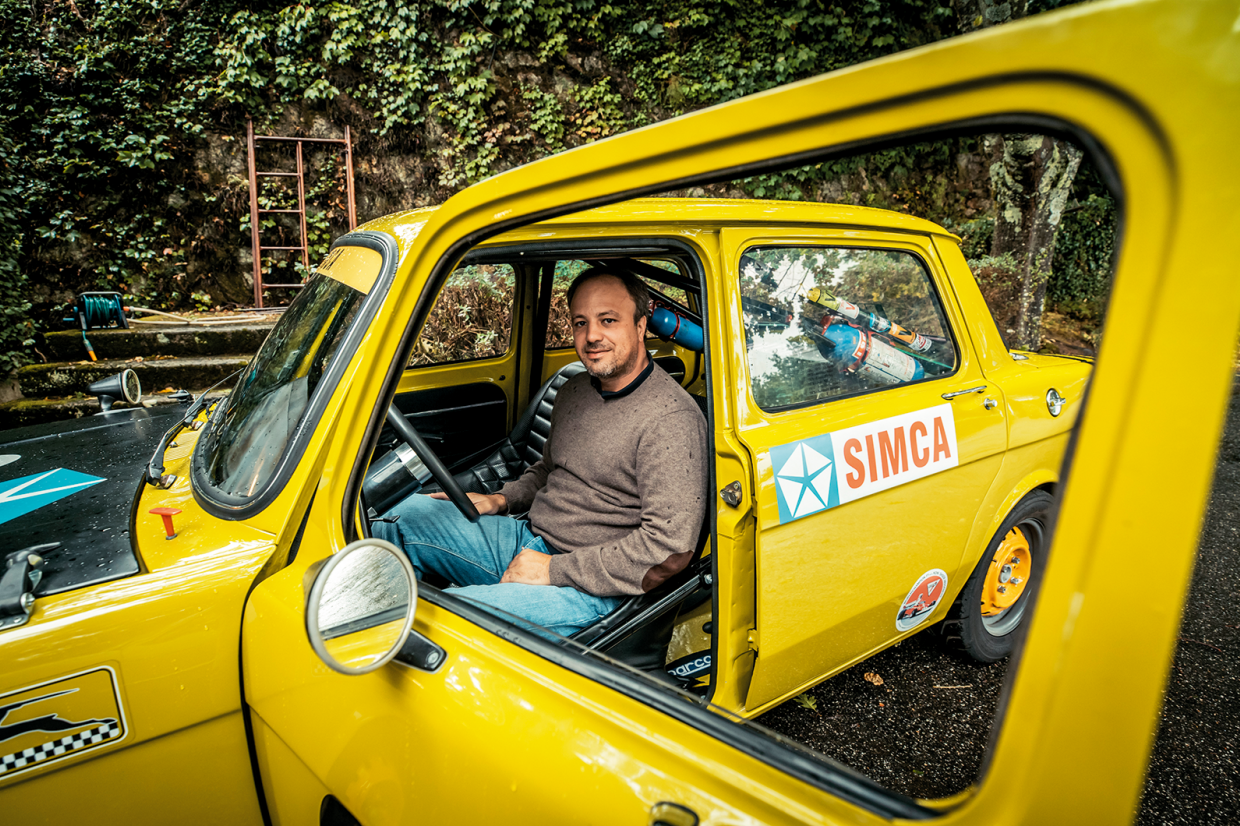 Ravaged by his illness, Jerónimo became an onlooker as his newly hotted-up Simca returned to the race track at Estoril in late 1976.

“He asked João Nabais to drive it in his place. He dominated the class but gave up his place to [fellow Simca runner] Edgar Fortes on the last lap,” Lacerda says.

“Edgar was fighting for the championship. My father was just 25 years old when he died. My grandfather then sold the Simca to a dealer in racing cars.” 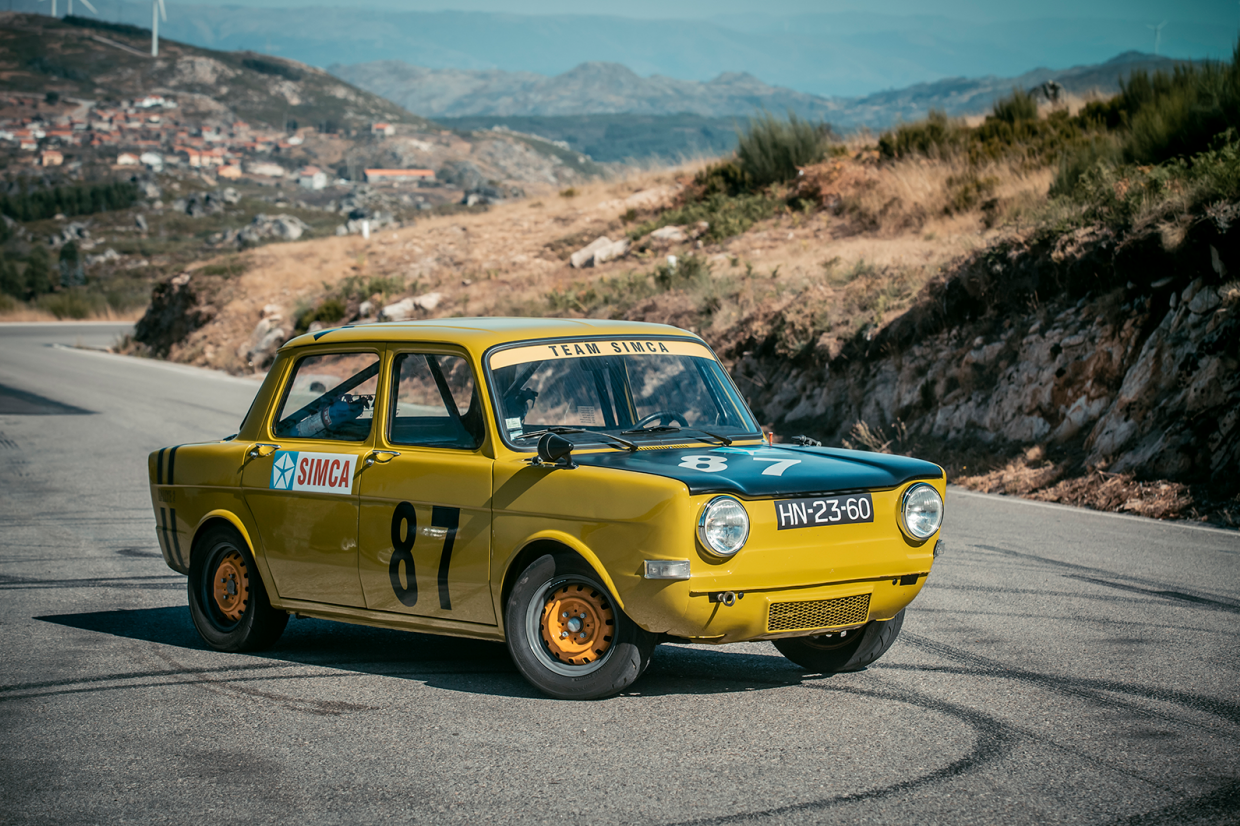 The Rallye 2 racked up more silverware, subsequent keeper António Adam loaning the car to Fortes for a hillclimb staged in Penha in 1977 after his own car had been thrown out of scrutineering. He won his class.

The Simca continued to be hillclimbed and raced into 1977, with Adam entering but failing to finish the following year’s Estoril 500km.

Ownership then passed to veteran all-rounder and sometime Hillman Imp and Clan Crusader driver Veloso Amaral, who developed the car yet further and even entered the 1983 Portuguese Rally, a round of the World Rally Championship.

It didn’t last the distance. The old stager was active as late as ’85 before it was finally pensioned off. 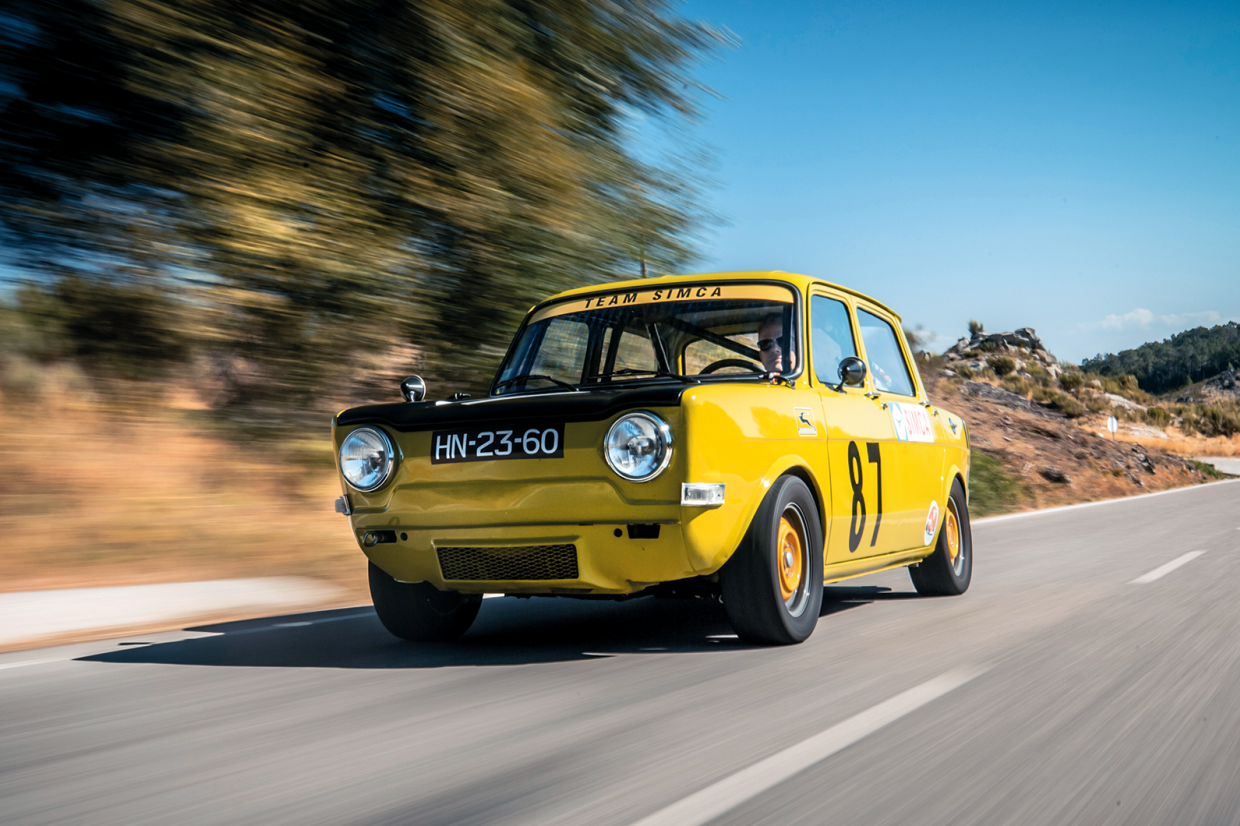 It is certainly an eye-catching sight

For João Lacerda, finding his father’s old car had been at the back of his mind until his cousin Tiago was tipped off as to its whereabouts in ’94.

“I had seen photos and home movies of my father racing the Simca,” Lacerda recalls, “and I was sure the car would one day be mine. I just didn’t know when.

“It had been owned by two other guys after Amaral and one day Tiago handed me the name and details of the person who now had it. I was 18 years old at the time and contacted him immediately.

“The car was in Tomar, central Portugal, and was in good condition, but the owner didn’t have much interest in selling it. I had to be patient.” 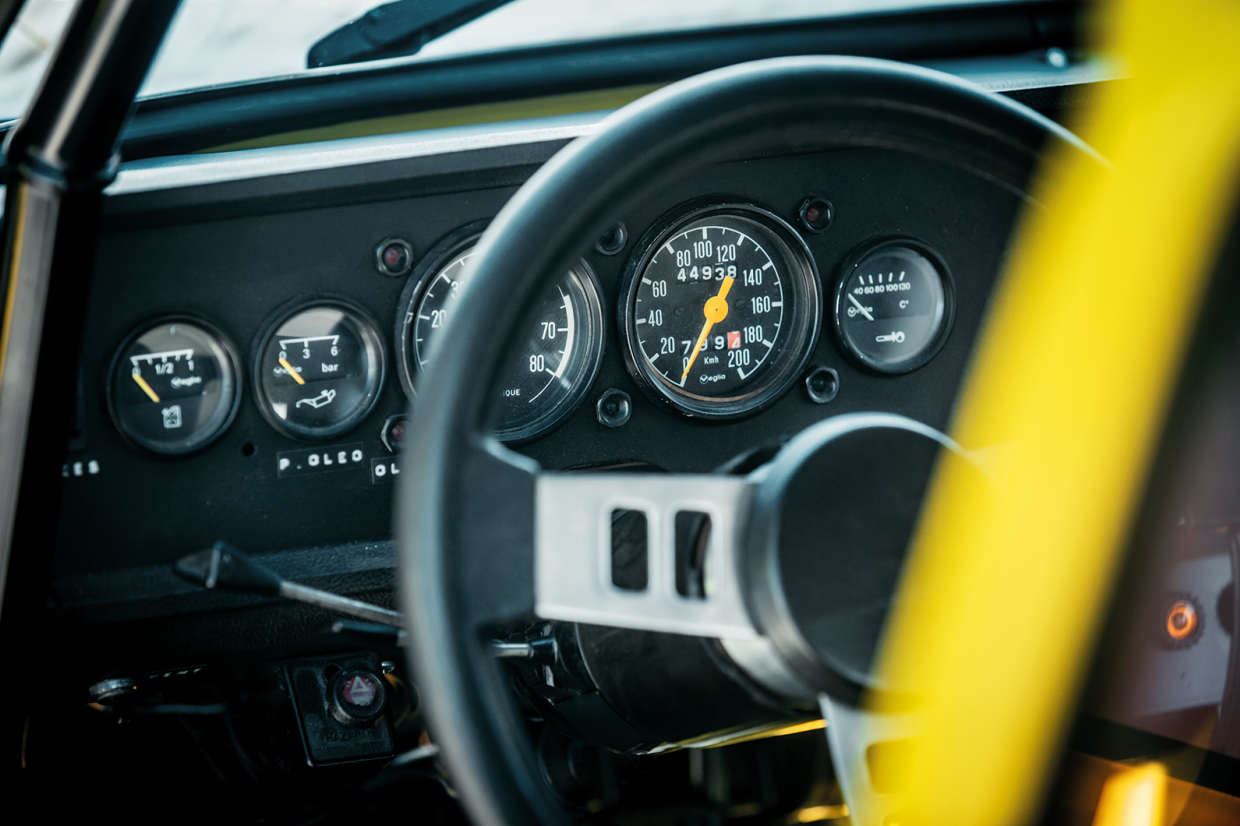 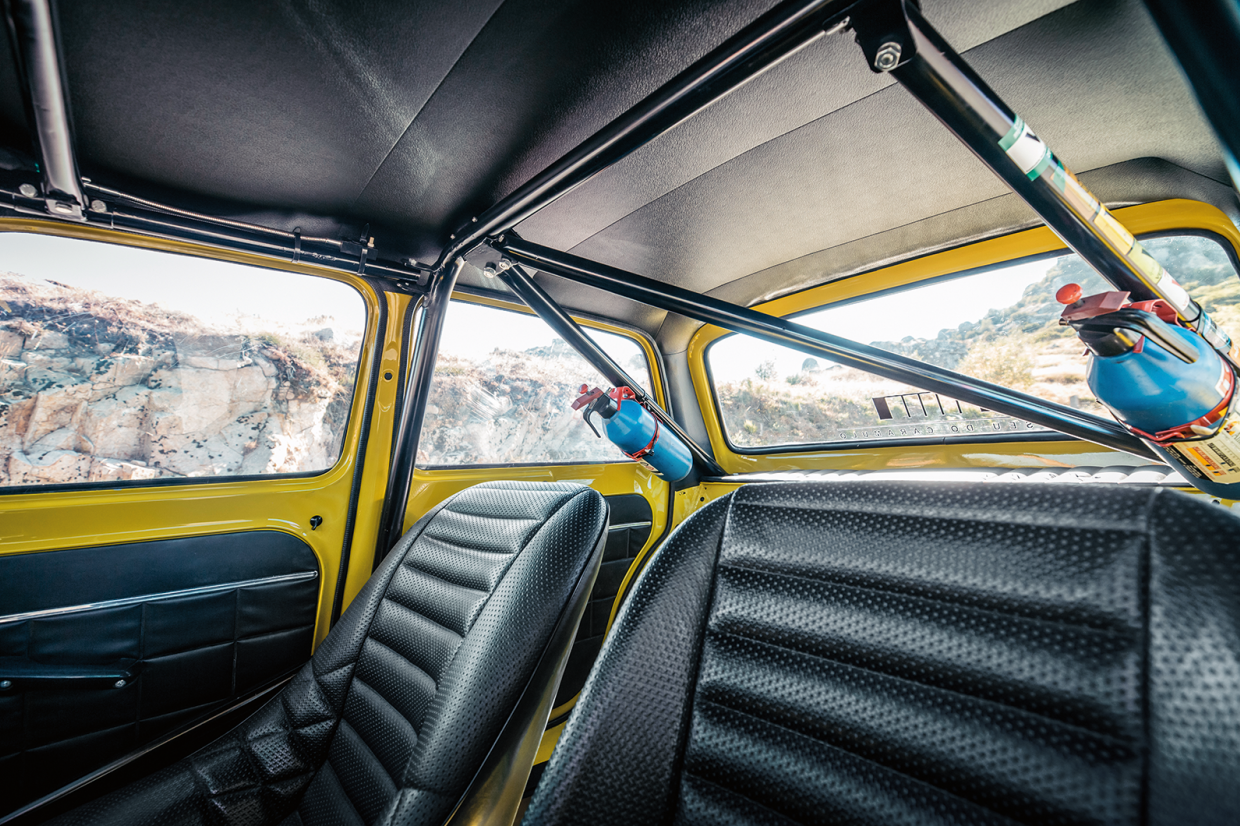 The dials are a nod to the track, while the original extinguishers represent Lacerda’s exhaustive work

Cue an agonising 13-year wait: “At the end of 2007, he contacted me regarding some parts for another car. I made him an offer for the Simca and a week later it was back in Caramulo.”

While in remarkably sound, rust-free condition, the car had been accessorised with all manner of trinkets, not least Rallye 3-style plastic addenda. “It had been disfigured!” Lacerda laughs.

“In 2009, the restoration adventure began, the initial stripdown taking place in the private workshops of the Museu do Caramulo.

“However, I sent the engine to Lisbon to be restored by a real expert in this sort of car, Tobias Martins.” 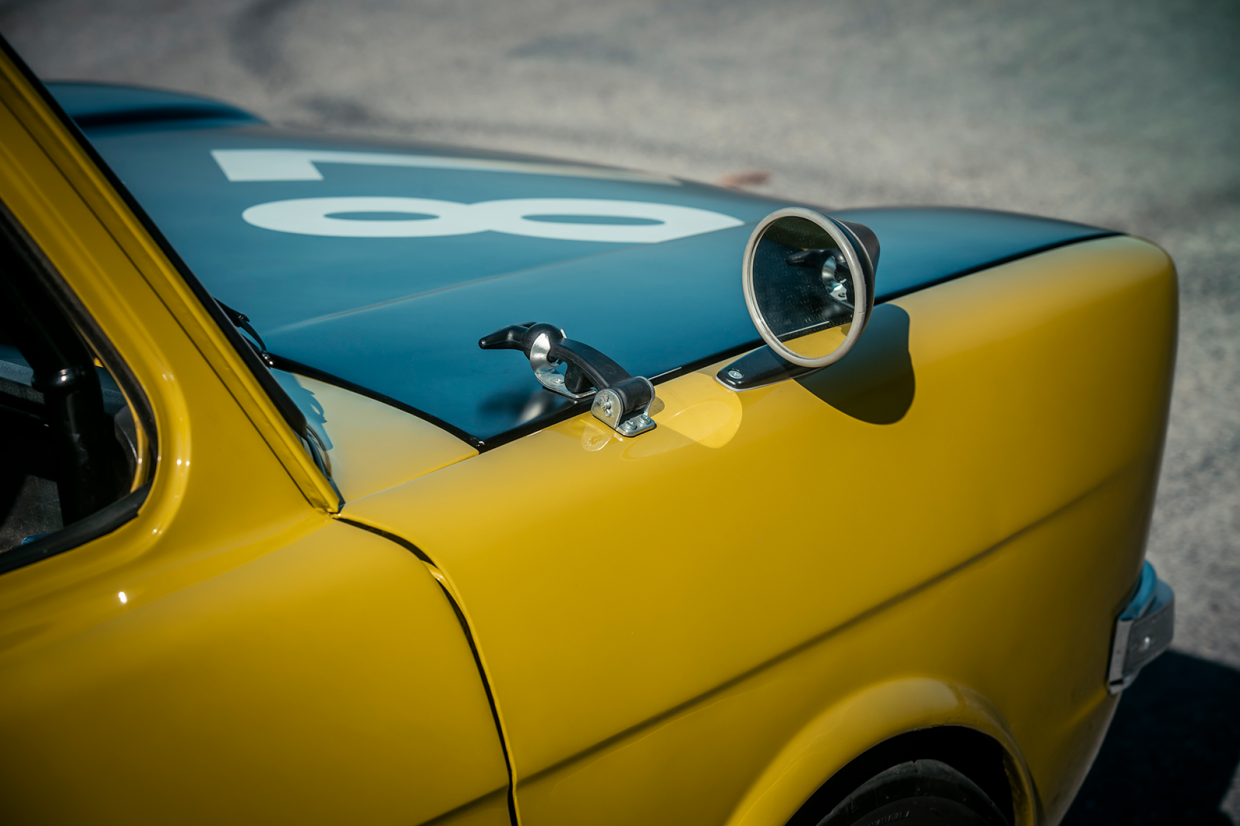 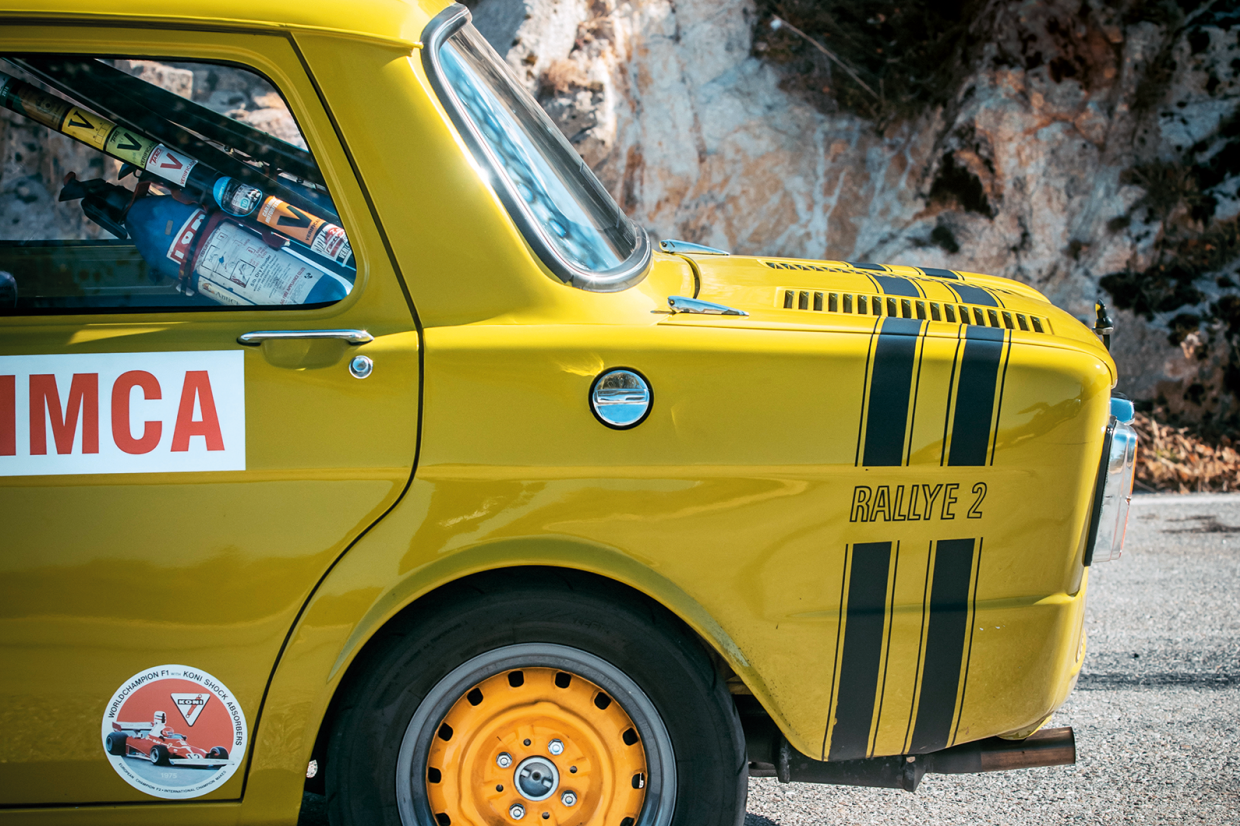 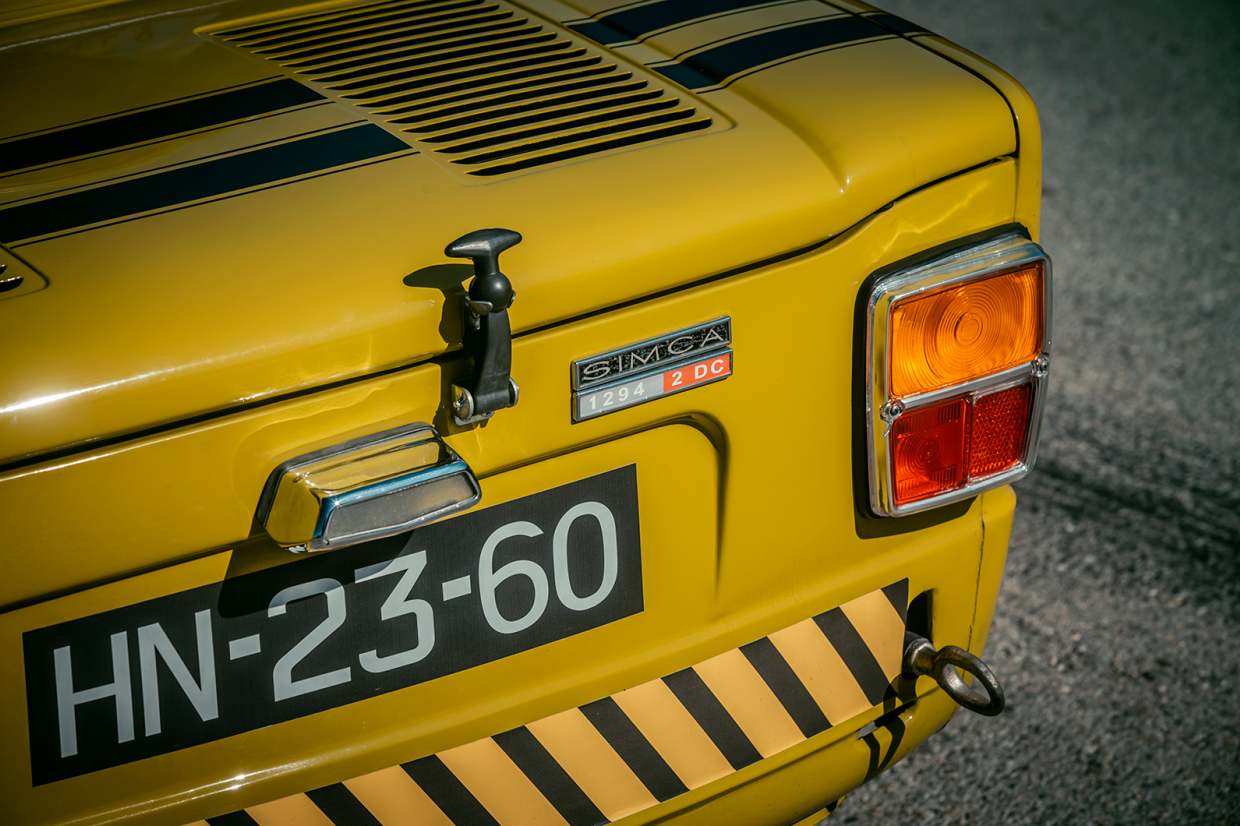 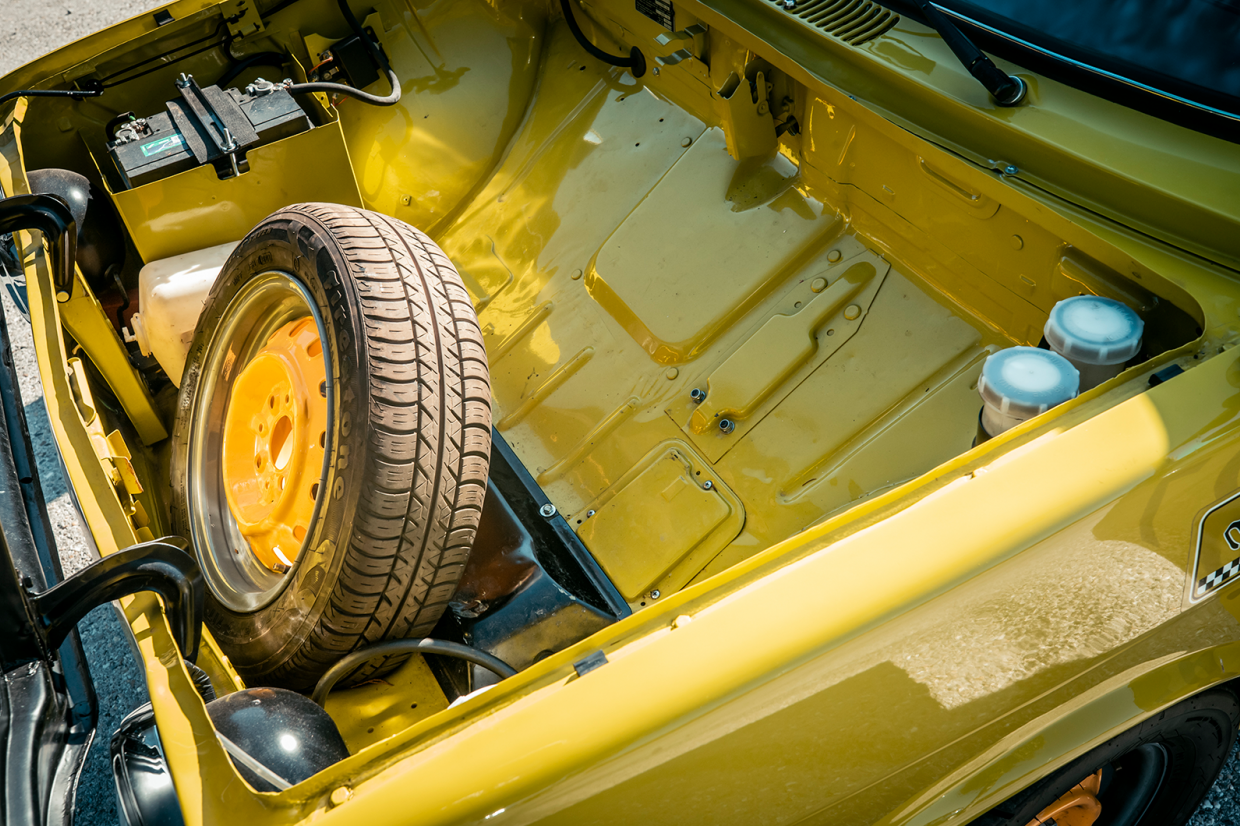 “I decided to do everything from scratch, and set about taking off all the paint – all four layers – by hand.

“I didn’t want to damage the bodyshell by having it sandblasted. It was a very long process, but worthwhile.

“By the time I was finished, the unpainted ’shell – the meat of the project – was in really good shape. It then became something of a jigsaw puzzle.”

One that had only a few missing pieces. 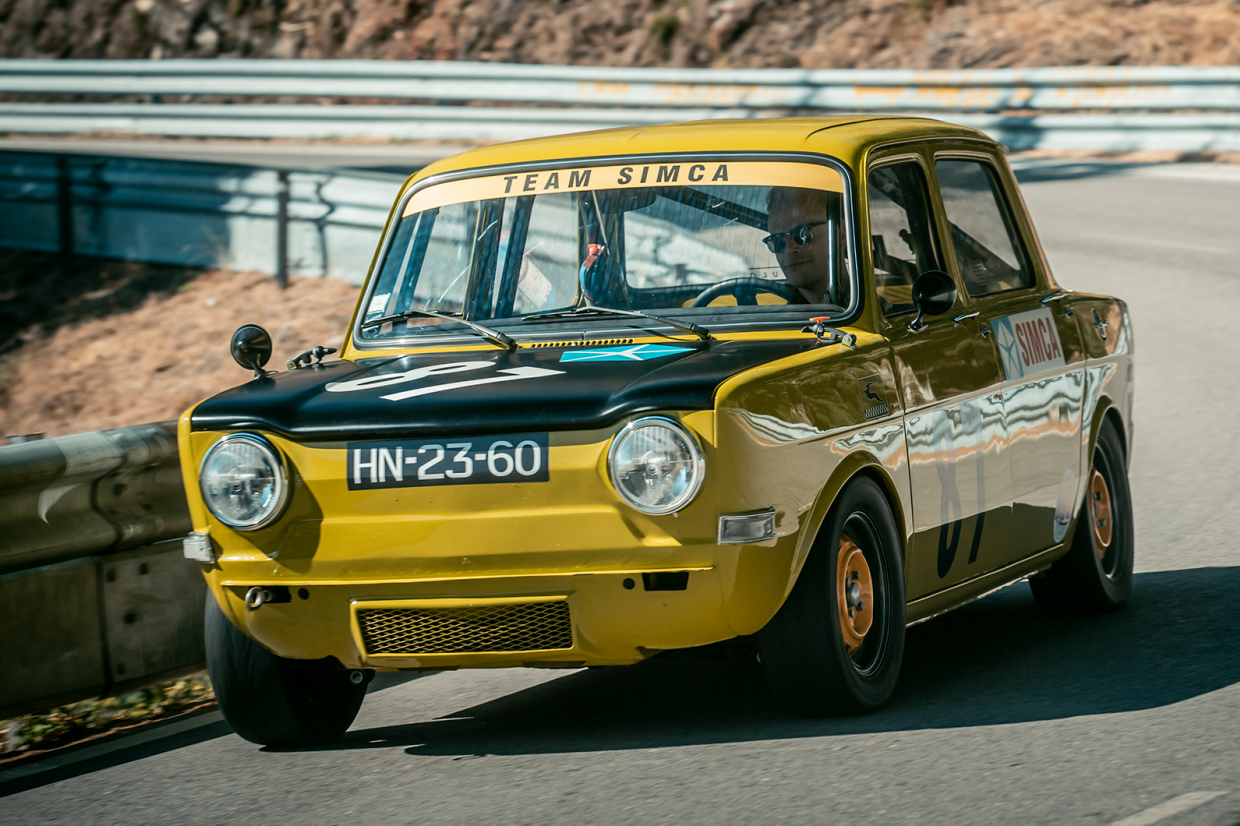 This car is now back where it belongs

“I decided at the start that I would restore the car to the same specification as when my father won his class at the Vila do Conde circuit in 1975,” Lacerda explains.

“I was immensely fortunate in that I was able to borrow a similar car from my close friend Tiago Raposo de Magalhães, which acted as a template.

“The hardest part was finding the correct components for the gearbox. That, and some bits of trim that I sourced via eBay, specialists in France and so on.

“I was keen to retain as much originality as possible, and even the fire extinguishers you see here are the ones that were on the car when it was new.

“If anything, the one thing that was most time-consuming was replicating the decals. After a year or so I had one big kit to put together.” 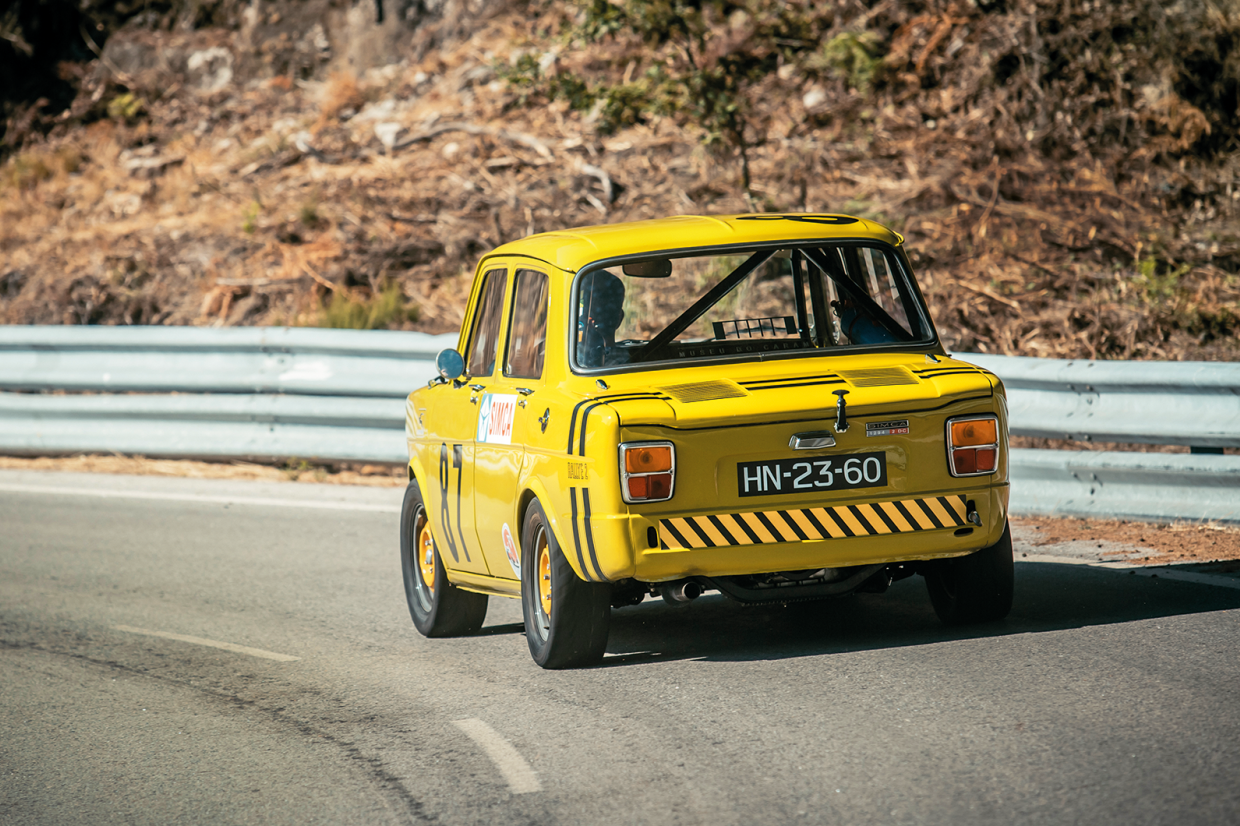 Following a respray, a further year was spent assembling the Simca, the only deviation from the script being the addition of a few engine tweaks.

A hotter cam and the Webers in place of the original Solex set-up resulted in, “A little more power and an extra 1500rpm or so.”

The target for showcasing the newly restored Simca was the 2011 Caramulo Motorfestival, its first motorsport outing of any kind since the 1985 Camelias Rally.

“I completed all the work barely a week beforehand and was able to do only a little testing,” Lacerda recalls. “There were a few teething problems, including the distributor timing, but not much. I drove it on the hillclimb and it was a very special moment.” 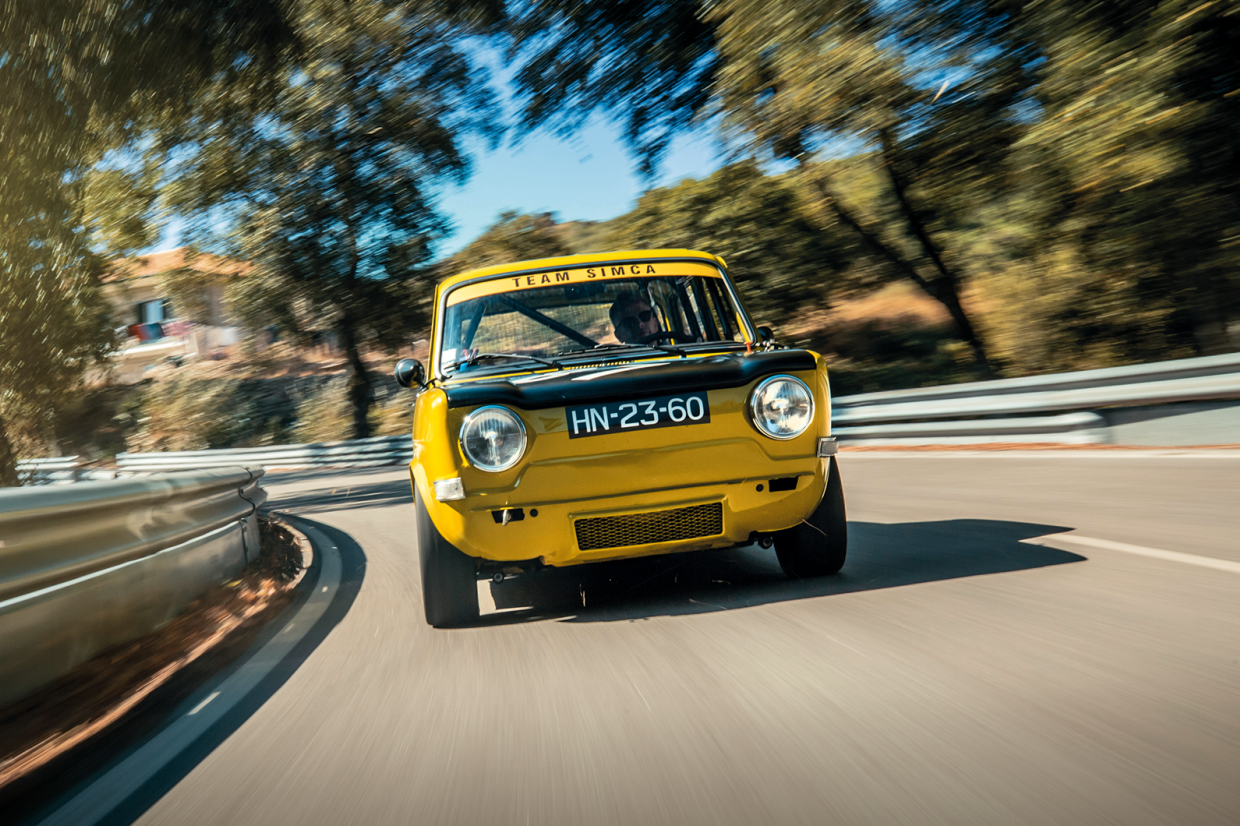 Unsurprisingly, this one is a keeper

Lacerda owns several interesting cars, and has access to several more, but the Simca is predictably his favourite.

“It is very special, obviously, because of the connection to my father. That, and for the effort I put into the restoration.

“I am fortunate in that my wife Cecilia is also passionate about motor racing and loves the Simca, so it isn’t just my car. I will never sell it. The car belongs here in Caramulo. It never should have left.”

Thanks to Adelino Dinis and Museu do Caramulo