Simca 936: the French Mini that never was 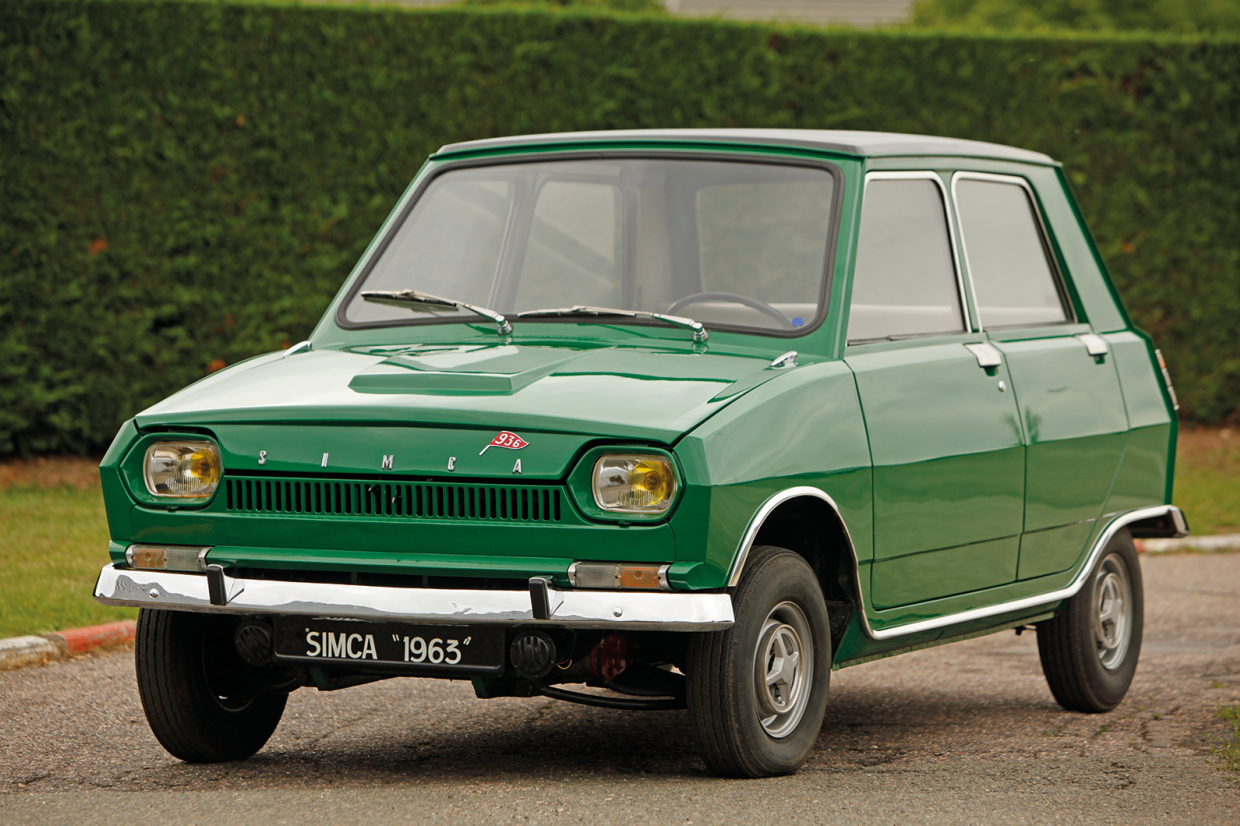 “Does this thing have an engine, or is there a slot where you insert a hamster or something?”

Photographer Tony Baker is not especially impressed, it has to be said, by the boxy little bullfrog of a prototype sitting outside the Simca museum in Poissy.

His reaction is easy to understand: Project 936 – also known as ‘Isabelle’ – is almost a caricature, like a child’s drawing of a car only in 3D full scale.

But context is everything. This was a one-off exercise in thinking aloud, and it dates back to the first half of the 1960s when it was built by hand, almost as a personal venture, under the direction of the head of Simca’s styling department, Roger Dumas. It was not a finished, production-ready proposal. 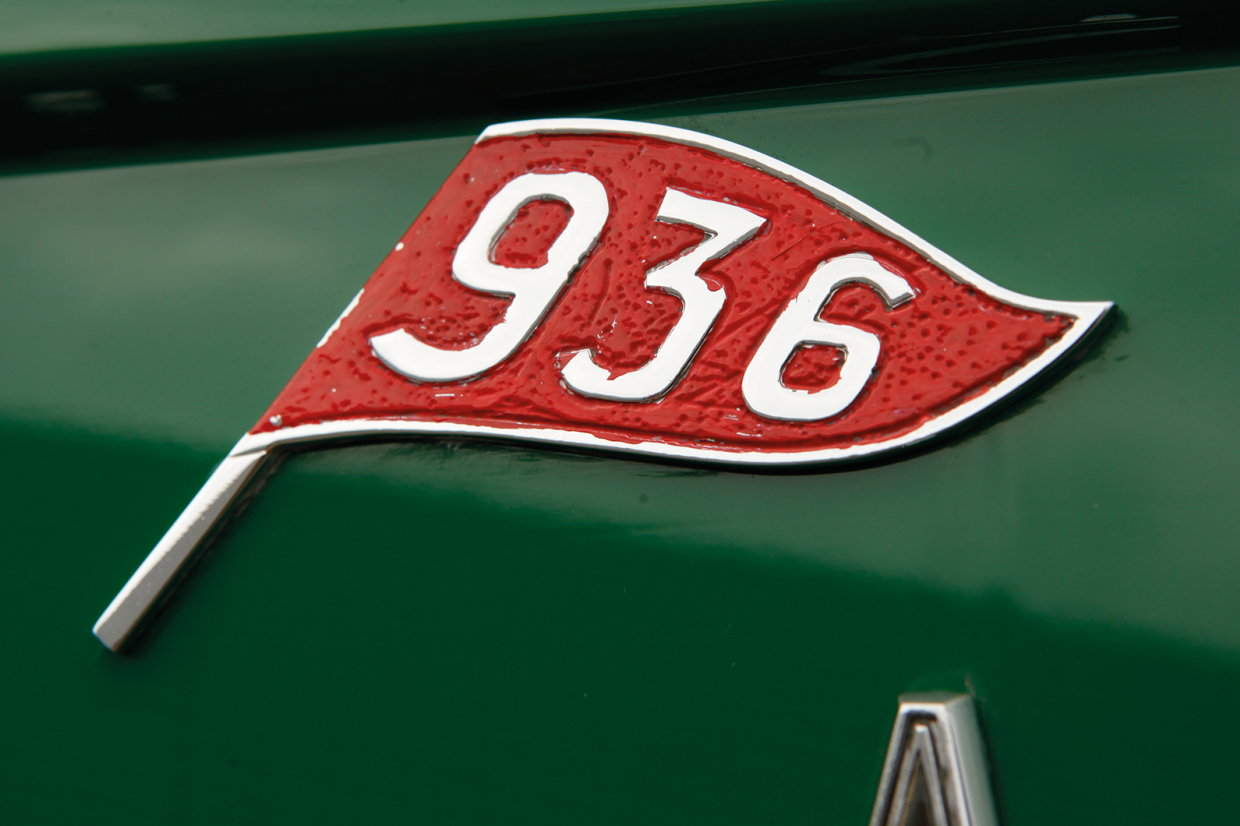 The Simca 936 had the nickname ‘Isabelle’

Equally, it was conceived at a time – roughly 1963-’64 – when the French were happy for the styling of their cars to put function ahead of aesthetics.

Much more to the point is the fact that the transverse-engined, front-wheel-drive 936 represents an early and intelligent look at building a better Mini – within the same modestly sized envelope, and with the advantage over the BMC car of having four doors.

Start with the dimensions. With a length of 10ft 1½in, the Simca is just 1in longer than a Mini, but it has a wheelbase that’s more than 2½in greater, at 6ft 10¾in.

At the same time it is approximately 3in wider and 2½in taller. All of this suggests the potential for packaging at least as good as that of the Mini, while the wide-track stance of the car, with front and rear tracks wider by 3½in and 2½in respectively, holds the promise of excellent stability on the road. 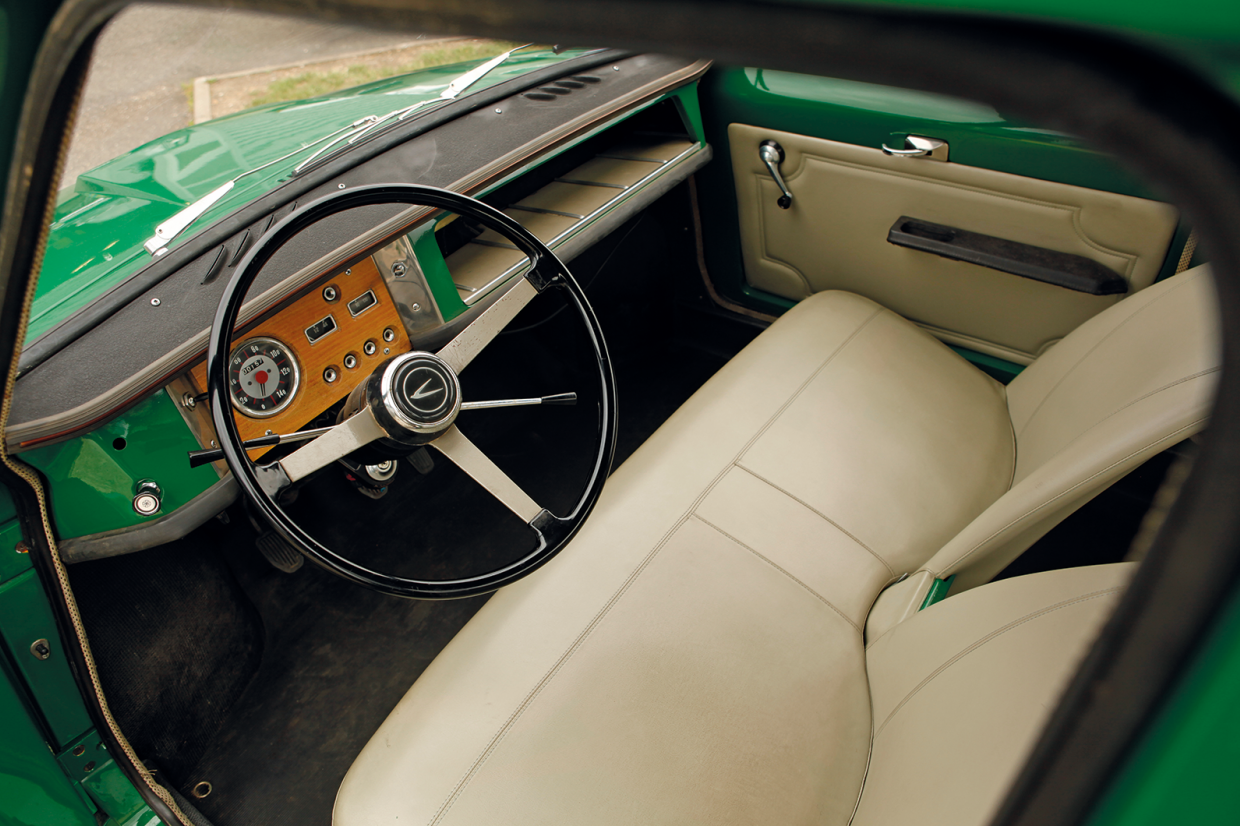 Outside are bolt-on front wings, and shades of the R5 in its styling, while inside the bench seat has individual backrests, and there is a large open glovebox in the simple dash

The priorities of the design were clearly outlined, says former Simca engineer André Sance: “The Mini was the inspiration, but among other things the object was to make it a four-door, because the French weren’t too keen on two-door cars.

“Beyond that, everything was done for maximum space efficiency – that was the number one concern. Just as with the Simca 1000, it was a car that was only small from the outside. It was very well conceived from the point of space-utilisation. Everything had been thought of in terms of maximum internal room.”

Although there are orthodox winding windows – no Mini or R4 sliders here – the solutions chosen are otherwise creatively unconventional. 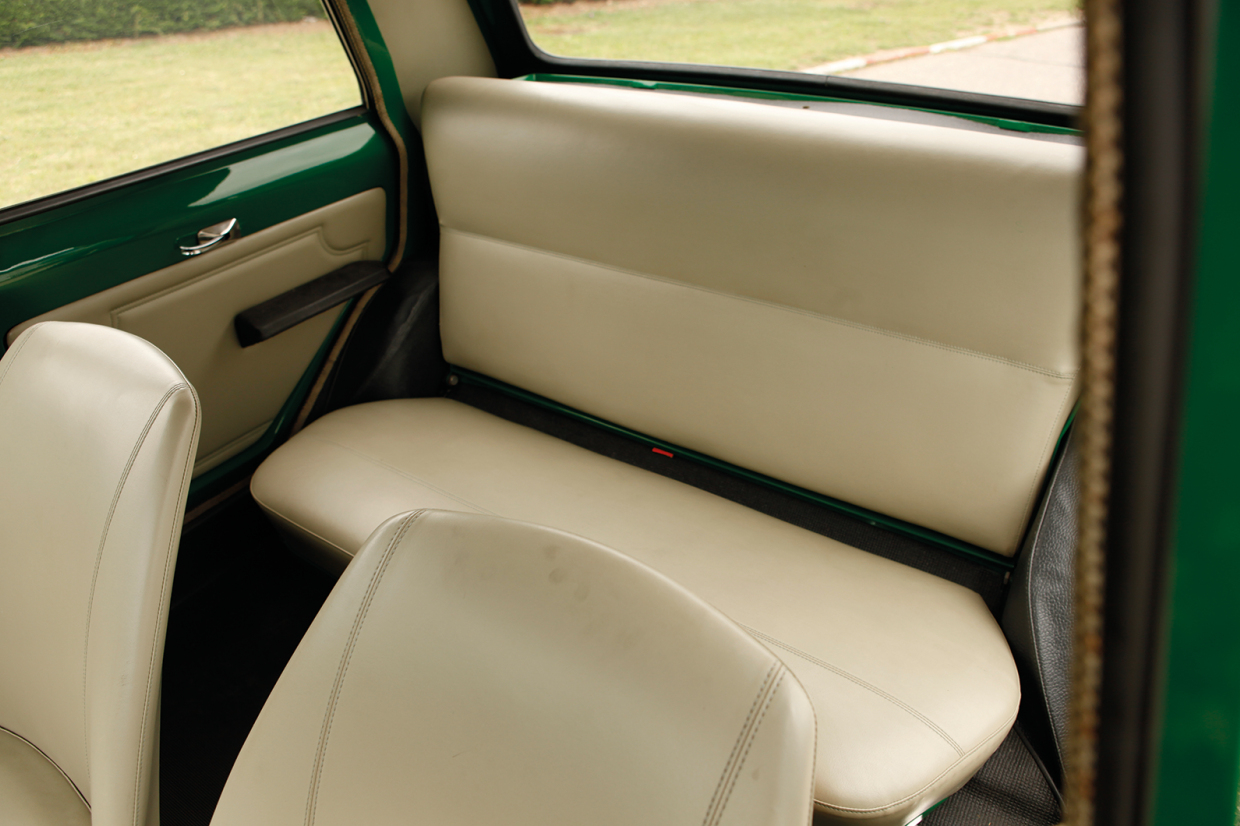 Not least the bench seat at the front, with separate backrests, the seat serving two purposes by being mounted on a traverse that braces the body.

Thin chairs add to internal room, and while there is a flat floor at the front, the rear has footwells so rear passengers can gain extra legroom by tucking their feet under the front bench.

A foot parking brake is an oddity, but again saves space; with the bench there isn’t much of a place for a regular handbrake anyway, and for the same reason the gearchange is actuated by a delicate little column lever. 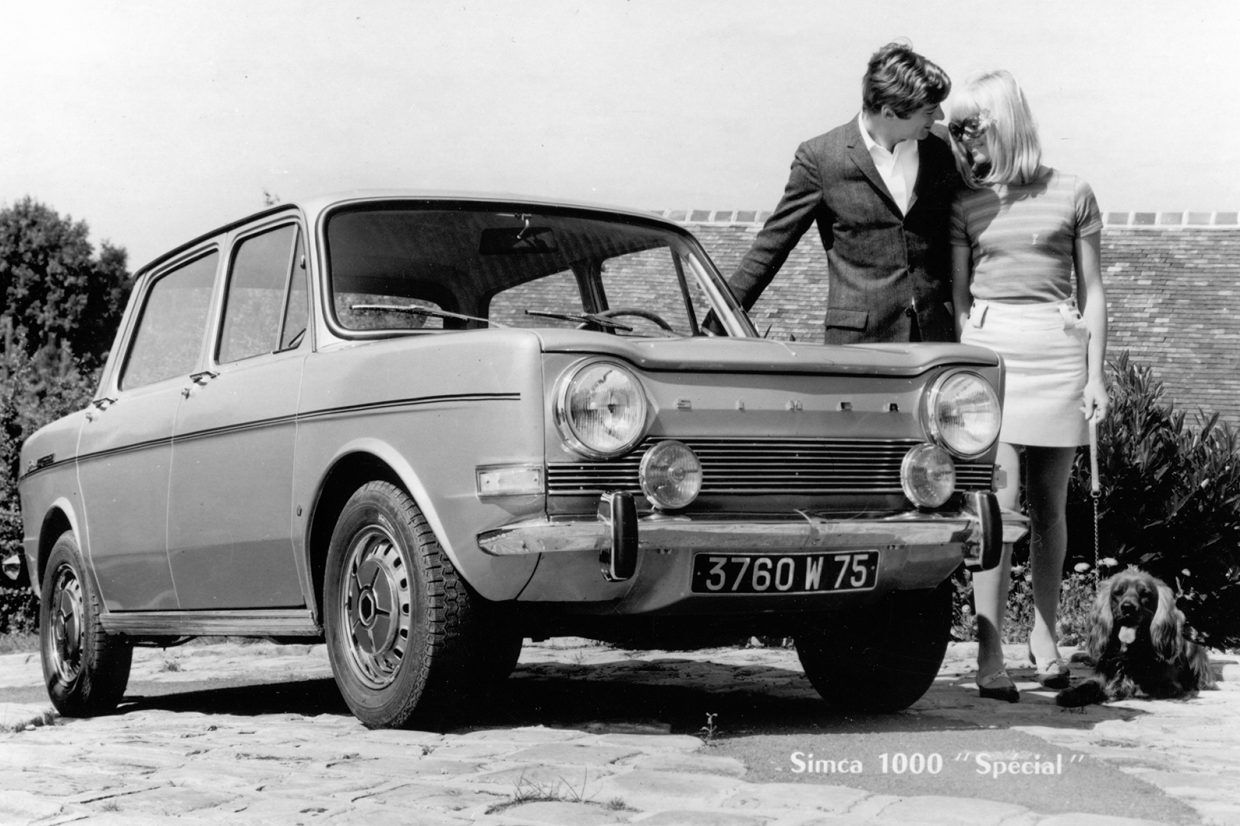 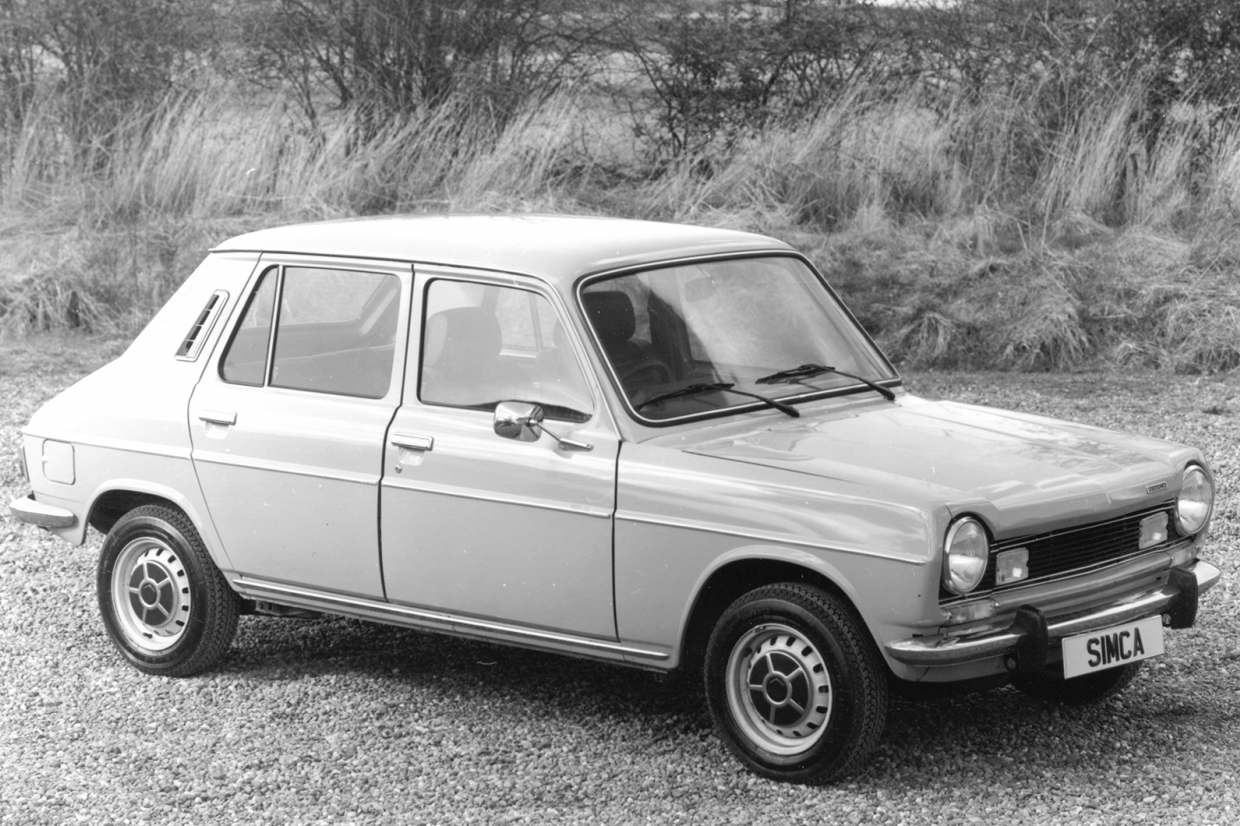 A rear engine made the Simca 1000 cheaper to build, but profits were slim (left); the FWD 1100 hatch was a good use of funds – and a big success for Simca

There really is a huge amount of space – as much as in a Simca 1100, claims Sance – with the added versatility of a fold-flat rear seat.

There’s also a good-sized boot. Bottom-hinged, as on the Mini, the lid also has a Mini-like hinged numberplate, so it can be left down to accommodate longer loads.

A further bonus is that the flat-floored boot is unencumbered by a spare, this being slung underneath in a cradle – a typically French practice.

The trade-off for all of this is that the drivetrain is crammed into a small space. “It was particularly noticeable under the bonnet, where there wasn’t much room,” says Sance. “Everyone said they should have given the engine compartment a bit more space.” 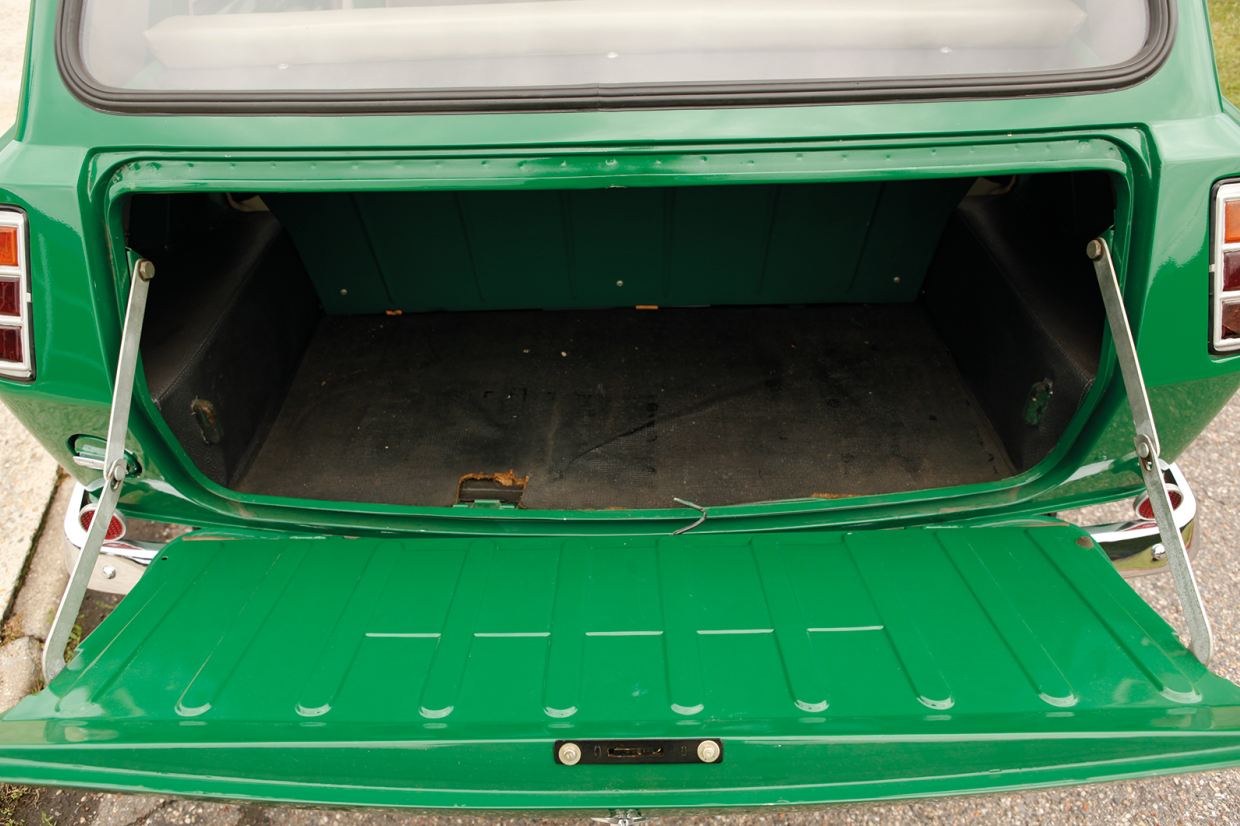 There is a Mini-style drop-down lid to the boot

Turning to the mechanicals, there is no real surprise to find an alloy-head 944cc Simca 1000 engine mounted transversely, in conjunction with an end-on gearbox.

This is not the regular Simca ‘Mille’ transmission, however, but the three-speed semi-automatic Ferodo set-up that was available as an option.

“You mustn’t forget that the starting point was to create a city car – not a car to go off on holiday in, five-up with a load of luggage,” comments Sance.

The rest of the running gear is pretty much as would later be found on the Simca 1100 – the conceptions of the two cars date from roughly the same period, with the 1100 spec having been largely established by the summer of 1963. Thus there are longitudinal torsion bars at the front, in conjunction with a lower wishbone formed of a pressed rear arm and a tubular front arm, and with a tall hub carrier running up to the top arm.

At the rear, meanwhile, there are trailing arms, transverse torsion bars and angled telescopics – the sort of space-saving arrangement later used to such good effect on the Peugeot 205. 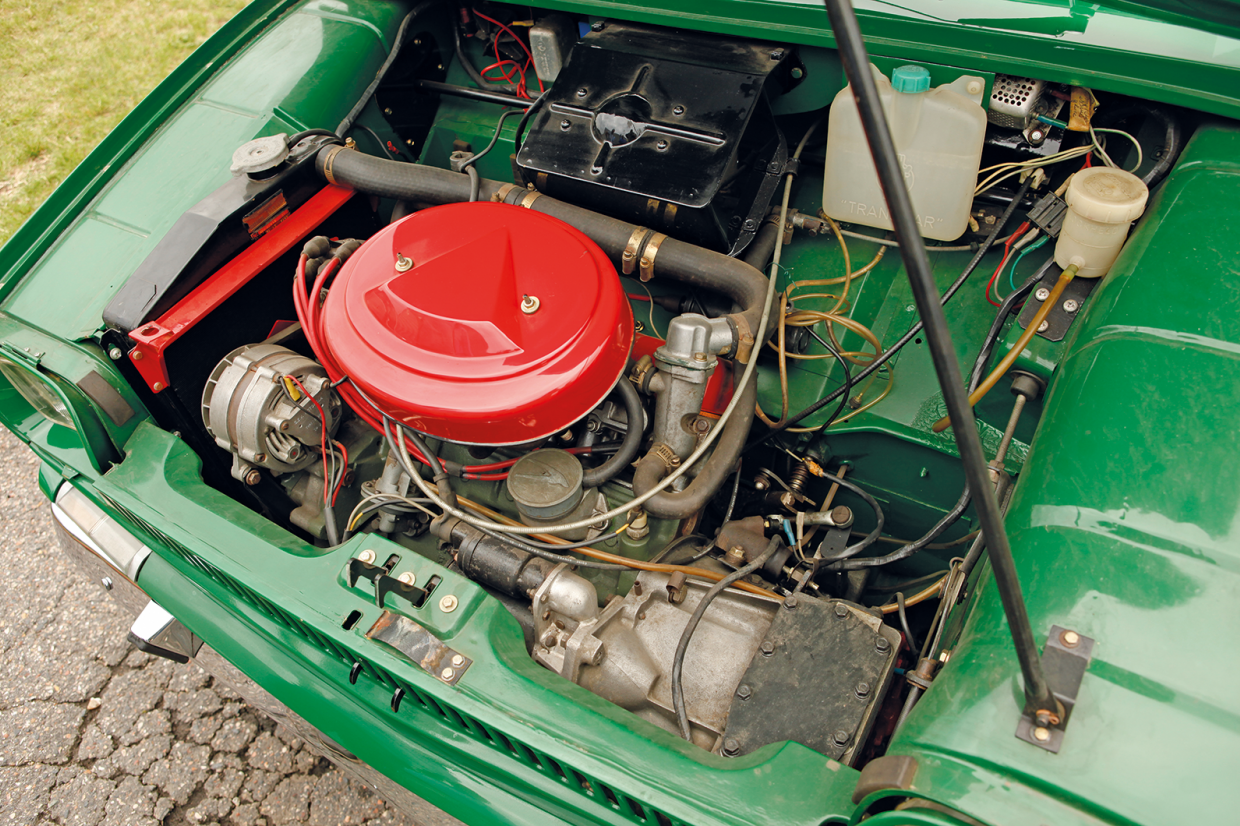 The Simca’s engine has a side radiator, as in the Mini, but an end-on gearbox

Intelligent packaging, then, and straightforward mechanicals: all that was needed to wrap things up was a style that had the perky functionality of the Mini.

Here, whatever one may say about the tastes of the French, it has to be admitted that the 936 missed the target.

Mini-sized 10in wheels and a tall body are not a good starting point, but the sharp-edged lines, droopy bonnet and bland nose do the concept no favours.

Quite likely the car never had any input from Simca’s Italian styling supremo, Mario Revelli de Beaumont, who retired in 1963, and maybe Dumas was more engineer-designer than stylist.

Whatever the explanation, there is no reason to believe that the looks would not have been worked upon, had the project proceeded. 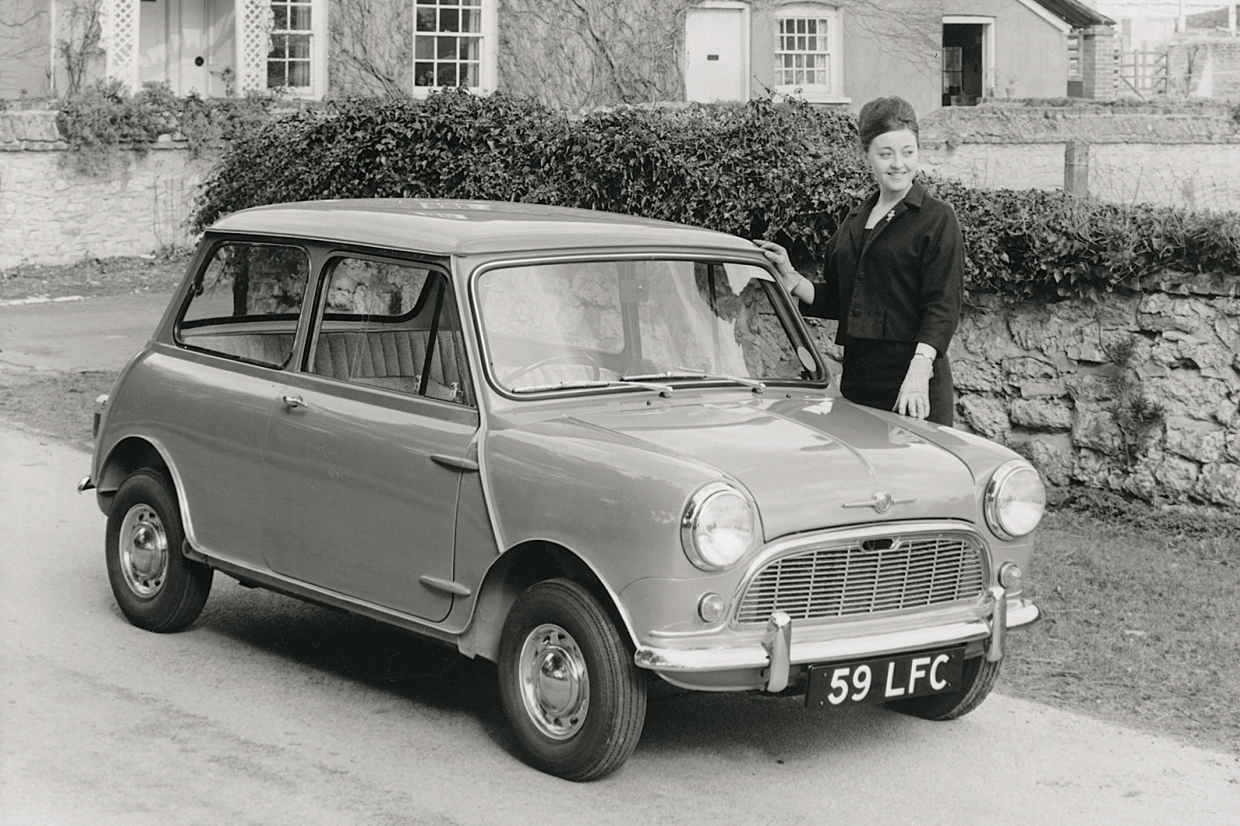 The Mini was the target of the Simca 936 project

Why did it not go forward? There are many possible explanations.

The first is quite simply that Chrysler, as the majority shareholder in Simca, had no interest in producing a tinpot small car – even if that is what consumers wanted.

After all, Georges Hérail, Simca’s French chief, was already having his work cut out trying to persuade Chrysler to let him go ahead with the Simca 1100 – they wanted something bigger and more Americanised, and certainly not front-wheel drive.

He eventually won that battle, but probably felt disinclined to fight for another small front-drive model.

There was also the matter of the likely cost of the 936, when margins were already slim on the 1000, and then there was the question of Simca’s limited engineering resources. 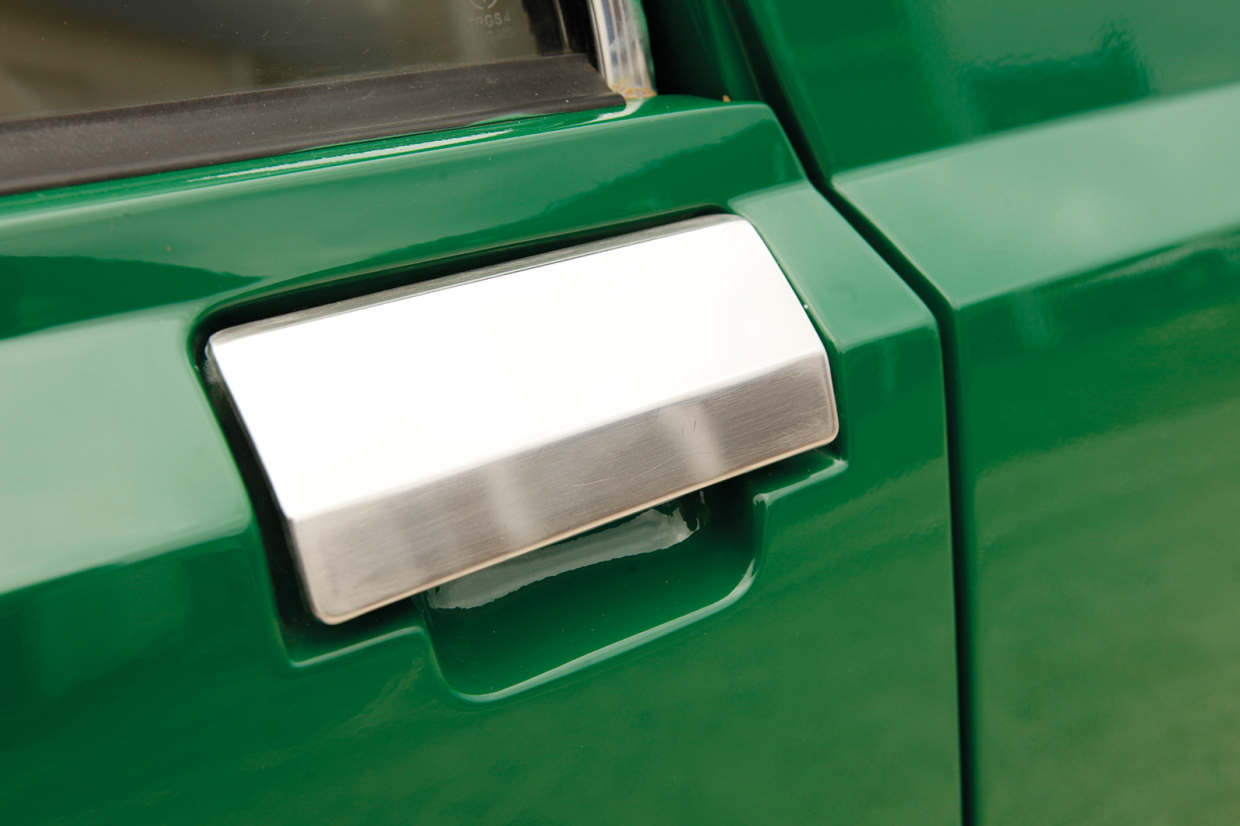 “The 936 would have cost more to make than the Simca 1000 – or at least that’s what they said – and the latter was not an expensive car to make,” says Sance.

“I’m also sure that some things were not practical in production terms, if you were going to be churning out 1000 cars a day.

“But essentially my supposition is that Simca was not capable of developing two new models at the same time. The Design Office was small, so a choice had to be made.”

There also seems to have been a feeling that the car was a bit too much one man’s wildcat project – the 936 was known as ‘the Dumas car’ within Simca, after all.

“I think it was done a bit to one side and that hadn’t been appreciated, so they told Dumas to stop,” says Jean-Claude Fredoux, another former Simca engineer. 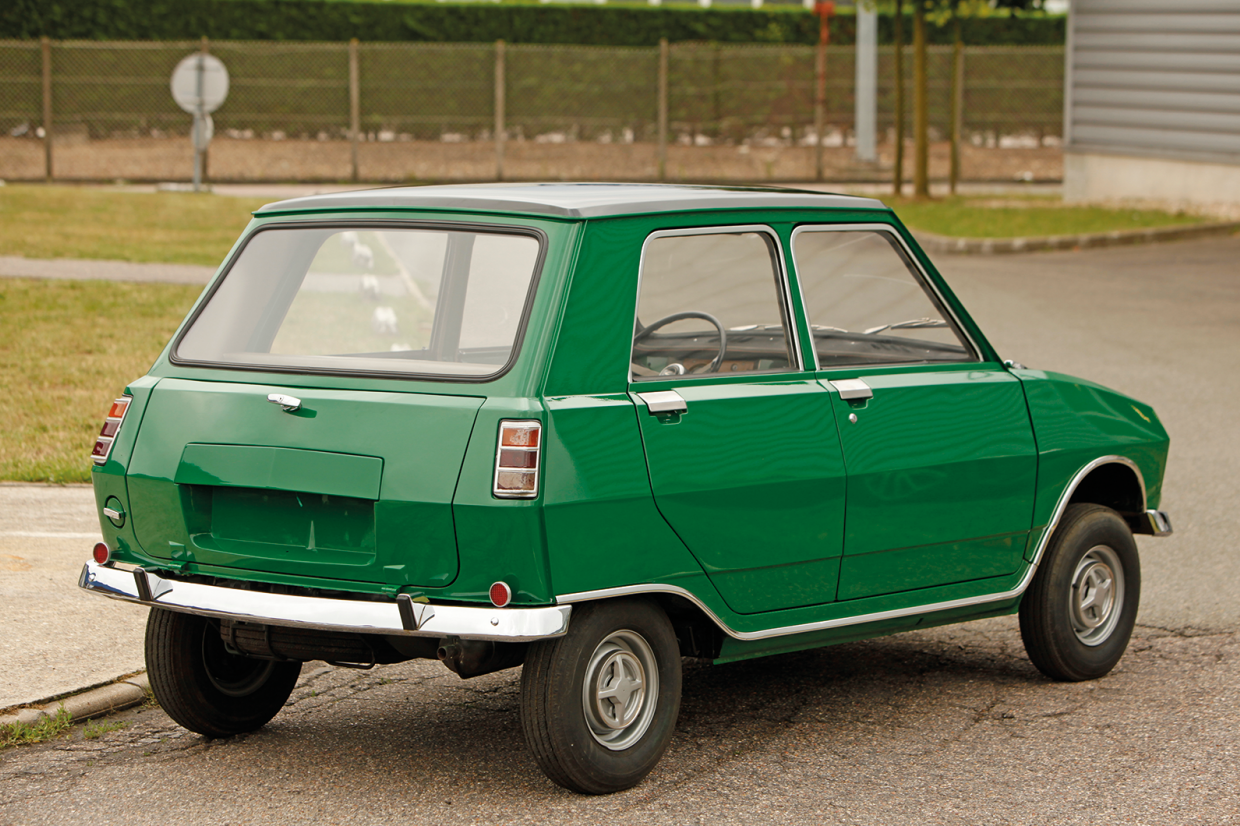 The resemblance to the Mini is clear, with external seams and trim around the wheelarches

However understandable, it’s a shame that the 936 was never developed any further, and was left to gather dust at the company’s Mortefontaine test facility.

The Simca 1000 ended up as an embarrassing relic, limping on until 1978, and was never replaced.

Had the basic 936 concept been refined and made easier on the eye, Simca could have had a chic, Mini-rivalling city car, compactly dimensioned yet spacious – and in the showrooms well ahead of Renault with its R5 or Peugeot with its 104.

Instead, the Americans chose to invest in the Chrysler 180, one of the most grimly awful failures in the history of the French motor industry.

Perhaps, though, Roger Dumas had the last laugh. One of my Simca contacts tells me that Dumas moved to Renault shortly afterwards, taking his plans for the 936 with him.

Did the jilted Isabelle help shape the massively successful R5? It would be nice to know more…

Morris vs Simca: Who says racy tintops were an ’80s thing? 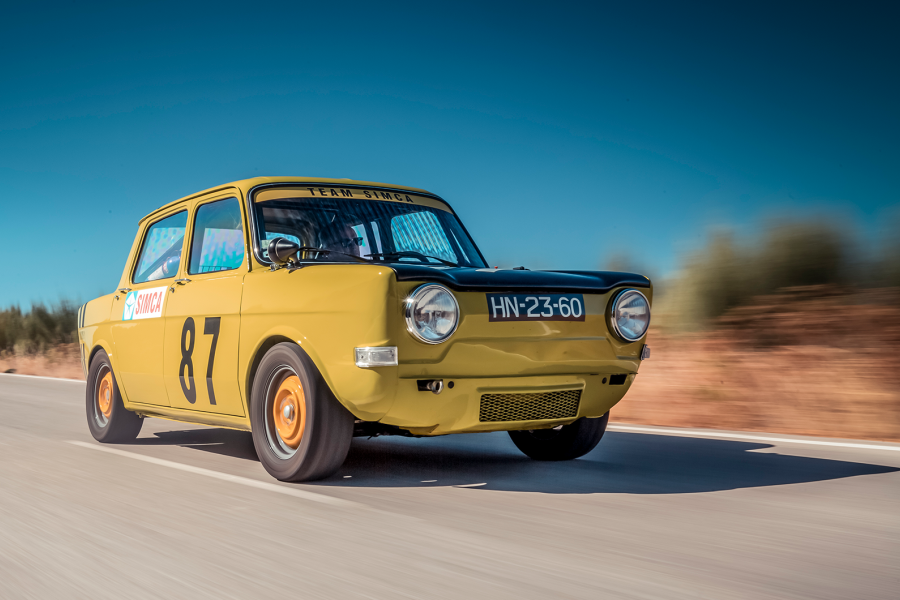