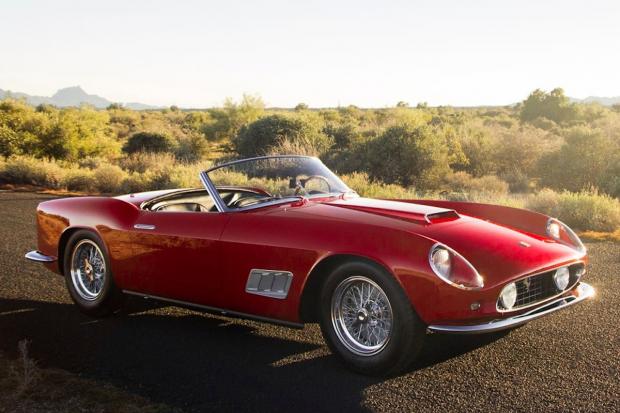 With the classic car market surfing a huge wave at the moment, the annual Scottsdale auction extravaganza surpassed all expectations in rewriting the record books.

Top-seller over the course of a frenzied week of sales was the $8.8million raised by RM for a 1958 Ferrari 250GT California Spider long-wheelbase.

The Canadian auction house raised a total of $45million over two days and a sale rate of over 85% and 10 cars topping the million dollar mark.

As is becoming traditional at RM, a couple of fascinating 'weirdoes' also made big money including a 1960 DKW Schellaster Kastenwagen accruing $60k and a host of bubble cars punching above their weight if not reaching the dizzy heights of the Weiner collection sale last year.

Gooding & Co also put in a stellar performance raising just shy of $50million and breaking 11 auction records in selling 110 of its 117 lots.

Remarkably, six of them topped $2million and 13 breached the $1million barrier.

Top US car came with the $2m paid for a 1929 Duesenberg Model J Dual Cowl Phaeton.

Although Italian cars dominated the million buck list, three Mercedes-Benz 300SL Gullwings also earned the accolade. The most eye-opening result was the $500,000 more paid for a barnfind than either of the mint, restored cars.

Other record-breakers included the $473k paid for a Ferrari Dino, the $176k shelled out on an Alfa Romeo Montreal and the jaw-dropping $1.8m accrued by a 1955 Lancia Aurelia B24S Spider America.

Although it couldn't compete with Gooding or RM, Bonhams will have taken heart from a fine showing on only its third Arizona outing, with good but sane prices for most of its lots and quadrupling its year one total.

Priciest classic was the Touring-bodied 1951 Ferrari 212 Export at $3.19million. With its last owner since 1969, the car has original bodywork and matching numbers powertrain.

That was followed by the delectable 1931 Alfa Romeo 6C 1750 Supercharged Gran Sport Spider at $3million.

Most interesting car was possibly the restored Intermeccanica Omega, one of just 33 built, which made $73,700.

Barnfinds and restoration projects continued to defy logic, however, including a battered 1965 Porsche 911 ($116k) and a similarly worn 1950 Jaguar XK120 Roadster, but with rare Glaspar hard-top ($72k).

Bonhams also had a couple of big-selling Mercs including the obligatory Gullwing ($1.078million) and a 1936 500K Sports Phaeton that has been in one-family ownership since 1951 ($1.43million).

This report covers only the RM, Gooding & Co and Bonhams auctions, a full report will follow on the Barrett-Jackson and Russo and Steele mega-sales.