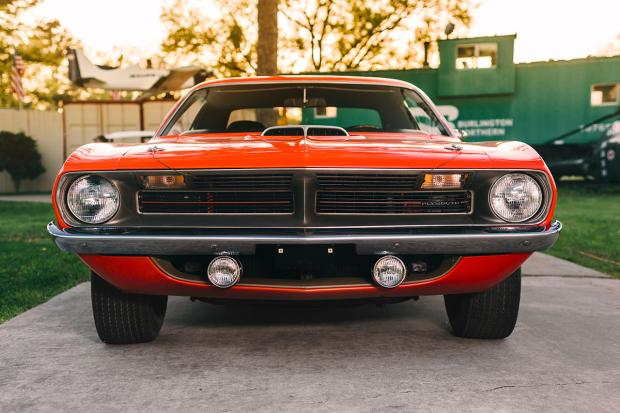 A 1970 Plymouth Hemi Cuda with only 81 miles on the clock – thought to be the lowest mileage example in existence – has come onto the market in the US. The car is due to cross the block at Mecum’s Indianapolis sale from 12-17 May, and is expected to fetch between $600-800,000.

The Cuda’s incredible history can be traced back to 1970, when it was bought new by Bill Reardon of Clarksburg, West Virginia – a pensioner who decided to buy his dream car at the age of 62. It was one of just 10 examples built that year and was finished in Tor Red with a black interior. However, instead of pressing the car into daily service, Reardon began modifying it for the drag strip, including replacing the carburettors, exhaust system, rear wheels, tyres and dampers with performance upgrades.

With the original components safely stored away, Reardon took the Cuda racing, clocking up 30 high-speed runs at his local drag strip before passing away the following season. The sub-11 second car went unused until his widow died in 1977, when his son sold the car – plus all the original components – to Marvin Dillion. Dillion returned the car to its original specification when it was showing just 42 miles on the clock, and went on to drive it less than one mile during 16 years of ownership.

Three more careful owners followed, collectively contributing just 19 miles to the Cuda’s odometer. Eventually, the car found its way to Hemi specialist John Arruza, who set about returning the car to a roadworthy condition. By the time he’d finished tuning up the engine, it had been driven for an incredible 81 miles.

All the remains to be seen is whether its next owner is able to resist the temptation of the Hemi’s thundering 425bhp.