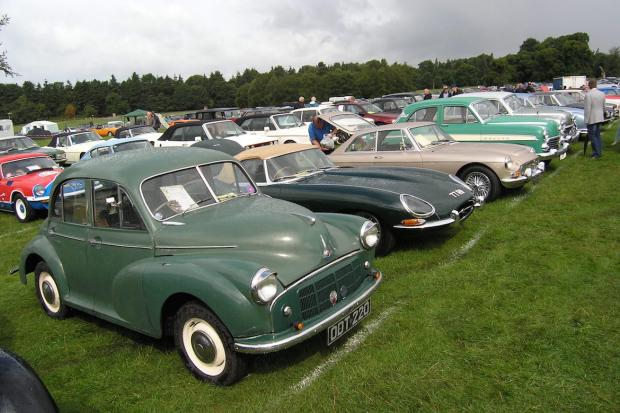 “It’s a period colour – one of two metallics that were offered on the C,” explained Warwood. “It’s a work in progress. I’ve had the engine out so that I could rebuild the gearbox. Since then, all the underside has been done. The interior is original, as is most of the paintwork.”

Nearby was the dazzling Bond Bug 700ES – fresh from a six-year restoration – of father and son farmers Jim and Dave Williams from Chester. “We had to fit a new speedo,” said Dave, “and it’s done only 61 miles. There’s a lot of things that you can’t get, so we make them, such as the pedalbox in stainless and bits of the chassis.” Jim added: “The engine came out of a fire pump that we found in a scrapyard, with only 105 hours on it.”

Clubs weren’t put off by the poor weather, either. A fantastic combined display from the Vauxhall Viva Owners’ Club and the Droop Snoot Group spanned every type of Viva – including an HB ‘Pencil’ GT and an HC estate – plus two HP Firenzas, a Chevette HS and an HSR. Pride of place (second from right) went to Colin Burton’s unique 1987 Quicksilver styling exercise: “It’s on a based on a 1.8 Astra GTE and was done as part of the 25th-anniversary celebrations of the Ellesmere Port plant. I’d wanted to own it ever since I saw it at the Motor Show and got the chance to buy it about four years ago.”

“For once, the FFs outnumber the Interceptors by four to one,” enthused Adrian Howells of the Jensen Owners’ Club, “so they shouldn’t have any problems getting off the muddy field.” The quartet, all Mk2s, belonged to Steve Makin, John Carrier, Alan Jones (the three cars above) and Helen Newby, who’d driven hers down from Yorkshire.

Across the aisle, the Saab Owners’ Club stand included the immaculate 1972 95 estate of club stalwart Chris Boffey, on his 20th year at the event, alongside the gorgeous 1965 96 that Graham Barr bought about 10 years ago. “All it’s needed is mechanical work,” he said, “because the bodywork is mostly original, as is the interior. We’ve been to the Goodwood Revival three times and to various Saab nationals over the years.”

Here are some of our other highlights from around the park:

Lovely, highly original Spitfire 4 is one of the oldest known to survive. As the Triumph Sporting Owners’ Club info board explained ’22 are registered before this one but we don’t know how many survive’. It was registered on 19 April 1963.

A fantastic Commer Van Fan group featured the lovely duo-tone ’72 camper known as ‘Clarabel’, which has been in the same family for four generations, parked alongside her mate ‘Harvey the RV’. The corral also included a late-model ex-Royal Mail Dodge SpaceVan. The club’s motto – Loitering without tents – raised lots of smiles.

Tatton regular Paul Wilson took the immaculate Granadarot metallic 1975 BMW 2002 that he bought in ’93 but didn’t set about the restoration proper until about six years ago.

When was the last time you saw any Datsun 120Y, let alone one in mint condition?

And if you were in the market for a classic sports car, this TVR 350i looked excellent value, at £6500 – ‘offers welcome’.

The wildest Jaguar E-type: inside the September 2022 issue of Classic & Sports Car