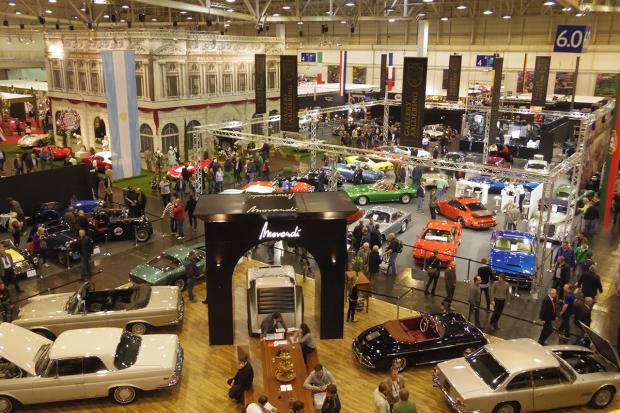 A celebration of all things Mille Miglia headlined this year’s enormous Techno Classica in Essen, with a glittering array of the race’s most famous models shown on event organiser SIHA’s stand, which as in previous years featured a towering faux-stone edifice.

The event, which took place from 6-10 April, gathered an incredible selection of racers for its central display, including a Fantuzzi-bodied Maserati 300S campaigned in period by Benoit Musy, Juan Manuel Fangio’s Mercedes-Benz 300SLR and a Porsche 550 Spyder.

There was also strong support from manufacturers, with Audi, Mercedes-Benz, Porsche, BMW and Skoda all displaying cars from their heritage divisions, with numbers bolstered by local marque clubs.

Highlights included Audi’s Group S rally prototype, which enjoyed a rare outing from the firm’s Ingolstadt museum. The mid-engined racer was a product of the Group B rally era, destined to compete in the stillborn Group S. The Audi didn’t even make it that far – after the lid was blown off the secret project when a photographer spotted the car being tested by Walter Röhrl, all but one were dismantled under the supervision of Dr Ferdinand Piëch. The 500bhp+ racer drew plenty of attention in the opening days of the show.

Porsche celebrated the 40th anniversary of the 924 by displaying an early development car. The striking prototype had been restored by Porsche Classic in 2007.

Volkswagen’s museum, Autostadt, also laid on an impressive show, delving into the back catalogue of  its subsidiary divisions, including Bentley and Bugatti. A stunning Bentley 3-Litre sat alongside a Bugatti Type 35 and Lamborghini Murcielago, while a number of commercial vehicles also drew admiring glances.

A number of cars from the firm’s competition stable were also included, such as a 130 RS and incredibly rare 1100 OHC.

Elsewhere, Mercedes-Benz’ expansive stand celebrated the firm’s back catalogue of roadsters – a similar display to that shown at Stuttgart earlier in the year. A 1952 300SL Carrera Panamericana  proved one of the biggest draws.

The opposite side of the hall, meanwhile, was dominated by a 1985 Mercedes-Benz tractor from the Unimog-Club Gaggenau e.V.

Away from the larger manufacturer stands were a host of gems to be discovered on dealer stands, many of which outshone the larger displays. The futuristic and striking teardrop-shaped Pininfarina X was a highlight for many, including one lucky visitor who managed to purchase the 1960 car while at the show.

A rare opportunity to get up close with an MGB Coune Berlinette was offered by dealer Classics 2 Drive, while an imposing yet beautiful 1925 Hispano-Suiza 8-litre Boulogne stole the limelight on the Pueche stand.

A 1953 Hudson Italia prototype that was deemed Best Preserved Post-War Car at Villa d’Este in 2014 was offered by Marreyt Classics for €575,000.

Club stands are always a highlight at Essen, and this year was no different. Vehicles ranged from the everyday to the truly spectacular, with Volkswagen 412s rubbing shoulders with a 1956 Fiat 1100 Boano, star of the Fiat-Raritanen Club’s display. The rarity was shown alongside a 1954 Pininfarina-styled 110TV Coupé.

The Audi Club presented one of the largest displays, but the jewel in its crown was also one of the smallest: a 1973 NSU Thurner RS. Just 121 examples of the NSU TT-based glassfibre sports car were ever built, making it one of the rarest cars in the clubs section.

Not all the club cars were quite so smart, however. A Unimog 401 looked as if it had just been pulled from a barn, until a passing club member explained: It’s been completely overhauled mechanically and is 100% operational. We have around 300 examples in the club.”

The show also offered the chance for one car – a Mk1 Volkswagen Scirocco – to be reunited with its first owner. “He was absolutely delighted to see it again,” said owner Holger Röttgers. “He’d ordered the Scirocco new in 1976 and carried out a number of small modifications, all of which have been kept in the name of authenticity”. The car was part of a three-car display laid on by Scirocco Original IG.