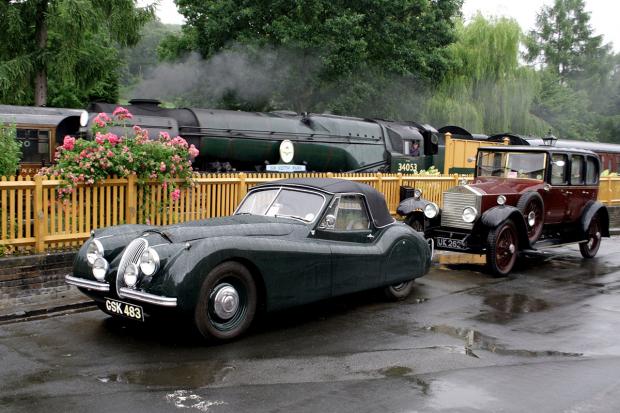 A delightful mix of classics and steam greeted attendees of the Severn Valley Railway's Classic Day on 26 July, which saw gatherings of chrome-laden tin at five of the heritage railway's stations. Ian Seabrook reports.

The timetable allowed plenty of time to stop off and enjoy the classic delights at each station, with cars ranging from a Heinkel three-wheeler to a 1925 Rolls-Royce 20HP saloon.

Classics even filled the concourse of the Kidderminster station, with a gathering of Minis from the first three years of production creating quite a stir. The owners of these cars certainly appreciated having a roof over their heads during a rather damp day.

The weather didn't put off these Midget enthusiasts

At Highley, home to the railway's marvellous Engine Room museum, there was a fine collection of early Land Rovers, including a rare Series One long-wheelbase and a very tidy Series Two owned by Randell Proctor.

Thought to be the only road legal Bedford HA pick up, with the conversion officially sanctioned and carried out by Walker Bodies

Arley station boasted some real treats, including a Jaguar XK120 Drophead Coupe and the aforementioned Rolls-Royce 20HP, both owned by Steve Copson. Other treasures were an immaculate Sunbeam-Talbot 90 and A Vincent's 1954 MG Magnette ZA – a car he has owned for some 25 years.

Upon reaching the end of the line at Bridgenorth, passengers were treated to the sight of an exceedingly rare Bedford HA pick-up as well as a great line up of traditional British classics – from Triumph Spitfire to Morris Minor Traveller. Particularly eye-catching was the Hillman Minx IIIC belonging to Roy and Ann Lewis.

Bright and cheery Hillman Minx IIIC was in delightful condition

Triumph Spitfire and Morris Minor Traveller seen at Bewdley. Some felt the need to dress to suit

Variety was on the menu at Bewdley – Austin A40 Pick Up, Heinkel, Ford Cortina Mk1 GT, Humber Super Snipe

1950s sports saloons, with this Sunbeam-Talbot 90 and MG Magnette ZA looking ready and raring to go

Car of the day might just be this fantastic Vauxhall PA Cresta Friary estate. A riot of angles and chrome