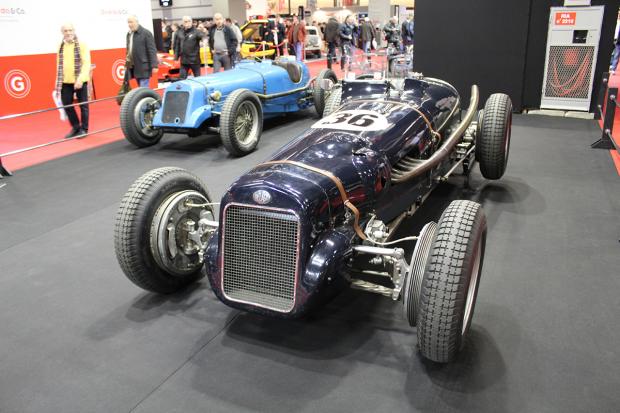 The annual season-opening classic car show in Paris is swathed in atmosphere and awash with wonderfully exotic classic cars (see Gallery), but there is an uneniable pride in homegrown cars.

This year’s event opened at the Porte de Versailles show halls on 8 February and runs until Sunday. There are special celebrations for everything from Ferrari at 100, with a mindblowing selection of F1 cars to six superb Delage pre-war racers being gathered. French tanks, Ballot and much more.

Here’s our pick of the French fancies in Paris.

This highly modified 1957 Quatre Puces, displayed complete with a pair of handcuffs hanging from the seat-rail, was built for the traffic police. It was equipped with 12-volt power and an extra battery to power the radio-telephone. Renault disapproved of the transformation, however, and just 75 of the cars were created.

This sleek Figoni et Falaschi-bodied beauty from 1936 is a short-chassis competition cabriolet. It is one of just six such cars built by the French coachbuilder that year. The models were powered by either a 3.2-litre or 3.5-litre ‘competition’ straight-six engine. This car, chassis 46837, has the latter and was being sold by Artcurial with an estimate of €1.2-1.8million.

For sheer magnificence, few cars at Rétromobile could rival this imperious 1930 Delage D8S. Built for the Maharaja of Holkar, the coachwork is by Figoni and it is powered by a mightly 4060cc straight eight motor. Quite sophisticated for its day, the D8S has a four-speed gearbox and servo-assisted brakes.

The new Alpine was shown with much fanfare at Rétromobile, but it was the beginning of the story rather than the latest chapter that most charmed visitors. In 1955, the 4CV-based and Marquis-inspired A106 was the first of the lightweight rear-engined cars built for Dieppe Renault dealer Jean Rédélé. As a result Alpine was founded in June of that year and by October a car was at the Paris Salon. Just 251 of these first-generation Alpines were built between 1955 and 1959.

In one of the great tales of automotive derring-do, in 1919 Ernest Ballot and Ernest Henry took just 102 days to conceive, plan and build four 5-litre cars to take on the Indianapolis 500, victory thwarted only by the poor build quality of the American wheels. The following year ‘our’ 3/8 LC came seventh at Indy with Jean Chassagne and went on to have an impressive Grand Prix career.

This microcar is a fascinating what-might-have-been from the well-known French manufacturer of coaches. The car on display was the sole road-going prototype, clandestinely built during the war in occupied France. The lack of raw materials put the kibosh on mass manufacture and it was sold to Tom Delaney in England who, while intending to put it into production, encountered the same issues. When it came up for auction in 2012, it was snapped up by a member of the Chausson family.

One of the stand-out displays of Rétromobile 2017 was a sensational selection of Group B cars lining a walkway between two of the halls. They ranged from Peugeot T16, Audi quattro and Ford RS200 via iconic Lancia Delta S4 and 037 and on to Ferrari 308 Michelotto and Nissan 240RS. A firm favourite with the locals was the ex-Francois Chatriot Renault 5 Maxi Turbo.

One of the highlights of Rétromobile was an understated and almost tucked away display of five sensational Grand Prix Delages that have never before been seen together in public. One of the cars had come from the Mullin Automotive Museum in California - the Delage ERA, chassis number six. This bluff-fronted 1927/’37 contender was originally powered by a 1500cc supercharged motor, but that was later supplanted by a 2.1-litre ERA E-type engine.

Lükas Huni’s vast Rétromible stand was fronted by a trio of Bugattis with the third Atlantic in the midst of them. This car may not have quite the provenance of Ralph Lauren’s example (57591) or the one now in California (57374), but it is still a jaw-dropping sight. Having previously appeared at the Paris show in 2011, chassis 57473 was the car that was almost completely destroyed on a level crossing in 1955 and was restored and rebuilt over many years.

The wonderfully Art Deco cars created by Gabriel Voisin are tantalising enough in normal circumstance, but presented with one in totally original, beautifully patinated condition it is irresistible. Displayed on Christoph Grohe’s stand, this 1928 C11 Charteorum powered by a 2326cc ‘six’ was discovered on the property of a Côte d’Or farmer in 1967 and has not been touched since.