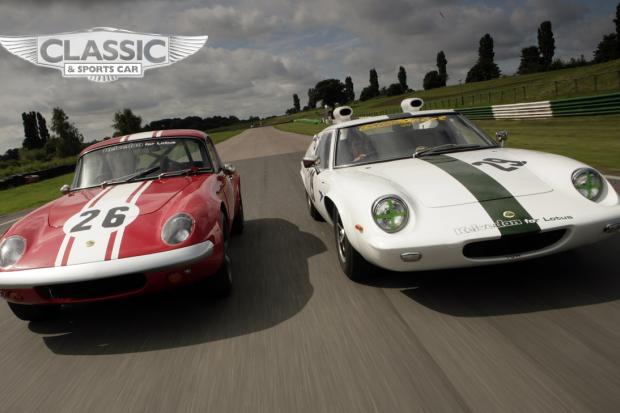 Colin Chapman didn’t do compromise, which made his decision that the 1962 Lotus 23 would be Lotus’ last dedicated, race-only small sports car quite a weighty one. The more mainstream and market-savvy idea of basing all future racers on roadgoing models would surely involve the cars in some level of compromise. Coupled to that, they had to be successful for there to be any point in the ‘win on Sunday, sell on Monday’ plan.

I hardly need tell you that Chapman and Lotus rose magnificently to the challenge, cementing their marriage of brains and lightness triumphing over brawn in the public’s mind, an image that lives on in the Elise and Exige today. With first the Elan, then the Europa, it created small-engined giant-killers, won a lot of races and sold a lot of cars off the back of their success. Lotus’ reputation wasn’t all down to F1, you know.

The Elan 26R appeared in ’64. That ‘R’ suffix stands simply for Racing – all Elans until the Plus 2 have the factory code ‘26’. Outwardly the 26R looked much like other Elans, apart from sporting recessed and fixed rather than pop-up headlamps, plus subtly flared wings to allow for bigger wheels. But that bodyshell was a lightweight single-skinned affair, bolted to a chassis that had been strengthened around the crucial suspension attachment points. Power still came from Lotus’ Ford-based twin-cam, but these were versions built by BRM or Cosworth, or a combination of the two after it was discovered that the real hot ticket was to use a BRM head on a Cosworth block. Roadgoing Elans may have felt quick with 105bhp, but regular Lotus driver John Miles proved able to beat everything in sight with a genuine 155bhp.

It was Miles – son of Bernard Miles, who built up London’s Mermaid Theatre – who drove both these cars to many successes before his promotion to Lotus’ F1 team in 1970. In 1966, with the very car you see here, prepared by the highly regarded Willment team, Miles topped the Autosport Championship after a dominant 15 wins, a feat that grows in stature when you view period photos and see what else was lined up on the grids. In races that included the final Sussex Trophy at Goodwood before it was closed, the 26R vanquished Ferraris, Porsches, Jaguars and Astons, all of which had much larger engines.

Yet Miles’ most memorable drive was at the ’66 Brands Hatch Easter meet. Leading from Bernard Unett’s Sunbeam Tiger, the Elan’s bonnet came loose and started to flap about. Miles pulled into the pits to have it removed, then set off in pursuit of Unett, passing him on the last lap to win. Racing without a bonnet clearly infringed the rules, but Unett declined to protest in honour of Miles’ incredible drive.

For 1967, Miles was given the new Lotus 47 to drive, sharing it in longer races with another future F1 driver, Jackie Oliver. Though obviously based on the Renault-engined Europa, the 47 had the 1600cc Lotus twin-cam almost five years before the road car and on Weber carbs could hit 175bhp. Mid-mounted, the engine was attached to a Hewland five-speed transaxle and bolted solidly to the car’s revised rear chassis layout for added stiffness. Its front suspension was similar to the Europa’s, but the rear end was borrowed from the Lotus 69 Formula 2 car. Disc brakes replaced the standard rear drums.

In the white and green livery of Lotus Components, Miles and Oliver drove this car, chassis No 4, to 17 wins, including the prestigious BOAC International 500 six-hour race at Silverstone. No 4 was quickly dubbed the ‘Snorkel Car’ thanks to the pair of extra air scoops peering over the roof that were not seen on other 47s.

After that fantastic season the car was sold off to make way for Lotus’ next development. Its second owner was successful Elan racer John Calvert, who made his debut in the 47 at the ’67 Boxing Day Sports Car Meet at Croft, starting with a win. Four months later, after a string of first, second and third places, things went wrong in a big way. In an accident so spectacular that a photo of it made The Sunday Times sports pages, Calvert’s car was nudged into the barriers at Copse by another 47 during the Silverstone International Trophy. Calvert was OK, but the car was a write-off. It was rebodied into Lotus 47 shell/chassis No 78 and returned to the track at Oulton Park five weeks later.

Calvert raced the car for another 18 months, but its second season in his hands was blunted by the arrival of the all-conquering Chevron B8 sports-racers that ran in the same class. In October of 1969, Calvert registered the car for road use and part-exchanged it for a Ginetta G12 with Teessider Joe Lanny. It later surfaced in ’74, when John Neal found it in a scrapyard in Northants, selling it to current owner Pat Thomas in 1981. Soon realising what he’d got hold of, Thomas contacted Calvert, who still had his meticulous history files detailing the car’s racing exploits. Other projects got in the way, but over the years Thomas, aided by friend Tony Hills, lovingly returned the car to how it was originally raced and got it back on the track two years ago.

At about the same time Thomas tripped over the ex-Willment 26R, also in need of a rebuild – one its then owner didn’t want to fund. For someone who had always wanted a real 26R, the chance to own one of the most significant proved irresistible, and to hell with the expense!

Following its early successes in Europe, the 26R had continued its winning ways in club racing with Robbie Gordon and Peter Clark in ’67 and ’68, by when it was getting a bit long in the tooth. It was then sold to a French hillclimber who crashed it on his first outing. After that, Simon Hadfield rebuilt it for historic racing but, following originality disputes with scrutineers, he sold it to a US customer. The car later returned to the UK to again be prepared for historics, but it wasn’t far into the project before the owner decided that it would be too expensive and pulled the plug. It didn’t take Thomas too long to lick the car into shape – he’s been building and racing Elans since ’75. He fitted a new, correct-spec chassis, plus an FIA-spec engine that gives 172bhp built by a former BRM engineer at Paul Fisher Engineering. The car only diverts from period fettle in a safer rollcage, drawn from the experience of seeing past accidents.

The Willment/Miles 26R’s post-restoration debut was at Oulton Park in May 2005, running in the Heritage GT Challenge. Remarkably, one of the first people to take a close look was the photographer, Gordon Dawkins, who’d been at Brands for Miles’ legendary win 39 years before. Time hasn’t diminished its abilities, either – Thomas took 12 class wins out of 14 races in 2006.

All this history, plus a value in excess of £125,000, weighs like the calming hand of a wise elder on my shoulder as I slide into the uncompromising shell of a bucket seat and notice the slightly incongruous wooden dash – in good nick, too! The prospect of 172bhp in something this small and light sounds a little daunting, but all worries are soon washed away. This well set-up 26R is remarkably easy and comfortable to drive, though you wouldn’t want to be too tall or too wide – it’s no Tardis! It is, however, one of those rare racers in which you feel happy and confident right from the off. It’s easy to see why the 26R has proved so consistent: it allows you to learn quickly, with a little room for error. There are no vices, no nervous twitches: the Elan simply does what you ask and doesn’t bite too hard if you ask the wrong thing of it.

The harsh metallic rasp of the twin-cam dominates proceedings well before the needle is even halfway around the Stack Chronotronic rev counter. The same gauge can also be used to measure the breadth of the driver’s grin. And this is a Lotus, so it does corners very well indeed, remaining superbly composed whether the turns are fast or slow, always giving you total and clear feedback. After a dozen or so joyful laps of Mallory Park, the belief that you can go a bit harder and faster starts to push that calming hand away. A bang from beneath brings me down to earth and back into the pits for investigation. It’s just a rear spring seating itself, or is that where that calming hand went?

Now it’s time to tackle the even less compromised Snorkel Car, which is much further removed from the Europa road car that it resembles. At first it feels as uncomfortable as just about anything I’ve sat in, offering only a roughly shaped tank-tape-over-foam ‘seat’. But, with an additional rectangle of foam that is all you get for adjustment, the pedals are within reach and I’m strapped into the full harness and off. Once you’re under way there’s too much to think about and any discomfort is soon forgotten.

The Hewland ’box has a dogleg first that you drop a flap to lock out once moving, leaving four other closely spaced gears operated by a fierce clutch that hates low revs and makes it easy to stall. At speed it’s fine, though fast downchanges without a graunch take practice. I might be able to carry more speed through the hairpin without the need to stay clear of Mallory’s post-race-meet kerb painters, but second gear exits bring a cough, a spit and a twitch before the 47 hits its power band again and is catapulted towards the Elbow, a downhill left-hander that you just keep accelerating through on to the straight. This sequence is where the 47 feels most impressive, in confident defiance of the laws of physics.

How this car was ever used on the road beats me, it simply will not be driven slowly. All the time it goads you into going faster, offering great assurance, though you are always aware that this is a wilder child than the Elan 26R, with its mechanical mass behind you. That’s a feeling enhanced by the tingling that works its way through the seat and into your spine at over 6000 revs: nowhere near the 8000rpm redline. At that level you are also being deafened by an engine that sits an undeadened 6in from your left ear, yet it doesn’t matter – it’s all too much fun and the next corner is beckoning. There’s no speedo to warn you to slow down, just that same nagging reminder of its historical and monetary value in relation to my limited track experience.

These two machines represent a pivotal piece of Lotus history: recognisable road cars that practise the Chapman mantra of added lightness to its ultimate degree. That they not only survive but are still being used in competitive anger is a great credit to Pat Thomas. His hardest job now is choosing which one to race.