Hispano-Suiza H6: the best car in the world 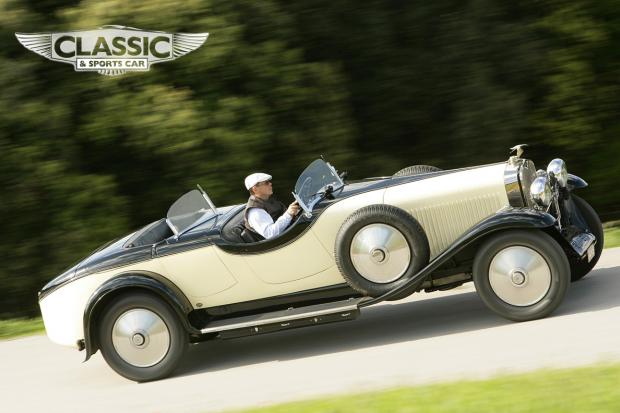 Forget Rolls-Royce, the Hispano-Suiza H6 was the finest machine for the super-rich to cruise into the Charleston age, says Mick Walsh.

Rolls-Royce must have been vexed by the buzz that surrounded the launch of the Hispano-Suiza H6 at the 1919 Paris Salon. For such a large luxury car, the new model – designed by the brilliant Swiss engineer Marc Birkigt – not only looked imposing, but also bristled with innovative features. The firm’s aero experience was clearly evident in this vintage exotic. Under the long bonnet, the all-alloy 6.6-litre straight-six, finished in signature gloss-black paint, was in effect one bank of Hispano’s magnificent V12 aero engine, with its overhead camshaft driven by a vertical shaft following aviation practice.

Just one twin-choke updraught Solex served the engine, mixing fuel with air warmed by the crankcase. Twin-plug ignition and Hispano’s patented threaded-cap valve stems both featured in this handsome, compact unit, which would have impressed even Ettore Bugatti. The auxiliaries were kept hidden, like servants in a grand château, and the crankcase was stretched wide to meet the chassis sides and make the engine bay even tidier. Peak power was 134bhp at 2750rpm, with maximum permitted revs at 3000, but some reports claimed that the factory was over-optimistic and 115bhp was closer to the truth. Whichever way, the power output was huge compared to rivals, with Rolls-Royce mustering around 70bhp and Isotta Fraschini about 80.

When most makers were still boasting of having four-wheel brakes, Hispano was far ahead of the game with its servo assistance integrated with the gearbox, a design patent that Rolls-Royce carried through to the 1965 Silver Cloud. The conventional deep-channel chassis was well braced by a finely cast aluminium bulkhead.

Sporting motorists at the Paris show may have scoffed at the three-speed ’box but Hispano, like many quality firms, regarded gearchanging as an operation unfit for gentlemen, and claimed that the engine’s torque would provide ‘smooth and flexible’ performance whatever the route. Frustratingly, pre-war road testers didn’t report torque figures but the H6B was reckoned to give 350lb ft at just 1600rpm. No wonder it could accelerate in top from single figures to 60mph in just 30 secs. The H6B’s pace clearly matched its impressive stopping power, which all underlined its bold claim to be ‘the best car in the world’.

At the 1927 London Motor Show, a fascinating wager was born between lightweight body designer and Hispano loyalist Charles Weymann and a group of Rolls-Royce engineers. The discussion attracted the attention of American Fred Moskovics, who insisted that the latest Stutz was the car to beat. The initial challenge was a race from London to Nice for a $25,000 prize (about £5000), but Rolls management vetoed its involvement. Eventually the rivals’ race was planned for a closed venue, with Brooklands or Montlhéry mooted before a 24-hour run at Indianapolis was agreed. On 18 April 1928, WW1 ace Eddie Rickenbacker flagged off the Hispano and Stutz, both with sports two-seater bodywork. The Hispano was a tour ahead after 16 laps, and by the 57th circuit it was all over for the US team because the Stutz had broken a conrod. Although the Americans won a second match with a replacement Stutz, Hispano had already reaped the publicity from the first run. Famous French journalist Charles Faroux was another Hispano stalwart and would willingly take bets to prove the H6’s torque, claiming that he could average 60kph between Paris and Lyon in top gear without exceeding 70kph.

Not surprisingly, this fabulous chassis attracted the finest European coachbuilders, all keen to demonstrate their skills – particularly for concours beauty pageants. The spectacular H6B dual-cowl tourer featured here was ordered new in 1929 by the wealthy Escoffier family of Paris, who had Louis Gallé design the body. Based in the Boulogne-sur-Seine region, Gallé was influenced by aviation and his designs featured tapering lower body sides. The original profile sketches show a more rakish shape with low ‘duval’-style split ’screen, plus separate cycle wings. Other contrasting details include twin footplates, louvred chassis skirt, bobbed tail and stork emblems on the rear doors. Perhaps the family decided that the sporty tourer was impractical. The body was completed by Carrossier Dubos, but the car has always been known as the Gallé Hispano. In the 1970s this highly original beauty was acquired by Nicolas Seydoux, who had it repainted and re-upholstered, while an overhaul of the engine in 1999 confirmed the H6B’s low mileage. At the 2000 Pebble Beach Concours d’Elegance, the Gallé Torpedo won its class and came close to clinching the prestigious Best of Show crown, but was just pipped by a Figoni et Falaschi Delahaye 135 roadster.

With the tourer weighing in at close to two tons, I had no expectations about the H6’s sporty appeal despite the model’s competition exploits in the hands of André Dubonnet. British Bugatti ace Grover-Williams entered a stately sedanca de ville in the 1926 Rallye Monte-Carlo, but the H6 was better suited to relaxed, long-distance touring across Europe. Sitting imperiously behind the broad four-spoke wheel, with your back bolstered by an extra cushion, you enjoy a commanding view of the long bonnet and the road ahead. The packed dashboard is the vintage equivalent of an expensive chronograph with its spread of quality Lenvex dials, including an eight-day watch. The ignition switches in the centre even allow the driver to select either or both sets of plugs. To give more room, the gearlever is positioned to the driver’s right with the handbrake. The three-speed gate has reverse on the outside-rear slot, with second across and forward and top a smooth drop back. Birkigt’s engineers maintained that, due to the H6’s prodigious torque, just three ratios were needed, with first only really required for hill starts. Read any period road test and the Hispano’s third-gear acceleration from crawl to gallop was a much-admired feature.

Our route included several tight, steep corners, but the Gallé burbled effortlessly around in top without protest – just as well, because the steering requires both arms. After a run up the twisty Alpine cols you’d step out with Popeye-style muscles, but stroking along open roads the action is smooth and well weighted. At 70mph the pace is relaxed thanks to the big, smooth ‘six’ and inspiring straight-line stability. The long leaf springs provide an impressively supple ride – a ‘magic carpet’ said The Autocar in 1920 – while the engine remains refined even when pulling hard. Best of all are the fantastic servo-assisted brakes, which pull up the weighty tourer strong and straight every time. Contemporary tests reported that the H6 stopped as though it was ‘being grabbed by a giant hand’.

Overall, the Hispano feels more of a driver’s car than a rival Rolls or Isotta Fraschini, and few have driven them more than Nick Harley. After displaying his superb Van Vooren-bodied C coupé – the last of the line with 7982cc motor and 150bhp – at Rétromobile in 2008, Harley thought nothing of motoring home to the South of France. “For me, it’s not just the driving experience – I enjoy the whole package,” enthuses Harley. “The simple, efficient engineering makes for an effortless vintage drive. The light steering – when you’re on the move – good handling and wonderful brakes, all coupled to the excellent torque, make it ideal for touring. You can stay in third all day and she’ll pull away from 5mph. It’s no Alfa, but quite sporty for such a large car. For cars with heavy limousine coachwork, it’s definitely a job for the chauffeur!”

Driving an H6B today is a marvellous opportunity, but during the ’20s the pride of ownership must have been quite something. Even Bentley boys such as Glen Kidston and Woolf Barnato were tempted by Birkigt’s motoring marvel, but luckiest of all was photographer Jacques-Henri Lartigue. His privileged, carefree lifestyle during the ’20s happily combined his interests in beautiful girls and motoring. Lartigue had been captivated by speed since childhood, and many of his famous images feature a magnificent Labourdette-bodied H6B tourer with the windscreen removed. Maybe he just liked seeing his pretty companions wrapped in big coats with flying helmets and goggles, but those windswept trips from Paris to the Côte d’Azur must have been wonderful in his Hispano.

This article was originally published in the June 2010 issue of Classic & Sports Car magazine, which retains the copyright to all words and images. Click here to see the terms and conditions.