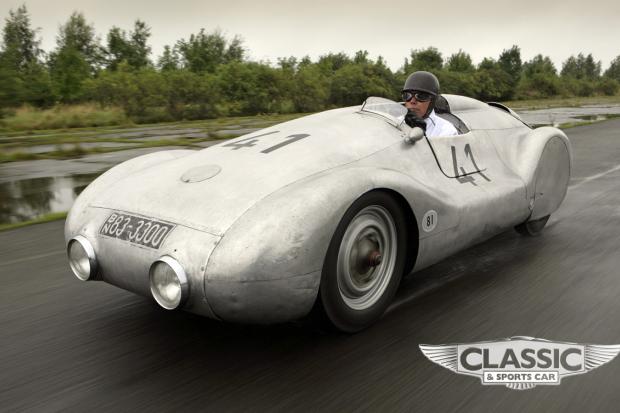 International motor sport grids may have been devoid of silver cars during the early post-war years but in their desolate, war-torn homeland, speed-hungry enthusiasts went to hugely resourceful lengths to get back on track. With no new cars available, the best pre-war designs were remodelled as specials. Like the Fiat Topolino in Italy, the VW Beetle was the focus of much creative thinking. Coachbuilders popped up across Germany to update Ferdinand Porsche’s iconic people’s car. Most successful of the racers was the now little-known Petermax Müller, who dominated the junior classes with his streamliners. Looking like a two-thirds-scale Auto Union record car, this 1100cc rear-engined wonder blitzed everyone at new park circuits such as the Aachen Forest and Braunschweig. In ’48 and ’49, Müller was crowned German sports car champion, and by ’51 he’d won 60-plus races before turning to sponsored record attempts.

Born in 1912 in Potsdam near Berlin, boatyard owner’s son Müller was fascinated by cars from a young age. By the early ’30s he was running a DKW dealership in Berlin and venturing into motor sport. He graduated from sidecars to the Auto Union factory team to impressive effect, with class wins on the Monte-Carlo Rally in ’38 and ’39 in a 1000cc DKW. In 1939 Müller played a key role in the design of the streamlined Wanderer sports cars built for the Liège-Rome-Liège rally, one of which he drove to third place.

As Germany gritted its teeth for a drawn-out post-war revival, Müller settled in Velpke where he developed a thriving VW, and later Porsche, dealership in Hanover. A shrewd player, Müller combined all his local farming and industry acquaintances to secure special parts for his new sports-racer in the late ’40s. ‘Müller knew where to get butter and sausage,’ recalled the racing Baron, Huschke von Hanstein. ‘His friend, a dairy owner, would occasionally slaughter a pig without permission, or a small ox might suddenly drop dead. These of course provided an excellent basis for bartering with trading partners at the nearby VW plant.’ Bored with building the standard Beetle for the British, engineers were only too happy to exchange parts and engineering work for a sack of potatoes or a kilo of butter in those tough times. One such trade included prototype high-performance cylinder heads.

Late in 1946 Müller took over a deserted dairy and started building his first VW special based on a Kübelwagen chassis. From Berlin he enlisted a talented ex-aviation specialist to make his self-designed body. Such was the streamliner’s success, Müller made six further sports-racers and sold them for 20,000 Marks each. Just two survive, including his own racer turned record car featured here. The Beetle platform was shortened 8in (203mm), with lowered Schwimmwagen front end for its narrower track and a negative-camber rear set-up. The trick engines, with radical camshaft, polished ports and high compression, developed an impressive 56bhp.

After his class domination, Müller and his friend von Hanstein set their sights on international speed records with a detuned 1086cc Beetle motor. The first attempts, at Hockenheim in November 1946, ended in disaster when a dog strayed on to the course and Paul Schweder spun into the wall trying to avoid it. Due to the car’s broken front suspension and crumpled body, the team had no choice but to abandon the attempt after 34 hours and 2008km. Small consolation was the 17 records broken before the shunt.

Müller and his team were the first Germans to compete post-war in an international event when they headed to Sicily for the 1950 Targa Florio, but that year’s focus was a trip to Montlhéry to challenge the 4000km record held by a French Simca team. With a rev limit of 3300rpm, long gearing and special tyres from sponsor Metzeler, the polished slug rasped around the 1.4-mile banked track for 48 hours at an average of 76.68mph for 10,000km at 26mpg.

Porsche had just celebrated his 75th birthday and claimed the new German records were his best present ever. Among the drivers was Walter Glöckler, another key figure later linked with Porsche.

Müller wasn’t interested in his past and even at 60 he entered the 1970 Monte, taking the team prize with a Porsche 911. For years his old record car was kept in garages behind his Hanover dealership and, during the 1990s, the timewarp machine was loaned to the VW museum. When Müller died aged 90 in 2002, his widow decided to sell it and the Prototyp collection acquired it. On arrival to collect it at Wolfsburg, the factory staff didn’t even know it was still in the basement storage. Since its acquisition Thomas König and Oliver Schmidt have researched its history and tracked down a wealth of memorabilia.

In preparation for an invite to this year’s Goodwood Festival of Speed, the Müller special was sent to Porsche specialist Andy Prill. For the first time since it was built, this fascinating machine was taken apart, investigated, and sensitively rebuilt. It even had the original spare. “We had little data on the car when it arrived,” says Prill, “but the engineering was impressive. In spirit it’s right in tune with early Porsches. It was a real education to rebuild and I learnt a great deal.” From a master quad-cam Porsche engine fettler, that says a lot about Müller’s ingenuity.

The first stage was to rebuild the engine, which hadn’t run for decades: “It still has its original magnesium crankcase and one theory is that it originated from Porsche’s war design bureau. The German Navy wanted a lightweight Sturmboot for which this Type 170/171 engine was developed.” When the project was abandoned in 1943, the engines were sent back to Wolfsburg where Müller spotted the heads. Co-owner Schmidt reckons three or four prototype units were made: “The basis is an 1100cc Beetle motor but with experimental, fully hemi heads and special valve angles. The rocker covers are gas-welded and couldn’t be made that way commercially. The barrels don’t look cast which again suggests it was a prototype. The Mahler pistons are beautiful with long slipper skirts. We discovered the engine ran a high compression of 14.7:1, which wasn’t a problem with a small-capacity engine. The manifolds look home-built. For races it undoubtedly ran methanol but we run a special mix because it’s difficult to get here and a dirty industrial chemical. Another clever feature is the back-to-back VW fans, similar to the Carrera layout. And the shroud is welded together as you’d expect for a one-off racer. ”

Prill’s team went to great lengths to preserve and match the car’s patina: “ We had to use a new crank and bearings but the lovely lightened rods are original. We even cleaned up all the plug leads with thinners so we could find new ones that matched. There were no shields for the exhausts and the tail would get so hot you could fry an egg on it. We had to make new covers.”

News of the rebuild attracted plenty of Beetle experts who confirmed the chassis spine (1-063928) was probably a WW2 Kübelwagen. The wheels are early VW while the brakes are Beetle steel drums but with finning shrunk on to them. “The huge amount of effort and trouble that’s gone into this car is staggering,” says Prill.

The bodywork is a jigsaw of 20-plus sections including the under-tray – all riveted together. Clever details include quick-release clips for the rear spats. “You can see the aircraft experience in much of the construction,” says Prill. “The body is extremely light and slippery.” A novel touch is a reversed Heller sidelight turned into a mirror.

Only a privileged few have driven the Müller special and its wonderfully preserved state makes the occasion even more special. It would have been epic to have taken this 550kg featherweight back to Montlhéry, but the bleak conditions on an ex-USAF base in Essex echo the car’s ill-fated first record attempts. When the rain finally lets up I contort into the tight cockpit. For a record car that ran for long, relentless stretches you’d expect a better thought-out workplace. In classic Silver Arrow style, the steering wheel has to be removed from its splined column before entry is possible. The record team must have all been short for even my 5ft 7in is tight in here. The upright seat is basic with a simple padded cushion and the instrument cluster, with big VDO speedo and rev counter, is clearly visible through the broad, three-spoke wheel. With tacho marked to 8000rpm, Prill reckons the Germans were too logical to fit it just for show and probably ran to 7000rpm in anger but we’re limited to 4800rpm today. My eyes are more focused on the oil temperature with this historic air-cooled flat-four. The pedals are typical early Beetle and mounted off the spine with a roller throttle. At least there’s a footrest for those long, tedious record sessions. The gearstick sprouts upright but is dwarfed by the huge handbrake. All the brackets and frame are extensively drilled.

Time to start. Even with the tamer compression of 12.5:1, this engine doesn’t like to wake from cold and the carbs have to be primed with a syringe of fuel. After cranking over to build compression it finally chugs into life, the exhaust emitting a bizarre glugging note that sounds like a wino knocking back a bottle of whisky. As it warms and settles to idle, the noise is more like a vintage aero motor running under water. Carefully feeding in the revs to avoid stalling, the clutch bites and it’s off. As the Solex throats open and revs build, the engine gets smoother and, after a few cautious runway passes, I stretch it to 4000rpm. The effect is dramatic on cam, with a turbo-like rush launching the car faster. Running on skinny 16in tyres, it starts to feel nervous and at one point where there’s a gap in the old runway hedge, a crosswind knocks the special off course. With its slow, finger-light steering, it would be a challenge to catch at top speed. Around wet corners the Müller is even more nervous as the heavy back quickly breaks traction yet it feels progressive up to a point. The gearchange initially feels rubbery but once up to speed the gate gets more positive. The brakes too, thanks to the lack of mass, feel more confident.

As the rain returns I pull up, unbolt the wheel and clamber out full of respect for Müller, von Hanstein, Polensky and Glöckler. No wonder they took their partners along to the French speedbowl. Running flat-out for 48 hours must have taken critical focus. But, away from gloomy recovery in Germany, the trip to Montlhéry with motoring chums must have felt like a holiday.

How to... store your classic car