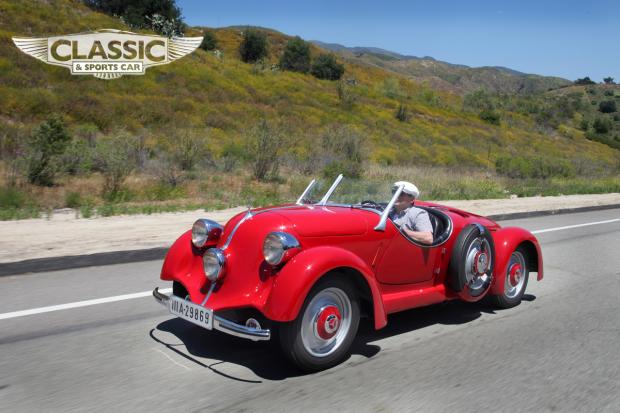 Name the first production mid-engined sports car. It’s a tricky automotive quiz question that probably has the 1960 Bonnet Djet as the listed answer. Porsche anoraks will claim that the 550 Spyder predates it, but few recall that Daimler-Benz developed the idea 75 years ago for a 1500cc roadster.

For most, the pre-war image of the German giant is grosser state saloons, glamorous supercharged roadsters and exotic Grand Prix racers, but the Stuttgart manufacturer was just as serious about its bread-and-butter ranges, which included the advanced Type 130H (Heck) launched in 1933. ‘Heck’ stood for rear, because the 1308cc ‘four’ was mounted behind the rear axle. This two-door four-seater was being built six months before Ferdinand Porsche signed a contract with Hitler to develop the Volkswagen, which didn’t enter production until 1940. The handling was tricky, with its rear swing-axle and pendulum engine position, but the car bristled with innovation. More than 4000 were built during those tough economic times and, to promote the lower-range models, in November 1933 chief engineer Max Wagner proposed the idea of a mid-engined sports GT to compete in the 2000km durch Deutschland trial.

Unlike the Type 130, the new streamlined W30/Type 150 two-seater followed the layout of the advanced 1923 Benz Rennwagen Heckmotor, better known as the Tropfen-Wagen (teardrop-car), with engine and gearbox turned through 180º and mounted ahead of the back axle. Ex-Mercedes man Porsche was developing a similar layout for his Auto Union P-wagen GP car in his Stuttgart-based Konstruktion Büro.

The body for the T150 ‘Sportslimousine’ was built in the custom division of the Sindelfingen works. The design looked very Beetle-esque, with large twin scoops on the roof to draw cool air into the engine, while restricted rearward vision was improved by a central roof depression with a specially sited mirror. Unlike the production L-head ‘four’, the new sports model featured a neat single-overhead-cam 1498cc engine that produced 55bhp at 4500rpm with a single Solex 30 carburettor. Above the transaxle sat a huge double-core radiator, through which air was forced by a big squirrel-cage blower that directed air to the carbs, too. The engine was also used in several front-engined Type 150 cross-country trials cars during the 1930s.

Management was concerned that the 500-vehicle homologation requirement for the event would be a struggle to meet, but the use of many T130 production parts made the figure realistic. The tubular backbone chassis with Y-shaped rear to carry the motor followed the ideas of Hans Ledwinka at Tatra, and featured twin transverse leaf springs at the front and coil-sprung swing-axles at the back. Six Type 150 coupés were ready for the 2000km trial on 21-27 June, the route encircling Germany from the start/finish at Baden-Baden. Two cars were forced to retire, but the surviving four all took gold medals, including 25-year-old race mechanic Hermann Lang in his first competitive car event.

The Type 150 coupé also impressed in the 1934 Liège-Rome-Liège Rally when Hans-Joachim Bernet set the pace, leading the event at Pisa. The Berlin-born driver finished penalty-free and took the award for the highest-placed closed car on the event. It’s believed that just 25 Type 150s were built, but sadly none of these innovative competition coupés survive.

After the firm’s success in the 2000km trial, Daimler-Benz director Wilhelm Kissel insisted that it was “absolutely essential to produce a streamlined sports car” and in November 1934 the board agreed that two T150 roadsters would be built for the Berlin show. Again the design was produced in-house, but the mid-engined roadster dramatically contrasted with the rather functional coupé. To increase luggage space, spare wheels were mounted on either side just behind the cockpit, while the mid-mounted layout was accentuated by a long, pointed, boat-like tail with illuminated numberplates fitted flush with the body. The cab-forward nose, with no radiator shroud, looked like no other Mercedes and featured triple headlights including a ‘Cyclops’ central lamp. A speedboat-style split windscreen and cutaway doors emphasised the sporty character of this bold new model.

Two cars were completed for Berlin, one for display and the other for journalists to test. How many were built remains a mystery. Factory figures suggest 20, but Sindelfingen records state five – one in ’34 and four in ’35 – and order books report only two sales. Of these, just one survives. It was found in the early ’50s and, thanks to the intervention of DMG (Daimler Motoren Gesellschaft) board member Jakob Werlin, this rarity was saved for the factory collection. Some believe it to be a rebodied 2000km team car.

If the Type 150 looks unusual today, imagine its impact in Berlin. Some reports suggest that the first roadster was painted yellow, others light blue, but whatever the colour the snub-nosed drop-top was too radical to tempt buyers – particularly when matched against glamorous front-engined sports models. Even today the slug-like form provokes surprising reactions, with photographer Mann saying it reminded him of the Messerschmitts in the movie Brazil. Mercedes certainly planned production, because it made a stylish brochure with artwork of a red roadster that, thanks to artistic licence, was more rakish with a lower body, sleek ’screen and wire wheels with whitewall tyres. The model’s biggest problem, however, was association with the mass-produced Type 130 and 170H.

After the T150 had spent many years as a static display, the idea to rebuild it came about by accident when historian Karl Ludvigsen asked to visit the museum to research the engine. “There were no drawings available and I was fascinated to see how the overhead-cam layout was driven,” says Ludvigsen. “The T150 was not part of the permanent display in the new museum, so it was wheeled into the workshop and we took the valve cover off. There was nothing exotic, just a neat helical drive, but it looked in good shape so the exciting idea to get it running was proposed.”

With the Classic department last year focused on restoring the W25 racer, the Type 150 was sent to its California facility in readiness for the design’s 75th anniversary. The timing was tight, but manager Michael Kunz and specialist Nate Lander relished the project. “It was a thrill to be trusted with this unique car and we were sad when refitting the body that so few had seen the stripped car, but the pressure was on to meet the deadline,” says Lander. “The main chassis tube has extruded ends, with front and rear riveted together. The loom runs down the centre, which was a challenge because we had no diagram. The engine still has original pistons and bearings, but the long gear linkages were tricky to set up. Thankfully the wood frame was in good shape, so the body went back on with little work.”

No matter how long you’ve studied the Type 150’s profile, it’s still an odd feeling as you unlatch the rear-hinged door and climb aboard. Never has that illustrious three-pointed star been so close to the driver. As with the BMW 328, you feel part of the car rather than sitting on it. Even without side deflectors, the ’screen offers good protection and it’s a snug, comfortable cockpit. The comprehensive spread of instruments includes a large 140kph speedometer and a 5000rpm rev counter, flanked by gloveboxes at the dash ends. The gearbox gate is clearly defined, with the lever close to your right knee.

Like the Type 130, the roadster has a four-speed gearbox. First is on a dogleg, with second and third in the same plane, but fourth is a clutchless change not unlike a pre-selector and takes practice to perfect. First move the gearstick directly to the right from third, then forward, before briefly lifting off to select the ratio. For the downchange, again the lever is moved back and sideways before you feather the throttle to engage the lower gear. As with the Type 130, the idea was to save the clutch and provide a swifter change for overtaking on the new autobahns. The action is stiff, possibly down to linkage alignment, but the hardest discipline is to stop yourself pressing the clutch for the top changes.

The steering is a disappointment after the light, direct action of the Type 130 and 170. For some reason, engineers switched from rack and pinion to recirculating ball for the T150, but it feels lifeless and surprisingly heavy considering the weight bias over the back end.

The engine, too, despite its extra horsepower, isn’t as willing as the smaller cars and struggles up steeper sections of Lawrence Canyon Road. The throttle’s short travel demands slick footwork to avoid abrupt acceleration, but the clutch action is smooth and light. The strangest sensations are the hot air that blows through the rear vents on to your back and the effect of wind rush drowning out the engine’s thrum at speed.

Pushing the T150 harder through the bends along a twisty route at the base of the Santa Ana mountains, there’s little roll and the roadholding feels surefooted compared to contemporary sports cars. There’s a bias towards understeer, but in faster, open bends the car feels impressively neutral with no hint of oversteer, although if you backed off abruptly the rear might start to take control. Combine the light, sharp steering and more responsive motor of the T130 with the mid-engined layout and precise gearbox of the T150 and you’d create something really special. You have to applaud Mercedes engineers and management for taking such a bold direction, but ultimately the Type 150H just didn’t fit the company image. The short nose and back-to-front styling made it look a misfit, but was copied by some influential specials. Ferdinand Porsche continued to pursue mid-engined designs, including the stillborn Cisitalia Type 370 coupé, but it was another 30 years before the layout was properly developed for high-performance road cars. Little wonder Daimler-Benz is marking the 75th anniversary of this non-conformist sports car, but just imagine what could have happened if it had developed the car further as a Le Mans streamliner with a detuned GP motor.

This article was originally published in the August 2010 issue of Classic & Sports Car magazine, which retains the copyright to all words and images. Click here to see the terms and conditions.