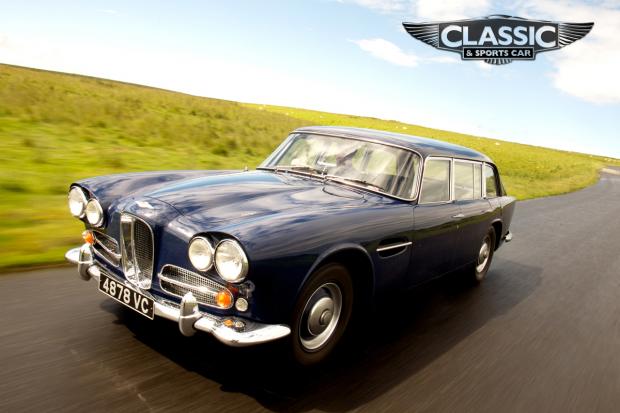 For Lagonda fan Jonathan Radgick, the perfect practical classic was obvious – all he had to do was build one, says Martin Buckley.

For many of us, the fantasy classic estate car or shooting brake is the one they never got around to making at the time. Desirable ‘period’ wagons with power and presence are few and far between. In fact, outside of a few coachbuilt Zephyrs and Super Snipes, your luxury estate car horizons don’t begin to expand until well into the 1970s when they became part of the fully catalogued mainstream.

When looking for a car to transport his dog four years ago, Aston enthusiast Jonathan Radgick faced just such a dilemma. “I’ve always liked the Lagonda Rapide and have a friend who had one for many years,” says Radgick. “We used to discuss what would be the best car to take the dogs away with you, but I knew that all the old ‘woodies’ were just too slow and agricultural, and when you go back to the big Fords and Humbers of the ’60s you realise how unrefined they are for everyday use. But then it struck me. The best thing to do would be to take a Lagonda Rapide and turn it into an estate!”

Radgick realised that some people might not be very comfortable with the idea of putting such a rarity under the knife: “They only made 55 of them so you think twice about ‘vandalising’ one. But, having said that, they don’t have a particularly high value, they are not really appreciated and the survival rate is high [around 90%].”

For me, the notion of a Rapide wagon has a neat historical legitimacy about it. David Brown, after all, virtually invented the idea of an exotic estate car as a vehicle for dog-related country pursuits with his DB5 shooting brake – which led to the later Radford 5s and 6s. Earlier, he even sanctioned two shooting brake versions of the Lagonda 3 Litre, which were used by the Aston works as service barges for the racing team (sadly, they are both thought to have been scrapped many years ago).

Had the Rapide been more successful, Radgick reckons that a few shooting brakes would have been built but it was nowhere near the top of anyone’s list. There was a limit even to Brown’s indulgence when it came to losing money building exotic cars, and the Rapide counts as perhaps his only serious flop.

Brown loved the idea of a new Lagonda that he could be driven in and drive himself, plus he wanted to revive a marque that had been dormant since 1957. He was very much his own man and forced the development of the Rapide through against the wishes of John Wyer, Aston’s racing supremo. Wyer hated the Rapide – and effectively resigned over it – because it got in the way of DB4 production and was by no means straightforward to build. Styled by Touring on a stretched DB4 platform, the Rapide was technically superior to the two-door car in its use of a bored-out version of Tadek Marek’s 4-litre engine plus Harold Beach’s de Dion rear suspension, features that wouldn’t come together in an Aston until the DBS.

In a sense, the Rapide was the first four-door supercar – pre-dating the Maserati Quattroporte by two years as a 130mph exotic saloon – but its thunder was stolen at the 1961 Earls Court show by the launch of the new Jaguar MkX, priced at less than half the Rapide’s £5000.

Brown flogged the cars ‘on the golf course’ to his powerful friends: Radgick’s example is an early one sold to the Sultan of Oman in 1961. It spent some time in the States, then Grimsby, and Radgick found it for sale in restored condition with specialist Desmond Smail.

Restoring a Rapide will always cost more than the car is worth, but there must be some potential for the cars to rise in value. That said, perhaps there aren’t enough of them to make critical mass: not enough people have even seen one.

Like all but a handful of Rapides, chassis 107R – finished in its original Ming Blue – was an automatic so one of Radgick’s first jobs was to give the car to Graham Whitehouse for conversion to a modern Jaguar-sourced four-speed ZF auto. “The original Borg Warner DG ’box isn’t up to it,” says Radgick. “I would have liked a five-speed ZF manual, but they are so expensive [£10,000] even if you can find one – and it’s not as though it is that special a gearbox to use. I could have put a modern manual in, but it was going to be a lot of money and I’m very happy with the automatic. It’s superb.”

Choosing a company to do the body conversion was relatively easy. Radgick had already used Carrosserie Ltd of Barnard Castle to repaint his DB MkIII drophead. “Without really knowing exactly how we were going to do it we just made it up as we went along and started by cutting the roof off and removing the boot lid,” he explains. “Then we had to take out the rear seat: I wanted a proper folding bench if I was going to go to the trouble of making an estate.” The rear heater normally lives under the parcel shelf, but for the estate it has been relocated under the seat. Like the saloon it doesn’t have much legroom in the rear, but once you’re in it’s comfortable, if snug.

The most difficult task for Radgick and Carrosserie was the tailgate. “We were going to make it from scratch,” he says. “So I went to Pilkington to see about making a rear ’screen for it. They said: ‘We’ll do it. The first one will cost you £14,000, but after that they are £150 each.’”

In the end Dick Francis of Carrosserie went down to the scrapyard. “He took his tape and measured up loads of hatchbacks,” says Radgick. “Eventually he found one that was a pretty good fit.” Radgick is coy about which car donated its rear hatch and glass because he has a bet running with a friend – £20 says he can’t guess what it’s from. Francis took the whole top half of the hatchback and mated it to the back end of the original Rapide bootlid. Apart from the lack of chrome trim around the ’screen rubber it looks convincing and, being from a modern car, it has the advantage of gas struts, a heated ’screen, plus a rear wash/wipe with its reservoir hidden behind the carpeted side bay – which meant the electrically operated fuel flap had to be modified and repositioned.

Making the side windows was tricky: “We had to reshape the tops of the doors, which were then coming down to fit a differently shaped C-post. Then we had to make new frames for the doors and side windows. Amazingly, we got the last bit of proper chrome channelling from the factory.”

Given that the rear seat had to be recreated anyway, Radgick didn’t feel too bad about re-trimming the entire car. “It was in good condition but the seats had been recovered in white and it looked horrible,” he recalls. “Plus it wasn’t practical for what I wanted.” To finish off the interior, Radgick wanted a load cover for the back: “I had to go around a load of car showrooms with a tape measure. It’s amazing how wide cars have become since the ’60s. In the end, I got one out of a C Class Mercedes estate that happened to be the right width, although we had to alter it because it wasn’t quite long enough. It just stops the dogs jumping over into the back seat.”

That Radgick really does take his dogs out in the Rapide Shooting Brake is evidenced by the hairs his golden retriever has left on the long rear deck. What’s more, the car often lives out in the rain (of which there is quite a lot in Northumberland) because it’s too long to fit in the garage without displacing one of his other cars. The collection includes a 1935 Aston Martin 1½-litre (just back from a holiday in northern France) the MkIII drophead, his wife’s DB5 (owned for 20 years and used regularly) and a pre-war Lagonda M45 saloon. Radgick doesn’t only covet the products of Feltham, Staines and Newport Pagnell – there’s also an intriguing XK120 modified by George Barris in his collection, allegedly built for Elizabeth Taylor.

The Rapide wagon is a smooth drive, with loads of torque, slick gearchanges and eager kickdown. The high overdrive fourth gives an effortless feel in a straight line and the heaviness in the direct steering soon drops away on the move. You can hear a resonance from the silencer boxes that you don’t notice in a saloon and Radgick feels it’s a little noisier than he really wanted. It handles well though, the longer chassis making it possibly more predictable than a DB4, always at its best being driven through corners, and it certainly has a more supple ride. But Radgick is considering uprated rear shock absorbers: “It can’t handle serious weight. I bought a load of ceramic tiles and it couldn’t cope.”

This brave and inspired conversion took three years to complete. It’s good-looking, clearly inspired by the DB5/6 shooting brakes and faithful to Superleggera principles. “If it’s taken apart 100 years from now,” says Radgick, “nobody could tell the difference.” David Brown – if not John Wyer – would certainly have approved.