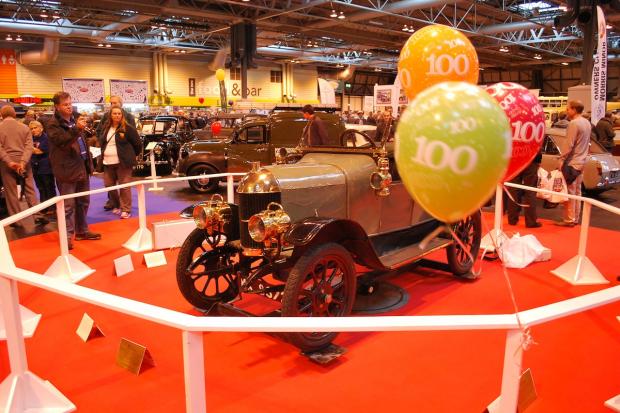 A packed room of 300-plus classic car club representatives attended the annual Classic & Sports Car Club Awards, held in association with Lancaster Insurance at the Hilton Metropole in Birmingham on Saturday night (16 November).

The trophies recognise the efforts of the classic car clubs, the backbone of the hobby, with a series of gongs celebrating both their efforts at the NEC and throughout the year.

This year's awards proved a very good evening for Morris clubs with the enormous Morris Centenary display co-ordinated by the Morris Minor Owners’ Club and Morris Register being adjudged the best large stand at the event (main image). With 'William' the oldest marque survivor on a turntable as the centrepiece, it was a hugely impressive effort.

There was more good news for the Morris Minor Owners’ Club when Ray Newell picked up the prize for Club Personality of the Year thanks to his tireless efforts not just in the high-profile centenary celebrations, but also to create a federation of co-operating Morris clubs.

The Morris clubs were even in with a shout for club of the year, but were pipped by the world's oldest one-make owners' club, the Jowett Car Club, for its unstinting efforts in 2013.

Other awards decided prior to the show included Best Club Run/Rally, snapped up by the huge charitable outings of the North Wales Classic Fords Snowdonia Tour and the Best Club Show/Event, awarded to the Rover Sports Register's Jubilee Rally held in conjunction with the Rover P6 Club and Rover SD1 Club.

Back at the show the Sunbeam Tiger Owners' Club scooped Best Medium Club Stand and the TR Register was given the salver for the Best Themed Club Stand.

The prestigious Car of the Show title went to the 1931 Rolls-Royce Barker Sports Saloon of Julian Bowen. The rakish two-tone Rolls has been a labour of love for Bowen who has covered more than 16,000 miles in it since its meticulous restoration three years ago.

Steve Horton's 1951 Škoda Tudor was another big winner, taking the C&SC Special Award for the car that stole the judges' hearts.

Club Magazine of the Year Spotlight, edited by David Walsh, and Sidelights, edited by Paul Lewis, Austin A30/35 Owners’ Club