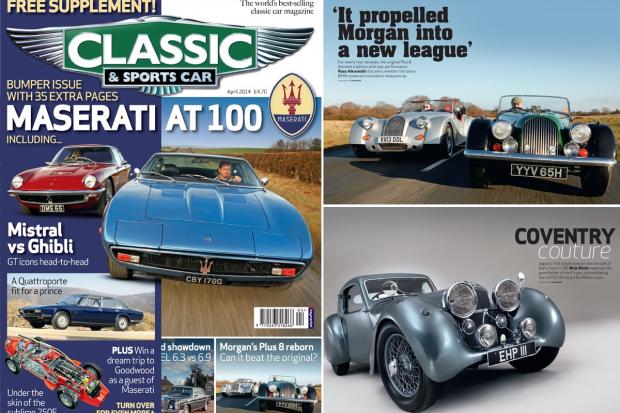 A stunning new issue of C&SC, complete with a free 35-page Maserati supplement, officially hits the news-stands in the UK this week (6 March).

The Trident marque takes centre stage in the April edition as we celebrate its centenary with a host of great features.

They include a showdown between Modena's most charismatic 1960s GTs, the straight-six Mistral and the V8 Ghibli, but we start the story with the first car to bear the famous badge designed by Mario Maserati – the Tipo 26.

We also examine the 'family tree' of Maserati's key players, get under the skin of the mesmerising 250F to see why it was such a world-beater and drive a one-of-two Frua Quattroporte.

The supplement is rich with history, with a scrapbook of sensational photos from the company's back pages, plus an exclusive interview with Sir Stirling Moss on racing Maseratis.

We round off our centenary special by talking to a very long-term Merak owner to see why the marque generates such devotion, and then answer the question that every enthusiast asks: can you really buy and run a cheap Maserati?

As if that wasn't enough, this bumper 308-page issue has myriad other stories.

We pit Morgan's latest Plus 8 against the original, offer an in-depth buyer's guide to Aston Martin's iconic DB2-MkIII and put a quirky DB Panhard through its paces on the road.

In the studio we have a magnificent one-off, the Jaguar SS100 Coupé concept styled by William Lyons himself and which stole the show at Earls Court in 1938.

James Page has been busy with a trio of pre-war Alvis competition cars that demonstrate why the Red Triangle marque had such a superb, well-earned reputation, while Paul Fearnley examines the life and career of forgotten Ferrari superstar Guy Moll.

If sporting estates are your thing, look no further than our twin test of Lancia Beta HPE and BMW 2002 Touring, while Malcolm McKay reports from an epic endurance rally around Cape Horn.

On the news front, it's been another busy month, with extensive reports on Rétromobile in Paris and the Bremen Classic Motorshow. Plus, don't miss your chance to win a dream day out at the Goodwood Revival courtesy of Maserati.

Add to that our top columnists, automobile, books and art, all the market news, auction results and analysis, historic motor sport, club news and updates on the C&SC fleet, as well as a wonderful Aston discovery in Lost & Found, and you have an unmissable issue of your favourite mag.

As is traditional, however, we kick it all off with our selection of free wallpapers for you to download (please read our terms and conditions first).

If this shot of a Panhard in an idyllic setting would look good on your desktop, then download it here