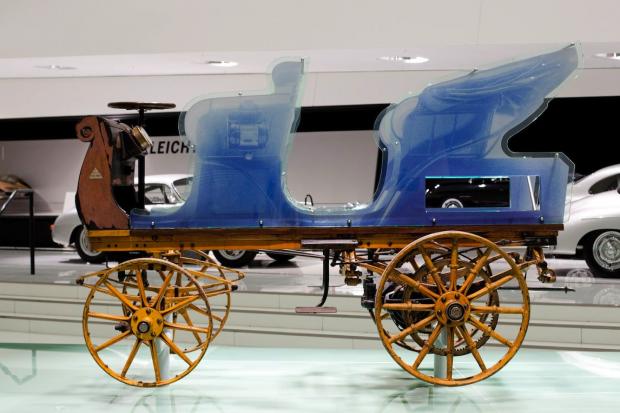 The first car ever designed and built by Ferdinand Porsche has gone on display in Stuttgart to mark the fifth anniversary of the Porsche Museum opening.

The 1898 Egger-Lohner electric vehicle C2 phaeton, usually just dubbed the P1, is original and unrestored and was one of the first vehicles registered in Austria, taking to the streets of Vienna on 26 June 1898.

Porsche engraved the code ‘P1' (for Porsche number 1) on to all of the key components of his remarkable creation.

The compact electric drive weighs just 130kg yet offers an output of 3hp. For short periods up to 5 hp could be achieved in overloading mode, allowing the P1 to reach speeds of up to 22mph.

The range of the vehicle was up to 50 miles and it boasted a Lohner alternating body, which allowed it to be used in both summer and winter.

The P1 appeared at a motor show in Berlin in 1899 and after that Porsche entered it in a 25-mile race for electric vehicles.

Despite running three-up, the P1 won the race by 18 minutes while more than half of the entrants failed to finish.

On 31 January Dr Wolfgang Porsche and Matthias Müller unveiled the P1 to an audience of invited guests, but it has now taken up residence for all to see at the Porsche Museum.