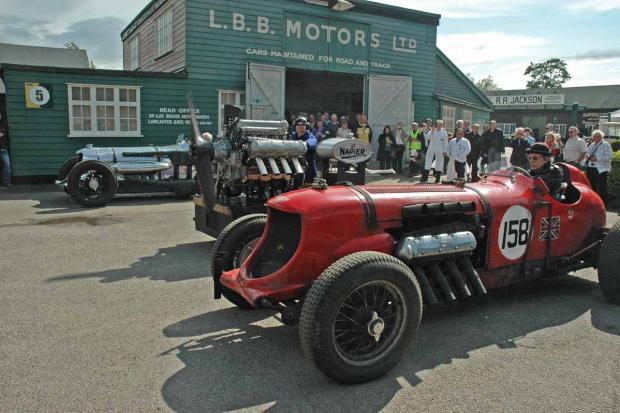 Aero engined leviathans stole the show at the Brooklands Double Twelve on 18-19 June.

On Sunday this awesome group was joined by Robin Beech’s 27-litre Merlin-engined Rolls-Royce Handlye Special which amazingly also competed in the driving tests for the Double Twelve event, as did Williams in his Bentley Napier (below).

Enthusiastic crowds gather around the ‘festival of litres’ and applauded after the group  switched off. Williams, ever the joker, handed around his signature bowler for donations towards fuel.

The main Double Twelve which combines driving test scores with concours results was won by Richard Wadman’s 1934 Alvis Speed 20 which has been in the family since the 1960s.  The Red Triangle marque had a good day with Trevor Wooding’s immaculate Alvis TD21 winning the Grand Touring class.

Highlight for many was the first chance in the UK to see the multi-concours winning 1940 Alfa Romeo 2500SS (below) of architect Corrado Lopresto. The stylish Italian sportingly entered the driving tests with the Bertone bodied black beauty.

For Saturday only the Vintage Sports Car Club ran a sprint on the Mercedes-Benz World track that attracted a diverse range of machines from Mike Gibbs’ Becke Powerplus to a pair of ERAs.

James Baxter was as focused as ever gunning his Alvis engined Frazer Nash special to a 41.34secs to take fastest time of the day while F1 engineer Robin Tuluie wrestled his 6-litre aero engined Riley Menasco ‘Pirate’ (below) to 43.49secs to claim fastest vintage car trophy. With just one arm Donald Day impressed all in his ERA R14B with a best of 49.04secs.

Day has owned the ex-Johnny Wakefield 2-litre ERA since 1958, a record
for the Bourne built voiturette racers, and on Sunday enjoyed a blast
up the test hill (below).

A selection of photos from the two-day event follows:

Double 12 had a class dedicated to the 50th anniversary of the E-type.

Other Cats were in attendance too.

As were plenty of other British brands on display.

Event celebrated the Morgan marque too.