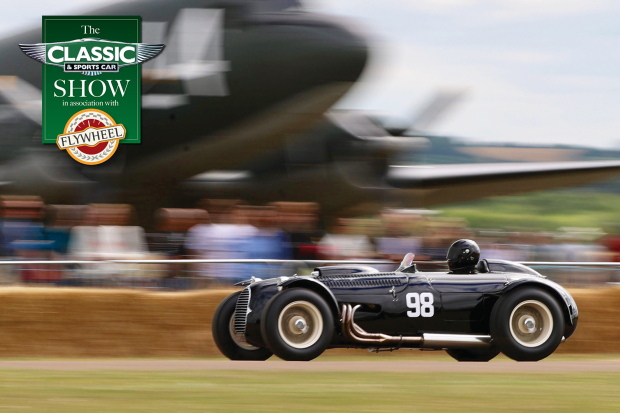 A 1926 Bentley that competed at Le Mans, an Aston Martin DBR4 that raced in Formula One and one of the earliest ever MGBs are among the track stars announced for the Classic & Sports Car Show in association with Flywheel.

Dozens of historic racers – some more than a century old – will appear on the demonstration track over the weekend of the show, which takes place on 23-24 June at Bicester Heritage in Oxfordshire.

As well as the '26 Bentley, other pre-war cars already confirmed are the ex-Raymond Mays ERA R3A, the first 2-litre ERA, and the 1935 Rapier Eccles Special, the only car to win on the Outer, Mountain and Campbell circuits at Brooklands.

Post-war competition cars up to the Show’s cut-off date of 1976, meanwhile, include C&SC’s own Simon Taylor’s wonderful 1950 HWM-Chevrolet – popularly known as the 'Stovebolt Special' – which was campaigned by a 20-year-old Stirling Moss in his first-ever works drive.

Also due to appear are some fascinating specials, from the aero-engined Fafnir and Menasco Pirate to the Alvis/Marendaz Routledge Special. 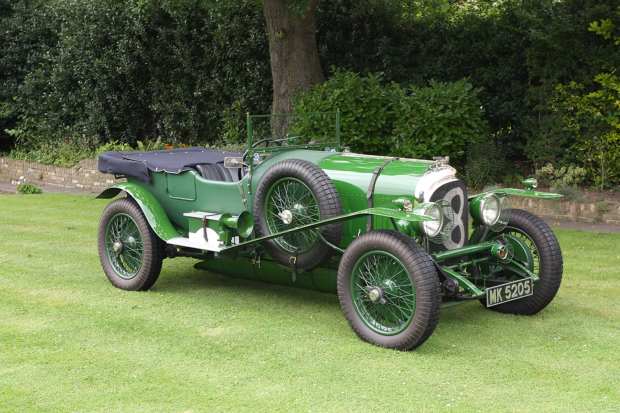 The 1926 Bentley 3 Litre Sports works car is sure to be one of the big draws at the weekend. It competed in the 1926 edition of the 24 Hours of Le Mans, with George Duller and Frank Clement at the wheel, but was unfortunately forced to retire with a ‘valve stretch’.

It also took part in six-hour races at Brooklands in 1926 and 1927 and the George Boillot Cup in France in 1927, and will appear at the show in totally original condition, including the running gear and body.

Three cars with Grand Prix history are already confirmed for the Show. Among them is the Aston Martin DBR4/2, up for sale with – and appearing courtesy of – Bicester Heritage's own Pendine historic cars showroom. (You can watch a lovely video of it in action above.)

DBR4/2 has lived an eventful life. Designed by Aston Martin to take on the Formula One big guns, with a front-engined, rear-mounted gearbox-cum-final-drive assembly, it was one of four DBR4s built in the late '50s.

It was raced in period by the great Carroll Shelby, but various mechanical problems meant it never fulfilled its potential, and an eighth in Portugal and tenth at Monza (both in 1959) were its only Grand Prix finishes.

DBR4/2 was then broken up by Aston Martin, who decided instead to focus on the Sports Car World Championship. And there its story might end if not for Aston enthusiast Geoffrey Marsh, who decided to reconstruct it using parts from various other period-correct AM racers.

The project was finished in the early 1980s, and DBR4/2 has since competed in a host of historic motorsport events including the Goodwood Revival and Members' Meeting; as a nice touch, its first proper outing came at the ‘Streets of Birmingham’ race in 1984, with none other than Carroll Shelby behind the wheel.

Other Grand Prix cars at the Show include a 1922 Sunbeam Grand Prix prepared for the French GP at Strasbourg and another Aston Martin, a 1936 2-Litre Speed Model.

The latter was raced at Brooklands in the 1930s, then driven by Richard Stallebrass post-War, but he was tragically killed competing in it at the 1948 Belgian GP. It was also owned in the 1990s by Pink Floyd's Nick Mason. 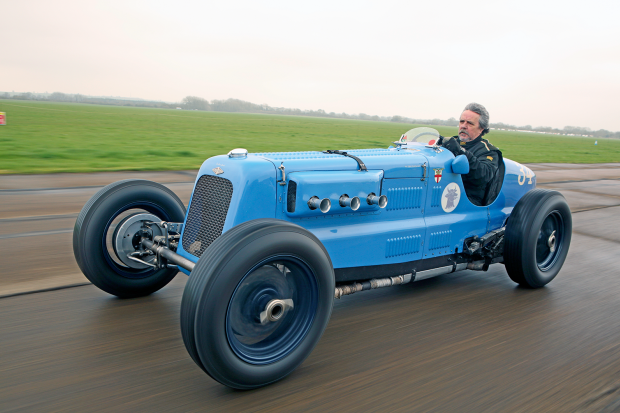 Another highlight will be the Norris Special: one of the most campaigned competition cars ever, with 153 outright or class wins from more than 450 starts.

Technically a 1934 Frazer Nash, it first appeared as a TT Replica, powered by a 1½-litre, overhead-cam Gough engine. It raced at Brooklands, Donington and the Isle of Man but never enjoyed much success in the pre-war years.

Post-war, though, it was a different story. In 1946 it was bought by Frank and John Norris, who promptly fitted it with a 3571cc straight-six meant for an Alvis Speed 25 – and so a legend was born. Over the next seven decades it passed through several owners but was always raced regularly, tasting success at such evocative venues as Shelsley Walsh, Goodwood and Silverstone.

Nor does it show any signs of slowing down: current owner Julian Grimwade, who acquired the car in 2014, has won both the VSCC Historic Race Championship and the Motor Sport Brooklands Trophy in it, despite being a relative newcomer.

If all of this piques your interest, then you'll want to check out our full feature on the Norris Special in the June issue of Classic & Sports Car magazine, on sale now and available to buy here. 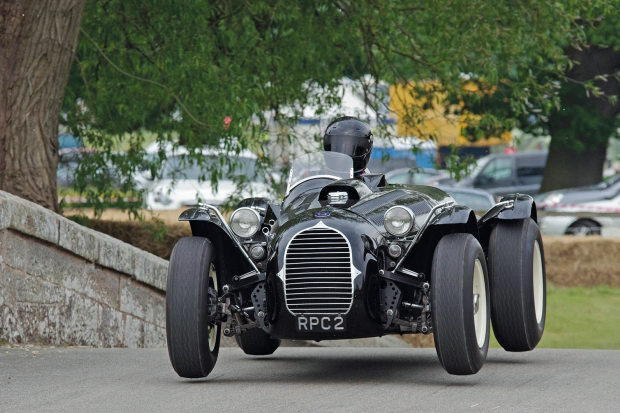 One of the three-car works team run in 1950 by Hersham & Walton Motors, it was raced that season by a 20-year-old Stirling Moss in his first-ever works drive.

In 1954 the car went to Hollywood to appear in the movie The Racers, in which it was driven by Kirk Douglas. It was then bought by Tom Carstens, who radically rebuilt it, fitting it with a Chevrolet V8 engine. Press reports at the time named the car the Stovebolt Special – and it’s still known as that today. 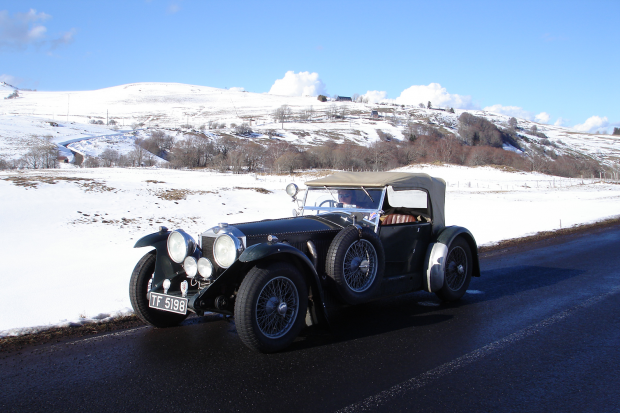 In a treat for Invicta fans, there will be a 1931 Invicta S Type low chassis that used to belong to the late Rivers Fletcher; legendary racing driver, film maker, journalist and author.

This motor car was driven by Rivers regularly at Brooklands and also featured in all of his books on motor racing.

Another rare car on display – and on the track – over the Show weekend will by one of the first 20 MGBs ever built.

Part of the first shipment of MGBs to the USA in 1962, it was then part of a team of three works-backed MGBs entered for the 1964 Sebring 12 Hour race. Driven by Jack Dalton and Ed Leslie, it finished 18th overall and was the first MG home.

The stunning 1957 Lotus Eleven due to take to the Bicester Heritage demonstration track was raced in 1961 against Jim Clark and Jackie Stewart and was one of a small number of Lotus Elevens that were converted in the early '60s to GT specification as well as being fitted with a 1220cc engine.

In 1964 it became Tony Dean’s first racing car; Tony had been successful in karts and it had been suggested to him to try racing a car. He came second at his first-ever event – a Northern BRSCC meeting at Rufforth. The car additionally raced that year at Brands Hatch, Cadwell Park, Mallory Park and Oulton Park. 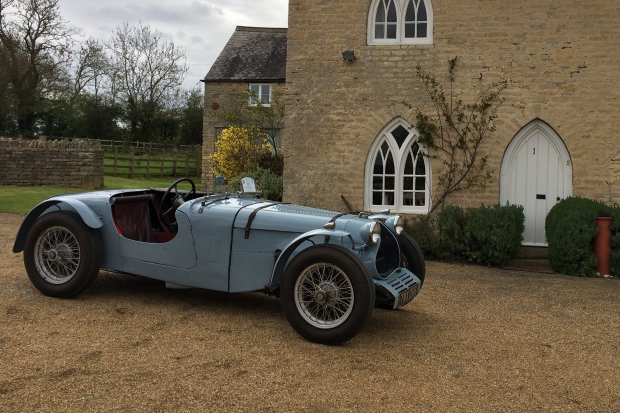 Intriguingly tying together the motorsport and wartime themes of the show, the Alvis/Marendaz Routledge Special was built in the early 1950s on an Alvis Firefly chassis that is believed to have been used to deliver secret documents during WW2.

Norman Routledge was an aero engineer, who had the chassis shortened and lightened. Every solid bit of metal was drilled to lose weight, and the car is affectionately known as ‘Tea Bag’ because of all the holes.

The body was made to Norman’s design from a derelict Marendaz Special 13/70. It was a highly appropriate combination – the Marendaz Special as a general model has an association with Alvis, as Captain Marendaz, a decorated WW1 Royal Flying Corps pilot, used to work for Alvis before setting up to build his own cars.

Fittingly in an event that also features spectacular vintage air displays, there will be two aero-engined ‘specials’ on the track.

The Fafnir Hall-Scott Special is styled on the Fafnir team cars of the early 1920s but has a floor-shaking, 10,000cc WW1 aero engine in place of the 2-litre supercharged unit that featured in the original cars.

The Menasco Pirate – the creation of Dr Robin Tuluie, a US motorcycle racing champion, Vehicle Technology Director at Bentley and formerly Chief Scientist and Head of R&D at Mercedes F1 Team – is powered by a 1929 Menasco Pirate airplane racing engine in a Riley 9 Monaco chassis with Rolls-Royce gearbox.

Finally, there is a record-setter – the 1935 Eccles Rapier Special, a supercharged, Lagonda-based single-seater.

Originally built for Roy Eccles specifically to race at Brooklands, this car can arguably lay claim to being the ultimate Rapier, being the only car to win on the Outer, Mountain and Campbell circuits at Brooklands.

Roy Eccles and his wife Marjorie both raced the car, which was a regular entrant at BARC, BRDC and JCC Brooklands events between 1935-1938. The Eccles Rapier Special also tested its mettle at Shelsley Walsh and other hillclimbs and has been regularly run for the last 40 or so years. 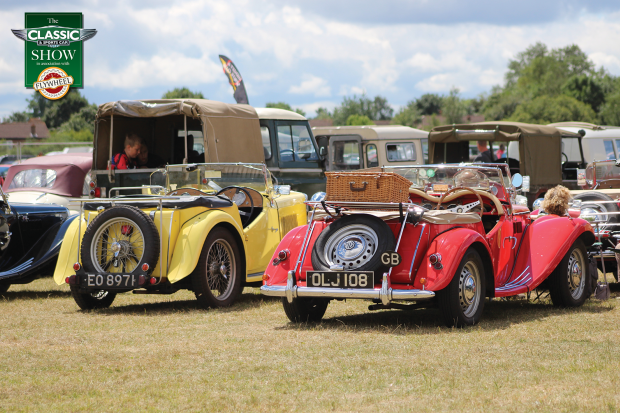 There'll be plenty more historic competition cars announced as we approach the Show on June 23-24, so look out for more info on this site, or the dedicated Classic & Sports Car Show in association with Flywheel website. We'll also post regular announcements on the Show's Twitter and Facebook pages.

VIP package upgrades, which include parking and hospitality, are also available.

For further information and to purchase Show tickets, visit www.classicandsportscarshow.com. And don't forget to buy the June issue of Classic & Sports Car magazine, which includes a special 19-page supplement about the Show. It's on sale now from all good newsagents and is also available to buy here.