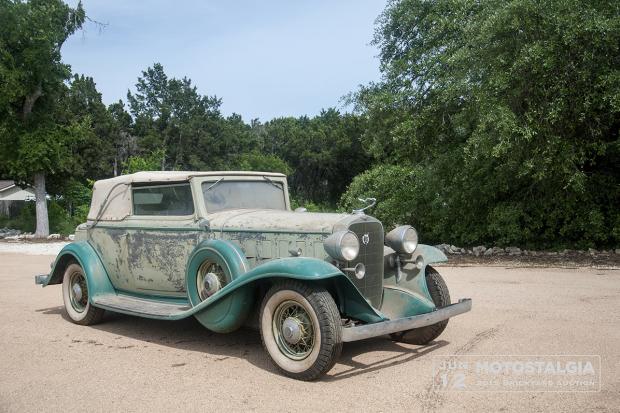 A collection of a vintage cars including a trio classic of multi-cylinder V16 and V12 Cadillacs, plus a vintage 1937 travel trailer, an interesting early century electric coupé and a brass era horseless carriage recently came to light in the Hill Country of Texas having not been seen in public for decades. How they came to be here is no mystery to “Jack”, the owner: he brought them there with the intention of keeping them on the road, but time, health and other interests got in the way and these magnificent automobiles were allowed to languish in forgotten slumber until 2015. This barnfind collection was found just outside the capital city of Austin and will soon be offered for sale without reserve at the Motostalgia Indianapolis Brickyard Auction on 12 June 2015.

No doubt that the star of this show is the 1932 one-of-a-kind Cadillac V12 Convertible Victoria, which is thought to be a V16 prototype of the model and quoted in the Sixteen Cylinder Motorcars. Considered one of the most handsome of body styles from the early 1930s, Cadillac realised that its main competitor, Packard, had scored a number of sales with its line-up of cars which included a Convertible Victoria. Under the direction of Harley Earl, vice president of design for General Motors, a standard production Town Coupe body was delivered to the Fleetwood styling studios and work was undertaken to convert it into an open, five-passenger Convertible Victoria. Assigned body #1 for this style, it was installed on the chassis of a V12 Cadillac and shown to a number of executives after which it was approved for production. However, in 1932 as the Depression tightened its grip on America, demand for luxury cars, such as Cadillac V16s and V12s was very limited. After the body style’s availability was announced, only one production 1932 V16 chassis was graced with the Convertible Victoria body, followed by just two more for the 1933 model year. This car remains the only V12 chassis to be fitted with this body.

From what Jack has been able to determine after years of research, Cadillac kept the car for a while before it was eventually given to an executive within the division. In the late 1930’s, shortly after a road trip to California from Michigan, the car was retired. The family purchased a new car and sold the V12. It was acquired by a dealer, held for a number of years and, in the late 1950s, sold to a collector who eventually did some cosmetic work in the 1960s. Jack acquired the car in the early 1970s, and when he moved to Texas brought the car with him, put it in storage and always hoped to get around to bringing it back to life.

A similar story follows another car in Jack’s collection, the 1938 Cadillac Series 90 V16 Fleetwood Limousine. Again, after doing research, he found that it was a specially ordered car with no jump seats, allowing for only two passengers in the spacious rear compartment. The original owner was Philip Knight Wrigley, heir to the Wrigley chewing gum fortune.

Also in the collection is a 1933 Cadillac V12 Town Coupe, a comfortable enclosed five-passenger sedan – the same body style that had lent itself to the creation of the Convertible Victoria. Like the other cars in the collection, it was running when parked over 40 years ago.

In addition to the trio of Cadilliacs, there are a couple of other cars that found their way to the collection. Jack and his wife had been living in Wisconsin when, for health concerns, they looked to the Hill Country and made their move south. Just before packing up and leaving he received a call from a local attorney who had two old cars taken in trade for his legal services. The duo consisted of a 1908 Reo Model Roadster with detachable tonneau and an alternative ‘turtle back’ rear deck, plus a very rare 1923 Milburn Electric Model 27L coupe. Both of these cars were purchased, transported to Texas and have been sitting in Jack’s barn ever since.

The final piece of the collection is a 1937 Kozy Coach travel trailer. Built in Kalamazoo, Michigan, it was bought by a farmer in Wisconsin to use for family outings. However, by the late 1960s, the farmer had only been able to get away once, so it was time to let it go. Jack couldn’t pass up a deal like this. When the move to Texas was made, the Kozy Coach was used for one night in which Jack and his wife slept in it. Like the cars, once it arrived in Texas it was locked away with the rest of his collection. This Kozy Coach was the camper of choice 75 years ago, but has only been used twice since new.

“These cars have been hiding long enough, time to let someone who can bring them back to life own them,” said Jack. “Part of the reason I moved to Texas was for my health – I stayed around for 40-plus years down here, always hoping to get these cars on the road.”

This entire collection will be offered to the public in June 2015 at the Motostalgia Brickyard Auction staged at the Indianapolis Motor Speedway in conjunction with the Sportscar Vintage Racing Association.

“We are really honoured to present this barnfind collection of Texas, which truly lets aficionados and interested bidders travel back in time,” said Antonio Brunet, chairman of Motostalgia. “These vehicles have been hidden away like a time capsule for many years. None of them has been seen for nearly five decades, and it is going to be very interesting to see the bidding excitement. Bidders have a chance to own very rare cars in even rarer of conditions, a true holy grail of early century automobiles stowed away in a Texas barn.”

For old Jack it will be tough letting go, but he is confident that the beauty and history of these vehicles will ensure a proper new custodian that will preserve them for generations to come.