How to… overhaul a propshaft on your classic car 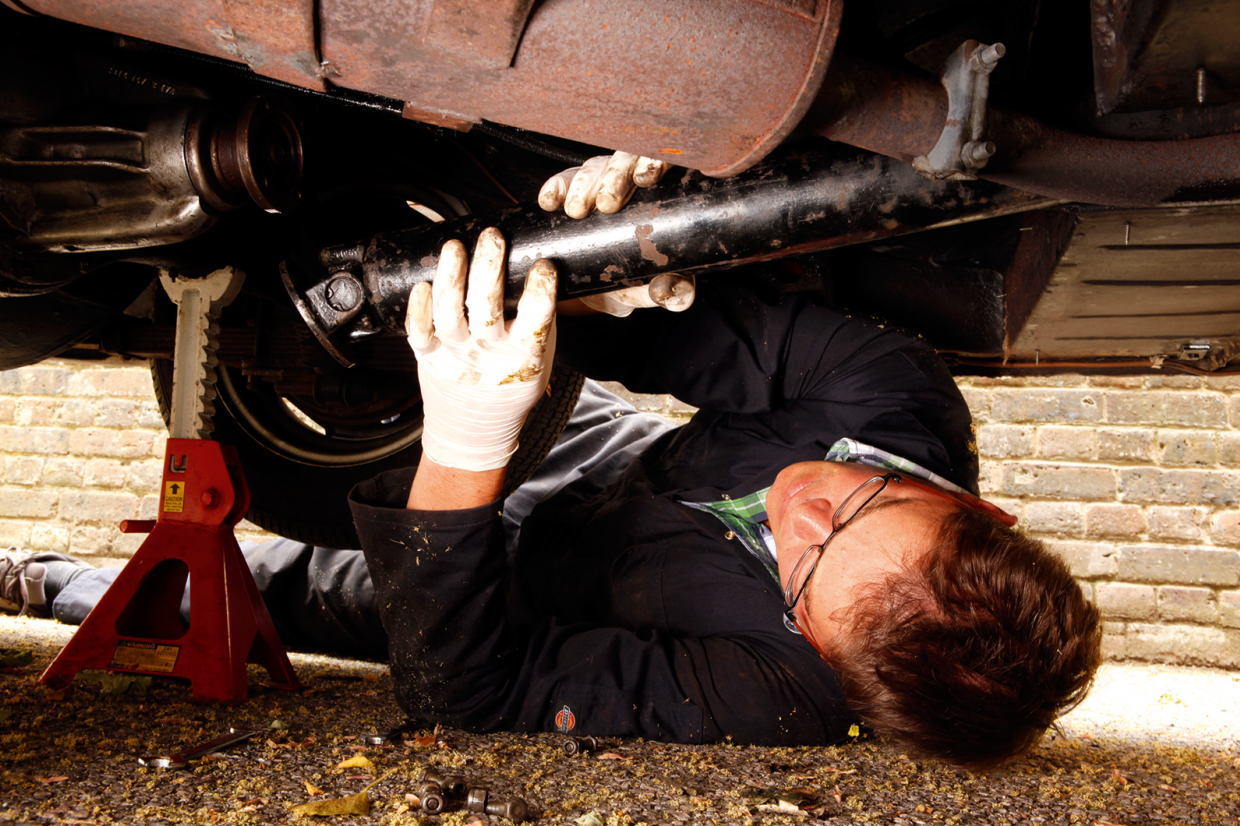 The propshaft plays a crucial role in transmitting crank rotations to the differential.

Most single-piece propshafts have two (Hooke, Cardan or Hardy-Spicer) universal joints – to allow them to rotate through a varying angle.

If your car has a live axle, then it’s doing exactly that as it accelerates and decelerates many times during a journey and the suspension moves, while being exposed to heat and dirt.

On a live axle, the prop often has a splined ‘female’ union between the yoke and the gearbox’s tailshaft. If so, you’ll need to drain the ’box oil first.

UJs are typically positioned at 90º to each other in the same plane to eliminate their inconsistent speed when operating at an angle, something that constant-velocity joints were developed to overcome.

Never clamp the prop on the tubular part: it’s easily distorted. Only the yoke, or the weld between the yoke and tube, is strong enough to withstand the jaws of a vice. 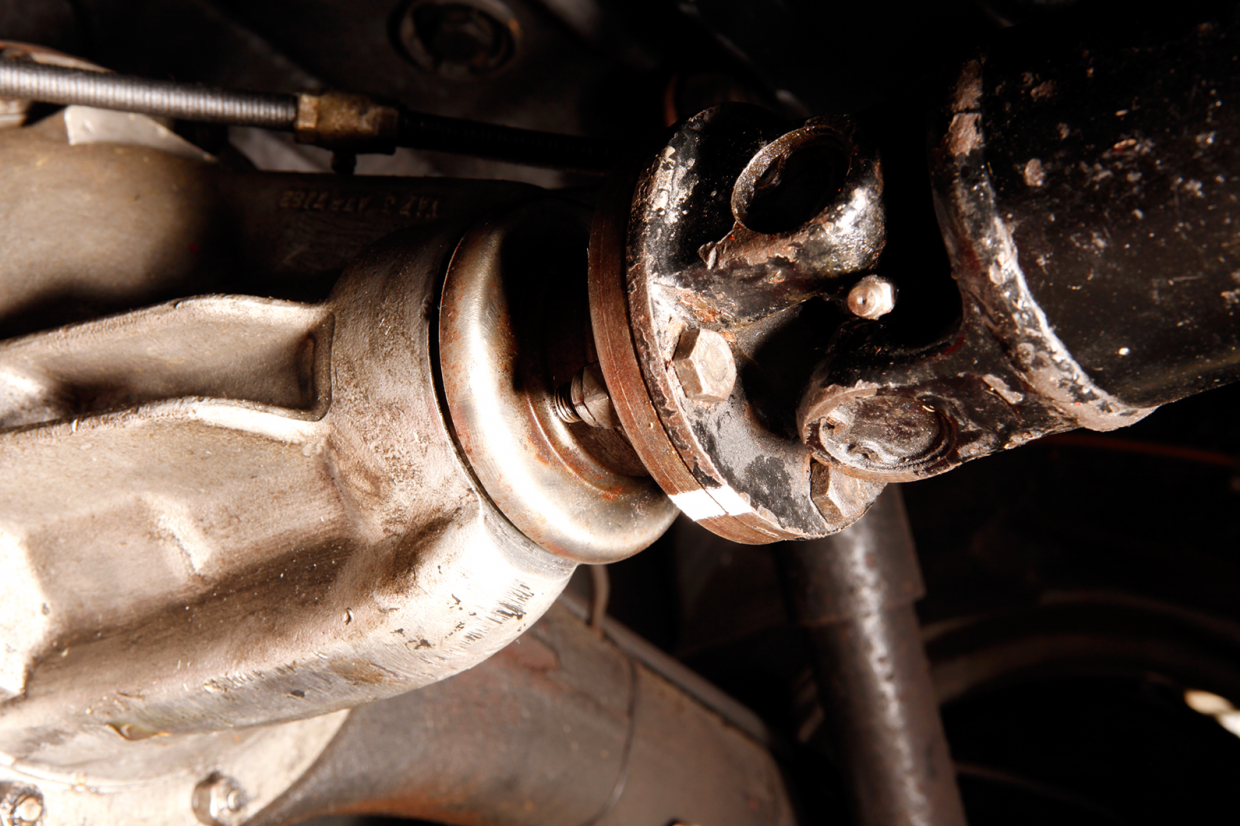 Prop flanges have a rectangular bolt pattern, so mark the position of the rear UJ relative to the pinion flange and each yoke relative to the shaft with paint – vital if you’re not having the prop balanced.

Unbolt the flange and carefully lower the prop while pulling it to release the yoke from the ’box tail housing. 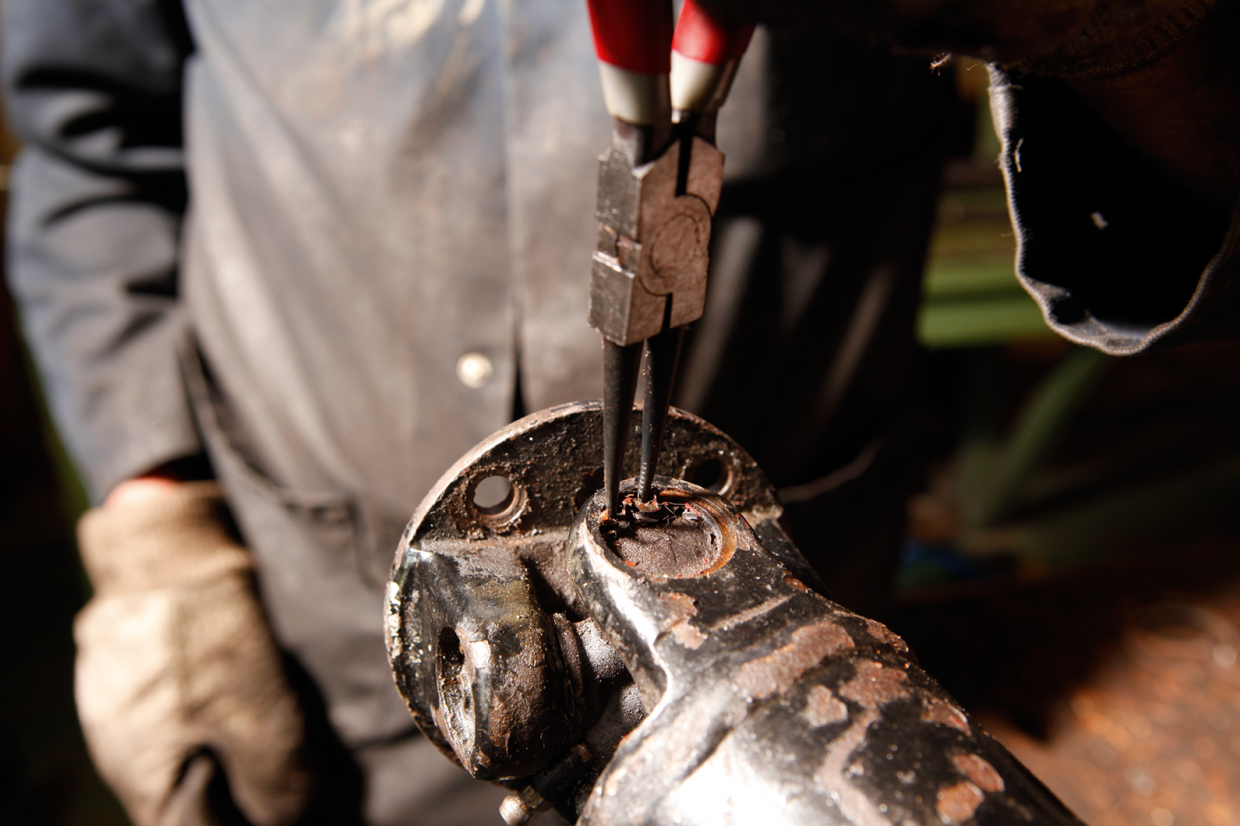 Put the yoke in a vice and use circlip pliers to remove them. Clean first.

If a clip is seized, tap the jaws of the pliers with a heavy tool to rotate the circlip. They can spring out, so protect your eyes.

Using a suitably sized socket, gently press a bearing cover on each axis of the cross-shaft to drive off the opposite cap.

3: PRISE OFF OTHER END 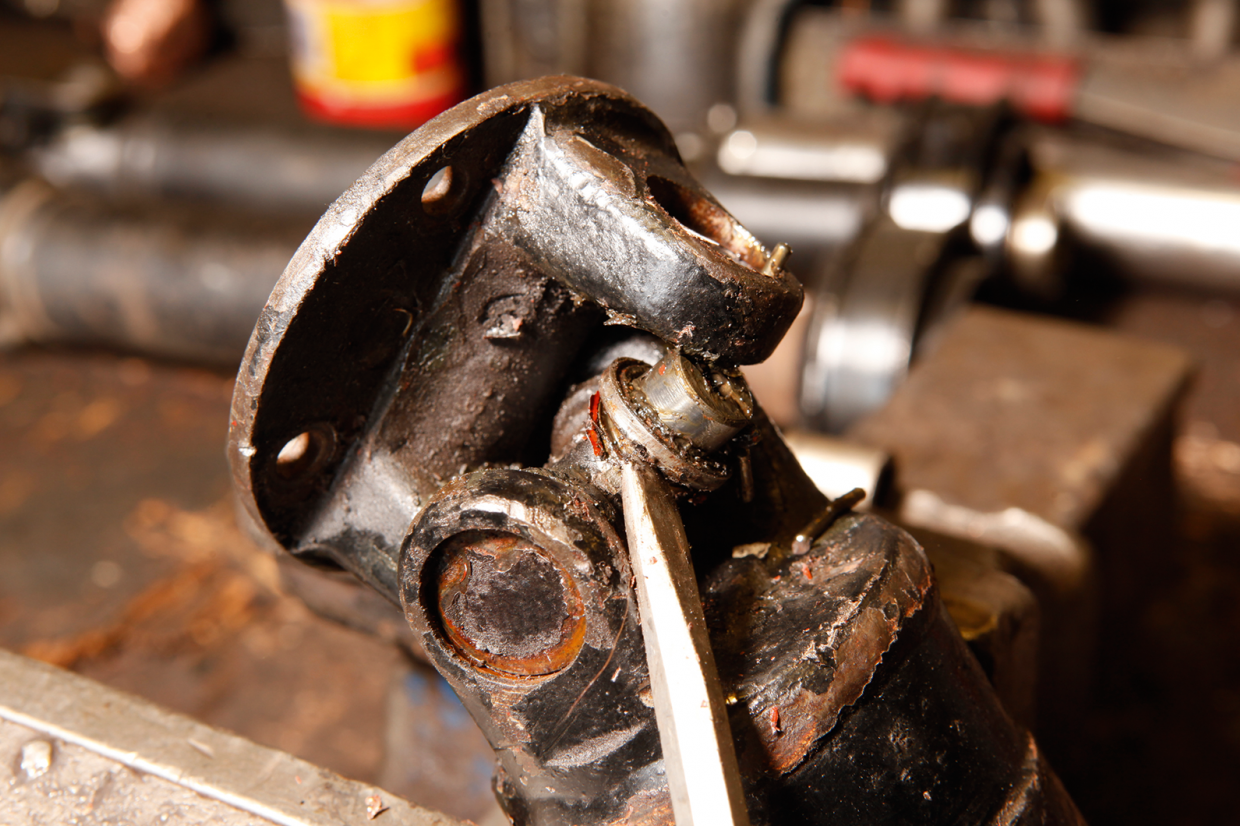 Tap the other side of the yoke with a copper mallet to push out the other cap.

Once it has budged, you may need to adjust the position of the cross-shaft end to locate against the cap edge before driving it again.

If the cross-shaft has a metal sealing ring, you’ll need to lever it with a screwdriver before it can come free. 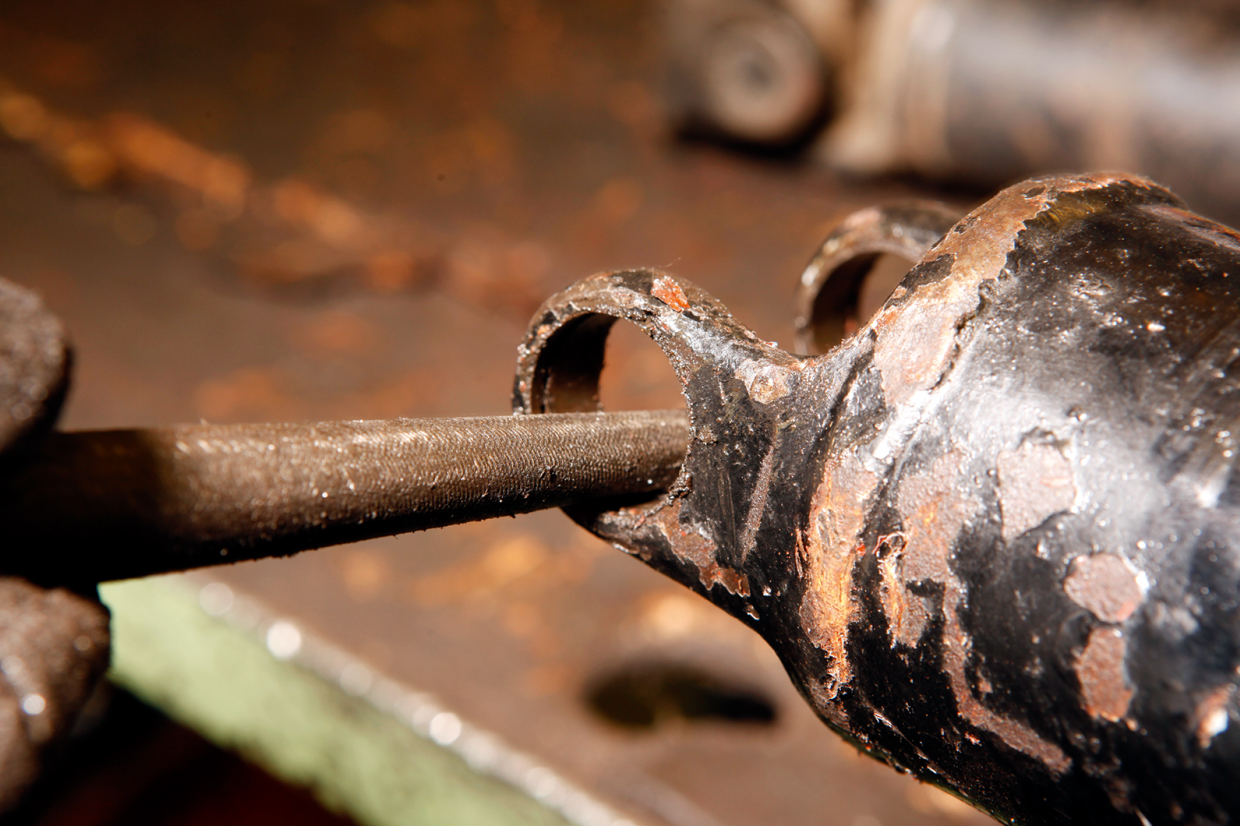 Degrease the yoke before cleaning the locating holes. A reamer is ideal but a round file will work as long as you don’t wear too much metal away.

If your UJ was worn enough for the needle rollers to have collapsed, the edges of the locating holes may be damaged. In that case, you will need a new yoke. 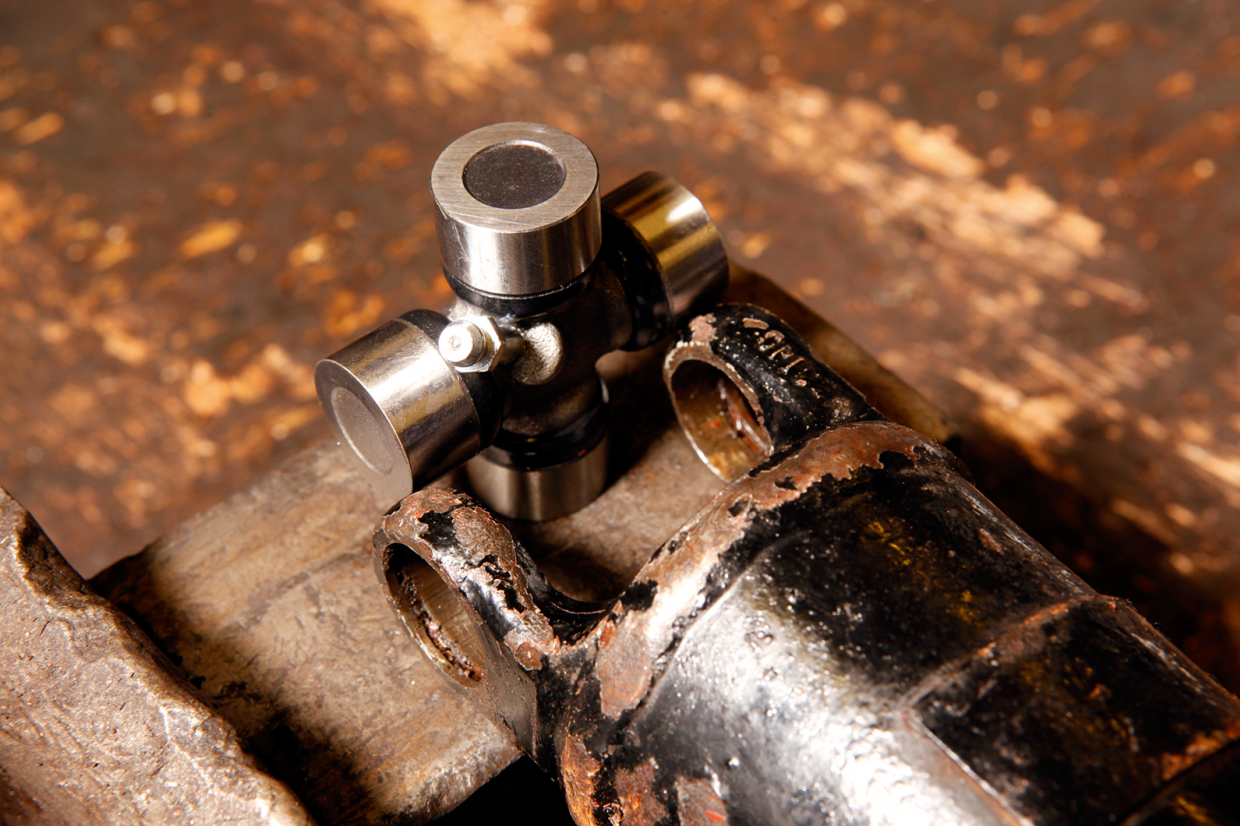 One side of each yoke end will have a slot to allow access to the grease nipple with a grease gun and to ensure that the yoke doesn’t shear the nipple off when it’s at an extreme angle.

Align the new universal joint accordingly and with the two yoke ends using the markings from step 1. 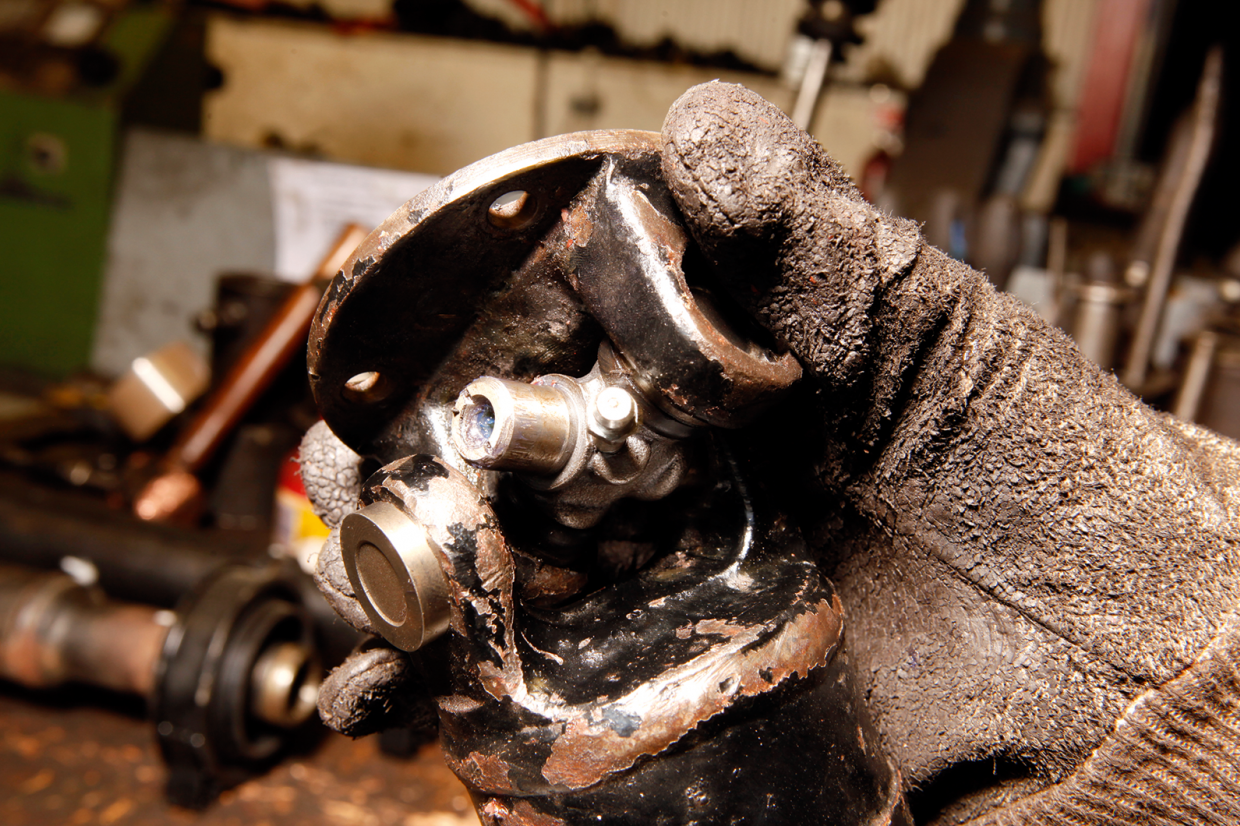 Take off the bearing caps and press one into the yoke using a socket and vice. Locate the cross-shaft in the yoke with an end in the cap and tap in the cap.

Once it is flush, do the other one. If the cap is skewed, won’t slot in or the shaft deflects, you may have nudged the bearings. Pull off the cap and adjust them.

7: PRESS IN AND SECURE 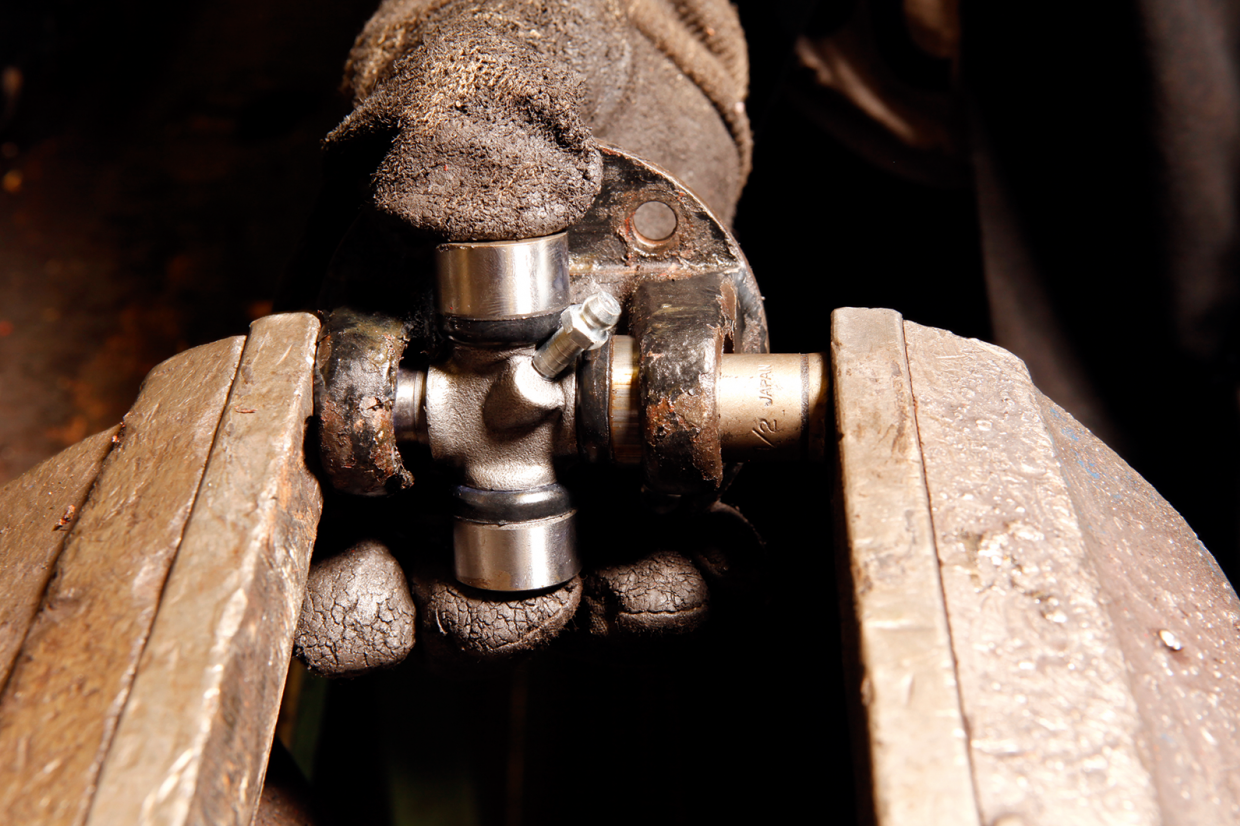 Repeat the previous step for the other axis of the cross-shaft then use a socket in the vice to press each side so that the circlip slot is just visible.

Use pliers to insert a new circlip at each end of the axis. If the clip is too tight to slot in the groove, use a file to thin it down. Wear safety glasses in case it dislodges. 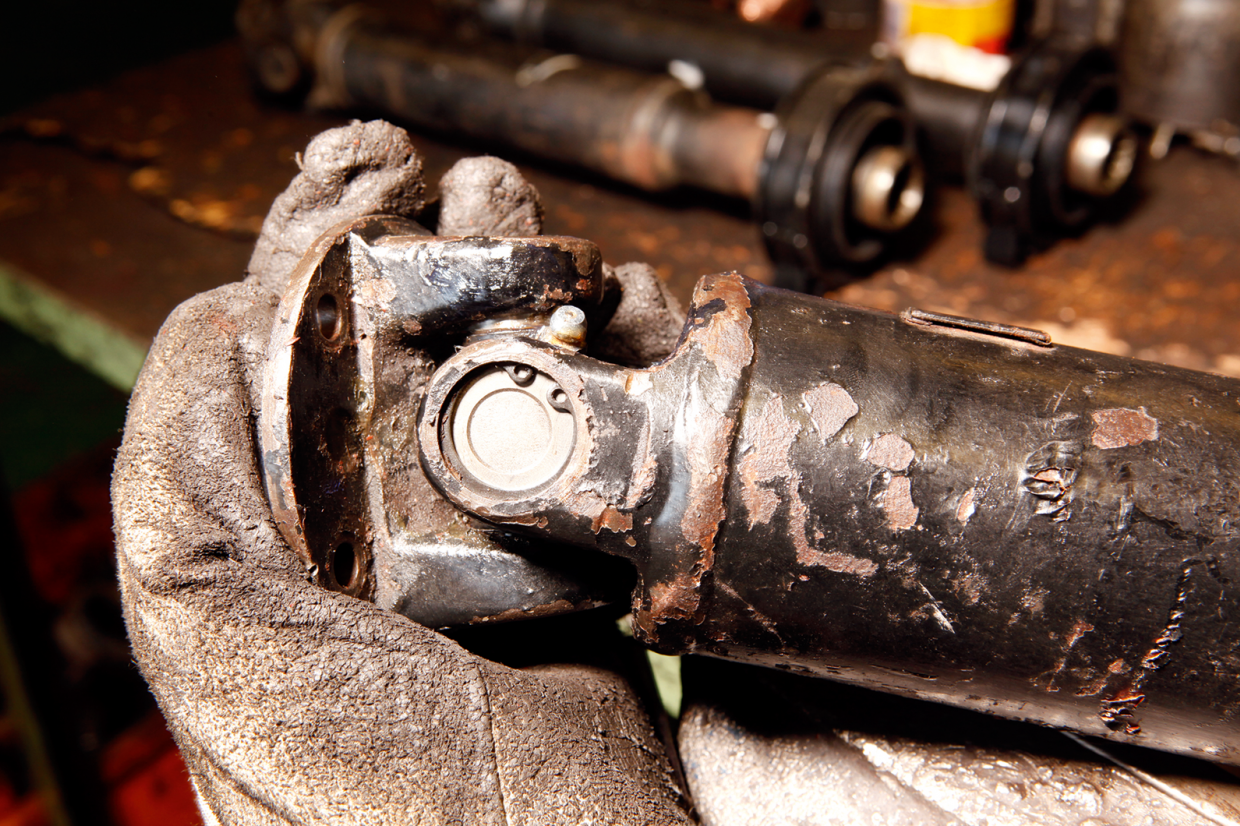 Check the UJ in both planes to ensure that it moves consistently. If it feels tight, gently tap the arms of the yoke with a copper mallet to ‘open’ it up.

If there’s any play between the yoke and the UJ’s cross-shaft, then a needle-roller bearing is out of place. Grease the joint before reinstalling the prop.

Thank you to Propshaft Services for assisting with this article

Check out all our ‘How to…’ guides here

How to… prepare for a breakdown

How to… rustproof your classic car