Lunar rover: the story of the most expensive car ever 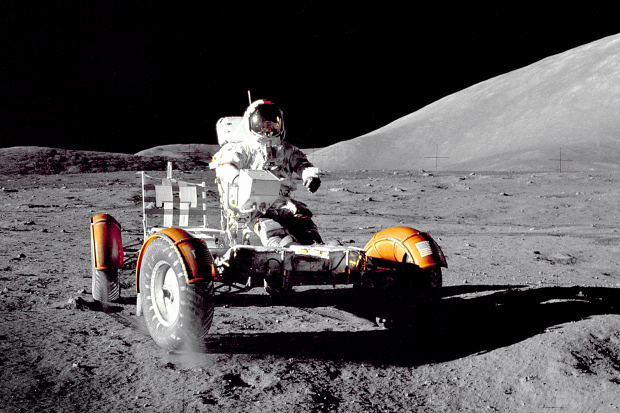 And therein lies the snag. If you fancy the ultimate off-roader, and can’t persuade NASA to part with the Lunar Rover in its museum, then you’ll have to travel to the moon to grab one of the three that were left behind when the astronauts returned home.

Much has been written about the 1960s, but perhaps the most resonant description came in Andrew Smith’s Moondust, a record of the Apollo programme. He describes it as ‘like a decade plucked from the 21st century and dragged by sheer force of presidential will into the 20th’. 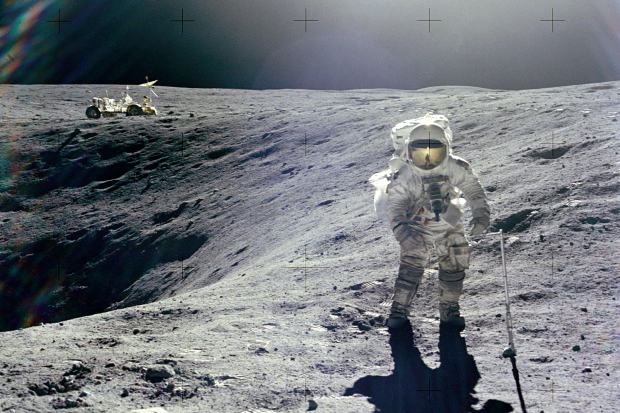 It’s a bold claim, but it was certainly a heady time, fuelled by a potent mix of vaulting ambition and unbridled creativity, with 1969 the exhilarating climax. Concorde and the Boeing 747 took to the air for the first time, the launch of the Datsun 240Z fired a warning shot across the bows of the world’s car industry, the first two Led Zeppelin albums were released and Monty Python’s Flying Circus performed the ‘Dead Parrot’ sketch.

But when the riff of Heartbreaker or the genius of Cleese and Palin are long forgotten, and the internal combustion engine is no more, the memory of Neil Armstrong’s first steps on to the surface of the moon – nearly 50 years ago, on 20 July 1969 – will remain.

And if it wasn’t enough simply to walk on another world, then how about taking a drive? That breakthrough wouldn’t happen until Apollo 15 touched down on the lunar surface a little over two years later, but the story of the Lunar Roving Vehicles reveals the same remarkable spirit of invention that defined the entire Apollo programme. 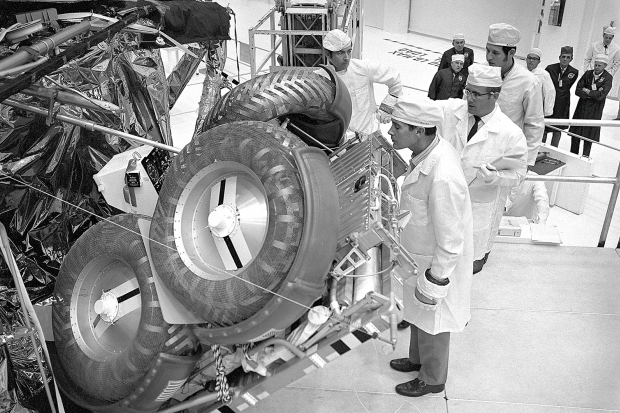 In 1961, when president Kennedy committed America to sending a man to the moon he didn’t mention taking a car. Others, however, including NASA chief rocket designer Wernher Von Braun, were not going to let that hold them back.

Captured from the Germans at the end of WW2, Von Braun, the creator of Hitler’s V2 rockets, became the driving force of Apollo. For him, the moon was more than just a target, it was a world to be explored – and that could not be achieved if astronauts were restricted to walking. ‘One small step for man’ was a start, but Von Braun dreamed of one great drive for mankind.

The original proposal was ambitious: not a lightweight buggy, more a super-sized VW Camper large enough for two astronauts to roam across the lunar surface for several days. At around three tons, however, the vehicle would be so heavy that the only way to deliver it would be to send it on ahead via its own rocket launcher – an option that even NASA baulked at as being too expensive.

Yet the idea of exploring the moon on four wheels was not abandoned. A two-seater buggy was proposed by Sam Romano and Ferenc Pavlics of General Motors Defense Research Laboratories, but it would not be an easy design job. 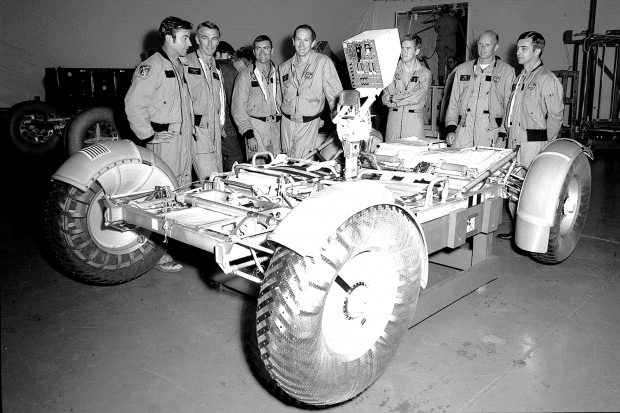 In the race to get to the moon, the development of a Lunar Rover had been put on the back-burner: by that stage it was May 1969, the Apollo programme was well advanced, and there was little room to store a 10ft-long buggy in the Lunar Module. The best remaining option was a wedge-shaped space of about five-feet square, little bigger than the boot of a large car.

Pavlics was not to be defeated, and came up with the elegant solution of a folding car. To prove the idea, Romano created a scale model, his wife making the fabric seats and his seven-year-old son donating his GI Joe – Action Man’s US cousin – as astronaut.

This 1ft-long prototype looked like a stripped-down origami beach buggy. Preparation for transit began with folding the seats flat, then the rear of the chassis was lifted over and the back wheels tucked in, before the front could be folded and the front wheels stowed. Needless to say, this would make a conventional transmission difficult to engineer.

Building a model was one thing, building the Lunar Roving Vehicle for real was quite another. This car needed to survive the intense vibration of a Saturn V launch, be unfolded by a man in a spacesuit, then operate in a near-vacuum. And the weight restrictions would make an F1 designer sweat: every 10lb cost a second in hover time, so the target was 400lb (in Earth gravity). 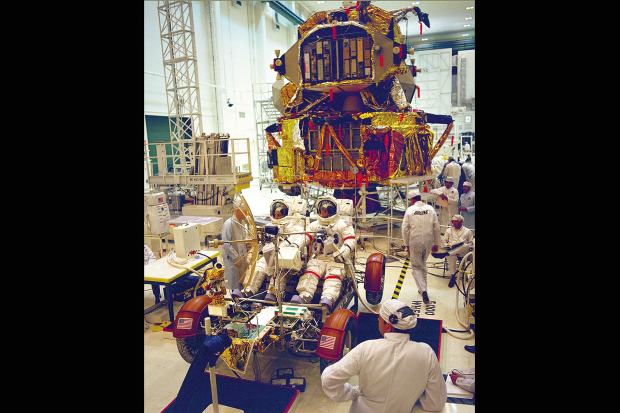 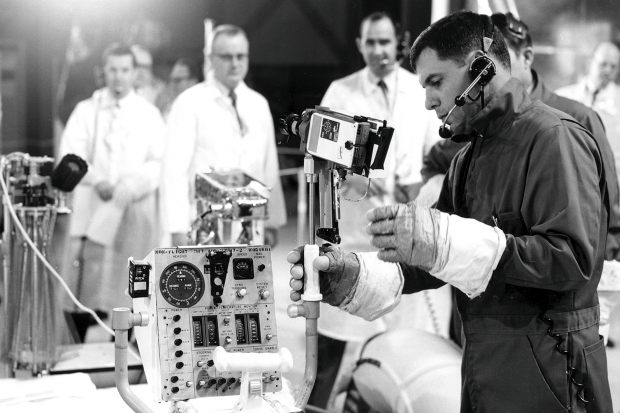 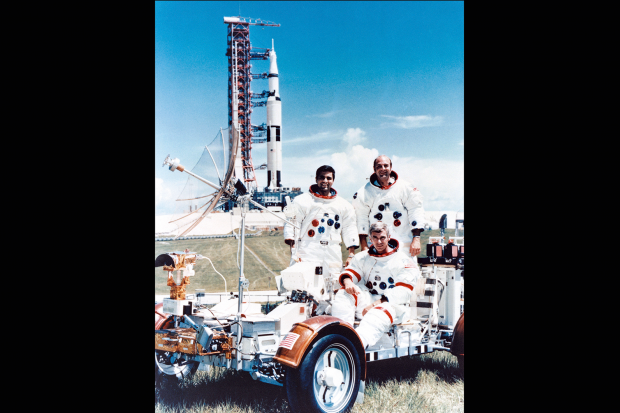 The LRV was powered by 0.25hp electric motors sealed into each wheel hub and boasted four-wheel steering controlled not by a wheel but a T-bar located between the two seats.

It was an intuitive system: you pushed the stick forwards to go straight ahead, pulling it left and right turned the vehicle, and yanking backwards applied the brakes. Tugging the handle all the way back put on the ‘handbrake’, while to reverse you flicked a switch before pulling the stick.

Laid out in front of the T-bar was the dashboard, which indicated speed, heading, pitch, power and temperature. The LRV could be steered from either seat, though the mission commander, occupying the left-hand side, usually drove.

Of all the design challenges, the wheels were the most demanding. Rubber could fail in the harsh terrain and extremes of temperature, so hand-woven galvanised steel mesh ‘tyres’ were created. The hope was that the mesh would grip the surface, reducing potential understeer resulting from one-sixth gravity, while at the same time throwing off the ‘sticky’ moon dust. 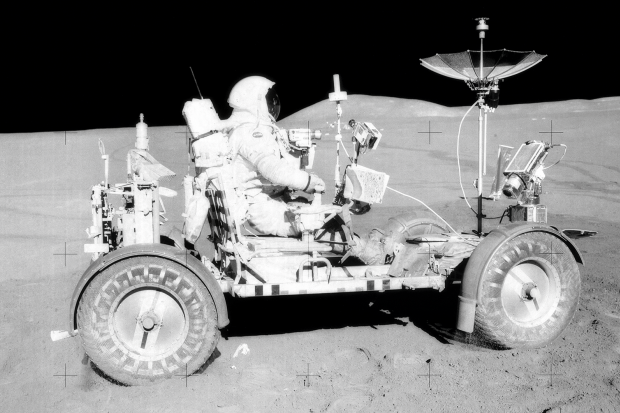 Clearly the LRV was not going to be cheap. The original contract, awarded to Boeing and Delco, was for $19m and demanded delivery of the first vehicle by 1 April 1971, but the final bill came closer to $38m. For that, NASA got four Rovers, one each for Apollos 15, 16 and 17 plus a spare.

In addition to the four LRVs, several training and testing versions were built including a static model for ergonomics, an engineering unit, two one-sixth gravity models to test the unfolding mechanism and a 1g trainer to give the astronauts experience of driving the LRV across surfaces on Earth that matched the lunar landscape. One car was delicately counterbalanced, like a puppet on strings, to give the sensation of low-gravity handling characteristics.

The team worked around the clock and in March 1971 the first LRV was delivered, after just 17 months’ development. On 31 July, Apollo 15 commander Dave Scott stepped on to the lunar surface at the foot of the spectacular Montes Apenninus. He was the seventh man to walk on the moon, but the first to drive. 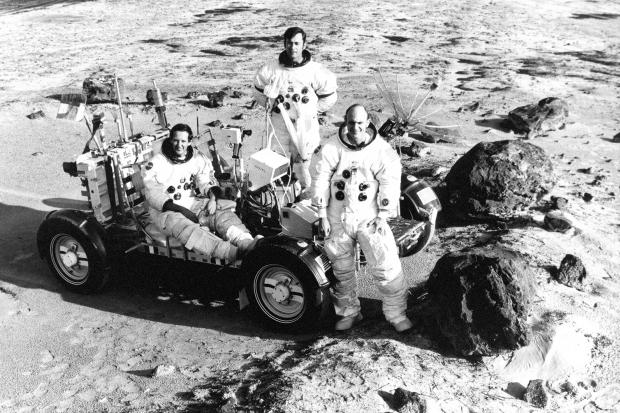 As the Apollo team unfolded the LRV, on Earth the car’s creators were tense. Had their vehicle made the quarter-million-mile journey intact? Would the training pay off? One astronaut climbed the ladder on the Lunar Module to release the Rover, then it was eased out by the second man on the ground. Via an ingenious system of pulleys, ropes and tapes, the vehicle began to take shape. From the blurred television images, it looked as if the Lunar Module was giving birth.

Finally, the LRV was ready for a test drive, but a systems check revealed a problem: the front steering had failed. Undaunted, Dave Scott and Jim Irwin set off on the greatest sightseeing trip in human history. They spent more than 18 hours exploring the Hadley plains in the Mare Imbrium, a giant crater of more than 650 miles wide.

Because there is no magnetic field on the moon, a compass would be useless so they navigated using a guidance system that monitored their position via a gyro and an odometer. The information was fed into a computer that tracked distance and direction back to the Module.

As back-up, they could also fix their location using the Sun, but they need not have feared getting lost – they could simply follow their tracks. With no wind or rain on the moon, the tyre tracks are still there now – and will be for millennia. 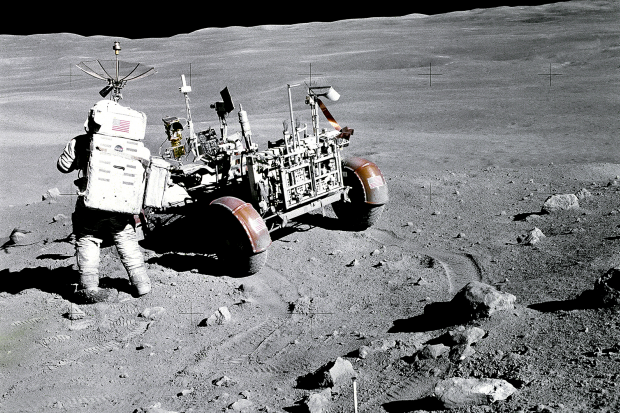 Getting lost might not have been a huge problem, but breaking down or having an accident could be. Although the LRVs were the only vehicles on the moon, lunar maps of the time were only accurate to a resolution of around 45ft so a 30ft crater could be there to surprise them. Also, judging the distance to and size of obstacles in this alien terrain could be difficult.

Fortunately there were no catastrophes, but that’s not to say everything went perfectly. The mudguards were easily damaged, plus dust thrown up from the wheels would quickly cover the crew and communications equipment. Also, handling in one-sixth gravity was tricky: Charles Duke Jr, Apollo 16’s Lunar Module Pilot, reported a 180˚ spin. Safety on an alien world is a serious business so the operational area for the LRV was restricted to the ‘Walkback Limit’ – the distance from which astronauts could return to the Module on foot.

As a further precaution, astronauts would drive to the furthest point from the Module then work their way back, thereby reducing the distance to safety as their life-support systems diminished. NASA engineers soon developed more confidence in the buggies and the spacesuits, however, and the limit was relaxed.

For the Apollo 17 mission, the LRV was permitted to travel up to 4½ miles from the Module. Each LRV was used for three trips – one per day – and together they carried the astronauts across 56 miles of terrain, returning with more than half a ton of rock to vastly improve our understanding of lunar geology. 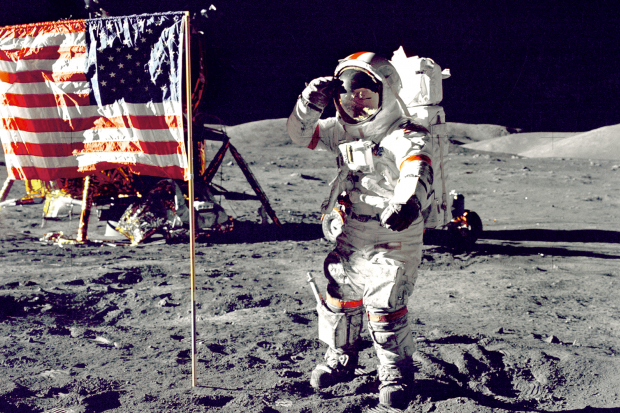 Eugene Cernan salutes the US flag

That some still refuse to believe in the lunar landings confirms just how mind-boggling the Apollo programme was, and the LRV was its most sensational creation.

Its cameras allowed Earth-bound spectators to ride across the lunar surface, yet now the rarest, most valuable cars ever produced lie abandoned on another world.

There are plenty of reasons to be cynical about Apollo. It was the Cold War fought in space, its roots lay in Nazi Germany and it cost a fortune with comparatively little return, but for a short while men believed anything was possible, and that should be celebrated.

Astronomer Patrick Moore stated that it was “the greatest technological triumph ever made by man”. Fifty years on, many would argue that it still is.

How the motorway changed Britain

Vive la difference! The evolution of the big Citroën