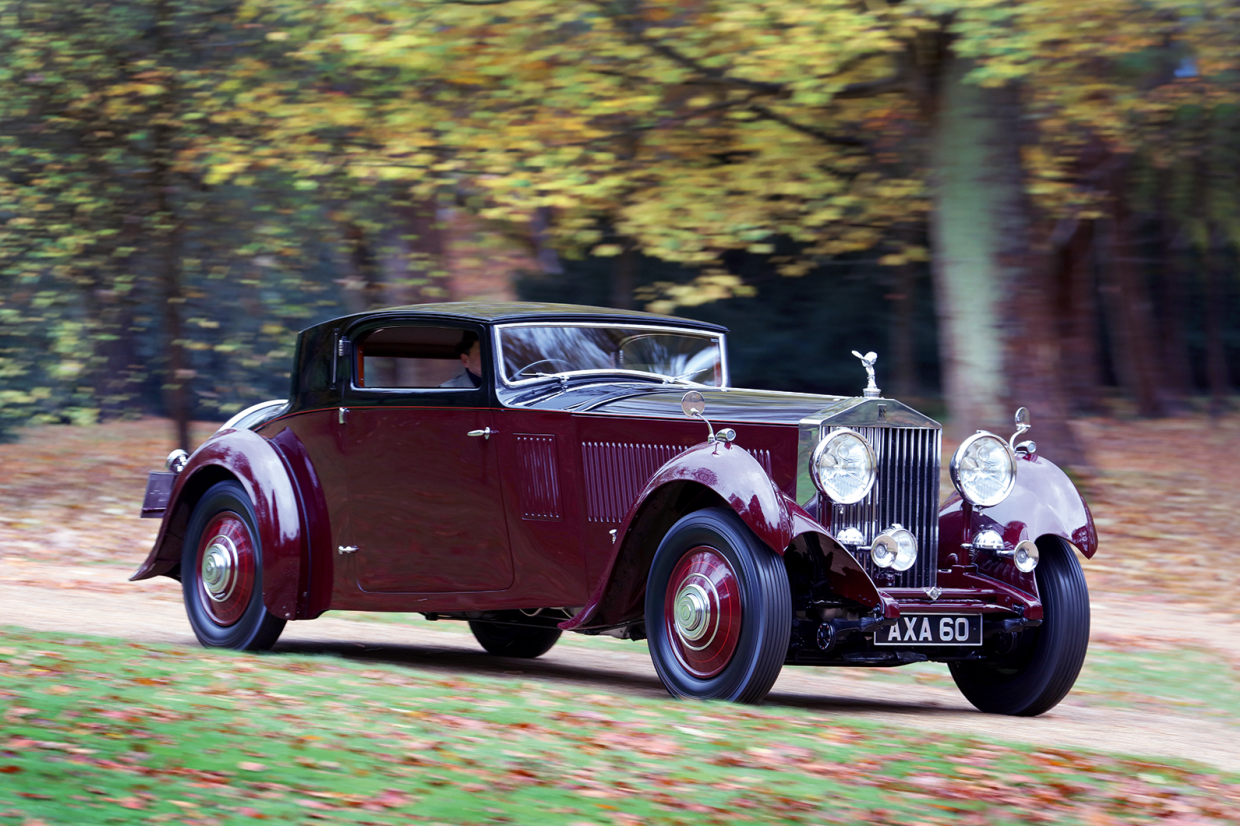 Every automotive enthusiast has had one of those moments when you suddenly see a car that totally captivates you.

Be it in a city or on the open road, you find yourself chasing it just to get a better look or, if lucky, even chat to the owner.

The seductive razor-edge form of the unique Rolls-Royce Phantom II Continental ‘42PY’ had that effect on two motorists who were so smitten by its style that they chased and flagged down the driver in an attempt to purchase the car. 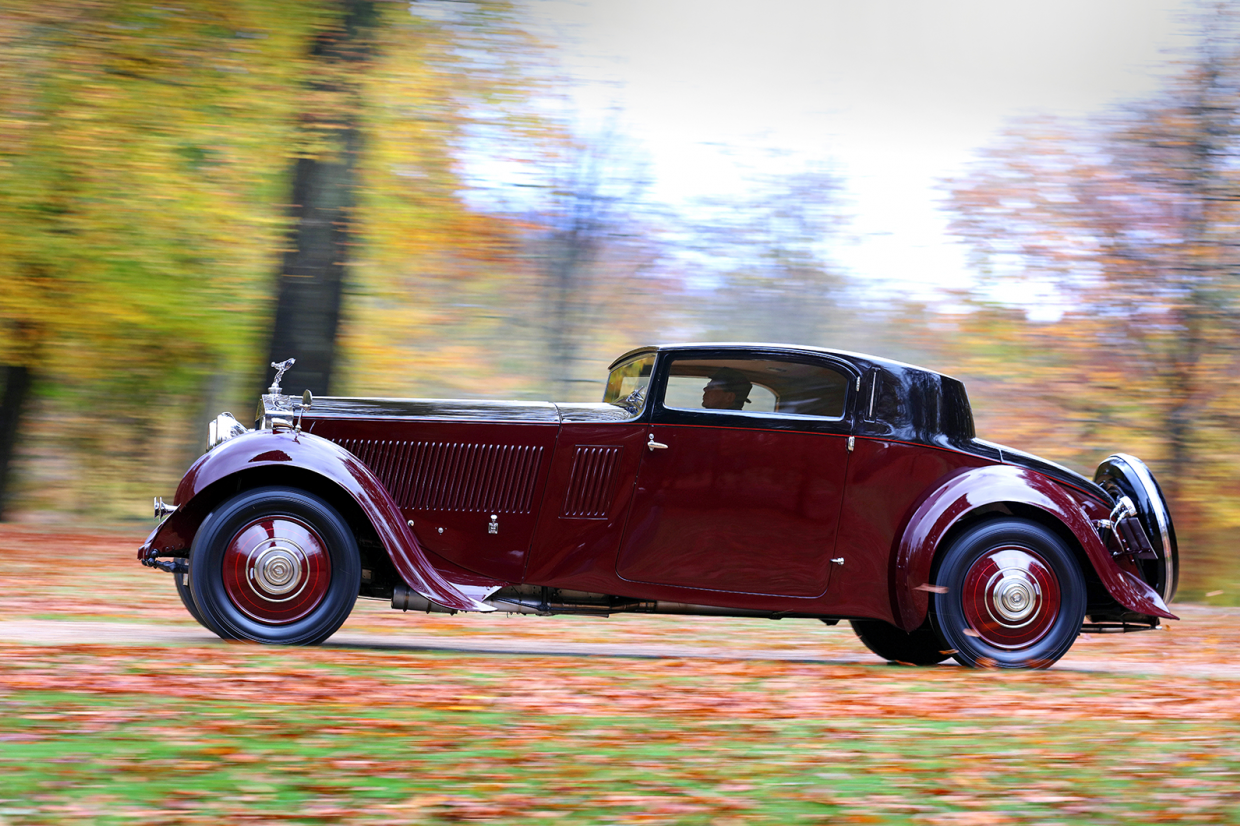 The first occasion came in 1952. Anthony Gibbs, author of A Passion for Cars, was having a tough day.

Due to a lengthy printer’s strike, his firm had gone bankrupt and, as he motored home across London, his mind was elsewhere trying to resolve his business problems.

In an instant, Gibbs was distracted by the car ahead. Registered AXA 60, this sleek coupé featured sporty details including separate helmet-style wings with no running boards, and a low roofline.

“I realised that, without seeing it, I had been travelling behind the most beautiful car I had ever seen,” he later recalled. “It was a big black Rolls, shaped very much as my old Delage, but more beautiful still, because, instead of being a drophead, it had a marvellously square-cut top like a brougham.”

After following the Royce for a few miles, Gibbs eventually attracted the attention of the driver and finally, at a crossroads, after jumping out of his car, he managed to convince the alarmed stranger to pull over.

Such was Gibbs’ seduction by the Phantom II that he struck a deal on the spot to buy the remarkable conveyance. 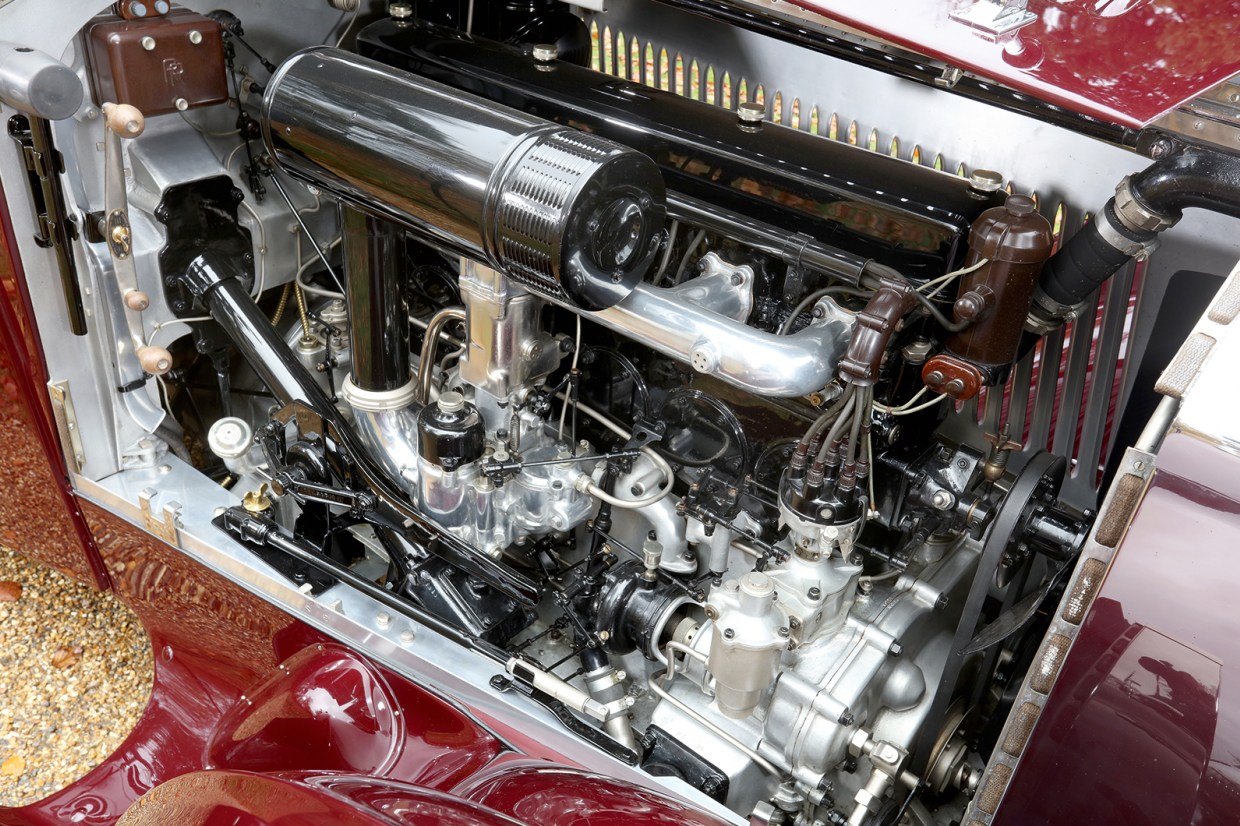 The spectacular car always attracted attention, but on one occasion it was not the interest that he expected.

While regally motoring through London, Gibbs became aware that he was being followed by several police vehicles. The surveillance was due to the suspicion that he was in league with Communist sympathisers.

Five cars – two marked, and three unmarked – continued the pursuit, and Gibbs decided to lead them on a convoluted wild goose chase through the capital’s back streets as if in a film thriller, but at a sedate 10mph.

Painted black with its low roof looking like a trilby pulled down over a dubious figure’s forehead, the Rolls-Royce coupé – with Wolseley 6/80s on its tail – conjures a vivid image straight out of a Terence Fisher thriller. 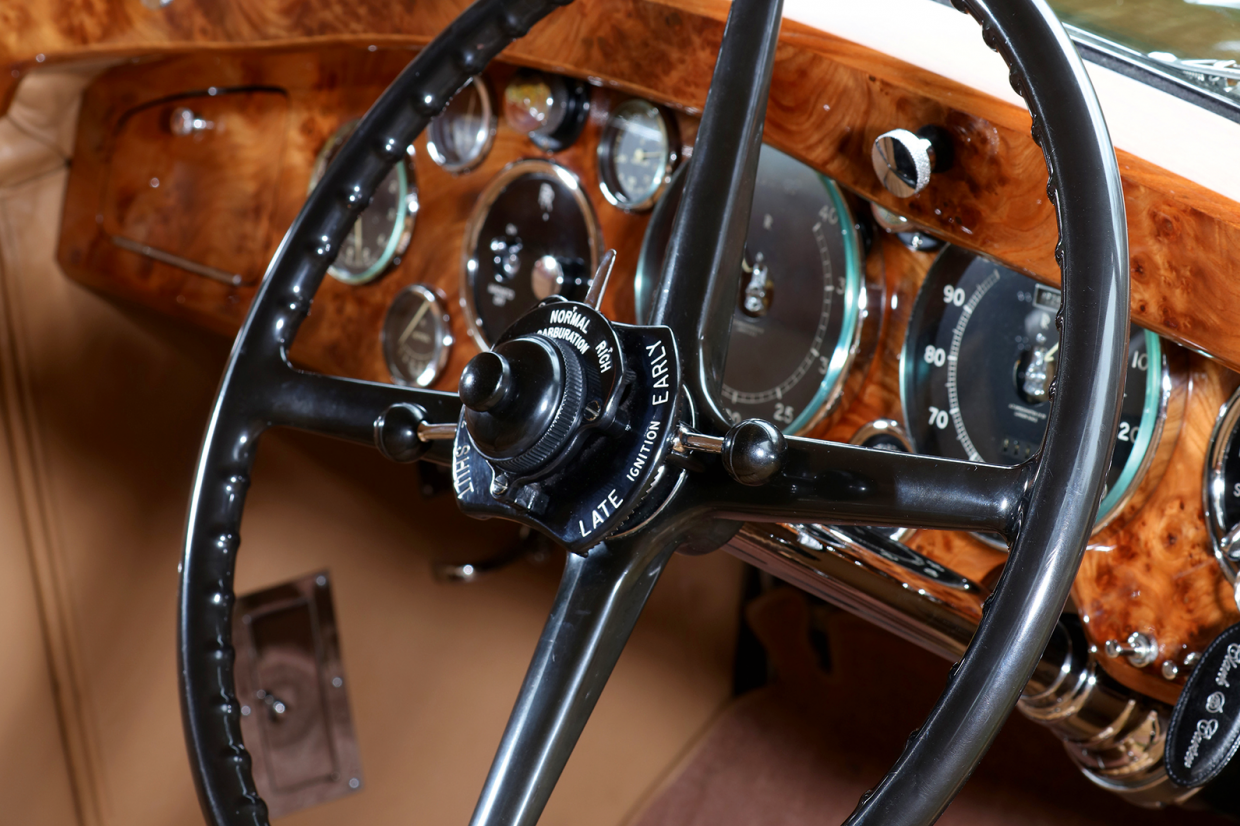 Gibbs drove the Continental all over Europe in the manner for which it was conceived, but on a family holiday to Switzerland in ’57, the Rolls-Royce suffered mechanical problems after a trip over Alpine passes.

He struggled to get spares, so he decided that it was time to sell 42PY and, bizarrely, later while driving through London, he too was waved down by a following motorist.

The admirer was one Arthur W Seidenschwartz, an American from Waukesha, Wisconsin, who was as determined to buy the Phantom II as Gibbs had been five years earlier.

A deal was done for just $300, and the one-off fixed-head coupé headed across the Atlantic to the US, where Seidenschwartz kept it for 35 years.

In the States, 42PY captivated enthusiasts whenever it appeared at events or featured in the R-R club’s magazine The Flying Lady.

The unmistakable Continental was christened the ‘Robert Hall’ because its upper profile evoked the modernist single-storey chain of clothes stores. 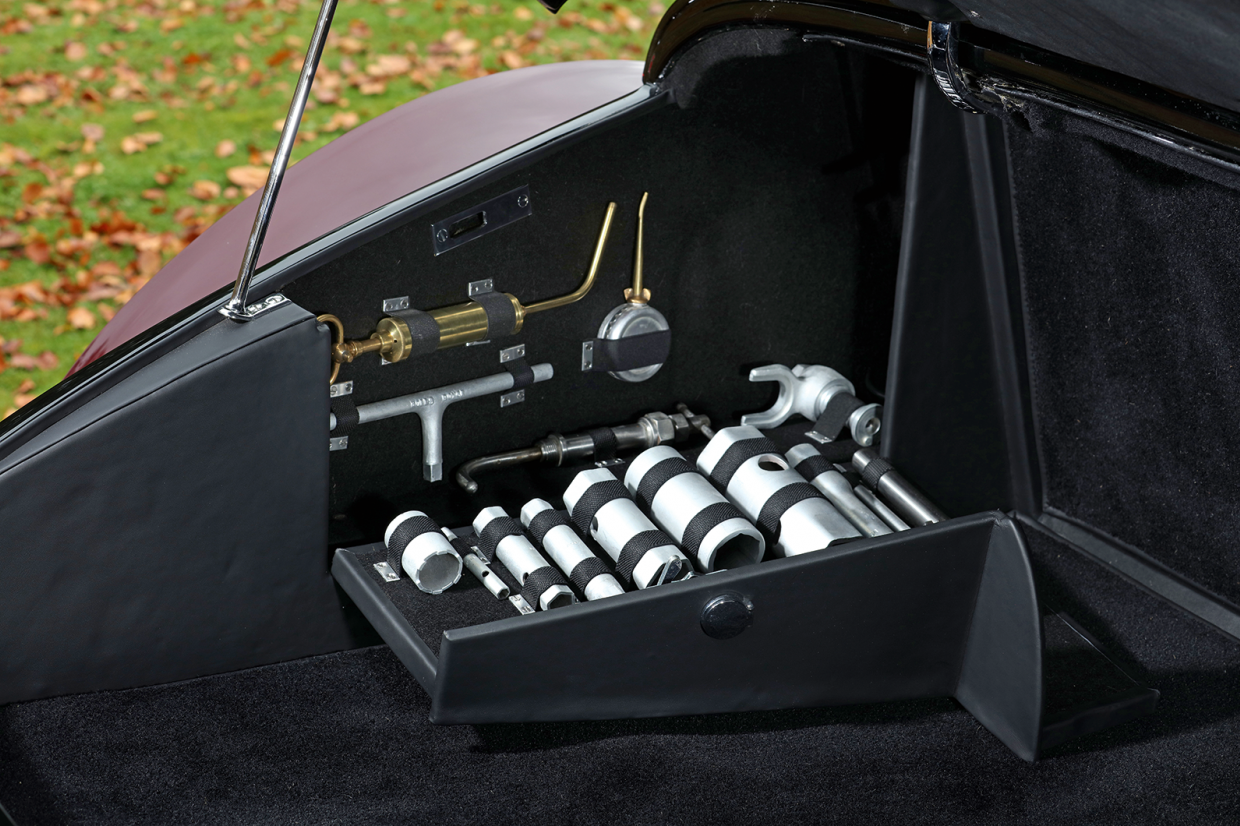 There’s a toolbox fitted into the Rolls-Royce’s boot

I’ve always loved long, lean coachbuilt cars with low rooflines, and for me this exotic Freestone and Webb design is the ultimate of the exclusive 281 short-wheelbase Continentals produced from 1929-’35.

My scrapbooks are full of sketches of fantasy ‘chopped’ pre-war saloons and coupés, but 42PY was just perfect as it came out of the Willesden works in 1933.

The north-west London firm was founded by VE Freestone and AJ Webb in Brentfield Road, Stonebridge Park, and quickly developed a reputation for elegant bodies, first with a Weymann licence, and then with its own designs.

Freestone had learnt his craft at Crossley, while Webb no doubt brought flair to the drawing office after training in France.

The company’s signature style developed with separate wings, doorstep and a shallow windscreen that created a distinctive look exemplified by various Bentley 8 Litres, none more so than chassis YF5021. 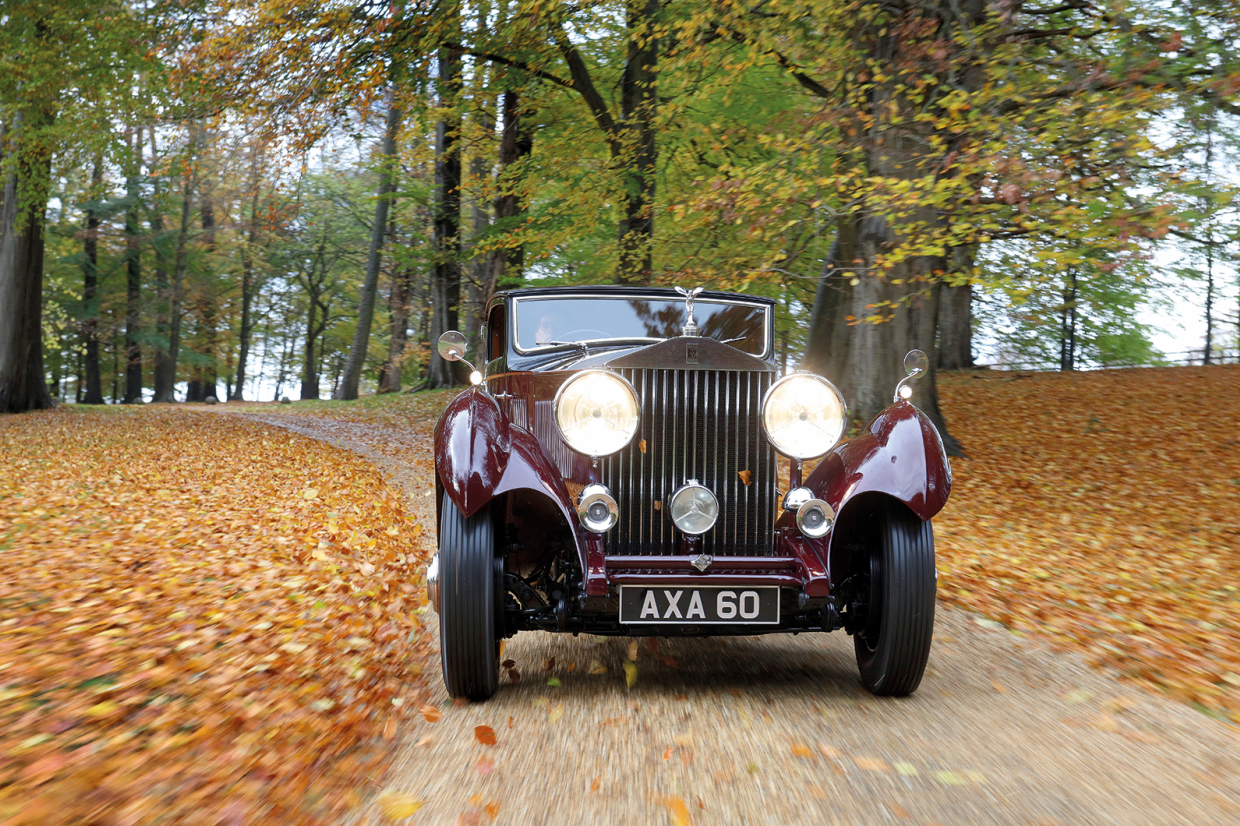 Any order to construct a body for a Royce was prestigious, and Sir John Leigh was Freestone and Webb’s most loyal customer.

After making his fortune in the Lancashire cotton industry, Leigh became the first Baronet of Altrincham.

In 1921, the moustachioed millionaire (rumours estimated his huge wealth at £14million) purchased the Pall Mall Gazette (later amalgamated with the Evening Standard), and a year after that he was elected a Conservative Member of Parliament for Wandsworth, a seat Leigh held until retiring from politics in 1945.

The luxurious new model from the Derby works perfectly suited Leigh’s style and, much like a favourite tailor, his coachbuilder of choice was Freestone and Webb.

The Baronet had great taste in cars, as his first Phantom II Continental order underlines.

The second chassis, 6GX, was a two-door Freestone and Webb drophead coupé fitted with twin spares on the back, and a high-output dynamo for night driving. The elegant car was badly damaged in a fire in ’32, and was rebodied for Leigh’s son with fine open tourer coachwork by Carlton. 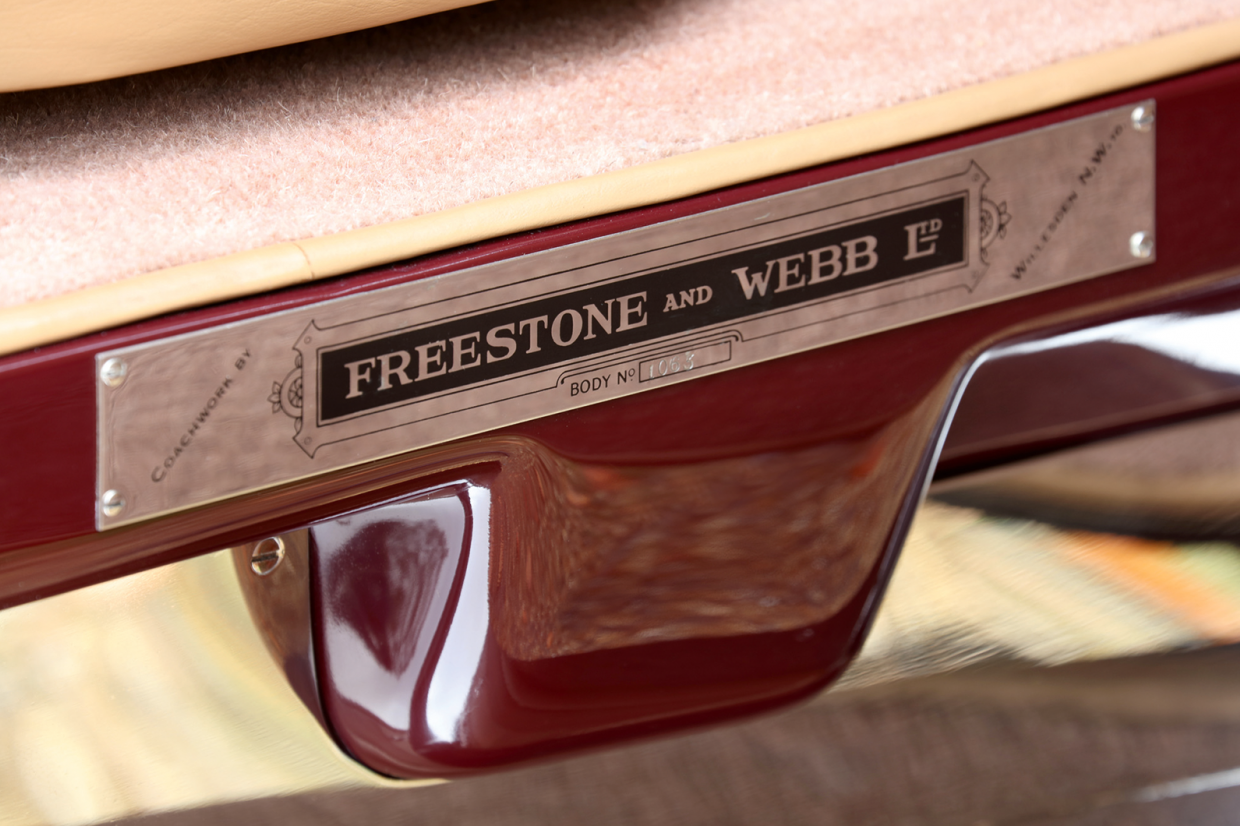 Producing a bespoke vehicle, even for a special client, was not a quick job, particularly for a firm with a reputation for quality craftsmanship.

Specification details noted ‘for use in the UK and Continent, mainly fast touring’, but Leigh also requested several special features such as a bold black six-inch speedometer and rev-counter. He also stipulated that the exhaust system should be lowered by three inches.

How much input Leigh had into the styling isn’t known, but the early ‘razor-edge’ body was one of Freestone and Webb’s sleekest creations.

The roofline brilliantly accentuated the bonnet length, while the individual wings, with sharp, defined peaks and lack of running boards, give this coupé a dramatic stance.

The tail was finished off with a single spare mounted at a rakish angle, with a full cover and no bumpers. For paint, Leigh instructed a two-tone red scheme that further enhanced the sleek profile. 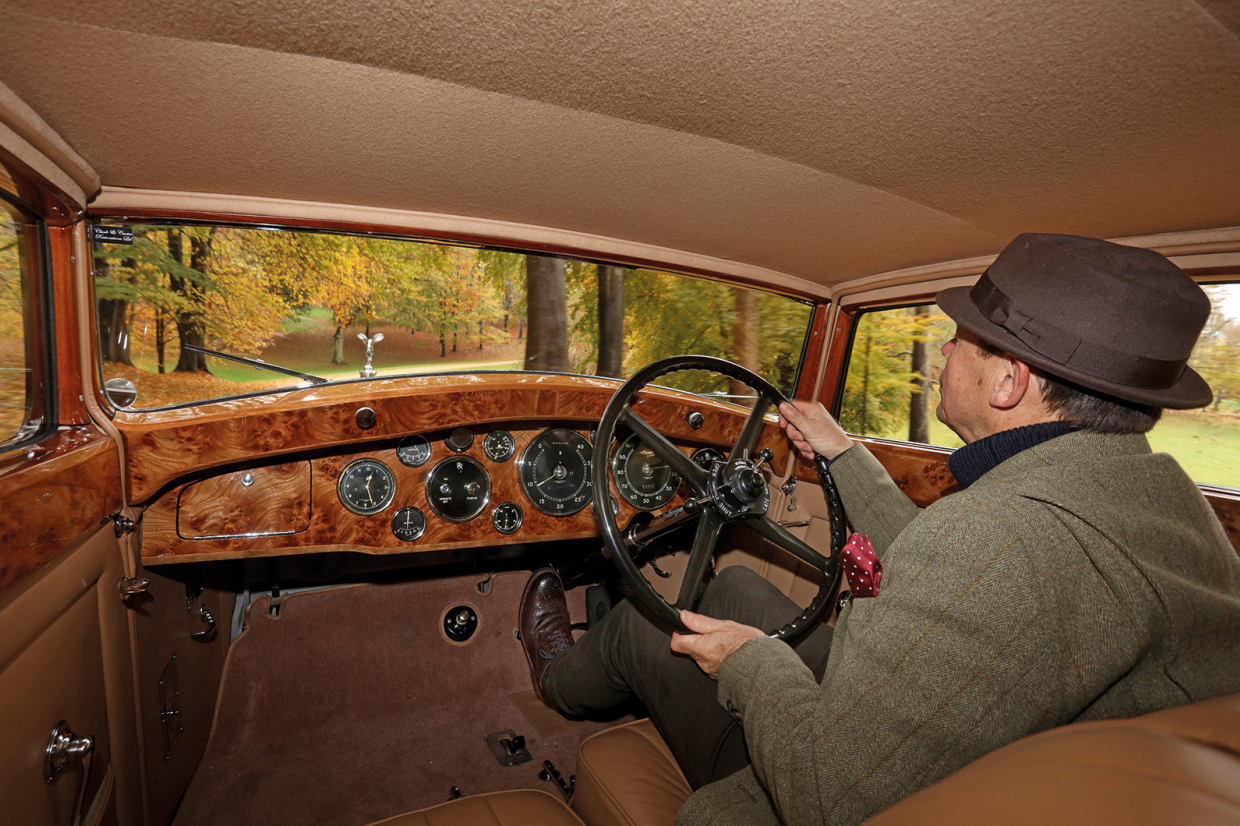 The magnificent car, registered AXA 60, was no doubt enlisted for winter motoring in late 1933, Leigh cruising between his various grand houses for Christmas and New Year celebrations.

Admiring the restored coupé today, it’s easy to picture the great Phantom II arriving in the dark, flashing up long drives at speed, its huge Lucas P100s highlighting the way ahead.

Leigh and his wife Norah used 42PY extensively before it was given to his daughter on her 25th birthday, when he replaced his Continentals with four new V12 Phantom IIIs.

Leigh was a generous man. Aged 30 during the Great War, he was too old to serve, but after witnessing injured servicemen returning from France, he gave several properties to the Red Cross for shellshock treatment.

These included his father’s home Woodbourne, in Brooklands, Cheshire, where his wife personally supervised the conversion and fitting of equipment.

Despite the arrival of new models, 42PY remained in the Leigh family until 1938 when it was sold to B Sleath of Stratford-upon-Avon, who put the car into safe storage during WW2.

At some point, it was repainted black and fitted with bumpers. This was how Gibbs spotted it motoring through London in 1952, and was immediately transfixed by its appearance. 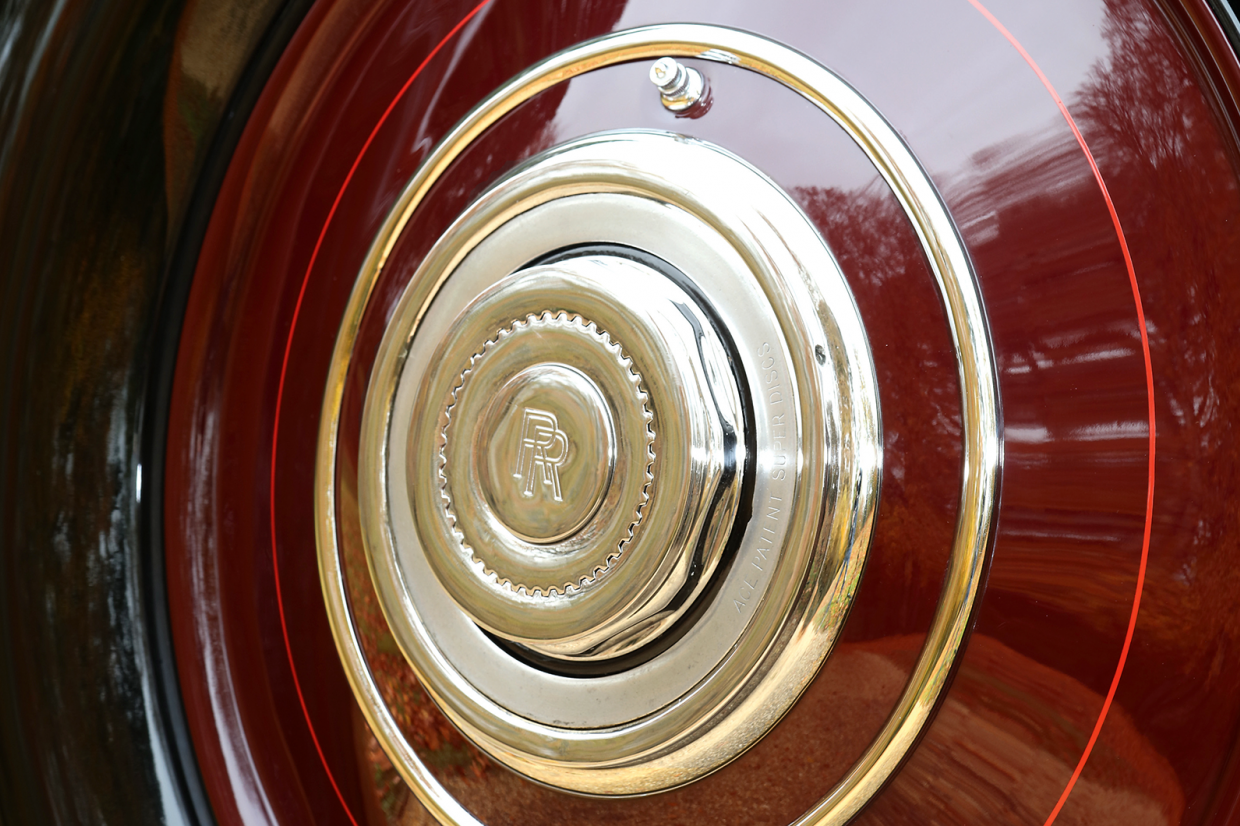 After 35 years with the Seidenschwartz family, the Rolls-Royce was sold to David Scheibel of Toledo, Ohio, who enlisted D&D Classic Restorations to carry out a full rebuild.

Every aspect was fastidiously restored to a dazzling level, but Scheibel surprisingly opted to paint the Continental a single shade of maroon.

Once finished, 42PY became a concours star, taking a 100-point score and Best of Show at the RROC national meeting.

At Pebble Beach in ’92, the fixed-head coupé won its class and was awarded the Gwen Graham Trophy for the most elegant closed car.

The accolades for Freestone and Webb’s masterpiece continued across America, none more appropriate than at the 1994 Eyes on Classic Design staged at the Edsel & Eleanor Ford House, Grosse Pointe Shores.

Most interesting was the award from blind young adults, a cause the charity event supports. The striking coachwork even influenced those who are visually impaired, but you can imagine how the 1932 classic would impress.

If you close your eyes and feel your way around the car, over the ridged wings and down the endless bonnet, its radical form quickly takes shape in your mind. Various art galleries have done special sculpture viewings for the blind, but this Michigan car event is an inspired idea. 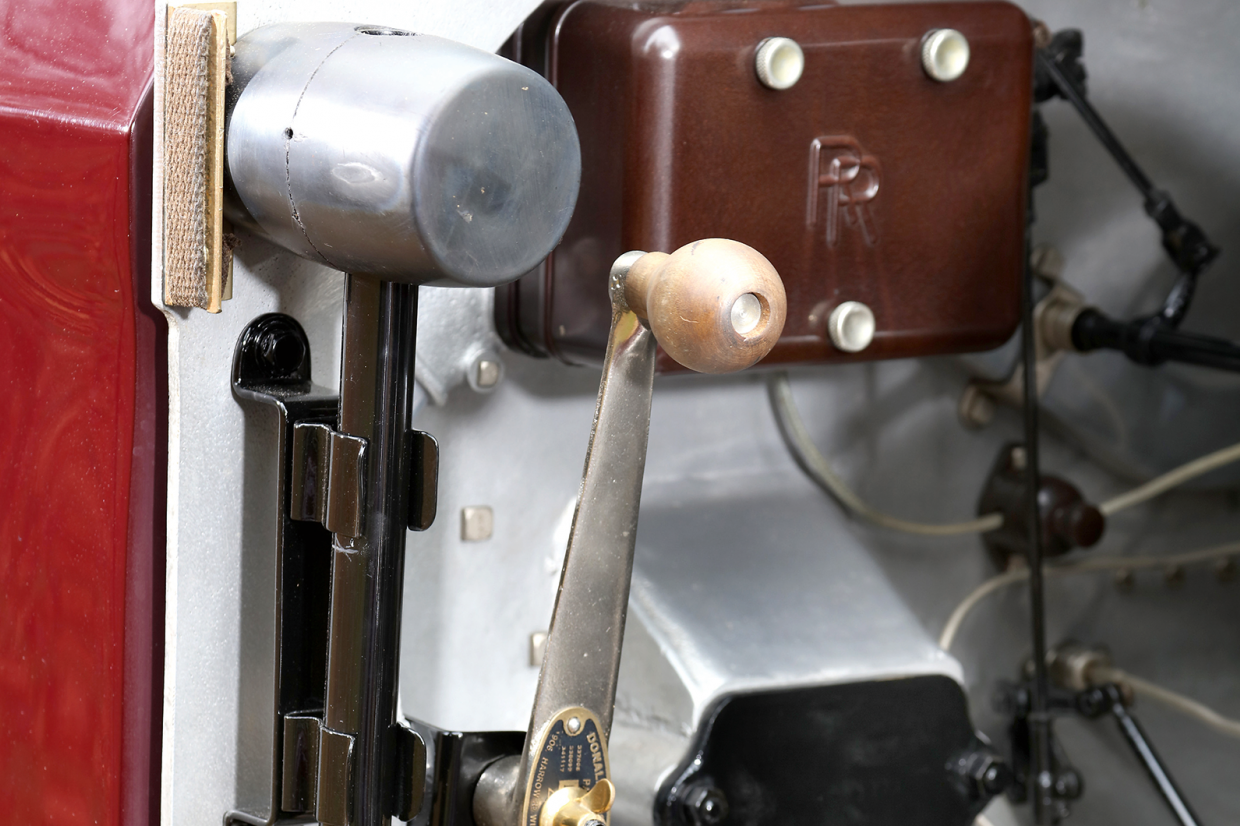 The Phantom II changed hands once more in the States when acquired by Roger Willbanks, who commissioned top American photographer Michael Furman to shoot a superb set of the imposing machine, the studio lighting further emphasising its handsome lines.

When RM Auctions and Sotheby’s linked up for the first Art and the Automobile sale in New York in 2013, the Freestone and Webb fixed-head coupé was among the select group of iconic machines offered, together with a Talbot T150 ‘Teardrop’ and a Ferrari 250LM.

The great car, at $2.4million, made a world-record price for a Phantom II and, for the first time in 56 years, it headed back home to join the outstanding collection of Lord Bamford.

The JCB chairman has long had a passion for coachbuilt RollsRoyces, in particular Phantom II Continentals and Phantom IIIs.

Straight away, he had the paintwork returned to an authentic two-tone colour scheme by Clark & Carter Restorations, just as Sir John Leigh had ordered 42PY from Freestone and Webb 90 years before. 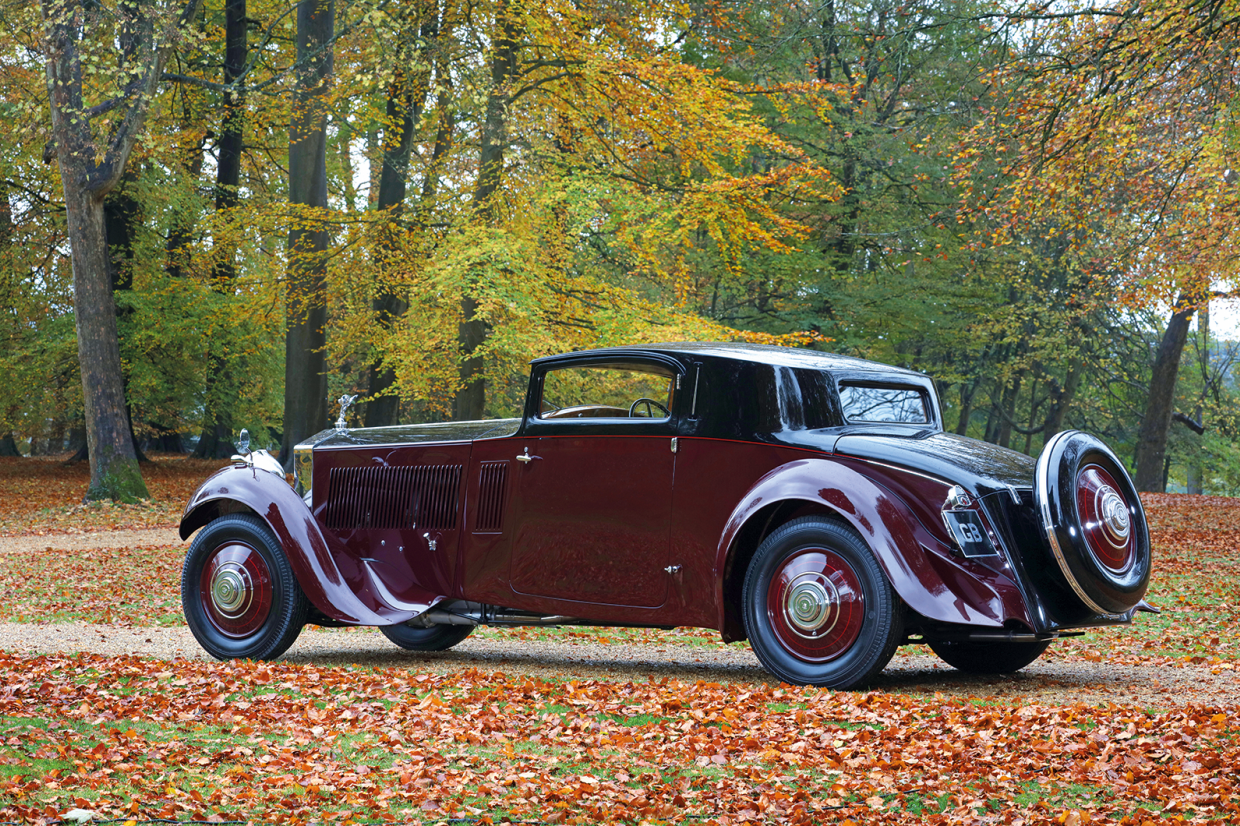 Open the huge rear-hinged door, and slide onto the deep, pleated cream leather seat after working your legs around the outer gear/handbrake levers, and the letterbox vista is instantly apparent.

Like in the famous Barnato Bentley 6½ Litre Gurney Nutting Coupé – a design that could well have influenced Leigh – the view down the massive expanse of bonnet is like a wide-screen movie.

The burr-walnut dashboard features a handsome array of black-faced dials, including a 100mph speedometer and rev counter marked to just 4000rpm.

The factory advised owners to keep to a 75mph maximum for the new German autobahns, with 3500rpm only to be used for short bursts of acceleration.

The broad four-spoke steering wheel with centre boss controls is the most dated aspect of the interior, harking back to the Edwardian Ghost.

Driving any properly maintained Phantom II is a marvellous treat. The creamy delivery from the 7.6-litre overhead-valve straight-six powers this 2-ton beauty with majestic ease and, once rolling, the worm-and-nut steering is precise and superbly weighted.

With such reserves of torque, the gearchange is barely needed but the action via a deep gate and lovely smooth movement is a joy to operate.

The mechanically servo-assisted drum brakes also inspire, pulling up the big car strongly in an emergency, while the ride, despite the Continental’s sportier spec – with flatter springs and fewer leaves at the rear – is still serene.

It’s a glorious event as the Continental purrs along wooded Cotswolds roads at 70mph in top. In the early 1930s, this exclusive experience had parallels with a private jet today, which really puts Sir John Leigh’s fleet of four Continentals into perspective. The cotton magnate certainly travelled in style.

How the other half lived: Bentley MkVI vs Armstrong Siddeley Sapphire 346

A missed opportunity? This is the only Jensen CV-8 convertible 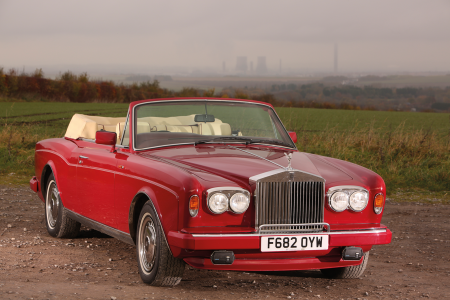 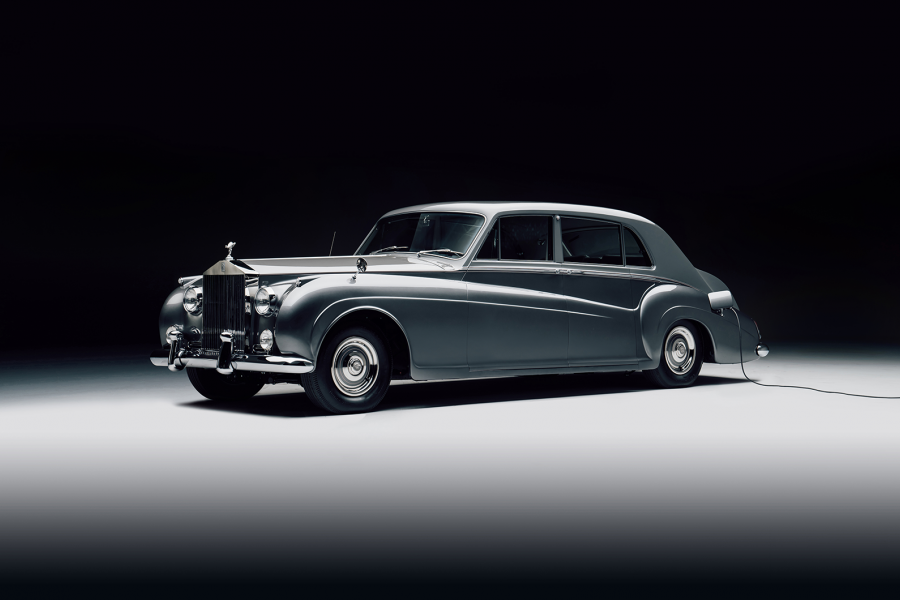 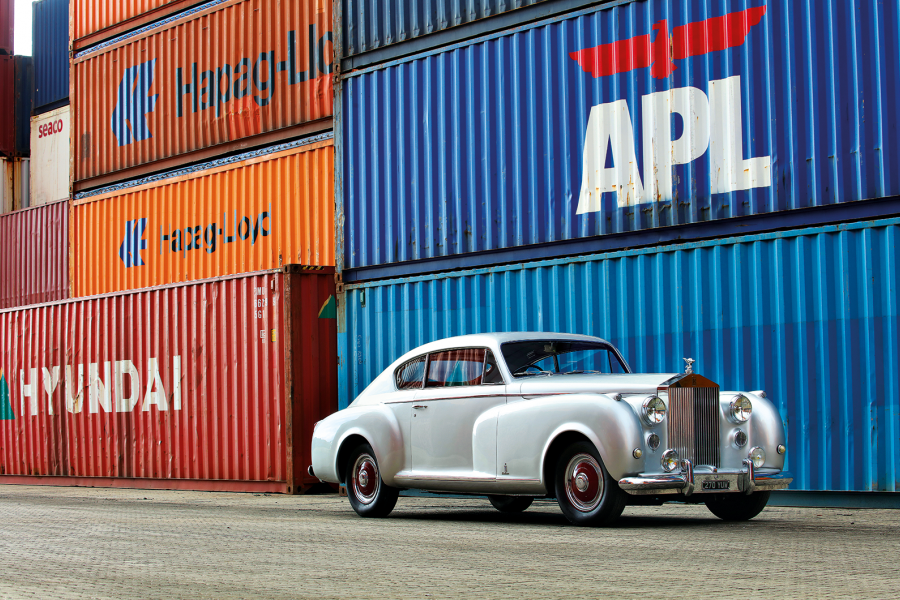 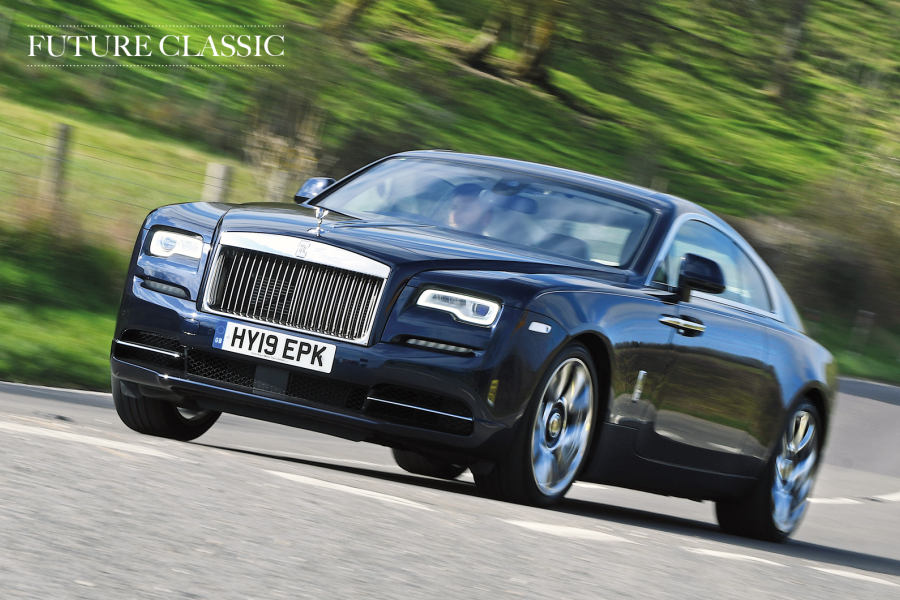