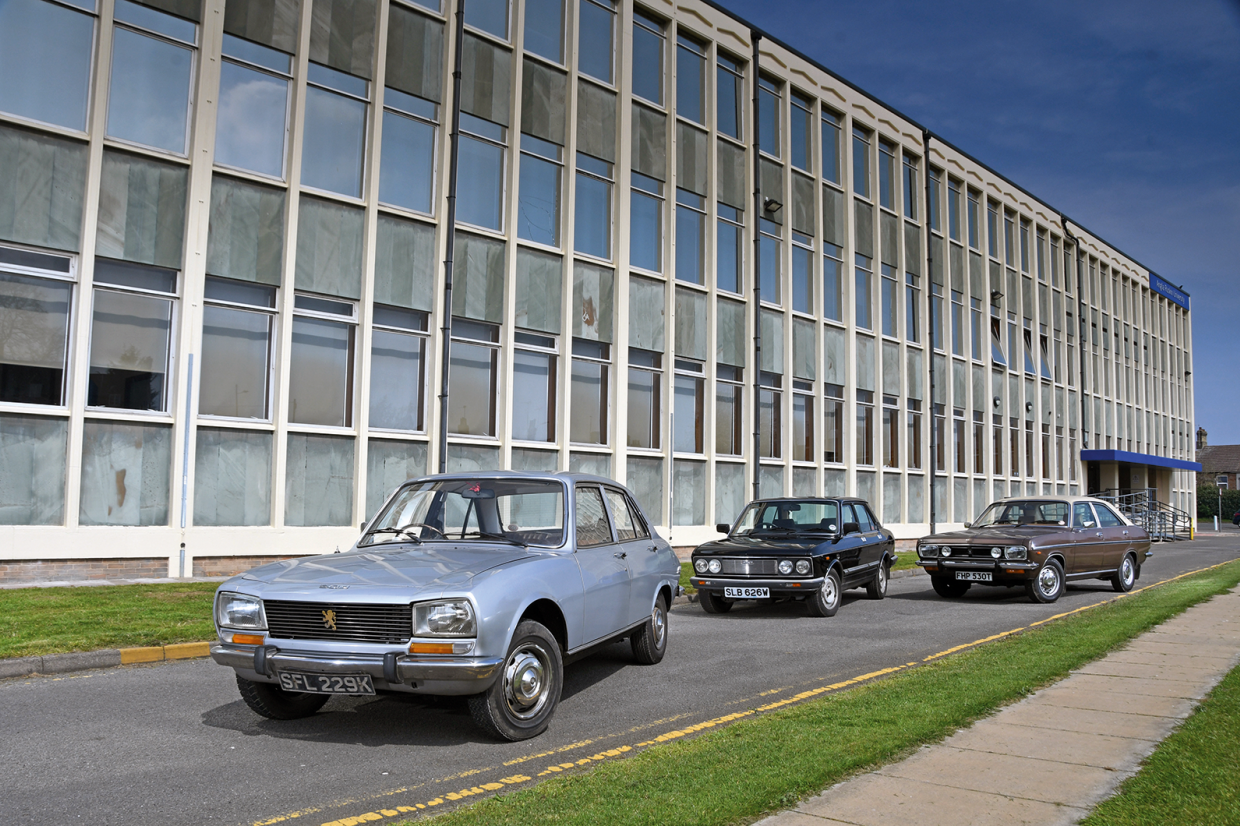 So you’ve finally made it.You have your own office, the keys to the executive washroom and no longer consider the Jubilee Pancake from the roadside Little Chef to be the height of culinary sophistication.

And with such new-found status comes a new company car, but you are keen to avoid the usual choices of Ford Granada Mk2, Vauxhall Carlton or Leyland Princess. Three vehicles catch the eye: the Chrysler 2 Litre, the Fiat 132 and the Peugeot 504. 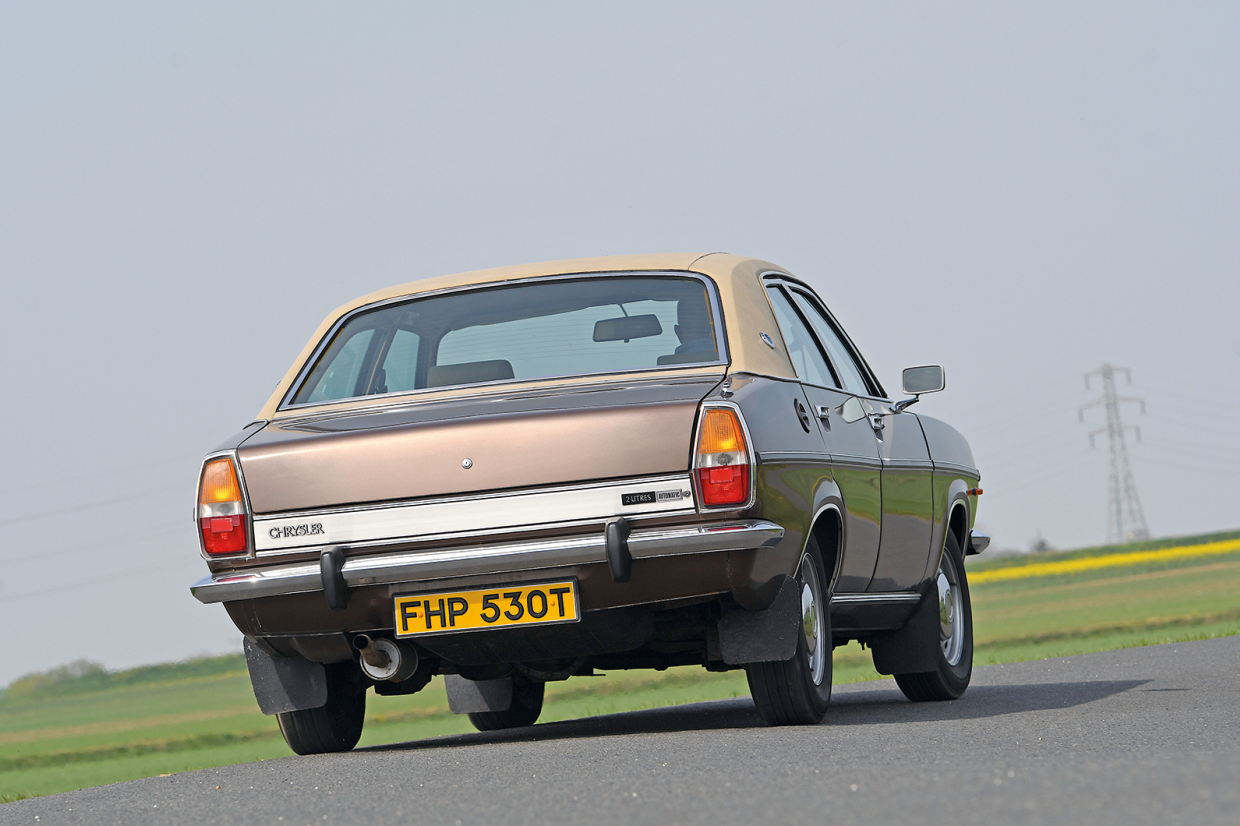 Brown with beige vinyl roof is the epitome of the 1970s

Like so many 1970s Chryslers, the saga of the 2 Litre is a faintly bizarre one. For while some line-ups have a complex history, such as the Citroën DS or the Triumph 1300/1500/Toledo/Dolomite, the large European Chrysler’s is plain Byzantine.

In the late 1960s, the Rootes Group and Simca developed a separate range of flagship models: the ‘C Car’ and ‘Projet 929’. The former was a belated replacement for the big Humbers; the latter was Simca’s first large saloon since the demise of the Vedette in 1961.

However, management in America decreed that only the C Car would enter production, it would be made in France and badged as a Chrysler.

Car evaluated the 180 against the Audi 100 LS and complained that it represented ‘a retrograde step’ for the company. The tester also noted with some headwaiter-like disdain that ‘the less discerning may find the 180 attractive’. 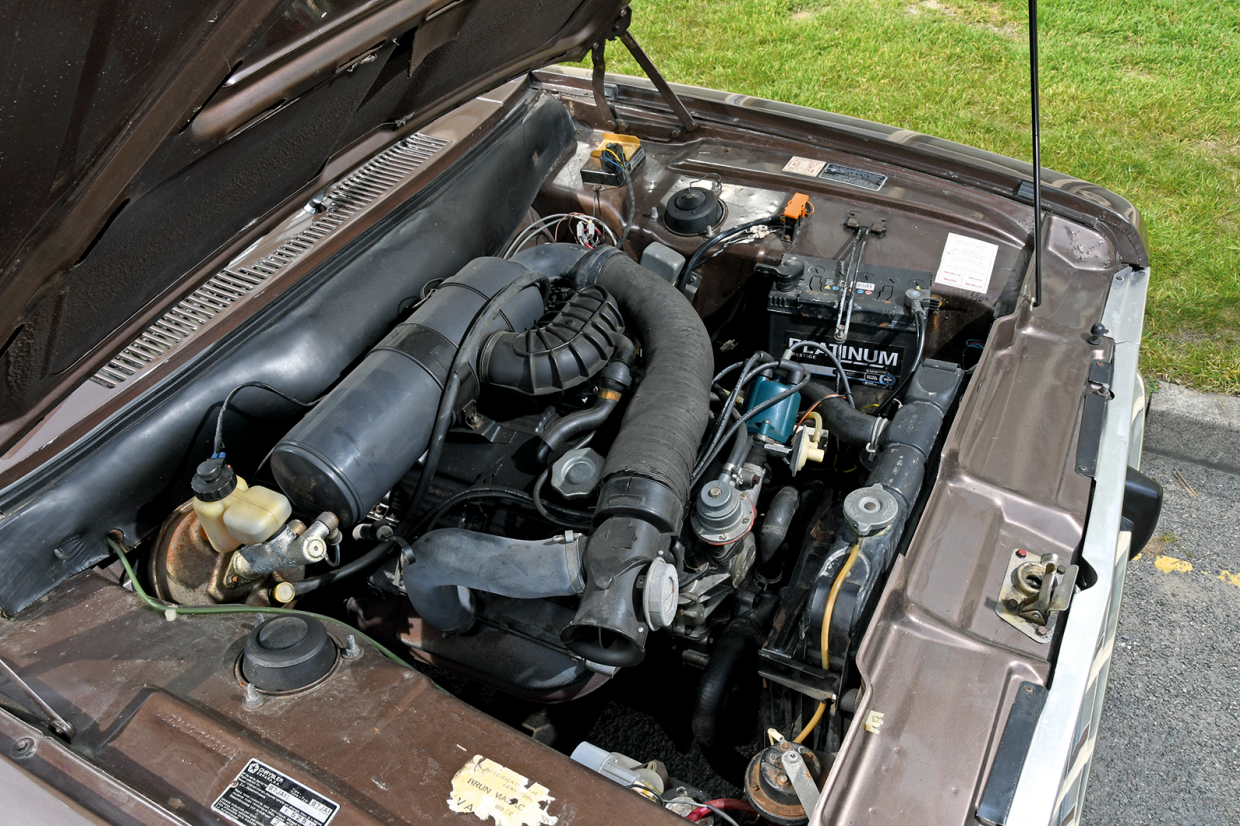 The 2 Litre was launched at Amsterdam in 1972 and, to denote its enhanced status, the (very discerning) buyer would take home a car with a slightly longer wheelbase, auxiliary lamps on its bumper, automatic transmission and, of course, a full-length vinyl roof as standard.

When sales of the 2 Litre began in Britain the following year the market was already dominated by the Ford Granada, and the 2 Litre’s commercial prospects were perhaps further affected by the average British motorist’s unfamiliarity with the Chrysler marque.

Manufacture transferred to the Barreiros factory in Spain in 1975, and following the sale of Chrysler’s European operations to Peugeot the model was rebranded as a Talbot three years later – although the earlier badging was retained in the UK for a time. Another odd footnote to the line-up’s history is the Australian-built Centura, which combined the 180/2 Litre bodyshell with a range of hemi ‘six’ engines, including the 3.5-litre and 4-litre units.

During our test, the odd passerby asks: “Hillman Avenger?” Which is wholly understandable, given the 2 Litre’s sheer rarity and that it was created under the stewardship of design director Roy Axe. Even 40 years ago the average Briton was more likely to have experienced the Chrysler as a 160 taxi while on holiday in Santa Ponsa than on the High Street. 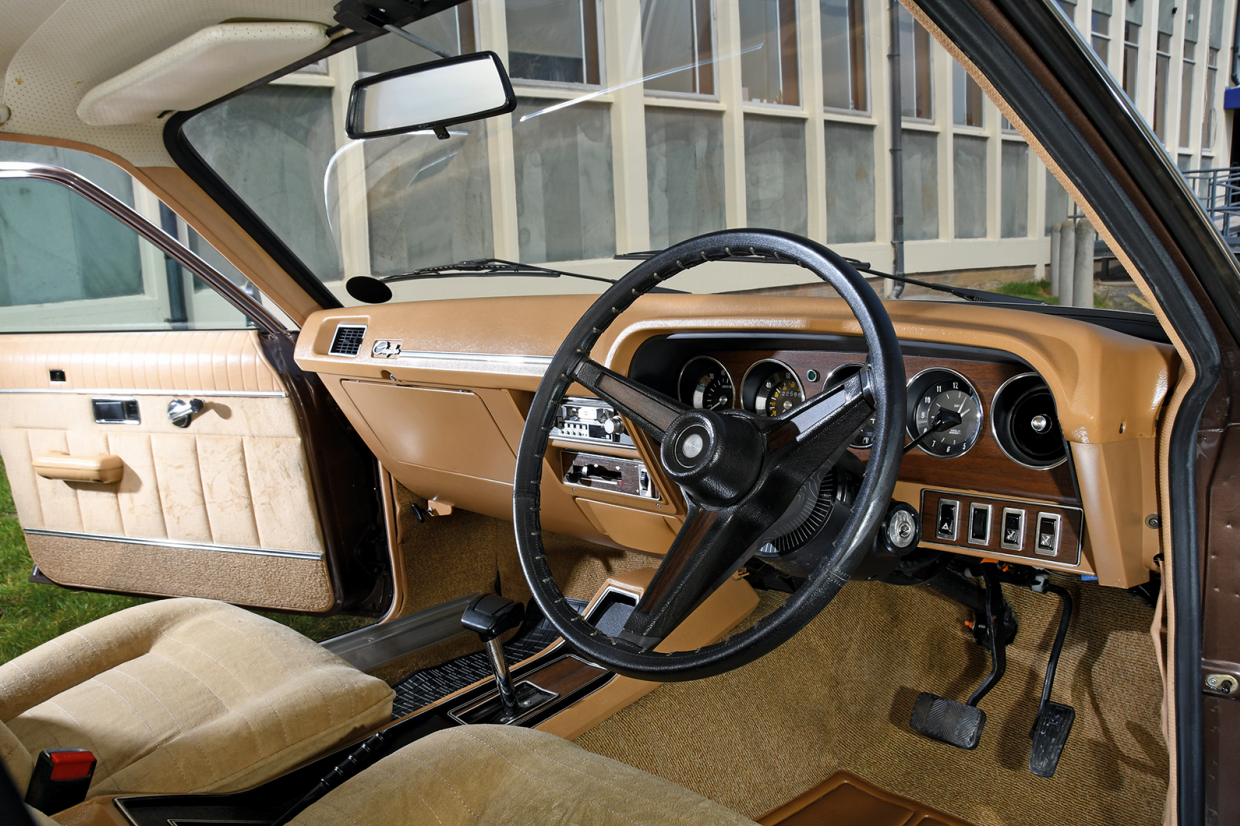 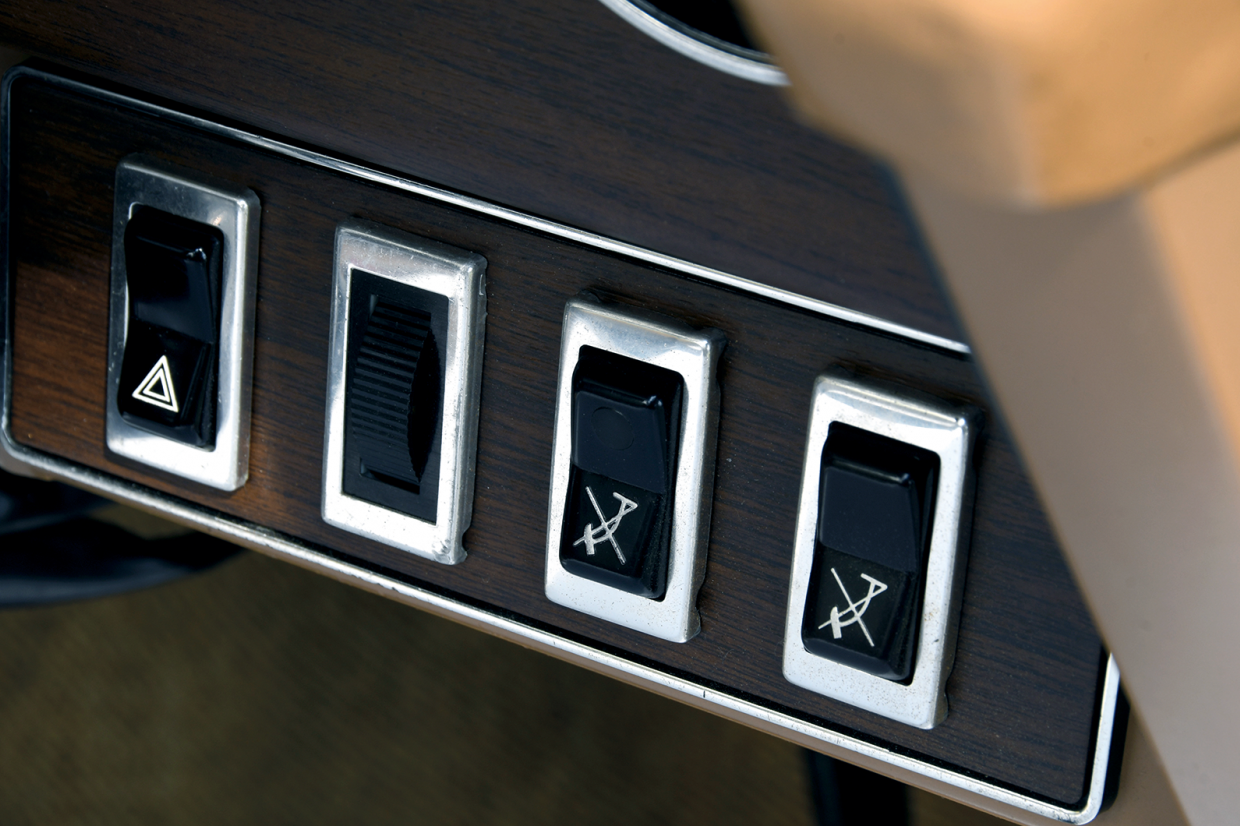 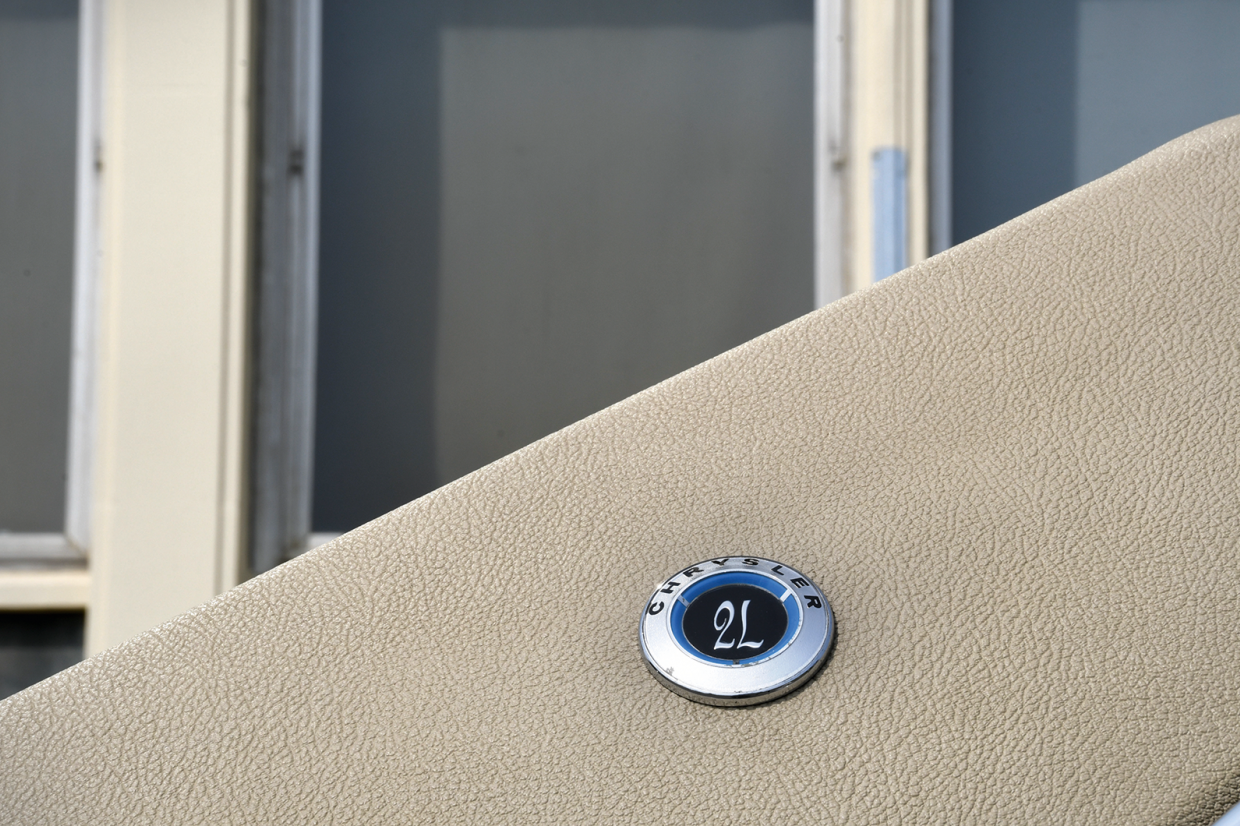 The Talbot Tagora replaced the 2 Litre in early 1981 and only a couple are now believed to be on the road in the UK – half of which belongs to Tony Owen, who also owns two Tagoras, several Alpines and Solaras, a Simca 1100 and a Chrysler Hunter.

Owen’s initial foray into the strange world of Anglo-American-Franco-Spanish prestige motoring was in 1984 when he acquired a 1978-vintage 180. Some 25 years later he became the third owner of his current 2 Litre, which had spent its early life as a Coventry-based demonstrator for Chrysler UK.

In terms of showroom appeal the 2 Litre is a handsome car, but towards the end of its production run its lines were seen as redolent of the recent past.

It was a car that seemed to belong to the early part of the decade, that of flamboyant TV investigator Jason King and Hai Karate aftershave rather than The Professionals. Meanwhile, the dashboard fascia is so 1970s Detroit that it comes as something of a surprise that there is no column selector for the automatic TorqueFlite transmission.

The 180/2 Litre was a better seller in the UK than in France, albeit still limited, and its owner praises its comfort, smoothness and general ability as a mobile living room.

The range might have been more popular had Chrysler invested in its development, including an upgrade of equipment levels – consider that a 1978-spec Granada GL had central locking and power steering, both of which were lacking from the 2 Litre. Modern traffic vividly demonstrates the need for the latter.

Yet, for anyone who craved the chintz of a Toyota Crown but lacked the budget, it was a very agreeable alternative. 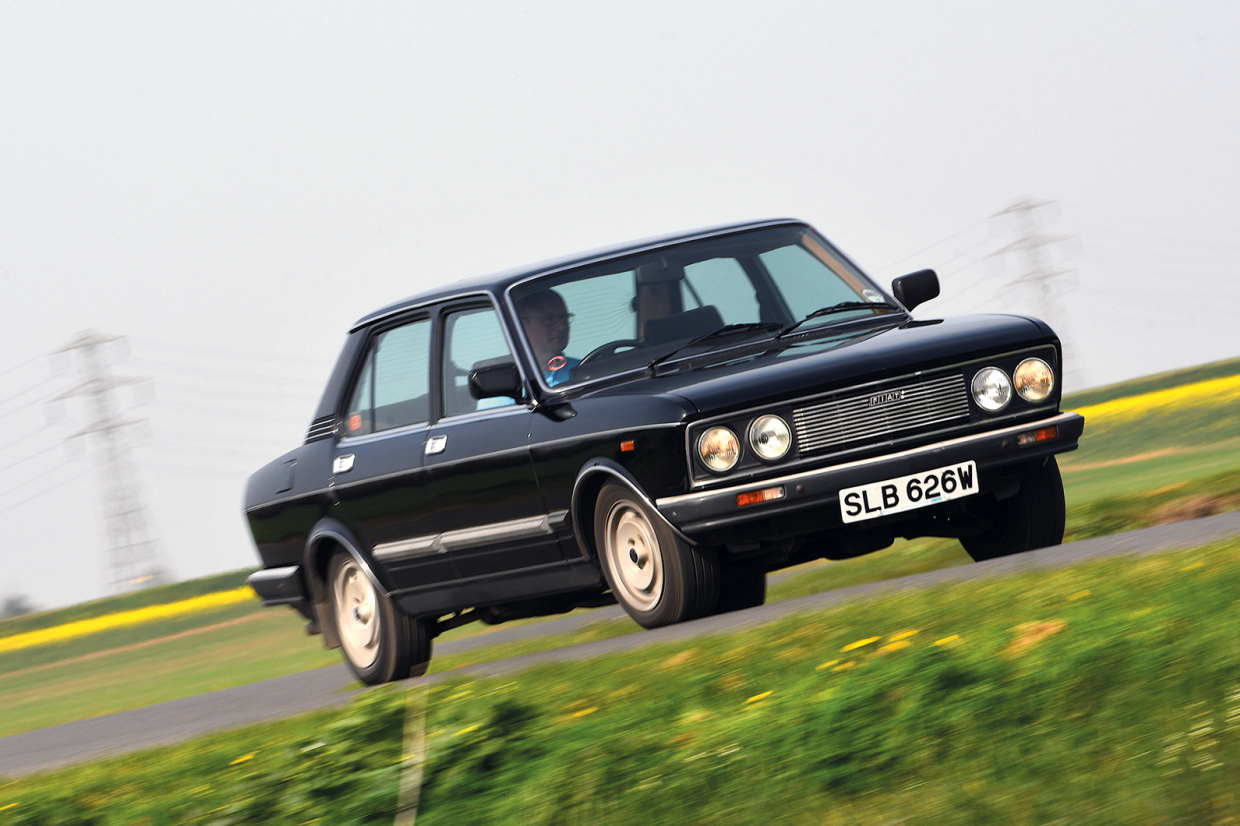 Compared with the 2 Litre, the slightly raffish Bertone coachwork of the 132 is less time-locked – Fiat claimed that it captured ‘the essence of true style, elegance and good taste’. On its launch in May 1972, the 132 served as the replacement for the 125 and heir to the fintailed 1500L/1800, which ceased production in 1968.

The initial choice of powerplants was 1592cc or 1760cc, and the 132’s good looks and generous equipment found praise. Over-assisted brakes drew criticism, but ‘our’ Bellini test car’s owner, James Nicholson, believes that only afflicted UK-market cars. “It was due to the conversion to right-hand drive,” he says. 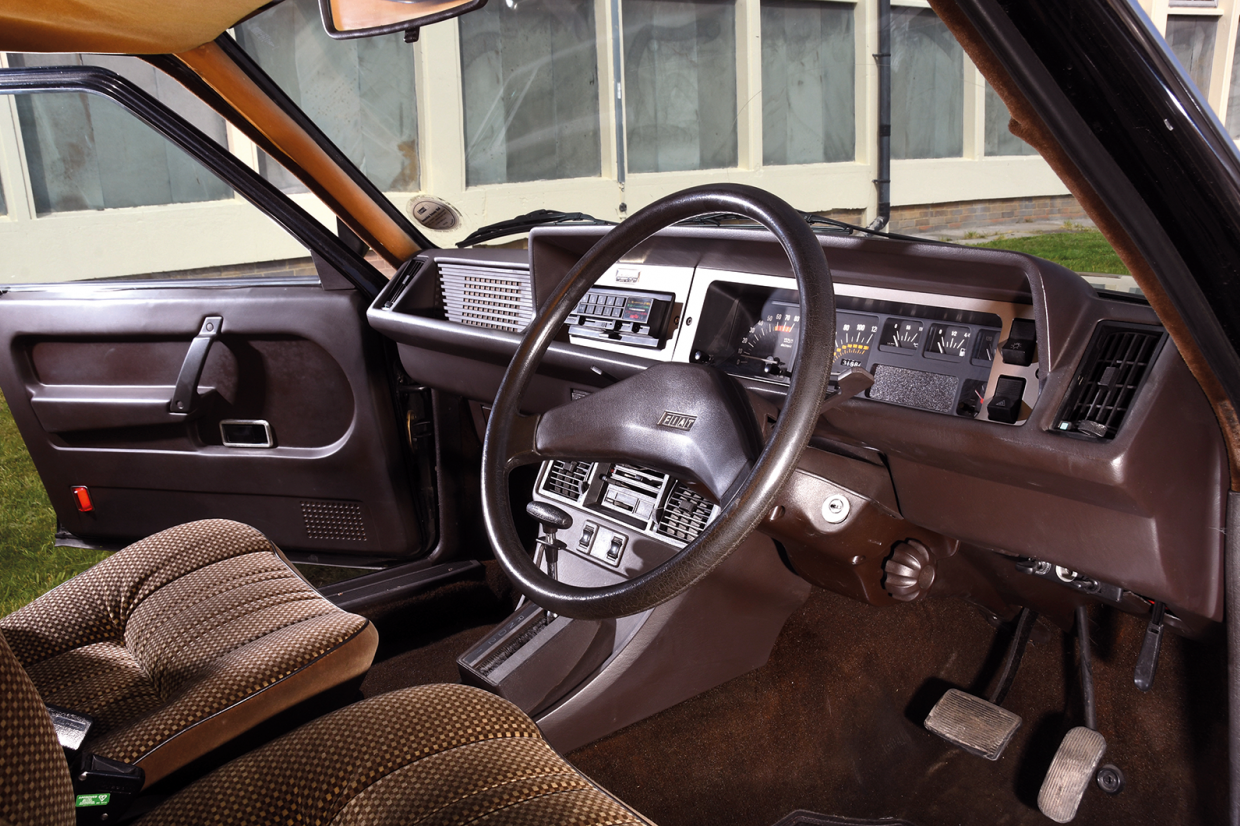 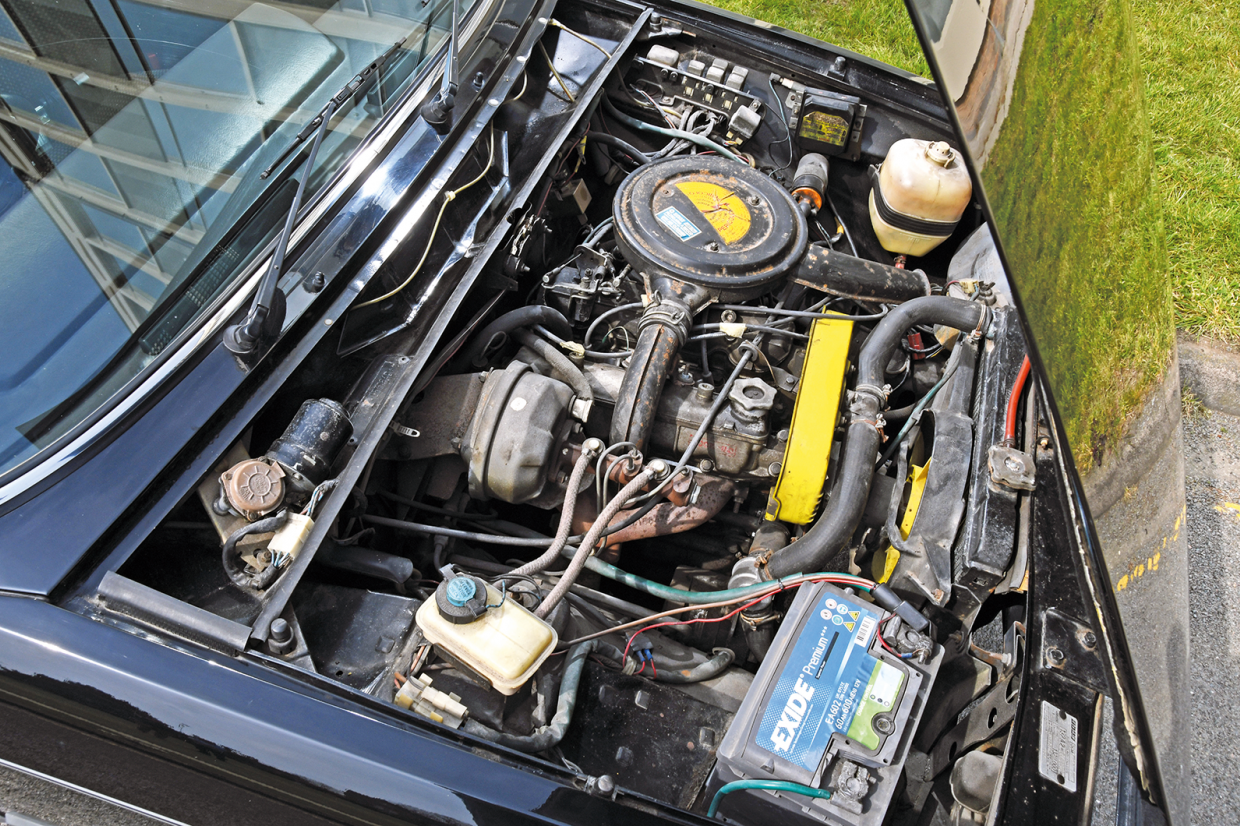 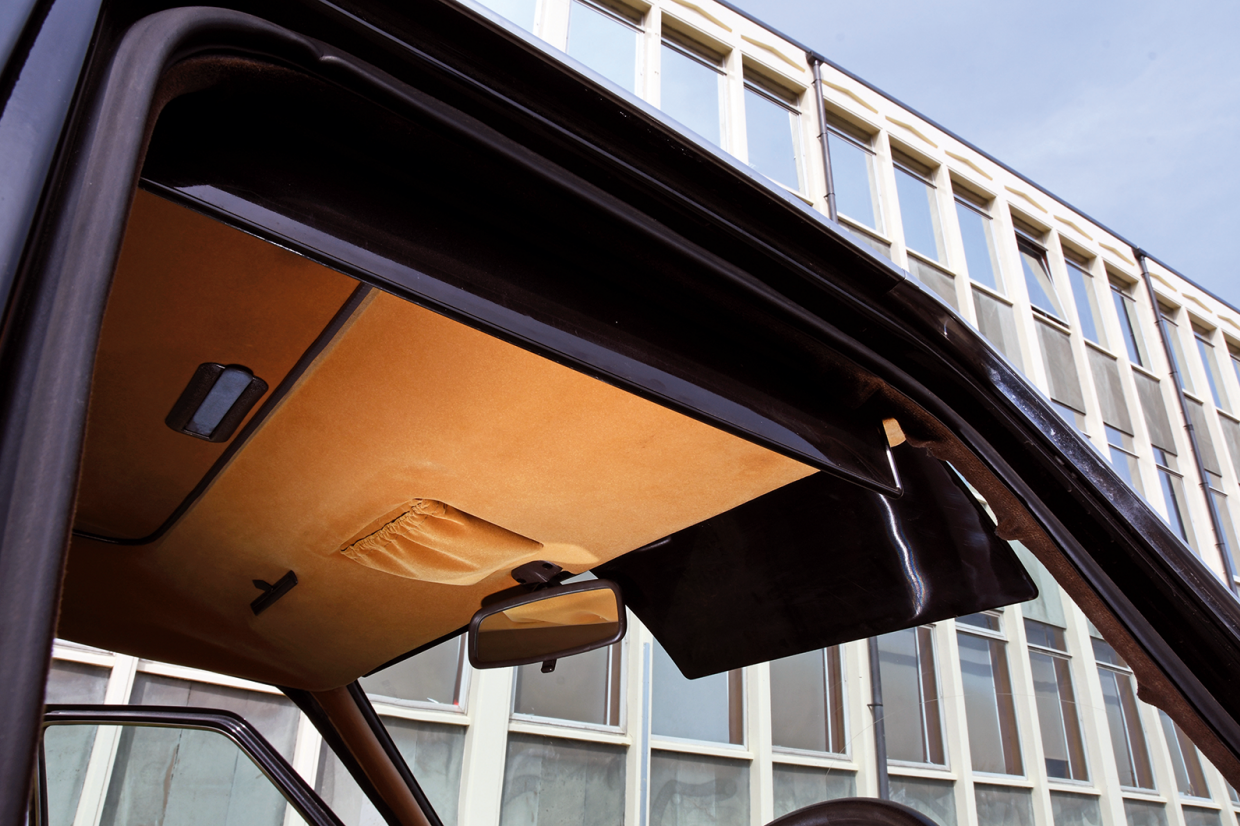 The Argenta, essentially the same formula but with the exciting addition of square headlamps, replaced the 132 in 1981, and before production ceased in 1985 Fiat even offered a supercharged 133bhp Volumex edition.

Sightings of any member of the 132 family on British roads are rare, but Nicholson has long been a champion of this somewhat overlooked and exclusive Italian car. “My father drove them in the 1970s,” he explains. “I bought my first one when I was at university; it was bright orange.”

The Bellini retains a certain presence, not least because of its dark colour scheme – Turin probably “had a surplus of black paint,” reckons Nicholson – but the result was still ideal for arriving in style at any suburban wine bar. Fiat liked to claim the 132 2000 was a ‘Wolf in sheep’s clothing’, but it was less a sports saloon à la Alfa Romeo Alfetta and more a long-distance cruiser, especially when fitted with the optional automatic transmission.

Nicholson sees his Bellini as an enjoyable form of executive transport: “It rides and handles well, and is probably better to drive than the earlier models because of the improvements Fiat made to the 2-litre 132. The driving position is typical of an Italian car of that era, but fortunately I have short legs!” 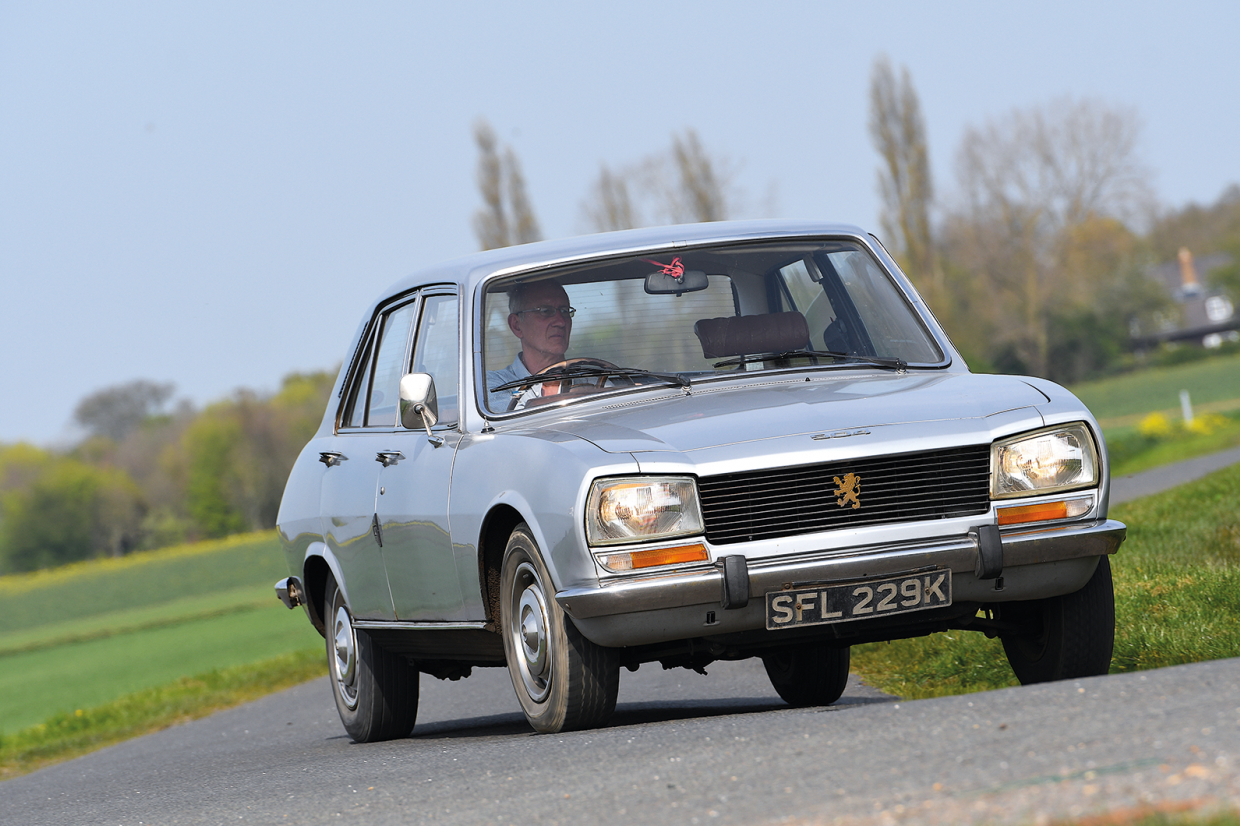 Peugeot specialist Hasson uses his 504 as a daily driver

The Peugeot would probably have been favoured by the professional who appreciated fine engineering. When the 504 took its bow, on 12 September 1968, it was regarded as the eventual heir to the eight-year-old 404 and an alternative to a Citroën ID20, Renault 16TS or even a W115 Mercedes-Benz.

The motoring press was taken with the all-disc braking, rack-and-pinion steering and Peugeot’s famed attention to detail. Autocar ranked it ‘among Europe’s finest touring cars’ and it even took the honour of European Car of the Year in 1969.

Originally available with a 1.8-litre engine in either standard or fuel-injected form, in 1970 it was offered in 2-litre guise. Robert Hasson’s 1972 example is a GL equipped with the optional leather trim, which complements the understated elegance of the Aldo Brovarone-designed coachwork.

“There was a wide choice of models and it had superb ride comfort in armchair-like seats,” Hasson says. The saloon now appears to be a rarer sight than its Coupé or Cabriolet stablemates, and you are more likely to encounter the standard four-door chasing a yellow 2CV in For Your Eyes Only than outside Waitrose.

In 1968, Motor wrote that, ‘The 504 seems certain to keep the lines at Sochaux occupied for some considerable time to come,’ and, although production ceased in France in 1983, it was still being made in Nigeria as recently as 2006.

Hasson became only this GL’s second owner three decades ago and still uses it on a daily basis. “I bought it from a garage in Bishop’s Stortford back in 1988,” he recalls. “Its first custodian had used it mainly as a weekend car, and there were only about 30,000 miles on the clock.” 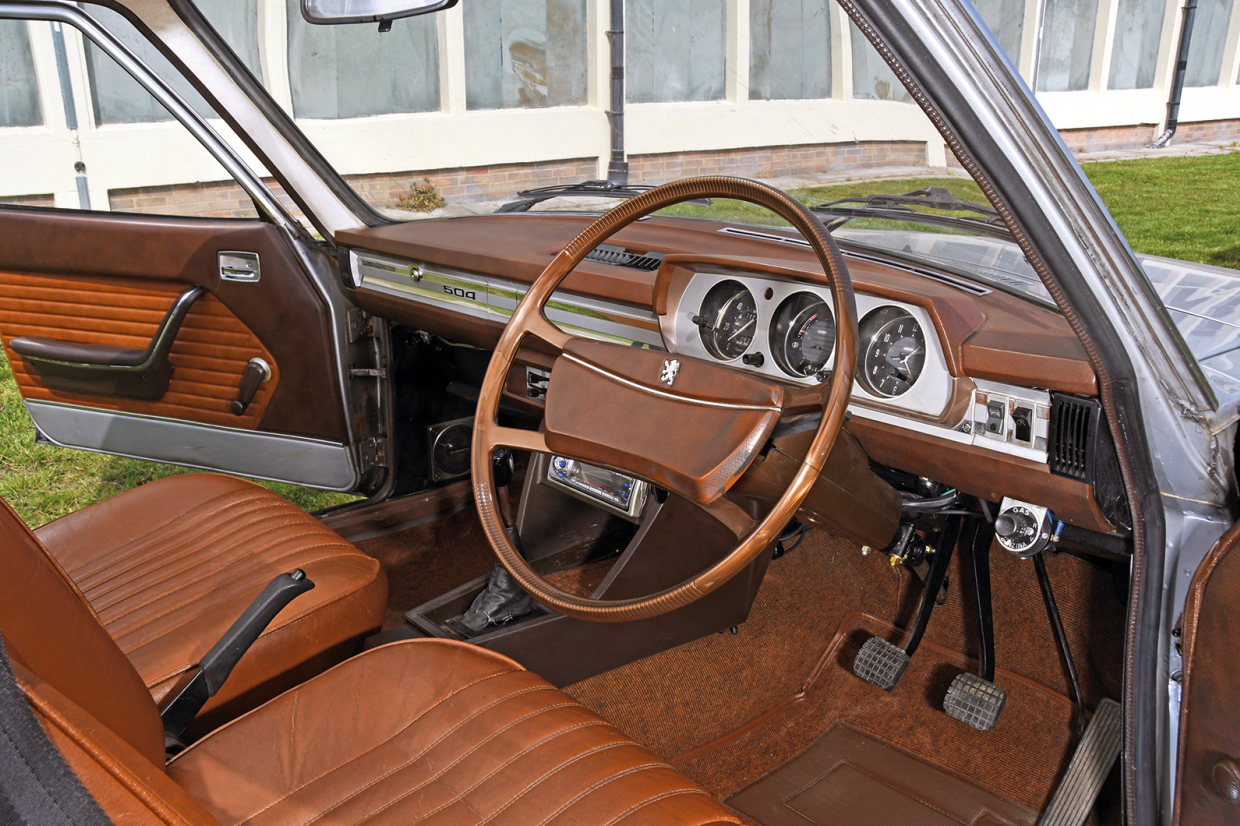 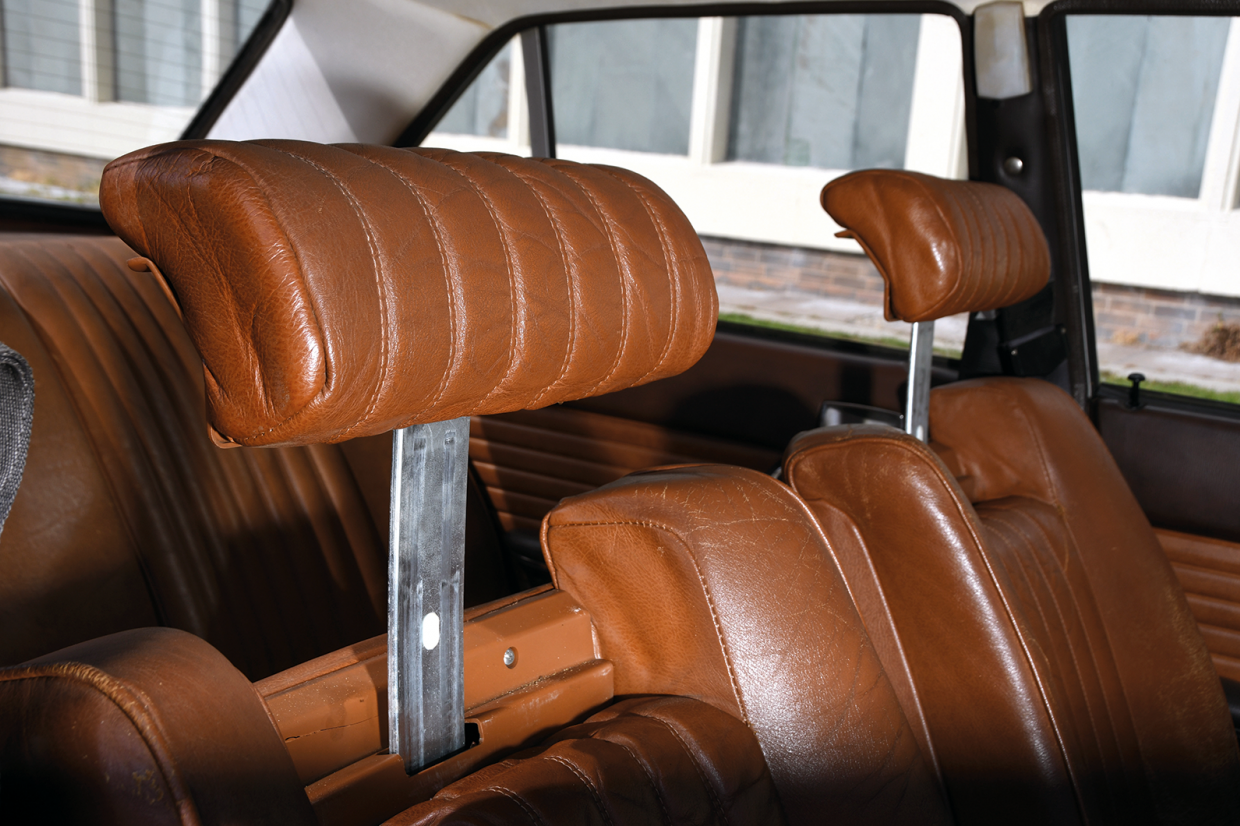 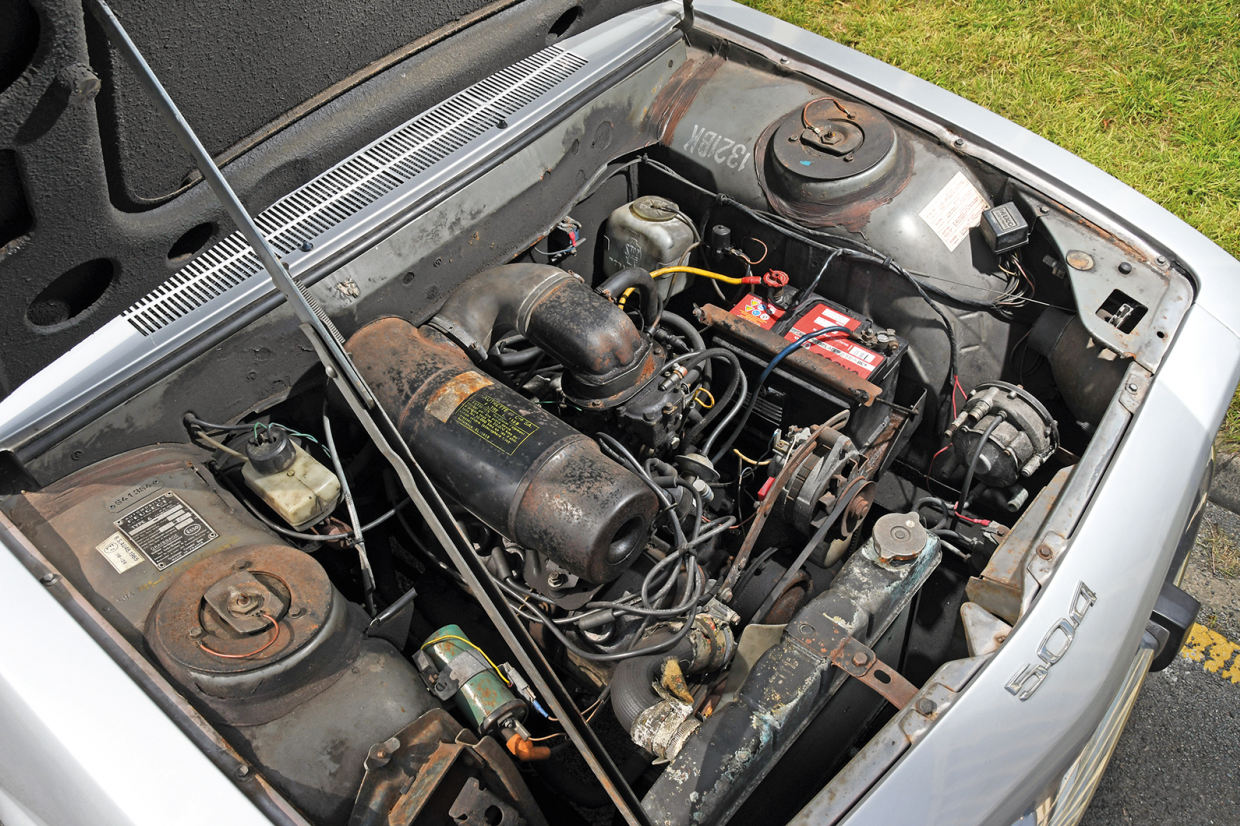 The interior is low-key to the point that the chrome decoration on the dashboard appears almost out of place. The specification also includes retractable front head restraints that carry the disconcerting air of a guillotine.

For urban duties “the steering lock is excellent”, according to Hasson, and this example boasts a five-speed gearbox from a 504 Pick-up. “The Peugeot can easily cruise at 70-75mph and keeps up with motorway traffic well,” he adds.

The Peugeot’s Achilles’ heel in Europe was corrosion, a fault it admittedly shared with countless other contemporaries, but this was not as much of an issue in other sales territories.

And the 504 was truly a ‘world car’: it was assembled or manufactured in Argentina and Chile, in Australia, along with China, Egypt, Ireland, Kenya, Portugal, South Africa, Spain and Taiwan. Hasson’s business involved buying them, breaking them for spares or taking them to Africa, and he’s driven across the Sahara Desert no fewer than seven times.

He currently owns three Peugeots: “I bought my first 504 in 1982, and since then I’ve not driven anything else when I am in the UK.” 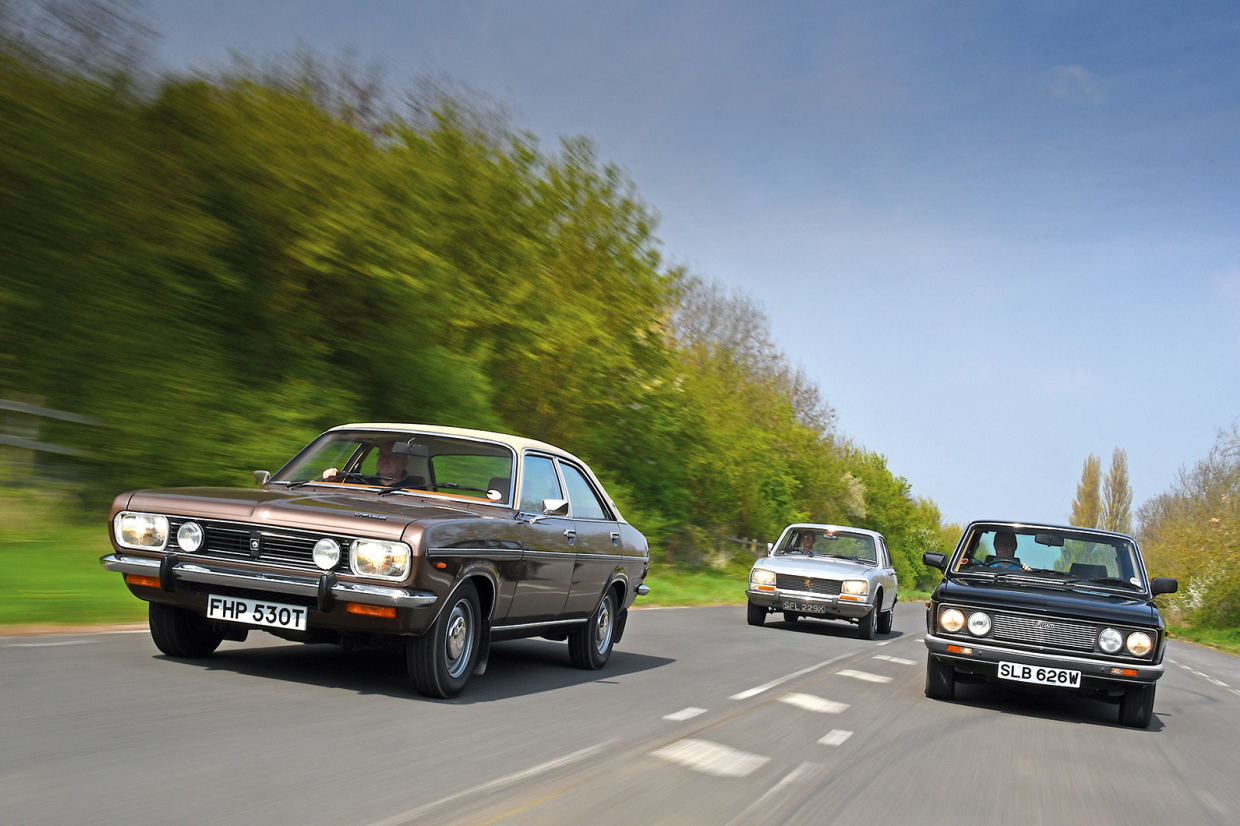 The enlarged Avenger-esque body shape of the Chrysler 2 Litre hints at its family heritage, while the Peugeot 504 and Fiat 132 perfectly represent their marques’ lineage

Each of our group would have carved a distinct niche in the realm of smart motoring at a time of fondue parties and discreetly boasting of owning a colour television set.

The Peugeot was the conveyance for those who had little time for what he or she regarded as gimmicky or frivolous, and who appreciated the innate quality of the 504. The advertisement’s claim that the Peugeot was ‘the best-made performance car in the 2-litre class’ was wholly justifiable, and the GL would have been ideal for the driver who demanded prestigious, reliable transport with
a certain Gallic charm.

The Chrysler 2 Litre’s role was to provide a degree of glamour at a price within reach of the average office manager or senior sales consultant. Had Chrysler decided to follow the original plan, which was to employ the Humber name and use a range of new V6 engines, it might have enjoyed a higher profile in the UK.

As it was, the 2 Litre was perfect for the sort of pub landlord who desired the style of a Datsun 280C or a Mercury Monarch Ghia, even, but without the inevitable fuel bills. And, in terms of late-1970s business culture, Beverly Moss from Abigail’s Party fame would almost certainly have barked that a Chrysler in brown metallic paint was the pinnacle of social achievement. 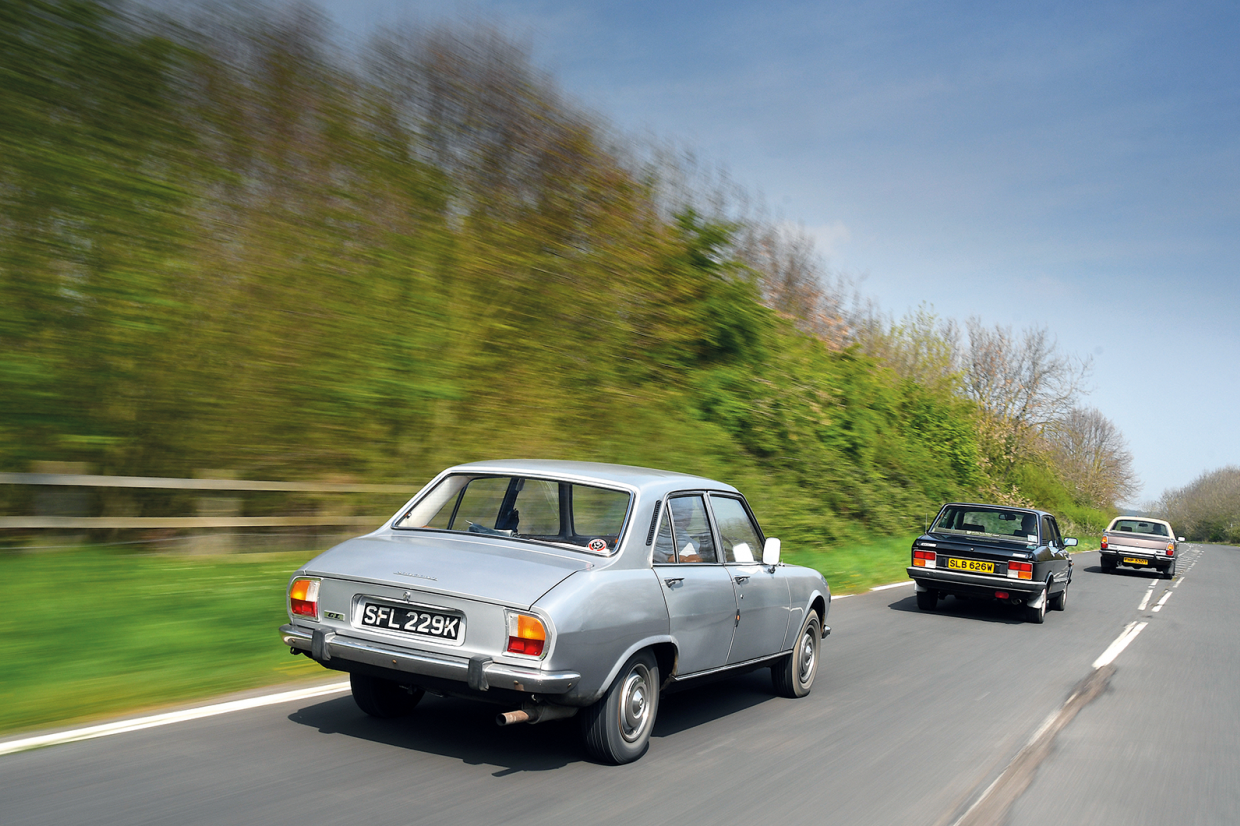 All three are now rare sightings in the wild – the Peugeot being the most numerous at around 30 or so left. The 132 is believed to be down to eight examples, while the hens’-teeth 2 Litre could be one of only two left on the road

The Bellini belongs with the Talbot-Matra Rancho or the HB-series Vauxhall Viva GT in that select category of cars that use their amiable flamboyance as their main selling tool.

This 132 among 132s appealed to anyone who wore Aviator sunglasses indoors. It would have appeared the height of Continental sophistication to a Terry Scott-style next-door neighbour.

Arriving home 40 years ago in a black Fiat 132 Bellini with Jona Lewie’s You’ll Always Find Me In The Kitchen At Parties blaring out through the sunroof would have prompted a formation bout of curtain-twitching. And that is exactly why it is my car of choice.

11 European imports that deserve a home in Britain 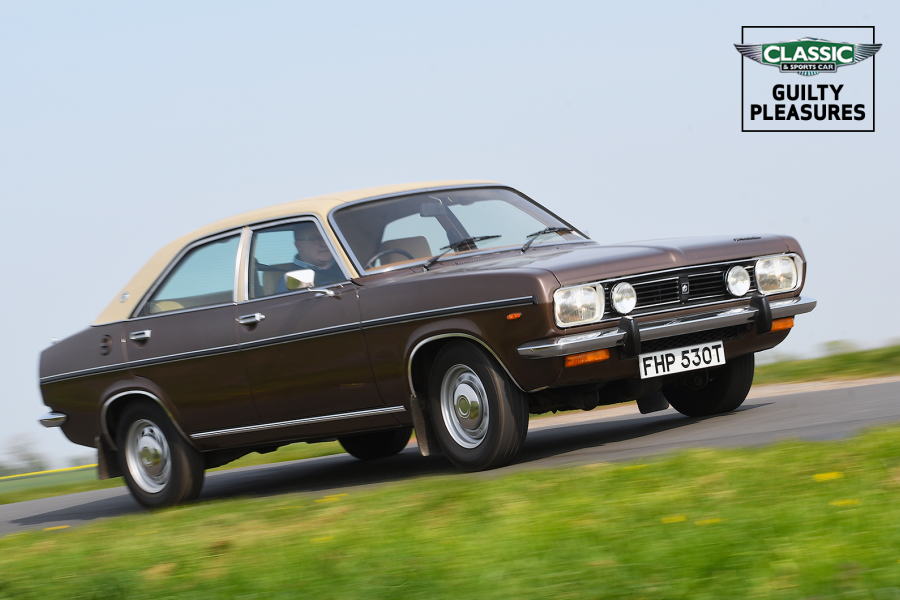