Out for the Count: Michelotti’s BMW 507 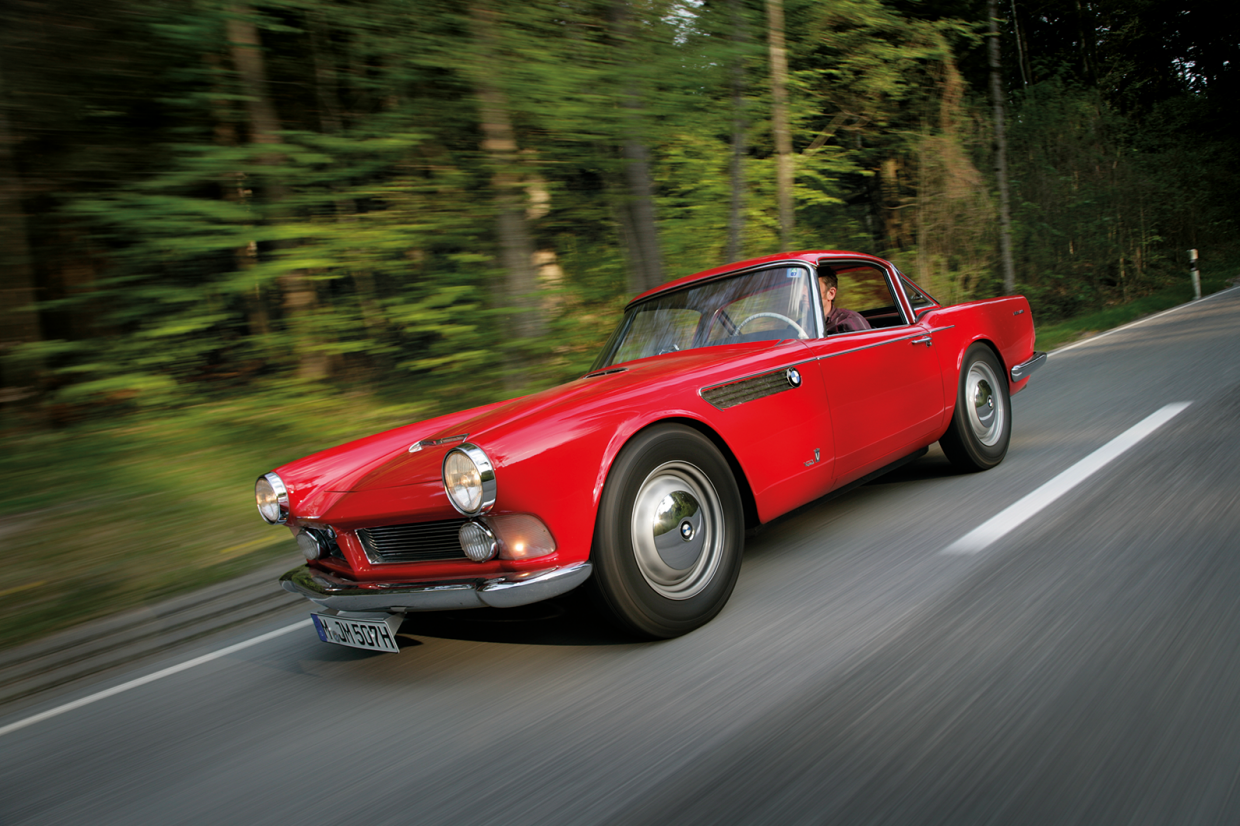 There is something surreal about driving a glamorous one-of-its-kind car such as this Michelotti 507 with nobody to chaperone you.

Once it was just a picture in a book, a forgotten if elegant curiosity in the narrative of the great BMW. But here it is in the metal, real and alive in the bright Alpine sunlight of an afternoon in Switzerland.

Just seeing it would be remarkable enough – soaking it up from every angle I realised I had no real sense of what it looked like from the front, only an image of its rear three-quarters. But here I am gunning it through the countless hairpins of the San Bernardino Pass, all howling tyres and gratuitous throttle blipping, driving a classic transcontinental journey in the one-and-only 507 Michelotti (courtesy of Vignale). 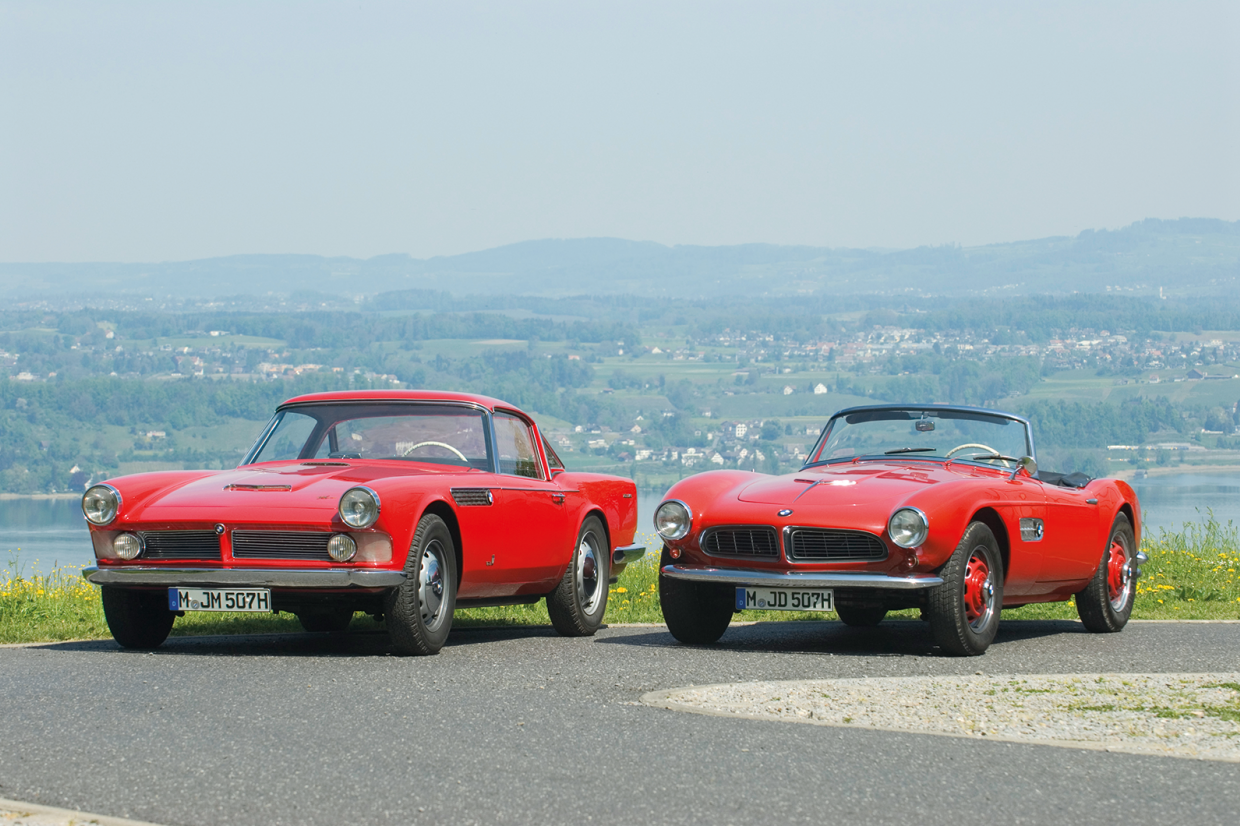 Driving – more sedately – through some of the Swiss towns and villages, I wonder if the people sipping beers and coffees in the cafés recognise the significance of this obscure show car as it drives by – big, throaty and mean.

That only two outside stylists had the nerve to try to improve on Count Albrecht Goertz’s 507 is not so surprising. It is still, probably, the most beautiful car the company has made, with a swoopy elemental shape that has instant appeal: feline, yet macho and muscular at the same time.

The idea behind Raymond Loewy’s attempt at a ‘futuristic’ coupé based on an early 507 chassis probably had its roots in a grudge he had against Goertz, who had trained in his New York studio. Whatever the case, this absurd coupé was as ugly as the standard BMW was elegant.

Much more visually successful, but rather ignored at the time, was Giovanni Michelotti’s re-skinned 507. Shown at the Turin show in October and November 1959, it disappeared into obscurity for 25 years, spent some time in America, and has now settled in Munich as part of BMW’s Mobile Tradition collection. 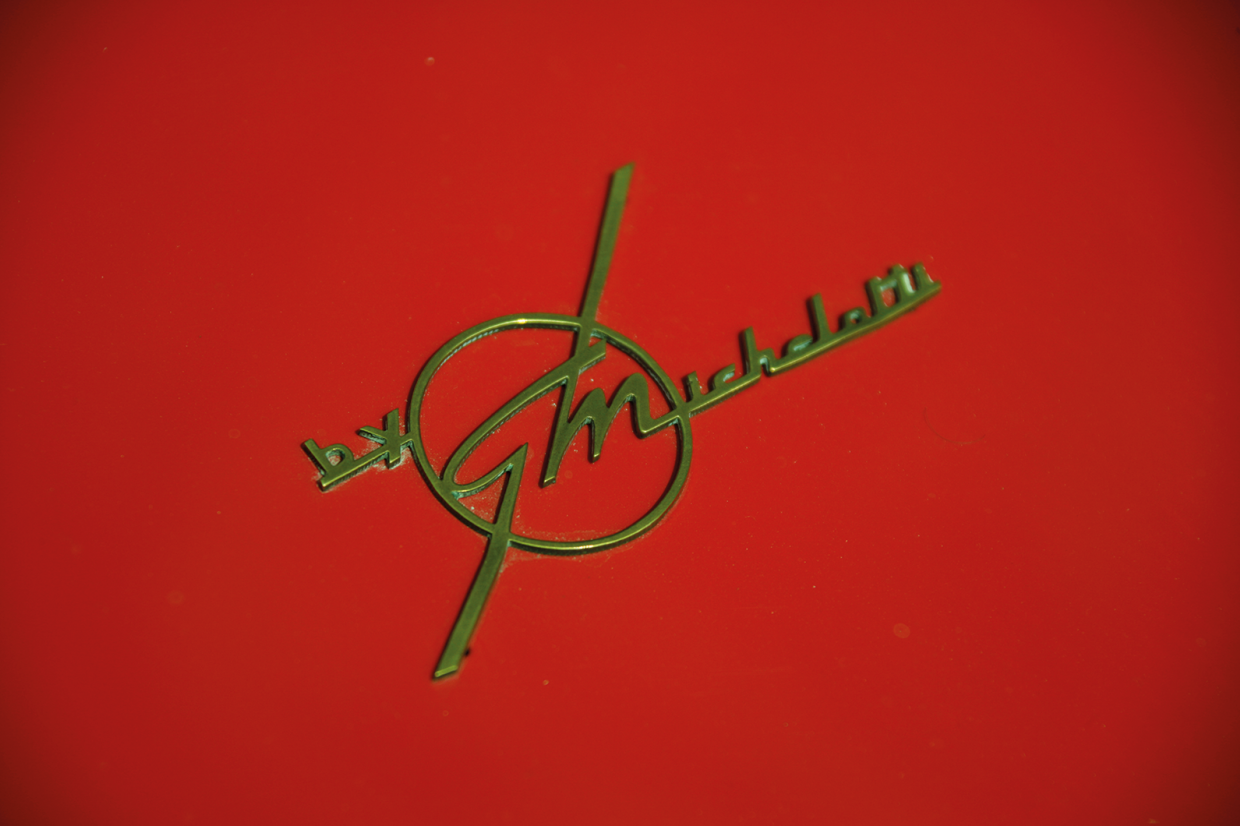 Michelotti was one of the most prolific stylists of his generation, active from the ’40s up to his death in 1980. To the British he will be best known for his Triumphs. From the cheerful Herald to the suave Stag, he brought Italian glamour to otherwise gloomy British streets.

Michelotti knocked out so many styles for so many different firms it would probably easier to list the makes he didn’t work for. He could turn his hand to anything: one-off exotica for international royalty to mass-market family saloons.

Munich isn’t far from Turin and BMW would have been well aware of Michelotti’s output yet, unlike Bertone and Pininfarina, he was more or less a one-man band who could style a car and organise the construction of a prototype, but had no facilities to build bodies in series.

There is, of course, a long tradition of Italian-styled Bavarian cars. Touring of Milan had famously bodied the streamlined 328 works racers and, post-war, most of the Italian coachbuilders worked on its chassis with varying degrees of aesthetic success.

Michelotti worked with Bayerische Motoren Werke on prototypes well into the ’60s, but the influence of the Latin houses lessened as BMW’s in-house talent grew in confidence and stature. 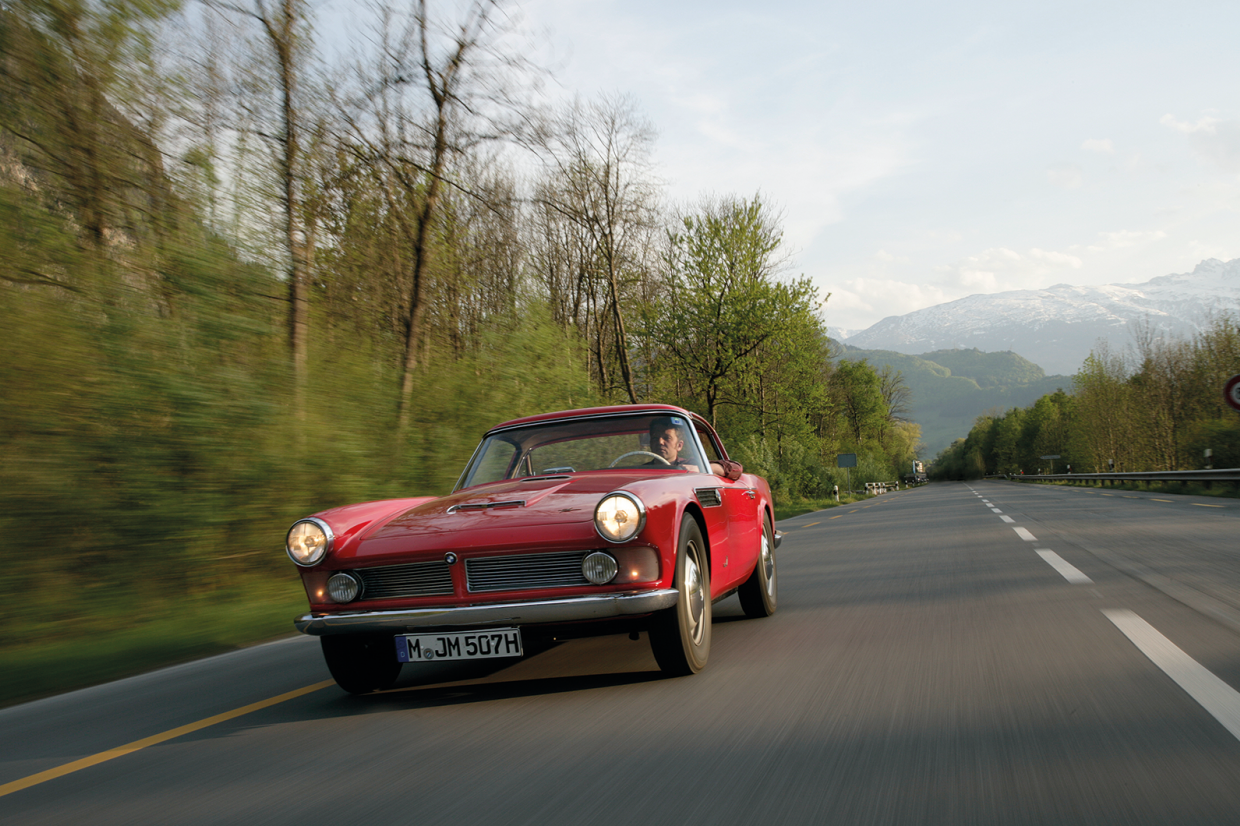 There is no suggestion that his one-off 507 was a commission from BMW (although Michelotti was already a consultant, working on the shape of the 700) or that it was ordered by an individual. Michelotti merely wanted to do a more modern interpretation that he hoped would catch the attention of BMW management.

He began working on drawings in 1957 and, by July, had an initial draft that looked pretty close to the finished car, yet his original idea was to build a coupé rather than a roadster with a hardtop.

Via the Italian importer, Alessandro Paolini of Casa dell’ Automobili, Michelotti bought a bare chassis from BMW, ‘70184’, which was delivered to Turin on 11 September 1958.

The shell was built in Modena by the Ferrari body maker Sergio Scaglietti and was mated to the chassis at the premises of Alfredo Vignale in Turin. 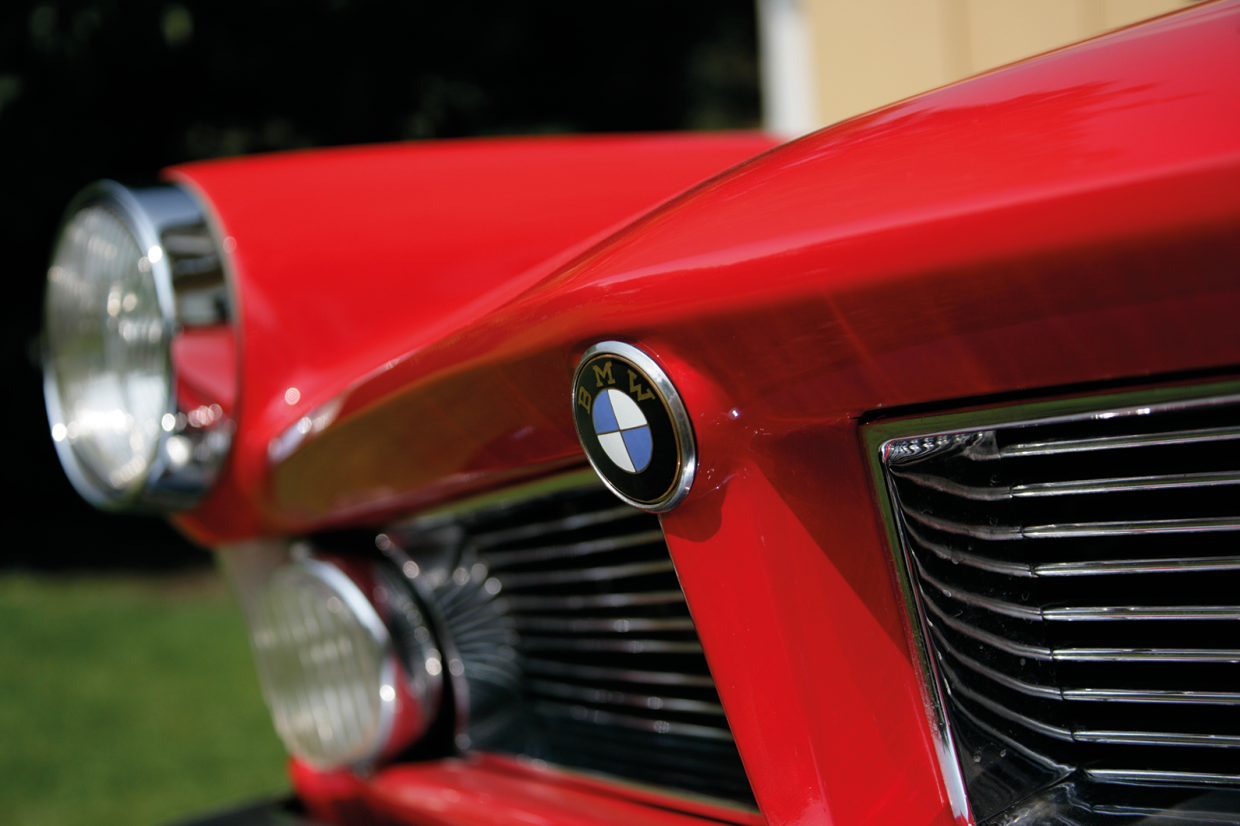 Presented at Turin, the car was badged simply BMW 3200. Since acquiring the car, BMW has struggled with what to call it, but has settled on 3200 Michelotti Vignale, thus acknowledging the stylist and the firm that finished the body.

There is a large ‘by G Michelotti’ script on the nose, plus discreet ‘Vignale’ badges on both front wings. Were it not for the three roundels, you could easily mistake it for a Maserati.

At the time of its debut, much was made of the fact that it was DM10,000 (L7.22m) cheaper than a factory 507 in Italy, where labour was cheap, but import duty rather distorted this figure.

Today the car is solid bright red, but the black-and-white shots of it at the show suggest something darker, possibly a reddish-brown metallic.

Detail body furniture appears to be of local rather than BMW origin yet it’s hard to identify from what. The full-sized chromed wheel discs have also disappeared at some point over the past 48 years, replaced by small hubcaps like you’d find on a 502. Inside, the original light-coloured leather has been replaced with black.

The car is thought to have been sold to an Italian businessman, but was not seen publicly again until 1986 at Christie’s Beaulieu sale, still with only 10,315km on the clock.

Davis, who already had an impressive collection of exotica (including a 507), was said to have been a bit disappointed to find, when it turned up in California, that his new 507 was the Michelotti/Vignale car. He wanted a standard one with low miles. Yet he had it restored anyway and kept it until 2001 when it was acquired by the Blackhawk Collection in California.

Klaus Kutscher of Mobile Tradition spotted the Michelotti at Pebble Beach in 2004 with a discreet ‘for sale’ sign in the window. It was purchased for the collection and made its German debut at Techno-Classica Essen in 2005, alongside the 507 prototype. 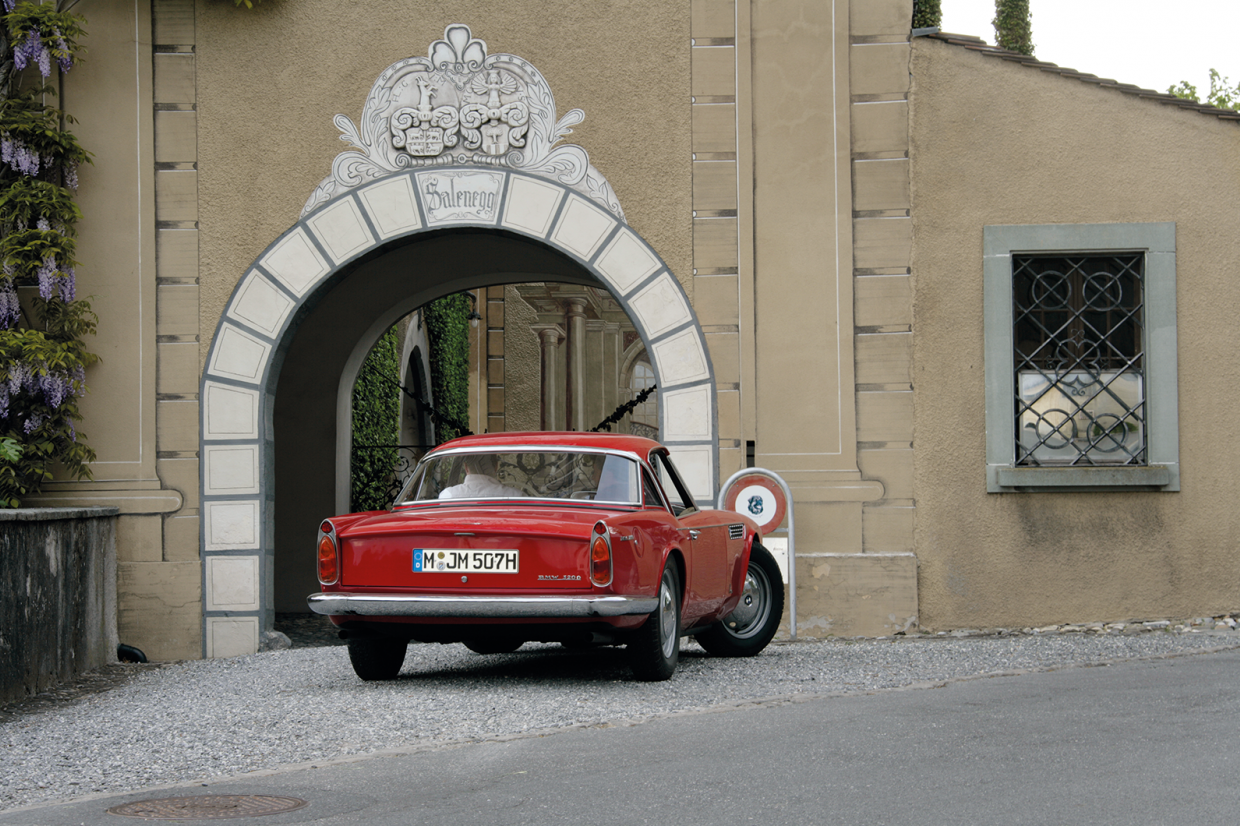 I encountered the Michelotti 507 at Concorso d’Eleganza Villa d’Este last April [2007] as part of a special Giovanni Michelotti tribute display. It was also one of a group of six Mobiel Tradition cars that were going to be driven, after the event, from Como to Zurich.

I was a bit too polite outside the hotel on the Monday morning to get my bottom into the Michelotti car initially, but ended up with a standard 507 – hardly a chore. After lunch in Soazza, I excused myself early and staked my claim to it for the remainder of the day.

The first impression was that the driving position is pretty dire, but then it is a prototype. You end up hunched over the big white steering wheel and I couldn’t see how to move back: there was nowhere for the (substantial) seat to go.

Although the wheel is recognisably V8 BMW, the dash was rationalised, with instruments grouped in a single oblong pod surrounded by toffee-coloured switchgear.

With the hardtop in place, the Michelotti gets stuffy inside at low speeds, but the small rear quarter-windows can be hinged open for ventilation. Electric front windows add a touch of decadence missing from even the factory-bodied 507, a roadster not noted for its austerity.

Looking through the quite steeply raked ’screen, the main thing that draws your eye is the way that the windscreen wipers are tucked away under the edge of the bonnet. 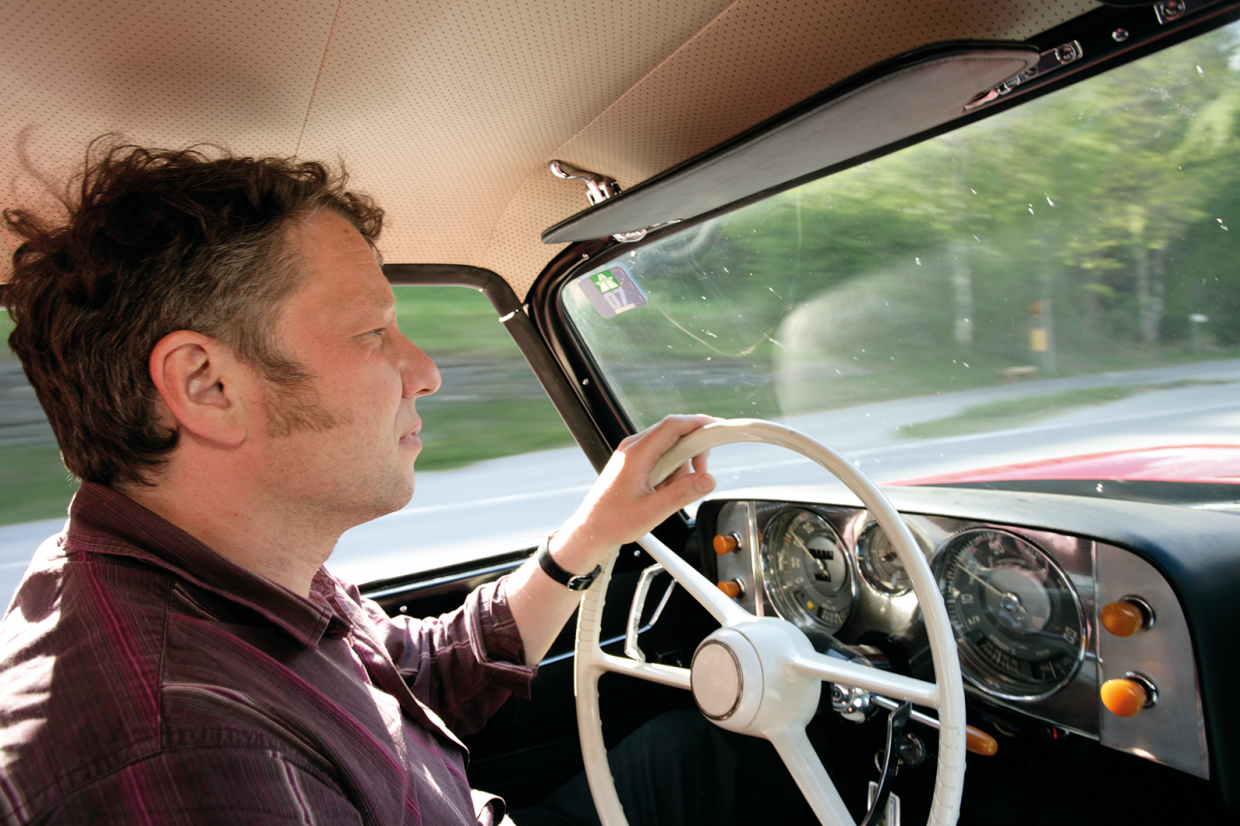 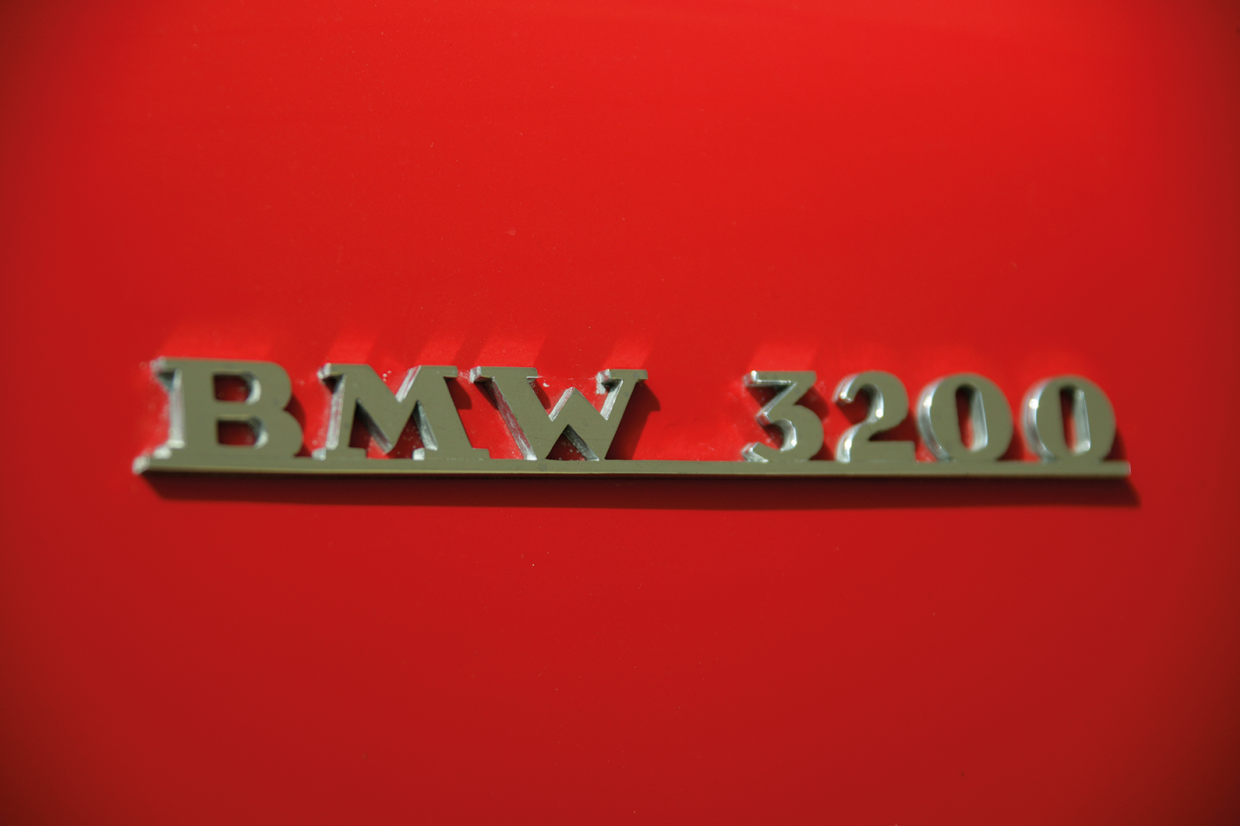 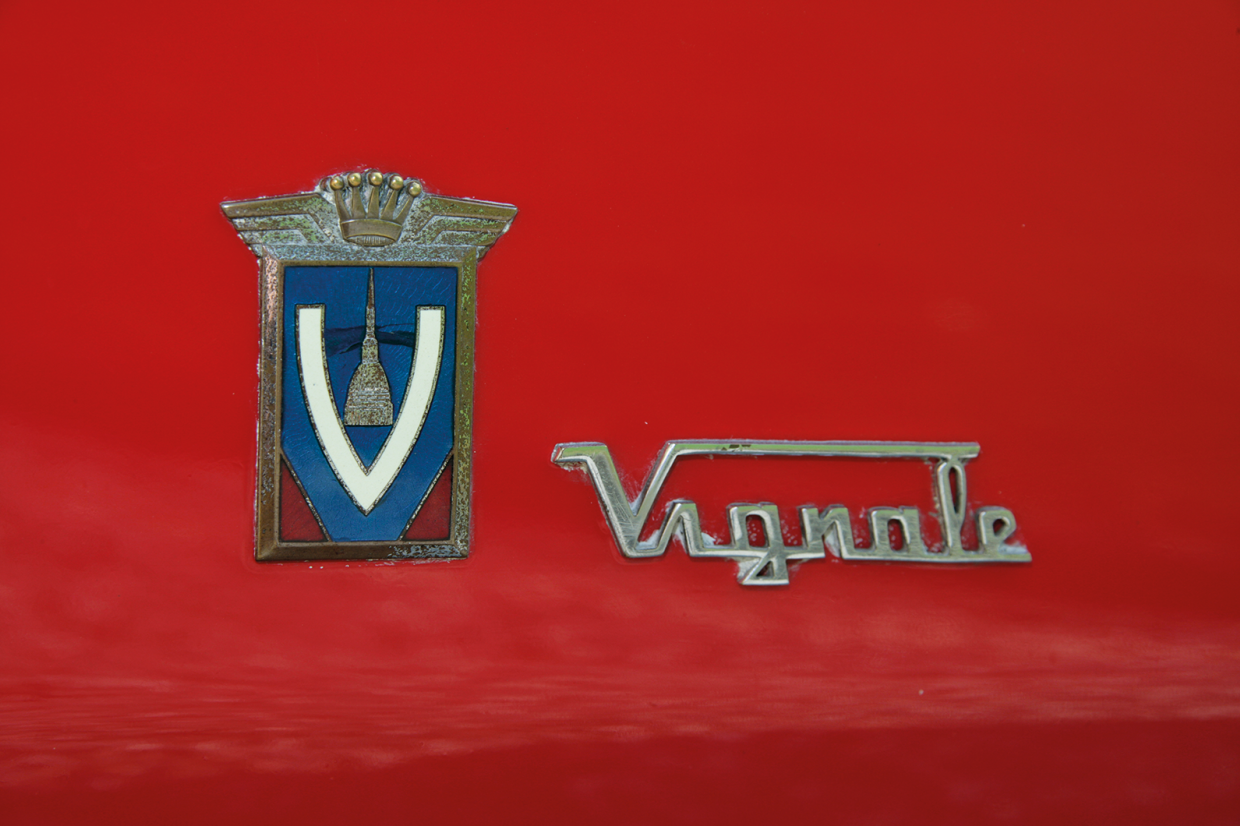 Mechanically, the car only differs from an early 507 in having front discs, but these were standard from ’57.

It has the same light, easy nature on the move with a supple ride and smooth controls. The standard exhaust is fairly throaty but for some reason the Michelotti car makes an outrageous din, more like a posse of Hell’s Angels on the rampage than a mild-mannered and refined 3.2-litre, 150bhp V8.

Lusty as it sounds, though, the Latin-bodied one-off did not feel as brisk to me as the German original. This might be down to a weaker engine, more weight (Italian coachbuilders used lead by the bucket-load) or simply because it had the optional longer axle ratio, making it more of a cruiser than a sprinter.

Whatever the truth, you have to keep your foot down to maintain real momentum and use the four-speed gearbox where the action is smooth, if not always easily defined, and the ratios can feel wide.

Lunging along the straights, nosing keenly into curves with that big wheel feeding back faithfully, you can’t help but marvel at how BMW got such inspiring results from apparently unremarkable components.

Yet the way a car like this drives is a bit irrelevant really. The Michelotti 507 is a beautiful car in its own right and was not a wasted effort as far as its designer was concerned: he simply reprised the basic outline of the car, particularly the tail, for his 1961 Triumph TR4.

Poised and svelte on its big wheels, the BMW might have worked as an even more civilised variant, its modish clipped tailfins framing a longer, deeper boot. It’s not such a crowd-pleaser as the Goertz 507, but is a sharp-edged, elegant and fascinating counterpoint to it.

Bodies of the gods: the greatest Italian coachbuilders 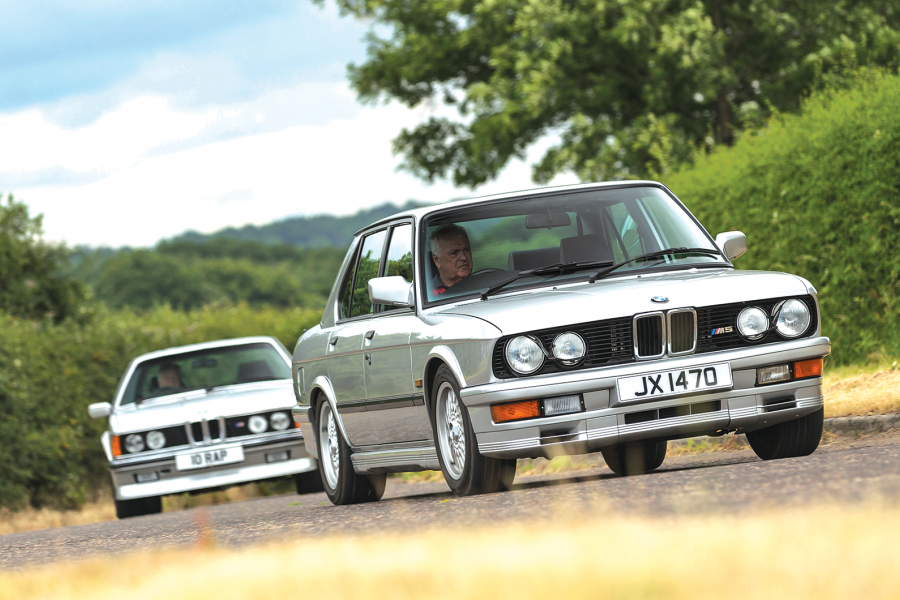 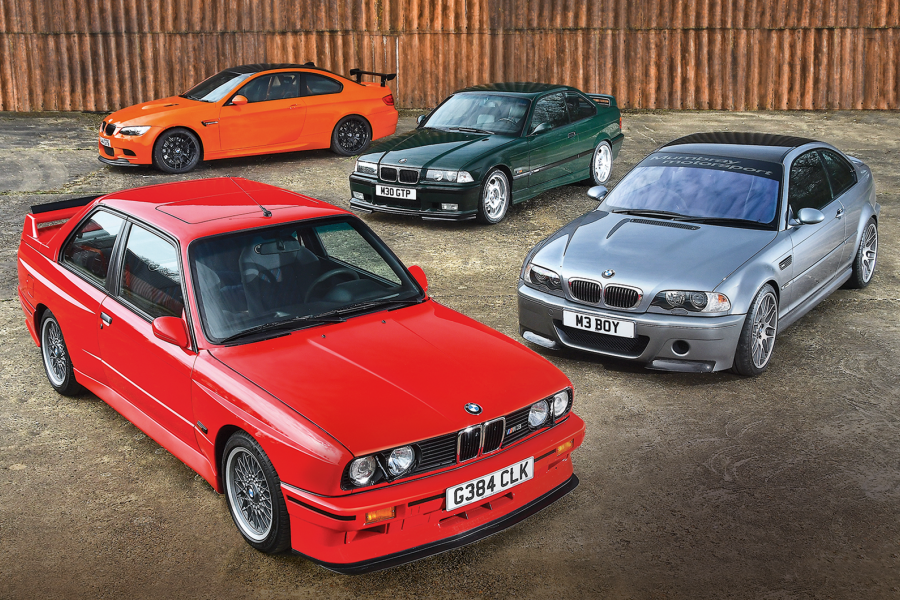 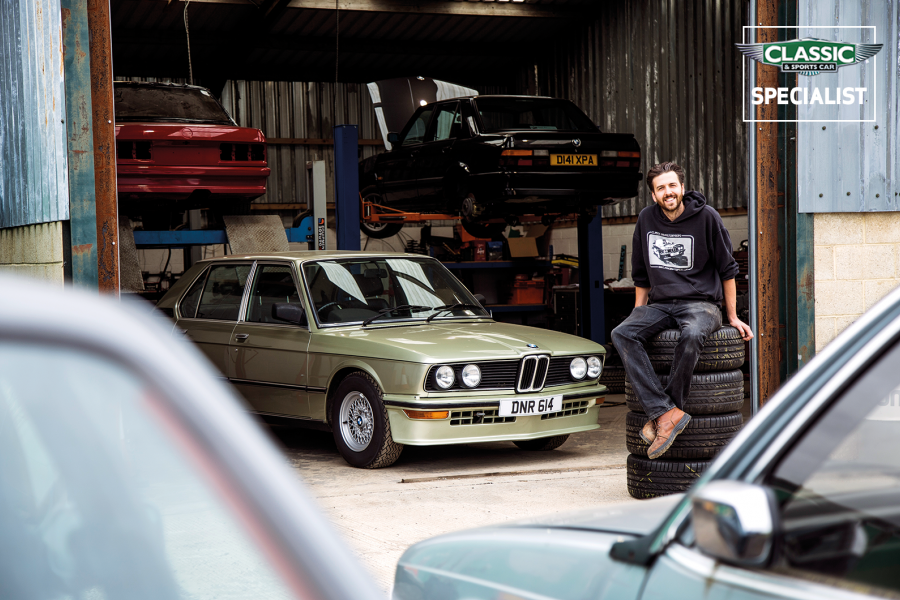 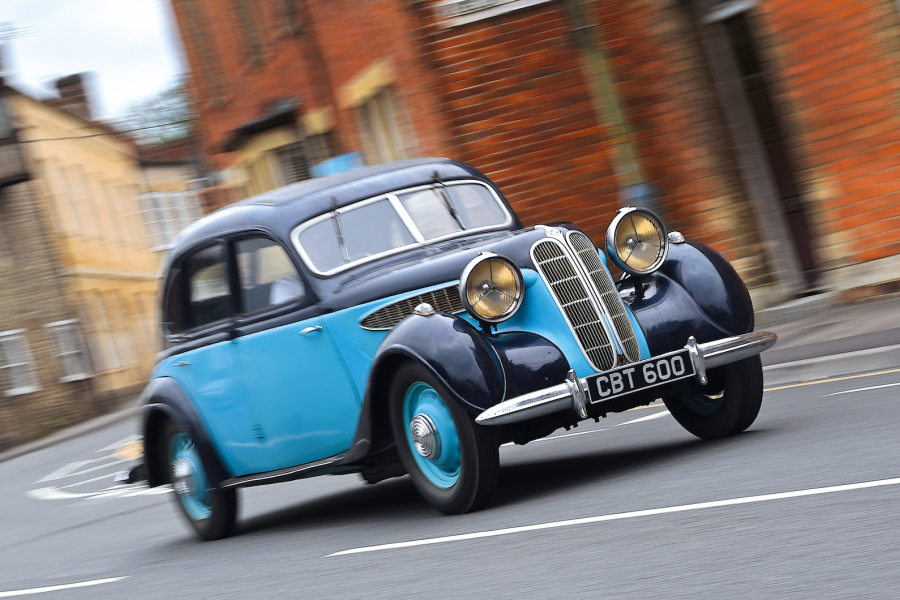