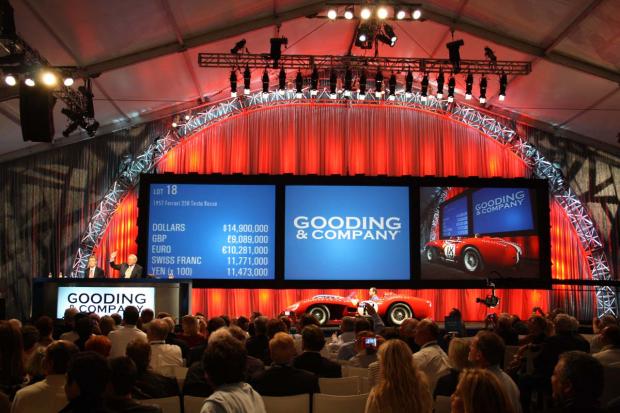 A Ferrari 250 Testa Rossa rewrote the history books when it went under the hammer for a staggering $14.9m (£10,281,000) at Gooding & Co in Monterey, California on 20 August. The result smashed the existing record of €9,020,000 paid for a car at auction held, fittingly, by another Testa Rossa: chassis 0714TR, which rival sale house RM sold at its Ferrari auction in Maranello in May 2009.

Boss David Gooding was understandably upbeat about the result: “A lot of people have been asking me about the impact of the recent stock-market crash on the classic car world – well there’s your answer.”

Gooding’s record car - chassis 0666TR - was the prototype 250 Testa Rossa and comes with enviable period racing provenance and continuous history, including a first in class at the 2006 Pebble Beach Concours d’Elegance.

It sold to a phone buyer on the first night of Gooding’s two-day sale after a protracted duel between a the winning bidder and a rival amusingly located just outside the auction tent. Bidding opened at a heady $10m, with the final increment of $100k sealing the deal for the phone buyer who will likely have to fork out a further $1.49m to cover the buyer’s commission.

The result will have been a blow to RM, which failed to shift a similar car at last year’s Monterey sale and which had hoped to post the top result for this year's Monterey extravaganze with the star of its Lyon collection of pre-war Mercedes-Benz cars: the 1937 540K Spezial Roadster.

The ex-Paris Salon show car sold for $8.8m during the same evening after a new bidder nearly overturned a stand-off between a phone buyer and a bidder’s agent in the room at $8.3m.

In the end, however, the absent bidder upped his game to allow his representative to clinch the deal with an $8.8m bid (£5,390,000 at current exchange rates), a result that comfortably topped the £3,905,000 RM achieved for an identical 540K from the collection of F1 mogul Bernie Ecclestone at its inaugural London sale in October 2007.

Get 2-for-1 London Concours tickets exclusively with C&SC

One for the road: the unique Tojeiro-Climax