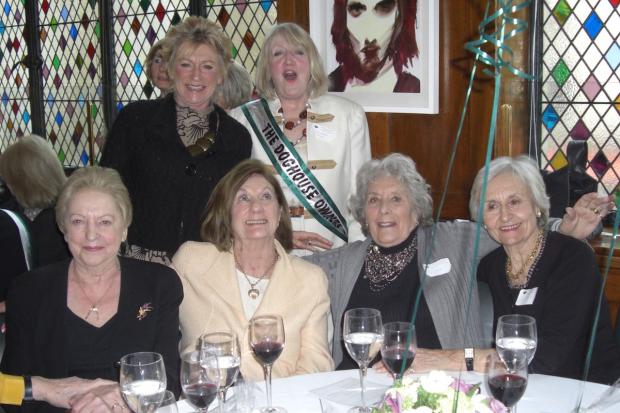 Grand Prix royalty from the '50s,' 60s and '70s bearing the names of Brooks, Hill, McLaren and Stewart were joined by 60 members and friends of the Women's Motor Racing Associates Club for an exclusive lunch at The Ivy, in the heart of London's West End, to celebrate the WMRAC's 50th Anniversary.

The club, known as The Doghouse Owners' Club was founded on 7 February 1962 by a group of highly influential ladies. Under the chairmanship of Sheila Van Damm, the committee comprised Mrs Colin Chapman, Mrs John Cooper, Mrs Gregor Grant, Mrs Graham Hill and Mrs John Webb; the acting secretary was Miss Peggy Sandberg (Mrs Peggy Rowe). Bette Hill, who was present at the inaugural committee meeting, was clearly delighted with the Club's 50th Anniversary celebrations on Tuesday 7 February 2012 in London.

"It's brilliant! Absolutely marvellous to see so many here today," Bette said as she greeted members keen to talk to the Club's Founding President and former Doghouse cabaret star.

Sir Stirling Moss, who wasn't at the dinner, admitted: "For the first time in my life, I can sincerely say that I regret not being in 'The Doghouse'! Wishing you all a fabulous time at The Ivy."

Following her welcome speech, Doghouse Chairman, Leonora Hill read out a message from the Club's new Patron, Jodie Kidd: "I am so sorry I couldn't join you for your lunch today. I would have loved to have been there for my first Doghouse event. Sending my best wishes to everyone, I am absolutely thrilled to be joining as the new Patron, especially on the 50th anniversary – what an achievement!"

"As the BRDC is the 'Who's Who' of British Motorsport, so the Doghouse Club is the equivalent on the other side of the gender fence," said Ganley, "with many famous names still involved and with many of you so well connected within motorsport circles.

"Of course, the motor sport scene is very different now compared to those early days, when many of the British Grand Prix driver's wives were members. I'm sure you had a lot more fun, but it was also a more dangerous sport and the Doghouse provided a vital role of support and camaraderie for the wives, especially when tragedy struck.

"Fortunately the sport is far safer now and I have to praise the work of Sir Jackie Stewart, who pioneered safety improvements, often with little support from any drivers like myself, but he stoically continued to champion a safety campaign. So we have much to praise him for today."

Doghouse President, Shirley Procter thanked Howden for such an enjoyable talk, presented him with an exclusive pair of silver Doghouse Kennel cuff-links and announced that he was now an Honorary Member of The Doghouse Owners' Club, the only man ever to hold that distinction.

Founding Vice-President, Patty McLaren-Brickett added: "It's been a fantastic turn-out. Absolutely terrific and a great way to celebrate our 50th Anniversary!"

Visit the club's website to learn more about it and see how much it has done for charity in the past 50 years, particularly from the biannual Doghouse Ball, attended in its heyday by the likes of Jim Clark, Graham Hill, Stirling Moss.