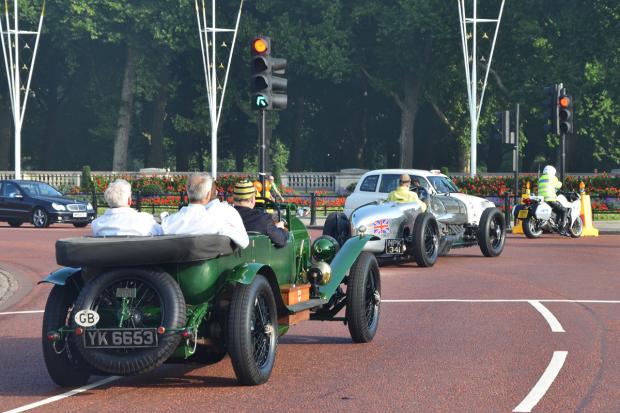 Early morning commuters today were stunned by the dramatic sight of some of the world’s greatest cars convoying down The Mall, headed by the spectacular Napier-Railton (main image). At the helm of the 24-litre Brooklands Outer Circuit record-holder was HRH Prince Michael of the Kent, the patron of the St James’s Concours of Elegance which is staged this week at Marlborough House from 5-7 September.

Eight groups motored past Buckingham Palace to the new site in St James's and lucky bystanders were treated to an amazing free parade of motoring legends, including the Le Mans-winning Porsche 917 (above) and the 1923 143mph Land Speed Record Delage.

The prestigious event has attracted top international collectors, who enjoyed the special police escort past London’s famous palace and down The Mall. Few cars turn heads quite like the 2006 Pebble Beach winning-Horch of Robert Lee, with its flamboyant Voll & Ruhrbeck Sport Cabriolet body, but it has competition at St James's with the UK debut of the outrageous Mercedes-Benz 500K Erdmann & Rossi Streamline Roadster built for Saddam Hussein (above).

The early morning convoy also featured several magnificent Bentleys, including the Gurney Nutting ‘Sportsman Coupé' (above) that was built for millionaire 'Bentley Boy' Woolf Barnato  and shipped over from America for the concours by owner Bruce McCaw. For many years, this rakish Speed Six fastback was believed to be the 'Blue Train’ car.

The judging at St James is different to most concours, with only entrants voting for their favourites, and last year’s victor Jon Shirley has been hotly tipped to make it a double win with the ex-Roberto Rossellini Ferrari 375MM Scaglietti Berlinetta (above). Other treats for Ferrari fans included Clive Beecham’s sexy 275GTB/4 NART Spyder, one of the 10 highly prized Pininfarina beauties.

Contrasting with the mint rebuilt coachbuilt greats were several unrestored gems, including a rare outing for the 1929 Monaco Grand Prix-winning Bugatti Type 35B (above), which has been amazingly preserved by long-term owner Edmund Escudier and now lives in Germany.

Also looking fabulous in the early sun was Dirk Libeert’s Siata 208CS Balbo Berlinetta (above), which was making its show debut. Formerly one of the ‘Sleeping Beauties’ from reclusive collector Michel Doraz’s hoard in rural France, this 2-litre V8-powered exotic has now been meticulously detailed and restored to original maroon.

“It was one of Doraz’s favourite cars and he stored it in his farmhouse,” said Libeert. The Balbo formed part of an impressive Fiat ‘Otto Vu’ group featuring Bruce Vanyo’s Vignale Mille Miglia and Jan de Reu's Zagato Berlinetta.

The concours is open to the public on 6 and 7 September from 9:30am-4:30pm. A special Lamborghini 50th Anniversary display will arrive at Marlbrough Road on Saturday at 12:30pm.

More photos from the event below: