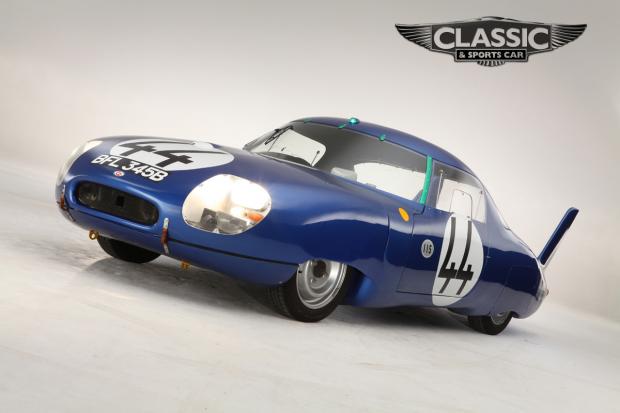 Charles Deutch's Le Mans streamliner had a drag coefficient of just 0.12, says Richard Heseltine, and it could nudge 140mph from only 848cc of Panhard saloon flat-twin.

You can’t help but stare in whimpering incomprehension, too mesmerised to even blink. With an air of moustache-twirling villainy, our hero flexes the throttle pedal, firing another barrage of angry air-cooled buckshot out of the lone exhaust pipe. It’s truly, epically loud, to the point where you start giggling uncontrollably, the alternative being to merely black out. This wellspring of weirdness simply blows the mind and assaults your ears like no other car, each staccato pop and bang being slightly more painful than the last. There’s deafening and then there’s this CD-Panhard Le Mans veteran.

With the benefit of hindsight, starting such a car in an enclosed space wasn’t that bright an idea, but it had been a long day and it would have been rude not to. A point of view no doubt lost on those inhabiting the four floors of office space above the studio – and the patrons of the pub garden opposite for that matter.

But we all like to have preconceptions affirmed and this gloriously left-field machine is everything that you expect it to be and more. Built to contest the 1964 running of the round-the-clock classic, its wind-cleaving outline expressly established with the Hunaudières straight in mind, this car is just so, well, French.

But there’s more to this fascinating curio than mere novelty status alone. You could argue that the CD-Panhard is a forgotten pioneer, the use of computational calculations involving everything from the effect of crosswinds to suspension flexibility. It culminated in a radical streamliner that pushed the boundaries of what was possible and what was permissible. This was the antithesis of the ‘chalk marks on the floor’ approach to racing-car design, and it genuinely functioned as predicted. Consider this: such was its designer’s mastery of airflow that the car has a drag coefficient of just 0.12. By way of comparison, a Ferrari 458’s cd is 0.32. The LM64 also managed 137.5mph on fewer than 80bhp. And that was 46 years ago. On paper, it’s genuinely remarkable. Off paper, even more so. The depth of thought invested here is toweringly impressive even now.

Which is to be expected when you consider the brains trust behind it, principal among its number being Mr CD himself, Charles Deutsch. This remarkable man’s standing in motor sport – in so many arenas – belied his diminutive 5ft 3in stature, his desire to ‘create’ being evident from the get-go. Born 20 or so miles east of Paris in September 1911, Charles’ passion for design was inherited from his father. Originally a cartwright, Deutsch père had forged an early interest in the newfangled automobile and in time began creating his own coachbuilt bodies to order.

Working alongside his father, and mastering traditional coachbuilding practices, young Charles supplemented his on-the-job training by reading any text he could lay his hands on that might improve his understanding of vehicle dynamics and technical theory. On leaving l’École Polytechnique in 1935, he began his professional life as a civil engineer for the government’s bridges and highways authority, the Ponts et Chaussées. Deutsch would subsequently rise to become overall chief engineer, a position that he would retain until ’66, by which time he had long since established his parallel career as a car designer and manufacturer.

His rise to prominence in motor sport materialised in tandem with that of sometime friend René Bonnet. After Deutsch’s father died in ’29, 18-year-old Charles had taken over the reins at the family carrosserie. Three years on, though, the pressure of juggling his studies with running a business was starting to show so he and his mother sold La Maison Deutsch – the company rather than the property – to Bonnet. The newly installed tenant promptly turned the ground floor into a Citroën agency and general garage while his landlords continued to live upstairs.

With a back story that involved enduring a lengthy – and unnecessary – spell wearing a body cast due to a misdiagnosed back injury, Bonnet had eked out a living making shawls prior to taking on his sister’s faltering commercial garage after her husband had died. Bonnet transformed it into a thriving business, displaying natural salesmanship, only for a new brother-in-law to enter the picture, hence the decision to go it alone at La Maison Deutsch.

Predictably, Bonnet and Deutsch’s shared love of cars – allied to the former’s desire to compete trackside – led to the creation of a purpose-built racer. The duo worked hand-in-hand on a Citroën Traction Avant-based roadster, the DB1, which took 17 months to develop and made its debut in March 1938. A second car, a beautifully sculpted coupé, was then laid out for Deutsch’s personal use, but it was completed at a later date due to the Nazi occupation.

A vaguely formalised arrangement was reached after the end of hostilities, with DB becoming a recognised marque, even if Deutsch’s role was complicated by his position as a civil servant. In theory he wasn’t allowed to engage in remunerative, non-governmental activities: he was effectively a shareholder in a firm that had no shares. Except that this business existed largely as a means for filling out a name on race entry forms, a sister company in which Deutsch maintained only a nominal stake being the one that actually made DB products. The founders’ business relationship was conducted on verbal understandings and handshakes, a situation that could only end in tears.

It did, but not before a period of sustained glory. With the first Panhard-powered creation appearing in 1949, success in small-capacity classes followed, as did virtual hegemony of the Index of Performance prize at Le Mans. Panhard-engined cars dominated during the early part of that decade, with the Monopole make winning from 1950-’53. The Dyna saloon’s unburstable air-cooled flat-twin proved a fine basis for a race engine, with its roller-bearing crank, one-piece conrods, light-alloy cylinders with integral heads and narrow-angle overhead valves actuated by torsion-bar springs.

The Index prize was of particular significance on the home front, the patience-testing regulations purportedly devised to encourage development of the ideal touring car. DB would make this accolade its own, taking maiden honours in ’54, with Elie Bayol and Bonnet driving. In 1959, the Index changed tack to one of Thermal Efficiency – allegedly in response to the Suez Crisis – with a car’s speed, weight and fuel consumption all being key constituents. That season DB claimed the award after managing 25.69mpg over 24 hours on just 744cc.

But the marque was already tilting towards oblivion. Despite a symbiotic relationship with Panhard, which included ‘Panhard-DBs’ being sold via its dealerships – plus a strong bond between Deutsch and Jean Panhard – matters came to a head when Bonnet concluded a deal with Renault to build cars using its running gear. Depending on whom you believe, Deutsch hadn’t been consulted and he was stunned to receive a letter from Bonnet’s lawyer in early ’61 outlining the dissolution of their partnership. The exact reason for the split is somewhat clouded, although Panhard’s rocky financial state may have been a contributing factor. Whatever the truth, what followed was all-out war between the former collaborators at a venue where together they had enjoyed such great success: Le Mans.

Having seemingly reached an agreement with the state, Deutsch became a manufacturer in his own right. In March ’62, CD was contracted by a still smarting Panhard to build five new cars for an attack on that year’s 24 Heures, which was barely three months away. Not only did the firm beat the René Bonnet marque to the Index of Performance prize and 850cc class honours, but it also claimed the GT Championship of France. Roadgoing replicas went head-to-head with (pre-Matra takeover) René Bonnet offerings, with around 150 being sold in 1963.

It couldn’t last. The Panhard flat-twin was struggling to keep pace with newer, more rev-happy units. For 1963, CD returned to Le Mans with a DKW-engined challenger, its profile being the genesis of the car you see here. For the following season there was a return to Panhard power, the extraordinary LM64 featuring a silhouette unlike any other at the time.

Just two of these cars were constructed, the spectacular, ultra-low-drag outline being largely the work of Lucien Romani and Robert Choulet (whose subsequent Matra MS640 design bore a striking similarity to the CD). Instantly identifiable by its stabilising fins, almost as intriguing was the use of an undertray with a central ‘tunnel’ that channelled airflow to generate ground effects. Not forgetting the diffuser in place to accelerate air beneath the car.

There was one slight problem-ette, however: cars with a displacement of less than 1 litre were no longer allowed to participate in the great race, which was something of an obstacle for the 848cc Panhard unit. No problem. Deutsch concluded that the timely addition of a Sferma supercharger would make it eligible for the sub-1200cc class under the equivalency formula. Et voilà, 848cc multiplied by 1.4 equals 1187cc.

Weighing in at just 560kg, and packing 78bhp at 6750rpm, the LM64s were quick. Unfortunately, they didn’t go the distance. The car featured here, driven by Alain Bertaut and André Guilhaudin, was eliminated in the 10th hour with engine problems. Its sister entry retired two hours later with gearbox issues.

Neither car would race again in period. For ’65, CD switched allegiance to Peugeot as Deutsch retired from his day job to concentrate on his SERA-CD design consultancy, which would in time be involved in shaping such icons as the Porsche 917 Langheck and Alfa Tipo 33 TT12, and continues to this day. Deutsch also took time out to write several works on mathematical simulation in vehicle dynamics. He died in 1980.

Retained by SERA-CD until 1981, LM64/2 subsequently became a museum piece at Le Mans and Adrien Maeght’s collection at Mougins. In 2004, it was sold on again before arriving with current owner Tim Moore a year later after the two cars had finally been reunited at Rétromobile. Moore bought the CD because he was captivated by its design. The car is beautifully original, too, having received only minor recommissioning since its days as an exhibit. It’s immediately evident – just from pushing the glassfibre-bodied machine around the studio – that it’s incredibly light and there’s little rolling resistance; the car originally wore experimental Michelin rubber. And it’s such a compelling shape, the roofline being barely 1070mm (42in) off the deck. It’s also a lot shorter than you might imagine, measuring just 4250mm (14ft) overall.

Irrespective of its slippery shape, this machine also matters because 1964 was the last year that Panhard was represented at Le Mans, the marque being assimilated by Citroën a year later and on the embalming table by ’67. A sad demise for a firm that had been involved in motor sport ever since the idea of campaigning horseless carriages was first mooted. While it didn’t cover itself in glory at La Sarthe, this outlandish device upheld both Deutsch and Panhard’s honour by letting its inventiveness do the talking. Although screaming would probably be closer.

This article was originally published in the August 2010 issue of Classic & Sports Car magazine, which retains the copyright to all words and images. Click here to see the terms and conditions.