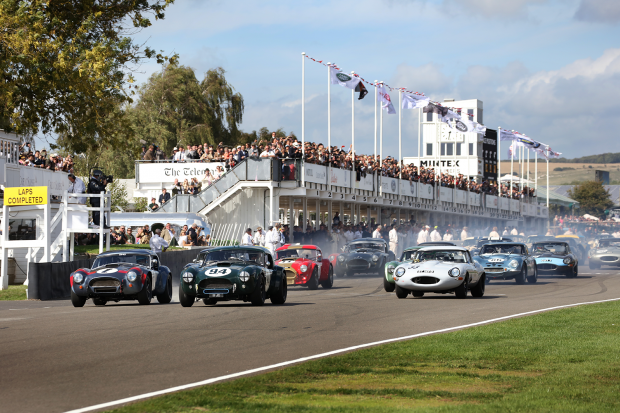 You look forward to it all year, then before you know it the final day of the Goodwood Revival dawns.

With the estate bathed in late-summer weather, early arrivals enjoyed off-track delights such as the Earls Court Motor Show, the Duke of Richmond’s incomparable set-dressing and, of course, the packed classic car park and jaw-dropping paddocks.

Competition itself began at 10am, with the year’s ninth contest, the Chichester Cup: a 20-minute race for rear-engined Formula Juniors with disc brakes of a type that raced until ’63. 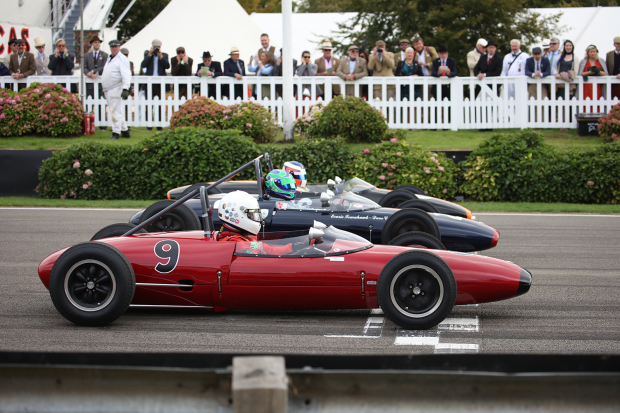 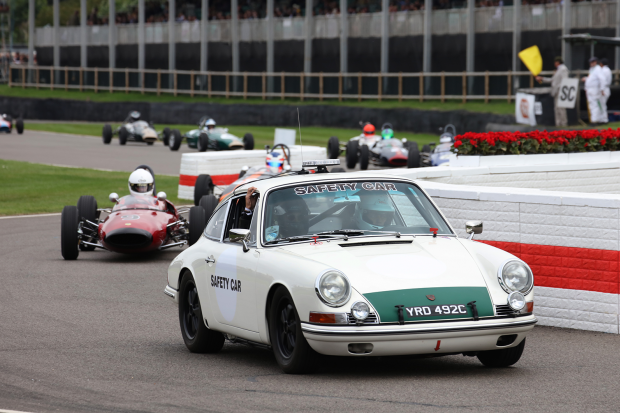 In a fantastic contest, Andrew Hibberd (Lotus-Ford 22) rocketed off pole, Cameron Jackson (Brabham-Ford BT2) challenging in his first race at this track.

Nick Fennell’s stranded Lotus-Ford 27 brought out the safety car and when green-light racing recommenced, Jackson stuck it down the inside at Madgwick to take the lead.

There was another moment for Hibberd at the end of that lap, when Michael O’Brien (Lotus-Ford 22) mounted Hibberd’s rear tyre on the exit of the chicane.

But Hibberd wasn’t deterred and sliced past Jackson at Woodcote on the penultimate lap, and despite the leaders encountering traffic, causing the backmarker to take to the grass, Hibberd won a decade after his father did the same, 0.5 secs from Jackson. 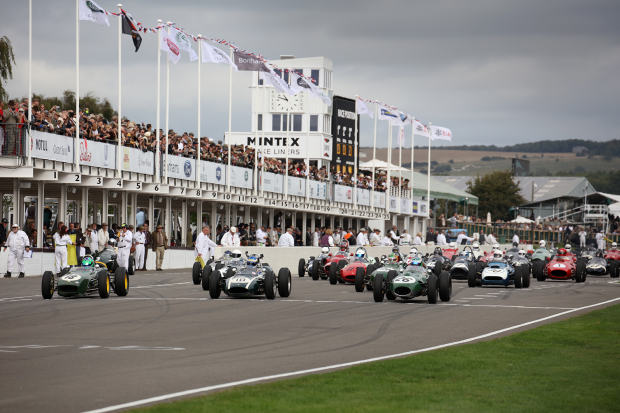 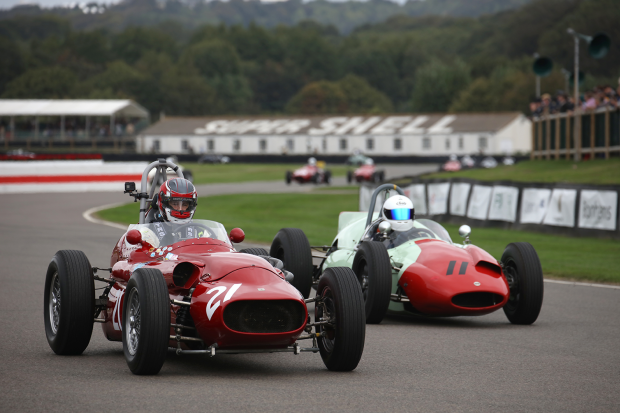 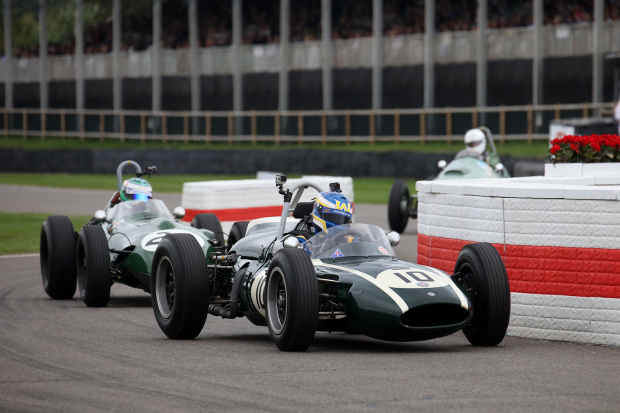 Next was the Richmond and Gordon Trophies race, a battle for front- and rear-engined 2.5-litre Grand Prix cars from 1954-’60.

Sam Wilson, in the ex-Jim Clark and Innes Ireland Lotus-Climax 18, fired off pole but then pulled off and retired, Will Nuthall (Cooper-Climax T53 ‘lowline’) taking the lead instead. The experienced Nick Padmore (Lotus-Climax 16) then passed him at Fordwater, before Nuthall got back in front.

Oil on the track brought the safety car out and in the few laps that remained after that, Padmore had the advantage from Nuthall, the pair pulling away from the chasing pack.

In the close fight for third, Rod Jolley (Cooper-Climax T45/51) came out on top and there was more drama when leader Padmore missed a gear at Lavant on the last lap, just a few corners from home, gifting Nuthall victory. 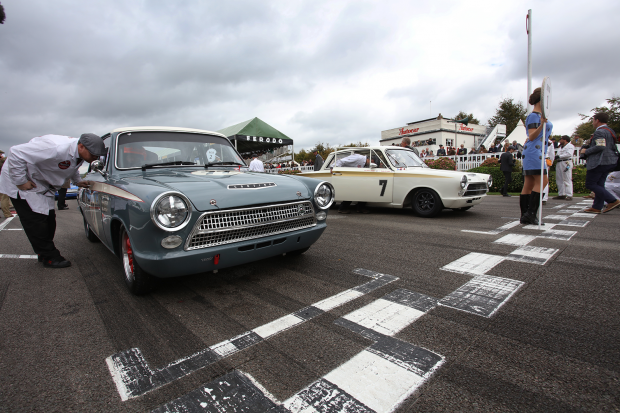 Then everyone took a deep breath ahead of part two of the St Mary’s Trophy, the owners/‘amateurs’ taking their turn behind the wheel. 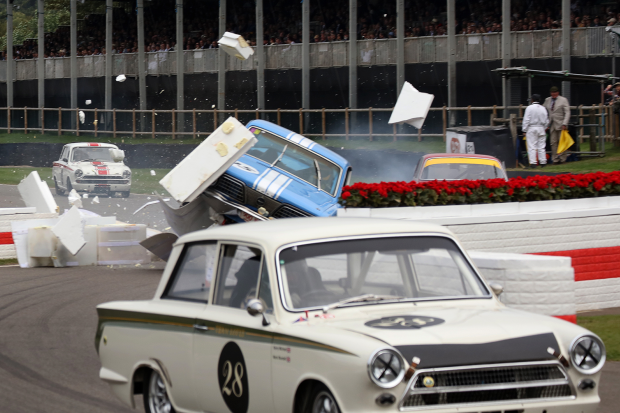 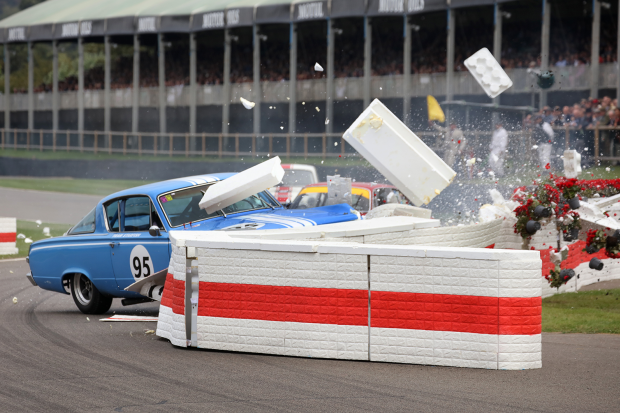 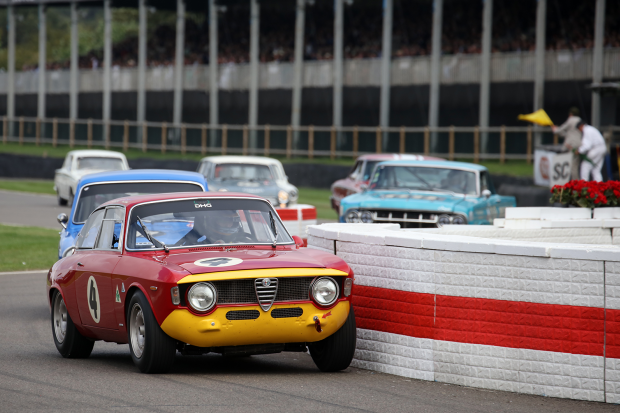 Jordan was again on pole for the restart, of what was now a 10-minute sprint, but it was Ambrogio Perfetti’s Cortina that led into Madgwick, as Nick Swift’s Mini rallycrossed around the outside, 19-year-old Olivier Hart (Alfa Romeo 1600 GTA) chasing and soon taking the lead, Wills third.

A safety car caused by Peter Chambers barrel-rolling his Cortina at No Name/St Mary’s bunched the field up, but Hart retained the lead on the restart and took a popular win.

Perfetti was taken out of contention following a tag from the Mercury, which was second from the Cortinas of Steve Soper and Jordan. But of course the overall result is an aggregate and after the maths was done, Soper/Andy Priaulx were victorious. 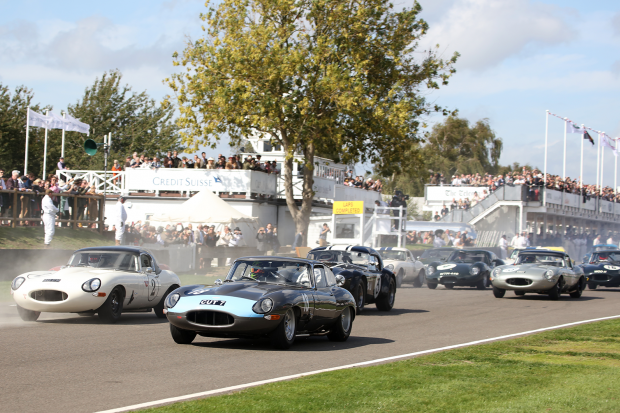 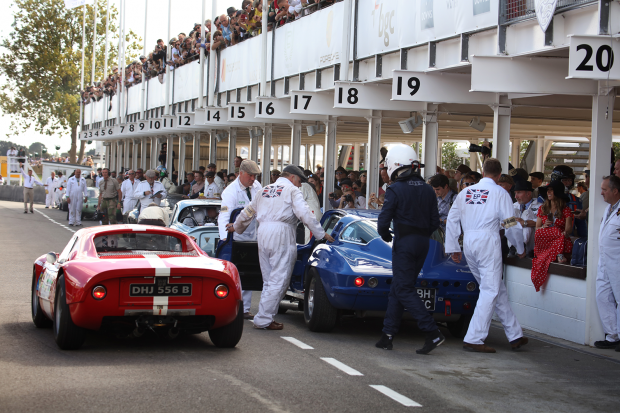 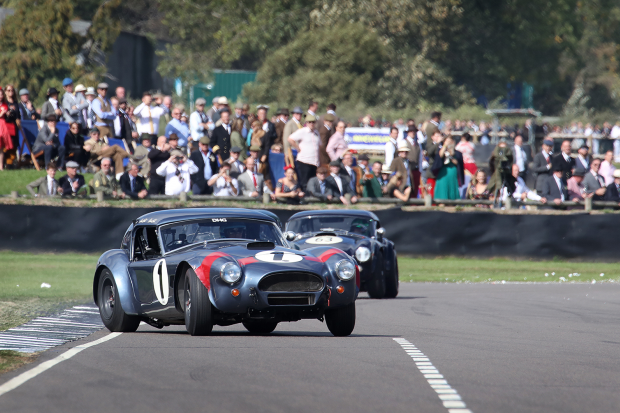 Next was one of the Revival’s blue-riband races, the 60-minute (cut to 45-minute), two-driver RAC TT Celebration for closed-cockpit GT cars in the spirit of the ‘60-‘64 RAC TT races.

David Hart (AC Cobra), who won the race in 2014, took the lead from pole, Cobras in the first four places. But Hart hit the chicane, earning a five-second penalty which he later described as “stupid” and “a little greedy”. However he kept the lead, his son Olivier taking over and soaring to victory, setting the fastest lap on the final circulation.

Behind them, Martin Stretton was setting quick times in Karsten Le Blanc’s Cobra, pitting late to try and build a big gap, but to no avail. Rob Huff (Jaguar E-type) got mixed up with the Cobras, but ‘CUT 7’ retired at the pitstop after accident damage.

After an intense 45 minutes, it was three different marques in the top three, a jubilant win for the father and son team of Hart/Hart in the Cobra, from the Minshaw/Keen E-type and the Mike Whitaker/Jordan TVR. 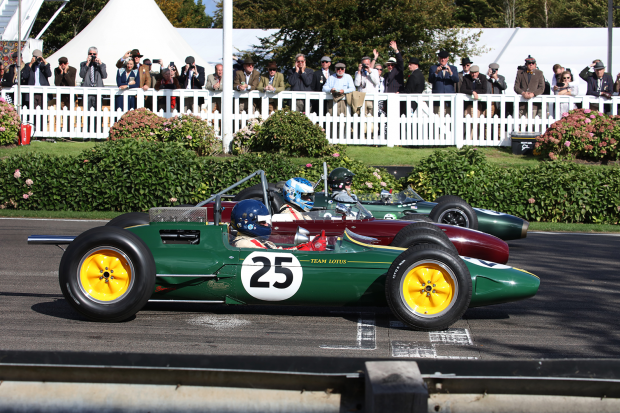 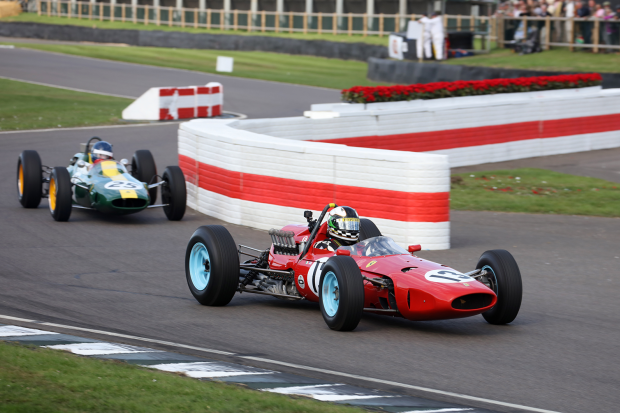 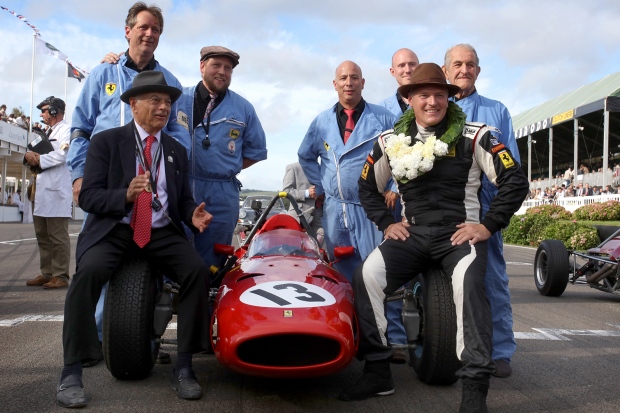 The Glover Trophy, a battle between rear-engined Grand Prix cars from 1961-’65, saw Joe Colasacco (Ferrari 1512) come from sixth place on the third row of the grid to take the chequered flag after 15 laps, 1.3 secs from poleman Andy Middlehurst (Lotus-Climax 25) who had dominated qualifying.

Jon Milicevic (LDS-Climax F1) and James King (Brabham-Climax BT7) had great starts from the front row, but Middlehurst battled back past them, Colasacco soon hot on his heels.

Sadly, King had an off and damaged the Brabham’s suspension forcing him into retirement, while Colasacco continued to pile the pressure on Middlehurst. Taking advantage of traffic, Colasacco eventually got the Ferrari in front and made the most of its extra grunt to pull clear.

The Eagle Formula One car demonstration and the impressive track parade in honour of star privateer racing-team owner Rob Walker were next, the prelude to the final race.

And after a meeting where many were saying they’d seen the best racing in the event’s two decades, it was fitting that the Sussex Trophy for sports cars and production sports-racing cars from 1955-1960 closed the weekend in such spectacular style.

Keen was back on track, this time in a Lister-Jaguar ‘Knobbly’, but despite qualifying on pole, problems on the grid meant he had to start from the pits.

While he was plum last, Wills (Lotus-Climax 15) was also back in action, doing battle out front with Sam Hancock (Ferrari 246S Dino). As Hancock oversteered his way round the circuit, dicing with Oli Bryant (Lotus-Climax 15) who eventually took second, all that tussling allowed Wills to extend his lead.

However, an astonishing drive from Keen from the back, wringing the Knobbly’s neck, saw him scythe through the field and with two laps remaining, jaws were on the floor as he challenged Wills for the lead.

A mistake from Wills on the penultimate round let Keen through, giving him a lap out front to take a fairytale win from the pitlane, finishing 1.6 secs ahead of Wills, Bryant 3.5 secs further back in third.

It was a fitting end to a fabulous festival of historic motorsport that will last long in the memory.

Gallery: the greatest free car show in the world (aka the Revival Pre-'66 car park)

What we're most excited about at the Goodwood Revival 2018

How to watch the Goodwood Revival 2018 (without being there)

Like a Rolling Stone: Keith Richards’ Ferrari goes to auction

Yours for £500k: Fiat transporter that starred in Le Mans