Living the dream for a fraction of the price 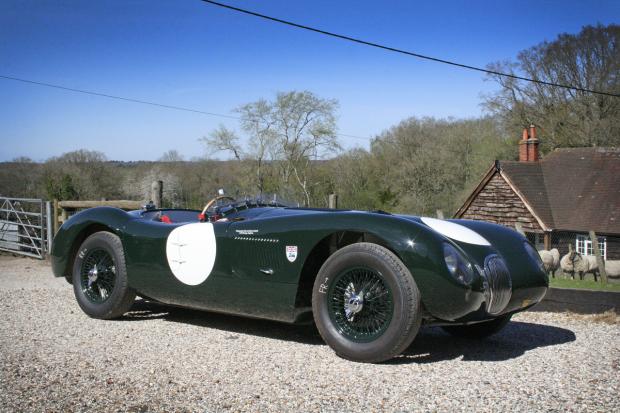 I should admit straight away that I have a changeable attitude towards replicas. Some just look wrong, while others look pretty accurate but have completely unsuitable running gear. Very few seem, to my eye anyway, to get the mixture spot-on.

I have, however, always had a bit of a weakness for Jaguar C-type replicas. The Coventry firm’s original road-racer is one of my all-time favourites, and I can definitely see myself in a good recreation. Apart from as transport to the Le Mans Classic, that is, because last summer everyone queuing for the ferry seemed to have one…

But that’s beside the point. A few weeks ago, art editor Port organised a photoshoot location that just happened to also be the home of Classic Jaguar Replicas. He knows owner Phil Cottrell from the latter’s role running Thatcham Mini Centre, but Cottrell and son Oli now spend most of their time building C-type, D-type and XKSS reps.

Phil has long been associated with Jaguars, as a dealer, restorer and mechanic. In fact, he kept the first two replicas that he built – both D-types – for himself. He then worked with Realm Engineering to develop the Heritage C-type recreation, before Oli joined him in 2005.

At the end of our (completely unrelated) shoot, Cottrell offered me a drive in their own ‘demo’ C-type, and it seemed rude to say no. The fact that each car they produce is tailored to the owner, and I was a good few inches shorter than either Phil or Oli, was no problem. Phil raised the seat base a little so that I could see over (or at least through) the steering wheel and, with legs fully stretched to reach the pedals and Port alongside on camera duties, I was good to go.

CJR has now produced 19 C-types, with each one based on original factory drawings. Beneath the aluminium bodywork (a glassfibre version is also available) lies a handmade spaceframe chassis and the running gear from an XJ6. That means a 4.2-litre straight-six, in this case running on triple Webers. There’s fully independent suspension all round, and a Toyota five-speed gearbox.

It’s a stunning package on the road. The gearchange, via this car’s competition clutch, is fantastic and straight-line performance eye-opening. The noise – such an important part of an authentic replica – is savage, the crisp note barely silenced on this example.

It handles tidily as well, with the radials giving plenty of grip, plus the disc brakes inspire confidence.

If that doesn’t seem like a recipe to attract the purist, Phil offered me a drive in another C-type that he happened to have on-site. This time, it had a Jaguar gearbox and SU carburettors, plus a quieter exhaust and crossply tyres.

The gearchange had a longer throw and the engine did most of its work lower down the rev range compared to the more highly strung Weber-equipped version, but this would undoubtedly be the better choice for a longer run on the road – despite the increased ‘wandering’ and reduced grip from the crossplies. It’s calmer, less conspicuous, more usable, and closer in spirit to the original.

With the glassfibre cars starting at just over £40,000, and the aluminium ones for almost twice that, I’m unlikely to fulfill any dreams of ownership just yet. While Port occasionally talks in wistful tones about GT40 replicas, the couple of hours spent playing with CJR’s cars confirmed that – in the world of recreations – a C-type is still top of my list.

If you want to get an idea of the noise, by the way, click here to check out our video of the two cars in action.