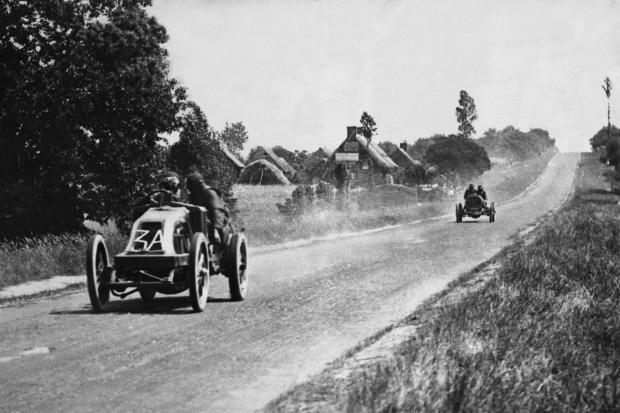 It’s not quite the 12 days of Christmas, but our list of a dozen moments in motorsport history were nonetheless important in their own way.

They cover innovation, opportunity, tragedy, determination and, as you might expect, good old-fashioned politics…

A new type of race

The 1906 French Grand Prix developed out of the annual Gordon Bennett races that had taken place since 1900.

The idea behind those had been to pitch countries against each other, with each one entering up to three cars.

The French argued against those entry limits, and after winning the Cup in 1905, it was down to them to host the following year’s race. Instead, they abandoned the Gordon Bennett rules – leading to Great Britain’s withdrawal – and staged a new race on a 64-mile circuit around Le Mans.

Described by The Autocar correspondent WF Bradley as ‘the first Grand Prix’, it took place over two days and a total of 12 laps. Ferenc Szisz won for Renault (pictured above, leading Elliot Shepard in a Hotchkiss HH), 32 minutes clear of Felice Nazzaro’s Fiat.

The Automobile Club de France repeated the event in 1907, and Grand Prix racing was under way. ‘There was no prize money,’ wrote Bradley, ‘… but the prestige was immense.’

The end of WW2 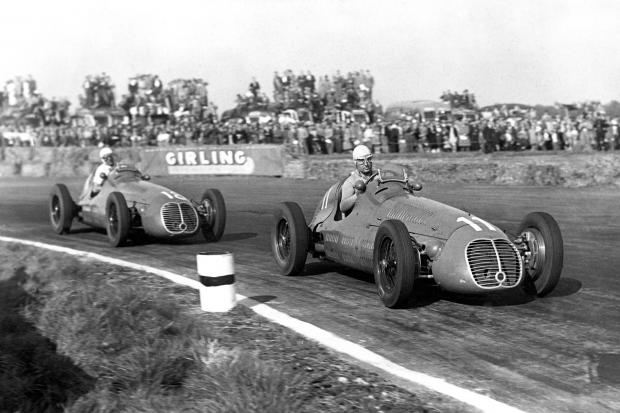 This landmark moment in world history also had a lasting effect on British motorsport.

Until the war, racing had largely been the preserve of wealthy amateurs. Following it, however, there was a whole new generation of engineers who turned their attention from military matters to the question of making cars go faster round a circuit.

Equally important was the change to those circuits. Brooklands and Donington Park were out of commission, but dotted around the country were myriad recently abandoned airfields that fitted the bill very nicely indeed.

Goodwood and Silverstone remain the most celebrated, but among countless others there was also Castle Combe, Snetterton and, later, Thruxton.

There was a boom in affordable motorsport in the immediate post-war years, and through its ranks came most of the people who laid the foundation for the UK’s still-thriving motorsport industry. 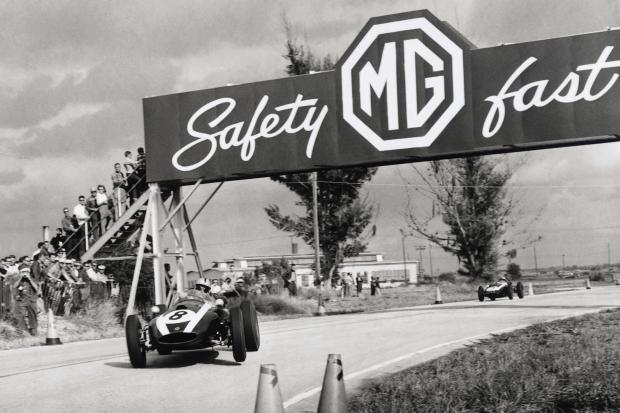 A Cooper had won a championship Grand Prix before 1959, but Stirling Moss’s victory in Argentina the previous year had largely been seen as a triumph of tactics and Moss’s genius.

The following year, however, the Surbiton-based team took Jack Brabham to the title – and everyone else conceded, some more readily than others, that the engine belonged behind the driver.

Cooper started out making rear-engined cars for the post-war 500cc formula, and carried that layout into both sports-car racing and Formula Two.

In 1957, it stepped up to Formula One, and initially its cars were viewed as curiosities rather than game-changers.

But by the closing round of the 1959 season, Brabham had won twice, and claimed his first championship by pushing his car over the line at Sebring to finish fourth, while Cooper took the constructors’ crown. 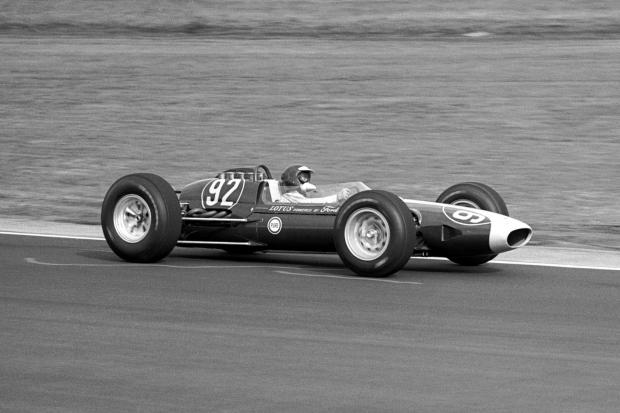 Cooper nudged open the door to Indianapolis when it entered a low-slung variant of its rear-engined Grand Prix car for the 1961 500, but it was Colin Chapman who truly led the British Invasion of the fabled Brickyard.

Dan Gurney was instrumental in the project, for which Ford built a 4.2-litre Fairlane-based V8.

‘Handsome Dan’ and Jim Clark had a Lotus 29 apiece, and the latter almost scored a sensational debut victory. Officials refused to black-flag Parnelli Jones’ leading car, and Clark had to settle for second.

The legendary Scot handled the disappointment with typical grace, and found the perfect answer two years later by taking victory in the new 38.

By then, the front-engined Roadsters had been swept aside and Indy had changed forever. 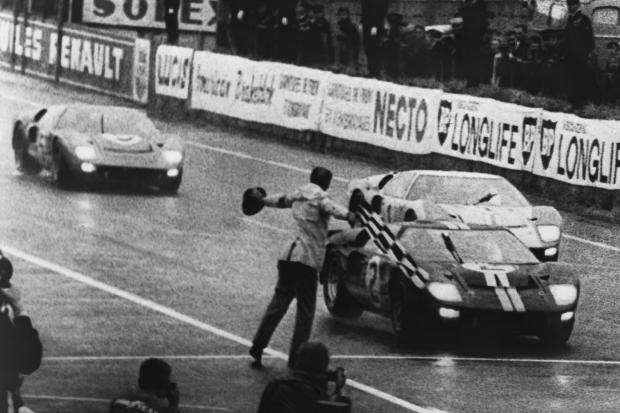 The moment the Ford GT40 won Le Mans in 1966, thus getting revenge on Enzo Ferrari

On the face of it, Ferrari was in the middle of a golden period during the early 1960s.

The team had adapted well to the 1.5-litre Formula One regulations, it was putting together six consecutive Le Mans victories, and it was dominating GT racing.

Yet Enzo was nonetheless contemplating selling. Ford was at the door with $18 million, and in spring 1963 it looked as if the deal was nearly done.

But when Enzo discovered that the freedom he’d been offered in terms of running his race team wasn’t as complete as he’d understood it to be, he walked away. Literally, in fact, leaving 14 Detroit representatives sitting around a table.

They got both mad and even, turning their attention to the GT40 project with the firm ambition of ending Ferrari’s domination at Le Mans.

In 1966, they did just that with their infamous attempt to stage a dead heat. “It was like trying to mix popcorn and pasta,” Ford’s Walter Hayes later said of the aborted takeover. “I don’t think it was a very nourishing recipe.” 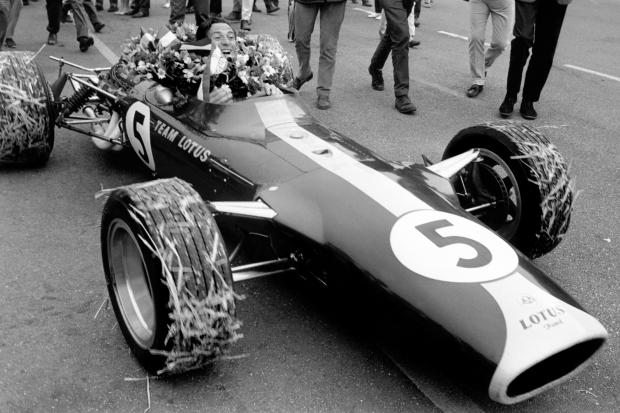 Jim Clark celebrates a first win for the Cosworth DFV at Zandvoort, on its debut

In 1965, Colin Chapman approached Keith Duckworth and Mike Costin to ask if they’d be interested in building a 3-litre Grand Prix engine for Lotus.

Cosworth had made its name with Ford-based engines, so it was only fitting that Chapman then persuaded the Blue Oval to bankroll the new unit, which Duckworth estimated would cost £100,000 to design and develop.

It was possibly the best £100,000 that Ford ever spent. The DFV made its debut at the 1967 Dutch Grand Prix and Jim Clark swept to victory.

Such was the new engine’s advantage that Walter Hayes suggested to Chapman that they’d have to offer it to other teams. Much to Jim Clark’s dismay, Chapman agreed.

Between 1967 and ’83, it claimed 155 Grand Prix wins. In 1975, a DFV-powered car even won the Le Mans 24 Hours, and derivations of it dominated Indycar racing. It stands alone as the greatest racing engine of all time.

The arrival of downforce 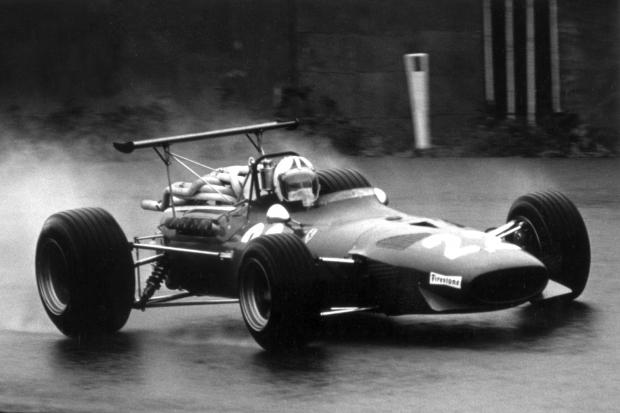 Although Chris Amon retired from the ’68 Belgian Grand Prix, his Ferrari 312 carried an early rear wing

There was a time when motorsport aerodynamics basically involved reducing drag – streamlining, in other words. People had played around with wings, but they were generally crude devices.

Then, in 1966 and ’67, Jim Hall introduced a moveable high-mounted wing on his Chaparral 2D and 2E sports-racers.

In 1968, Formula One teams began to follow suit. At Monaco, Graham Hill’s Lotus 49B had front aerofoils and a wedge-shaped rear body section, and by the following race at Spa, Ferrari and Brabham had added elegant wings to their cars.

With seemingly little appreciation of the forces involved, teams were soon building tall wings in order to take advantage of cleaner airflow, but they were eventually banned after a series of accidents in which the fragile supports had failed.

Teams adapted, though, and in time a skilled aerodynamicist was the most important weapon in their armoury. Downforce was here to stay. 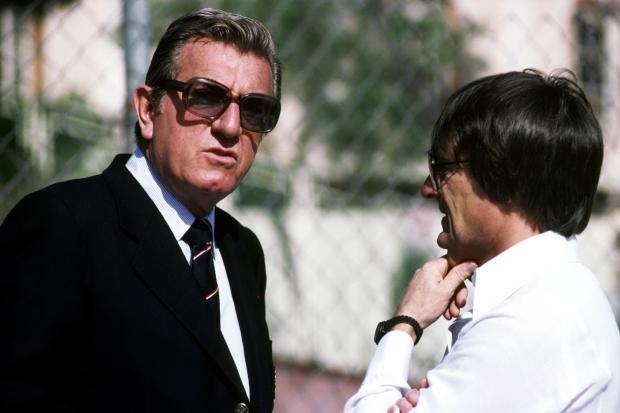 Soon after Bernie Ecclestone took over Brabham in the early 1970s, he started applying his formidable business brain to the remuneration that was on offer to Grand Prix teams.

In short, he felt it wasn’t sufficient, which led to the formation of the Formula One Constructors Association.

FOCA bought together the likes of Tyrrell, Lotus, McLaren and Williams, with Ecclestone doing deals with race organisers on their behalf.

As his power grew, it brought him into bitter conflict with Jean-Marie Balestre, recently installed as head of FISA – the sport’s governing body.

In the end, a compromise was reached. In effect, FISA would make the rules, Bernie would do the deals. The commercial impact of that fundamentally changed Formula One.

Ecclestone certainly brought untold riches to a relatively small number of people within the paddock. How much he did for the average enthusiast is more open to debate. 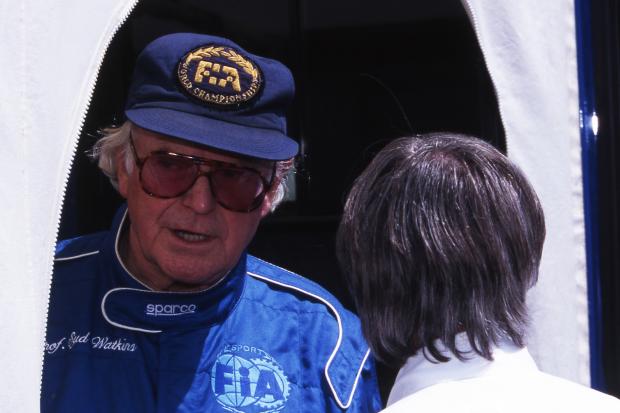 Say what you will about Ecclestone’s impact on the commercial side of Formula One, there can be no arguing with another of his decisions – bringing Professor Sid Watkins on board to revamp the sport’s medical arrangements.

Jackie Stewart had courageously campaigned for greater safety, but Watkins – a respected neurosurgeon – was able to make an even bigger contribution.

Key to his success, at a time when race organisers could be positively hostile to his efforts, was the unwavering and unquestioning support of Ecclestone.

Over the years, Watkins ensured that each venue had a proper medical centre, rapid-response cars, fully trained medical staff and everything that was needed to give drivers the best possible chance of surviving an accident.

Anyone who’s seen footage of lamentable rescue efforts in the pre-Watkins days will agree that he arrived not a moment too soon. 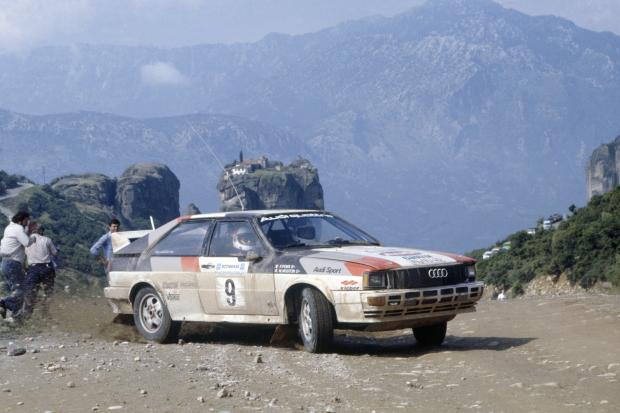 Jörg Bensinger joined Audi in 1968 convinced about the benefits of four-wheel drive in a performance car, but not for a while was he given the chance to prove his point.

When Audi became involved in the development of the Volkswagen Iltis, however, Bensinger took an Audi 80, fitted it with the military vehicle’s drivetrain, and dropped in a five-cylinder turbocharged engine from the 200.

Despite the project’s obvious potential, VW’s hierarchy took a lot of convincing to give it the green light.

Audi was not recognised as a performance brand at that time, so a competition programme was devised in order to publicise the new model, and its arrival on the world stage heralded a revolution in rallying.

As Michele Mouton put it, “As soon as I drove the quattro, I could tell it was the future.”

Gachot gets sent to prison 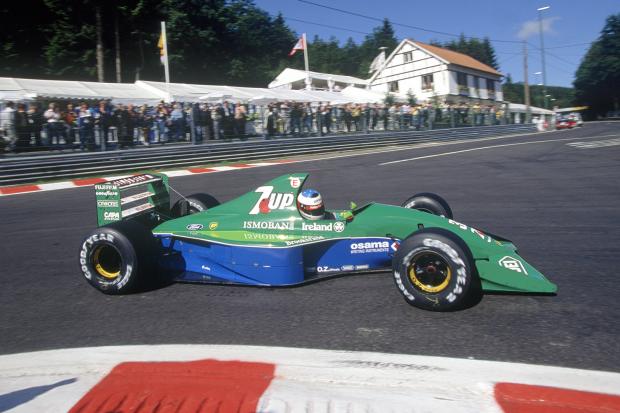 Bertrand Gachot had been enjoying an impressive 1991 season, scoring points in Formula One for the new Jordan team and winning Le Mans for Mazda.

Months earlier, though, he’d got into an altercation with a London taxi driver and sprayed CS gas into his face. Shortly before the Belgian Grand Prix, Gachot was sentenced to six months in prison.

Eddie Jordan was in sudden need of a second driver for Spa, which is when Mercedes came along with a chunk of cash and one of its young sports-car aces – Michael Schumacher.

Despite never having driven around the Ardennes circuit – something of which Jordan was blissfully unaware – Schumacher qualified seventh, four places and seven-tenths ahead of team-mate Andrea de Cesaris.

His race lasted only a few hundred metres before the clutch failed, but it was clear that a special talent had arrived. 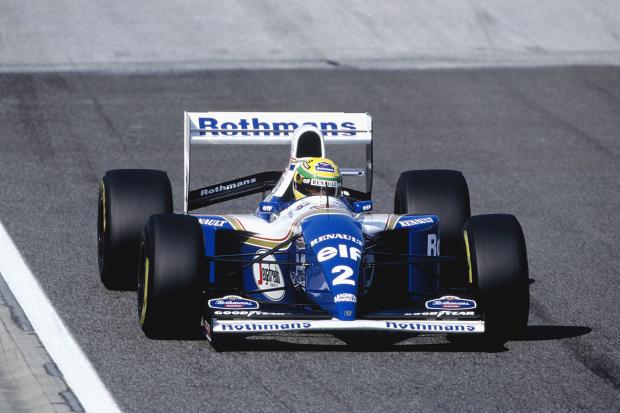 Not for 12 years had a driver been killed during a Grand Prix weekend, but at Imola in 1994, first Roland Ratzenberger then Ayrton Senna died. It was a watershed moment for Formula One.

In the past, such accidents had been viewed as desperately sad, but also with an understanding that they were possible whenever you race cars.

Not any more, it seemed, the huge growth in media coverage meaning that a global audience watched the sport’s biggest star die on live television.

There was an enormous backlash in the wider press, and FIA boss Max Mosley moved quickly in an attempt to slow the cars down and make circuits safer.

Some of the changes were undeniably knee-jerk – temporary chicanes were the order of the day – but understandable given the prevailing atmosphere.

Even if motorsport will never be entirely free from risk, events at Imola led to a renewed focus on safety.