Above and beyond: driving the Fiat 2800 Royal Torpedo 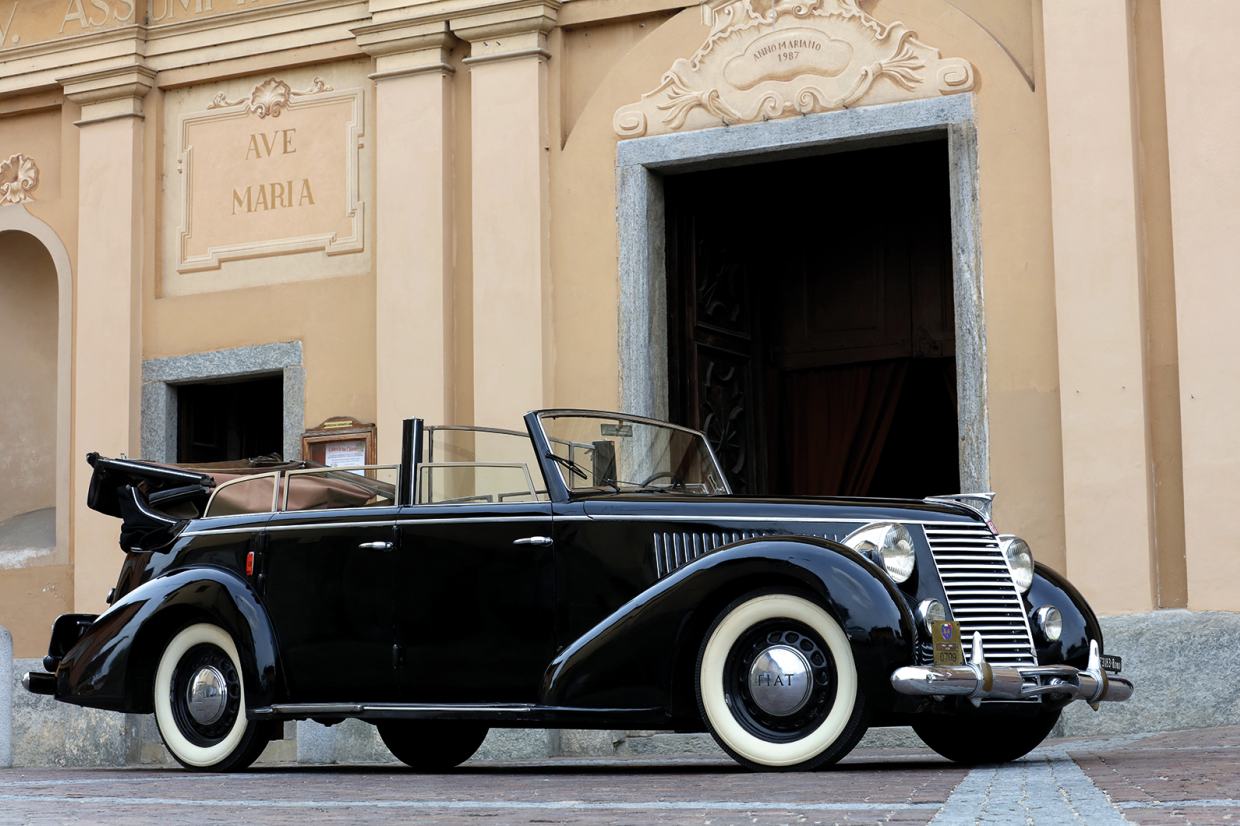 The 2800 was the final new Fiat introduced before the Second World War.

What political machinations were behind its introduction in 1938 we will never know for sure, but we can permit ourselves an informed guess.

At first glance such a low-volume, Detroit-inspired limousine looks an odd sort of vehicle for this rapidly industrialising company to have created at that particular moment.

Basking in the popular success of the 500 Topolino, Fiat was already thought of as the leading producer of cheap and thrifty ‘people’s cars’, not a maker of grand chariots for delusional despots. 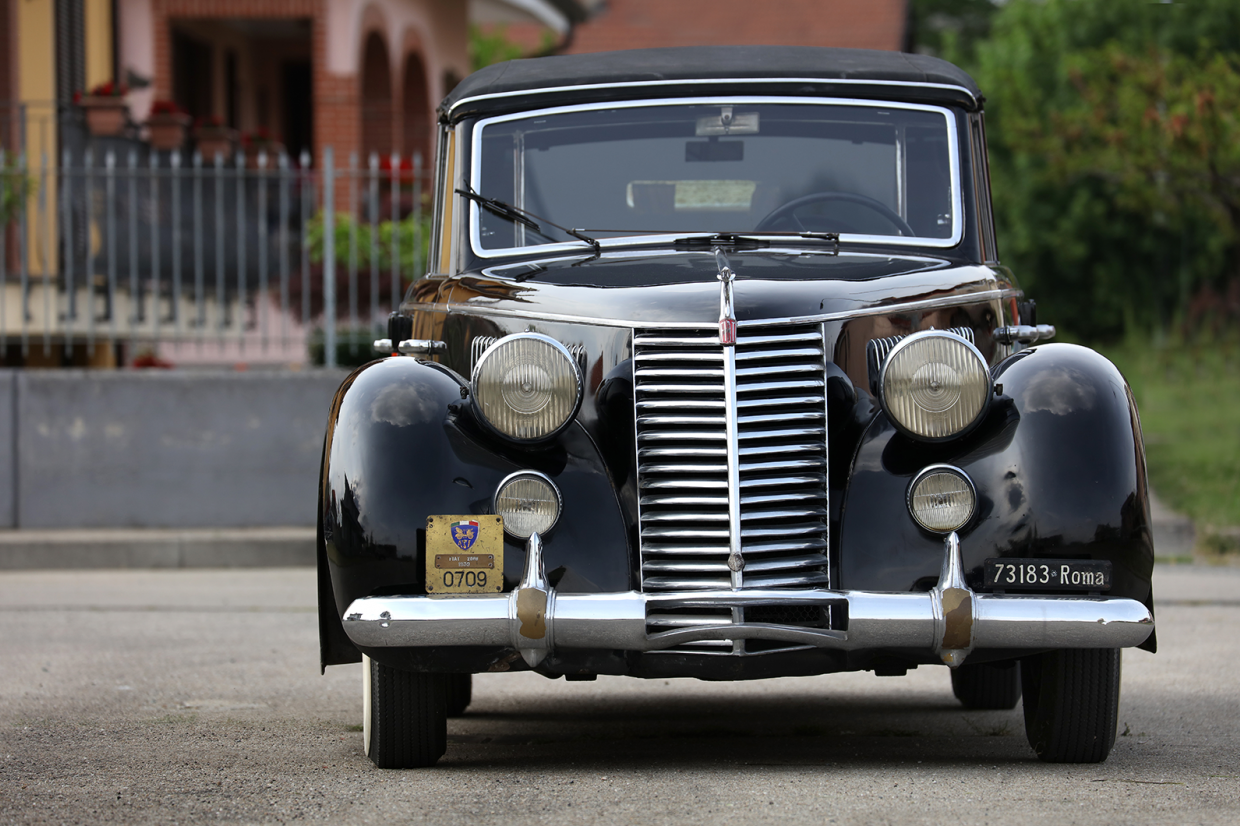 On the other hand, with Fascist Italy increasingly appearing on the world stage – and given Benito Mussolini’s penchant for military parades, autostradas and all of the modern, go-ahead possibilities of motor cars in general – there was a lot to be said, from Fiat’s point of view, for placing a truly imposing large saloon at the disposal of Il Duce’s government.

This dignified ‘representative’ car would put the name of the most important industrial entity in Italy front and centre in the fast-moving European events of the late 1930s.

Equally, the notion of a grande Fiat may have been presented to Turin management as a fait accompli; Mussolini was, after all, the prototype dictator who, as well as making the trains run on time, had provided the model for Adolf Hitler’s brand of leadership.

Both men understood the power of the still-young automobile as a way of projecting authority and, by funding national Grand Prix teams, technological prowess.

But while Hitler couldn’t drive and had no personal interest in racing beyond its ability to promote German technical supremacy, Mussolini was widely noted for his love of all things fast and four-wheeled. 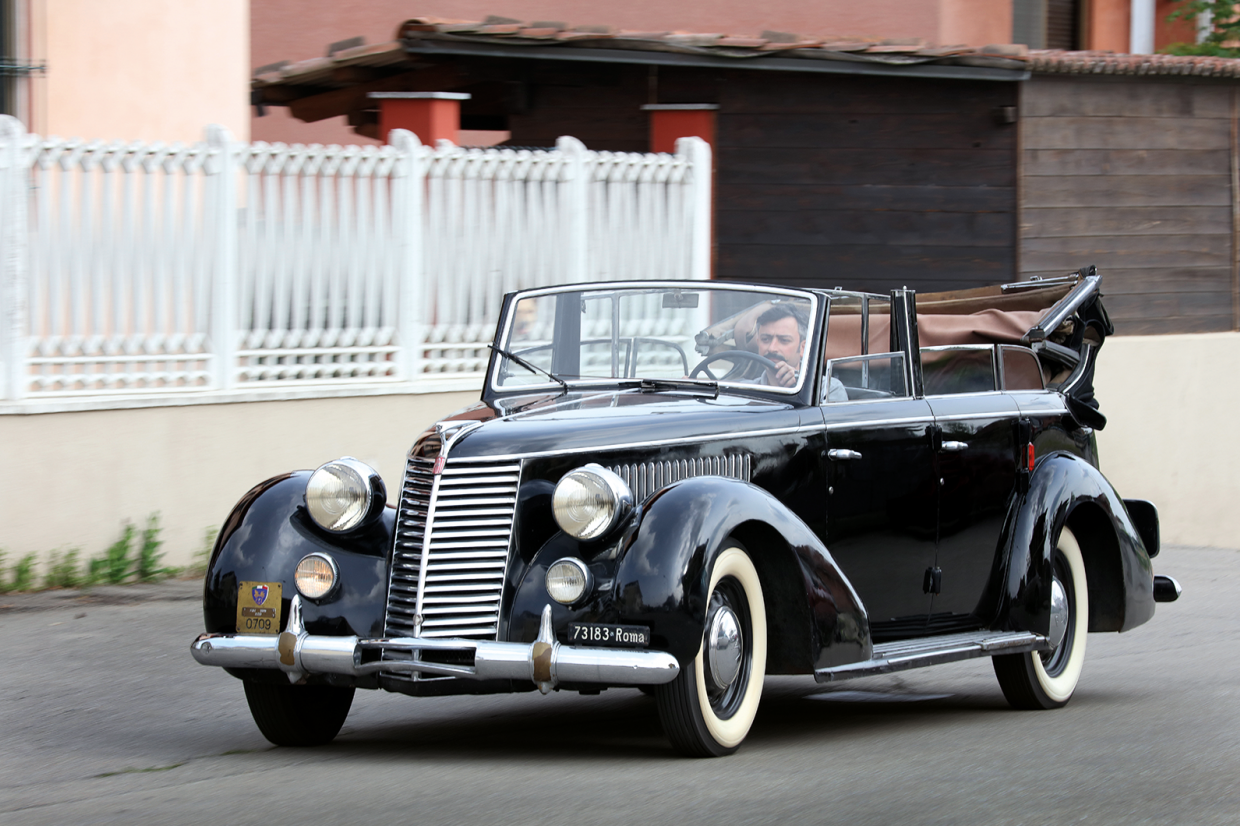 In fact, when he wasn’t strutting and preening before his public (arms folded, chin out), Il Duce was almost as consumed by an addiction to speed as he was in the pursuit of his own self-aggrandisement.

This manifested itself in an exuberant driving style that could reduce his passengers to a state of nervous exhaustion according to Enzo Ferrari, who once rode with Mussolini in his Alfa Romeo on a trip from Milan to Rome.

Even his personal chauffeur was no mere ‘driver ’, but a class-winning Mille Miglia pilot called Ercole Boratto.

As someone who we would today refer to as a ‘petrolhead’, it is perhaps grimly appropriate that Mussolini should end up hanging from a girder above a fuel station forecourt in April 1945. 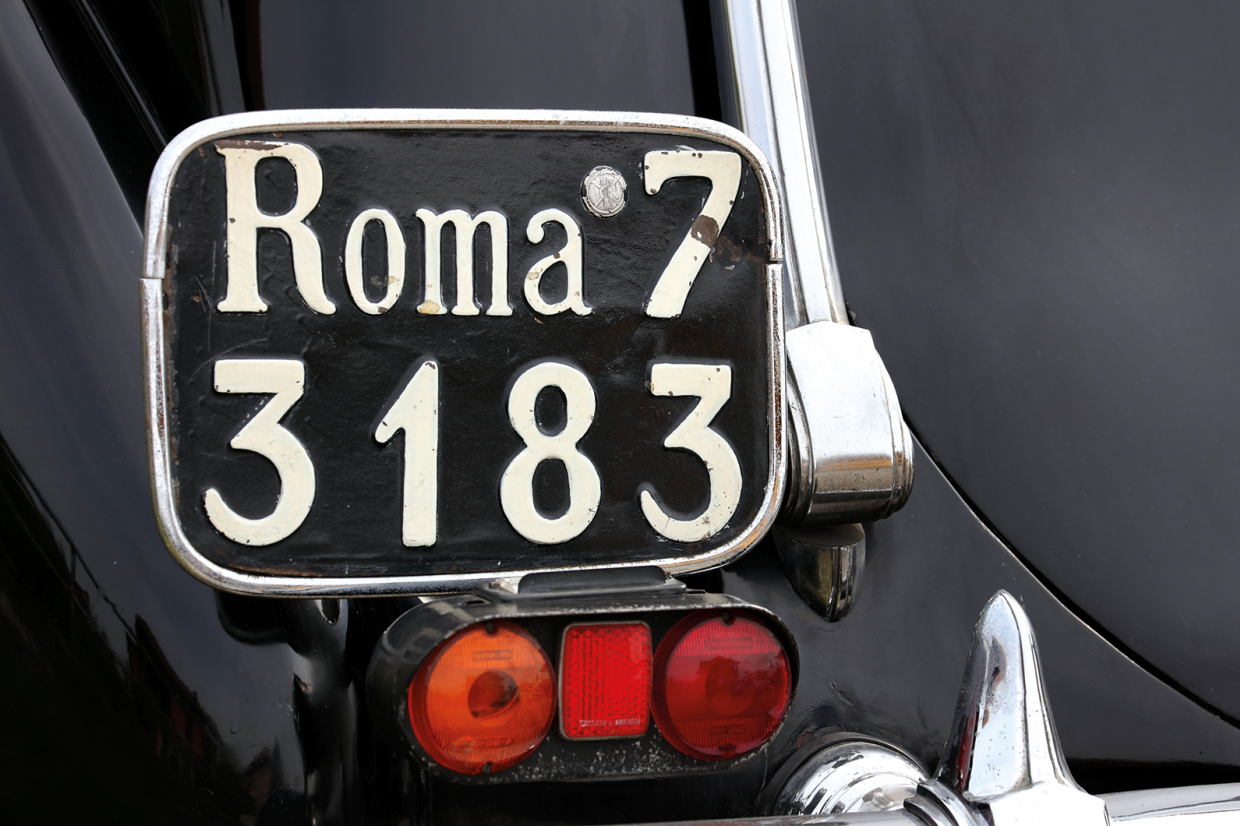 Still, he had good taste in cars. While Hitler and his cohorts stuck with the monstrous, chrome-laden Mercedes-Benz 770 ‘Grosser’ limousines, Mussolini at least tended to spread his favours: the Fourth Series Lancia Astura, Alfa Romeo 6C-2300 and Fiat’s late-to-the-party 2800 all featured in his official stable.

There had been large, expensive Fiats before, although the firm’s track record was hardly promising.

In the early ’20s it announced the 6.8-litre V12 ‘Superfiat’ for the American market, but it disappeared without trace after a showing at the 1921 Paris Salon and only three (or possibly five) are thought to have been built. The Tipo 530 straight-eight of 1930 was also withdrawn without explanation.

Thus, when he was tasked with creating a ‘dignified company vehicle’, Fiat’s then engineering manager Dante Giacosa was not hopeful for its prospects.

The co-creator of the Topolino was not a fan of big cars, preferring the intellectual challenge of small, rational vehicles, but tried to make the best of it by scheming a flagship Fiat with a transversely mounted rear engine. 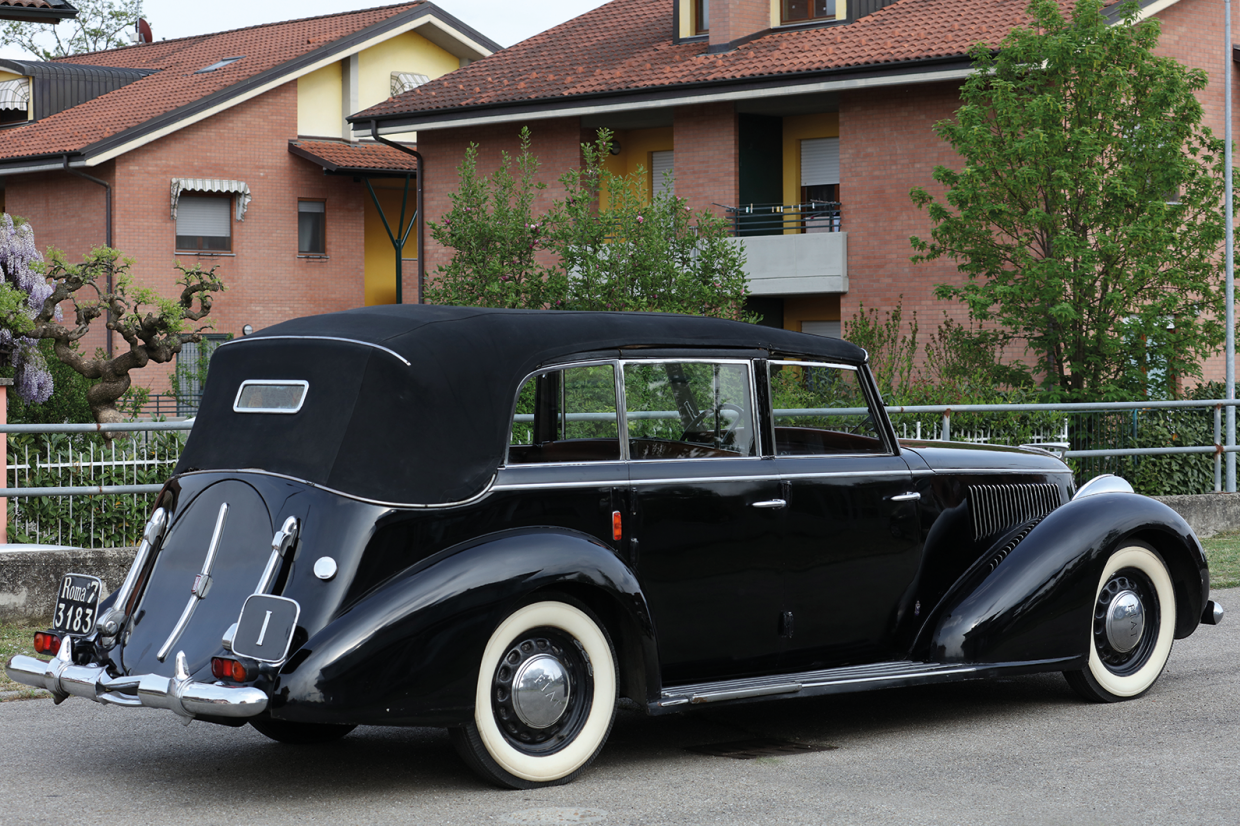 Even an idealist such as Giacosa must have realised that a rear-engined limousine would have been commercial suicide in the conservative ranks of the luxury car market.

Therefore, he was probably not surprised when his superiors wisely sanctioned against the idea.

The large, formal six-cylinder Fiat 2800 that emerged at the Paris Salon in 1938 was in many ways a scaled-up version of the well-established 1500, but with a bigger cruciform chassis similar to that of the 508C.

That is to say it was thoroughly modern for the late ’30s, without being particularly novel or advanced.

Italians were taxed on overall cubic capacity rather than bore size, which is why the engine, at 2852cc, seemed small in relation to the Fiat’s imposing bulk.

But this was a smooth, up-to-date short-stroke straight-six, with overhead valves in its aluminium head and side plates in its iron block (over the the water jackets) to save weight. 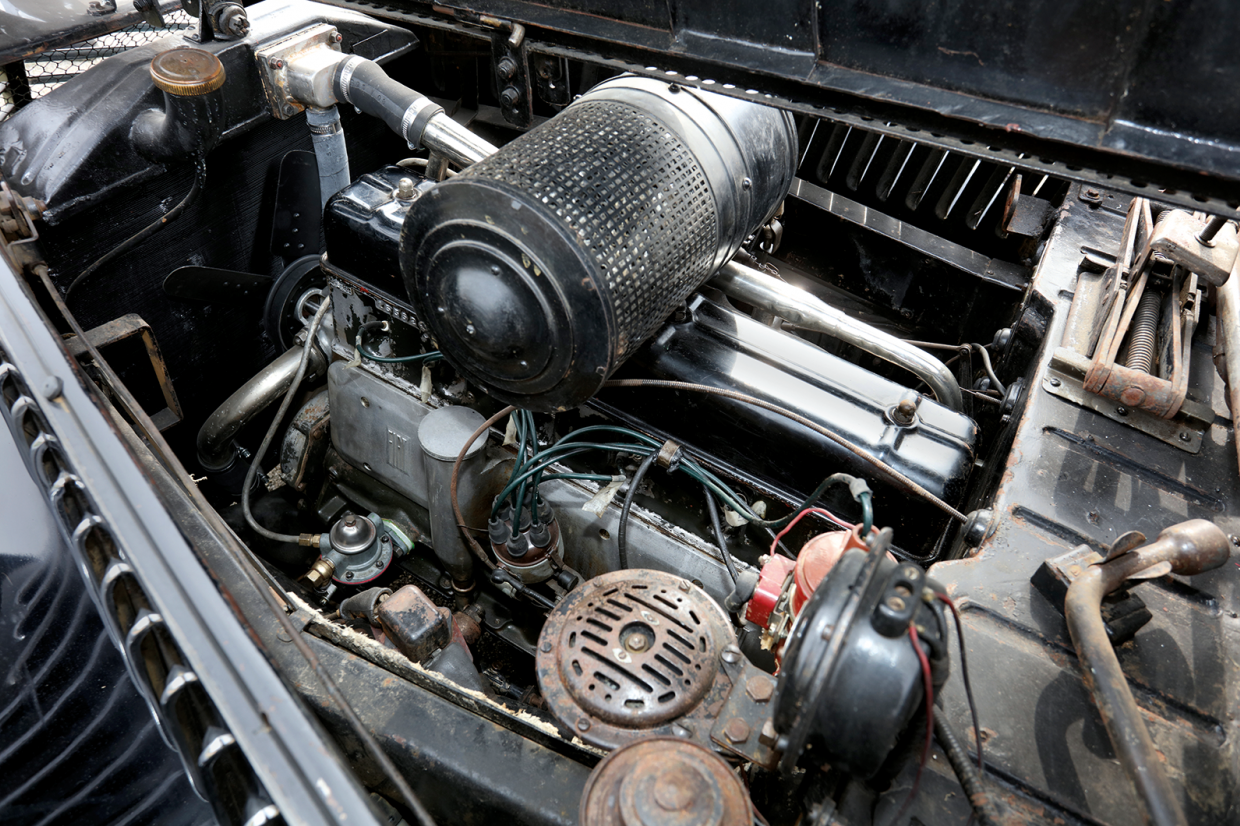 Able to run up to 4000rpm, the 2800 put its 85bhp through a four-speed manual gearbox with synchromesh on second, third and top.

With one of the less hefty bodies, the big Fiat would just exceed 80mph. More important, given its intended use, was the ability to pull smoothly from low speeds in high gears.

Even so, Giacosa considered the 2800 overweight for its power, but then so were the contemporary Lancia Astura and Alfa Romeo 6C-2300.

The front suspension was independent by Dubonnet-type trailing links, with a live axle on cart springs at the rear.

Even such banal-sounding amenities as headlamp flashers and self-cancelling indicators were luxuries well beyond the experience of most drivers 80 years ago. 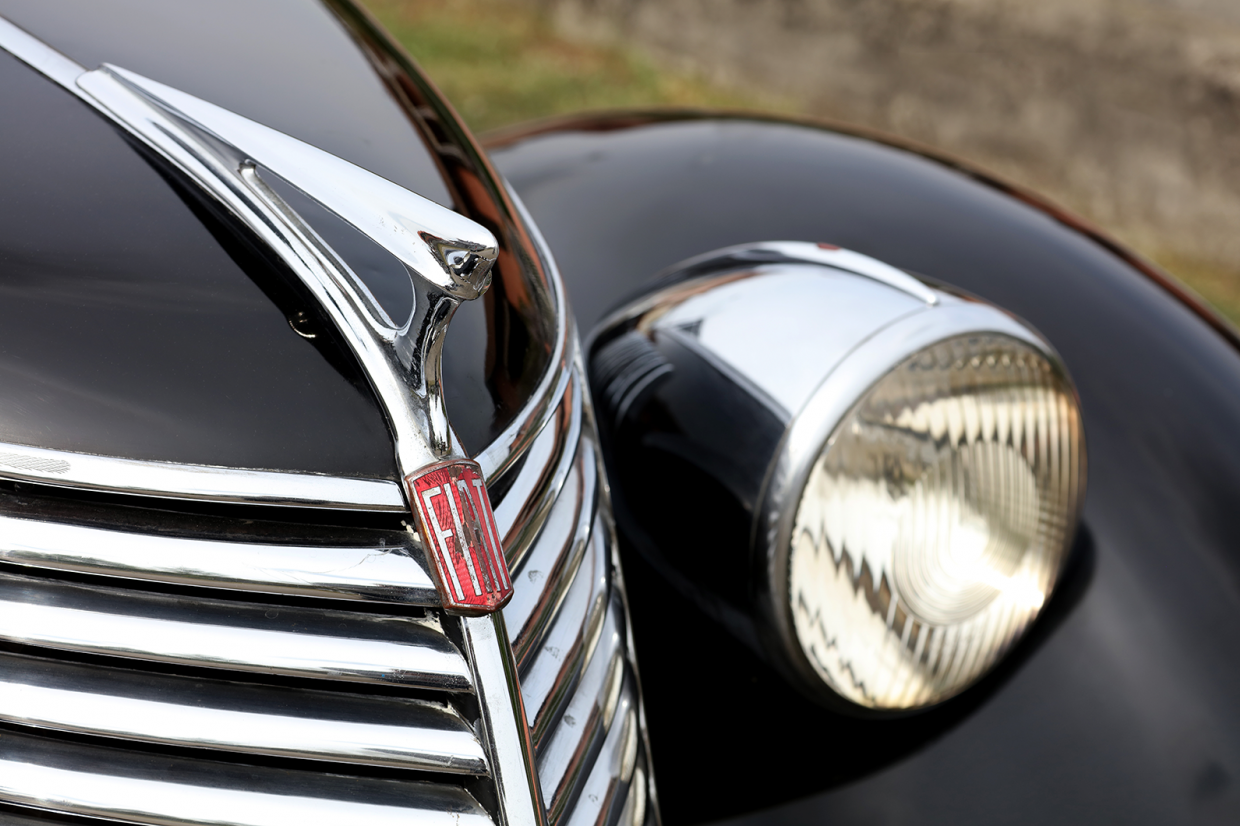 The Italian Interior Ministry ordered its Fiat 2800s in batches of up to a dozen at a time, mostly as Ministeriale limousines, usually bodied by Pinin Farina, Viotti, Castagna, Boneschi or Bertone.

However, whatever the coachbuilder or the chassis, the style of body was of the same single type officially approved by the Ministry, a six-light seven-seater on a 10ft 6in wheelbase.

The overall shape of the closed Ministeriale was cast in the mould of the latest Buick limousines from General Motors but, in the case of the 2800, featuring Fiat’s new corporate vee – or mussone – grille that later came to prominence on its smaller post-war models.

For the use of the nation’s highest-ranking dignitaries, however,12 2800s were created by Pinin Farina in the open-top so-called Torpedo Reale (Royal Torpedo) style of the grand Asturas in which Hitler and Mussolini famously paraded through Rome in 1939.

The Fiats, all finished in Imperial Black with rear-hinged doors and special anti-puncture Pirelli tyres, were part of the same motorcade.

Mussolini gave one of the parade cars to fellow dictator General Franco of Spain. Making presents of these grand state vehicles was becoming a theme: Hitler had already gifted a 770 Grosser to Mussolini. 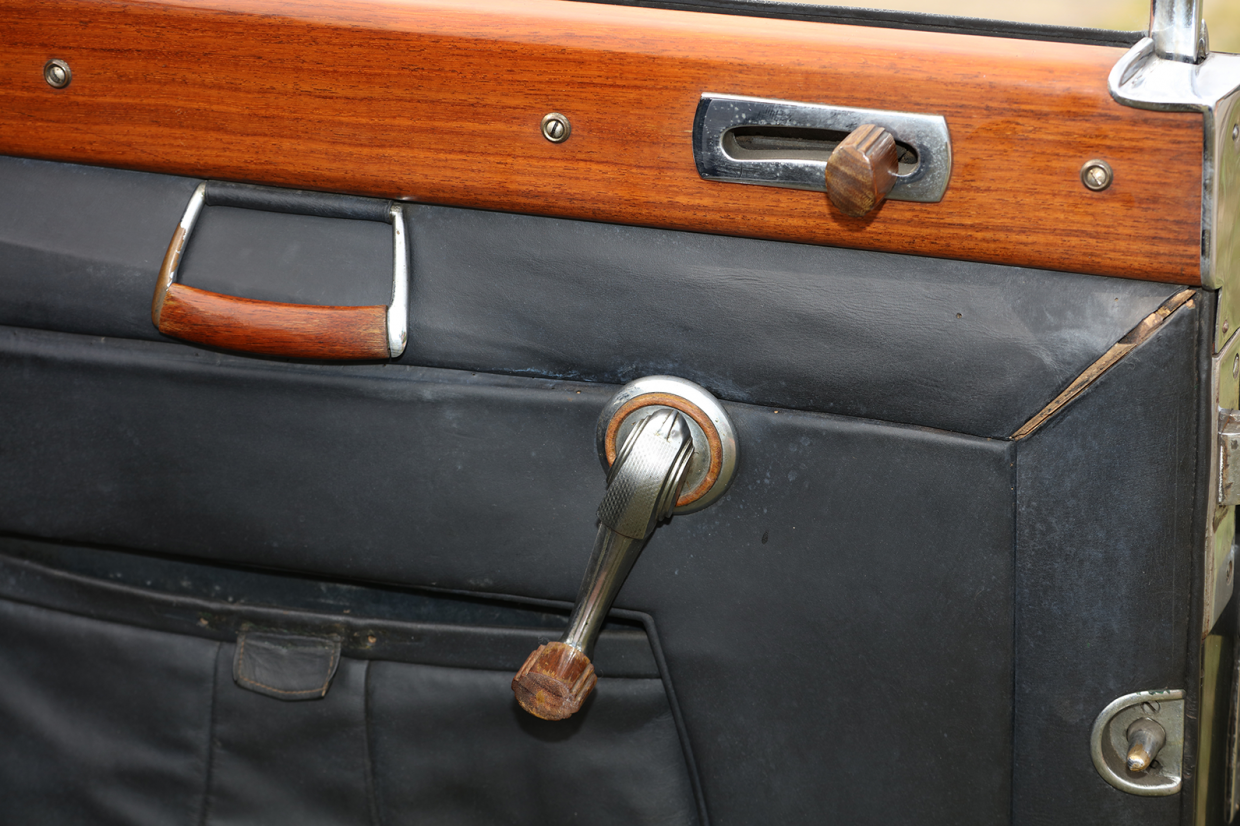 Other 2800s were used by Pope Pius XII and various members of the Italian royal household.

Six of the 12 parade cars were named after horses from the royal stable: Augustale, Auspicale, Amicale, Alceste, Admento and Alcinoo, each with sequential ROMA numberplates.

Chassis 000276, Alcinoo, was reserved for the use of Prince Umberto and seems to have led the most colourful existence, transporting not only Hitler but Franco, Emperor Hirohito and Nazi foreign minister von Ribbentrop on official visits before being used exclusively by Mussolini between 1940 and ’43.

After he was deposed, Alcinoo became the property of the Open City of Rome then, after 1946, of the Italian Republic.

Following the war, the Germans sought to dissociate themselves from the big, black, menacing cars that had been such a memorable element of the Nazi regime.

Not so the Italians, who, after repainting and retrimming them, cheerfully carried on using the 2800 Fiats as ceremonial vehicles through to 1963. They were at the disposal of the Quirinal Palace, official residence of the president of Italy. 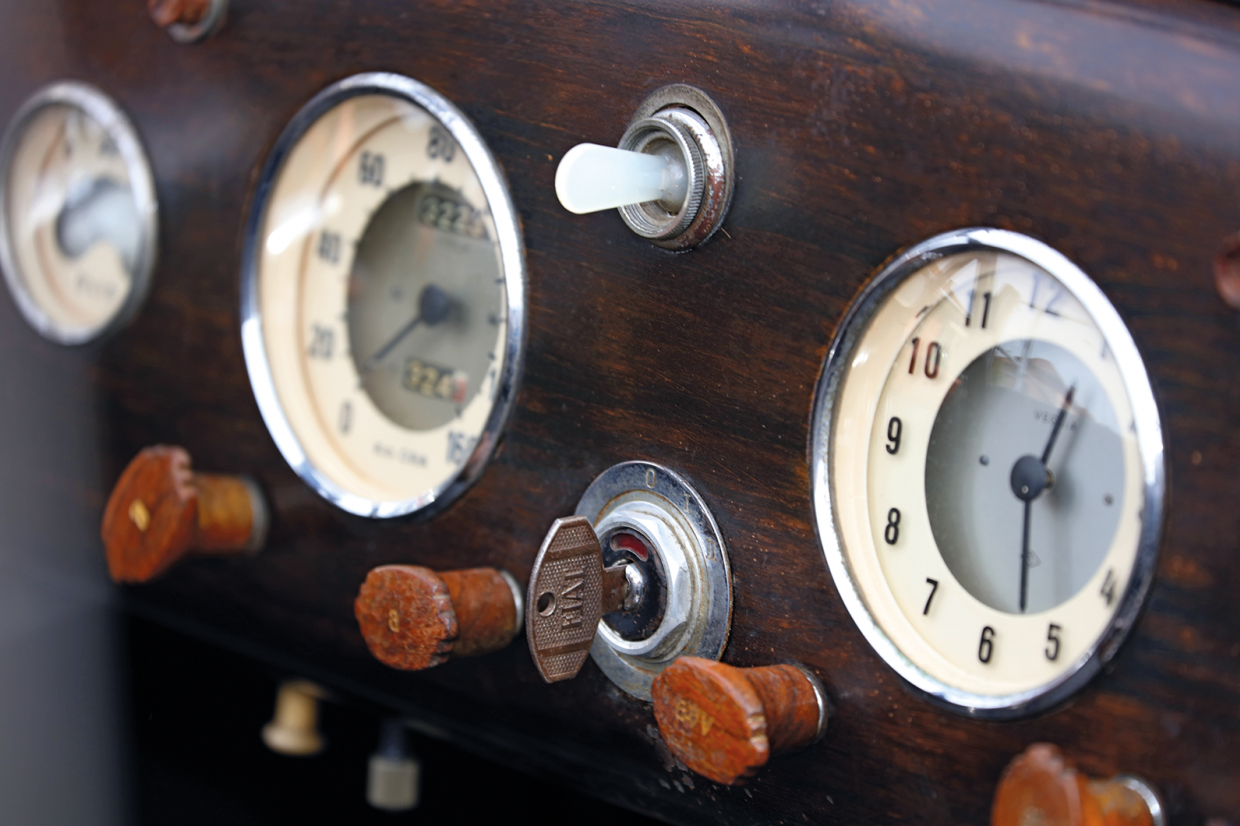 To give the Torpedo Reale 2800s a more contemporary look, the remaining official cars lost their side-mounted spare wheels and the first three leaders of the post-war Republic continued to use the Fiats until they were fully replaced by the three long-wheelbase presidential Lancia Flaminias that had been introduced in 1961.

The six named Torpedos ended up in the hands of Fiat’s Rome agent and were gradually sold into the trade.

The car pictured here, Alceste, was among the least-used and had covered only about 11,000km.

Today, chassis 000280 lives in a small town a few miles outside Turin and has been in the same private ownership for many years.

It is one of the two 2800 Torpedos that went with King Victor Emmanuel III to Brindisi when he escaped in 1943 following the Armistice.

In ’55, Alceste was used by President Einaudi to go to the inauguration of the Milan Fair and in the early ’70s it starred in a biopic about Il Duce. 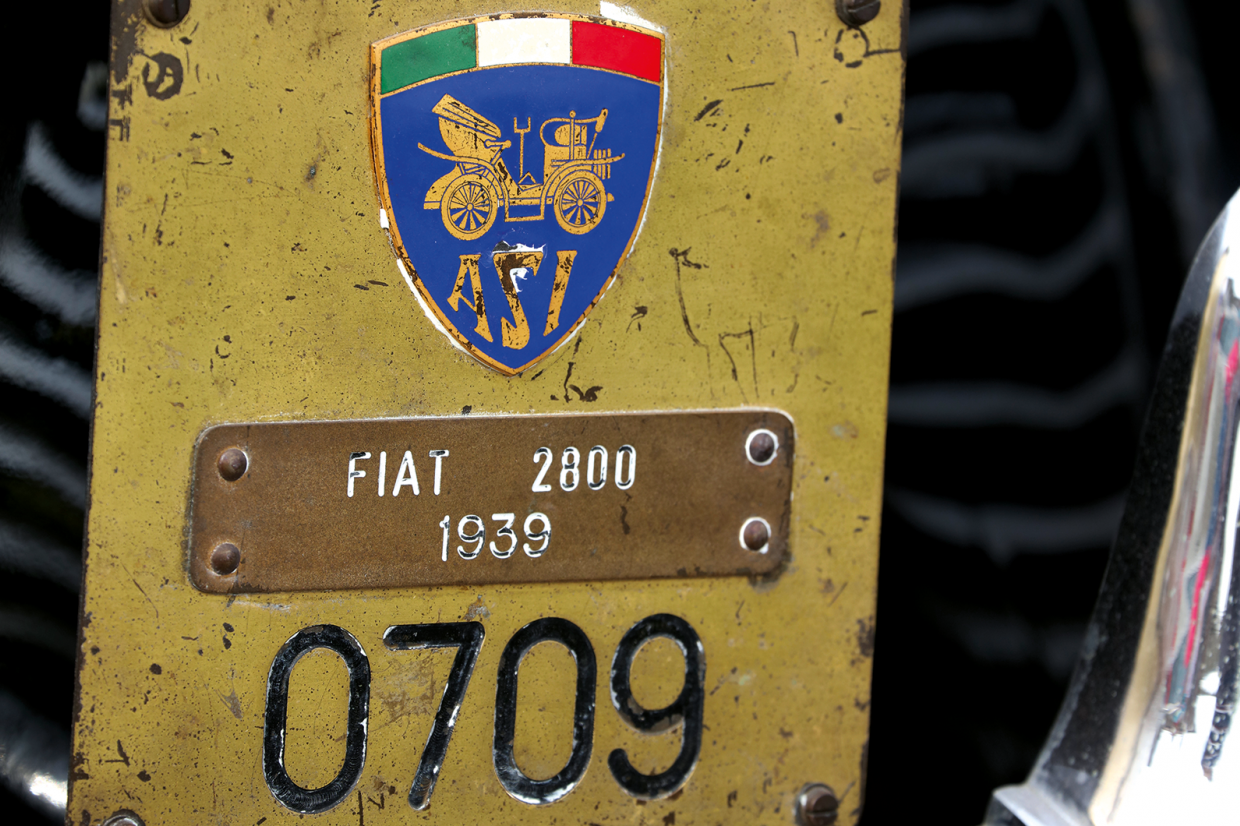 “My father-in-law bought it in around 1968 or ’69 from Pettenella, a restorer in Turin,” says the current owner.

“At the time, nobody but my father-in-law wanted it! In those days, it was mandatory in Italy that cars had to be issued with new numberplates if they moved out of the province but, because my father-in-law didn’t want to lose the original ROMA licence plate, he didn’t do the paperwork.

“Despite that, in all the years that followed, he was stopped only once by a carabiniere, who understood the preciousness of the car and didn’t fine him. 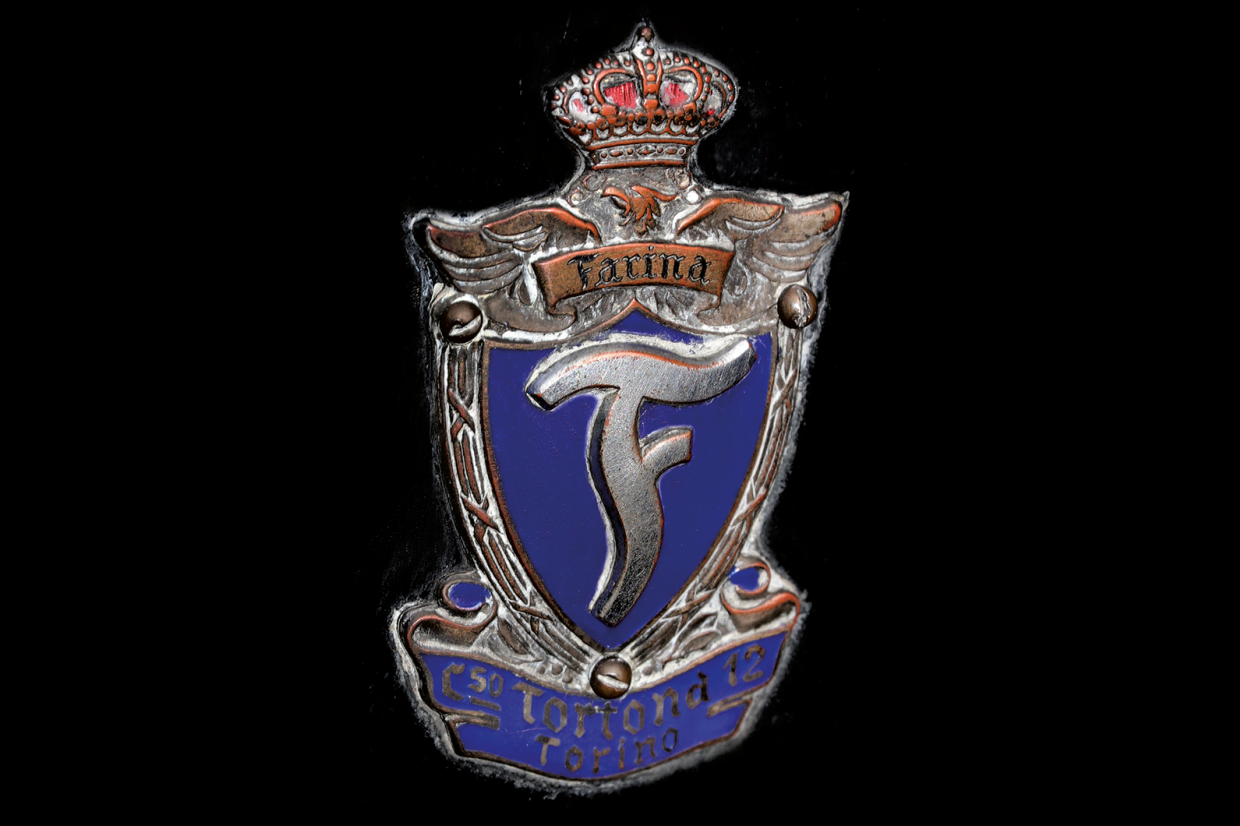 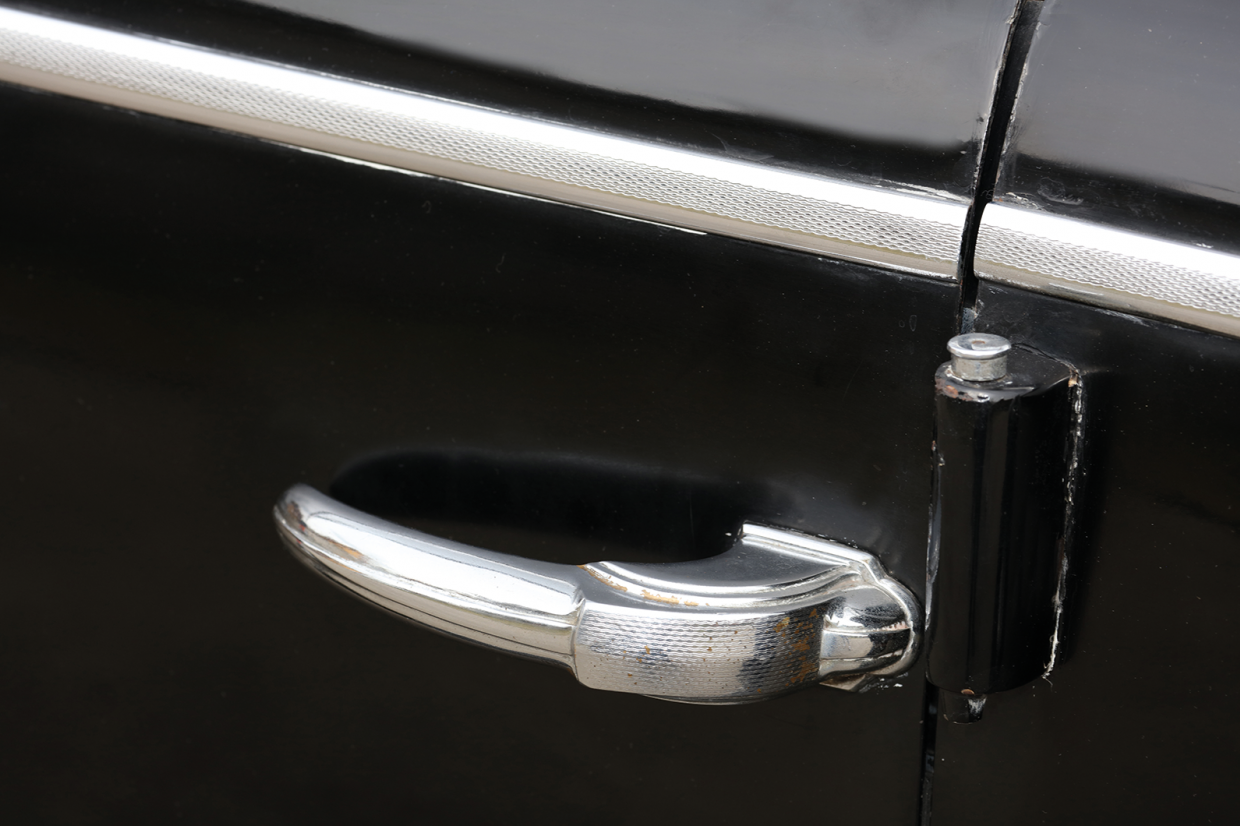 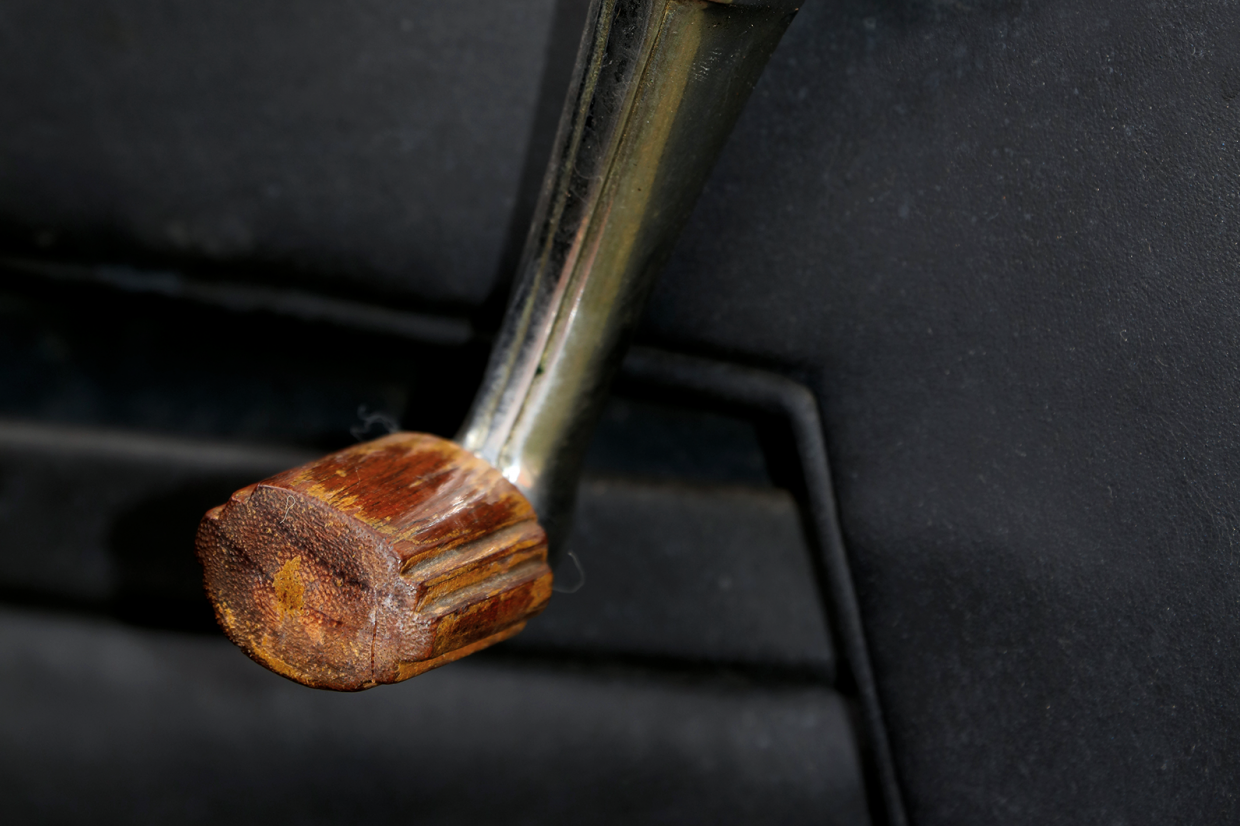 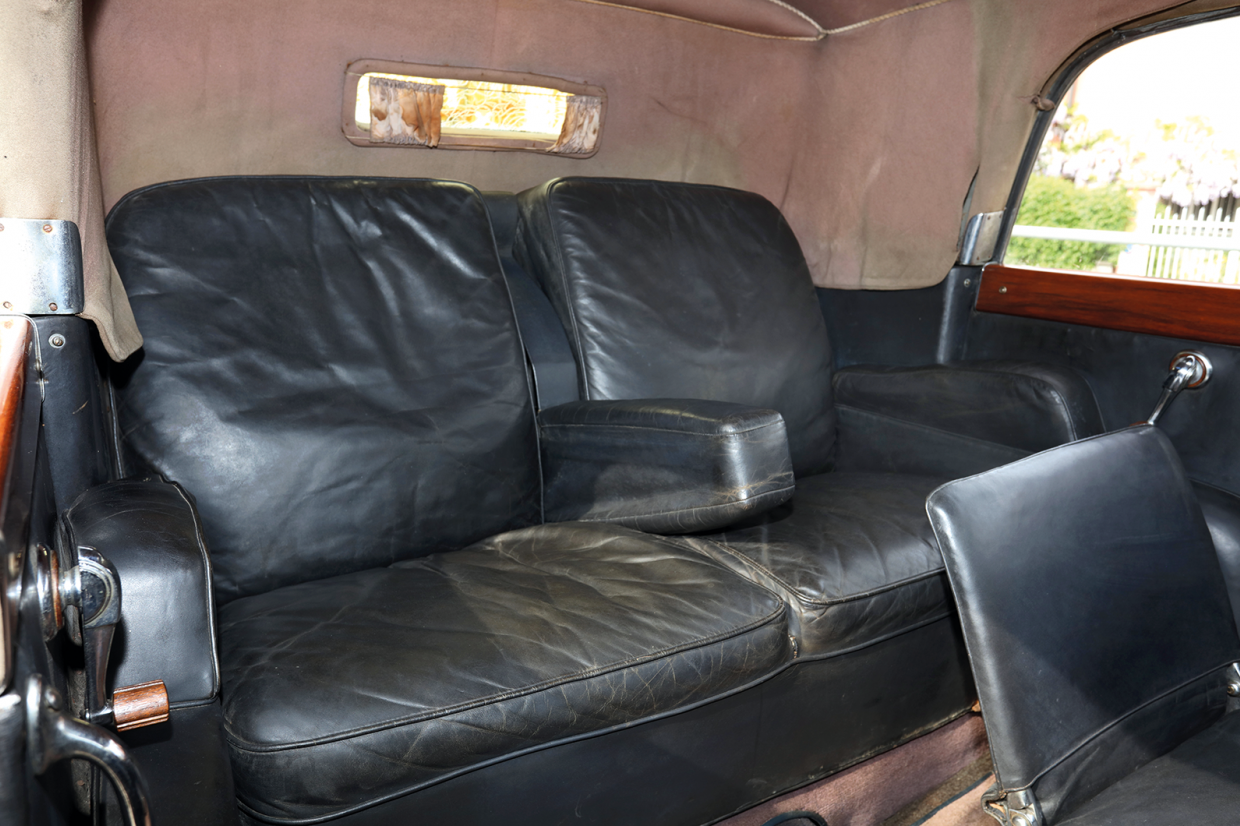 Alceste is packed with fascinating details, such as the beautifully finished, highly detailed doorhandles that look like pieces of family silver.

The rather clumsy outside door hinges, on the other hand, look slightly out of place on such a finely crafted example of the Italian coachbuilder’s art.

Inside, there is something creepy about the faded staining on the crumpled tatters of the rear window sunblind, but you cannot deny the simple elegance of the veneers or marvel at the way the faux B-posts fold themselves away when you roll down the centre windows.

The windscreen hinges out at the top, helping the driver to keep cool on a hot day.

There are occasional folding seats in the back and slightly dry dark-blue leather throughout. From the high-set rear throne, you can look through the glass division into the chauffeur’s compartment at the dashboard and beyond. 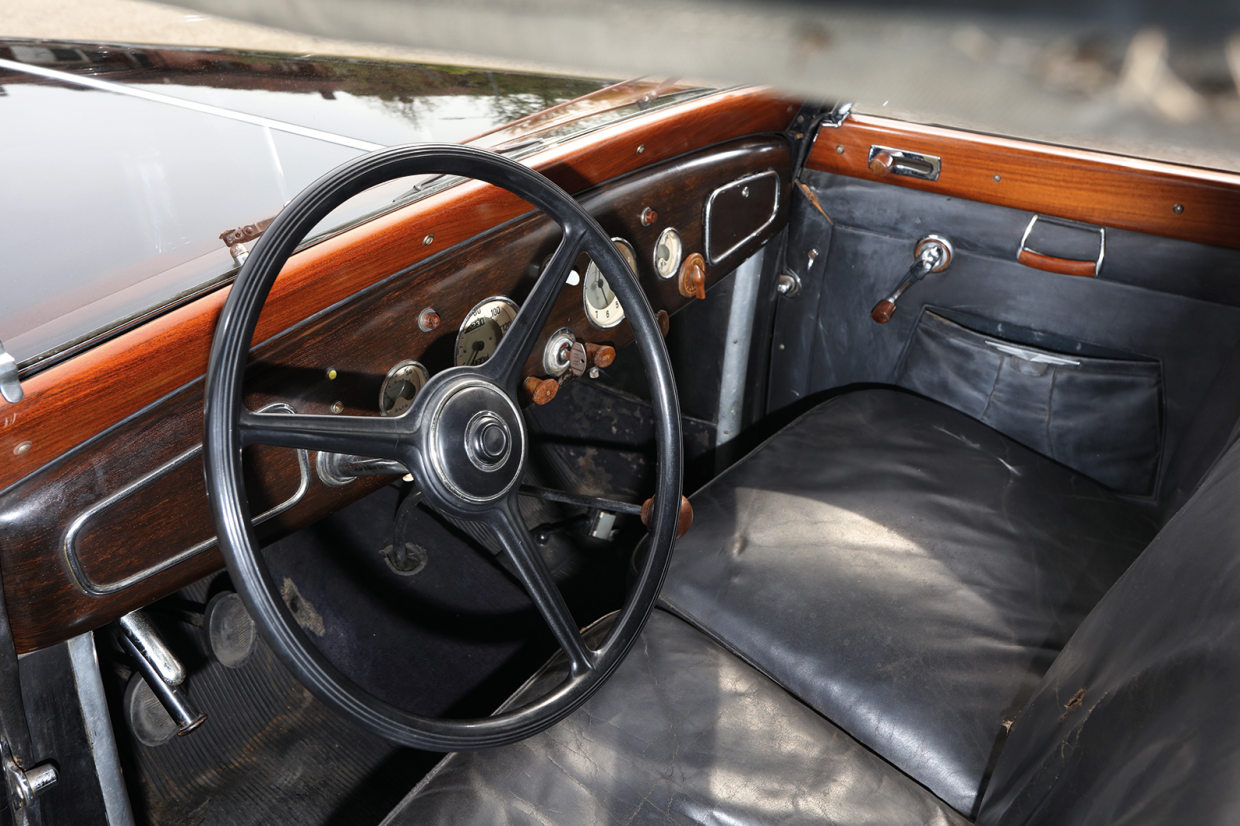 The driver, ideally quite a short individual, surveys a modest selection of cream-faced instruments and a smattering of Bakelite switchgear; 80-plus years have almost worn away any clues as to their individual functions.

Turn the big wind-up-toy ignition key, press the starter button and the straight-six rumbles into life beneath the centre-hinged bonnet.

There is not much to see there, just a single Zenith carburettor above a cast-iron manifold, an ugly air-cleaner canister and a chromed external coolant pipe running alongside the big, black rocker cover.

Neither is there much to report from the driver’s seat of this two-ton, 85bhp, 81-year-old behemoth.

I can only confirm that it does indeed stop, and go around corners, after a fashion. The idea here, as the chauffeur pumped the floor-hinged pedals, shuffled the big, truck-like steering wheel and manoeuvred the 2ft-long bent wand of a gearlever, would simply have been to make sure their passengers’ progress was as seamless as possible, and try to make it all look easy. 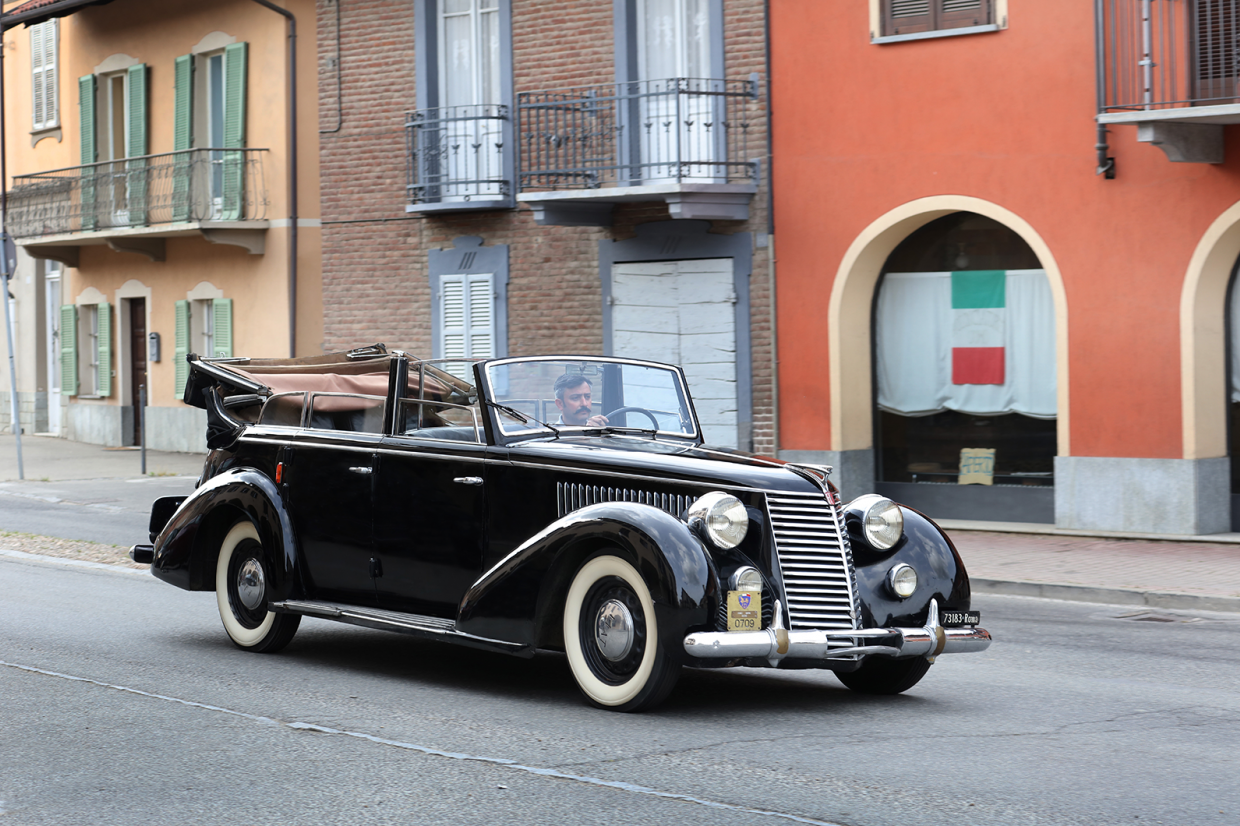 ROMA 7 3183 is almost entirely original, other than perhaps its whitewall tyres, a long-forgotten repaint and the coveted ASI brass plate that certifies its historical significance in Italy.

Who knows which of the usual suspects from those times have sat in the sumptuous rear seats with their gigantic triple armrests, or glanced through the slot-like rear window in the huge, fully lined hood.

Unfortunately, when lowered this colossal roof makes the Fiat look like a giant Silver Cross pram.

It is a much happier-looking thing with the soft-top erected, with a massive dignity that successfully eclipses the taint of the various unsavoury characters who may, or may not, have ridden in the back. 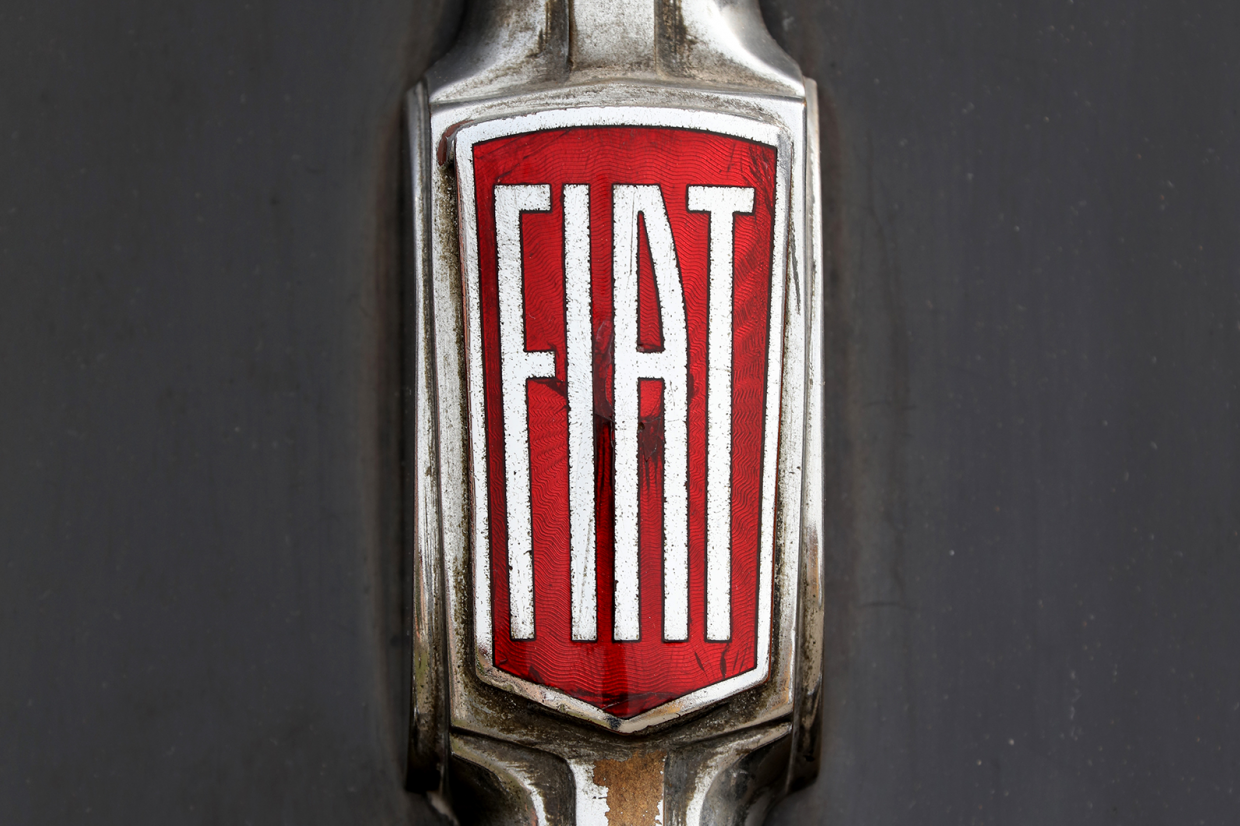 Why the Volkswagen Kübelwagen deserves its classic status 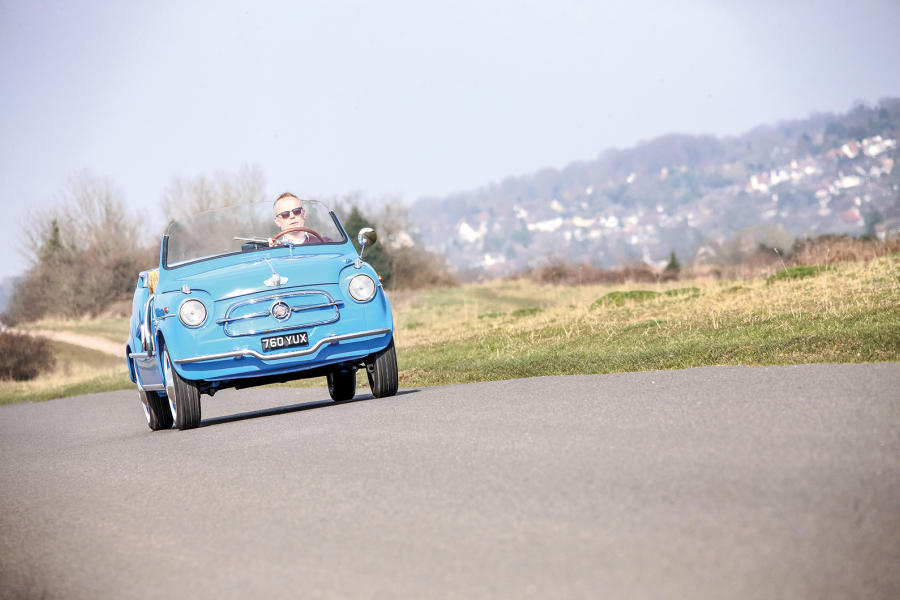 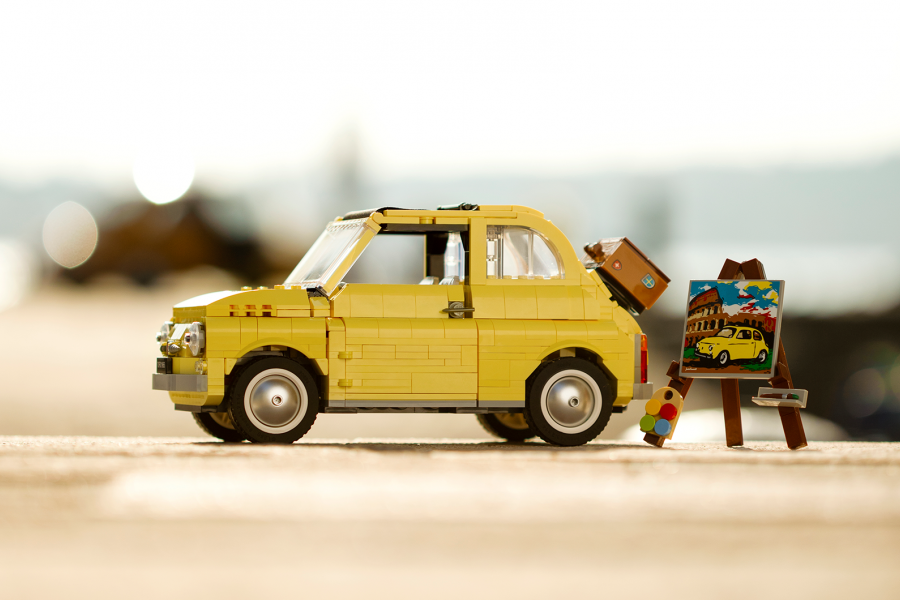 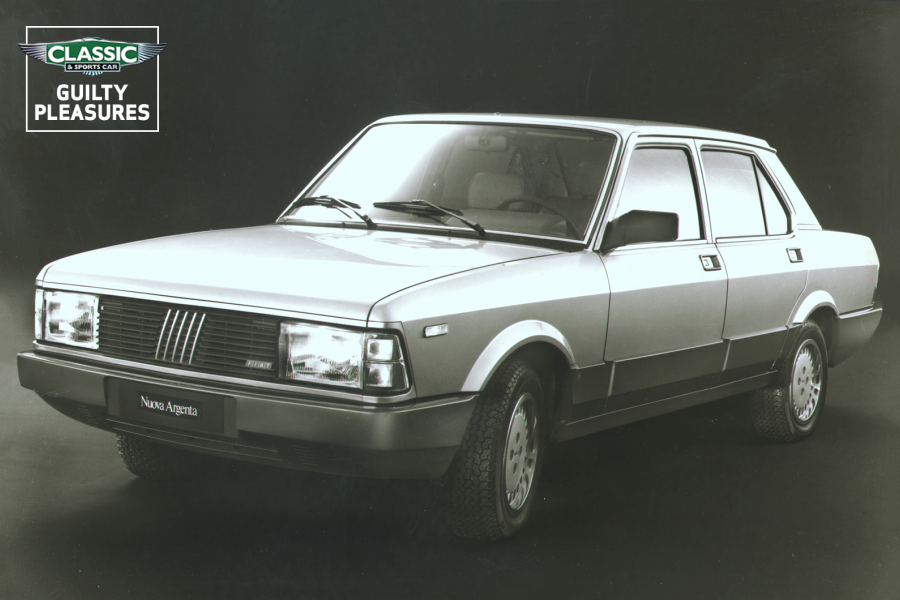 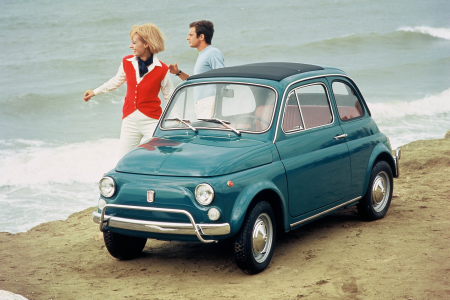 Fiat at 120: the Italian marque’s greatest hits and miss