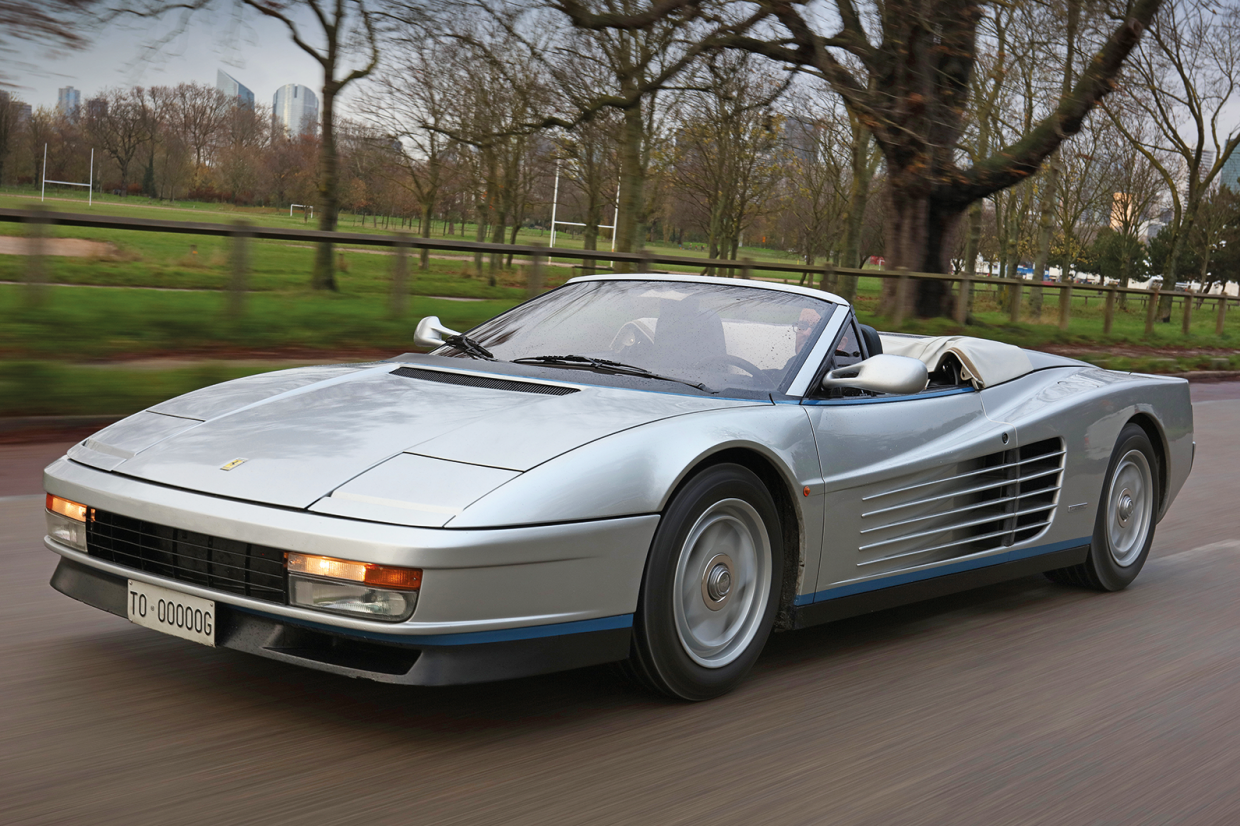 Giovanni Agnelli was the Italian tycoon from Central Casting.

Born into enormous wealth and married to a fellow aristocrat, he eventually came to own most of Italy’s car industry, two of its major newspapers, one of its biggest football clubs and a ski resort.

At one point, he was involved with companies that between them made up 25% of the country’s stock market, and he did it all with a natural ease, charm and style that enabled him to mix with heads of state, political dynasties and international powerbrokers.

This was a man who counted Henry Kissinger among his friends. 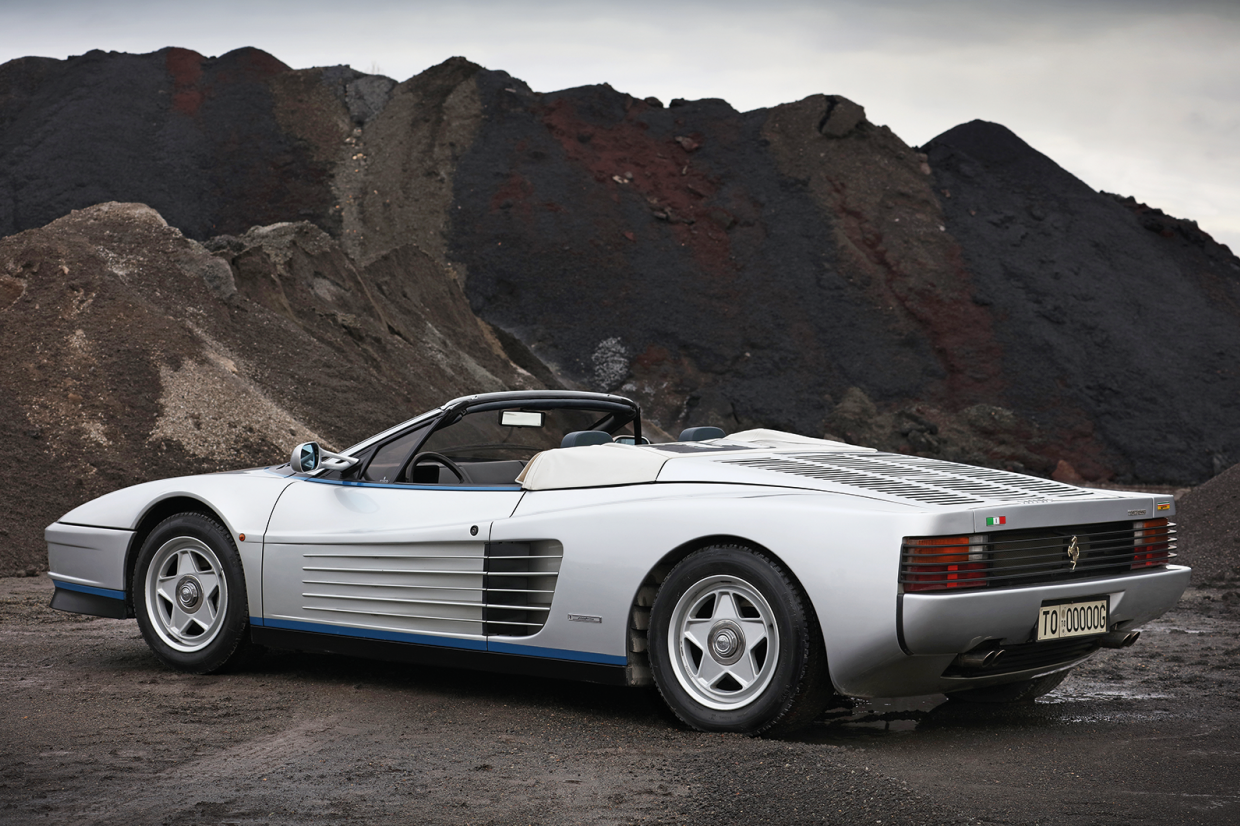 Where Silvio Berlusconi was all gaff-prone buffoonery and something of a laughing stock, Agnelli was grace personified, a man from an earlier era who became a fashion icon as well as one of Europe’s richest people.

When he retired in the 1990s, one commentator referred to him as “the uncrowned king of Italy”.

Agnelli was the grandson of one of the founders of Fiat – who was also called Giovanni – and born on the family estate in Villar Perosa, near Turin, in 1921.

He served in a cavalry regiment during WW2, and also managed to qualify in law, which earned him the lasting nickname l’Avvocato – the lawyer.

Following the war, he not surprisingly seemed more interested in being a playboy than settling into the family business – and he certainly had the means with which to pursue that course.

He was a regular in the casinos and ski resorts of Europe, mixing with the likes of Prince Rainier and being romantically linked to, among others, Rita Hayworth, Anita Ekberg and socialite Pamela Churchill Harriman. 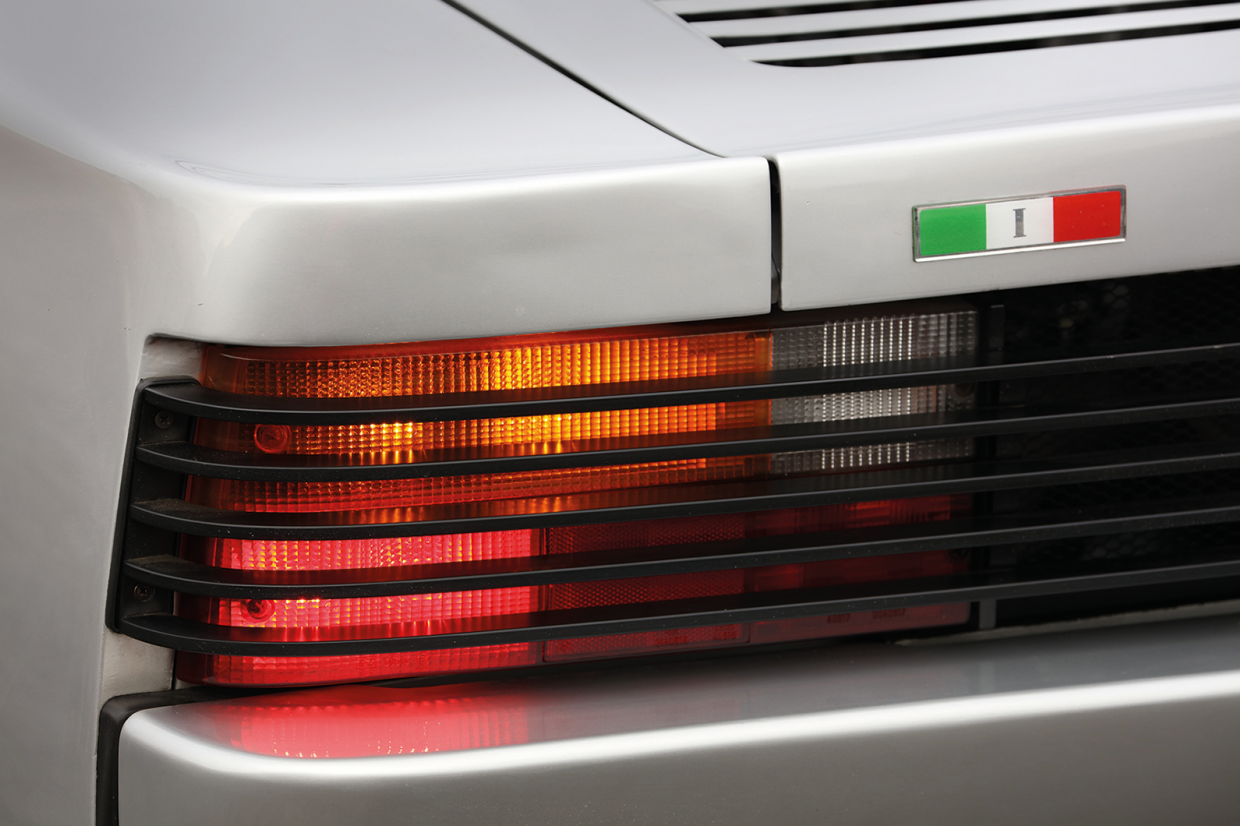 The Testarossa’s famous strake theme extends to the rear lights, too

A serious car accident in 1952 led to him changing his outlook somewhat and focusing more on Fiat.

He married Marella Caracciolo – daughter of Don Filippo Caracciolo, Prince of Castagneto – and went to work as vice president alongside Vittorio Valletta.

The latter retired in 1966 and handed over to Agnelli control of a company in good health.

Over the course of the next three decades, Fiat’s fortunes ebbed and flowed, but even in the most turbulent of times Agnelli’s standing seemed hardly diminished.

Having spent the first 30 or so years of his life keenly pursuing a hedonist dream, he settled effortlessly into the role of elder statesman.

As you’d expect of a man who was at the head of Fiat, Lancia, Alfa Romeo, Maserati and Ferrari, Agnelli was a passionate car enthusiast.

And it wasn’t just exotica, either. 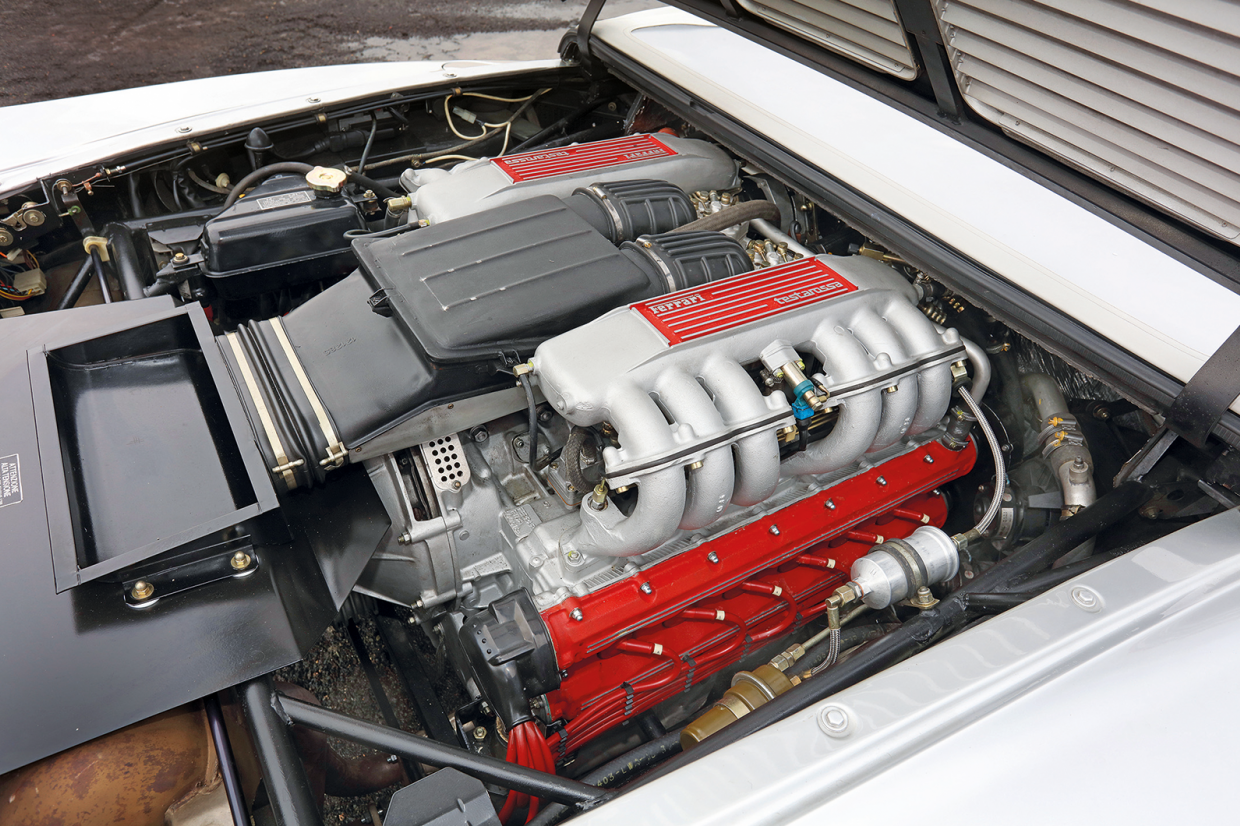 He kept a fleet of Fiat Pandas, for a start, including one of the Moretti-built Rocks, as well as a brace of 130-based estates (C&SC, May 2013).

Even well into old age, Agnelli drove himself around.

“The chauffeur never drives,” he once said. “I always [do], it’s a habit of mine.

He also had a weakness for open-top cars, ordering a Lancia Delta Integrale Spider that he used during the summer in St Moritz, as well as the car that you see here. 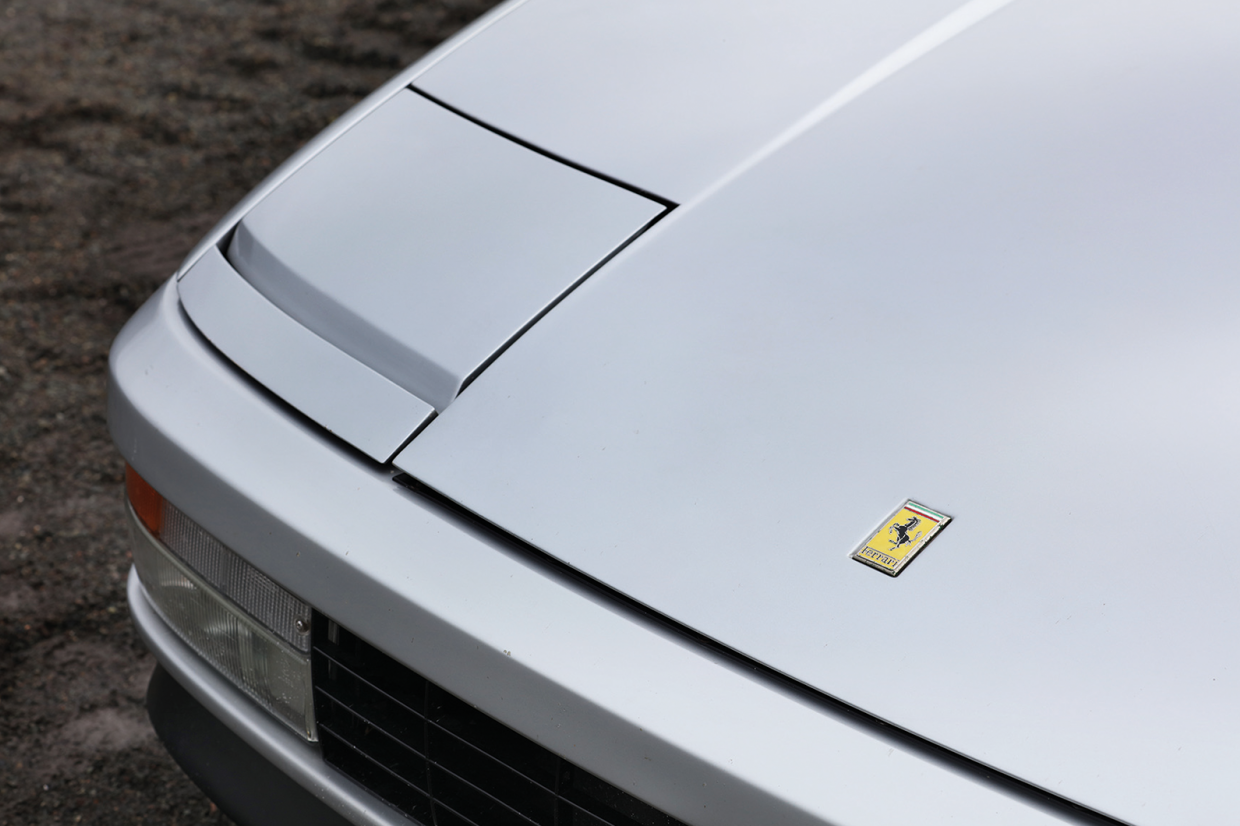 The Ferrari Testarossa features a pair of distinctive pop-up headlamps

It is the only Testarossa Spider that was officially commissioned and built in-house by Ferrari, and was constructed especially for Agnelli.

The paint, for example, links the first two letters of his surname to the periodic table abbreviation for silver – Ag.

The blue striping is a bespoke touch, too.

By the time that it was delivered to him in 1986, it had been two years since the standard model was launched at Paris’ Porte de Versailles.

Evoking the name of a famous sports-racer from the 1950s, the Testarossa was a development of the Berlinetta Boxer line but reworked by Pininfarina, which designed and built the body.

The intention was to bring the ageing flat-12 series up to date in terms of emissions and safety, and in many ways the model signalled Ferrari’s shift towards cars that were shorn of their idiosyncracies, becoming more user-friendly, comfortable and – in relative terms at least – practical. 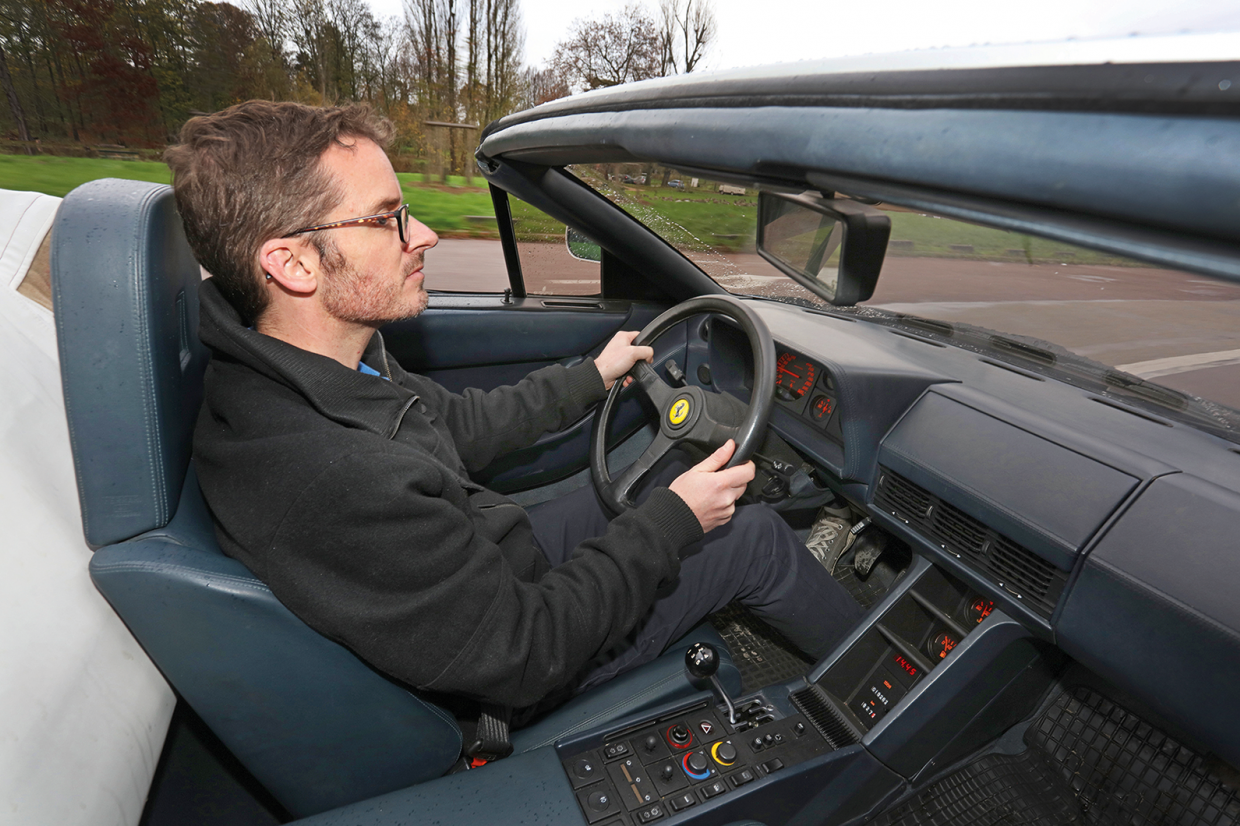 The radiators were therefore shifted from the nose to the back in order to reduce cockpit temperatures, with those signature side strakes being a necessary addition to the huge vents that were dictated by such a move.

It also meant that there was more room up front for luggage.

Thanks to the advent of turbocharged units and ground-effect aerodynamics, by the early 1980s the flat-12 engine no longer had a link to Maranello’s Formula One cars, as it had done throughout the 1970s.

Ferrari persisted with the famous unit, however, and though the Testarossa shared the 512BBi’s basic block, there were – among myriad other changes – new four-valve cylinder heads and an updated ignition system to give a power output of 390bhp.

The car’s wheelbase was extended, too, to give better weight distribution, and it was bigger all round than the previous model.

Picture one now and you will no doubt consider its width, which is accentuated – especially on the Spider – by its lack of height.

In truth, though, it is roughly as wide as a current BMW 5 Series, and doesn’t feel unwieldy from behind the wheel. 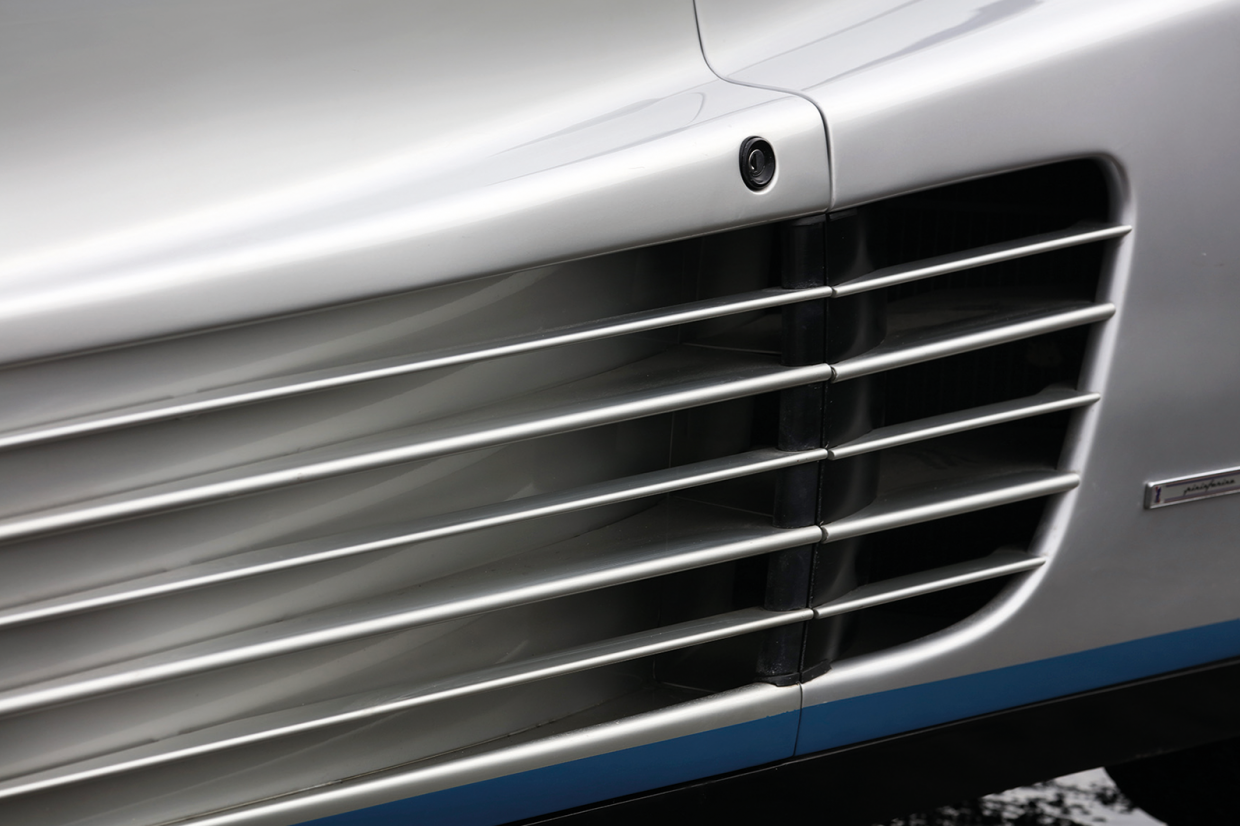 Our day with it begins at the premises of Charles Pozzi, the renowned marque specialist that was established by the late former racing driver.

Navigating small side-streets and heading west to Paris’ suburbs, it’s difficult to imagine yourself in Agnelli’s place, gunning the Ferrari up a mountain pass or heading to the coast for lunch in a glamorous location with Marella in the passenger seat.

Inside, it’s pretty much standard Testarossa, which means a dashboard composed entirely of straight lines, plus orange dials – the ones for the water temperature and fuel level joining a digital clock in the centre console.

Further back along that lie myriad switches, levers and knobs. I discovered what some of them did; others remained a mystery.

Mechanically, the Agnelli Spider is identical to the production berlinetta. The pedals are offset towards the centre of the car while, at low speed, the clutch and unassisted steering are both heavy. 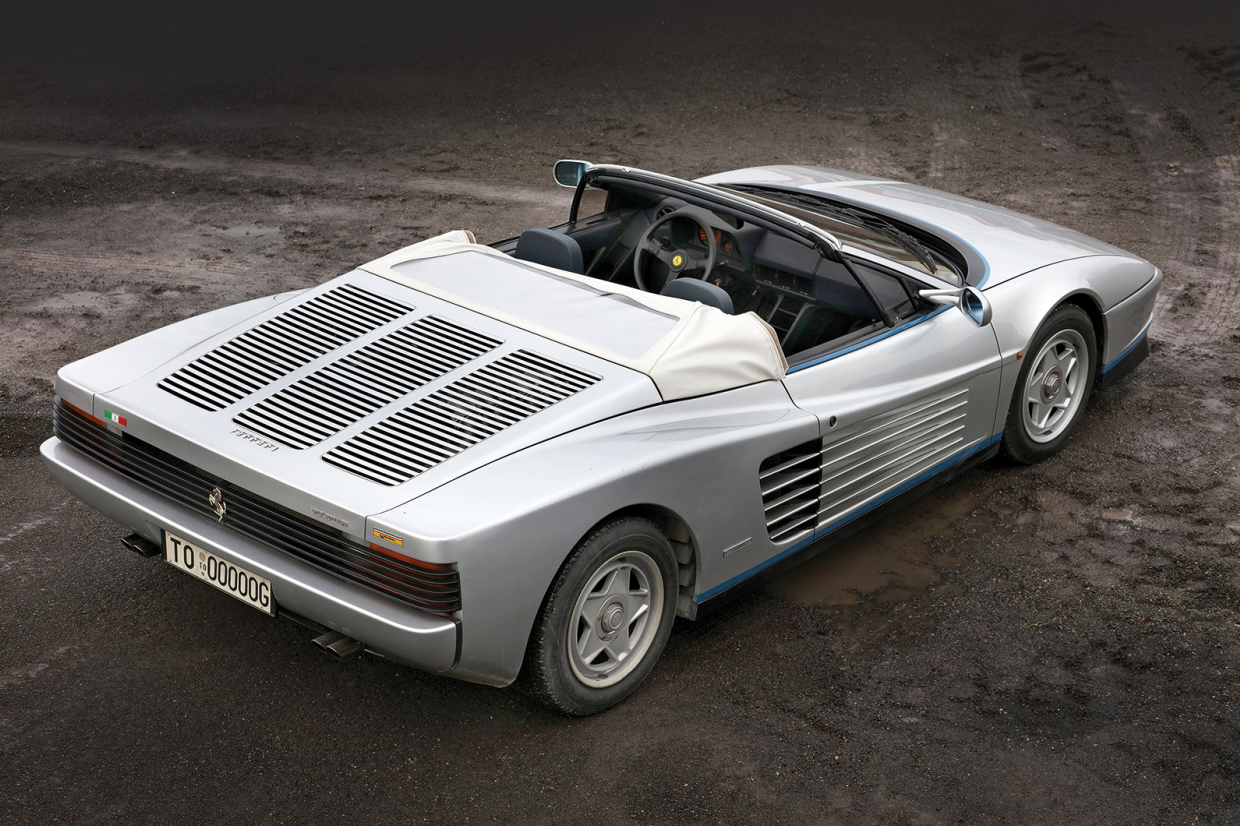 The louvres in the rear deck help to break up the large panel, as well as keeping things cool

In all other respects, it’s a surprisingly benign and easy thing to drive.

The tall first is on a dogleg in the traditional open gate, but such is the torque on offer from the big flat-12 that gear selection is all but redundant.

On damp roads such as these, even modest throttle openings are enough to unstick the rear Michelin TRXs, yet the initial surge isn’t as instant or as eye-opening as you might expect.

Where the Testarossa really scores is in its long-legged nature, a feeling that it just won’t stop pulling.

It’s never anything other than turbine-smooth, and by the time that you’re over 4000rpm it’s really starting to get under way, and certainly going far more quickly than is prudent on urban Parisian roads.

The sound, however, is surprisingly discreet – even when provoked in one of the French capital’s long tunnels.

It is, by all accounts, steady as a rock well into three-figure speeds, the perfect car for Agnelli to surge along the autostrada. 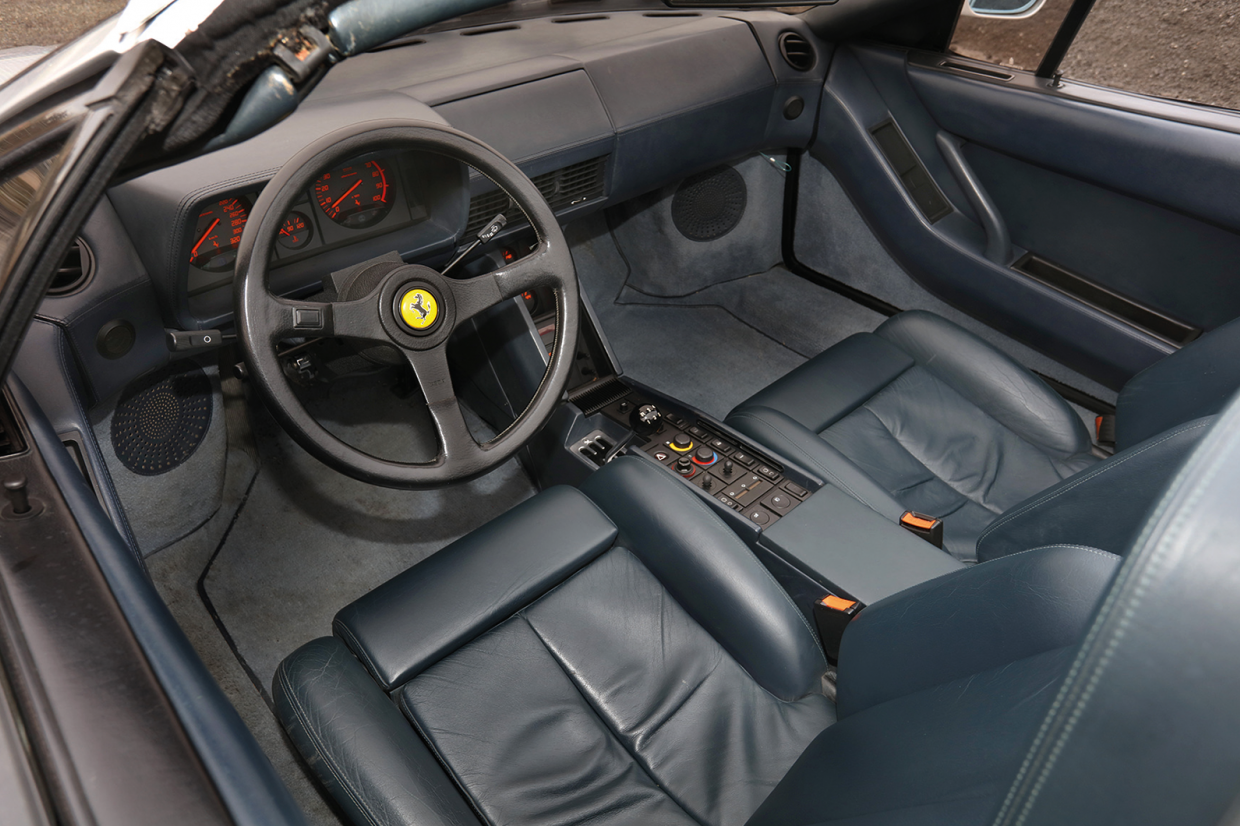 It also rides well and feels remarkable solid, Ferrari clearly putting a huge amount of thought into the extra strengthening dictated by lopping off the roof.

Not that I mean to reduce this car to being merely a Testarossa chop, because that would be very far from the truth.

Instead, it is a well-resolved design, from the way in which those distinctive sides merge into the vast rear panel, to the layout of the white hood.

It is beautifully thought out, right the way down to the removable wind deflector that clips into place along the top of the windscreen frame.

And that’s not all.

Agnelli also had in his collection an F40 that had been fitted with the Valeo gearchange system, which uses an electro-mechanical actuator to operate the clutch rather than a traditional pedal. 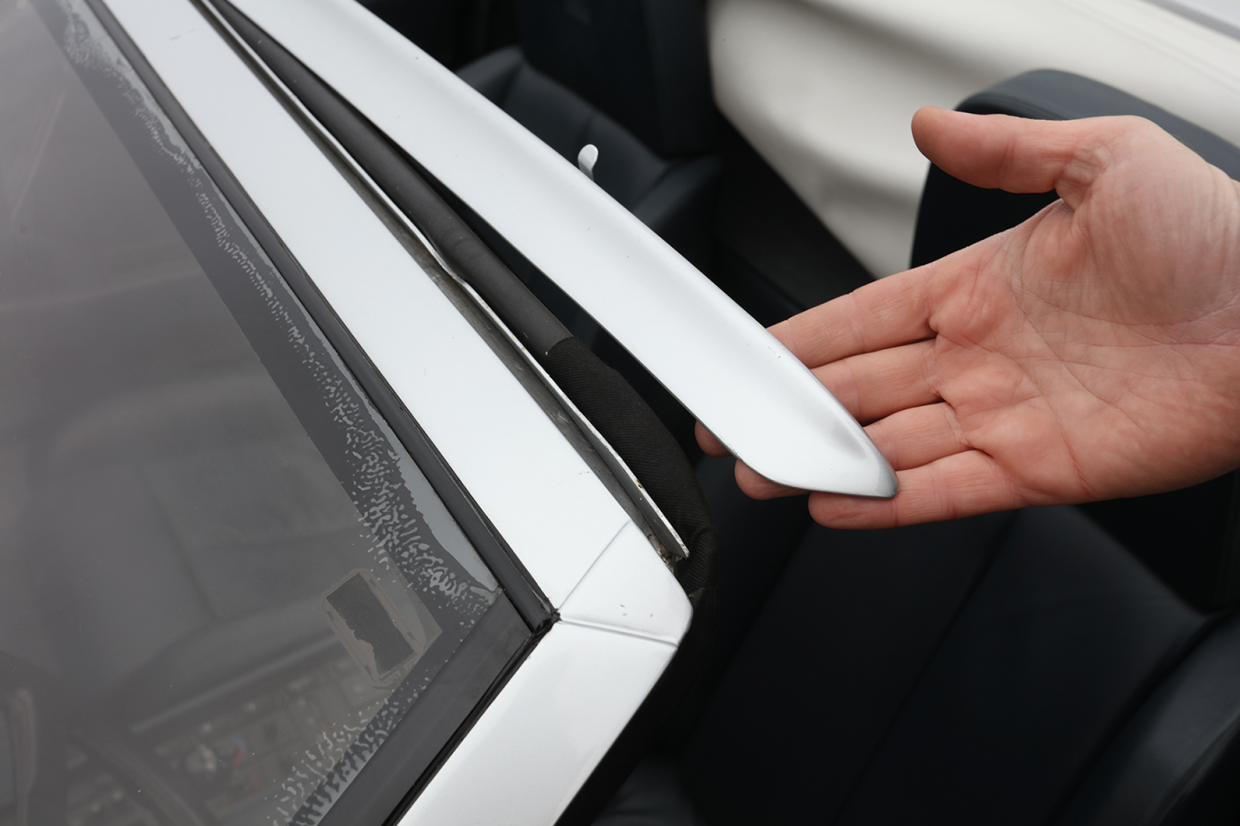 It was initially developed for Lancia’s rally cars before, many years later, being fitted to a small number of Mondials.

In operation, if not execution, it’s a little like Citroën’s C-Matic – you just move the gearstick, doing nothing with your left leg, and the clutch is engaged and disengaged automatically.

Quite by accident, while Artcurial’s Matthieu Lamour is scrolling through the various buttons on the Testarossa’s centre console, he finds an unmarked one that retracts the clutch pedal.

It would appear that this Spider was given the same treatment as the patrician’s F40.

It’s touches such as this that make the Agnelli car unique.

Other Testarossa Spiders were made – the Sultan of Brunei had at least two – but they were unofficial conversions, albeit in some instances produced by Pininfarina.

Agnelli held on to it until his death in 2003, when it passed to a friend with whom he used to play poker. 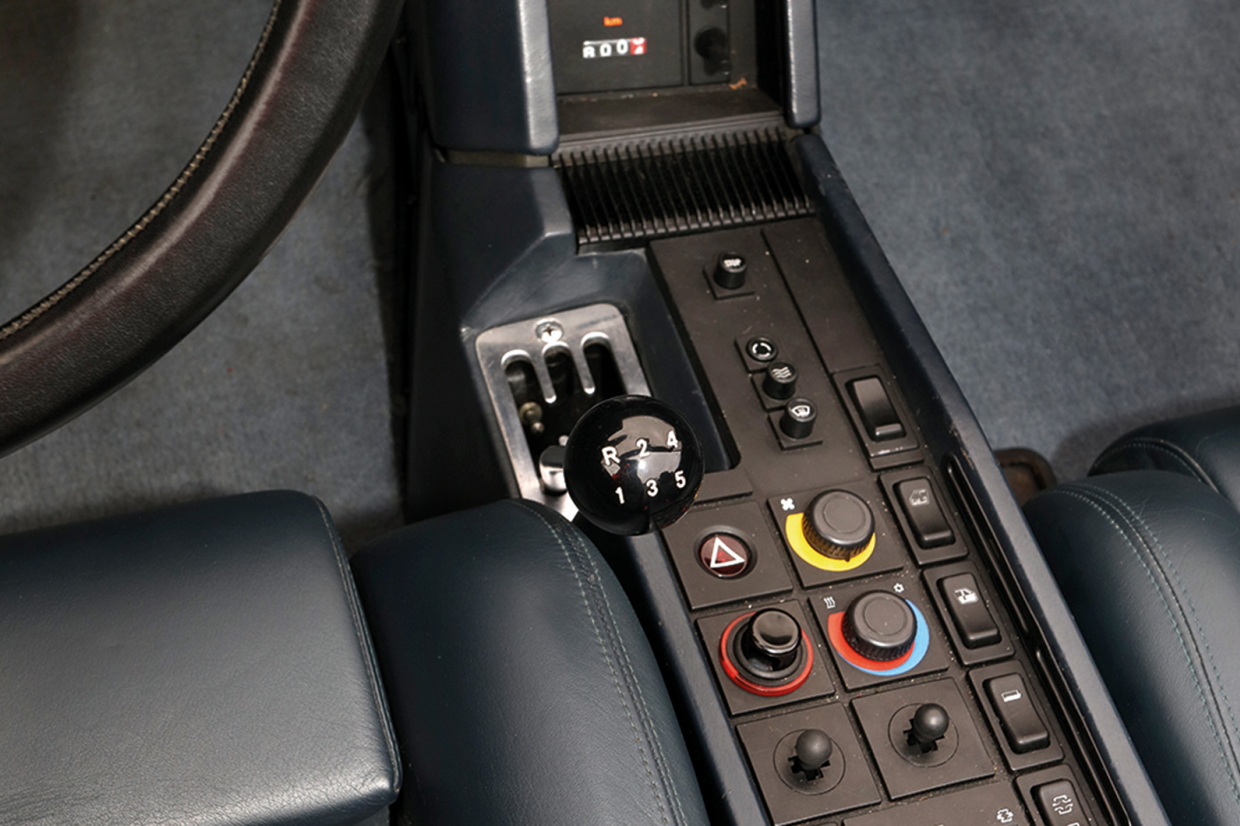 Fiat had suffered a dip in fortunes throughout the 1990s, and there was also personal tragedy to deal with.

His only son – Edoardo, who had struggled to find his way in life and was never considered as a potential successor to his father – committed suicide in 2000.

Three years earlier, his nephew, who was also named Giovanni, had succumbed to cancer at the age of just 33.

Agnelli himself officially retired in 1996, but retained a high profile.

After he died, the Fiat production line was momentarily paused in tribute to him.

As for the Testarossa in general, for a long time it suffered something of an image problem, but its stock has been on the rise for a while.

And that’s nothing more than it deserves because, Miami Vice and Out Run connotations aside, it is a sublime super-GT – luxurious, well equipped and possessed of epic pace. 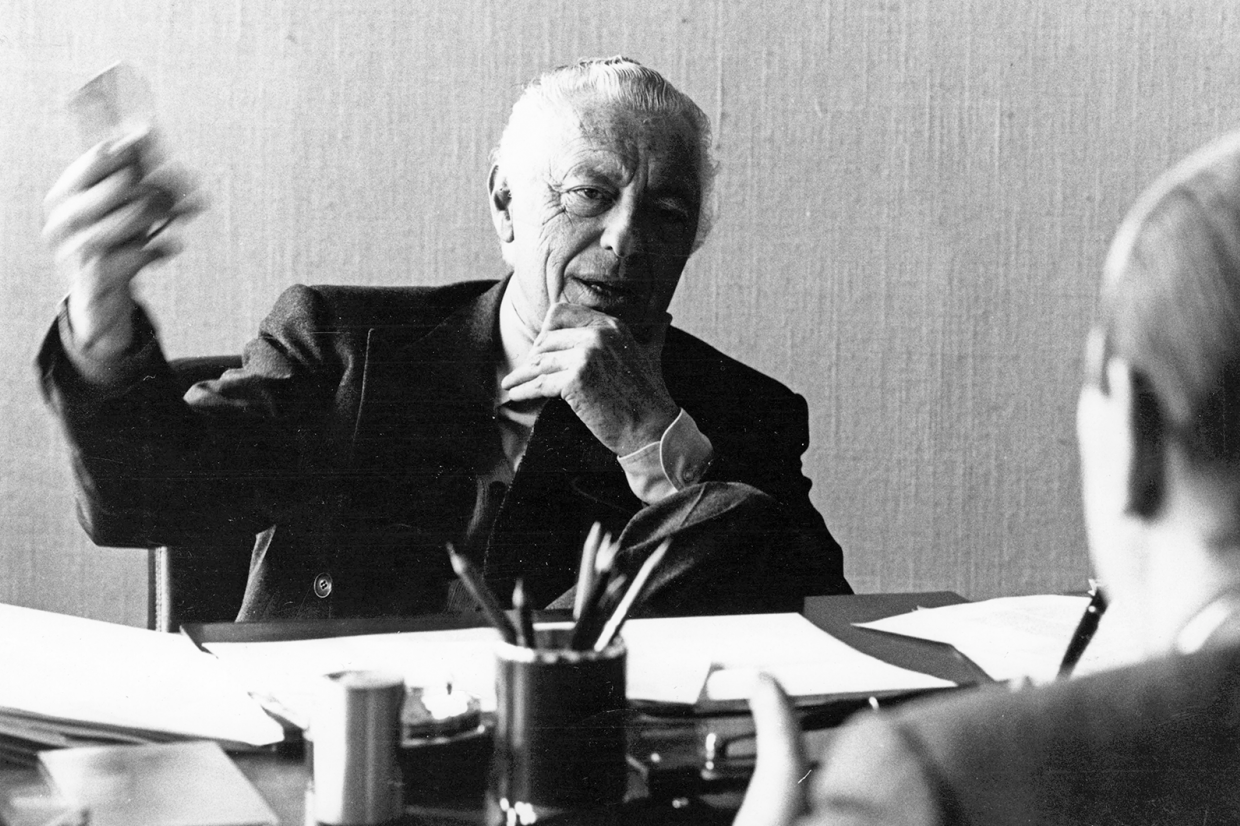 The fact that this example is a one-off, a carefully engineered gift to one of the most influential figures in modern Italian history, raises its standing yet higher.

And in silver, it even manages a level of subtlety and discretion that you wouldn’t expect of a Testarossa convertible.

Where it could easily have been vulgar, it is instead cool and stylish – although it could be argued that much of that is down to the reflective glow of its first owner, as well as the renaissance of 1980s cars in general.

“Everybody tries to be a playboy,” Agnelli once said. “Some manage it, others don’t.”

This was originally in our February 2016 magazine; all information was correct at the date of original publication 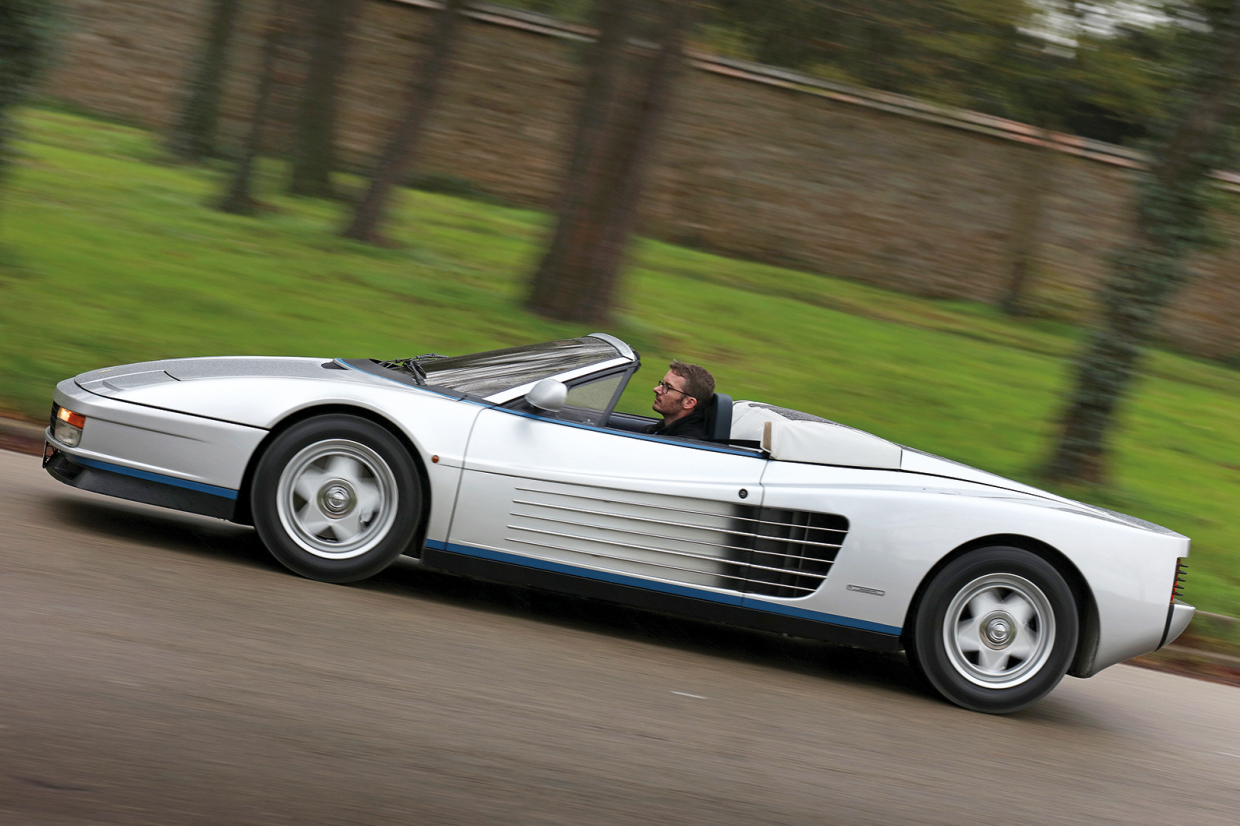 20 of the best Pininfarina classics 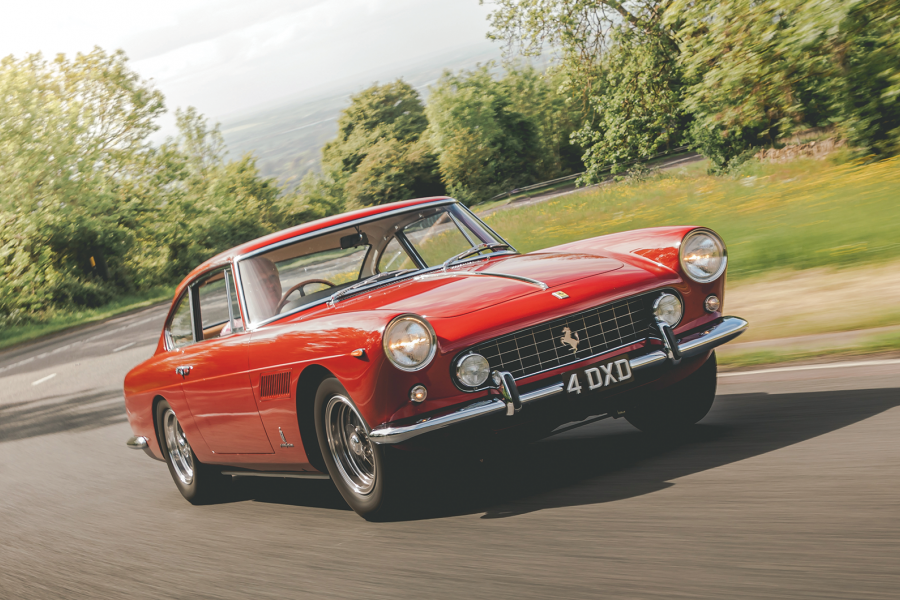 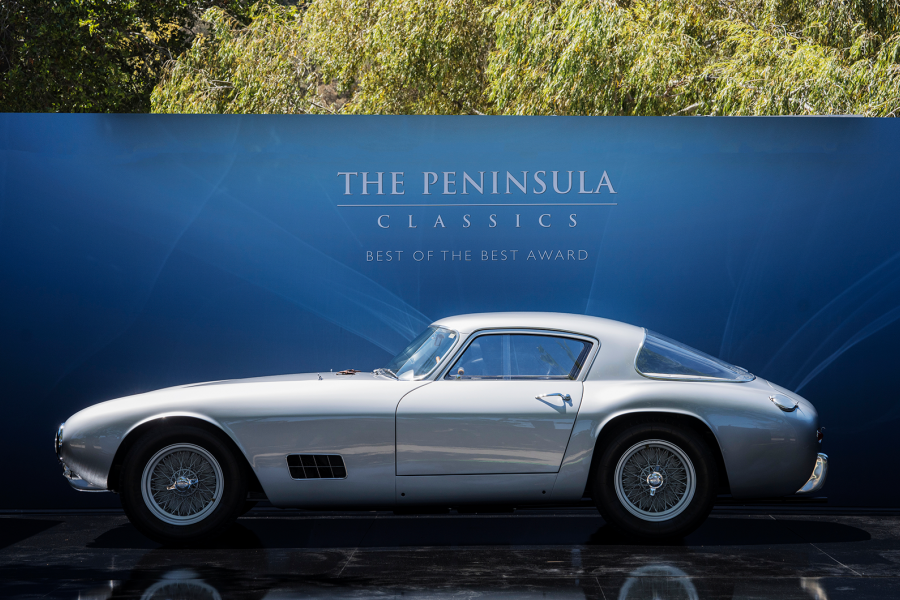 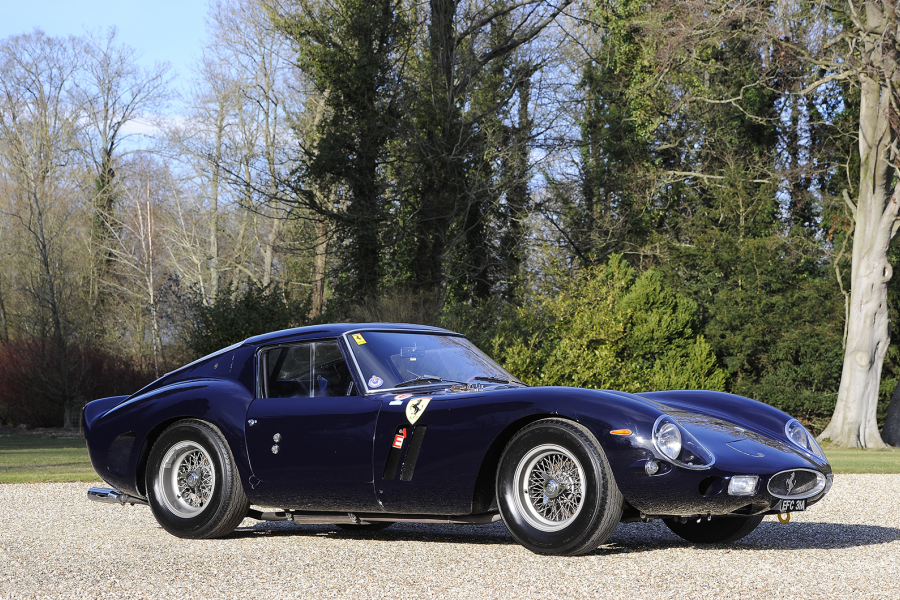 75 years of Ferrari at Concours of Elegance 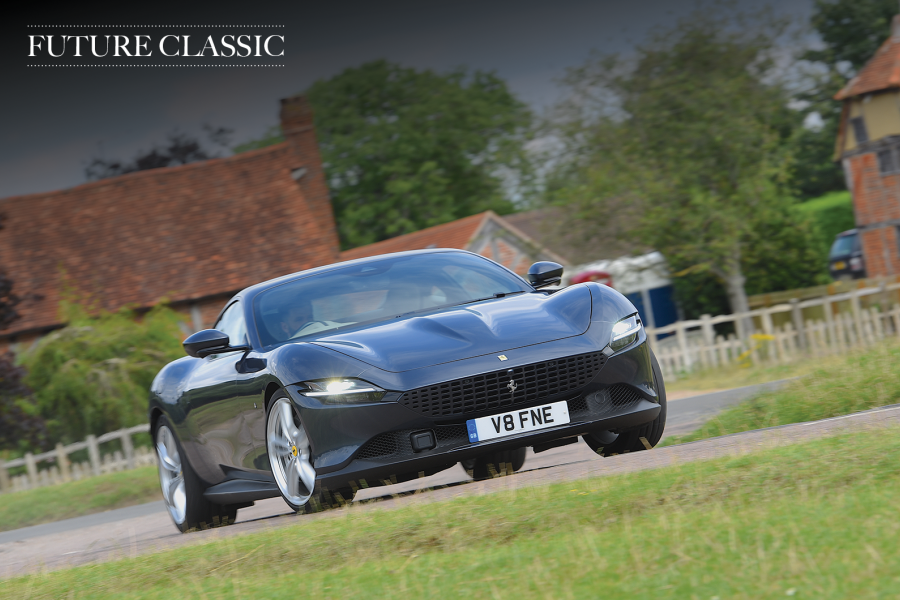 Datsun 240Z vs Triumph TR6: the battle for America