The incredible story of the futuristic Phantom Corsair 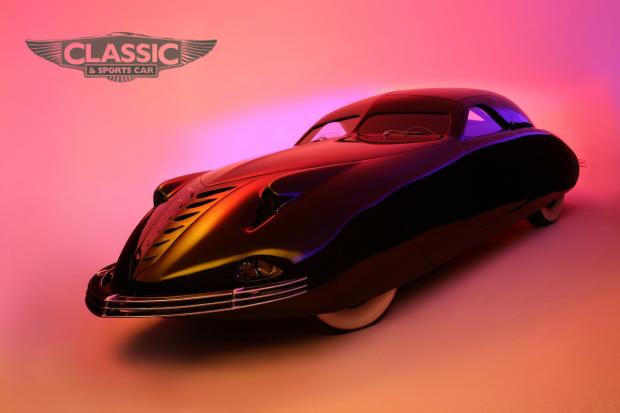 The spirit of tragic millionaire Rust Heinz can be felt through every nuance of his personal dream car, the sensational Phantom Corsair. Mick Walsh exclusively examines the 24-year old’s remarkable legacy with photography by Julian Mackie

The pioneering Heinz dynasty could have inspired Orson Welles, and its sagas of self-made fortunes, divorces, suicides, alcoholism, fatal car and aircraft crashes would have been far more gripping than The Magnificent Ambersons. In American industrial history they were to food what Ford was to automobiles and the Rockefellers to oil.

Adding spice to the tale is the tragic story of Rust Heinz and his fantastic concept car, the Phantom Corsair. Born at the outset of WW1, ‘Rusty’ as he was better known, was the son of HJ Heinz, the Pittsburgh millionaire who made his fortune in canned food.

The popular, good-looking youngster was straight out of an  F Scott Fitzgerald short story. At college ‘Rusty’ had a reputation for being high-spirited and, after the best education money could buy – Choate, Andover and Yale – he became frustrated with academic life. At Yale he focused on naval architecture and started designing and racing his own speedboats. Yet the temptation of California proved too much for Heinz junior and he gave up his last year at Yale to move west in 1936, much to the despair of his immediate family.

After moving in with a favourite aunt in Pasadena, he opened an industrial design studio. All through college ‘Rusty’ had talked about and sketched a dream car. Once based in California he immediately started searching out the best coachbuilders in town to discuss its construction. By chance the famed partnership of Swedish-born Christian Bohman and Austrian Maurice Schwartz was in Pasadena.

This talented duo had already made a reputation building bespoke transport for movie stars. Their portfolio included two sensational Duesenbergs: Clark Gable’s custom roadster and Dr Mudd’s radical Model SJ fastback. Heinz was impressed by the European artisans, and work started in early 1936 on his dream auto which he hoped would be the flagship to promote his new firm. Together with Bohman & Schwartz , he produced a series of wood and clay scale models to develop the shape. Story has it that Heinz even did some windtunnel testing.

His parents disapproved of the project but thankfully his aunt agreed to fund its expensive construction. Heinz had plans for limited production and even announced a price of $14,700: twice as much as a Cadillac V16 coupe. Estimated costs to build the prototype vary from $24,000-35,000, which sounds  when you consider that the donor engine and front-wheel-drive subframe were from Heinz’s Cord 810 sedan that he bought new in 1936.

Once Heinz had agreed on the body style, the small team at Bohman & Schwartz  quickly progressed with the build during late ’36 and early ’37. Schwartz made wooden formers for its menacing streamlined shape while tin man Bill Williams did most of the hammerwork. Most of the panels were beaten and rolled out of aluminium, and fitted over an inner tubular steel frame. A local firm in Vernon built a new cross-braced chassis, mated up to the Cord front-drive assembly, and Heinz stayed with the original 125in wheelbase. The body weighed 700lb more than the donor sedan, and that hefty total of just over 2 tons handicapped performance.

In similar fashion to Paris-based coachbuilder Figoni et Falaschi, Heinz went for an enveloped body but without the separate wings and running boards of its show-stopping Delahayes. To allow the front wheels to turn within the body, the sides had to be much wider than a standard Cord. Heinz’s modernist shape was far more radical than the French streamliners, following the theories of German designers such as Paul Jaray and Baron Reinhard von Koenig-Fachsenfeld.

Heinz’s dream machine was much more than a rebodied 810 and its many advanced features complemented its amazing form.

Details included flush electric pushbutton door operation, green-tinted triple-layer safety glass, hydraulic impact bumpers, foglights that could be seen from the side and a broad front bench seat that could seat four. Provision for two extra passengers in the back proved claustrophobic. The inside of the body was extensively insulated with cork and a layer of rubber for further refinement.

Heinz must have had an instrument fixation because the dash was flush with a dozen instruments including compass and altimeter to match the stylish original Cord dials. The aviation theme continued with a switch box mounted above the central windscreen pillar. Even a warning light signalled ‘door ajar’.Other developments included a multi-wave radio with twin speakers plus a thermostatically controlled air-conditioning and heating system.

Not surprisingly, the radical streamlined front created cooling problems for the Lycoming  L-head sidevalve 4.7-litre straight-eight, which needed two Lincoln radiators to stop it boiling in the California heat. Heinz claimed 190bhp against the Cord’s stock 125bhp and an optimistic 120mph top speed, but later renovation work revealed that the engine had no special tuning.

As soon as Bohman & Schwartz  had completed the newly christened Phantom Corsair (no one seems to know why it was so called), Heinz started pulling in his Hollywood and media contacts to promote the machine. The July ’37 issue of Esquire ran a full-page colour drawing and Heinz ran it down to Warner Brothers’ studio to be photographed. Bizarrely he decided to change the colour for this shoot and sprayed the Phantom with a water-based light sand hue over the original black.

The interior was then trimmed in dramatic red leather. Frustratingly, the glossy brochure didn’t stimulate any orders, so Heinz agreed to the Phantom being used in the film The Young in Heart, starring Paulette Goddard and Douglas Fairbanks. Heinz even allowed the car to be re-christened The Flying Wombat for the film in which it is credited as an English model. In one showroom scene trick mirrors are used to display a full stock of ‘Wombats’ and, in later hand-tinted prints of the film, each car featured is a different colour.

Well into 1939, interest in the Phantom remained strong and Heinz even secured its display as ‘the car of tomorrow’ at the New York World’s Fair. Tragically, Heinz never lived to see his streamliner displayed in the Big Apple. In July the young millionaire flew back to his home town Pittsburgh to visit friends. Returning from a dance on a Sunday morning, Heinz allowed his friend Phil Brainard to drive his open Buick and during the journey Brainard’s hat flew off. After a detour to collect the trilby, the Buick ventured back on to the Lincoln Highway near Versailles and was broadsided by an unseen vehicle. Six people were injured in the crash and Heinz died the following morning from head injuries.

Shortly before his death, Heinz also designed a streamlined ‘Comet’ van – built by the Square Deal Body Company on an Autocar chassis for use by 57 Varieties for promotional work. Sadly this finned, high-cockpit vehicle doesn’t survive.

The Heinz family allowed the Phantom to be exhibited in New York in honour of their lost son, yet from there it went into storage until 1942 when Rust’s brother Henry Heinz II gave the car to a family friend, Lou Maxon, who was also MD of the ad agency that handled Heinz promotions. Maxon had the car transported to New York and, after a local Ford dealer had serviced and sorted the Phantom, his son was allowed to drive it as a post-graduation reward.

During the ’40s the Phantom changed hands several times and even ‘Speed King’ Andy Granatelli owned it and had the car resprayed metallic bronze in a Chicago paint shop. Most guardians either felt it attracted too much attention or, like Granatelli, discovered it was just too slow.

By the early ’50s, the Corsair was back in New York and the star of comedian Herb Shriner’s eclectic collection. Strangely, Shriner commissioned BMW 507 and Datsun 240Z stylist Albrecht Goertz to rework the Phantom’s front end in an attempt to improve its cooling. Goertz’s solution was to close up the central louvres and add two nostril style air ducts. Other modifications included a higher windscreen, targa-style lift-off roof panels, a radio antenna and crude gold and black two-tone paint scheme.

Shriner then loaned the Phantom to the Florida-based museum of Ed Jarvis but, after complications over storage charges, Shriner eventually reclaimed the car. In 1970 though, en route home with his wife in a Studebaker Avanti, Shriner became the second of the Phantom’s owners to be killed in a road accident.

Shriner’s estate was bought at auction by Tom Barrett, who quickly sold it on to legendary Reno-based hoarder Bill Harrah. After a year being restored to its authentic 1938 style, the Phantom Corsair became one of the star exhibits of Harrah’s amazing 1453-car collection. Here it kept company with a pair of Bugatti Royales and the 1907 New York to Paris-winning Thomas Flyer.

When Harrah died in 1978, the collection was pruned to become the National Automobile Museum but still in Reno. Many great cars were auctioned off but there was never any chance of the Phantom being sold and this dazzling, unique slice of motoring history remains as one of the collection’s most popular exhibits.