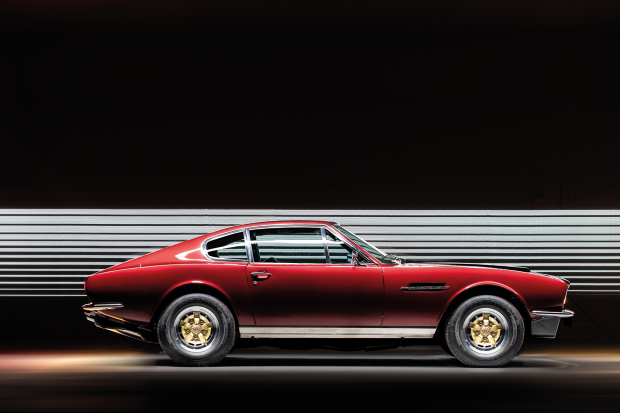 As Aston Martin values canter into seven figures for the most desirable models, it has become quite normal to see heady sums being forked out on concours restorations.

Yet the DBS, the car that was to lead the Newport Pagnell marque’s charge into the 1970s and beyond, has traditionally lagged behind, with owners reluctant to spend heavily on a car that might not be worth what they’ve invested once it’s finished.

That didn’t put off Keith Currington when he spotted 5 ECH, looking forlorn at a Surrey auction in August 2013.

“I had seen some fabulous restorations carried out on DB2s, MkIIIs, 4s, 5s and 6s, but had never seen a rebuild on a DBS V8 to that standard,” he says, “so that became my goal.” 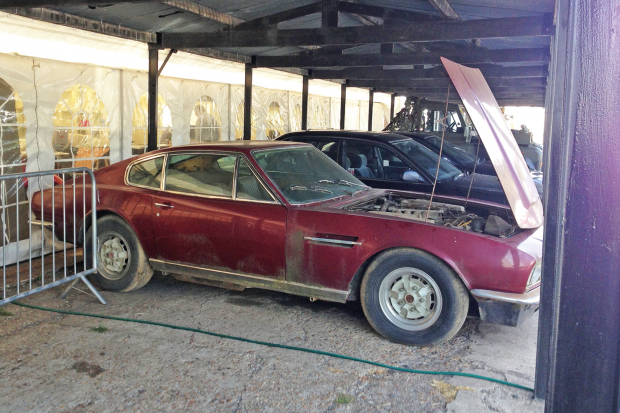 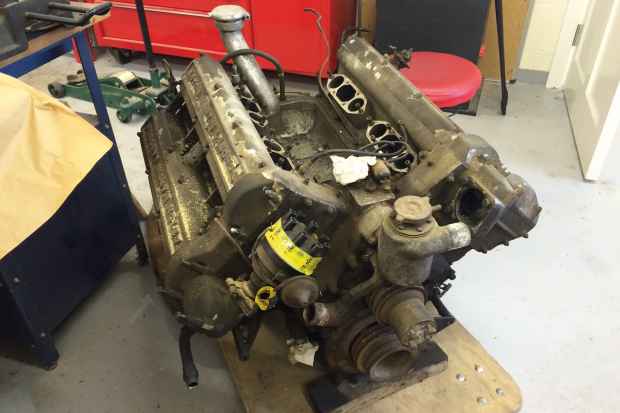 Left-right: the DBS in 'barn-find' state before auction; the V8 removed for stripping

Although the DBS was launched in 1967 with the same 280bhp twin-cam 3995cc straight-six as the DB6 it was designed to replace, Currington had his heart set on the 320bhp, 5340cc quad-cam V8 version that followed two years later.

Fitted at last with the engine that it had been designed for, the DBS had the muscle to match its looks, with 0-60mph in 6 secs and a maximum speed in excess of 160mph.

From the outset, Currington planned to build the very best DBS in the world, which is why the spec of this 1971 example fitted the bill: “With its matching numbers, manual gearbox, fuel-injected V8 and Armstrong Selectaride dampers, this was the perfect DBS – exactly as designer William Towns and chief engineer Tadek Marek had intended.”

The initial impetus for the five-year, 5000-hour rebuild, however, came from an unexpected source.

“In 2013 I sold one of my companies and my wife wanted me to slow down a little,” explains Currington. “I like fixing things in my spare time, and fettling cars with my friends was my favourite pastime when I was a young man.

“We also take on rescue dogs at home, and always say that our dogs find us – it was the same with this car. One Saturday morning, the Historics at Brooklands catalogue arrived at my breakfast table and the barn-find DBS simply jumped out of the page shouting, ‘Buy me!’” 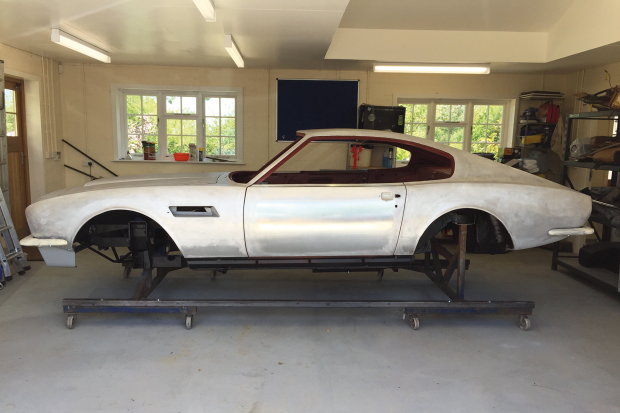 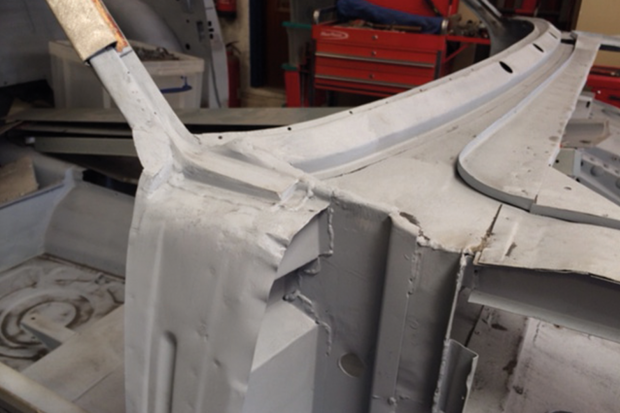 Left-right: the completed shell, ready for painting; replacement body sections were made by hand

“I enjoyed the era when this car was a glamorous vehicle on both the big and small screens. The DBS was the car of choice for Brett Sinclair [Roger Moore] in The Persuaders and James Bond [George Lazenby] in On Her Majesty’s Secret Service, and it cost well over £6000 when it was new – at a time when you could buy a new home for less money.

“In my opinion, the V8 is the most pure of all the DBSs, and it completes the series of original DB cars perfectly.”

When he acquired the Aston, it was complete but in very poor condition: “It had been left outside for 13 years with the windows open, allowing the rats to move in.”

He paid just under £30,000 at the sale – cheap today, but at the time a whopping 50% over estimate – and trailered the DBS home before setting to work dismantling it, carefully labelling and storing each component as he went. 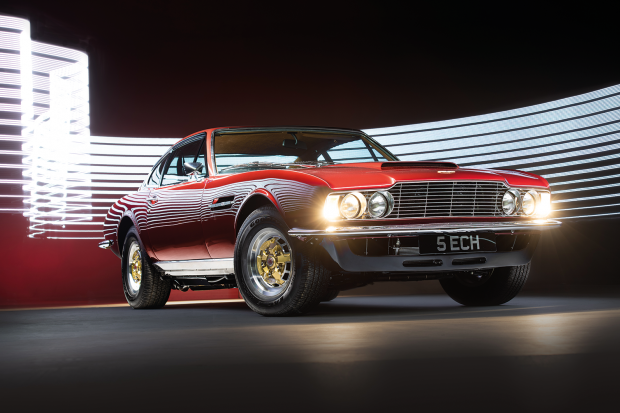 The non-standard gold alloys set off the Dubonnet Rosso paint

In spring 2014, the body and chassis were sent for shotblasting, with disastrous results.

“My heart sank when I saw just how serious the decay was – it had eaten into almost every area of the car. It also revealed a poor repair to a minor crunch in the front wing, and the sills were so bad I was sure the car would have broken its back had I stood on them.”

The shell was sent to marque specialist Classic Astons, which invested more than 900 hours restoring it, removing the front end to rectify the chassis and repairing the extensive body damage with handmade panels, ready for painting in the correct Dubonnet Rosso.

In the meantime, Currington stripped down the engine and running gear, sending the V8 to Classic Astons for rebuilding (a further 600 hours’ labour).

“Their knowledge of this car would be difficult to surpass,” he says, “and their meticulous attention to detail and passion for a high-quality result was as focused as my own.” 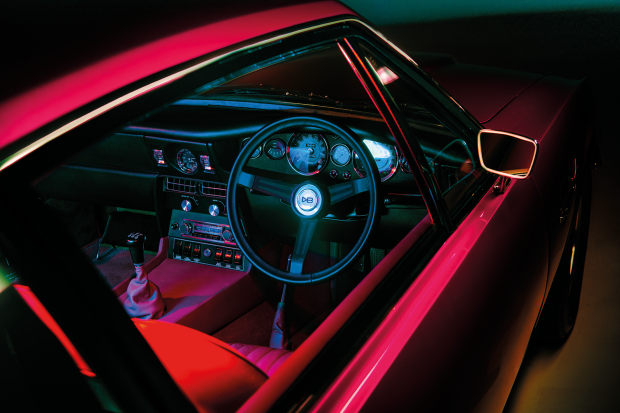 An example of that almost forensic focus can be seen in the decision to switch to modern, biofuel-resistant pipes during his overhaul of the fuel system.

Having initially obtained a set of original Aston Martin plastic fuel lines, Currington read reports of problems with degradation due to modern fuels.

As an experiment, he half-filled a jam jar with the latest pump petrol, cut a 2cm length of the pipe and left it in the jar to soak: “After just a few days it became soft and a little sticky, hence my decision to use up-to-date lines, designed for modern fuels.”

With the body and motor away receiving attention, Currington set to work refurbishing hundreds of other parts himself in readiness for their return.

“I replaced all seals and the internal bearings within the axle, using engineers’ blue to carefully examine wear and tooth engagement in the diff. Everything matched the specification as prescribed in the workshop manual.”

Any bits that couldn’t be renovated were replaced, with Currington turning sleuth to track them down: “Finding parts was easier five years ago, because folk were still breaking cars in preference to restoring them. I spent a number of evenings on the internet sourcing items that I would need.

“Rat urine had severely damaged the instruments, and one of the luckiest finds was a complete new set that had been removed from a car when it was stripped to be converted into a racer, then stored in an attic.” 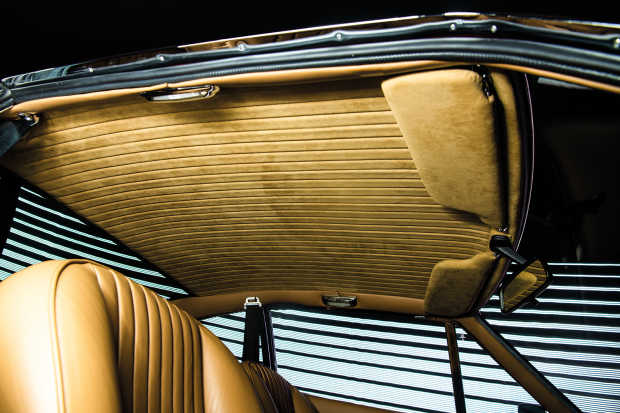 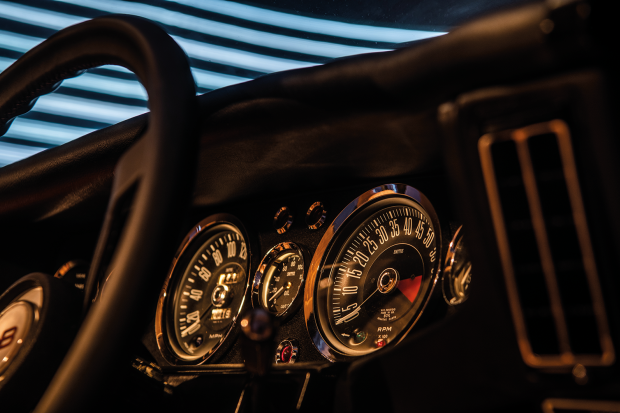 The interior was another stroke of luck, after the original trim was found to be beyond repair.

“What the rats had not enjoyed for lunch was covered in severe mould, and the car smelled unimaginably bad. By chance, I stumbled across an automotive leather supplier who had a complete pallet of new-old-stock Bridge of Weir hides from the early 1970s languishing at the back of his warehouse.

“He had purchased them from an Aston Martin clearout during one of their many financially challenging times, and amazingly they were the same type and colour that would have been used on my car when new.

“I had little choice but to close my eyes and hand over his asking price, then I hung the leather on hide horses at the trim shop for two years to ensure that they were wrinkle-free before passing them on to an Aston Martin-trained trimmer.”

Having had all of the major assemblies refurbished, and stockpiled his giant kit of parts, Currington began the lengthy process of reassembly. 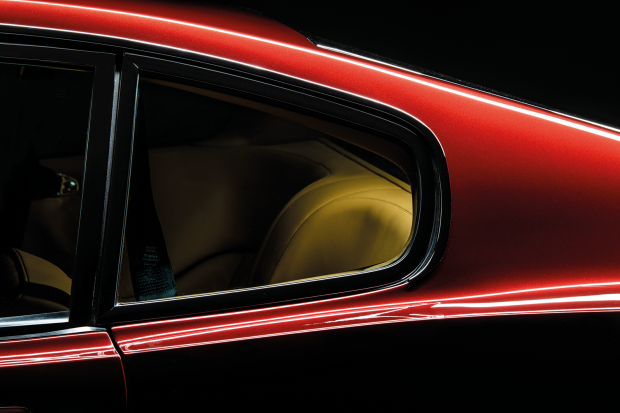 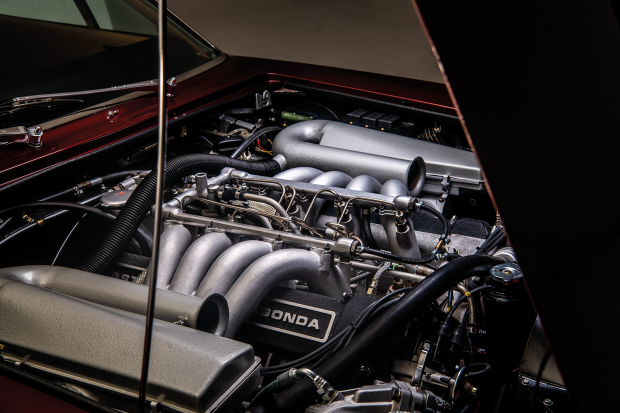 “This is a very complicated car and it took me nearly two years to rebuild after it returned from the paint shop. Often, what appeared to be a simple job could consume hours without success.

“Sometimes, I would have to walk away from a subassembly for 24 hours to prevent me throwing it at the workshop wall; then, the following day, I would start again and finish the task in less than an hour.”

Alcantara replaced the original – and no longer available – brushed-nylon headlining, in one of the few breaks from factory spec, and Currington ordered new front and rear ’screens from Pilkington as a finishing touch: “I also had replacement glass trim clips remanufactured from stainless steel because the original steel variety are prone to corrosion.”

Other tweaks to make the car more usable include polyurethane bushes, discreet electric fans, a period Motorola radio with digital conversion and much-needed air-conditioning – a surprisingly rarely specified option on the DBS.

“I was lucky enough to find an original evaporator unit, which I had professionally overhauled and adapted to run on modern gas,” explains Currington. “This was then installed using factory blueprints to make bulkhead modifications that exactly match how the car would have been produced in 1971.”

“I have a set of correct – and rare as hen’s teeth – Mk1 GKN originals with a lip on the rim and Dove Grey centres,” says Currington, “but these Mk2s with bevelled rim and gold centres go extremely well with the Dubonnet Rosso paint and tan interior, so that’s how I like it.” 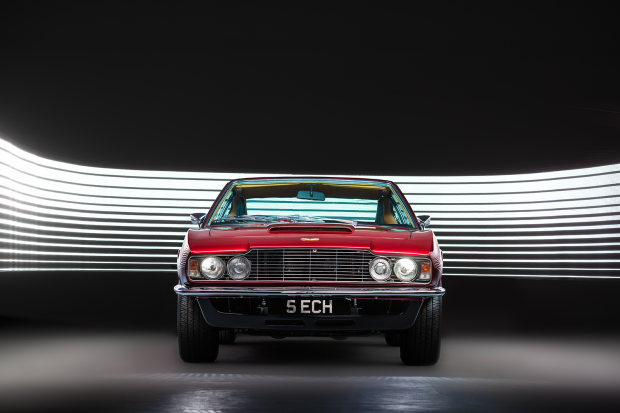 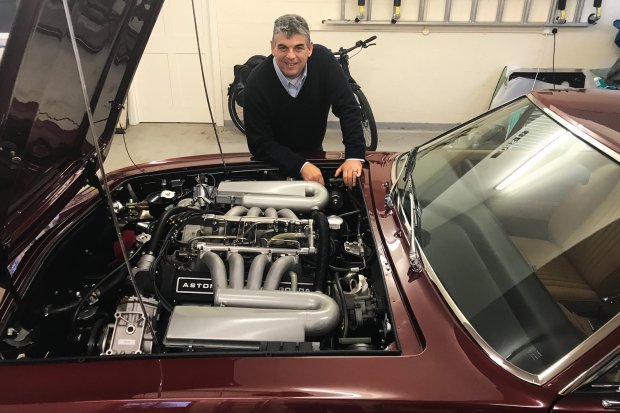 Otherwise, the car is just how it would have looked when it was delivered to Receivers of Wilmslow in April 1971, complete with a CT Fire Extinguisher on the passenger A-pillar and a Lake & Elliott jack in the boot.

Currington’s fastidious care is clear to see in the use of stainless-steel fixings throughout – apart from the load-bearing bolts, where high-tensile steel is used – and it’s no surprise to learn that the DBS has been chosen for several high-profile concours.

Having made its debut in the Dawn of the Supercar class of Flywheel Concours at The Classic & Sports Car Show in June 2018, it was then selected for the prestigious Cartier Style et Luxe enclosure at the Goodwood Festival of Speed.

“I knew I couldn’t have done better with the restoration, but seeing the car receive praise from some of the finest professionals was very rewarding,” smiles Currington. “It took much longer and cost way more than I expected, but has been worth every hour and every penny.” 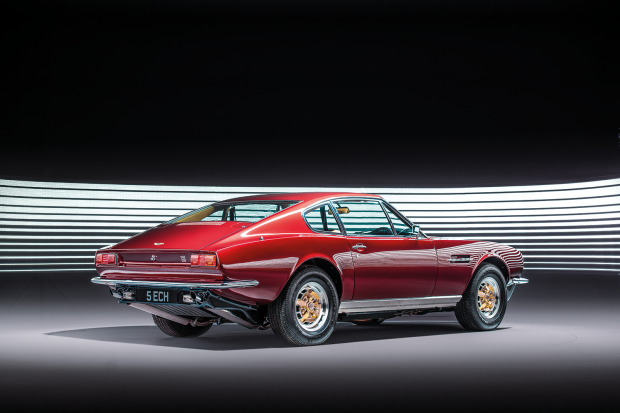 The result of almost two years of work, after it came home from the paint shop

Not that outings have been restricted to the show field, because the temptation to drive a car that was once one of the world’s fastest four-seaters is hard to resist.

“It’s strong, powerful and very well balanced, handling corners with precision and no wallow,” says Currington, “plus the huge Girling brakes do their job very well.

“The V8, with its Bosch mechanical fuel injection, is a pussycat until you give it the beans, when the car rushes to the national speed limit quicker than most modern GTs. The only thing you have to think about is the dogleg ZF gearbox.” 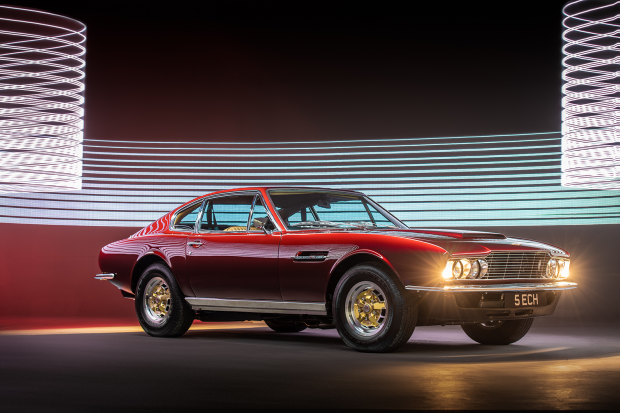 It’s come a long way since that Historics auction!

DBS values have been on a steady climb, to the point where Currington’s £210,000 investment doesn’t look as economically questionable today as it would have five years ago.

But that was never the point.

“The rebuild process and time spent in my workshop are where the passion and pleasure lay for me, I have little interest in the financial gain or loss. It was always bought as a hobby – you don’t expect a refund from the golf course at the end of the year, do you?”

An injection of pace: fuel-injected Aston Martin DBS vs its V8 sibling 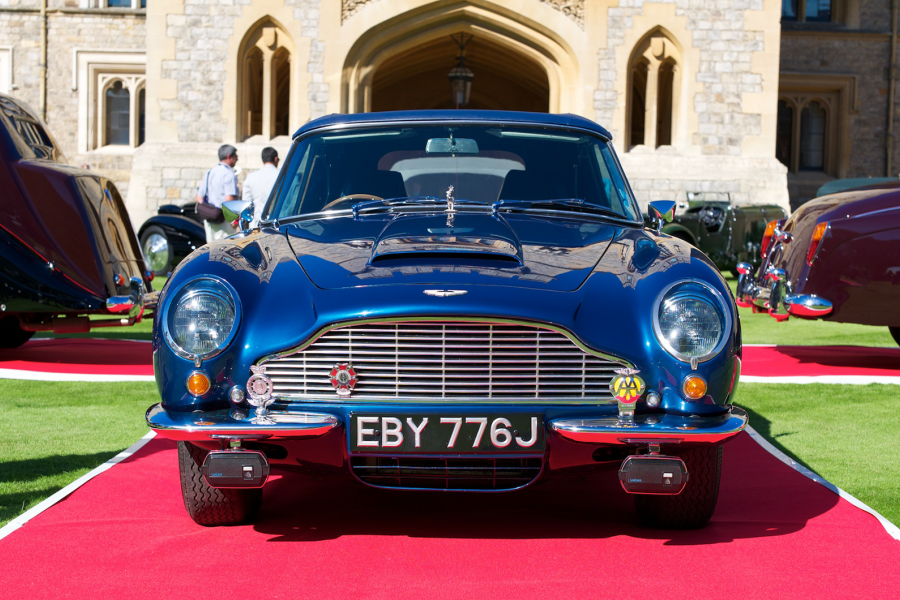 Prince Charles’ Aston to star at Concours of Elegance 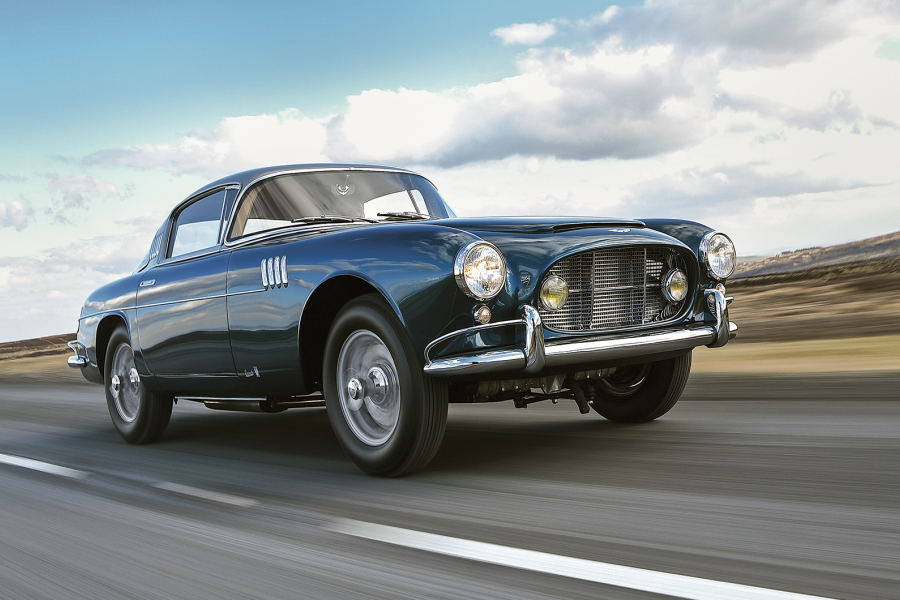 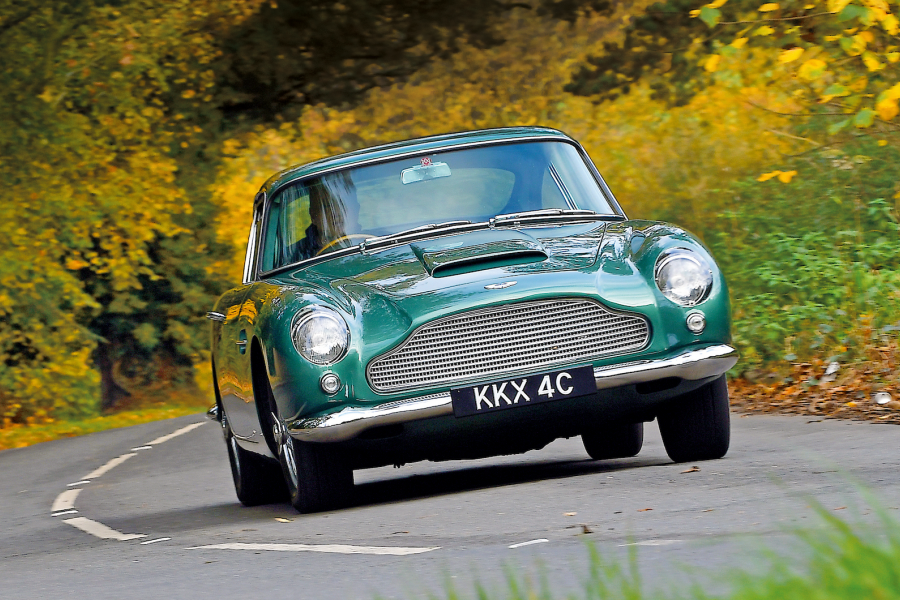 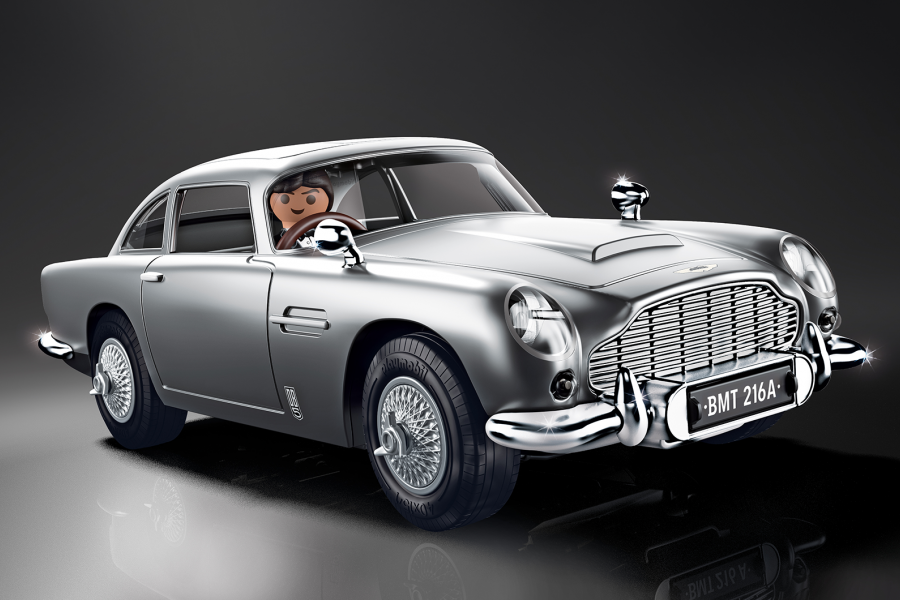