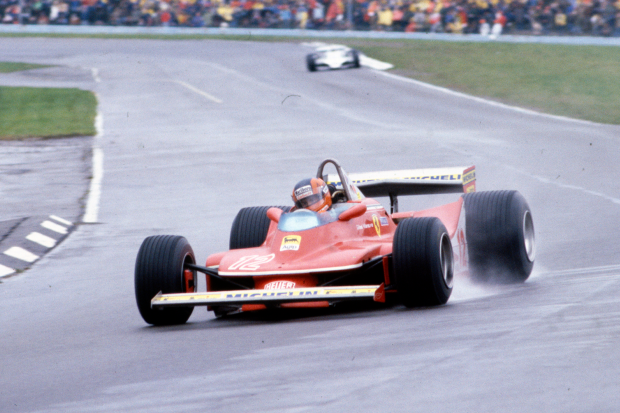 Friday practice at Watkins Glen in 1979 was wet. Very wet. Few of the drivers bothered to go out, but one who did was Jody Scheckter.

The newly crowned world champion later admitted that he thoroughly scared himself en route to posting a lap of 2 mins 11.029 secs in the torrential conditions, and his time put him well clear of the next car.

But it was good enough to be only second fastest in the session. His Ferrari teammate, Gilles Villeneuve, knew that race day was also likely to be wet, so he was another to venture out. Quite apart from anything else, he loved to drive in the rain.

And it was Villeneuve who ended up topping the timesheets. His best lap? It was 2 mins 1.437 secs – more than nine seconds faster than Scheckter. 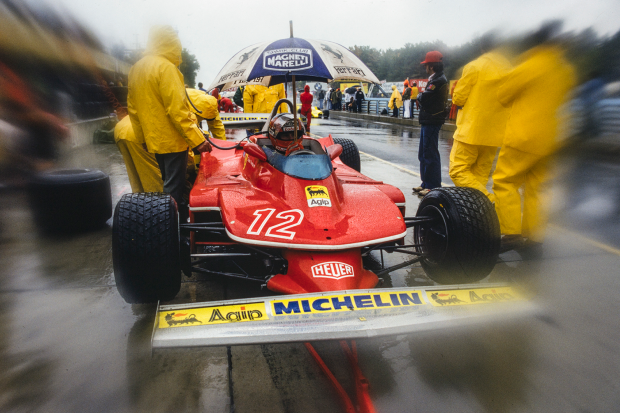 Villeneuve keeping dry at Watkins Glen in his Ferrari 312T4

“Look at him,” said Laffite as Villeneuve splashed past once more. “He’s different from the rest of us. On a separate level.”

While it’s true that two of Villeneuve’s greatest drives came in 1981 – winning in Monaco and Spain in the recalcitrant Ferrari 126CK – it was in 1979 that his legend really took hold.

It was the first of two seasons in which he’d be paired with Scheckter, and Ferrari’s Mauro Forghieri later remembered those years as the happiest he spent at Maranello.

Scheckter efficiently pieced together his championship campaign, but it was Villeneuve who captured everyone’s imagination. 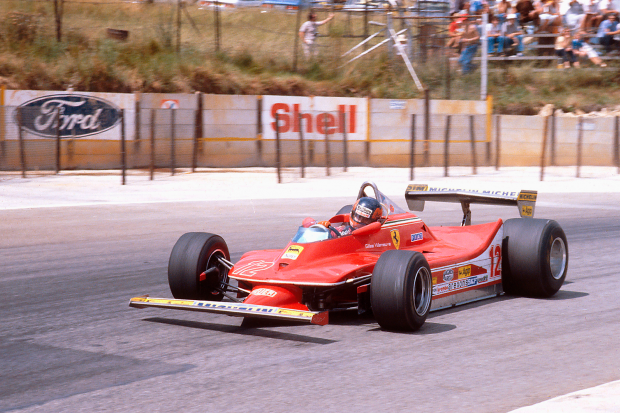 Villeneuve on his way to victory at Kyalami in ’79

In the early part of the season – his second full year in Formula One – the French-Canadian won at Kyalami and Long Beach, but could finish only seventh at Jarama following a spin.

At Zolder, he was caught up in an incident between Scheckter and Clay Regazzoni, and had to pit for a new front wing.

That dropped him to the back of the field, but he was up to third again when the Ferrari spluttered to a halt on the final lap. His pace during a frenetic comeback drive was such that fuel calculations had been rendered meaningless, and he’d run dry.

He failed to finish at Monaco, and then came Dijon. You had to feel sorry for Jean-Pierre Jabouille – a Frenchman winning his home Grand Prix in a French car. And it was historic in another way, marking the first Formula One victory for a turbocharged engine.

As the television footage briefly cut to Jabouille taking the chequered flag, however, BBC commentator Murray Walker summed up what everyone was thinking: “But who’s going to be second?” 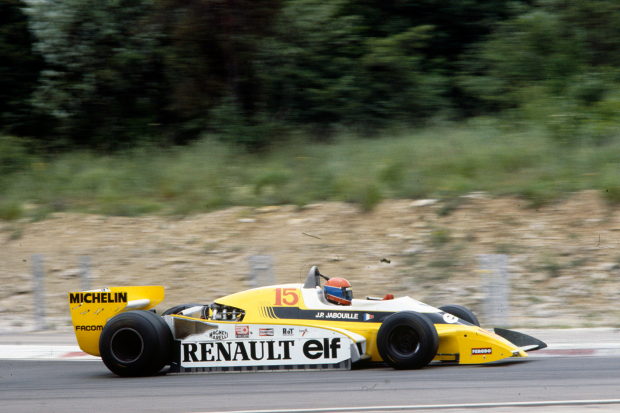 Jabouille (Renault RS10) made history with his win at Dijon, but all eyes were on the battle behind him

It would either be Villeneuve or Jabouille’s Renault teammate, René Arnoux. Villeneuve’s tyres were finished – Scheckter stopped for fresh rubber and came home a lapped seventh – but Arnoux’s engine was suffering from fuel pick-up problems, which levelled the playing field.

With two laps to go, Villeneuve dived to the inside at the first corner and, with smoke pouring from a locked front-left tyre, took second.

Next time around, Arnoux did likewise, but Villeneuve wasn’t about to give way and they went round the long right-hander side-by-side. At the exit they banged wheels and Arnoux – his nose in front – went off the road, which gave Villeneuve a run at him.

They banged wheels again and Villeneuve ran wide, but into a tight uphill right-hander Arnoux made the mistake of leaving an ounce of room and Villeneuve – braking at the very last moment – squeezed through and held on to finish second.

As they crossed the line, Arnoux pulled alongside and the two drivers saluted each other. When they got back to the pit lane, they embraced, and Arnoux still rates it as his most memorable race.

It had been a brief but frenetic battle, and as Nigel Roebuck later wrote, ‘Not a flicker of malice was apparent’ as they duked it out. 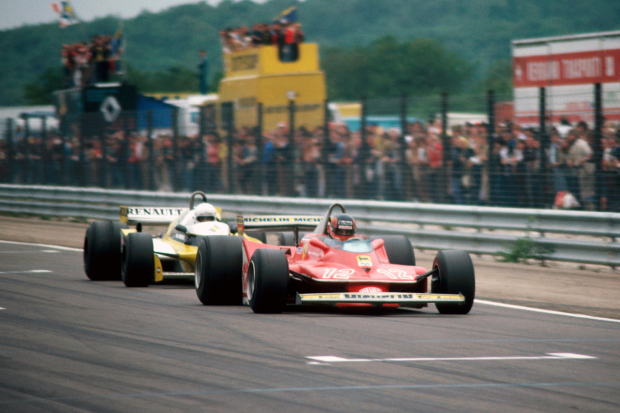 Dijon’s first corner came after a long straight, and it’s worth noting – in these days of the ‘one-move’ rule – that neither Villeneuve nor Arnoux, when they were ahead, moved across as they came down that straight.

There was no blocking, in other words – the inside line was there if the other man wanted it, but if he did, he needed to be very late on the brakes in order to make it stick.

Some of the other drivers, including Scheckter, were not impressed and reprimanded both Villeneuve and Arnoux.

Mario Andretti, on the hand, famously saw it as being “just a coupla young lions clawin’ each other”. 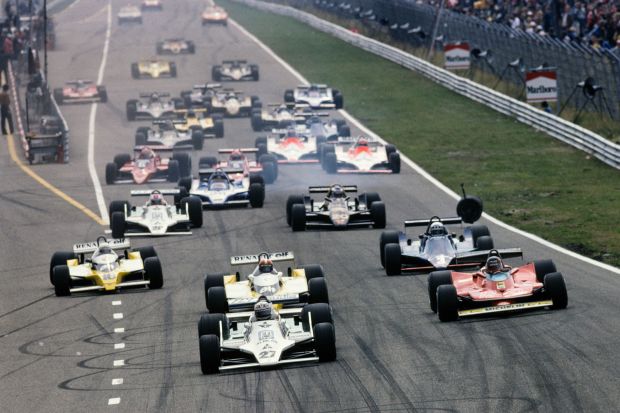 If the old guard was critical following Dijon, it was apoplectic at Zandvoort.

Villeneuve led the early stages from the Williams of Alan Jones, but then picked up a slow puncture in his left-rear, which led to a spin.

The tyre then came apart completely as Villeneuve went into the first right-hander at Tarzan, pitching the Ferrari off the road. But not into retirement. For a few seconds he prodded the starter until the flat-12 burst back into life.

Once more commentating on the BBC, Murray Walker was momentarily lost for words – an exceptionally rare occurrence. 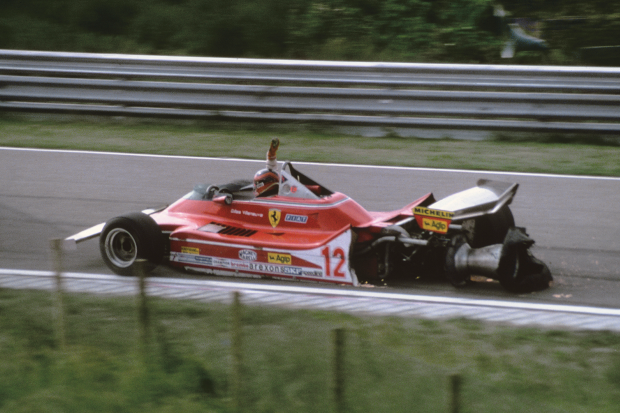 There was almost a whole lap to complete before Villeneuve could get back to the pits, and it was a lap that was conducted at an unlikely rate.

Eventually, the offending wheel partially broke away and was being trailed behind the car, but Villeneuve thought it had come off completely and carried on, the right-front tipping into the air as the Ferrari dipped on to its shattered left-rear corner under acceleration.

“And he’s doing a wheelie as he’s going down the straight!” said Walker, but there was nothing the mechanics could do once the remains of the Ferrari arrived in the pit lane. 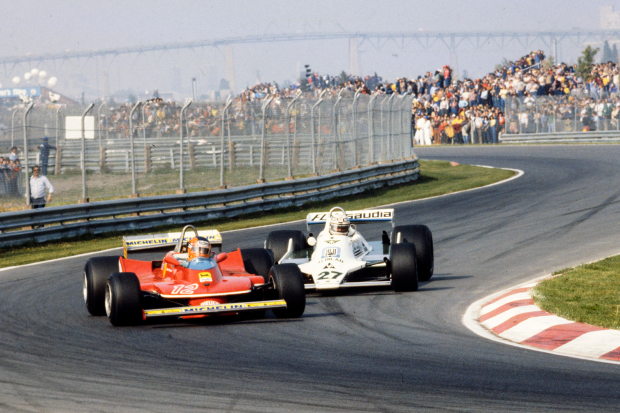 The championship battle came to a head at Monza, where Scheckter led away and Villeneuve followed him across the line in second.

It was Scheckter’s title, then, but for the final two races in Canada and America, it would be Villeneuve vs Jones.

In Canada, the Ferrari and Williams fought a battle royal before Jones slipped past after 50 laps and opened up a small advantage.

By that stage in the season, the Australian’s car was undoubtedly the faster of the two, but Villeneuve’s genius clawed back most of the deficit.

“As soon as I backed off a fraction,” Jones later recalled of that Canadian race, “there was that bloody red sh*tbox in my mirrors again. Villeneuve was unbelievable like that – I mean, he never gave up.” 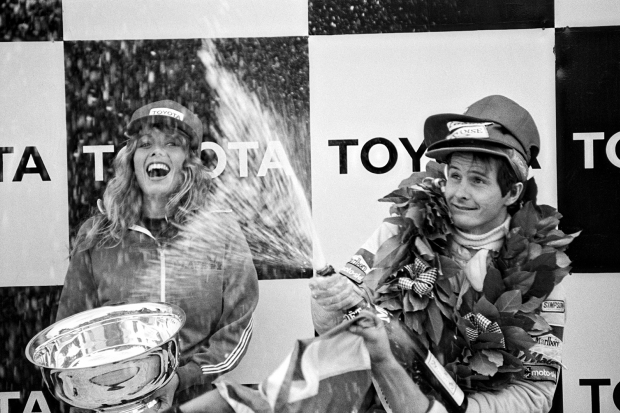 Villeneuve celebrates a fantastic victory at the 1979 season finale

The final race was at Watkins Glen, where Villeneuve put on that virtuoso performance in practice.

He ended up qualifying third, but stormed into the lead at the start and once again fought it out with Jones in wet-dry conditions until the Williams pit crew failed to properly secure a wheel at a pit stop and it came off when Jones rejoined the circuit.

That left Villeneuve untroubled out front, but he had to nurse the Ferrari through its final few laps due to falling oil pressure. It lasted long enough for him to take victory, though, proof that mechanical sympathy could be part of his driving make-up along with raw aggression.

Villeneuve was in Formula One for only four full seasons, during which he won six races and took two pole positions.

And there’s the problem with statistics. As with Jochen Rindt, Ronnie Peterson or Jean Alesi, numbers do nothing to reflect the excitement that they brought to the sport and the passion that they evoked in enthusiasts.

In 1979 alone, Villeneuve created more memorable moments and more iconic images than most drivers do in a lifetime. Even 40 years on, his legend shines as brightly as ever.