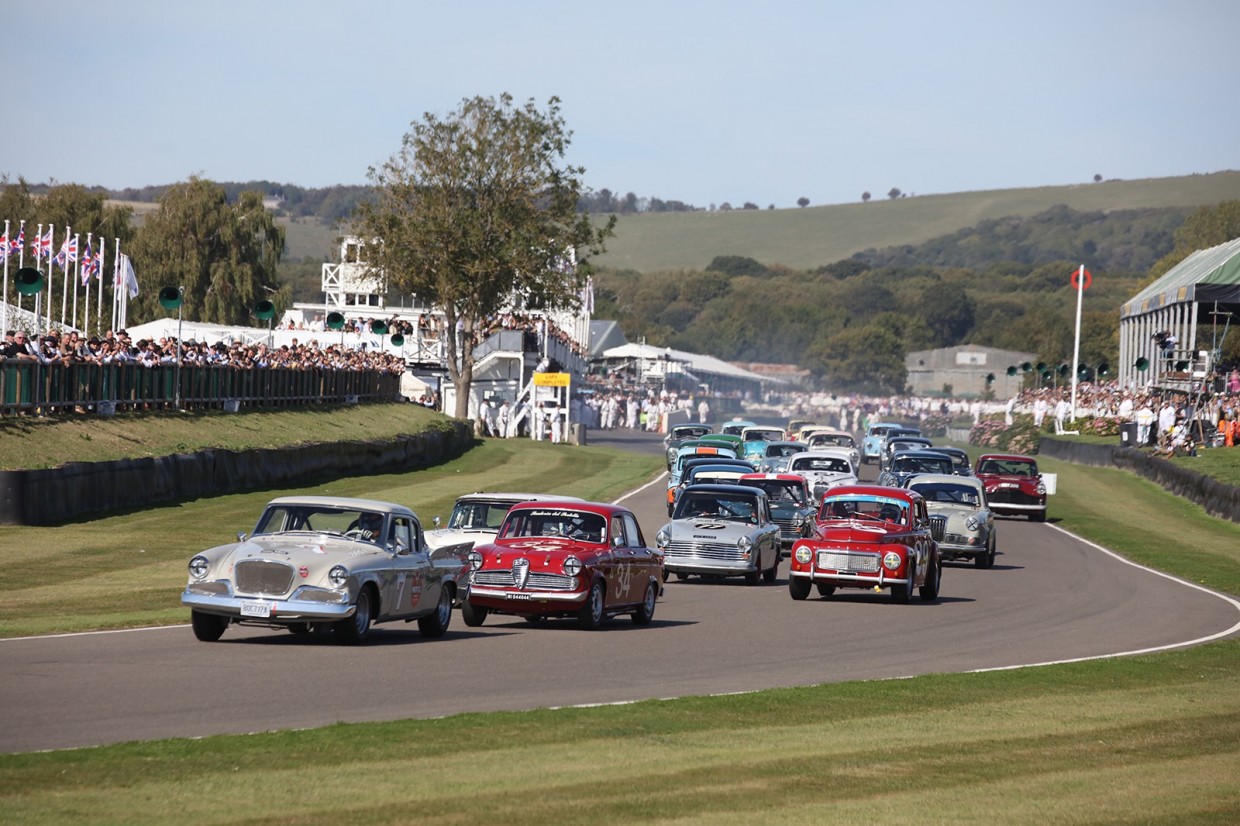 Robert Barrie and Nick Swift opened Saturday's racing action with a spectacular battle in Lotus Elan 26R and Mini Marcos, the Norfolk sports car edging the Fordwater Trophy with the Marcos snapping constantly at its heels. Poleman and debutant Josh Files slid his way to third, running wide on the opening lap but enjoying the perfect view of the lead fight. Fourth was fought as hard as first, as James Cottingham, headed Tim Layzell on debut and Mark Sumpter after trading places for the entire 25-minute encounter.

Restarted after a lap one red flag, part one of the St Mary’s Trophy was dominated by Karl Wendlinger in the Studebaker Silver Hawk. Starting from pole in the David and Goliath contest, Romain Dumas (Ford Thunderbird) was his only real threat and with the Thunderbird out, Wendlinger won by 5.6 sec on his Goodwood debut, from a hard-charging Alfa Romeo Giulietta Ti piloted by five-time Le Mans winner Emanuele Pirro.

And it was a similar story in the Goodwood Trophy, where polesitter Gareth Burnett (Alta 2 Litre Single Seater) built a lead from Mark Gillies in ERA R3A before the latter retired, Burnett victorious by almost 40 secs.

There was more drama in the Glover Trophy, which belied Andy Middlehurst’s flag-to-flag win in the Lotus-Climax 25. Middlehurst pulled a good lead from pole, Joe Colasacco (Ferrari 1512) and Timothy De Silva (Lotus-BRM 24) dicing for second. Colasacco retired and De Silva did well to survive an off but later also retired. A slippery track caused problems for many including the leader, but Middlehurst recovered to win by over 10 secs.

The day's final race was the Sussex Trophy for World Championship sports cars and production sports-racing cars of a type that raced 1955-1960 – and it was well worth staying for.

Roger Wills (Lotus-Climax 15) was pushed from the off by Sam Hancock (Ferrari 246S Dino), Jon Minshaw (Lister-Jaguar ‘Knobbly’) never far behind, the latter pair tussling as Wills started to make a break, David Hart (Lister-Jaguar ‘Costin’) challenging for a podium spot. Geraint Owen’s crashed Lister-Chevrolet ‘Knobbly’ brought out the safety car and when racing resumed with three and a half minutes remaining, it was tight at top with Wills ahead and claiming victory, Minshaw almost snatching second on the line after brilliantly close racing with Hancock.

12 of the best classics for sale at Bonhams’ Revival auction