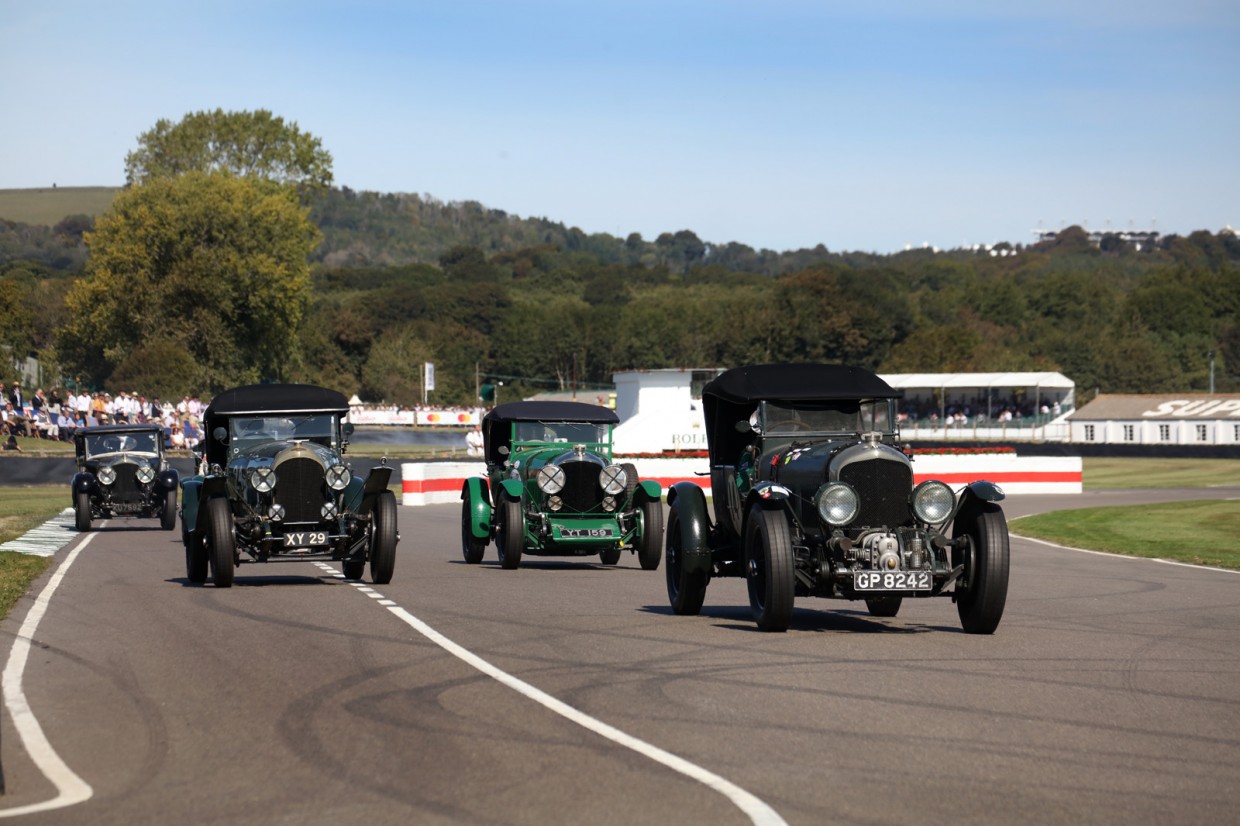 It was four abreast into Fordwater for the first time as Sunday’s racing kicked off with the 500cc Formula Three cars of the Earl of March Trophy at the 22nd Goodwood Revival.

After falling to third at the start, Sam Wilson fought through to win the Richmond & Gordon Trophies in his rear-engined Lotus-Climax 18. Nick Padmore (Lotus-Climax 16) fell out of contention with mechanical issues and the hard-charging Gary Pearson gave his best in the Cooper-Climax T53, but couldn’t deny Wilson victory.

Bentley’s centenary celebration enjoyed another memorable outing in the Brooklands Trophy which all entrants with roofs had to start with them raised, before lowering them at staggered intervals with the aid of a single mechanic, in the style of the early Le Mans racers, an interesting addition to the programme. Martin Overington came from fourth on the grid to win in his 1929 4½ Litre ‘Blower’.

The meeting’s feature race was the hour-long RAC TT Celebration, where a safety car caused by the crashed Shaun Lynn/Karun Chandhok AC Cobra within the pit window proved pivotal. Racing resumed with just over half an hour remaining and with some cars having pitted before the safety car and the pit window closed during the safety-car period, it was a three-Cobra battle for the lead, Oli Bryant against sports-car aces Romain Dumas and André Lotterer who were nose-to-tail, Lotterer seizing the opportunity to pass at Fordwater and never looking back in the car he shared with Chris Wilson, the Bryant/Darren Turner later retiring, Dumas second in the Cobra started by Bill Shepherd, 12.5 secs adrift.

For part two of the St Mary’s Trophy it was another little versus large contest with close racing throughout, the ever-sideways Grant Williams Mk1 Jaguar eventually heading to the flag side-by-side with Mike Jordan’s Austin A40, Williams edging it before his qualification gave Jordan victory from Charles Rainford’s Volvo PV544S. When combined with yesterday’s result, Nicolas Minassian/Jordan won, from the John Cleland/Rainford Volvo.

Chandhok dominated the Whitsun Trophy from behind the wheel of John Bladon’s McLaren-Chevrolet M1A, despite a safety-car period when the similar car of Andrew Wareing clattered into the chicane.

And so finished another wonderful Goodwood Revival – we’re looking forward to the 2020 edition already!

12 of the best classics for sale at Bonhams’ Revival auction